The Russians have installed a GIANT telescope at the bottom of Lake Baikal. Why?! 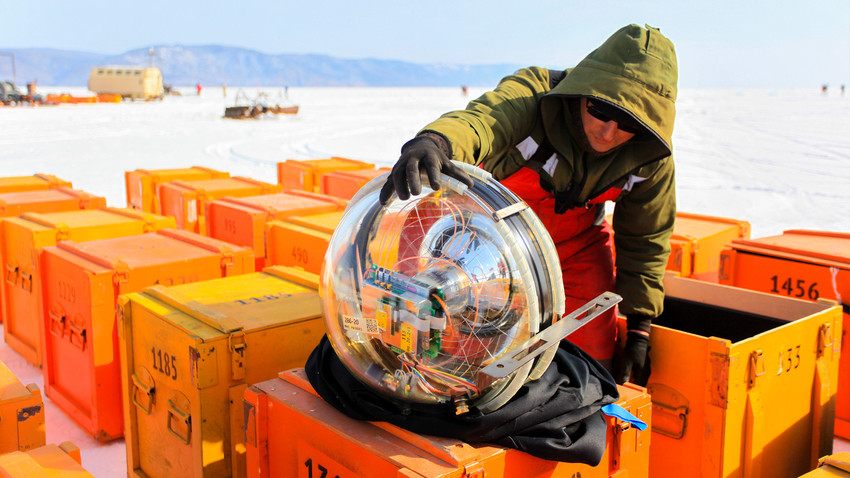 Kirill Shipitsin/Sputnik
Every winter, physicists have been lowering glass spheres into Lake Baikal to build a neutrino telescope to find out what was happening, and where, in the Universe millions and even billions of years ago. Now, this gigantic installation has been put into operation. And its possibilities boggle the imagination!

It is March. A tractor, with a huge circular blade the height of a human, is crawling along the ice of Lake Baikal. The giant cutter slices through the one-meter-thick ice, right down to the open water beneath. Nearby, a dozen people in orange overgarments are straightening a super-long cable with glass spheres containing sensors attached to it. All this is to be lowered to a depth of between 750 and 1,300 meters! 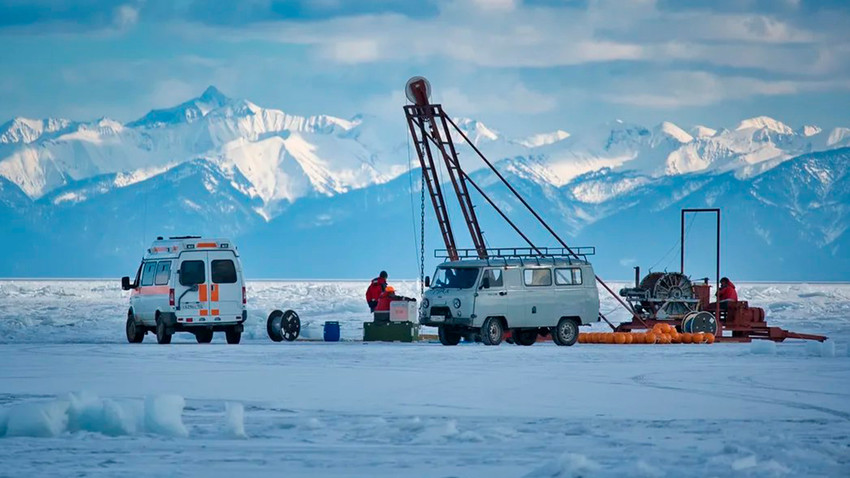 This deepwater “garland” has been under construction since 2015. Every winter and early spring, scientists and engineers have been arriving here year after year, in order to install clusters of the biggest neutrino telescope in the world - the Baikal-GVD [Gigaton Volume Detector]. In mid-March 2021, it was officially put into operation and researchers launched experiments that could overturn our whole understanding of the Universe.

Well, first things first. Neutrinos are ultra-light “ghost” particles permeating the Universe and everything in it. While you are reading this line, quadrillions (1 followed by 15 zeros!) of neutrinos, originating in the center of the Sun eight minutes earlier, will have already passed through you. But you won’t even have felt it and this is another important feature of neutrinos.

Neutrinos have very little interaction with matter. For instance, no more than one out of 10¹⁶ solar neutrinos will hit even one atom of the human body. Elementary particles are semi-transparent to one another - they can pass straight through one another and not experience a collision (not interact). It took scientists 26 years to detect a collision for the first time and confirm that neutrinos don’t just exist in theory. That was back in 1956. Admittedly, humans haven’t made much progress in our knowledge of neutrinos since then. 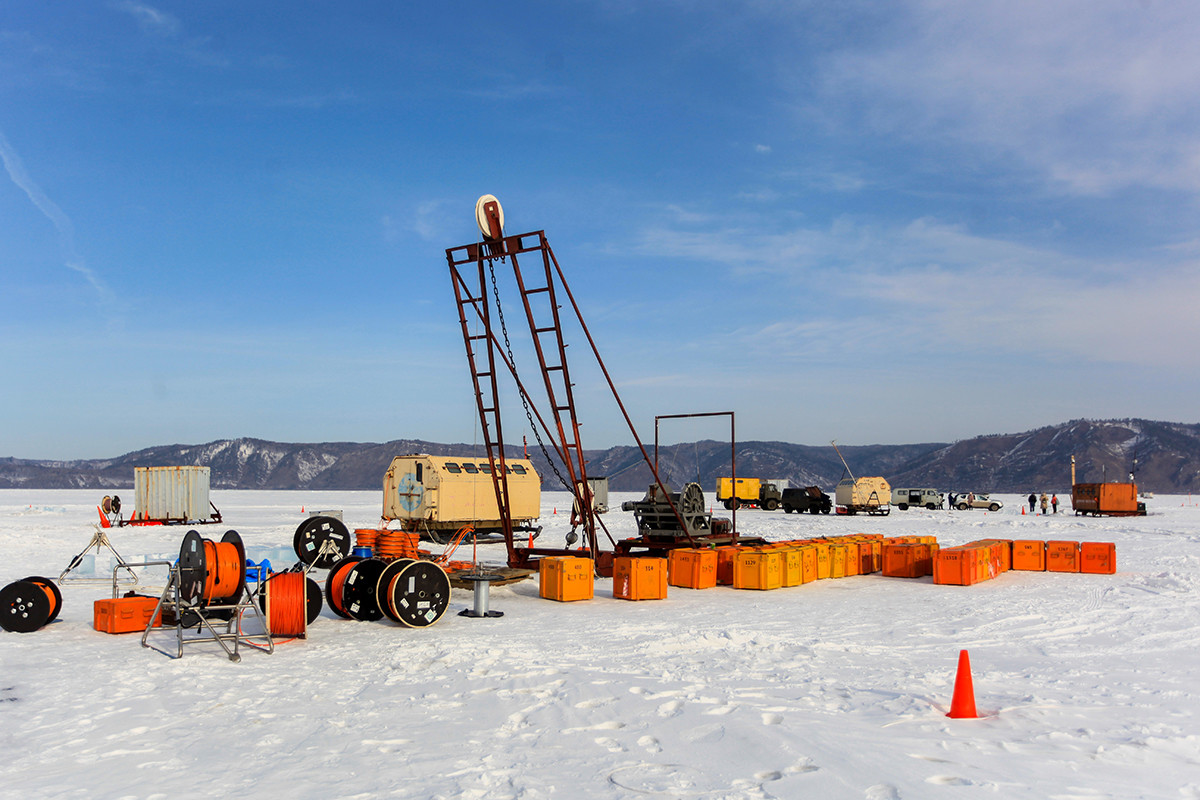 All we know is that neutrinos are insanely light (even the heaviest neutrino weighs millions of times less than an electron) and that the nature of their origin is different. Neutrinos are continuously “born” in the Sun, inside the Earth, in the atmosphere, in nuclear reactors and inside emerging or dying galaxies, stars and other astrophysical sources. 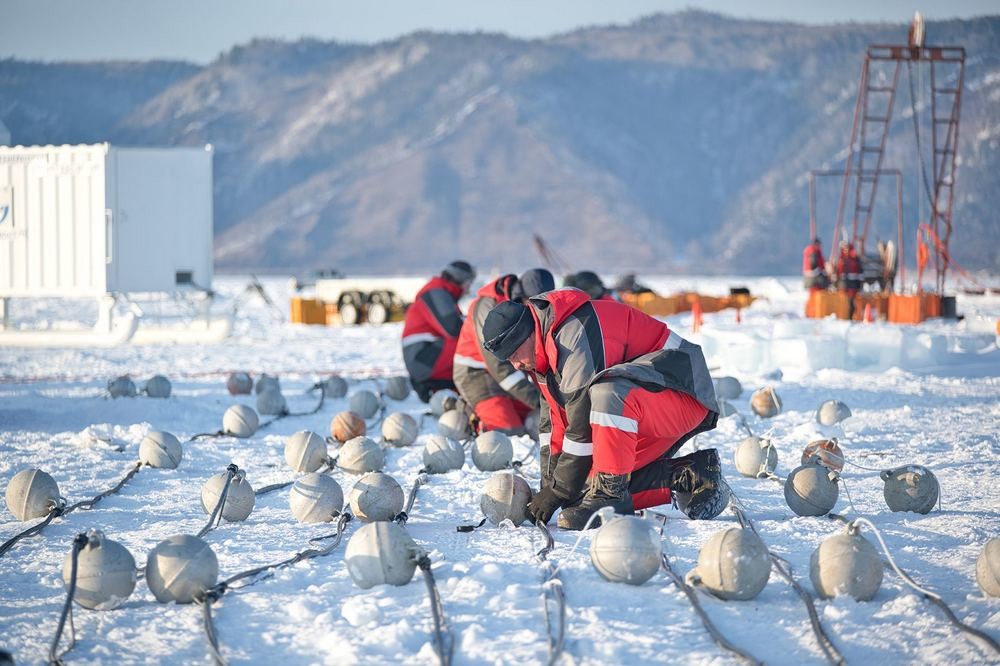 The Baikal telescope is intended to register and study ultra-high energy neutrino flows - i.e. those that have arrived from deep space - and allows all other varieties to be screened out. These quite rare “space messengers” can tell us what happened with our Universe, how it evolved and how galaxies, dark matter and black holes were formed. In particular, it was neutrinos that were the first to tell scientists about the 1987A supernova stellar explosion in the Large Magellanic Cloud before astronomers saw the optical flash. 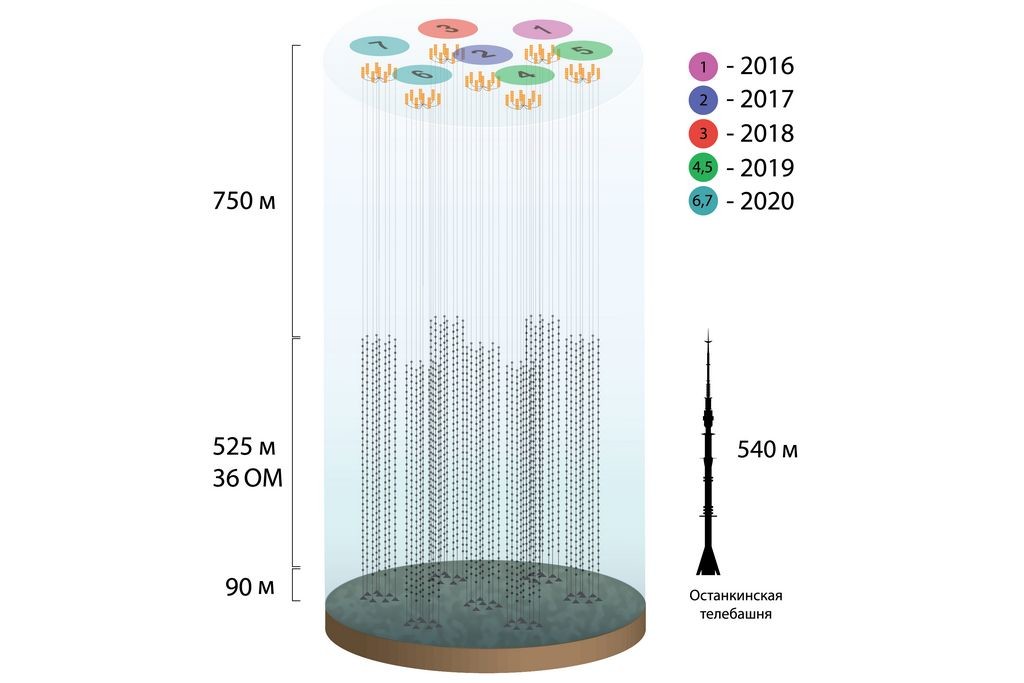 No other particles are capable of this. On their way to Earth, all electrically charged particles (protons and electrons) are significantly deflected from their path by magnetic fields, making it impossible to determine what their source was, while particles of light - photons - may end up not escaping from the dense and heated regions of the Universe, or escaping in a substantially altered state. The uncharged neutrinos do not react to magnetic fields and carry information “from the scene” and are not swallowed up by interstellar dust. Thus, the study of neutrinos opens up a new line of inquiry for the study of the Universe and a strikingly high-precision one at that. They are already being described as a gateway to a “new physics”. Moreover, no other method of observation - from Earth or from space - can look “so deep” into the Universe.

What does it look like? And why Lake Baikal?

Even in the last century, scientists had understood that a neutrino could be “captured” and its direction of travel determined with the help of sensitive photodetectors - using the level of intensity of a bluish glow (the Nobel Prize was awarded for this in 1958). Light-sensitive detectors can track the weak bursts that occur when a neutrino interacts with matter. 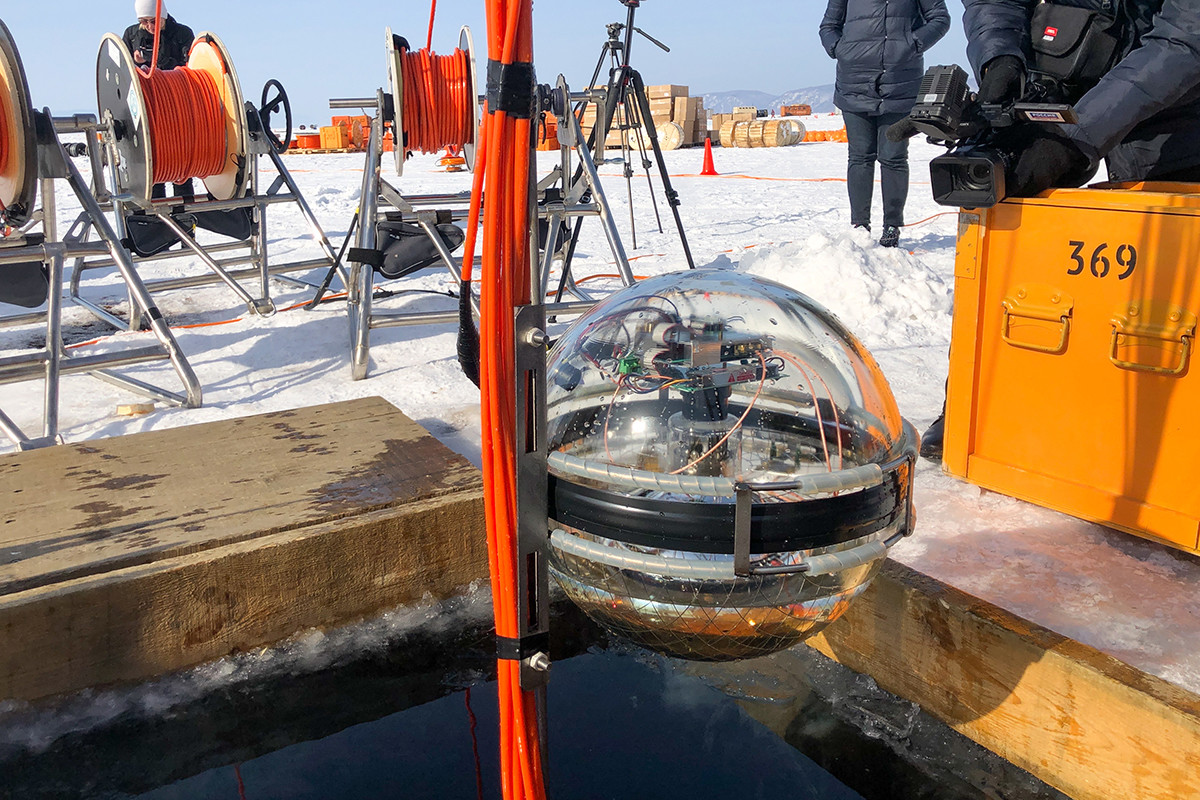 But to register an effect, hundreds of photodetectors are required, as well as a large volume of an extremely transparent substance that the neutrino can interact with. How could such a detector be constructed? And where could such an enormous volume be placed? A revolutionary idea was put forward in 1980 by a Soviet academician named Moisey Markov: He proposed that a multitude of photodetectors be immersed in natural reservoirs of water and then it would simply be a question of waiting for the neutrino itself to strike.

The biggest and most famous installation of this type is the IceCube neutrino telescope. It is literally an “ice cube”, one cubic kilometer in volume, with photodetectors embedded in the Antarctic ice. 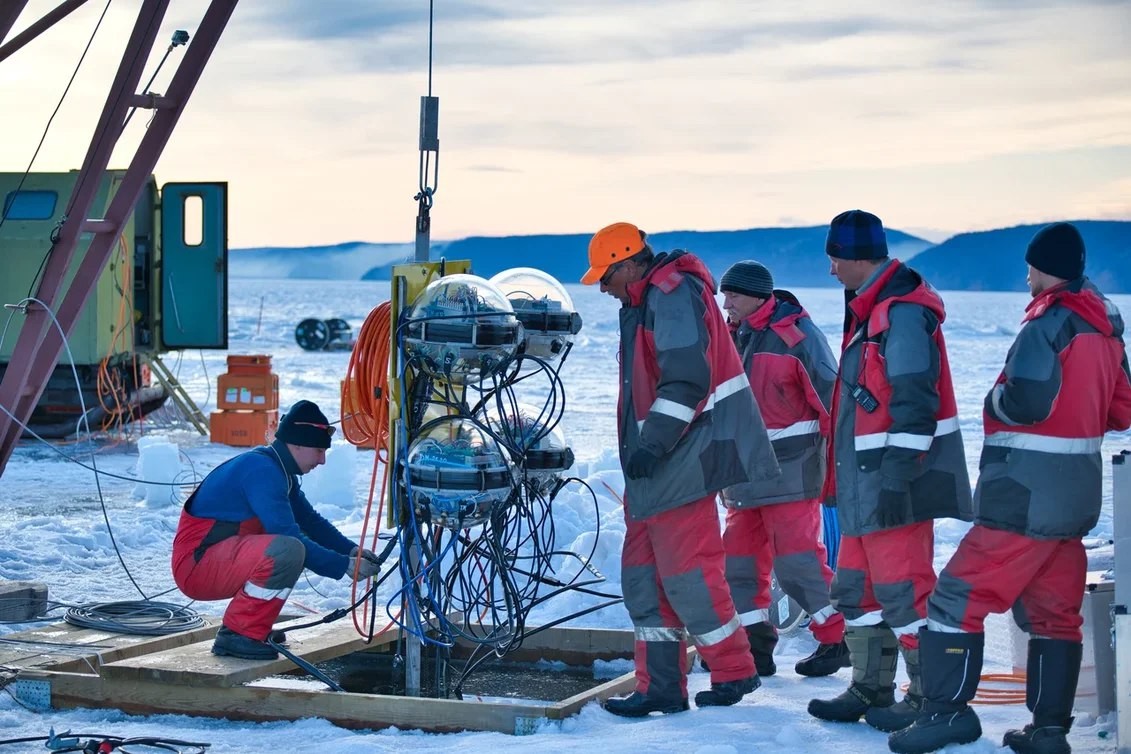 At Baikal, the first neutrino telescope was built in 1993 and was called the NT-36. For the first time, it was possible to register a neutrino arriving at the installation from below - after passing through the Earth. But, the telescope became obsolete and outdated and was no longer viable in terms of size: it was simply too small to allow further progress to be made. 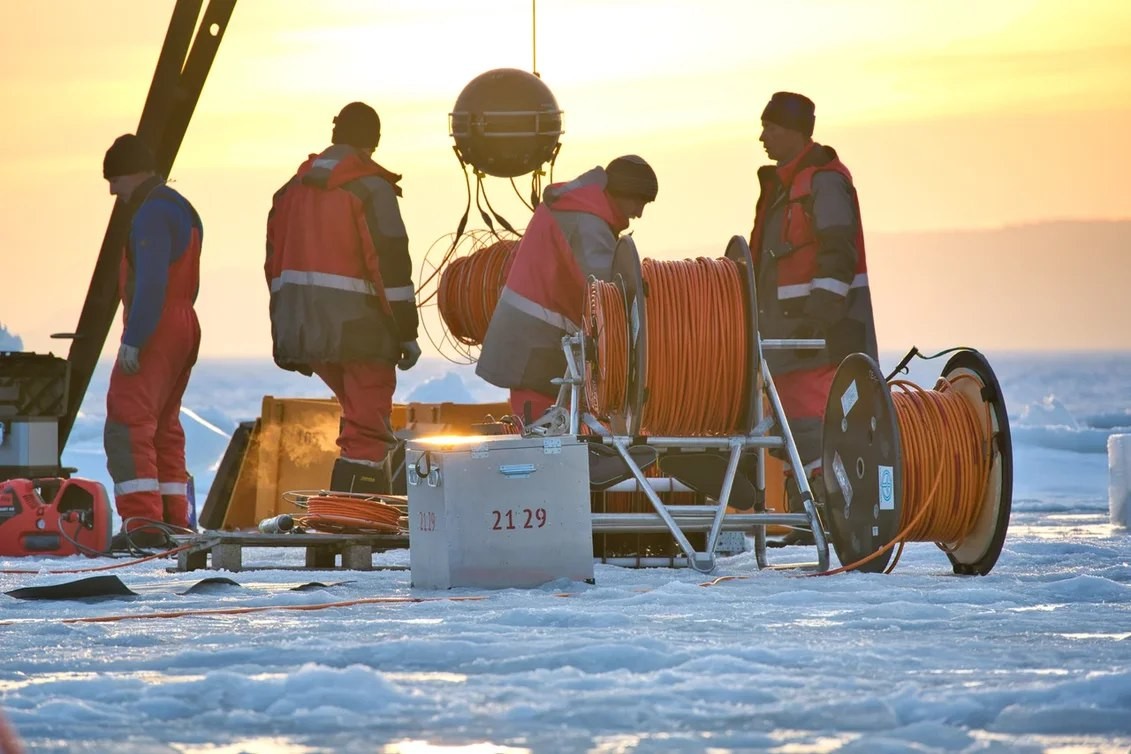 It was then replaced by the modern Baikal-GVD array, which was built by an international group of physicists, led by the Russian Academy of Sciences Institute for Nuclear Research in Moscow and the Joint Institute for Nuclear Research at Dubna. It consists of 288 optical modules on eight vertical strings. Thus, the neutrino telescope has effectively become the tallest structure in Russia. It’s just that it’s underwater and 3.5 km from the shore!