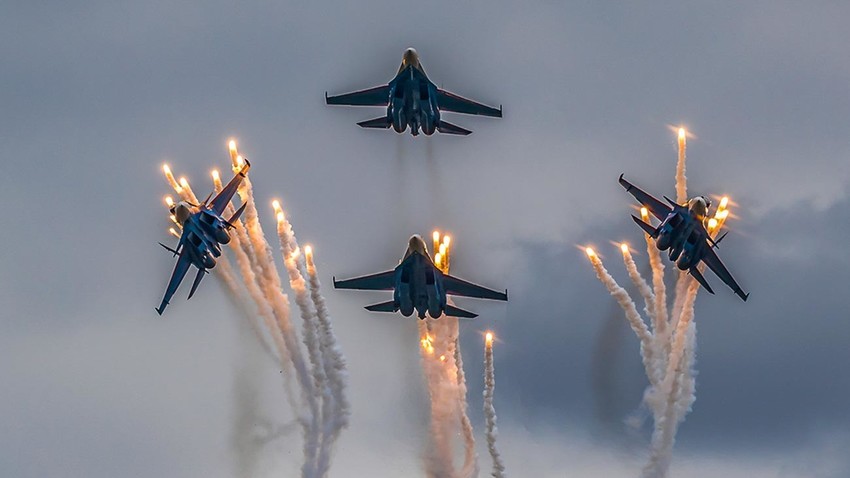 MOD Russia
This team became the first in the world to perform top class aerobatics and win competitions in “heavy” fighter jets against the “light” ones.

In 2021, the ‘Russian Knights’ celebrate their 30th anniversary. A unique aviation aerobatics group that performs flights in heavy fighters, all these years worthily represents the Russian Aerospace Forces around the world, demonstrating unsurpassed flight skills and outstanding capabilities of aircraft technology. And, since 1993, the ‘Russian Knights’ have been permanent participants of International Aviation and Space Salons.

Now, 30 years later, the whole world knows them. They represent the highest achievements of the Russian aerobatic school and are regular participants of the world’s largest air shows. The group was founded in 1991 and is based in Kubinka, near Moscow. 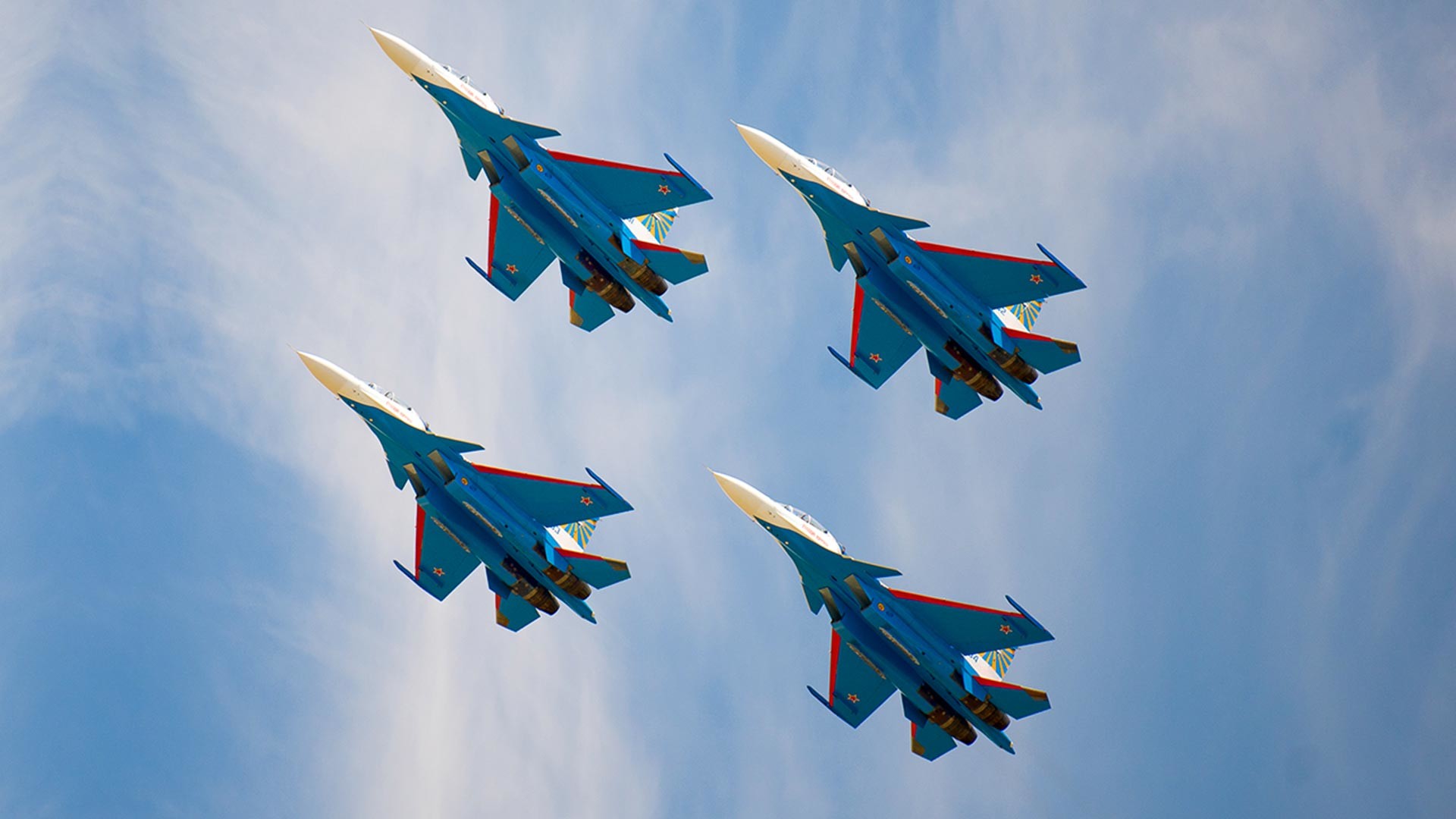 “Their first planes were Su-27 fighters. The pilots began to master the new equipment and soon began training flights as part of a pair, three and then four cars in the “diamond” formation. The uniqueness of the group was that the ‘Russian Knights’ performed aerobatics on serial models of combat vehicles, regularly confirming the skills of military pilots,” says Vadim Kozyulin, a professor at the Academy of Military Sciences.

The real sensation was the performance of the ‘Russian Knights’ in the fall of 1991 in the UK at the Scampton Air Base, after which a series of triumphant performances at aviation festivals and air shows around the world began. The ‘Russian Knights’ were applauded by admiring audiences in the UK, USA, France, the Netherlands, Canada, Belgium, Slovakia, Luxembourg, China, the United Arab Emirates, Finland, Bahrain, India, Hungary and other countries. 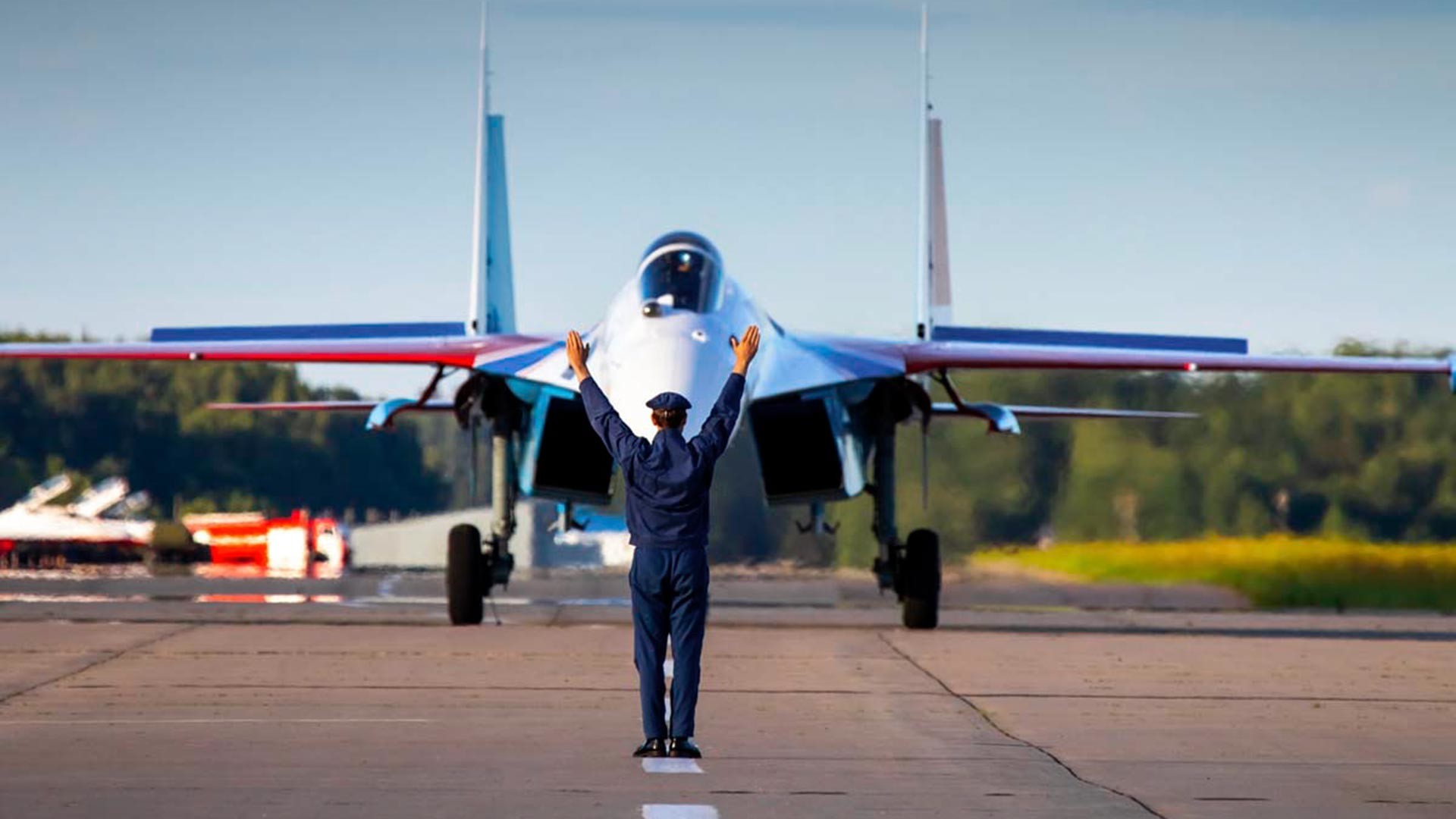 The jets the team used

During its history, the ‘Russian Knights’ have mastered group and single aerobatics on multi-purpose high-maneuverable Su-27P, Su-27UB and Su-30SM fighter jets. In November 2019, the air group received the latest multi-purpose Su-35S fighters and, in 2020, Knights received four more such machines. At the moment, the group is fully equipped with modern aircraft equipment and remains the “business card” of the Russian Aerospace Forces (VKS), continuing the best traditions of the Russian school of aerobatics and constantly improving their skills. 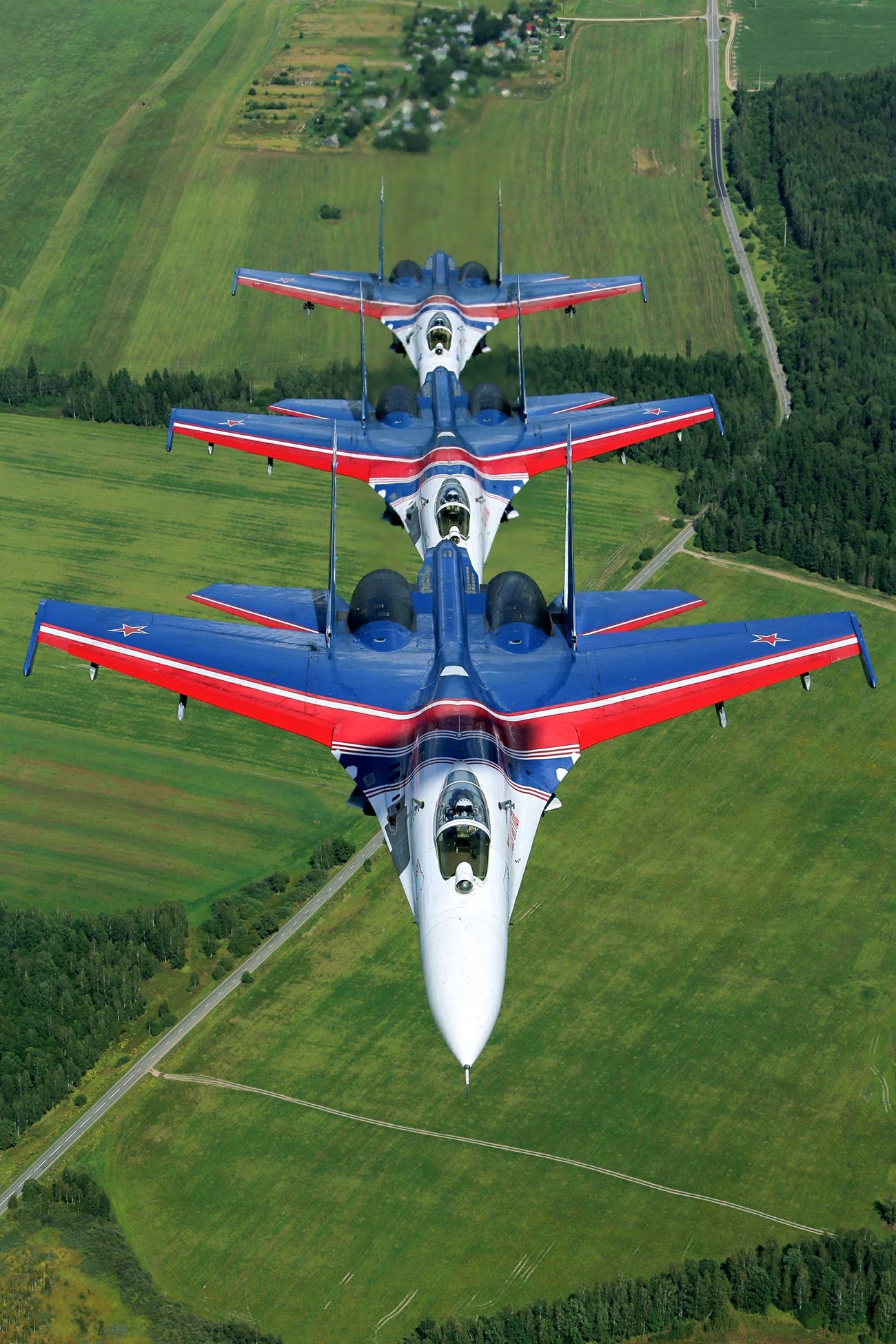 In July 2020, in Kubinka, the ‘Russian Knights’ conducted unique flights with the performance of complex figures of group and single aerobatics in Su-27, Su-30SM and Su-35S aircraft. For the first time, three types of aircraft were in a single formation, the aerobatic program was performed at set intervals and distances of less than three meters between the aircraft.

The ‘Russian Knights’ performed for the first time at the MAKS International Aerospace Salon in 1993. Even low clouds did not prevent the ace pilots from demonstrating their phenomenal skills by performing aerobatics at extremely low altitudes. Since then, the group’s participation in the MAKS flight program has become one of the iconic traditions of the air show. Gradually, thanks to the increase in the number of participants and the growth of the business component of the salon, the improvement of the quality of the infrastructure and the increase in the area of the exhibition pavilions, MAKS rightfully took its place among the largest air shows in the world. And, of course, this happened also thanks to the unique program of flight shows, of which the ‘Russian Knights’ are an indispensable participant. 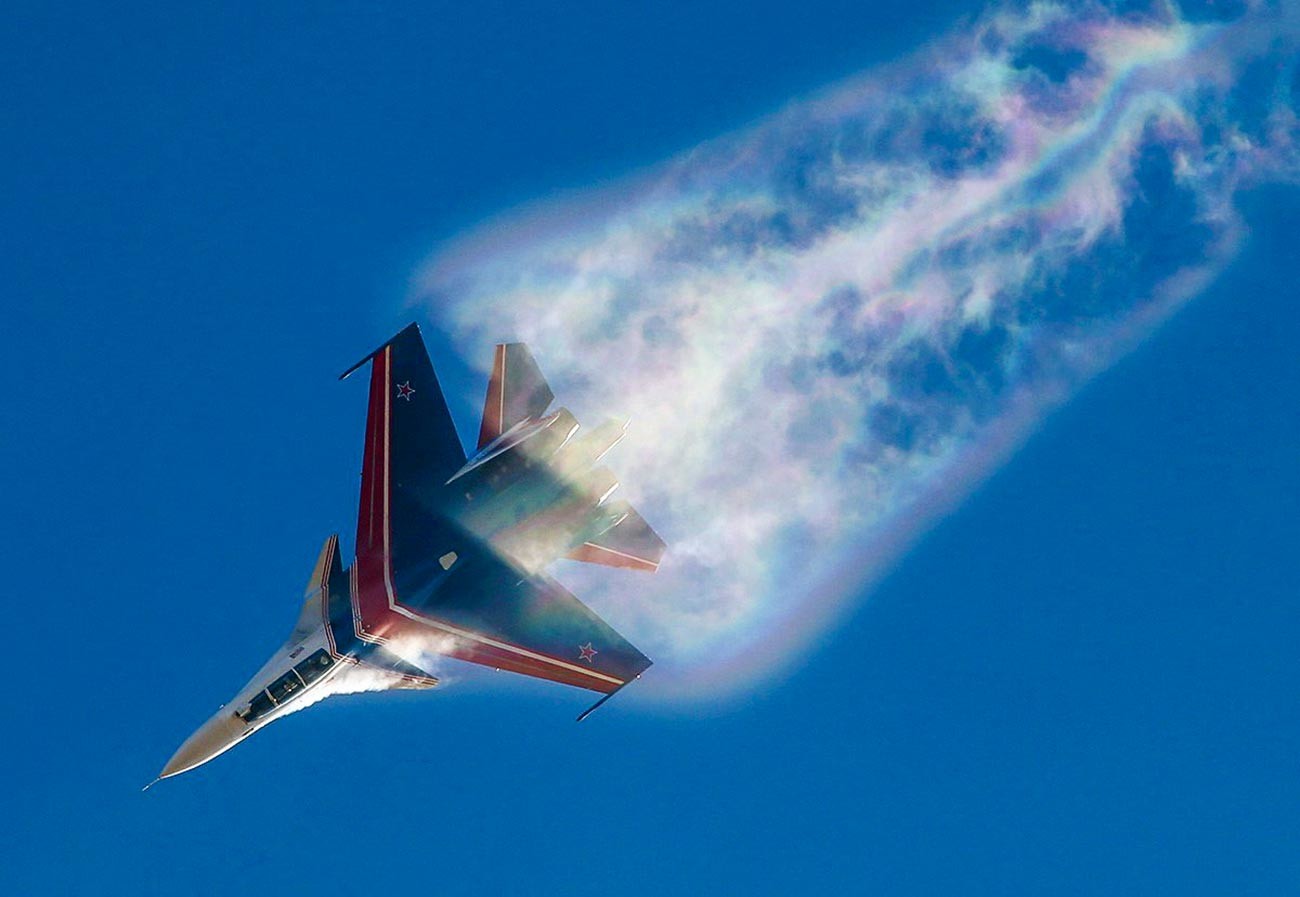 In 2004, the program of demonstration shows included a unique element – a joint flight of the ‘Russian Knights’ and ‘Strizhi’ aerobatic teams, consisting of nine aircraft (five Su-27 and four MiG-29) in the ‘rhombus’ formation with the performance of a full complex of aerobatics. In the same year, the group successfully demonstrated it at the International Festival of Aerobatic Groups in Zhukovsky.

A significant event in the history of the aerobatic team was MAKS-2007, when, for the first time in the history of world aviation, a horizontal “barrel” was made in a group of nine combat aircraft, called the ‘Cuban Diamond’, due to its shape and uniqueness. 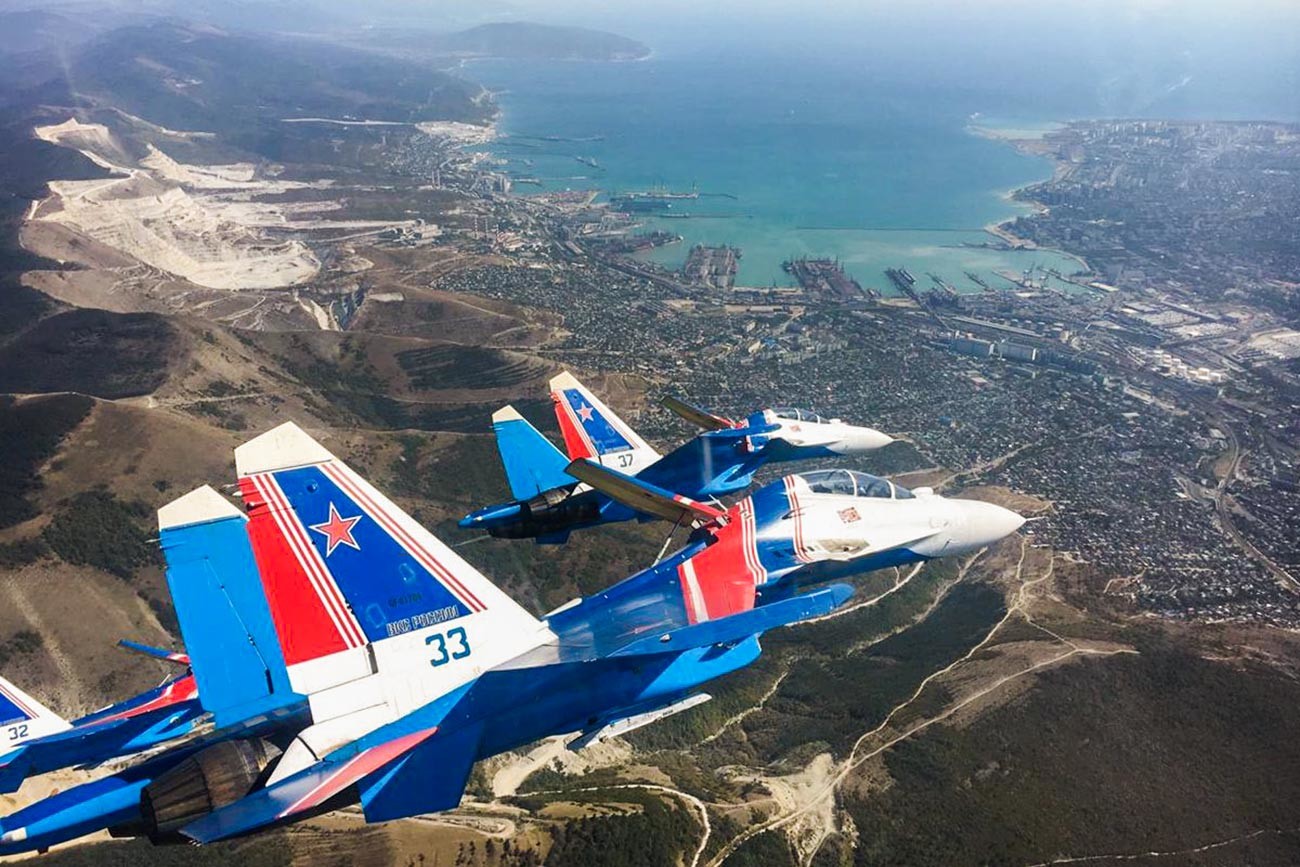