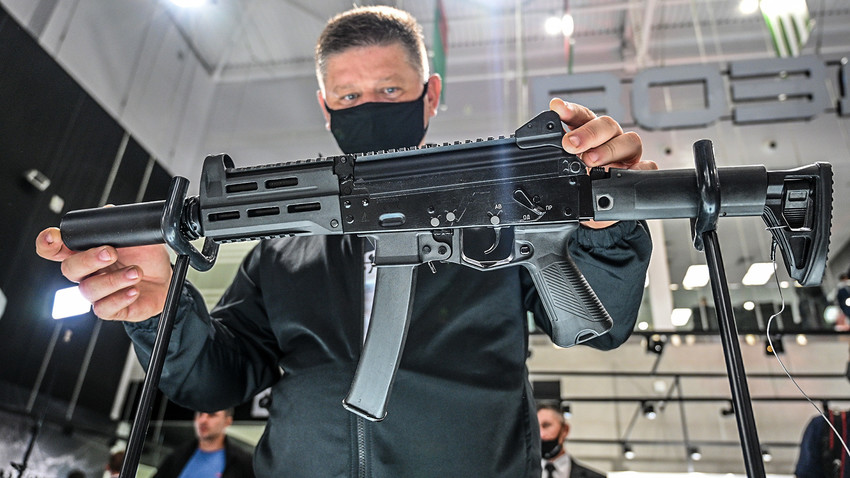 Ramil Sitkov/Sputnik
This weapon can be concealed beneath outerwear and has a fire rate higher than standard issue army AKs.

The Kalashnikov Concern unveiled their latest submachine gun called the ‘PPK-20’ for military pilots during the ‘ARMY 2021’ arms exhibition outside of Moscow in late August 2021.

The weapon is an advanced version of the ‘Vityaz-M’ FSB submachine gun. The PPK-20 fires 9x19 mm ammo that is perfectly suited for close combat inside buildings, as well as for hitting targets up to 50 meters away in open areas.

The biggest differences between the two versions are the size, weight and the length of the PPK-20. It is smaller, lighter and more compact. Yet, due to the shortened barrel, the PPK-20 has lost some accuracy, but instead received a number of useful ergonomic features.

First of all, it can be concealed inside of a pilot’s seat or inside of their emergency backpack. And as Kalashnikov’s experts even suggest, it would also be a perfect weapon for security officers operating in urban areas.

“The PPK-20 is compact and small. It can be concealed beneath the coat of a security officer who operates in urban areas in civilian clothes. So, besides an army purpose, the PPK-20 matches all the security forces criteria of a concealed weapon for defending a VIP at public events,” says Vladimir Onokoy, head of the Department for Military-Technical Cooperation of the Kalashnikov Concern.

The PPK-20 for pilots has already passed military testing. In the future, the company plans on producing the same versions of the submachine gun for the civilian market.

At the same time, the PPK-20 has adopted a new side-folding stock from the AK series that allows users with a height between 1.60 to 2.15 meters to comfortably use this weapon. It can also be easily side folded and the weapon can comfortably be used in one hand.

The PPK-20 is a submachine gun with a fire rate of 800 rounds per minute. It’s worth mentioning that an AK-12 fires just 600 rounds.

As the Kalashnikov Concern states, the PPK-20 can penetrate 3A class body-armor plates if chambered with 7H21 armor piercing 9x19 ammo.

The upper side of a submachine gun is equipped with Picatinny Rails that allows for the installation of lasers, red dots and other tactical accessories.

It also has a two-sided safety for right- and left-handed users.

As mentioned before, the weapon’s kit includes an easy-detachable silencer that conceals the flash from a shot, as well as the sound.