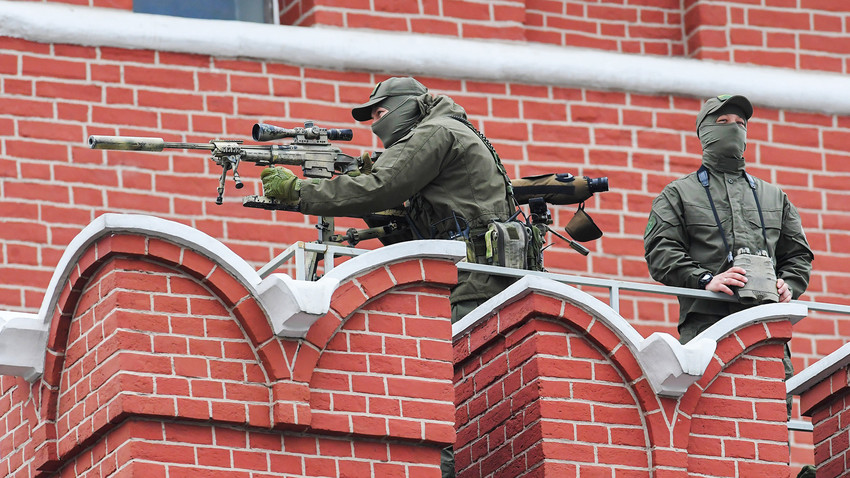 Snipers on the wall of the Moscow Kremlin

Russian Special Forces guarding the president of the Russian Federation have access to all the latest and most advanced weapons on the military market.

There are two sniper rifles that operatives were captured with by photographers at public events while protecting Vladimir Putin. We asked former security forces snipers who worked in Moscow on such public events to share their experience on working with these rifles and why these weapons were chosen among numerous sniper weapons to protect top ranked officials. 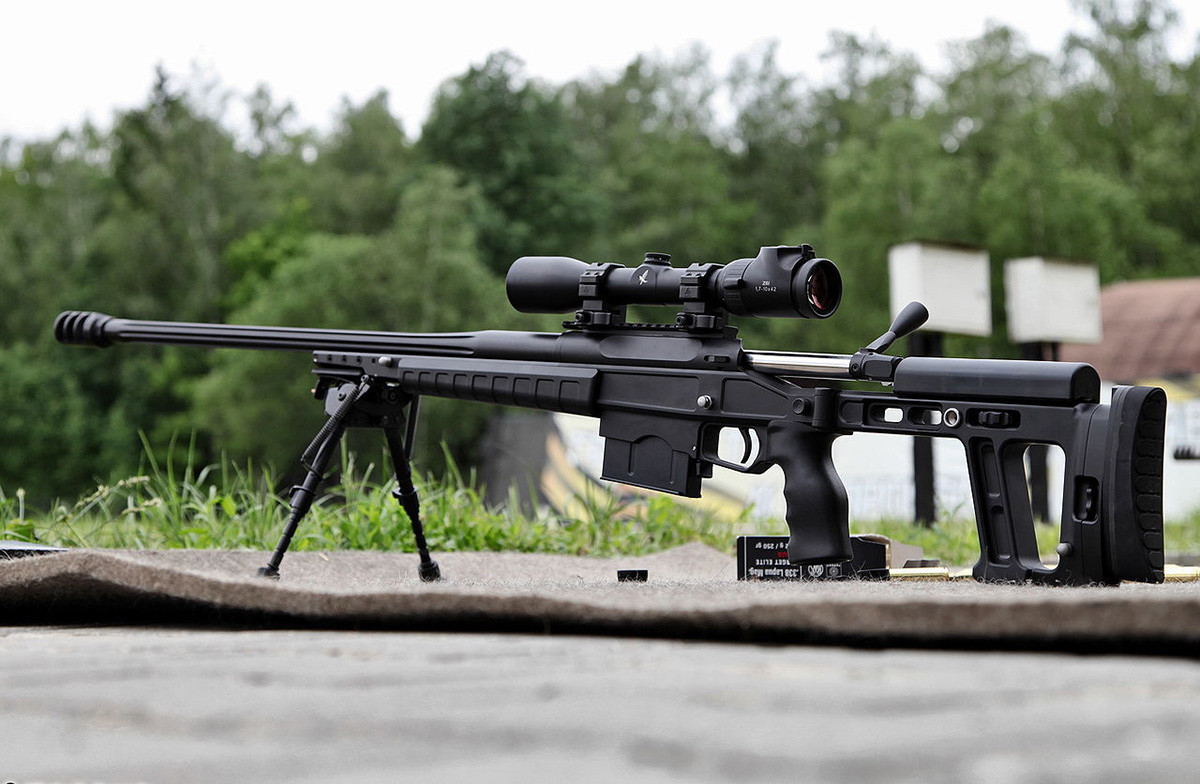 The T-5000 sniper rifle was created in 2011 by ORSIS enterprise for military and police purposes. It was presented as one of the most precise weapons on the market with the capacity of sending three .308 Win rounds just 15 mm from each other at a 100 meter distance.

Security forces were quick to purchase a number of T-5000s for their snipers once they appeared on the market and, a year later, elite Alfa FSB forces won an international sniping competition with these rifles.

“These rifles proved themselves to be more accurate than Austrian SSG 08 from Steyr-Mannlicher that were previously bought for the Russian SpecOps. Not too many people know that in the 1990s and 2000s we didn’t have high quality sniper rifles in the country and the military command had to purchase them from abroad,” admits Ivan Alekseev, a former FSB sniper.

As he notes, ORSIS was one of the first companies that appeared on the Russian arms market in late 2000s, when oil prices were high and influential men with money saw the moment to invest in private arms manufacturing and creating rifles that would rival foreign sniper weapons.

“Top guys in the military command didn’t like that they had to purchase foreign rifles and ammo for SpecOps units to protect high ranked officials.”

The T-5000 is somewhat of ORSIS’ business card. This rifle made a name for them and was even close to adoption to the army in order to switch the outdated SVD sniper rifle. Yet, bureaucracy, lobbying and conflict of interest behind closed doors put an end to this possibility and the contract to create Russia’s new era sniper rifle for the army and to be integrated into Ratnik-2 battle gear is still open.

The T-5000 is a hand-reloaded repeater with a sliding breech bolt and two front locking lugs. The rifle has aluminum alloy with a folding joint manufactured from tempered stainless steel and designed to stay operationally fit and complete, even in the calibers most powerfully damaged by their recoil.

“The weapon has pretty low and comfortable recoil compared to previous era Soviet SVD sniper rifles. Among the minuses I would name a number of polymer details. From my perspective, the trigger mechanism could have also been smoother,” says Alekseev. 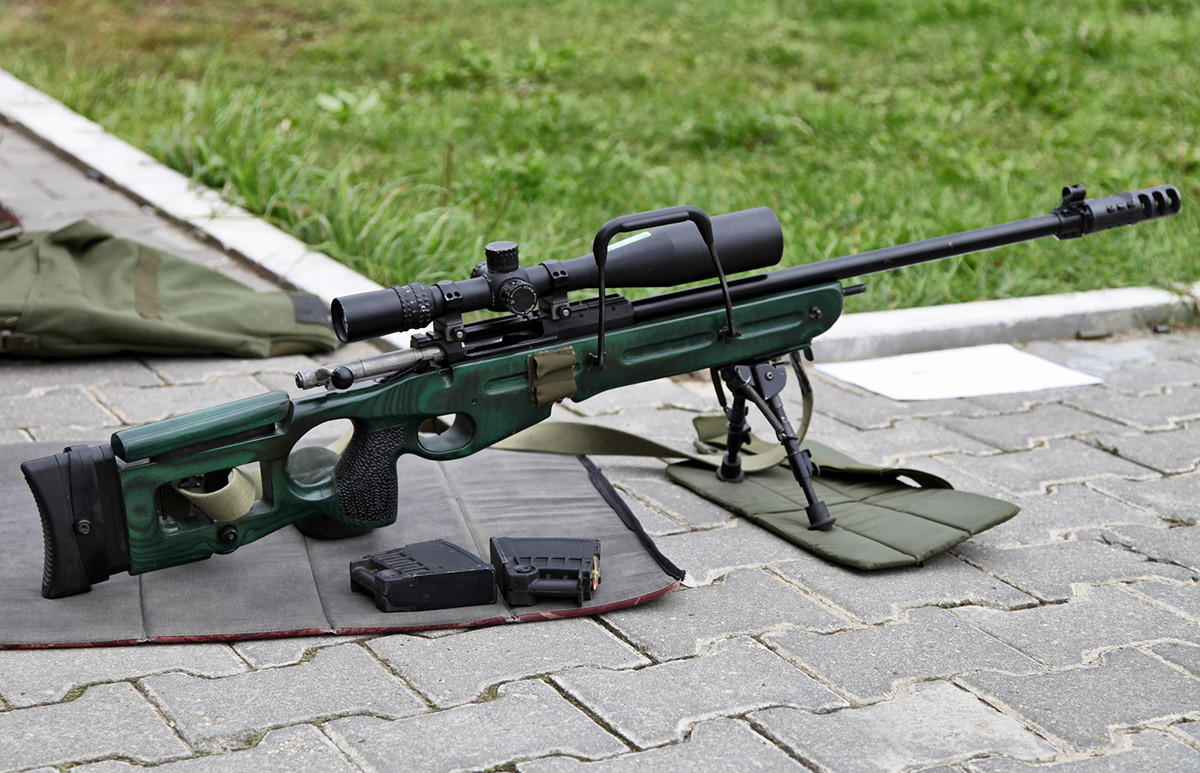 The SV-98 was one of the first sniper rifles created after the collapse of the Soviet Union. It was created by one of Kalashnikov Concern’s subsidiaries and was immediately adopted by the country”s Spec Ops units, as they drastically needed a modern sniper rifle for their operations. Including those tasked with protecting top ranked officials.

Like all the other sniper rifles in the country, the SV-98 was believed and promoted to become the replacement for the SVD. Yet, it didn’t work out and it was instead purchased for Spec Ops units.

I personally eye-witnessed these sniper rifles during the closed Spec Ops competitions held in Chechnya, one of the most notorious regions of the country, where you can find an AK lying in the trunk of every car.

This rifle, unlike all other modern sniper weapons, was created with a wooden stock that gets wet and can even swell up after the rain. The weapon was initially chambered with the Imperial Russian 7,62x54 mm rounds that don’t suit for precision shooting of small sized targets at distances of 300 meters or more.

Later versions of the SV-98 were modified for NATO’s .308 Win and .338 LM ammo and became more accurate rifles.

Nevertheless, the weapon still has a number of setbacks, according to a Spec Ops officer who spoke to me on condition of anonymity.

“The most important things about a sniper rifle are its barrel and its ammo. The creators fixed the ammo issue, however the barrel is still an issue. Sometimes the swifts inside of it (rifting inside of a barrel responsible for a bullet’s ballistics) are properly cut and sometimes engineers don’t pay enough attention to their work. So you’re getting a cat in the bag,” the officer admitted.

He also disliked the trigger, saying that it’s as rough as the Soviet SVD’s one and it’s not suitable enough for SpecOps operations.

“It might be good enough for the army, but if a unit has funds, the command purchases other rifles for the job,” he said.

And according to him, an SV-98 can be called a weapon for beginners.

“The weapon has evolved throughout time and became better compared to the late 1990s versions. Engineers added aluminium skeleton alloy and stock to it. It became more accurate, but there are still better rifles on the market.”.

Despite all the weaknesses, the SV-98 has its purpose and is, indeed, well suited for beginners. There are tens of thousands of SV-98 rifles in Russia’s arsenals and are often used to learn how to hit targets further than a kilometer away.

Once mastered, one can advance to more advanced Russian or foreign sniper rifles.