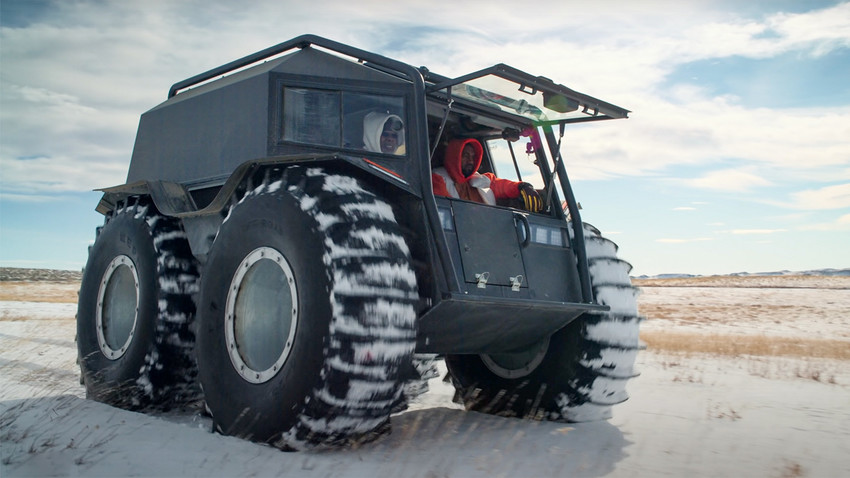 Kanye West/youtube.com
The legendary Sherp will help you get to places where no man has ever stepped before. Tested and approved by one of Russia Beyond’s correspondents.

American rap star 2 Chainz and Kanye West each recently bought themselves an ATV that would help to survive an apocalypse - the Russian-made Sherp.

The vehicle is considered by many to be the perfect off-road machine for hunting, traveling and (you won’t believe it) even swimming! Yes, the Sherp can ride through swamps, break ice and “swim” over rivers and lakes, while also making rides through rough terrains and forests seem easy.

We personally tested the vehicle in winter 2020 in a Russian forest. Our journey began with crossing an icy river: the ATV dipped its nose under the ice, leveled off and then slowly, but surely, made its way through the water barrier covered with a thin layer of ice.

Having reached the opposite shore, the car froze and began a smooth climb up the hill at an angle of 45 degrees. The rear part dipped under the ice behind it and some water leaked into the cabin - apparently someone had only loosely closed the rear window, but that wasn’t a big issue - we were on a hunting trip and riding in places which required special waterproof gear.

We then moved into the forest and tested the capabilities of the all-terrain vehicle when passing natural obstacles: boulders, stumps, fallen trees. And nowhere did we meet anything capable of stopping the vehicle or puncturing the tires. The only drawback that we noted is the lack of seat belts or other means of passenger support. The feeling was similar to riding in an armored personnel carrier or a military KAMAZ - like you’re back in the army.

Besides that, there are two electric heaters inside that would make you feel warm at night and even allow you to cook food inside the vehicle.

Pros and Cons of the Vehicle

The main feature of the Sherp is its ultra-low pressure tires with a special reinflating system. An inner computer analyses the obstacle a vehicle has to override and immediately changes the tire pressure, allowing it to overcome boulders, fallen trees or ride out onto water.

It has a 60-liter fuel tank and it’s worth mentioning that the vehicle consumes a lot of fuel - around 3 liters of diesel per hour. So you’ll need to buy up to additional cans that can be stored inside the vehicle.