Russia creates first robot for military and scientific missions... on other PLANETS (PHOTOS) 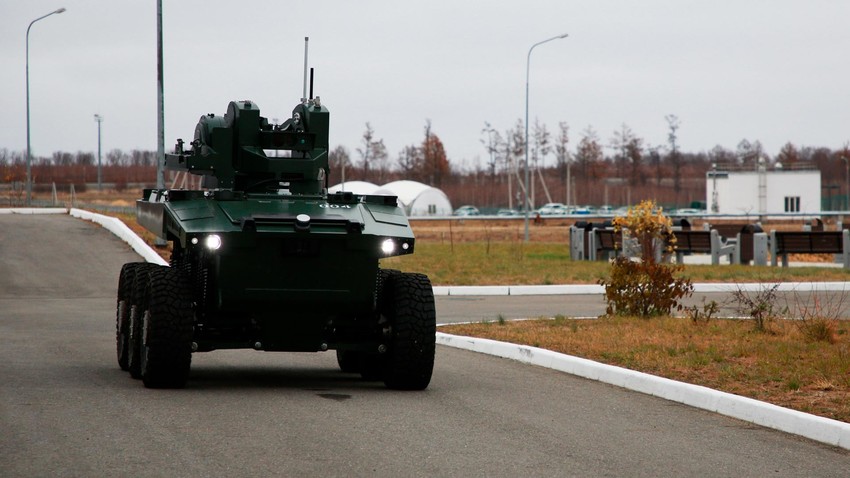 Roscosmos/Sputnik
This robot, armed with a machine gun and anti-tank missiles, is guarding the territory of the Russian cosmodrome in the Far East. But, in the future, it may participate in Russian research missions on the Moon and beyond.

In October 2021, the Russian military successfully tested the ‘Marker’ unmanned ground vehicle at defending the Vostochny Cosmodrome. The goal of the trial was to see how well the machine is suited for patrolling operations and how well it can detect potential enemies in various weather conditions, ranging from blazing sun to torrential rains in the middle of the night.

The Defense Ministry’s officials, as well as those at Roscosmos, were satisfied with the results and determined that the vehicle was ready for further military tests prior to becoming the first robot to be used by the military and by scientists to research other planets.

What is the ‘Marker’? 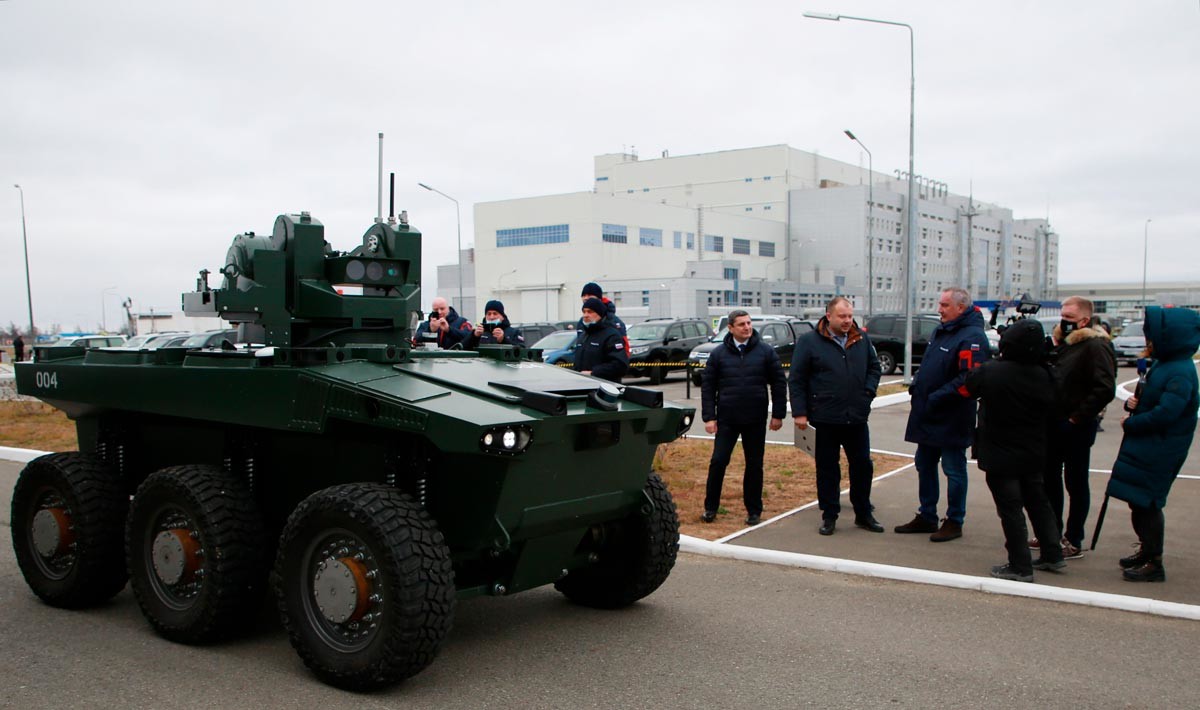 The ‘Marker’ is an unmanned ground vehicle armed with 7.62x54-mm machine guns and two anti-tank missile projectors. During the tests, the machine proved itself capable of autonomous operation for three days without recharging.

Arkady Petrosov, head of the project of the National Center for the Development of Technologies and Basic Elements of Robotics, pointed out that the ‘Marker’ has the best object recognition capabilities in the country, due to its artificial intelligence and autonomous movement in an unknown environment.

The artificial intelligence is placed on a wheeled, as well as on a tracked, platform and is capable of travelling up to 100 kilometers including on-road and off-road elements. The operator needs only to select the start and end points; the robot finds its own route, creating a map as it goes using cameras and other sensors. The ‘Marker’s capable of automatically avoiding obstacles, while sticking to the fastest route.

The vehicle is capable of doing so, thanks to a number of vision cameras placed along the perimeter of the hull. They provide an all-round view and form a complete picture of the surrounding environment and the accessible road.

To put it simply, the ‘Marker’ is somewhat of a militarized version of a Tesla capable of going off-road.

The ‘Marker’ was also tested while teamed with a swarm of drones. The vehicle was shown working with a group of fifteen drones, which worked together in three teams of five. The “aerial team” provided it with a long-range scouting capability, allowing the ‘Marker’ to see into inaccessible places, especially in an urban environment. Drones can also pass on target data for the ‘Marker’ to engage targets which it cannot see directly.

The machine can also be used as a drone carrier and a hub for the drones. The motive for having so many uses is not just to provide a wide coverage, but also to field swarms of the kamikaze attack drones or loitering munitions. You can find more information on kamikaze drones and their impact on wars of the future here. 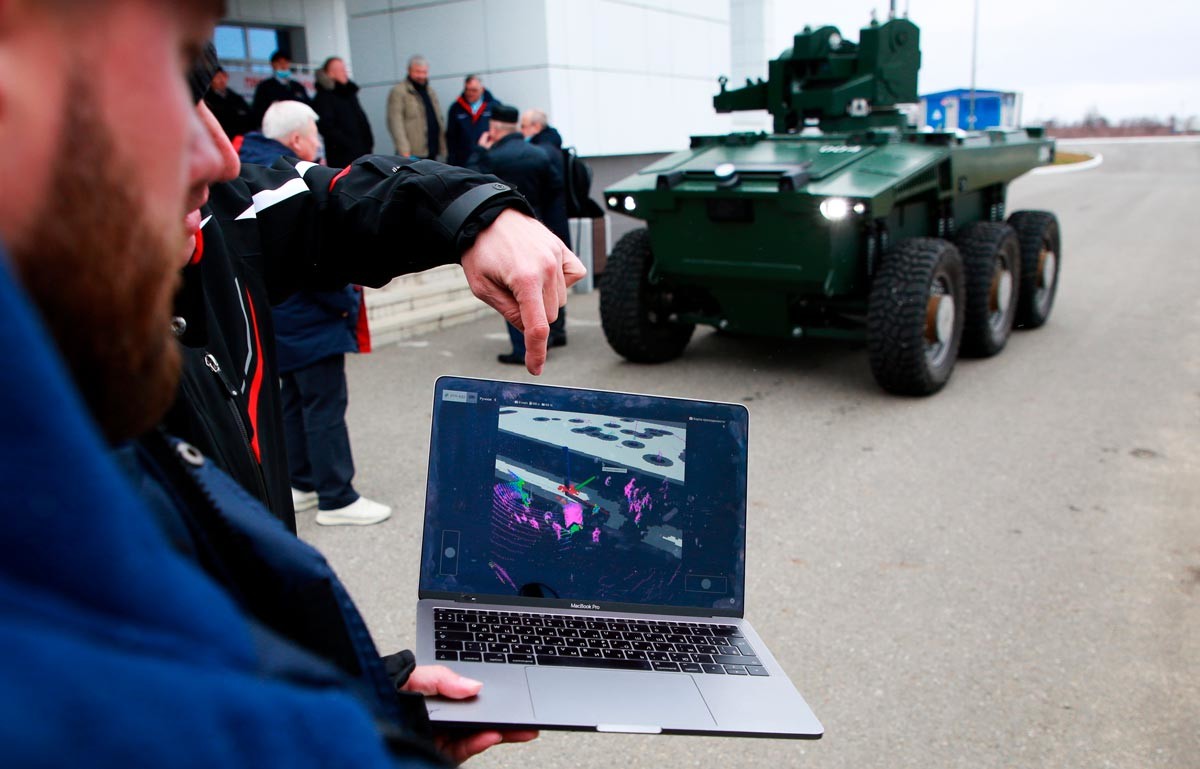 “At the beginning of October [2021], President Putin met with the Ministry of Defense mission in Sochi. The head of state tasked it to develop platforms with artificial intelligence by 2027, which will be able to act independently on the battlefield without human involvement. The government will allocate almost 200 billion rubles (approx. $3 billion) for these tasks,” says Dmitry Safonov, a former military analyst of the newspaper Izvestia.

The expert states that Americans are already conducting such tests.

“They integrated pictures and data about possible targets into their Modular Advanced Armed Robotic System (MAARS) and tested how they behave on a shooting range when they have to destroy targets on their own,” he says.

According to him, similar technologies were also integrated into ‘Abrams’ tanks and if robotic technologies prove themselves worthy at the shooting range, the Americans will proceed with real-life battle tests with tanks and robots.

“We’re standing one step behind them in these tests. But we’ll catch up,” Safonov believes.

At the moment, the Russian Defense Ministry combines two types of ‘Marker’ tests. The first one - shooting tests with machines independently searching and locking down objects with operators pressing the ‘fire’ button. And the second one where these machines have to independently patrol and without human intervention conduct reconnaissance missions on the ground in groups of up to five vehicles, where artificial intelligence controls all their actions without firing. 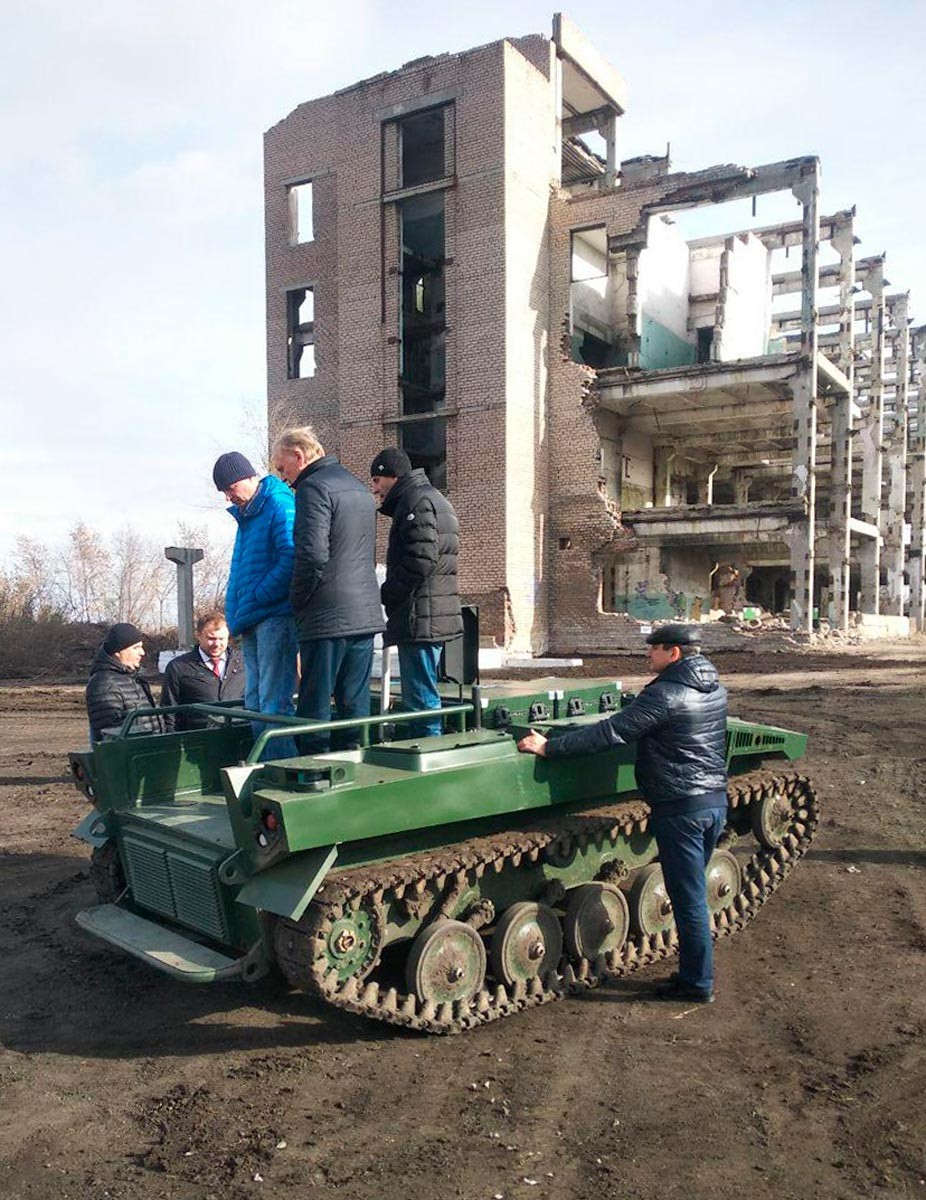 “The ‘Marker’, as other modern Russian military platforms, is being developed as a modular system. This is being done so other contractors and interested parties would offer technologies and arsenals which will simply be plugged in. Something similar was done with the ‘Armata’ platform. So the same future lies for the ‘Marker’,” says Ivan Konovalov, Development Director of the Foundation for the Promotion of Technologies of the 21st Century.

He also says that’s the main reason why a number of state runned corporations are interested in this robot - the Defense Ministry, as well as the Roscoscos corporation, which foresees it as a defense tool for its spaceports and its researches on the Moon and other celestial bodies.