Science & Tech
Dmitry Litovkin
The first components of the battle kit have already been tested in Syria.

It has the ability to withstand the impact of a sniper rifle bullet, prevent the explosion of an anti-personnel mine, provide concealment from thermal imaging cameras at night and, in daytime, allow the wearer fully to blend in with the surrounding terrain. All these are within the capabilities of the ‘Ratnik-3’, the new individual battlefield kit of the soldier of the future.

Components of the gear and its subsystems are already being tested in real combat operations in Syria. Individual parts of the system are expected to start being adapted into the armed forces in the near future. Moreover, it won’t just include special camouflage clothing, body armor, communications equipment and devices for mapping the tactical environment, but also smart weapons capable of indicating to the user where the target is and how to hit it effectively.

A first glimpse of the new battle gear

The new kit was showcased within the framework of the Army 2021 exhibition and forum, but was not available for viewing by regular exhibition goers. Defense Minister Sergei Shoygu was said to have been delighted with what he saw. The Kalashnikov concern showed the military chief a gun integrated with a neural network. It did not just fire, but literally “talked” to the user, informing him of the optimal moment for delivering an effective shot. It was not the assault rifle itself that was responsible for this, but the optical and electronic surveillance and target acquisition systems incorporated in the individual protection kit for servicemen.

Earlier, the Kalashnikov concern showcased a highly futuristic gun for the civilian market that looked like something taken out of ‘Star Wars’ - the so-called MP-155 ‘Ultima’ smart shotgun. The innovations tried out in it were successfully adapted for the combat system.

Representatives of the concern boasted at the launch that the MP-155 ‘Ultima’ is equipped with a portable computer with digital display. The smart shotgun is synchronized with various electronic devices and is fitted with a timer and an indicator showing the number of remaining rounds, as well as a shot counter.

What Russian soldiers use today 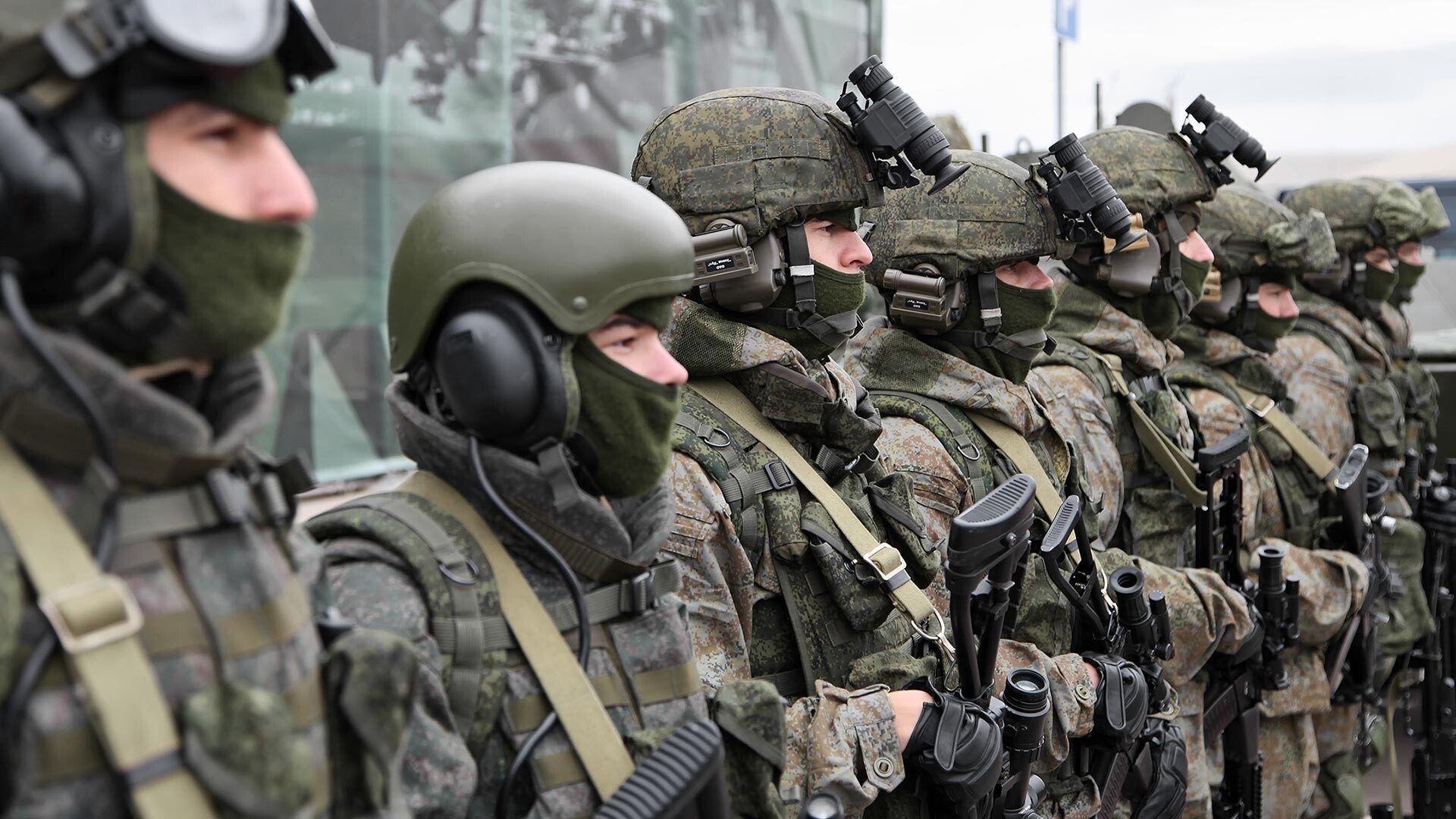 Troops are currently equipped with the second-generation ‘Ratnik’ system, which has the serial number ‘2’. It consists of five integrated elements providing attack, defense, control, life support and energy supply. Each of them, in turn, incorporates modular sub-systems that can be swapped according to climatic conditions and the nature of the combat environment. For instance, in Russia’s central zone servicemen use camouflage in predominantly green and black colors. In Syria, the apparel has a pink/light green/gray color scheme that permits the wearer to blend in with the sandy terrain. Among the troops, the suit has been jokingly nicknamed ‘Piggy’ because of its unusual combination of colors. In the Arctic the soldiers wear black-and-white colors.

The suit’s developers say that, apart from its concealment function, it also maintains a maximum degree of comfort during the course of the wearer’s everyday activities. The apparel can be continuously worn for at least 48 hours. The fabric is treated with a special formulation that lets air through but repels moisture. A winter version of the kit has also been designed. It differs from its summer counterpart in having thermal insulation and a heat source - all that’s needed is for a battery to be connected and the personal heating system will be activated.

All the component parts of the suit can be mixed and matched. The total weight of the standard version comprising a one-piece oversuit, along with body armor providing protection against a direct hit from a sniper rifle, is around 10 kg, while the full version with helmet, assault vest (with level 6 protection) and thigh and shoulder shields, weighs in at around the 20 kg mark. Altogether, the new combat outfit will be able to protect approximately 90 percent of a soldier’s body area.

For attacking the enemy, the serviceman has a whole arsenal of rifles, assault rifles and machine-guns at his disposal. Depending on the type of troops and arm of service, the soldier can operate an AEK-971 Koksharov assault rifle, the latest Kalashnikov models (AK-12 and AK-15) or the Pecheneg machine gun. There also is a new sniper rifle - the 12.7-mm 6V7M, as well as a new 40-mm automatic mounted grenade launcher, the 6G27 ‘Balkan’. A new 23-mm portable artillery complex for attacking lightly-armored enemy hardware and fortified installations is also set to be made available. The kit additionally includes electronic aiming sights and helmet-mounted monitors that allow servicemen to fire “around corners” from cover without sticking their head out of their emplacement.

What equipment Russian soldiers can expect in the future 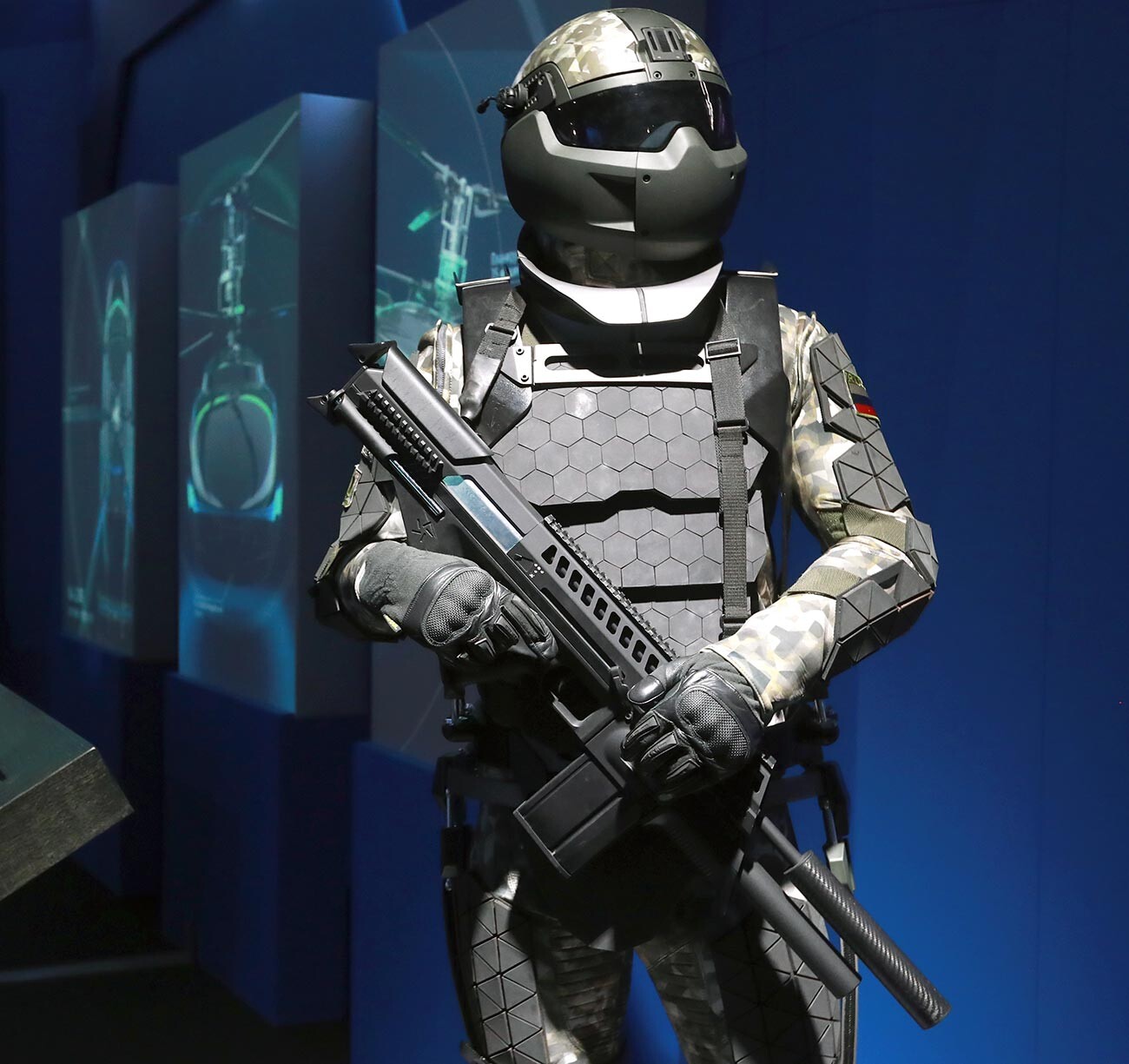 Despite the secrecy surrounding it, Ratnik-3 was partially on display at the ‘Army 2021’ exhibition. The stands hosted by Russian companies included a human robot: Its helmet, completely covering the head like a motorcycle helmet, had integrated monitors displaying virtual 3D images on the visor and it had body armor made of composite plates resembling the scales of a reptile. In addition, the kit included a titanium exoskeleton enabling a serviceman to carry practically the equivalent of their own weight on their back. Smart boots capable not only of warning a soldier of a mine ahead, but also jamming its radio activated fuze, were on display, too.

It is difficult to predict in what form all this will enter service. A second-generation Ratnik kit costs the military 200,000 rubles (approx. $3,000) per serviceman. There isn’t a single expert today who would hazard a guess as to how much the third-generation kit will cost (given its modern electronics and composite and titanium compounds and alloys). But this may not be the crucial question. The military are pragmatic and only purchase what is genuinely essential at the present moment. For these reasons, the two earlier versions of Ratnik entered the army piecemeal, beginning with the camouflage and body armor components, then the rifle armaments, followed by the electronic and optical battle management systems. Only special operations forces, the airborne troops and commanders of armored and artillery sub-units have been fully issued with the latter. 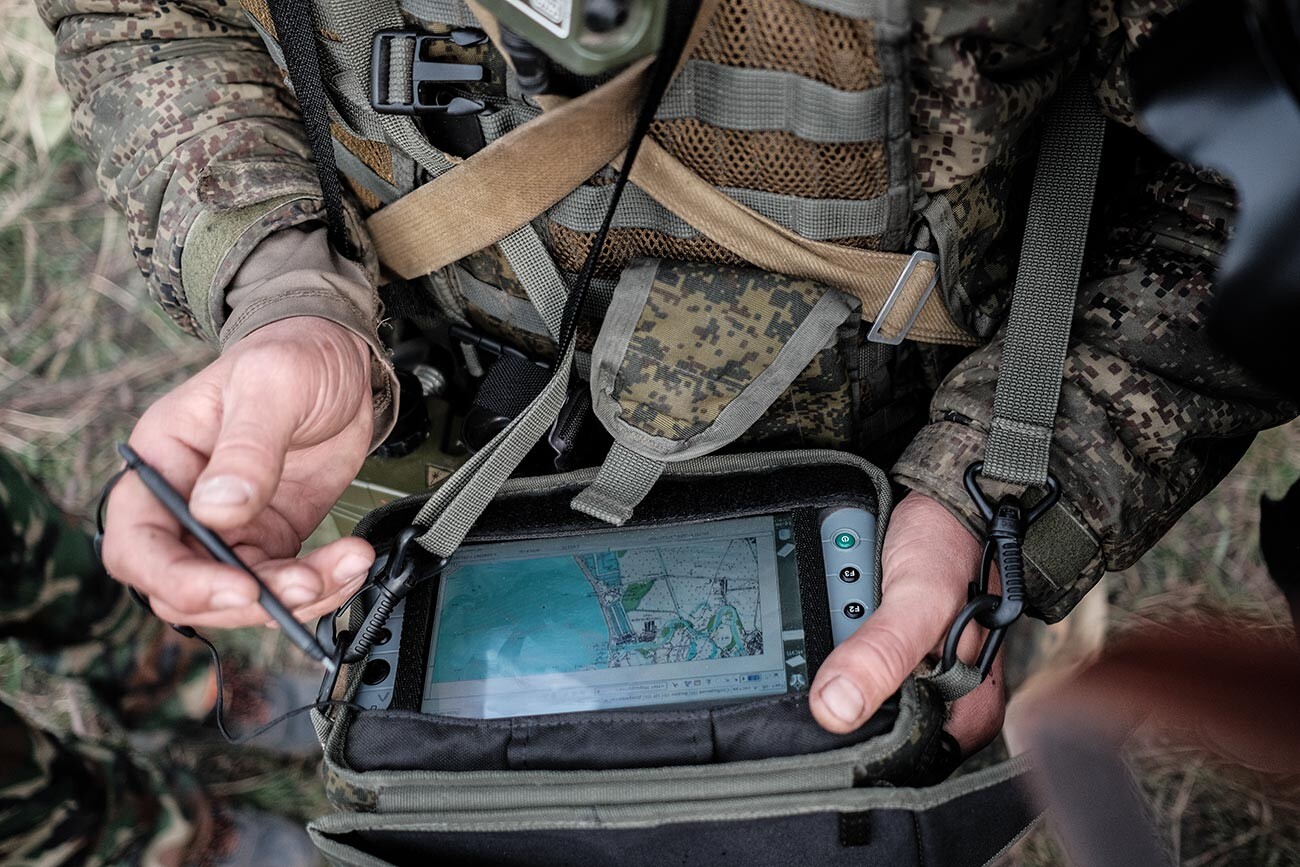 At first glance, they look like ordinary electronic displays. They show a map of the surrounding area, the coordinates of targets and suggestions on how to destroy them. This can include both automatic calculations of wind direction and speed for tank and artillery crews, as well as information on what helicopters and planes, carrying what armaments, are in the zone of special ops and airborne forces operations. A soldier merely needs to illuminate the target with his laser range finder and dab his finger (even gloved) on the display to select a specific weapon aboard one of the aerial assets, thus getting the latter, also in automatic mode, to launch it against the target.

The receiver that acquires this information on airplanes and helicopters is called ‘Gefest-24’ - a computer linked to every soldier on the ground. It functions completely autonomously from the point of view of the pilot, who, on getting a signal from the ground, only needs to confirm the readiness of his weapons. The electronics do everything else independently. This was the reason for the Russian Aerospace Forces’ highly effective use in Syria of old air-delivered munitions, even though they were not fitted with high-precision guidance systems.

The author is editor-in-chief of the ‘Independent Military Review’ newspaper.