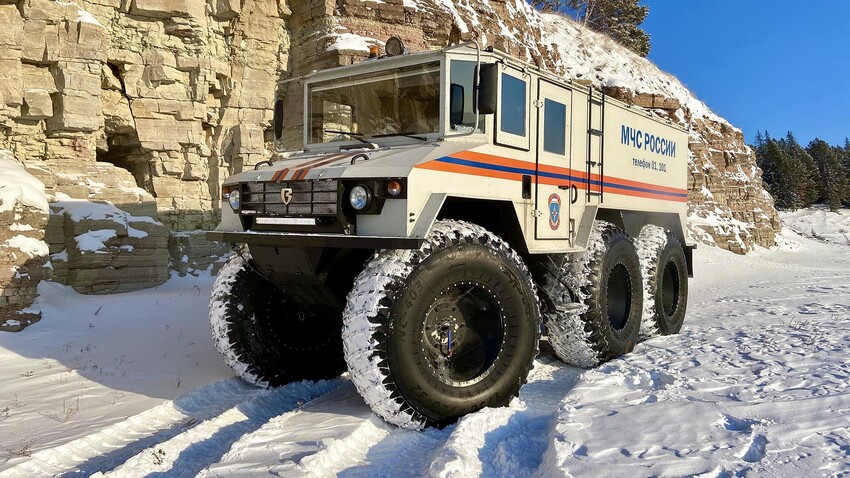 Ministry of Emergency Situations/Sputnik
This enormous truck will safely take you over icy rivers, snow dunes and even swampy bogs.

Makarov All-Terrain Vehicles, a small private Russian company, has created the perfect vehicle for the Arctic - the off-road ‘Burlak’ truck. This metal monster is capable of passing over five-meter-high snow dunes, fallen trees, boulders and can even cross icy rivers and reservoirs with a load of over a ton on board.

What was the ‘Burlak’ designed for? 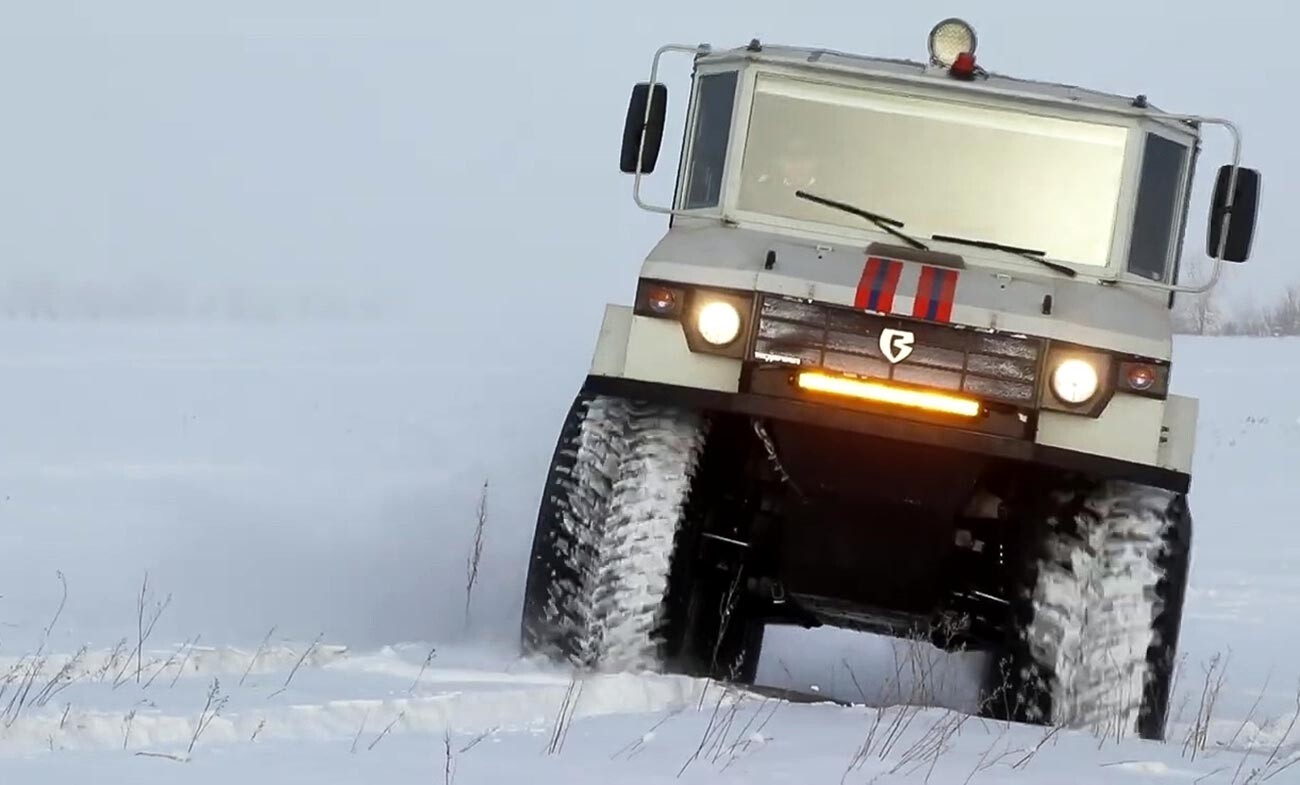 The ‘Burlak’ is optimized for traveling on winter roads and deep snow of the Arctic region and impresses even with its appearance. It is a huge civilian machine that's even bigger than a ‘Ural-4320’ military truck (click here to find more about Ural vehicles that are used in Russia). The ‘Burlak’ is also 0.24 meters wider and 0.70 meters higher. It is also impossible to get in the cabin without a special ladder. It has enormous size wheels that even with 2 tons of load will leave up to 70 cm space between the ground and the bottom of the car.

The ‘Burlak’s engine is installed in the front. Due to that, the vehicle “nods” into the water, but then realigns on the surface and “floats” forward. The makers also suggest that the vehicle won’t sink under any circumstances, as each of its wheels has an internal pressure of 0.1-0.4 atmosphere that allows the machine to float even with two tons of additional cargo.

In addition, the main systems of the ‘Burlak’ (transmission, brake system, etc.) are hidden in the so-called ‘boat - box’, which is constantly heated by the heat of the engine.

To put it simply, the ‘Burlak’ floats in the water, breaking any thin ice and can easily then get out of water on solid ice or land. Everything is designed to work perfectly even in the fiercest Arctic frosts.

How it was created 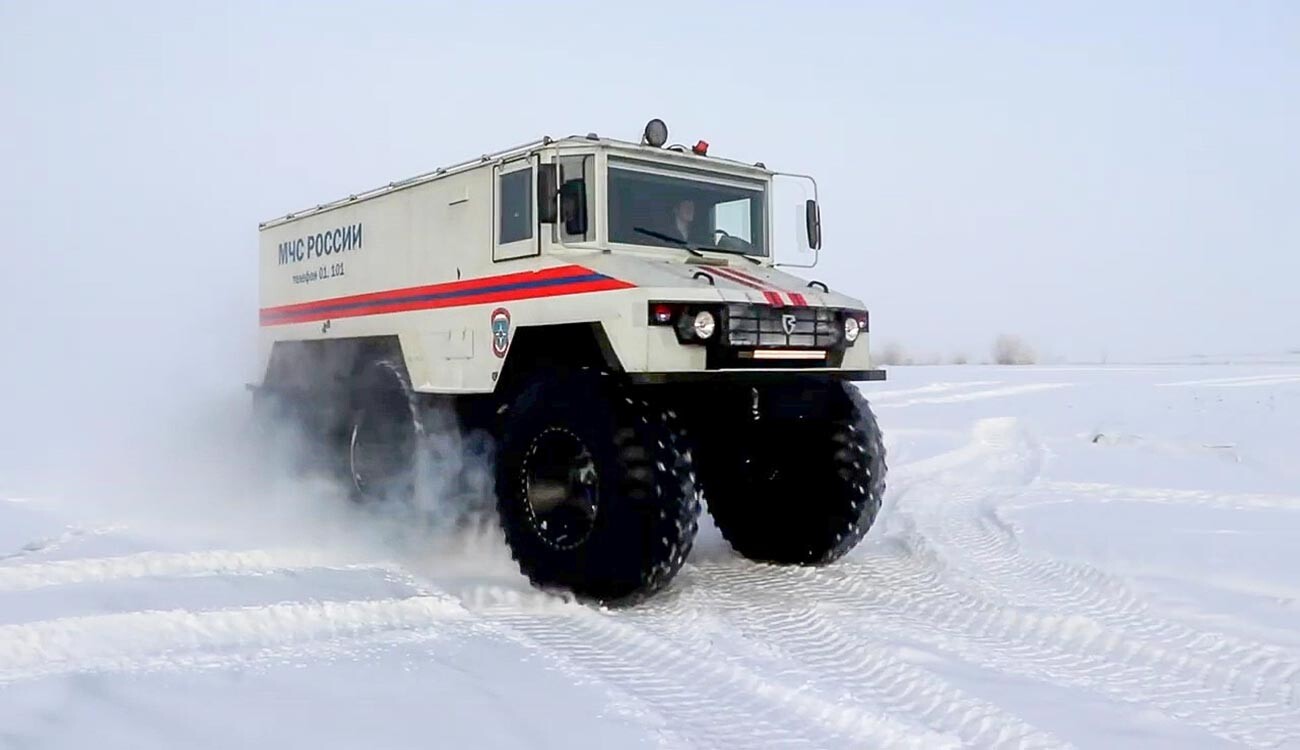 The developers got the idea to create an all-terrain heavy truck during a trip to the Ural Mountains. It turned out that no existing vehicle is actually capable of crossing rivers, rolling over fallen trees and boulders and riding on icy roads.

At first, they planned on creating a standard sized vehicle for these purposes, but stopped short, as a couple of companies had already started similar projects a bit earlier. Instead, Makarov All-Terrain Vehicles decided to create the first Kamaz-sized (one of the USSR’s largest civilian trucks) all-terrain truck suitable for polar explorers and big businesses (oil and gas production) that operate in the Arctic.

It was supposed to use the suspension and some other elements from military light armored vehicles, but, for various reasons, designers had to move away from the initial concept of redesigning military vehicles into civilian ones and decided to create a fully civilian ‘Arctic truck’ from scratch.

Makarov All-Terrain Vehicles decided to mix Russian and Japanese components to create their truck. It used the transmission from the ‘Gazelle NEXT’ minivan, modified the gearbox from a ‘GAZ-66’, added a ‘Cummins’ diesel-electric engine and used a number of Toyota-made components, alongside the ones developed by Makarov for cross-country vehicles. These are, for example, on-board gearboxes, which relieve the standard transmission and facilitate its work with large-diameter wheels.