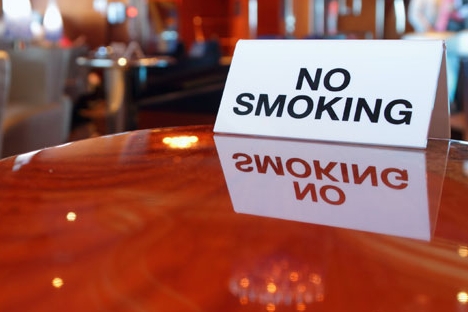 Russia plans to raise excise duties on tobacco, enact tough regulations of tobacco retail, and ban both smoking in public places and scenes of smoking in films. For producers and distributors, however, the major threat is coming from China and not Russian lawmakers.

Russia’s State Duma is due to hold the second reading of the Ministry of Health's draft law entitled "On Protection of Public Health from the Effects of Tobacco Consumption." The bill was passed on its first reading in late December.

It proposes a phased ban (3-5 years) on smoking in all public places, including bars, restaurants, hospitals, hotels, and even apartment stairwells. The only exceptions to be made will be for specially equipped places in open areas and specially isolated premises fitted with ventilation systems.

It is difficult, however, to imagine how smokers will be forced out onto the streets. Several years ago, for instance, a measure was introduced to permit fireworks in designated areas only. Nonetheless, fireworks are still freely let off in backyards across the country.

The situation with smoking in restaurants will depend on the fine. "If the fine is a hundred rubles [$3.30], smoking in bars will continue as usual; but if it's a few thousand, we'll see a much faster turnaround," said Ivan Kotov, director of A. T. Kearney in Russia. Global practice shows that smoking bans reduce clientele to begin with, but soon afterward, people return to their favorite haunts.

Some restaurateurs find a smoking ban could cut costs. "You have no idea how expensive a powerful ventilation system is and how much air you have to pump in. If I shoo all smokers outside and install a heater or a separate room for them, I'll be much more in pocket," said restaurant owner Dmitry Levitsky.

Whereas restaurateurs are bracing themselves for temporary losses, tobacco producers need not worry. Another restrictive measure proposes a ban on the open display of retail cigarettes. Cigarette boxes will be stacked so that only the lateral face is visible, which, according to the authors of the bill, should reduce the urge to buy them — especially among minors. However, the cigarette brand name will still be perfectly legible and, moreover, the warning label will be out of view.

In actual fact, tobacco distribution in Russia is controlled by just two companies: Metropolis and SNS. If the bill is passed, these two companies will just redistribute the logistic flows. The bill’s ban on sponsorship will also be far less troubling for cigarette producers, as they had no advertising yield in the first place.

Finally, the Ministry of Health is trying to ban all scenes of smoking in new Russian films, unless "essential to the artistic concept." However, this constraint has little to no effect in reality, even in the U.S., where a similar ban was imposed long ago.

Meanwhile, the main tool in the fight against smoking will likely not be the law, but the hike in excise tax. It is already rising, on average, by 20-30 percent a year; but that, according to Health Minister Veronika Skvortsova, is not enough. The department insists on increasing the excise tax to €1.28 ($1.70) per pack, which represents the minimum rate in the poorest parts of Europe.

Commissioned by the Ministry of Health, Russia's New Economic School estimates that higher excise taxes, along with cigarette prices at the lowest EU level, will raise an additional 600 billion rubles ($19.8 billion) in budget revenue and save 2 million Russian lives over the next five years.

The tobacco industry presents different figures. According to the ITIC and Oxford Economics, a hike in price to 150 rubles per pack will cut the number of smokers, but only slightly. Smugglers, meanwhile, are in luck. According to the study, the legal market will halve, with illicit trade in cigarettes climbing to 35 percent.

Accordingly, the rise in budget revenue will not be quite as healthy as the Ministry of Health forecasts, falling far short of the 600-billion mark and landing at 250 billion rubles instead.

Russia is currently regarded as a source, instead of a recipient, of contraband cigarettes — on a par with Belarus, Ukraine, and China. Russia’s main supply lines go through Kaliningrad and St. Petersburg. However, Russia has recently seen an inflow of goods from Belarusian producers, whose output is substantially larger than the volume of orders placed by international tobacco companies.

The surplus is believed to be illegally exported to the EU. Now Russia, too, finds itself in the firing line: with illicit trade accounting for less than 2 percent of the market, there is plenty of room for smugglers to expand operations.

Belarus, however, is a mote of dust compared to the king of counterfeiting — China. Russia’s largest neighbor accounts for 80 percent of all global trade in illicit cigarettes and is now eyeing the Russian market with interest.

"We estimate that, as long as the cost of cigarettes remains less than 10 percent of the average family budget, smuggling will not be an issue," said Vadim Zhelnin, head of the tobacco association Tabakprom. "But as soon as that threshold is crossed, the Chinese will be knocking at the door."