Meet the people who still live in Russian ghost towns 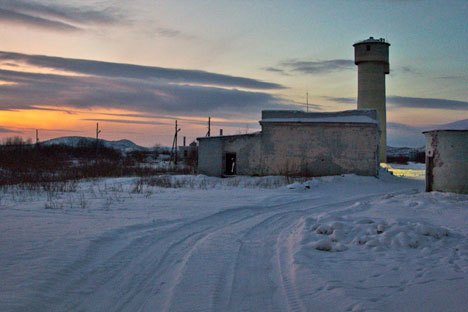 The people in Korzunovo have fond memories of the past: the grocery stores with “deficit” in Soviet-era goods, the community of young comrades-in-arms, the long Polar Day, when no one wanted to sleep. Source: Anton Panin / Vyacheslav Vazyulya

Today, the provocative label of “dead town” smothers a thousand human tales of departure, relocation, and long waits in the hopes of a flat in a new city. Yet, not all residents of these nearly uninhabited places have the desire to leave. RBTH explores the lives of residents in the Northern ghost town of Korzunovo.

Russia has nearly 20,000 ghost towns — places once built to serve strategically important locations or rich mineral deposits whose significance was later downgraded to unnecessary. The usual scenario: the incipient death of towns which were born during Soviet central planning, grandiloquent building projects or the Soviet electrification scheme. The implosion of the Soviet Union left many enterprises without viable funding. Patriotism — the carburetor of Soviet progress — could not kept them going either. A move to a new city is not unusual nowadays. Yet, unlike the majority of immigrants, people who come from ghost towns have no home to go back to.

View the gallery: The town of Korzunovo, forgotten service place of Yuri Gagarin

There are almost more online communities about ghost towns than there are ghost-towns. Even so, there is almost no information about “dead” settlements like Korzunovo. Thirty kilometers (18.6 miles) away from the Norwegian border in the far-flung Russian Arctic, the settlement was left almost uninhabited after the Red Army garrison there was decommissioned.

However, it's a little-known fact that Yuri Gagarin, the world's first cosmonaut, served for three years at the military air-base located nearby. Alongside this fact come persistent internet reports that a “bunch of loonies” are still living in the ruined town, refusing the offer of better accommodation in nearby Murmansk.

Headlight beams pierce the oncoming snow along the ice-bound road. The wintery sub-polar landscape is filled with dark outlines of hills and military installations, mass-produced housing with square windows, and wind-blasted trees clinging to the frozen ground. It all looks like the film location from Stalker (a renowned sci-fi art film by Russian director Andrei Tarkovsky).

The ruins of Korzunovo seem to be preserved by the low temperatures: its broken-nosed statues and rusty cars have become a sort of Soviet-era museum display. There is a nearly-audible silence in the dark as the snow falls, and then suddenly laughter — children in tracksuits, running indoors through the window of a single-story building. There are little girls with hairbands sitting on a bench, while a young blonde girl blows a whistle.

A small school bus brings children from nearby settlements and buildings (which initially appear to be deserted) for their lessons. Nearly 250 people live in Korzunovo. Buildings 42 and 43 are heated from a boiler room, and the lights are on in the primary and middle-school office around the clock: light comes up for just a few hours during the long Polar Night.

Soviet-era statuary across the road from the Town Administration reminds locals of Gagarin, the cosmonauts, and Communist Party big-wigs. There is a bluish-green plane that is traditionally decorated for the New Year by workers from the neighboring settlement, in a long-standing ceremony. Smiling kids stop to look at the lights. They mostly get around the village on ice-skates, because it's more fun that way; the snow-laden streets are lined with skate-marks. The abandoned houses and deserted buildings are just as much a part of their childhood as village or urban landscapes are for others.

“We stopped even noticing the ruins long ago. When the regiment was disbanded and people started leaving, things were grim, of course. But parting is always sad anywhere. Looters grabbed everything from the deserted homes,” says Tatiana, the school headmistress. “Several years ago they offered relocation to my husband and me to a flat in Krasnodar. But instead we decided to stay here. We've got jobs here, I get three months’ vacation in the summer, and we go to the South then. Actually we're really exhausted. Our little place is here, our home is here — we don't want to move anywhere.”

Korzunovo was built to serve the needs of the military: troops were posted here from different places in Russia, and their wives and kids came too. That's how Tatiana first arrived here, 35 years ago.

The people in Korzunovo have fond memories of the past: the grocery stores with “deficit” in Soviet-era goods, the community of young comrades-in-arms, the long Polar Day, when no one wanted to sleep until morning. In 1998, when the regiment was posted from Korzunovo to Severomorsk, no shops at all were left in the settlement, nor was there the old airfield from which you could fly to Moscow for peanuts in the old days.

“Why did we decide to stay? It's a tricky question. Everyone's got their own reasons. Nostalgia isn't enough to make that kind of decision,” says Vladimir, a former military pilot who now works as a life-safety instructor.

“The young teachers at the school grew up here in Korzunovo, finished their studies in Murmansk, but came back here. There aren't many local kids in the school: most of them are bussed in from nearby communities where there are still military facilities running, but no schools. That's what keeps us going. Every year they keep telling us that the nearby bases will be shut down too, and we'll be jobless. But for now, we keep on as before...”

There will be darkness: Polar nights in Murmansk

Living in the dark on the Kola Peninsula

In summer 1965, Yuri Gagarin — by then a famous cosmonaut — made a visit back to his former base at Korzunovo. He had studied at School Number 7, which now has a small museum in his honor. The school kids are members of the School Space Museum Club. In the old Soviet tradition, they offer guided tours — even for foreigners. Tourists from Norway, Finland, Britain and other countries come every year. Official delegations of Russians come too. For the rest of the time the Gagarin House remains unvisited and locked up.

Marina Popova, who runs the museum, followed her serviceman husband from balmy Alma-Ata and moved to Verkhnee Luostari — a village near Korzunovo. “At first it was awful: I couldn't even get to a shop, or walk around the town. Alma-Ata is a big city with lots of people and cars. Here, there's nothing,” says Marina.

“But each year it somehow got easier, and, now, we wouldn't want to leave here. It's like this: if a serviceman's wife doesn't go running back home after a few months, then she stays here for the rest of her life. There's something you can't easily explain about the North. It's inviting.”

The sun fails to rise above the horizon, but that's the way it is in the Polar Night. After two hours of hazy twilight, the darkness sets in once again. A huge moon, as big as the sun, crosses the sky. Its beams light the ice-rink in front of the school — two buildings with barely-lit windows. The kids are going home, pushing each other in the snow along the path and playing with the dogs. When the moonlight fades, Korzunovo once again becomes a line of dark shapes of houses with empty windows.

“Korzunovo will live, while we live here. It's all I can say,” Tatiana says, summing it up.

The fact of Korzunovo’s existence comes down to the work and sacrifice of its people. Persistence and determination have made its military families their own special kind of people, bred from nostalgia, a fear of uncertainty, habit, exhaustion, and a desire to live at peace with the world.

The low temperatures have not just preserved the village, but time itself — frozen in the era of its Soviet relics. Perhaps their still-undiluted Soviet patriotism helps them to shrug off the cold and darkness, believing in their heroism and that their deeds have been achievements. But their sacrifices no longer command the slightest official recognition — no medals, no Northern Hardship allowances. Perhaps real heroes do not require any allowances.