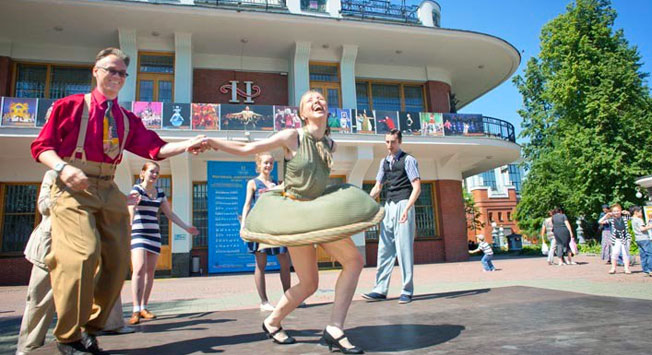 Moscow is one of the world's priciest cities – a factor that deters many tourists who may have been considering a “Russian adventure.”

Surprisingly, if you set yourself the challenge of not spending a cent in Moscow, it can supply as much adventure as you can take – within the legal limits, of course!

Finding a Way to Get Around

The only official way to qualify for free use of Moscow's public transportation is by being a decorated hero of the Soviet Union (or of Russia), a Knight of the Order of Glory, or a child younger than seven. Fear not, though! There are ways of borrowing a bike for free, instead. In fact, there are five bike outlets of exactly this kind – in the public parks of Sokolniki, Fili, Severnoe Tushino, at the Neskuchny Sad, or at Vorobyovy Hills.

Before this summer, you could only cycle free for two hours and had to produce a passport to do so. This year they promise to increase the rental period significantly; at the Vorobyovy Hills bike center they offer free inclusion in a one-hour eco-excursion of the park, too.

Free eats in Moscow present the trickiest problem: your choices are divided between either priests, or rockers. Even so, there are still a few ruses for taking care of your hunger without putting your hand in your pocket.  The first option happens on Tuesdays and Thursdays at 2 p.m. on 37 Old Arbat Street, at the graffiti-strewn walls dedicated to the deceased rock legend Viktor Tsoi: they hand out free tea, buns, and yogurts there.

A second option involves several “anti-cafes” in Moscow – like Clockfacer, Babochki, or Local Time – where you pay only for time spent, rather than for what you ate or drank.  The price of one minute runs no higher than 2 cents in an anti-café, and you can bring your own food and drinks or help yourself to free tea and buns. On top of all this, all three cafes offer free Wi-Fi.

Although it takes a little planning, you can also arrange to sit-in on a focus group of tasters of new food and drink products. There are two sites where you can sign-up, either Paid Opinions , or Paid-To-Poll.

There's a growing tendency in Moscow toward offering free Wi-Fi spots. Some of these spots can now be found in metro stations too. You can check the expansion of the network daily at this website.

From time to time, there are food festivals in Moscow that offer free food. The most well-known of these is the  Omnivore International Food Festival  (Apr. 23-27). It is also worth noting the Moscow Gastronomic Festival , which takes place under the aegis of the municipal administration.

Another event is Fashion Food , which has been running since 2010 in various city restaurants. Participation in these events may require a fee  ($6.50-13 on average ) or, sometimes, a special invitation; but they don't control how many tastings or visits to the food-tables you make once you've arrived at the event.

Check Out a Museum

Moscow has some museums which are free to visit year-round. These include: the Bulgakov House Cultural Center, located in the building where the author Mikhail Bulgakov lived; The Museum of History of Moscow City Psychiatric Hospital; the Museum of Industrial Culture; and the Museum of the Moscow Metro.

In addition to these, on the annual “Museum Night” you can get into any of the city's museums without having to buy a ticket – you just have to take your place in line. On every third Sunday of each month, the Moscow Museum of Modern Art (MMOMA), the Memorial Museum of Cosmonautics and the Gulag History Museum are all free too.

The Museum of Unique Dolls is free if you go on Thursdays between 10 a.m. and 12 a.m., and there are free visits to the “House on the Embankment” State Museum on every third Saturday each month.

Go to the Theatre

Student theatres offer free admission to some of their shows. Don't forget that Russia has one of the world's most highly-developed theatrical traditions: many student shows are performed on a level similar to professional shows.

You can check-out the performance schedules on the websites of the city's many theatrical and cinematic institutions –RAMT, the Shukinsky and Shepkinsky Drama Academies, and also VGIK.

There are completely free walks, in small groups, around Moscow's city center with English-speaking guides. These services are also available from Moscow Free Tour, which additionally offers a 30 percent discount on their Hop-on–Hop-off buses. The tourist website Vykhod v Gorod (City Exit) offers free, themed excursions and free cycle-tours around the city. These tours are usually in Russian, although you can find English-speaking guides.

Moscow has plenty of movie clubs where you can watch new releases by film-makers, enjoy movie classics a second time around, or see underground movies that are rarely screened in cinemas – and all for free. The most well-established of these venues is the Documentary Film Center(at the RIA-Novosti multi-media press center, 4 Zubovsky Bulvar). They show films in both English and Russian, with discussions afterward. Admission is free, but there are a lot of eager visitors, so it's a wise idea to sign-up ahead of time on their website.

The Zurzum Movie Club(at Winzavod, 4-iy Syromyatnichesky Pereulok, Building 6) shows a series of foreign movies: for example, in February 2013 they had a German cinema week, organized jointly with the Goethe Institute.

Rodnya Studio(the Loft at Artplay, 10 Nizhnaya Syromyatnicheskaya, Building 7, 3rd floor) is rated as one of the coolest movie clubs in Moscow.  They permit smoking in two of their three auditoriums, and, for movie-goers who arrive early, they even offer a free soft drink or cocktail. They present blocks of 8-10 movies assembled thematically by young art-curators, who are art-experts or journalists.

At Zvezda(Zvezda cinema, 18/22 Zemlyanoi Val) they have releases showing alongside movies in English and Italian.

Students of the Moscow Music Conservatoire also offer free orchestral concerts at the Tchaikovsky House and at the Conservatoire itself. You can check-out the repertoire here.