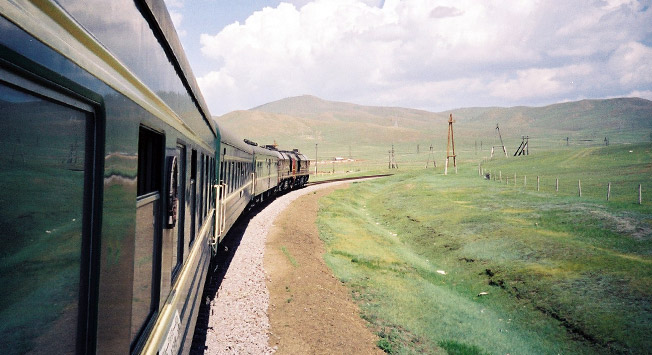 The Trans-Siberian Railway is featured in the “ Guinness Book of Records” for three categories: total length, number of stations, and construction time. At the beginning of the 20th century, the railway line provided a reliable transport service that linked the European and Asian parts of Russia.

The Trans-Siberian Railway was built in several stages and consisted of six sections. The first stage — the Ussuriysk Railway from Vladivostok to Khabarovsk — is 477 miles long.

It was completed and put into operation six years after the first stone was laid in Vladivostok in 1891. The West Siberian Railway from Chelyabinsk to the River Ob — the second stage — was 800 miles long and built in a record time of four years. The third section — the Mid-Siberian Railway from the River Ob to Irkutsk — which was 1,137 miles long, was built in the six years between 1893 and 1899.

Building the third section was significantly more difficult from an engineering point of view, as the flat land gave way to mountainous territory.

This is where the builders had their first encounter with a natural phenomenon of which little had previously been known: permafrost.

Construction of the 161-mile-long Circum-Baikal Railway was postponed because of technical difficulties. In 1900, a ferry service for trains began operating on a 45-mile route across Lake Baikal : The icebreakers Baikal and Angara carried trains across the icy river for five years.

In the winter of 1903–1904, around 28 miles of rail track were laid straight onto the ice, and wagons and steam locomotives were hauled across it by horses. The inefficiency of this method of crossing the lake was keenly felt, however, during the Russo-Japanese War. Thus, in 1902 construction of the Circum-Baikal Railway began.

The lake shore between the Port Baikal and Kultuk stations was a rocky ridge (50 miles long) rising a quarter-mile above the lake. Almost nine miles of retaining walls were built along the route, along with 445 steel bridges, six stone viaducts, 47 rockfall protection galleries and 39 tunnels totaling 4.5 miles in length.

There was nothing in the world that could match this section in terms of the cost, scale and difficulty of its construction. Nevertheless, it was completed in just two years and put into operation a year ahead of schedule.

In May 1908, the final decision was made to build the last stage of the Trans-Siberian — the Amur Railway. This is where improved track with gravel ballast was first constructed. It is also where the world’s first tunnel through permafrost was built, with an insulating layer between the rock and the lining of the tunnel.

Construction of the Trans-Siberian Railway across Russia was officially completed in 1916, during World War I, when the 1,353-mile-long Amur Railway was brought into operation.

The Trans-Siberian did not simply link Siberia and the Far East with the rest of Russia: it created a string of new towns and settlements in the most remote parts of the country. Today, the Trans-Siberian Railway is becoming one of the main tourist routes in Russia, along with Lake Baikal, Moscow, St. Petersburg and the “ Golden Ring ” of historic cities.

The biggest cities along the railway are Vladivostok, Khabarovsk, Irkutsk, Yekaterinburg, Nizhny Novgorod and Moscow. The new system for buying tickets makes it possible to take a hop-on-hop-off tour and spend a few days in each of these cities.

Ancient Vladimir sits on the banks of the River Klyazma, receiving and sending travelers to and from Moscow and Nizhny Novgorod. It is of special interest to tourists who want to know about the “ Golden Ring .” The city is a historic settlement, with an even layout and the classical architecture of the 18th and 19th centuries. However, Vladimir is also substantially diluted with typical infrastructure from the Soviet era.

Historically, Vladimir was a market town, since it was a trade route on the way to Nizhny Novgorod. Today, Vladimir is quite an industrial city. There are tractor plants, metalworking facilities, food factories, light industry, and much more. Despite all the industry, the city is still remarkably green and home to many parks.

Of most historical significance is, naturally, Vladimir's Kremlin. It is not a complex of buildings enclosed by walls: it makes up an entire region of the city, extending from the Golden Gate to Rozhdestvensky (Christmas) Monastery. In 1164, Vladimir was surrounded by a protective wall and a moat. The Golden Gate, built by Prince Andrei Bogolyubsky, is currently listed as a world heritage site by UNESCO.

Novosibirsk is the principal transportation hub on the Trans-Siberian Railway. The city was built on the Siberian Steppes at the beginning of the 20th century and thrived during the Stalin era.

Novosibirsk’s historic city centre is a collection of assorted buildings that almost all have the Soviet look about them.

As well as the large quantities of beautiful girls and snow, Novosibirsk has a colossal opera theatre with top performers, enormous railway yards, a beautiful bridge across the River Ob, a well-known zoo, a monument to engineering achievement in Czarist-era Russia, the University, and Akademgorodok (a huge education-based and scientific suburb with laboratories, research centres, residential areas and excellent infrastructure).

The main thing to bear in mind when heading to Novosibirsk in the winter is that Siberians certainly do feel the cold, but they dress warmly – even when it’s uncomfortable or unfashionable.

Krasnoyarsk is one of the major stops for travelers on the Trans-Siberian Railway. Indeed, it is a good place to break up the journey: it can be a peaceful place in which to pass a day or two, or you can take part in extreme sports.

One of the principal draws of this Siberian city is the Krasnoyarsk Stolby Nature Preserve and Bobrovy Log ski resort. It would be quite easy to pass a whole day in Krasnoyarsk just walking around in the nature preserve. At the top of the mountain you can have lunch in splendour, looking out across the tops of thousands of Siberian pine trees below.

The city of Krasnoyarsk itself is also quite a pleasant place to simply wander around. There are several coffee shops in the main part of town that serve decent snacks – which makes up for the lack of Internet connectivity. There is also a range of restaurants serving a variety of international food: the obligatory sushi place is augmented in Krasnoyarsk by Chinese and Indian cafes.

Yekaterinburg , 33 hours east of Moscow by train and beyond the Ural Mountains, is located on the cusp of Europe and Asia. The imaginary dividing-line cuts through 12 very real obelisks that mark the border along the Urals Mountains ; one of these obelisks is located 10.5 miles from Yekaterinburg.

During the Soviet era, Yekaterinburg (then known as Sverdlovsk) was a centre of industry. Today it is probably best known as the place where the last czar , Nicholas II, and his family and servants met their end at the hands of the Bolsheviks in 1918. Ipatiev house, where the deed was done, was torn down in 1977 on the orders of Boris Yeltsin .

Yekaterinburg feels like a mixture of Russia’s two biggest cities: it has the hustle and bustle of Moscow, combined with the pre-revolutionary architecture, water and green spaces of St Petersburg. This side of the Urals, city authorities seem to have made more of an effort to preserve the city’s wooden houses, which nestle side-by-side with towers and two-storey buildings, giving the city a different feel than many others in Russia.

Irkutsk is one of the great travel-hubs on the Trans-Siberian route and the point from which it is possible to explore the great Lake Baikal . Lake Baikal is listed as a UNESCO World Heritage site and was also voted as one of Russia’s Seven Wonders. It’s not hard to see why.

Buses or minivans to Olkhon Island on the western shore of Lake Baikal depart from right outside the main railway station in Irkutsk . The houses on the island are wooden and battered, and it is clear that tourism is the main source of income here. Trinkets from (relatively) nearby China, leather goods and carvings from the lake and from Irkutsk are on sale in the few tourist shops. Traditional Russian clothing such as “valenki” – felt boots designed for the harsh winters – is also popular.

Residents of the European part of Russia consider Vladivostok the end of the country, but natives of Vladivostok see the city as the beginning – after all, the sun rises in the East. When construction began on the Trans-Siberian Railway, the foundation was laid in Vladivostok.

When Soviet Premier Nikita Khrushchev visited Vladivostok in 1959, following a trip to the United States, he declared that the then-closed city would be a “Soviet San Francisco.”

The city makes up for any inconveniences by offering countless opportunities to see the region’s varied landscape from pretty amazing views, which are available from almost every rooftop. The most popular place to see the city, however, is the viewing platform by the funicular railway on Orlinaya Hill.

The Soviet place names, a number of remaining pre-revolutionary buildings, the 21 st -century bridges, and the right-hand-drive vehicles in left-hand traffic all create an unusual colour that is impossible to find in any other Russian city.

With a total of 6.7 million people, Khabarovsk is one of the most sparsely populated territories in the world. The city consistently ranks as having one of the best business environments in Russia in various polls, and this is illustrated by the cafes and shopping malls that dot its city centre. Here you can see skyscrapers under construction at several locations, as well as women carefully watering flowers that hang at the tops of lamp-posts from a special elevated machine.

Perm is located on the River Kama– the fifth largest river in Europe after the Volga, the Danube, the Ural and the Dnieper.

There are many places to go in the city, including the Art-Perm Gallery, with its abundance of exhibitions, and the “Perm-36” Museum of the History of Political Repression. The latter was formerly a camp and training school for those convicted of especially dangerous crimes against the state.

There are also different types of theatre in Perm – The Perm Theatre of Opera and Ballet, The Perm Drama Theatre and the Youth Theatre. The famous theatre figure Sergei Diaghilev spent his childhood and adolescence in Perm. Diaghilev's “Russian Seasons” (“Les Ballets Russes”) – introduced in Paris at the beginning of the 20th century – fixed the names of Russian ballet dancers in the history of world culture.

In previous centuries, Nizhny Novgorod was an important economic, transportation and cultural centre of Russia, located at the strategic confluence of the rivers Oka and Volga. Much of the city downtown was built in the Russian Revival and  Stalin Empire architectural styles .

The art museum in Nizhny Novgorod was opened to the public in 1896. It has an extraordinary gallery which has hosted more than 12,000 exhibits, as well as an enormous collection of works by Russian artists such as Viktor Vasnetsov, Karl Briullov and Ivan Shishkin. However, what makes this gallery extremely important is the amazing collection of Russian avant-garde art, with works by Kazimir Malevich and Wassily Kandinsky.

The Nizhny Novgorod Kremlin is the central part of the ancient town and occupies a relatively small area on a hill. Originally, the Kremlin wall was about 1.5 miles long – around 600 feet shorter than that of the Moscow Kremlin. Eleven of the original 13 towers survive today.