Tourism in Russia: The competition increases 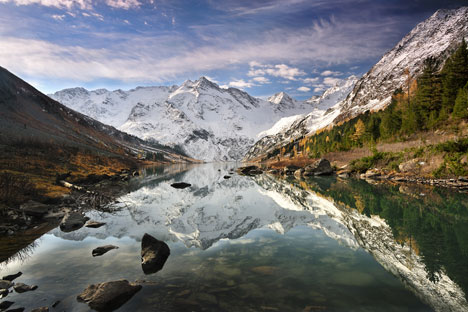 Altai is one of the most dynamic regions in Russia that has a good chance to become an attractive destination for tourists. Source: Lori / Legion Media

The strict visa requirements and the size of its territory remain the major obstacle in attracting tourists for Russia.

Prime Minister Dmitry Medvedev believes Russia is on track to become one of the 20 most popular tourist destinations in the world. For the moment, the country has trouble attracting tourists, largely due to the strict visa requirements and the size of its territory.

The Russian Federation has dropped four places in the Travel and Tourism classification, which was established by the World Economic Forum and is based on comparative competitiveness between countries. Russia is now in 63rd place, as revealed by the study published in early March 2013. This puts Russia a long way behind Switzerland (1st), France (7th) and even countries such as Chile, Uruguay and Saudi Arabia.

The dwindling performance can be explained by security hassles and the difficulty of access to tourist sites (excluding Moscow and St. Petersburg). The World Economic Forum, which publishes this classification once every two years, also points to the inefficiency of government policy on tourism and the visas required for visitors from many countries, including those in the West.

On March 19, at a meeting devoted to tourism, Prime Minister Dmitri Medvedev reacted to the classification, considering it as “not a failure,” but as being mainly due to the huge efforts deployed by competitors.

“According to the experts’ forecasts — let us hope that they are right — Russia could become one of the top 20 most popular countries for tourists,” said Medvedev.The gigantic size of the Russian territory is a disadvantage in this respect. Access to regions with great tourism potential (such as the Kamchatka peninsula, the Altai, Lake Baikal and the Caucasus) involves long flights — many of which are not even direct.

These locations are considerably far away from each other, and even the airports are a long way from the places of interest. Furthermore, the condition of the road infrastructure still leaves a lot to be desired — to say nothing of the high number of road accidents. On the positive side, there has been major progress in air and rail transport.

Although Russia has earned fewer points in the Travel and Tourism classification, there has been a palpable increase in the number of foreign tourists. There were 10 percent more in 2012, exceeding 2.5 million for the first time, according to the Rostourism Agency. The most frequent visitors were Germans (375,000), followed by Chinese, British, Finnish, Italian and Turkish tourists, with French visitors in eighth position (100,000).

Due to their remoteness, the country’s magnificently wild and natural environments are often overlooked.

Only the “Golden Ring” surrounding Moscow (including the cities of Suzdal, Vladimir and Yaroslavl), as well as Karelia (not too far north of St. Petersburg), have benefitted from foreign visitors.

“We see very satisfactory development in the Golden Ring, with much better hotels available than in previous years,” says Benoit Lardy, chairman of the French travel agency Tsar Voyages, which specializes in Russia. “There is excellent value for money. And the transport infrastructure is improving.”

The entrepreneur also mentions Karelia as a booming destination, along with the city of Kazan. As Lardy explains, Russia is not a restful destination, but a cultural one: “The first request by our clients, apart from the usual tourist attractions, is to attend performances at the Mariinsky and Bolshoi theatres, and visit the homes of the great writers that have been turned into museums.”

Certain other remote regions are beginning to realize their tourism potential. Benoit Lardy quotes Kazan as an example of a city that is making an effort to attract tourists. “Baikal is also a thrilling name for both winter and summer trips,” says Lardy.

Pavel Morozov, director of the French ID-réel Agency that offers advice to local authorities quotes three examples of the most dynamic regions or cities in Russia — Kazan, Veliki Novgorod and the Altai. This last region has seen significant expansion since the Russian airlines introduced a seasonal, direct link between Moscow and Gorno-Altaisk.

Not all of Russia’s mountainous regions are in the same boat, though. Problems of separatist unrest and lack of security have thrown a dark shadow over the incomparable charm of the Russian Caucasus. Needless to say, the 2014 Winter Olympics in Sochi will be crucial for sweeping the clouds away.