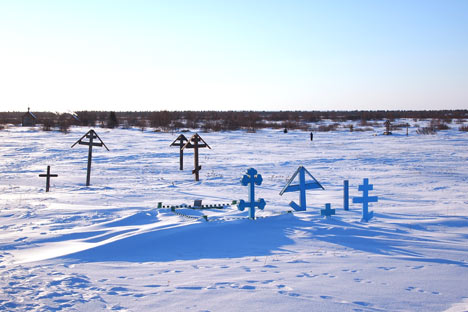 One of the most notable landmarks in the Russian Polar region is the town of Pustozyorsk, a snowy wilderness that has a cemetery, but not a single house.

Although the city was founded in the late 15th century, it was entirely abandoned in the middle of the 20th century. There are no roads leading to Pustozyorsk; the only way to get here is by boat or mountain bike during the brief summer, or by snowmobile in winter. But even so, it’s worth the trip. Complete emptiness might be just as memorable as rocks or logs.

View Pustozyorsk: A ghost town in Russia's Polar region in a larger map

There's very little left of the monument and protected natural region of Pustozyorsk. An obelisk remains, telling visitors that there was once a town here. A memorial cross marks the spot on which Arch-Priest Avvakum was burned at the stake for heresy.

And a little off to the side, having been built without foundations and resembling more a couple of log cabins, stand an Old Believer's Chapel and Refectory. The last of the ghost town's possessions is a lone cemetery.

When the last residents left, they either left their homes behind or dismantled them and floated them down the river with them. Any homes left standing were used as firewood by the few who stuck it out to the last.

In the Arctic Circle, wood is a precious commodity. The emptiness is oppressive, especially when we bear in mind that, when the town was here, it had only two reasons for existing – either to prove it could be done, as with all remote pioneer settlements, or as a place of punishment.

The last resident of Pustozyorsk packed her bags in the early 1960s, took her log-cabin down in pieces, floated it down the Pechora River and re-erected it in the nearby village of Ustye. Pustozyorsk was struck off the list of inhabited locations, and five hundred years of history came to an end.

You can fly to Naryan-Mar from Moscow, St Petersburg or Archangelsk. Once there, you need to find the Pustozyorsk Museum, which is located at Ul. Tyko Vylki 4, and the museum staff can then take you to the ghost town of Pustozyorsk.

The settlement was founded in 1499 on the decree of Grand Prince Ivan III. It was needed for several reasons. The Princedom of Muscovy, or Moscow, had only recently been at war with Veliky Novgorod, and all of the northern lands from the Baltic Sea to the Urals either belonged to the Republic of Novgorod, or were in its thrall.

It was time to re-establish control. Almost simultaneously, Muscovy brought both Perm and a huge section of the Urals to heel. Yet the best of the trading routes with Siberia still lay in Tatar hands, mostly with the Khanate of Kazan.

This is why the northern winter route was of strategic value. The peoples of the north-lying forests – and Pustozyorsk lay beyond the boundary of the tundra – relied on Moscow as a market for their exports of pelts and animal skins, and the fortress-city was necessary for them as a place to pay their tithes.

In early 1960s, Pustozyorsk was struck off the list of inhabited locations, and five hundred years of history came to an end. Source: Semyon Kvasha

An ostrog, or wooden fortress, was established at Pustozyorsk at the end of the 15th century. And by the 17th century, the village boasted a population of around one thousand people, quite a large number for those times. Soon the city became used as a prison, and a place where exiles were sentenced.

The Old Believer leader, Avvakum Petrov, was jailed here after being sentenced as one of the leaders of the Schism – a religious and spiritual civil war that was Russia’s substitute for Reformation and Protestantism.

Avvakum – the first Russian writer to have produced astounding memoirs – sat out a 12-year jail term in atrocious conditions, in mud, water, and frost, before being burned at the stake for refusing to abandon his religious beliefs.

It’s really the only thing for which Pustozyorsk is known for in Russia, although that goes down poorly with the hierarchy of the Russian Orthodox Church.

Meet the people who still live in Russian ghost towns

“It’s very bad that the young people of today have such a faulty knowledge of their own history, that for them Pustozyorsk is associated with the imprisonment and execution of Arch-Priest Avvakum. Actually, the whole thing is nothing like that at all!

If we take this completely warped kind of view of history, then instead of talking about Suzdal as the very flowering of the genius of the Russian Orthodox Church, of beautiful architecture and iconography, we could probably say that Suzdal too – and the Solovki Islands Monastery as well – were places of imprisonment and execution of a few State criminals,” opines Bishop Iakov of Naryan-Mar and Mezensk.

The town museum of Pustozyorsk is actually located in the city of Naryan-Mar, 20 kilometres away from what is now just a landmark. Source: Semyon Kvasha

The rot set in as early as the 18th century. The course of the river became diverted, the water became shallower, and large commercial barges no longer went along it.

The main trade routes moved south. The fur-giving animals were dying off, and so people began to leave. By the early 20th century, the town had dwindled to a village. And by the 1960s, there was no one left here at all in the register of inhabited locations.

The town museum of Pustozyorsk is actually located in the city of Naryan-Mar, 20 kilometres away from what is now just a landmark. It’s in an abandoned film archive, with dusty boxes of film reels that can’t be thrown away. But the museum is properly financed.

The District administration gave it two snowmobiles and a sleigh so that they could offer excursions to Pustozyorsk in the winter; special clothes and boots, in which the museum staff lovingly clad their tourists; and modern bikes and boats for running summertime excursions, because there’s no proper road there.

Soon the museum plans to restore the Pustozyorsk church. It’s a plastered and stone-clad painted wooden church that was taken to the village of Ustye from Pustozyorsk in the early 19th century, where it quietly mouldered.

Now, however, the Pustozyorsk museum has received a grant for its restoration, since building in the village itself is now completely prohibited. In Ustye the museum also plans to build a museum village with a tea-house and guest-house – the museum staff are full of optimism about this.

And there is certainly no shortage of visitors wanting to see the emptiness and the cemetery of a once-prosperous city-cum-place-of-exile for themselves, despite its current level of decay.