What to do in Magadan: A far-flung town in Russia’s Far East 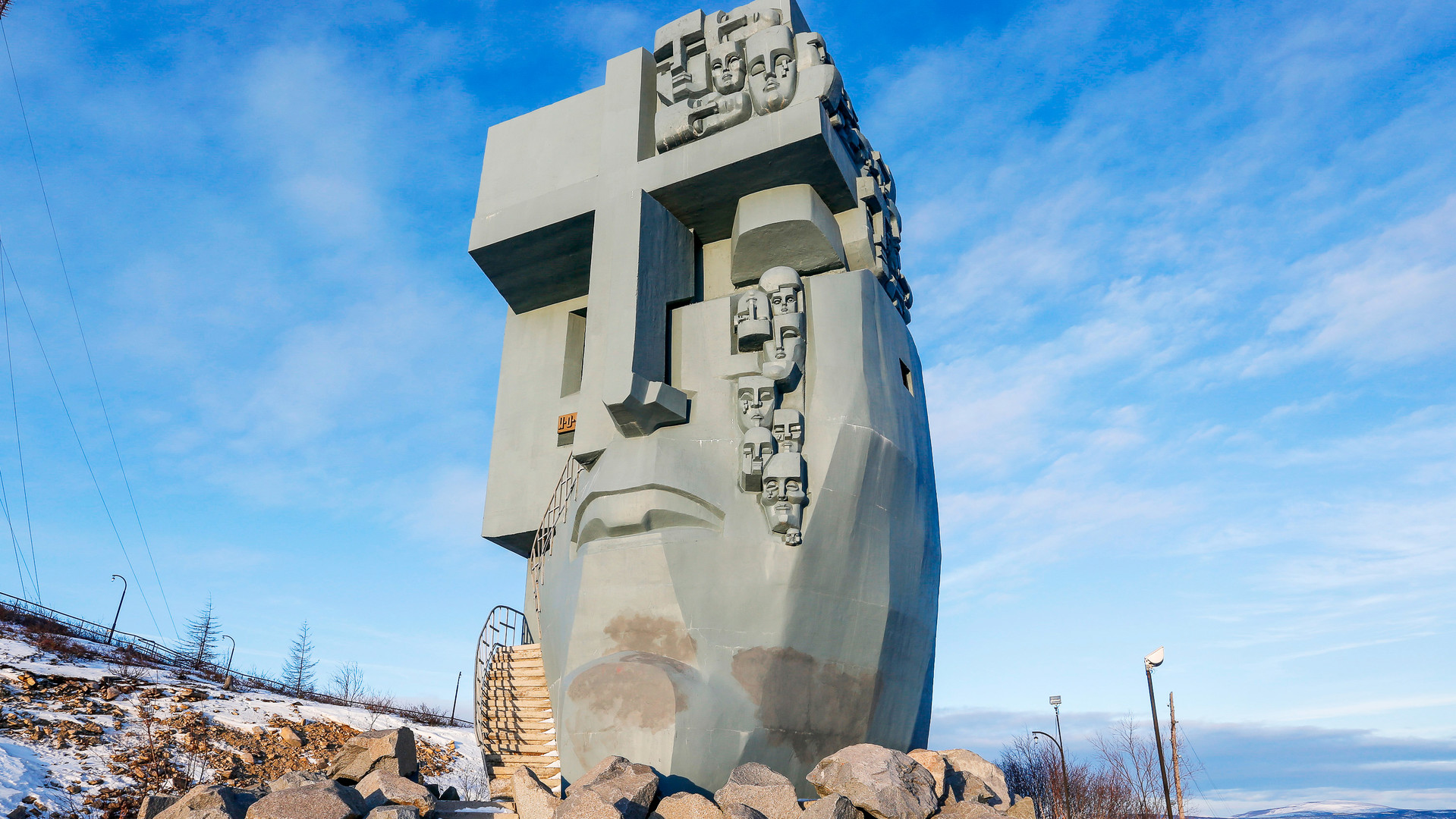 The Mask of Sorrow memorial in Magadan commemorating victims of political repression.

Alexander Krylov/RIA Novosti
While it may not be an obvious tourist destination, the capital of the Kolyma Region in the Far East has a lot to offer travelers — from its miraculous natural surroundings to an assortment of museums and monuments inside the city.

“Life here is different from what other Russians have on the continent,” locals in Magadan often say. If you react to this with surprise, because their city (6000 kilometers east of Moscow) is definitely not an island, they’ll just laugh.

Their home region of Kolyma, sitting between the basin of a river with the same name and the northern shore of the cold Okhotsk Sea, does indeed resemble a separate island — no trains go there, and the closest big city, Yakutsk, is 2000 kilometers to the west. The only reliable way to get to this remote place is by plane — either from Moscow or the cities of Siberia and the Far East (Vladivostok, Khabarovsk, Irkutsk and so on).

“We live on Planet Kolyma, and it’s very special,” the citizens of Magadan proudly proclaim. And they are right — though distant from almost every big city in Russia (for instance, they are even 2000 kilometers northwest of Vladivostok), Magadan is home to some treasures that any traveler who makes it to “Planet Kolyma” will be thrilled to discover.

The St. Petersburg of the Far East 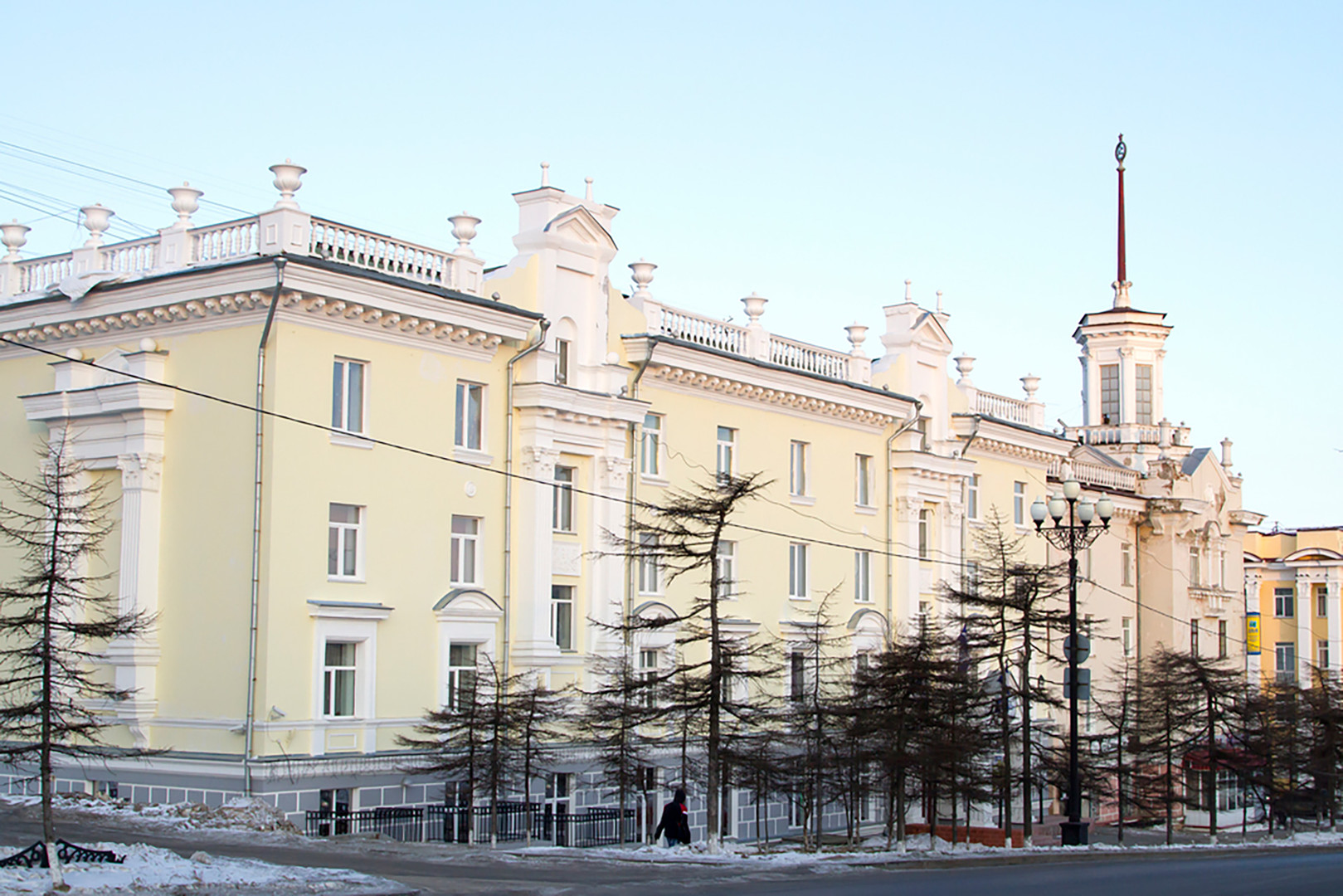 Building with a spire on the main street of Magadan on December 19, 2014.

“Magadan is a small Leningrad [former name of St. Petersburg],” was what Farley Mowat, a Canadian writer who explored Soviet Kolyma in the late 1960s, used to say. And these cities do have some things in common — in addition to being situated on the same latitude.

The authorities who built Magadan also paid great attention to architecture. Built in the 1930s, the buildings in the historical center were designed in the Stalinist Empire style, which includes elements of Baroque style.

Walking through the center of Magadan, visitors can imagine what it was like in the 20th century when both gulag prisoners and volunteers struggled with the brutal climate as they worked to build this beautiful city in the land of the permafrost. 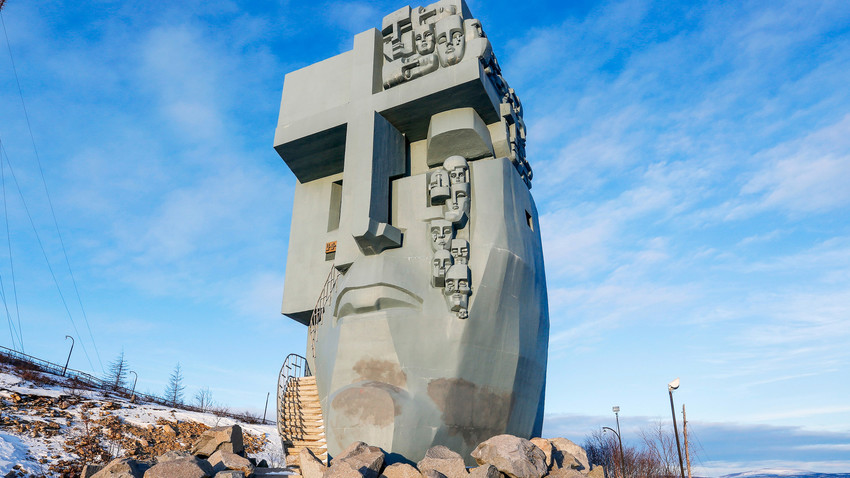 The Mask of Sorrow memorial in Magadan commemorating victims of political repression.

During Stalin’s reign, Kolyma was a land of repression. Hundreds of thousands of people were sent there to work in labor camps where they mined gold, tin and uranium for the state while dying of cold, hunger and guards’ bullets. Somewhere between 120,000 and 130,000 people perished there.

Perhaps unsurprisingly, it was near Magadan that a monument to the victims of the gulags was built in the 1990s. The 15-meter-high concrete “Mask of Sorrow” is perched on a hill near the city.  Depicted as a crying face, with the tears made up of smaller and smaller crying faces, the “Mask” symbolizes eternal grief and reminds its viewers of the intolerable violence that Kolyma witnessed during the Soviet era. The impression it leaves is hard to forget.

The location of the “Mask of Sorrow” is quite far from the city center, but it’s easy to book a bus or car trip there, which you can do at the local museum.

Museums revive the past

Speaking of the museum, it’s definitely worth a visit. The Magadan Regional Museum of Local History (55 Karl Marx Ave.) exhibits collections devoted to the history of the gulags (again), the natural history of the region and, probably most interestingly, the life and history of the indigenous populations of the Far East — the Evens, the Chukchi, the Eskimos and others. Here you can observe how these tribes used to live, long before Russians arrived in the remote lands of the Far East. 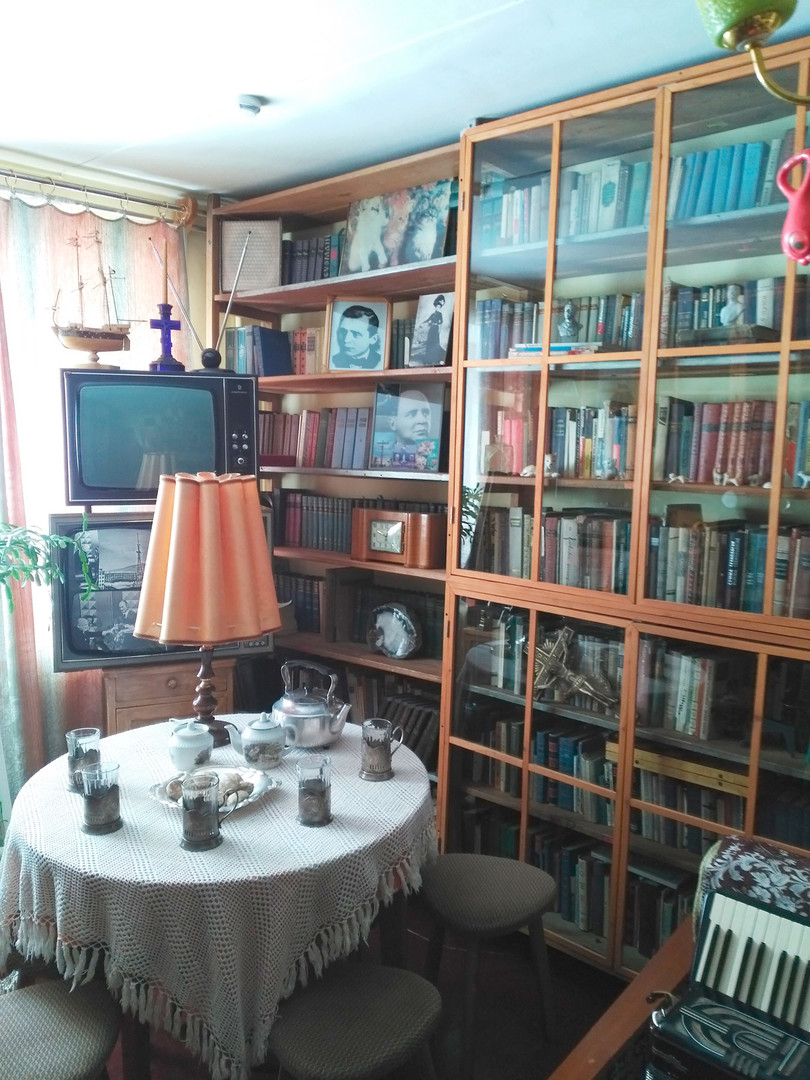 There are other interesting museums in Magadan as well, namely Vadim Kozin’s Memorial Museum (1 Shkolny Lane). Kozin was a famous Soviet singer of the 1930s who fell into disgrace and was sent to Kolyma as a prisoner. He stayed there even after he was released and lived a long life, dying in the 1990s. His apartment is probably one of the most “Soviet” places in the world, with giant bookcases and endless pictures of kittens.

Dreams of the hills and seaside

Magadan surely has beautiful places, but to see the most spectacular views you’ll have to leave the city. Don’t worry — it’s not too far away. If you long to see the sea, you can just follow either Portovaya or Nagaevskaya street from the center of the city and after walking for just 5-10 minutes you’ll reach the Nagaev Bay. The sea usually is too cold to swim, even in the summer, but local residents love to spend warm days there, enjoying the breeze and sunshine. 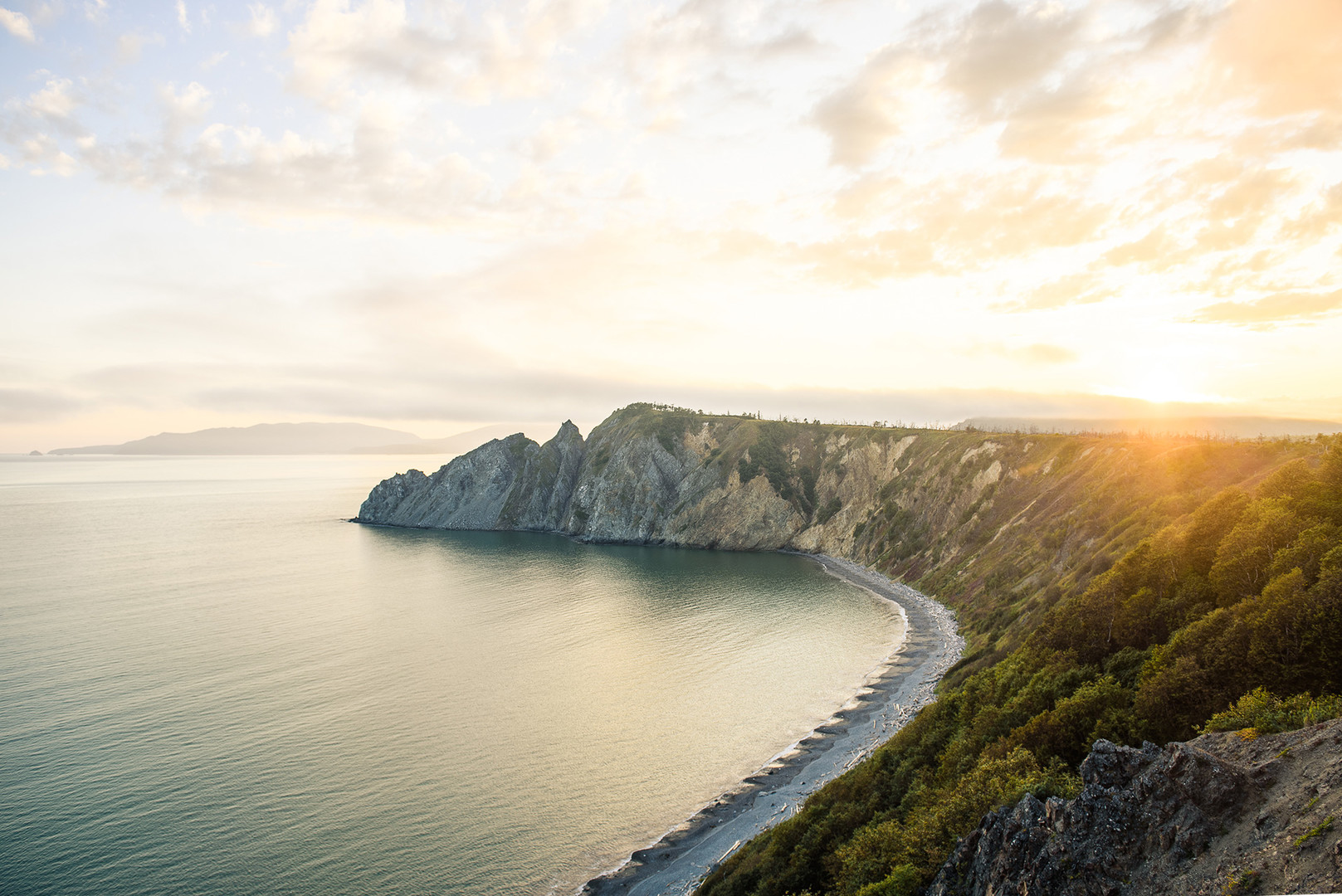 For those who still want more, there is another option: take a taxi from near the bus station (on Proleterskaya street) and catch a ride to Mys Nyuklya. There you will find an incredibly picturesque landscape — a long, sandy expanse extending into the Okhotsk Sea. Here, you can really feel that you are on an “island,” far away from every road with only endless miles of water ahead of you.

The city is surrounded by green hills and some of them are definitely worth exploring, especially the one where the so-called “Stone Crown” is located.  A unique, naturally-occurring rock formation, its peak resembles a crown and can be viewed from Nagaev Bay. The distance to the peak from the city is about eight kilometers, so it’s a good excursion for those who love hiking. After walking for a couple of hours, visitors will be rewarded with a gorgeous view of Magadan and the bay. 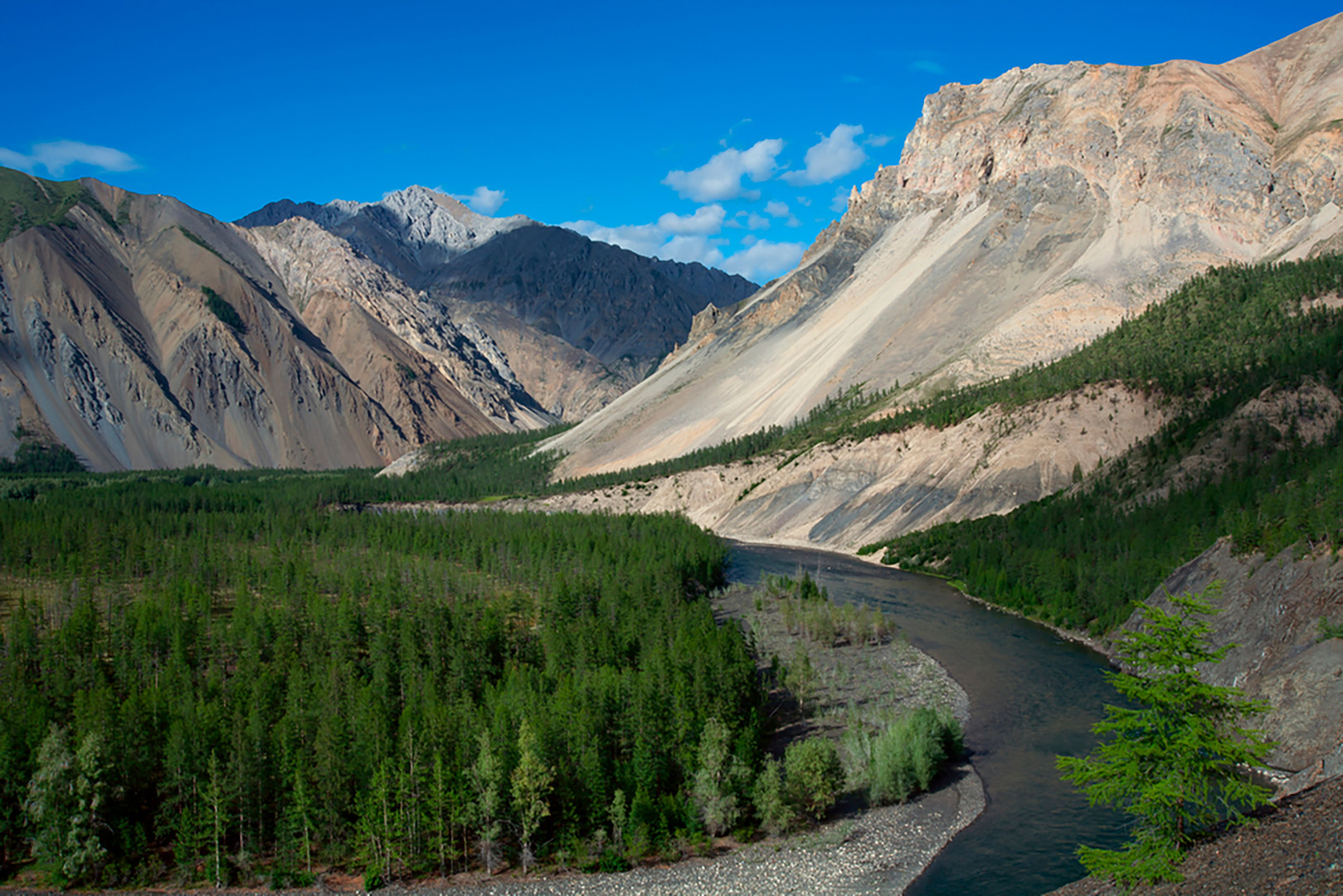 Of course, the season when you choose to visit Magadan matters a lot. If you don’t like extremely low temperatures (about minus 30 Celsius in winter) the best time to visit is summer or early autumn. “Our autumn is unbelievably beautiful,” says Vera Smirnova, the director of the Magadan Museum Complex. “The green hills slowly turn yellow and red; it looks like they’re burning with gold. It can be compared to the beauty of cherry blossoms in Japan.”

Read more:
A stage at land’s end: why do leading Russian theaters go to the Far East?
Monastery of Sts. Boris and Gleb in Torzhok: In memory of martyred princes
5 stunning historical places for a day trip in the Moscow Region
Take a walk down Svetlanskaya: 8 highlights of Vladivostok’s main street
Krasnodar: A hot spot for Cossacks, bourgeoisie and outdoor fans