St. Petersburg roof tours: A spectacular way to see the city is from above 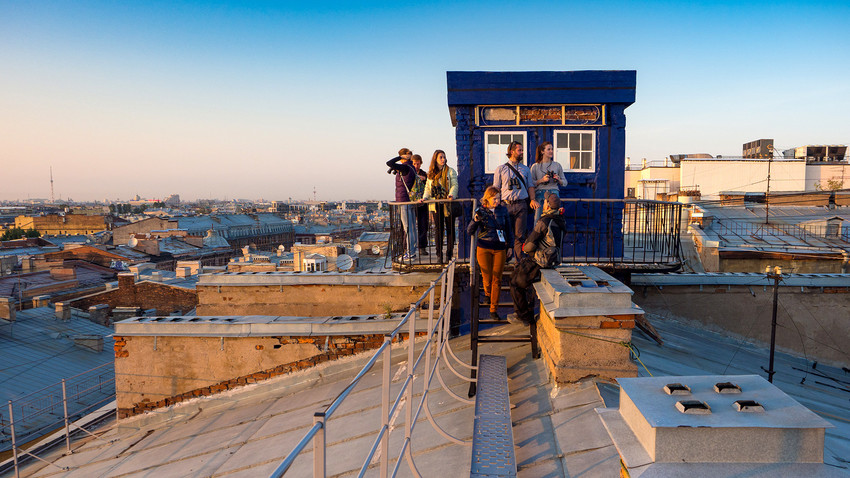 Ruslan Shamukov
There long have been dozens of illegal ways to climb onto the rooftops of buildings in St. Petersburg’s historical center, but now it’s legal. A Russia Beyond correspondent tried it on her own.

Seeing the city from above is a must when visiting St. Petersburg. Since the mid 19th century local law has limited building height, with the exception of churches, to that of the tsar’s Winter Palace (23.5 meters). Today, if you climb onto the roof of any six-storey building in the downtown, you’ll be able to see the glorious St. Petersburg skyline and its major architectural gems. 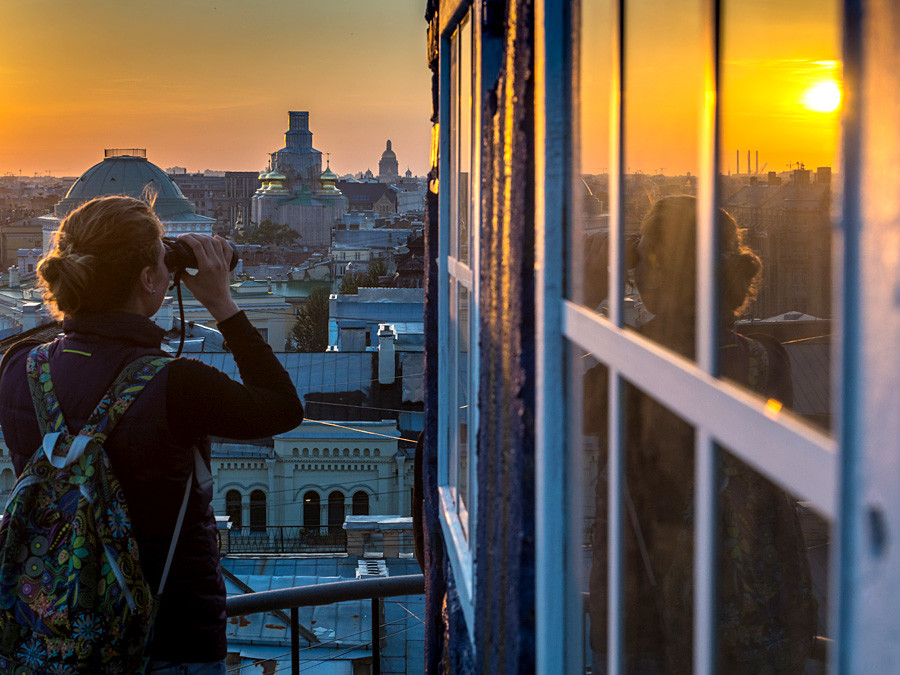 A rooftop tour has long been dangerous, adventurous and illegal. Visitors had to sneak into a stairwell and search for an open roof hatch because most were closed after August 1997 following the assassination of a city vice governor, shot by a rooftop sniper. 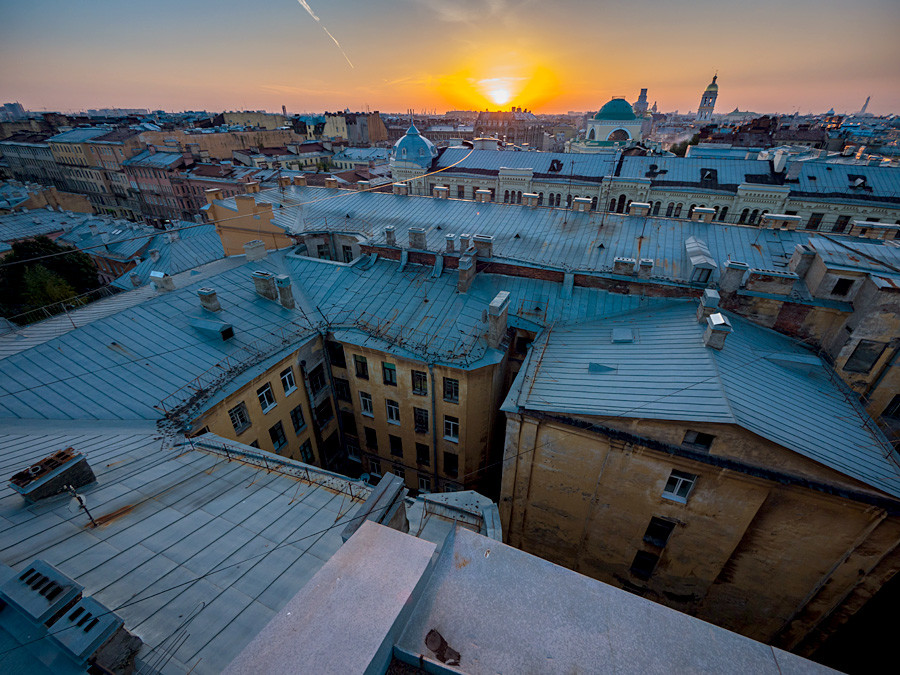 Also, residents didn’t want students to have rooftop parties, and for homeless people to live in the garret. Still, young people couldn’t be deterred from exploring the city in this manner, and you can see numerous ads (usually sprayed on sidewalks) for rooftop tours. 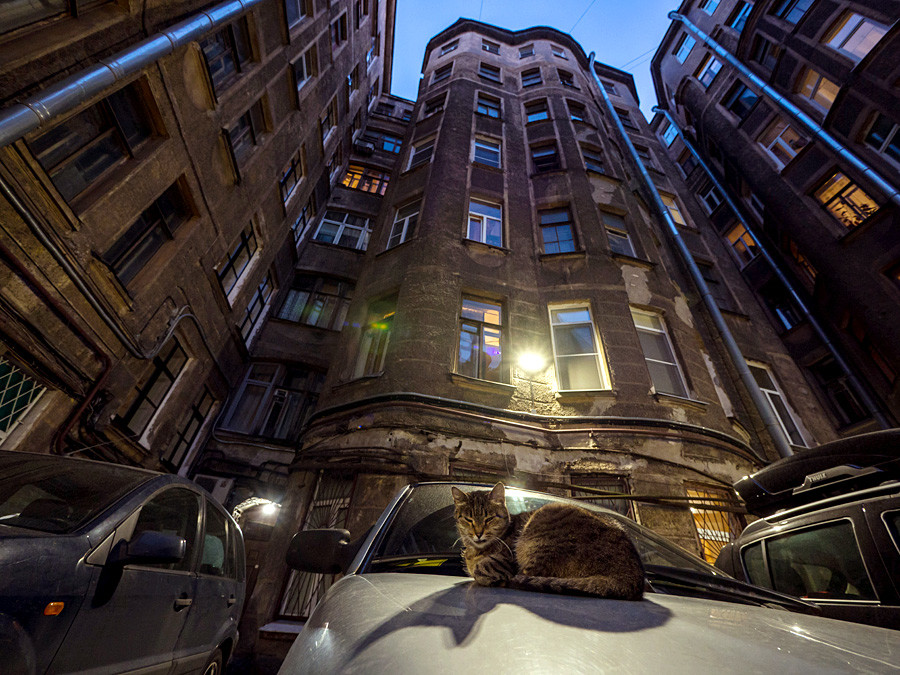 In May, the first official and legal roof tour was established. Organizers told Russia Beyond that it took one year to find a good location, collect all the papers and make agreements with city administration and police. The guided tours climb to the top of an Art Nouveau building at Ligovsky Prospect 65. Visitors do not disturb residents because they use a back entrance. 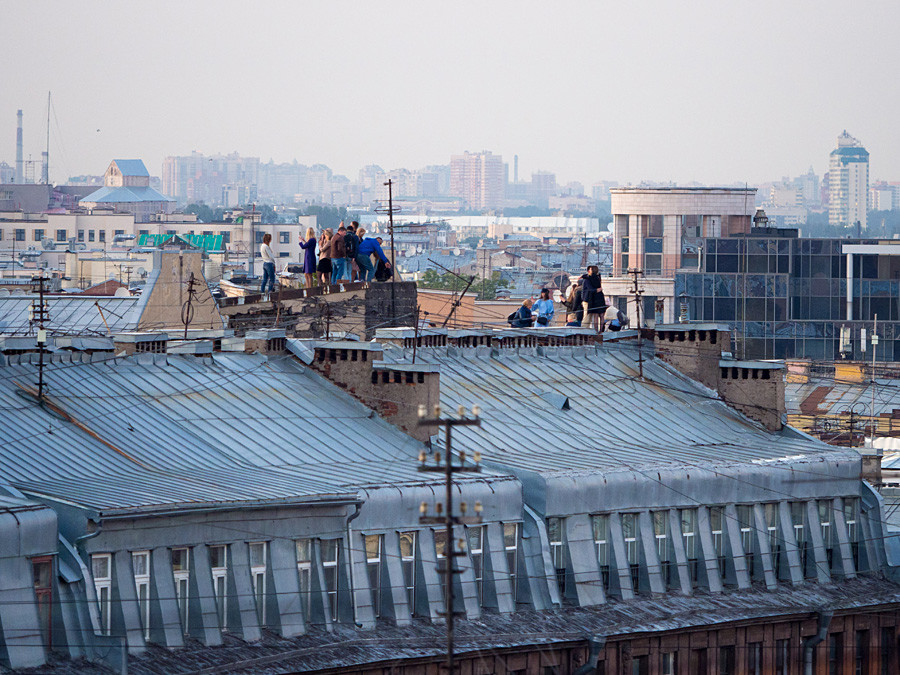 The building height is about 25 meters, which would be the 9th floor for a modern building. After signing a document that they were briefed about safety precautions, tourists arrive at the MPVO tower (air-raid protection post), which was built during the Second World War. 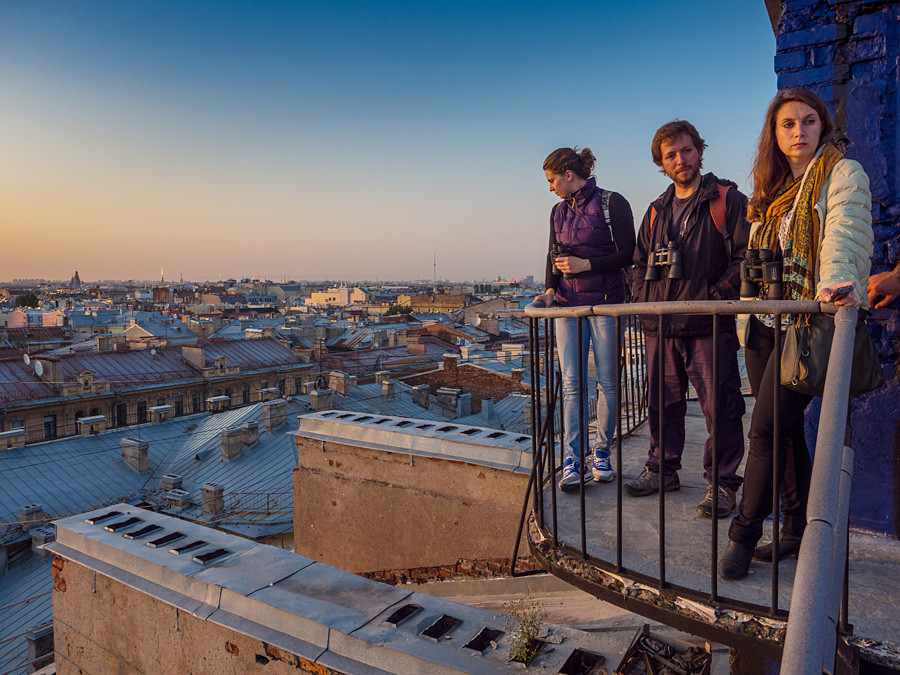 The roof has a favorable location on the border of the city’s historical downtown, and it’s only a five-minute walk from the Moskovsky Train Station. Visitors can easily recognize all major sites, including the golden spire of the Peter and Paul Cathedral, the domes of the Church on the Spilled Blood and the minarets of the Great Mosque. With the help of a spyglass small details are visible, and one can even see residential areas near the newly constructed Zenit Arena, which is about 10 km away. 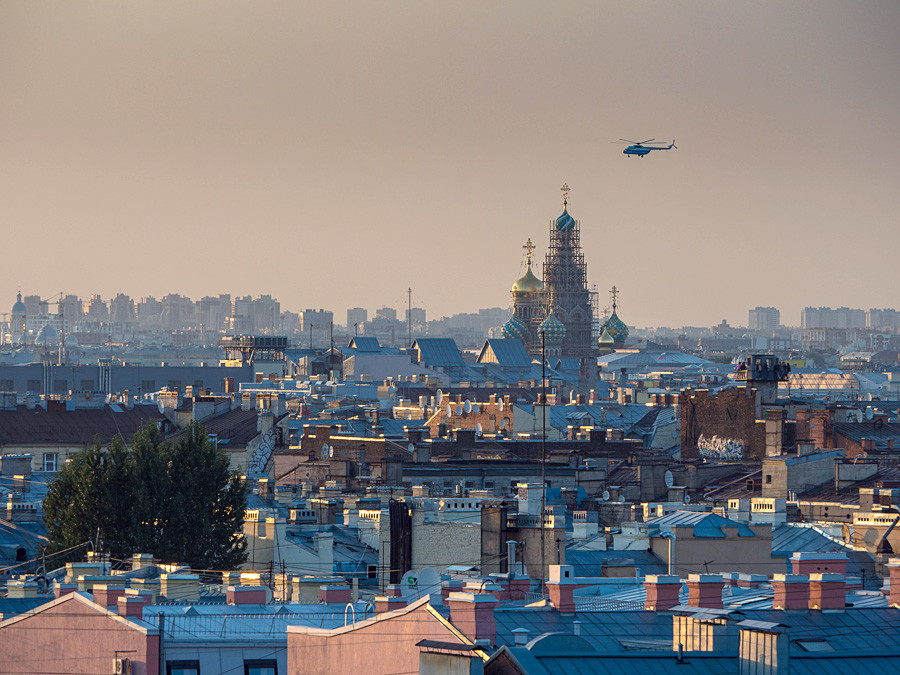 Another point of interest is the dome of St. Isaacs’s Cathedral (it also has an official observation deck, 43 meters high). According to city legend, in the early 1840s Tsar Nicholas I ascended its colonnade with his courtiers and wasn’t satisfied with the view of the empire’s capital. 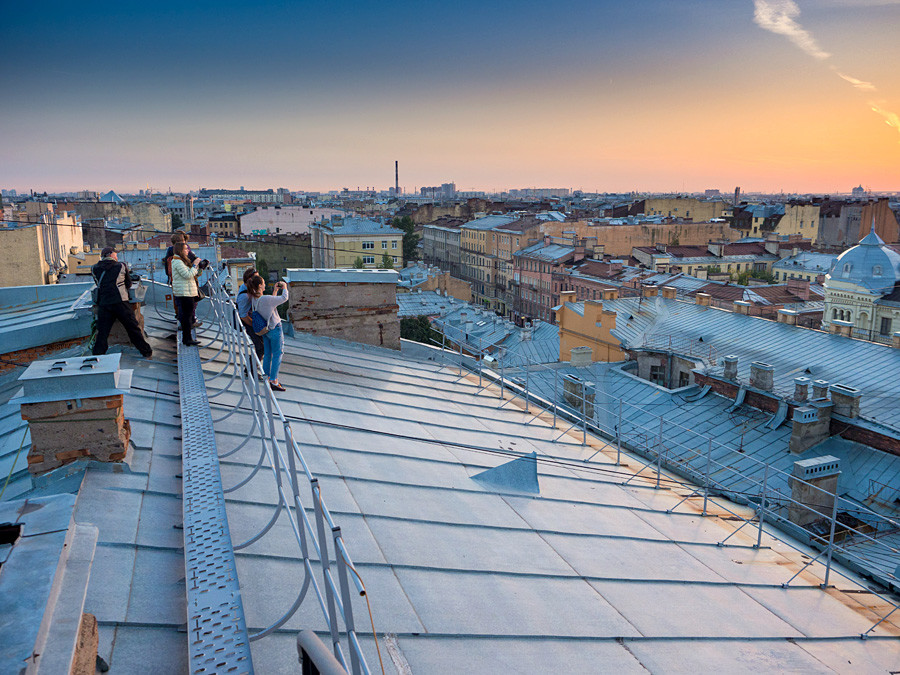 He didn’t like the height difference among buildings, so in 1844 he issued an order that the façade of any residential or state building shouldn’t be higher than the roof of the Winter Palace. About 205 upper floors were destroyed to adhere with the new law.

The rule was followed in the city center even after the 1917 Revolution, and today St. Petersburg tries to keep its imperial era skyline. There are limitations for each district and only Gazprom tower – the city’s first skyscraper – will become an exception, reaching 462 meters next year. 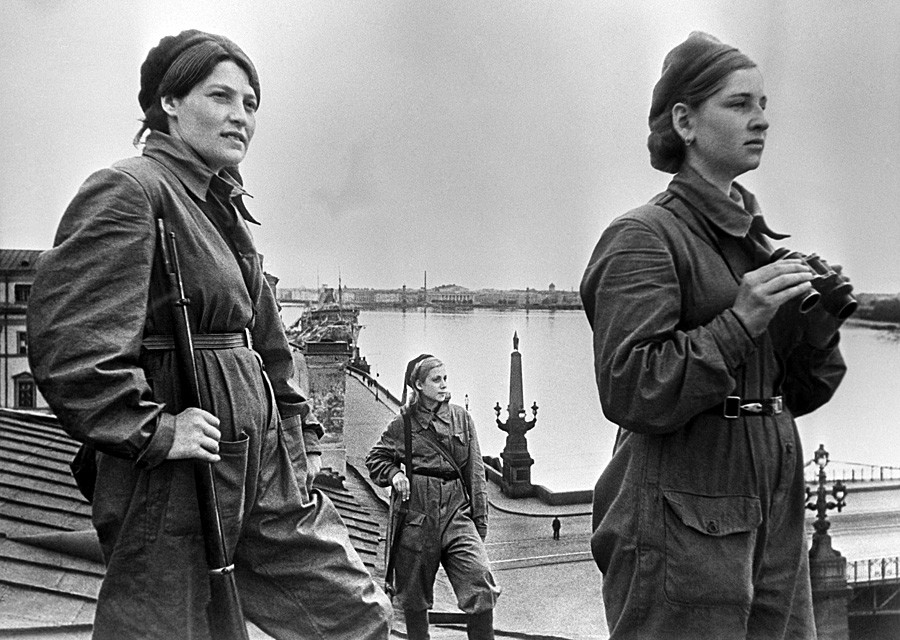 Several air defense towers are visible from the observation deck, and the guide offers detailed information about their role during the Siege of Leningrad. The city was first massively bombed on Sept. 8, 1941, with the Germans targeting factories and military bases, but then later they attacked residential areas. 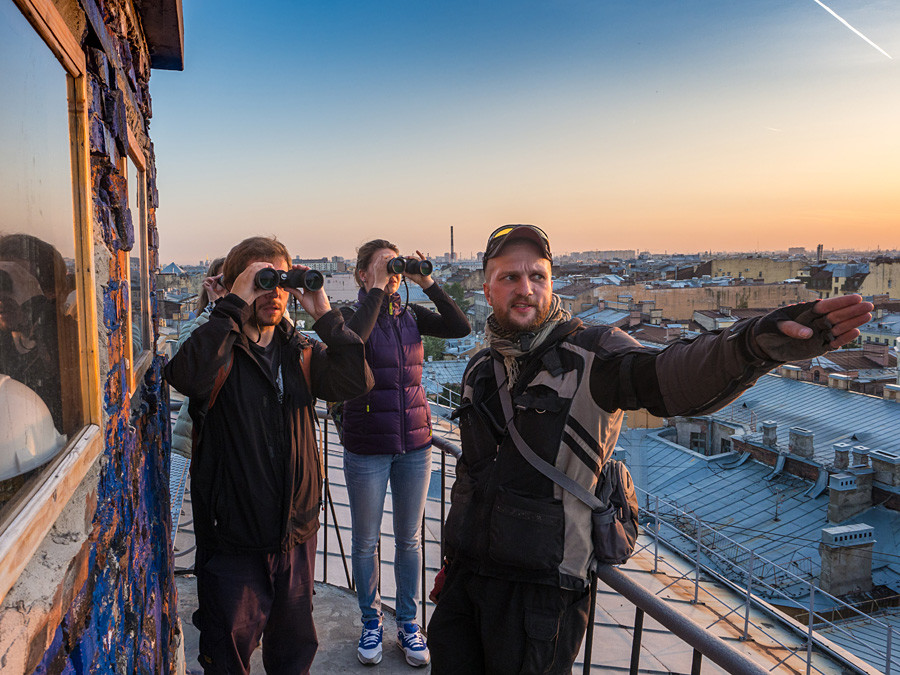 Usually, schoolboys and girls worked in air defense towers. “They worked eight hour shifts, and climbed these towers when they heard the air raid siren,” said the guide, Stepan. ”They had just 30 seconds to throw an incendiary bomb into the yard, or put it out with sand. Even today, I still find boxes with sand on garrets.” 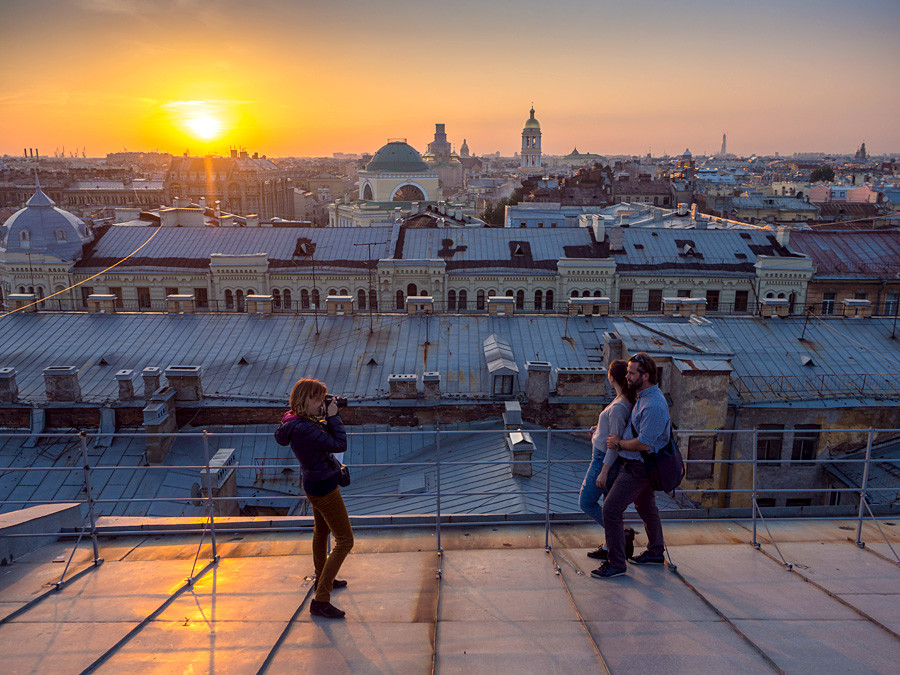 Since May, Stepan and his colleagues have greeted tourists from the U.S., Canada, the UK, Portugal, Spain and China. Visitors often come with a translator or local friend.

Since the tour requires prior registration, organizers can guarantee that the group will get an English-speaking guide. Tours will be available during the winter, but only on weekends. For more information and booking go to the website: panoramicroof.ru