7 tips on how to infuriate a Muscovite, or big city anti-etiquette 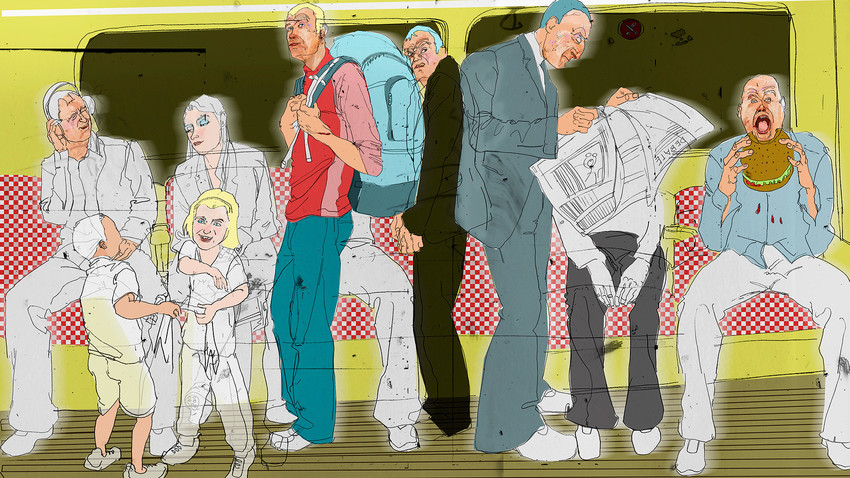 Getty Images
If you want to upset your Russian friends, keep tapping away at your phone while chatting, and speak as slowly as possible.

The big city dictates its own rules of etiquette. Muscovites, like other urban species, find lots of things annoying about other people’s behavior, even if it’s not deliberate.

7. Behave as if you’re the only passenger in the subway

When you're riding on public transport, don’t take off your huge backpack — let everyone see how trendy you are. If you have long hair, be proud and let it flow! Remember that the best place in the train is by the door, where you can lean on the seated person nearby — you'll both be warmer and happier as a result. And be sure to take up 2-3 places at once, since everyone else will be more than glad to stand after a whole day sitting in the office.

If you’re in the subway for the first time, don’t even think about studying the map in advance. The Moscow Metro is the most convenient and user-friendly transport system in the world. So just descend into the underworld and try to learn the Cyrillic alphabet while standing right at the foot of the escalator. Even better if you’re with friends—the more the merrier.

There are maps inside the trains too, usually conveniently placed above the heads of other passengers. What to do? Be sure to bend over the person sitting under the map (so they get a good smell of your trousers) and check you're going the right way. Never download the Moscow Metro app, available in English, Spanish, German, Portuguese, French, and Chinese.

6. Look more often at your smartphone when meeting with friends

Some Western restaurants prohibit the use of smartphones during meals. How vulgar! Thank God you’re in Russia. Every year the amount of online information is said to increase exponentially, so there’s no second to lose: you don’t want to miss a new meme or Instagram like in between bites of your food?

It’s a marvel of modern technology to be able to communicate with someone who’s not there, allowing you to ignore the people who are. Everyone should get to see how popular you are, and how many other, more important friends you have.

5. Speak as slowly and loudly as possible

Moscow, like any metropolis, is hectic. Everyone is on the move, and no one has time to chat with a random stranger. The city needs a calming influence, and that’s where you can help. Stop the fastest-moving person you can, and ask him or her about Moscow’s sights, parks, museums, pubs, restaurants, theatres, , weather, and anything else you care to learn about. Remember that not all Muscovites understand English, so try to speak as slowly and loudly as possible. All in all, make sure to waste as much of their time as possible, they’ll greatly appreciate it.

Outside tourist zones, also try not to hurry, especially when walking along narrow sidewalks. If you’re British, Irish, or Australian (or Japanese), forget that Russians drive — and also tend to walk — on the right. Don’t be afraid to go against the flow! They’ll be more than happy to give way to you — even if it means stepping into the middle of a busy road. Russians have a saying: “If it’s not a tram, it’ll go round.”

4. Phone more often for a chat

Who came up with the idea that you need to ask someone if they’ve got time to talk? Never text first, and don’t ask if you can call. Ring without warning and preferably without purpose, too. Whether the call recipient is working or eating or both, they will thank you for the distraction.

Many Muscovites remember their youthful days when friends would just pop by uninvited, or chat over the phone for hours and days without end. But now everything’s changed. Moscow has turned into a huge, faceless city, so it’s harder just to drop by. And many people are so tired of never-ending communication that they limit their telephone conversations, preferring the odd message now and then in social media.

Maybe you've heard about Russia’s ban on smoking, which is now illegal within 50 meters of subway and building entrances, and at bus stops and generally in public places. But who cares? Never ask your friends whether you can smoke, they’ll understand. By the way, there is a Russian superstition: if you light up, the bus will arrive sooner.

2. In shops, take your wallet out only at the checkout

Go to any store in the evening, choose the slowest queue, and never prepare your cash in advance. Pretend that you didn’t expect to have to pay for the goods. We also recommend packing everything as slowly as possible, so that people trying to buy alcohol before the 11 pm deadline will stay sober. You’ll be doing them a huge favor.

Especially in group chats when the whole company is texting, send everyone a voice message. Let them know that you’re a busy person and don’t have time to type a message. Don’t worry that someone might not have earphones or might not want to hear it on speaker phone. After all, why shouldn’t everyone on the bus or in the office hear your words of wisdom? Moscow's one big happy family, right? There are no secrets here.