10 of Russia’s most beautiful churches

Travel
Alexandra Guzeva
There are thousands of churches in this huge country, but we have (with difficulty!) selected the ones you absolutely must visit at least once in your life.

1. The Church of the Transfiguration, Kizhi Island, Republic of Karelia 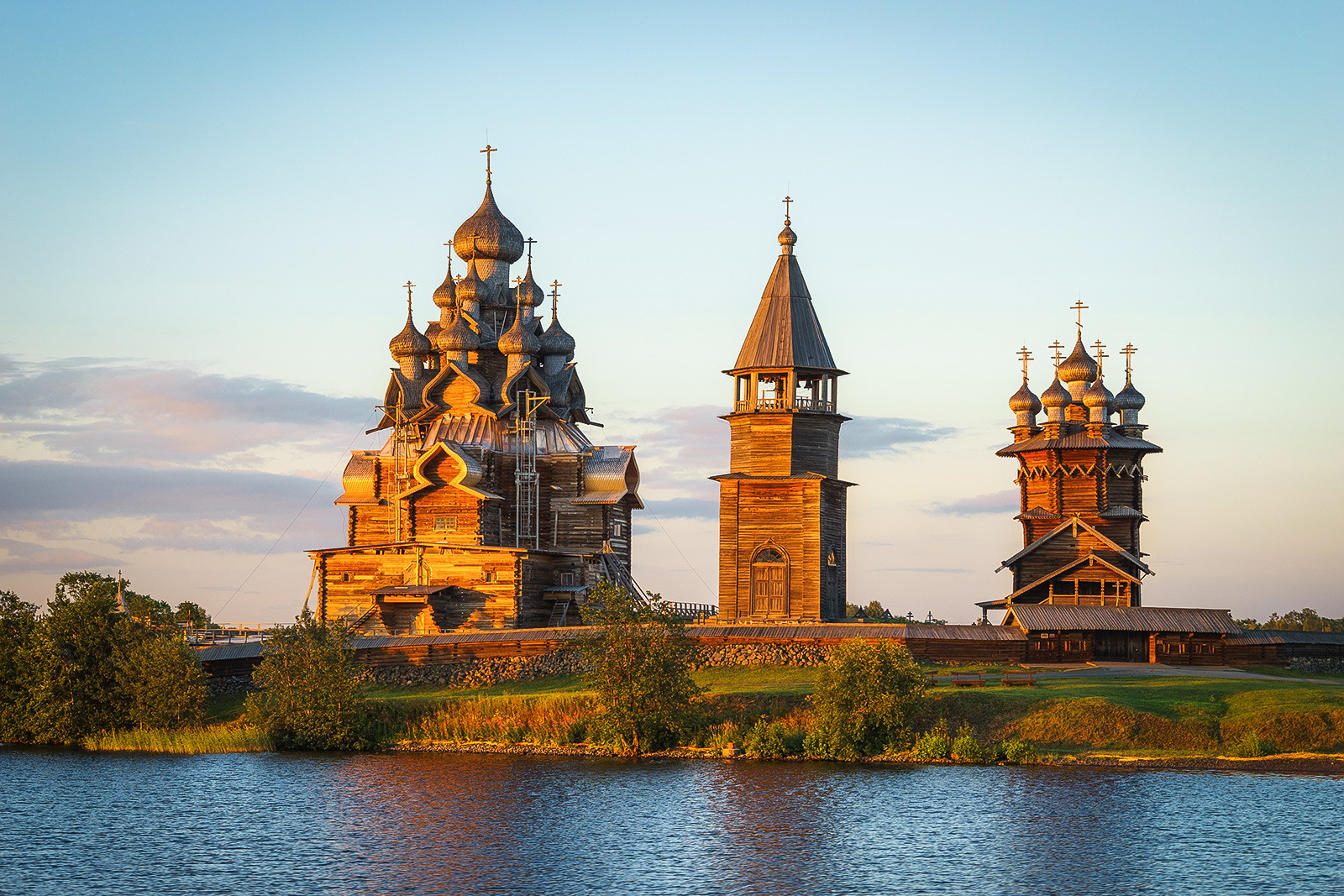 This gem of the Russian north dates back to 1714. According to the legend, its builder used just one and not a single nail in its construction. , he threw the into Lake Onega so that no one could repeat his achievement.

This octahedral multi-tiered church has 22 domes. Along with another wooden church, a bell tower a perimeter fence, it makes up the architectural ensemble of Kizhi Pogost, which is a UNESCO World Heritage Site. 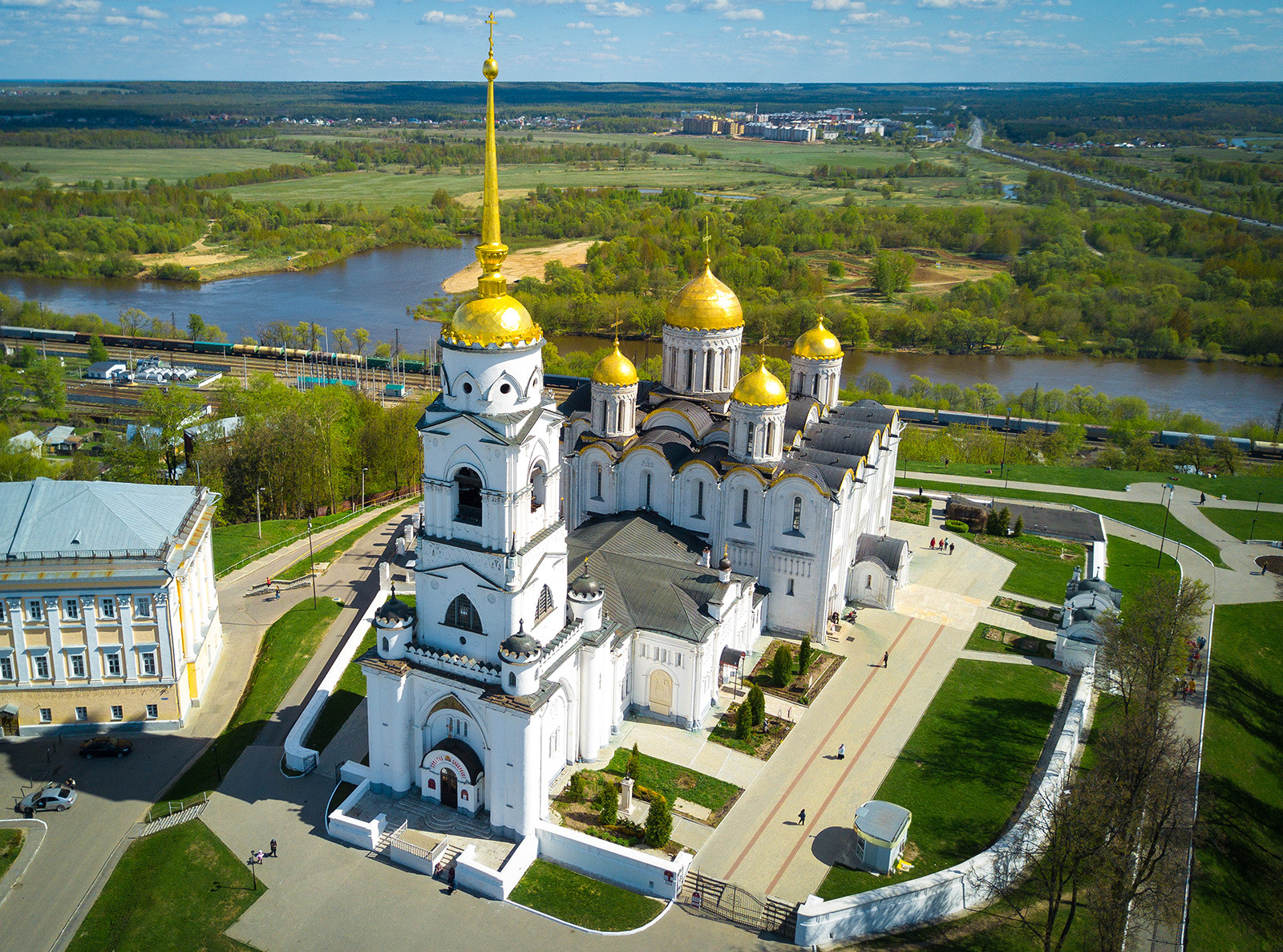 it not for historical happenstance, Vladimir could have ended up being the capital of Russia now, and then this church, rather than Saint Basil's Cathedral on Red Square, would be the most recognizable one in the country. Also on the UNESCO World Heritage list, the Dormition Cathedral was built in 1158 under Prince Andrey Bogolyubsky (also known as Andrei the Pious), who was the son of Yuri Dolgorukiy, the founder of Moscow.

All sorts of things have happened to the cathedral over its long history. In the early 13th century, for example, the Mongols set it on fire, and Prince of Vladimir's wife and daughter, who had been hiding inside, died in the flames. Then in the 19th century, frescoes by Andrei Rublev, the famous icon painter of the late 14th-early 15th centuries, were discovered by accident during restoration work.

3. The Church of the Intercession on the Nerl River, Vladimir Region 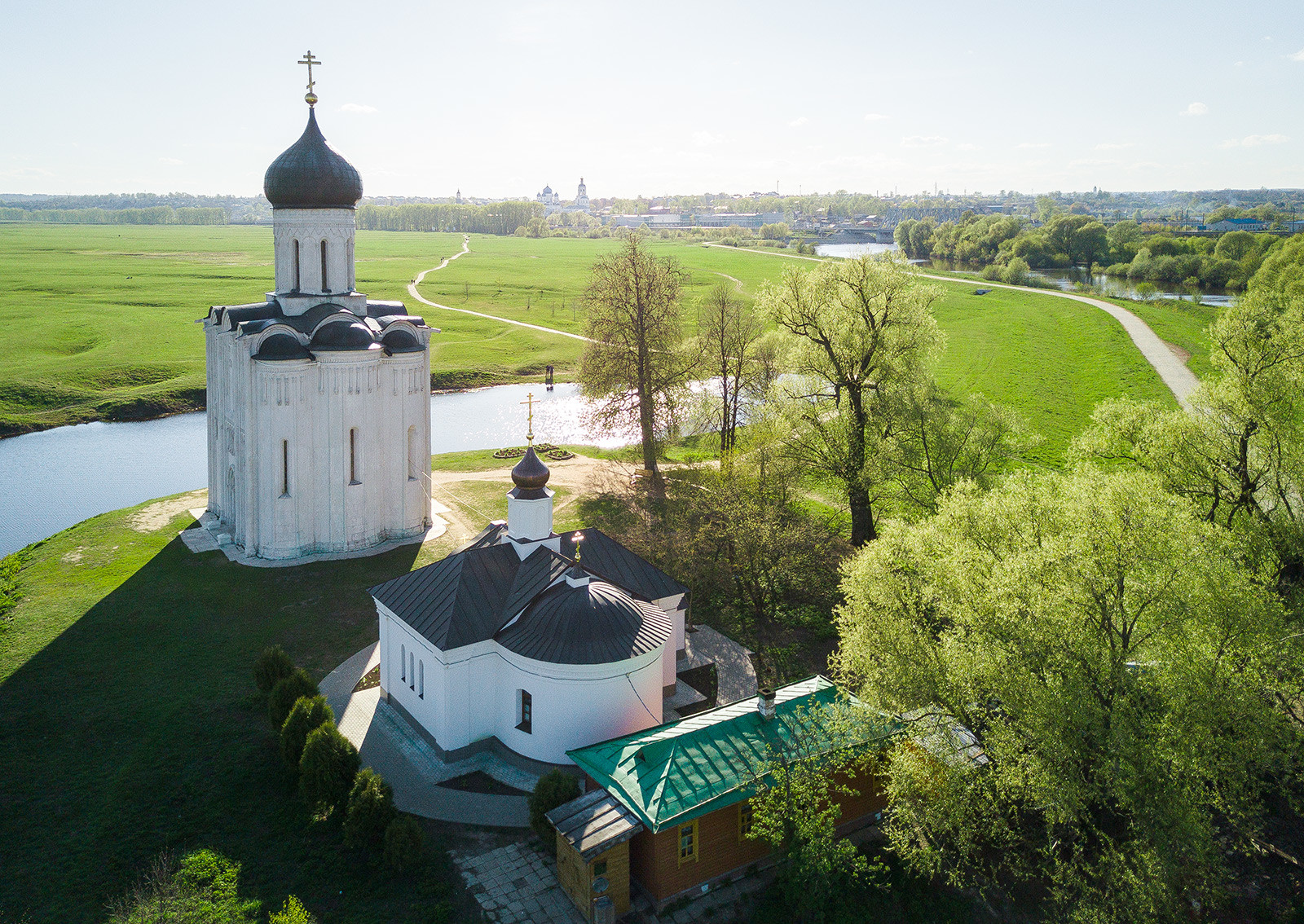 Yet another church from the time of Andrey Bogolyubsky, this is arguably the most famous symbol of his power and the prosperity of his Vladimir-Suzdal Principality. According to artist and art restorer Igor Grabar, the Church of the Intercession on the Nerl River is the closest to church ever built in Russia.

The white stone building stands not far from the confluence of the Nerl and Klyazma rivers and, owing to the proximity of water, the meadow around the church is often flooded while the church stands picturesquely on its hill, surrounded by water.

4. The Church of Prince Dmitry on the Blood, Uglich 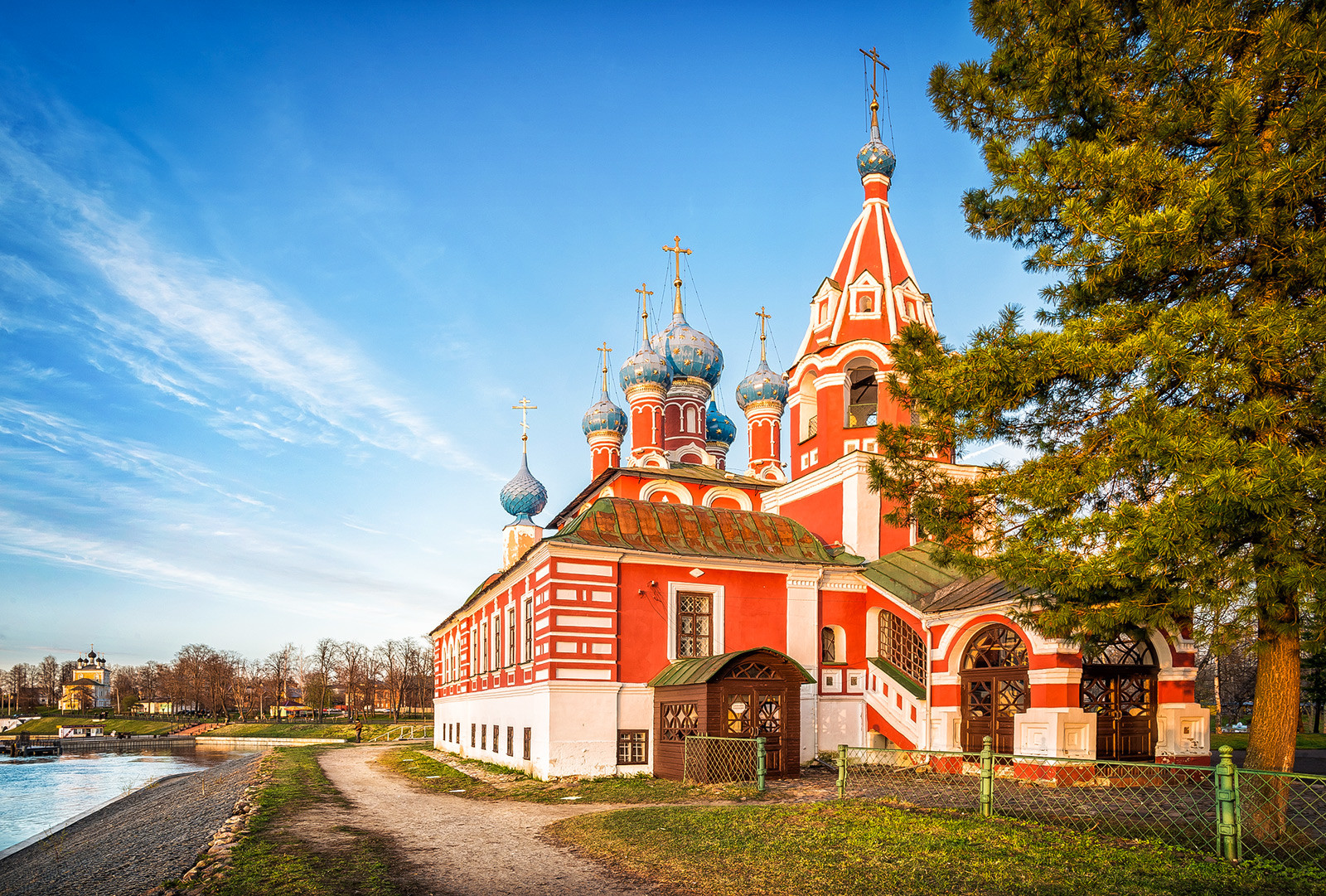 There are many legends surrounding the death of Prince Dmitry, Ivan the Terrible’s son. The most popular is that he was stabbed to death on orders from Boris Godunov for Dmitry was the Tsar’s only heir (not counting another mentally-handicapped son named Fyodor).

A church, made first of wood and later (1692) of stone, was built on the site of his death on the banks of the Volga River, within the Uglich Kremlin.

Incredible 18th-century frescoes depicting Dmitry and the murder scene have survived inside.

5. The Church of the Resurrection of Christ, Foros 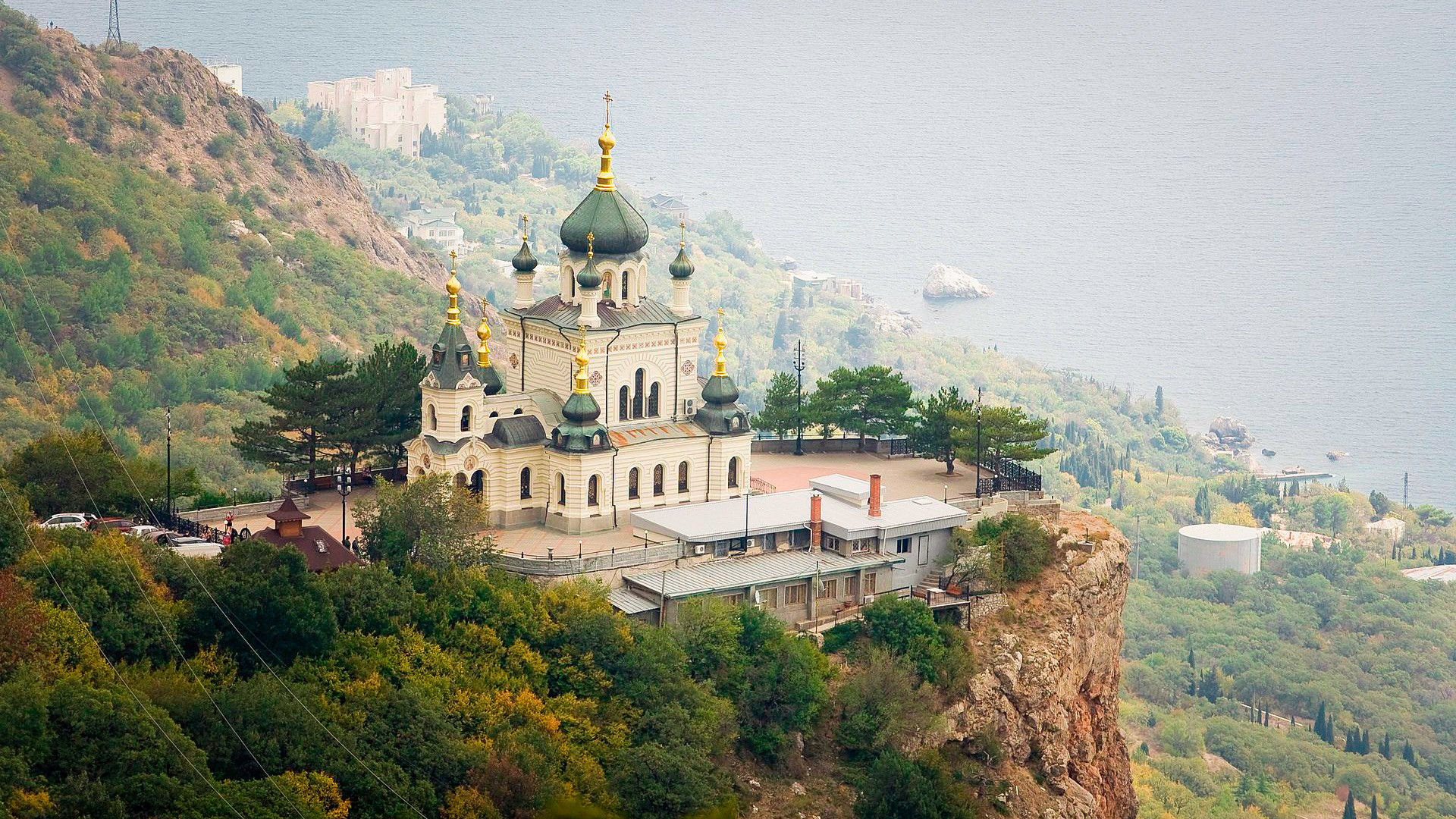 This amazing church rises over the cliffs overlooking the coast of Foros on the southernmost part of the Crimean Peninsula. It was built in 1892 and commemorates the Russian Imperial Family's miraculous survival in a train crash while en route to Crimea. After the accident, Tsar Alexander III supported the carriage roof on his shoulders until help arrived.

After the revolution of 1917, the church was closed and plundered. During World War II, a Red Army detachment was stationed here and the church was damaged during a Nazi air raid. Then, during the Soviet period, there were several attempts to demolish it in  to build first a sanatorium and, later, state dachas. But despite all this, the church miraculously survived. After the perestroika (Gorbachev's liberalizing reforms in the 1980s), it reopened to worshippers.

6. Church of the Sign of Our Lady in Dubrovitsy, Moscow Region 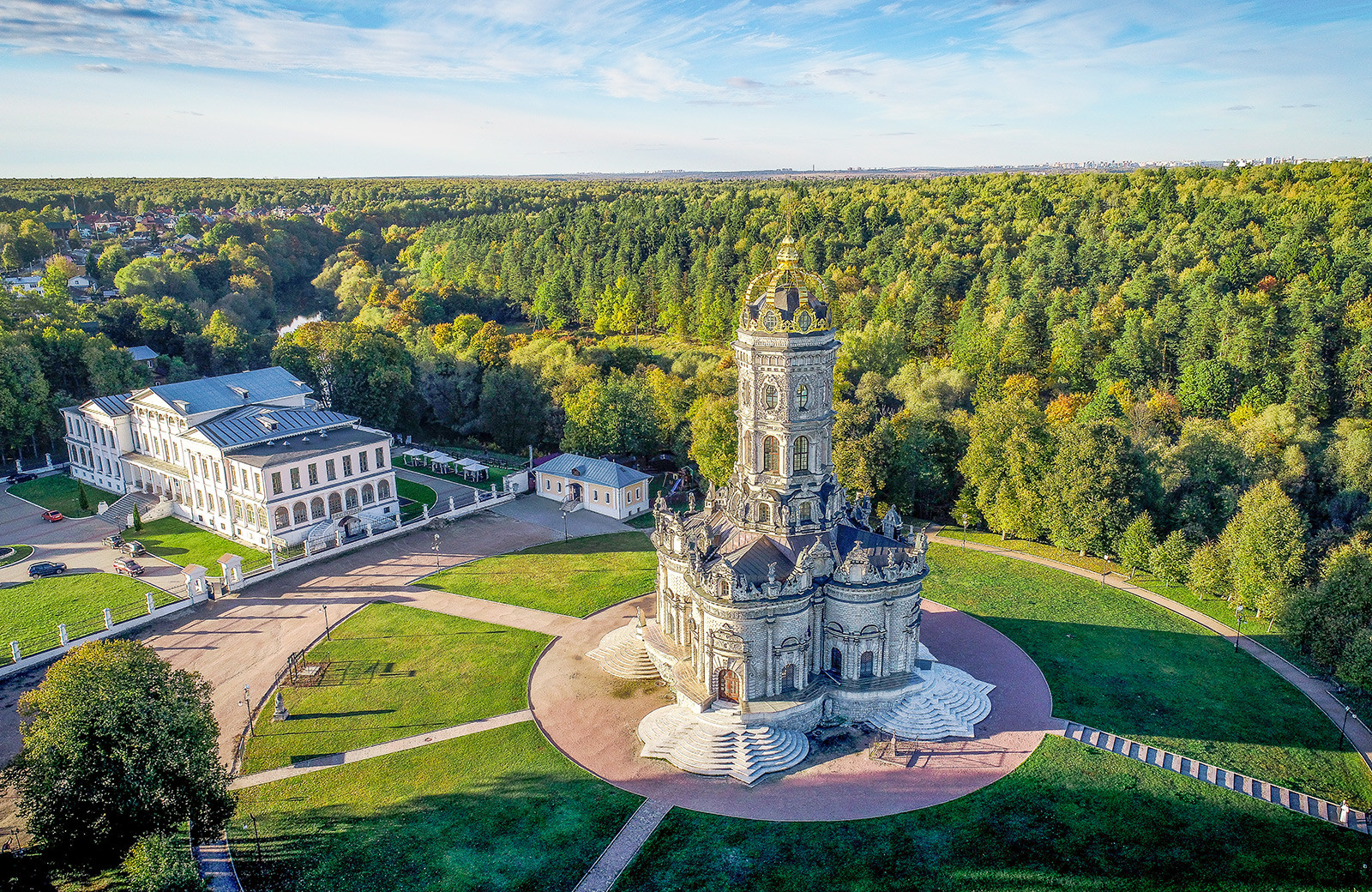 One of the most unusual Russian churches, it was once part of the Dubrovitsy Estate, which belonged to noble Moscow families. Nowadays, there is a restaurant and a registry office in the manor house, and the site is teeming with newlyweds posing for photographs against the backdrop of this beautiful church.

It was built at the end of the 17th century by unknown Italian architects who were invited by Prince Golitsyn, Peter the Great's tutor and owner of the estate at the time. In the Soviet period, the bell tower was blown up. Meanwhile, the church was first turned into a museum and then later shut down. 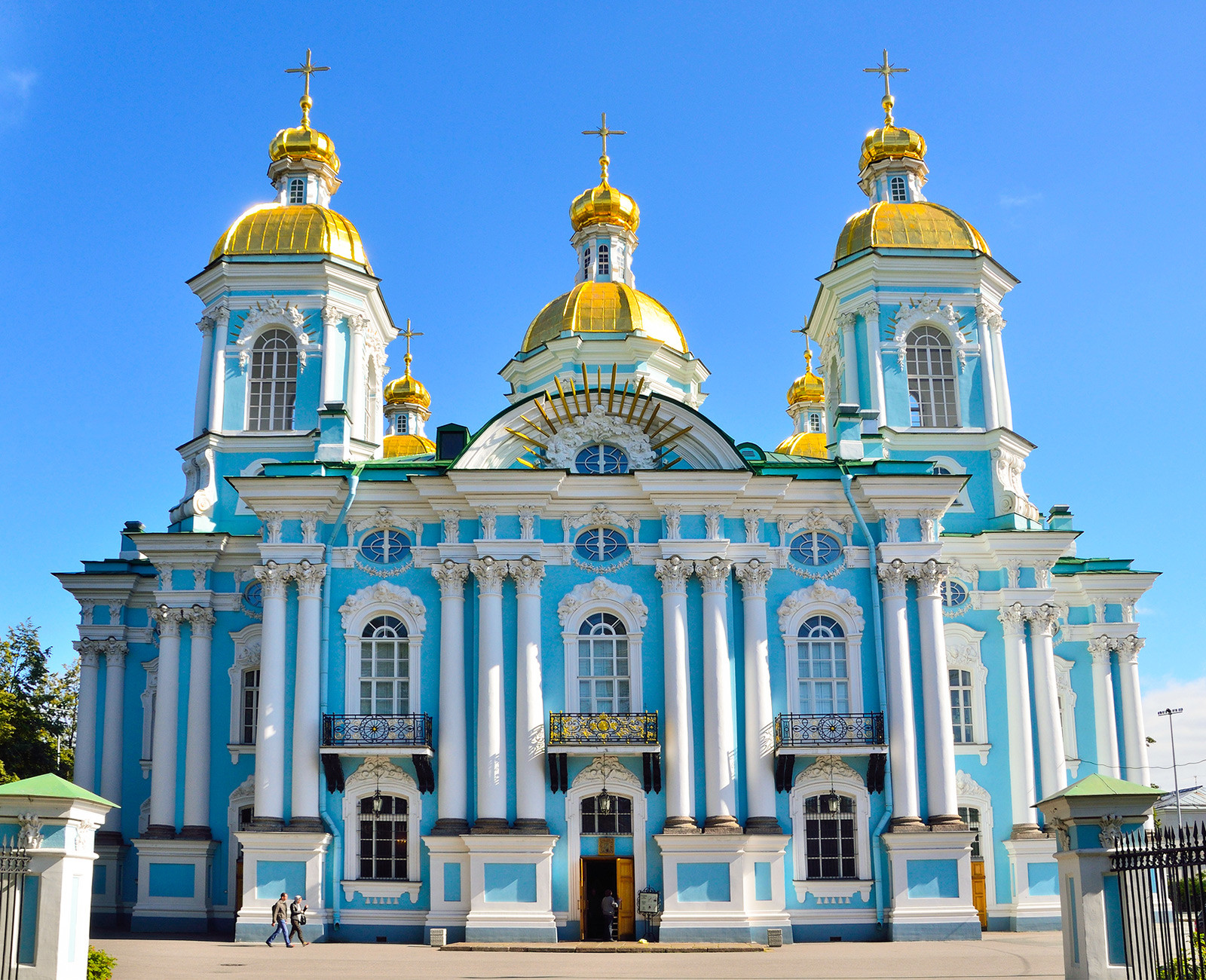 dazzling sky-blue cathedral in the Elizabethan Baroque style, this was the first cathedral built in Russia for military sailors. It was built in the mid-18th century as a regimental church for the naval branch of the Imperial Guard, the Naval Guards, who lived nearby in barracks.

The church remained open during the Soviet period, and services were held here even during the hard years of starvation during the Siege of Leningrad. The burial service for renowned poet Anna Akhmatova was held here. Memorial services for navy men and submariners who have lost their lives are still carried out here. 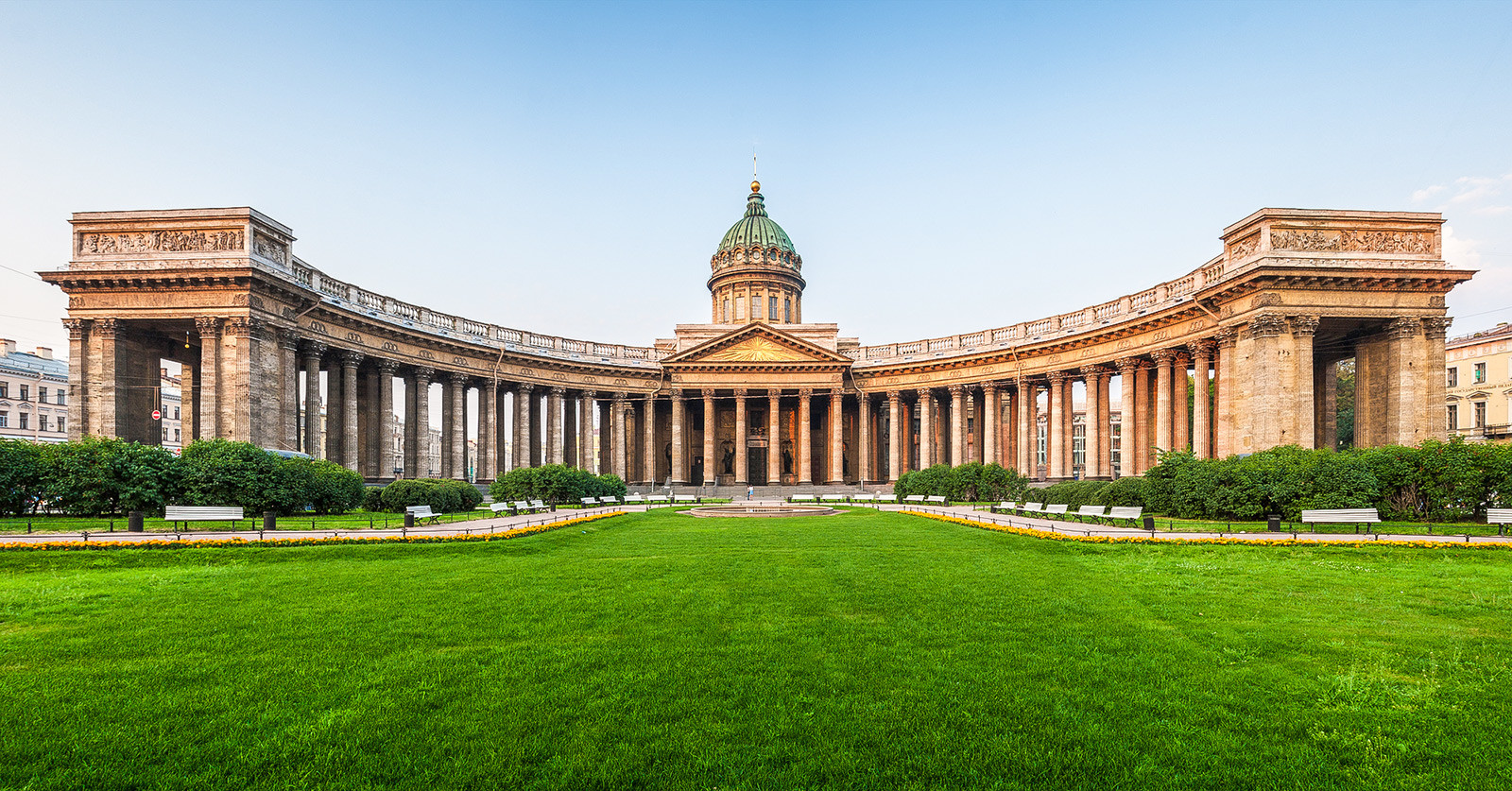 cathedral was built in 1811 on orders from Emperor Paul I, who wanted the structure to resemble St. Peter's Basilica in Rome and chose the architectural design himself. It is the city's main cathedral and served as the Imperial Family’s ceremonial church. Its 96 columns form a broad colonnade facing Nevsky Prospect. The building is clad with natural stone, including Travertine, Karelian marble, porphyry .

The best painters and sculptors of the time worked on its decoration, including Karl Bryullov and Vladimir Borovikovsky. Military trophies from the victory over Napoleonic France are kept here, and Field Marshal Kutuzov, the main hero of that war, is buried here.

In Soviet times, the cathedral housed the Museum of the History of Religion and Atheism, while the relics of saints were hidden in the attic. The unique silver iconostasis was lost — melted down, as it turned out. Church services resumed here in the 1990s. 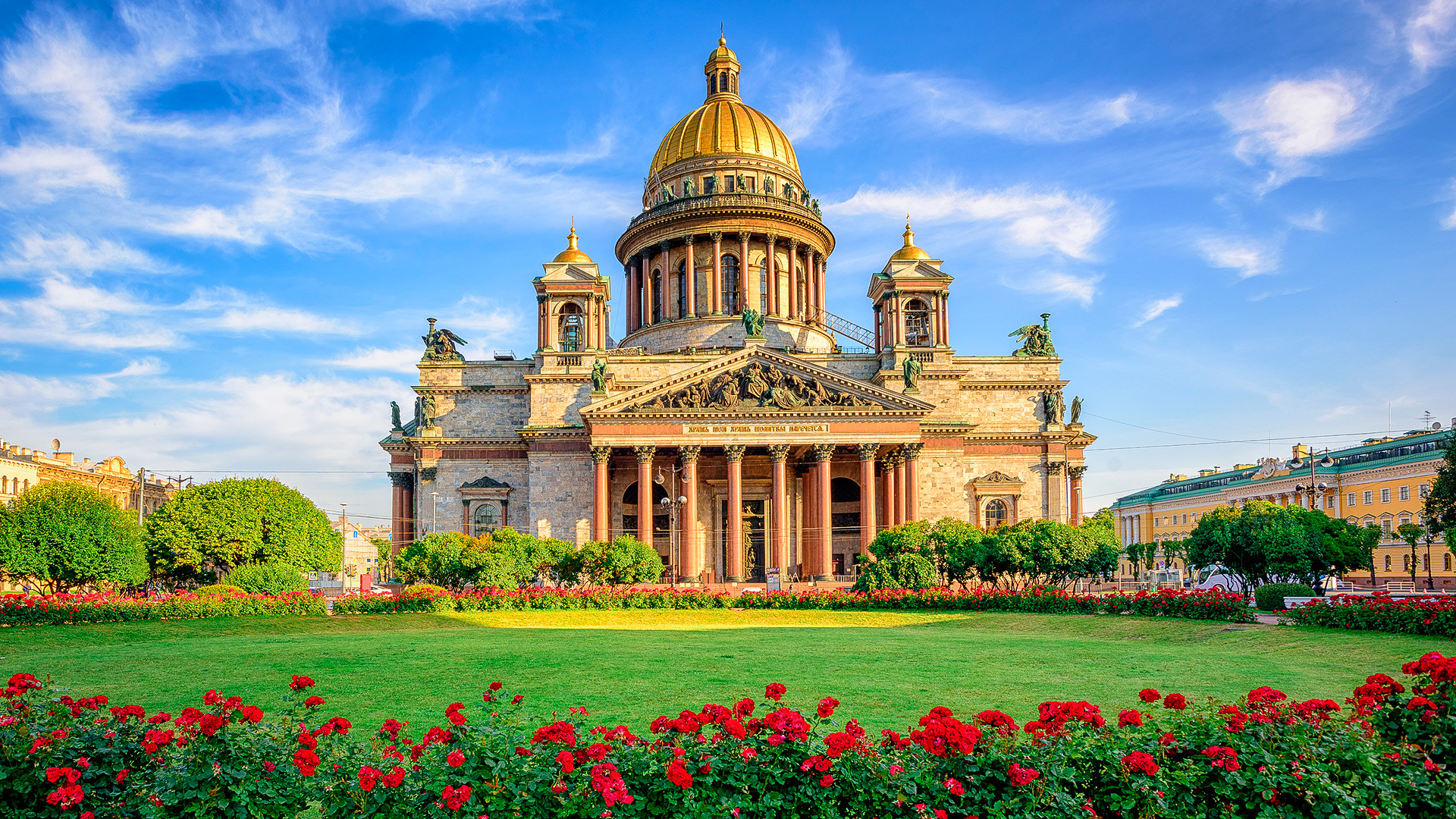 During the Siege of Leningrad, valuable exhibits from other museums were moved to the cathedral. Locals knew that the Germans used the tall building as a landmark and therefore wouldn’t bomb it.

The colonnade of St. Isaac's Cathedral is one of the highest viewing platforms in the city and one of its most popular tourist attractions. 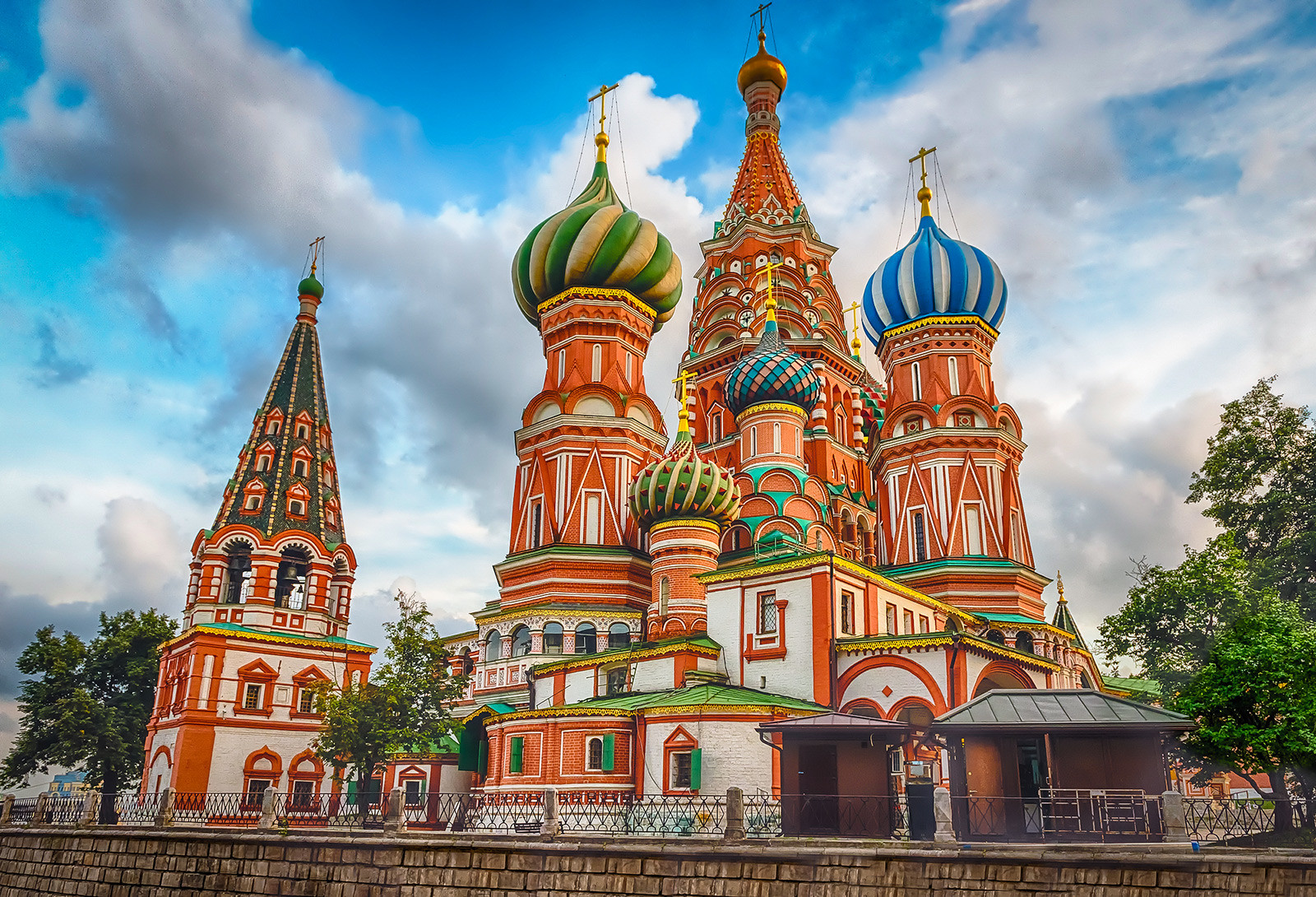 cathedral was built between 1555 and 1561 on the orders of Ivan the Terrible to commemorate the victory over the Khanate of Kazan. Its formal name is the Cathedral of the Intercession of the Most Holy Theotokos on the Moat. The cathedral contains as many as nine churches, just one of which is dedicated to Basil the Blessed, a Moscow holy fool. According to the legend, Ivan the Terrible ordered that the architects who had built this beautiful church be blinded so that they could never repeat or surpass its design.

In 1812, as French forces were withdrawing from Moscow they wanted to blow up the cathedral but did not enough time to go ahead with the plan. In the late 1920s, the Bolsheviks decided to demolish it, but architect and restorer Pyotr Baranovsky came to its defense, even sending a telegram to Joseph Stalin. As a result, the cathedral was left alone, but its champion was arrested and sent to the Gulag for "anti-Soviet activities." During the Soviet period, the building housed a historical and architectural museum. In the 1990s church services resumed, and the church was included on the UNESCO World Heritage site list. And, of course, it has become one of Russia's main landmarks.

VIDEO: This is one of the oldest and beautiful churches in Russia