Maloyaroslavets: The monastery that survived Napoleon’s last charge in the east 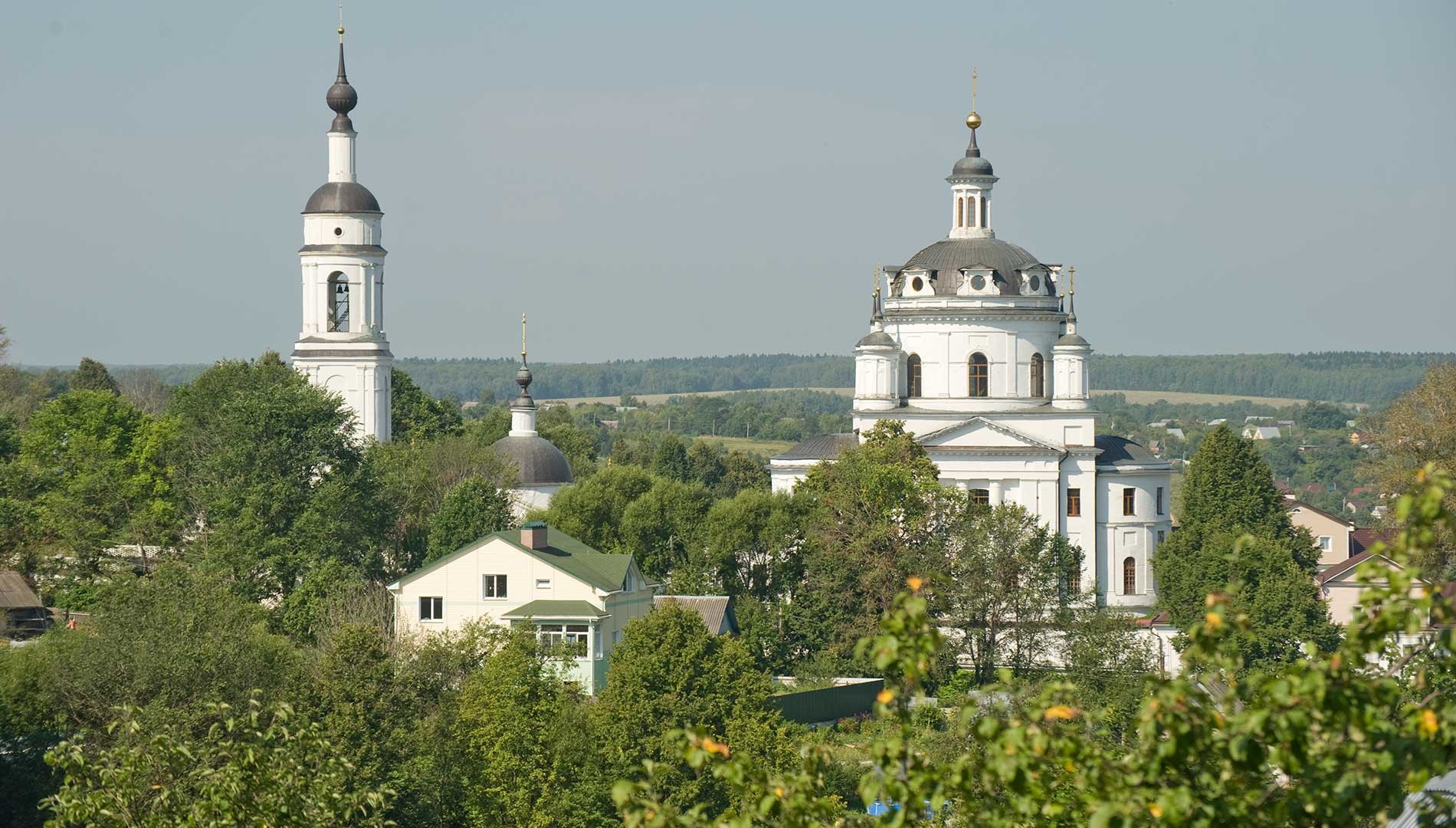 Maloyaroslavets is a small town located about 75 miles southwest of Moscow. Its most important spiritual institution, the St. Nicholas-Chernoostrovsky Monastery, has struggled throughout its history. Nonetheless, this town and monastery (recently revived as a convent) proved critical to the defeat of Napoleon and his Grand Armee. 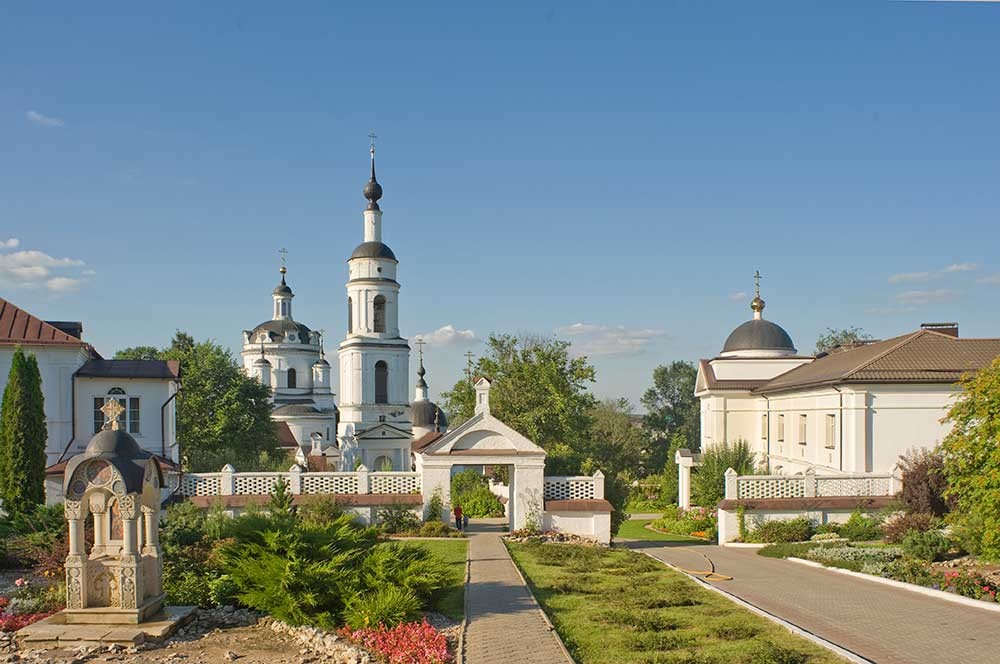 It was this history that Russian photographer and chemist Sergei Prokudin-Gorsky hoped to capture when he visited Maloyaroslavets in summer 1912 as part of a bigger project to document sites connected with the centennial of the Napoleonic invasion of Russia using his unique color photographic process (see box text below). 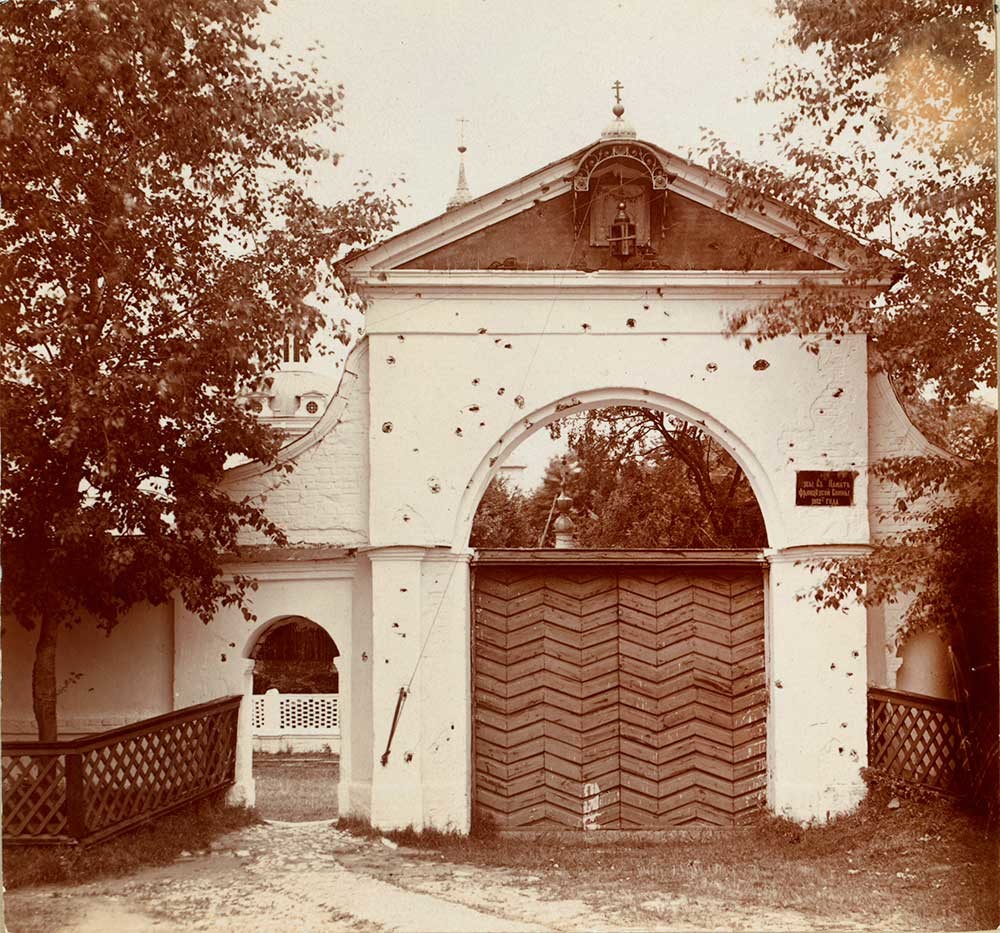 The town was the site of a decisive moment in the catastrophic retreat of Napoleon’s Grand Armee from Moscow. On Oct. 24, 1812, Russian forces mounted a furious defense of Maloyaroslavets, compelling Napoleon’s forces to retreat not southward to warmer territory, but back along an icebound road to ruin. Prokudin-Gorsky was especially interested in the St. Nicholas-Chernoostrovsky Monastery, which lay in the center of the battle. 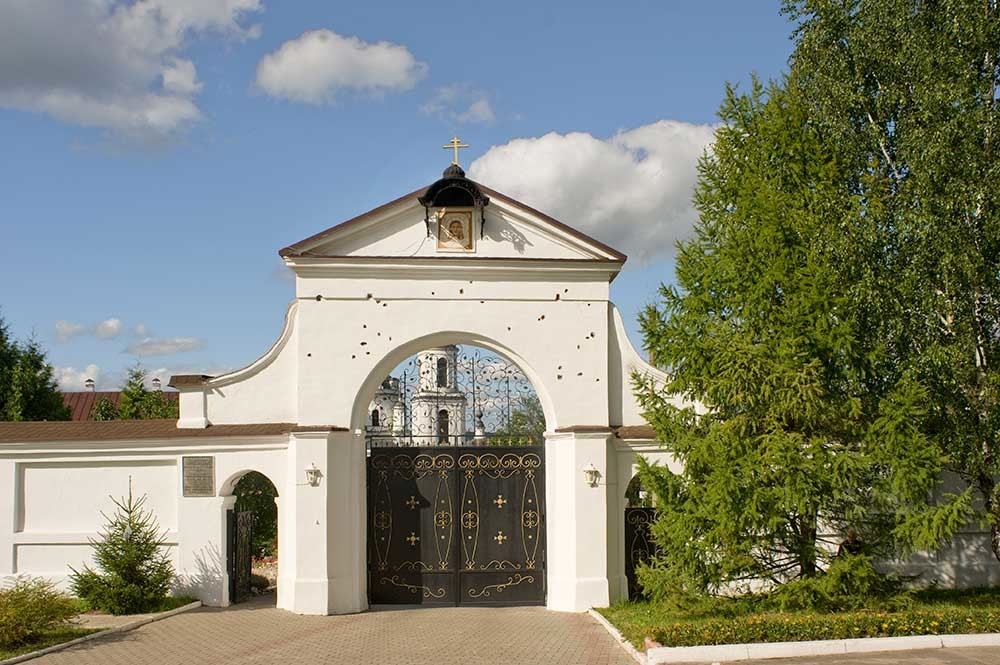 Prokudin-Gorsky’s original glass negatives from this visit were not found in the part of his collection sold to the Library of Congress, but several small monochrome prints made for his contact albums have survived and provided valuable information. My photographs of the town and monastery were taken in late 2015, just over two centuries after the invasion.

Maloyaroslavets (current population 28,000) sits on the bank of the Luzha River, a right tributary of the Protva, which in turn flows into the Oka, part of the Volga basin. The town still has the remains of a flattened hillock that served as a citadel for a tribe of Vyatichi, local Slavs who were subdued by Kiev’s Prince Svyatoslav in the second half of the 10th century.

The present town, however, was settled at the end of the 14th century by Prince Vladimir the Brave of Serpukhov (1353-1410), who named it after his fourth son, Yaroslav. The first written reference to “Yaroslavets” occurred under the year 1402, which is considered the town’s founding date. In 1485, it was absorbed into the rapidly expanding Moscow Principality and was designated “Maloyaroslavets” (“Little Yaroslavets), perhaps to distinguish it from the much larger town of Yaroslavl.

During the following centuries, Maloyaroslavets developed into a modest local center. In 1776, during Catherine the Great’s administrative reforms of Russia’s provinces, the town was placed within the province of Kaluga.

The town’s oldest surviving shrine, the Cathedral of the Kazan Icon of the Virgin, was built in the early 18th century and has recently been restored. Its dome and bell tower are visible in a general view taken by Prokudin-Gorsky.

There is no clear evidence as to the founding date of the town’s major spiritual institution, the St. Nicholas-Chernoostrovsky Monastery, located on a height known as “Black Fort” not far from the ancient citadel. The earliest written reference occurred only in 1621, but evidence suggests that at least a church dedicated to St. Nicholas was erected on the site by the turn of the 15th century by the local Obolensky princely clan. 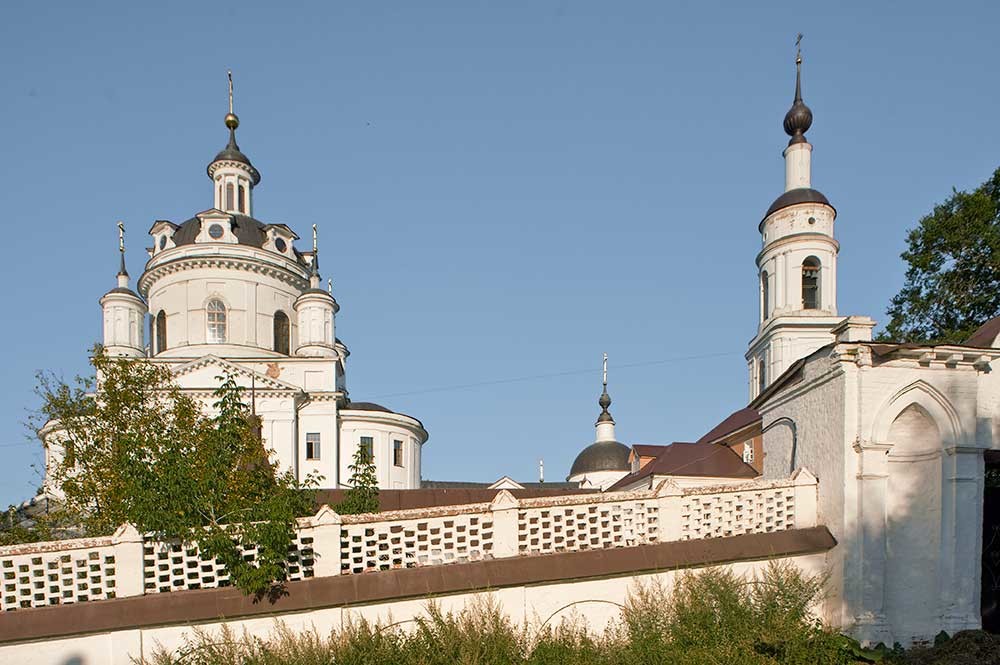 The monastery’s first historian, the prominent cleric Archimandrite Leonid (Kavelin), wrote in 1863 that it likely arose at the turn of the 16th century after the absorption of Maloyaroslavets into the Muscovite principality. In 1610, the monastery was devastated by Polish-Lithuanian forces during the national dynastic and social crisis known as the Time of Troubles. Evidence indicates that the monastery and its main church revived only in the mid-17th century.

The St. Nicholas Monastery remained on precarious footing over the following century. As part of Catherine the Great’s reorganization of monastic administration, the monastery was dissolved in 1775 for lack of adequate financial means.

Despite this setback, local sentiment favored a restoration, and major financial support appeared from the Moscow merchant Terenty Tselebeev. With the creation of the Kaluga Diocese in 1800, its revival was entrusted to monks from nearby Optina Pustyn, one of 19th century Russia’s major spiritual centers.

In 1809, an able administrator was found in the person of Father Makarius, who directed the rebuilding of the monastery. The progress made by Makarius was interrupted by the momentous events of late October 1812, which shattered the placid existence of Maloyaroslavets.

In the heat of battle

Isolated in half-ruined Moscow and with no prospects of Russia’s suing for peace, Napoleon and his reduced army (about 110,000 troops) began their exodus on Oct. 19. Because of lack of horse fodder, the Grand Armee faced catastrophic limitations in cavalry, artillery and transport. The intention was to replenish depleted supplies by marching southwest in the direction of Kaluga toward relatively unscathed territory. 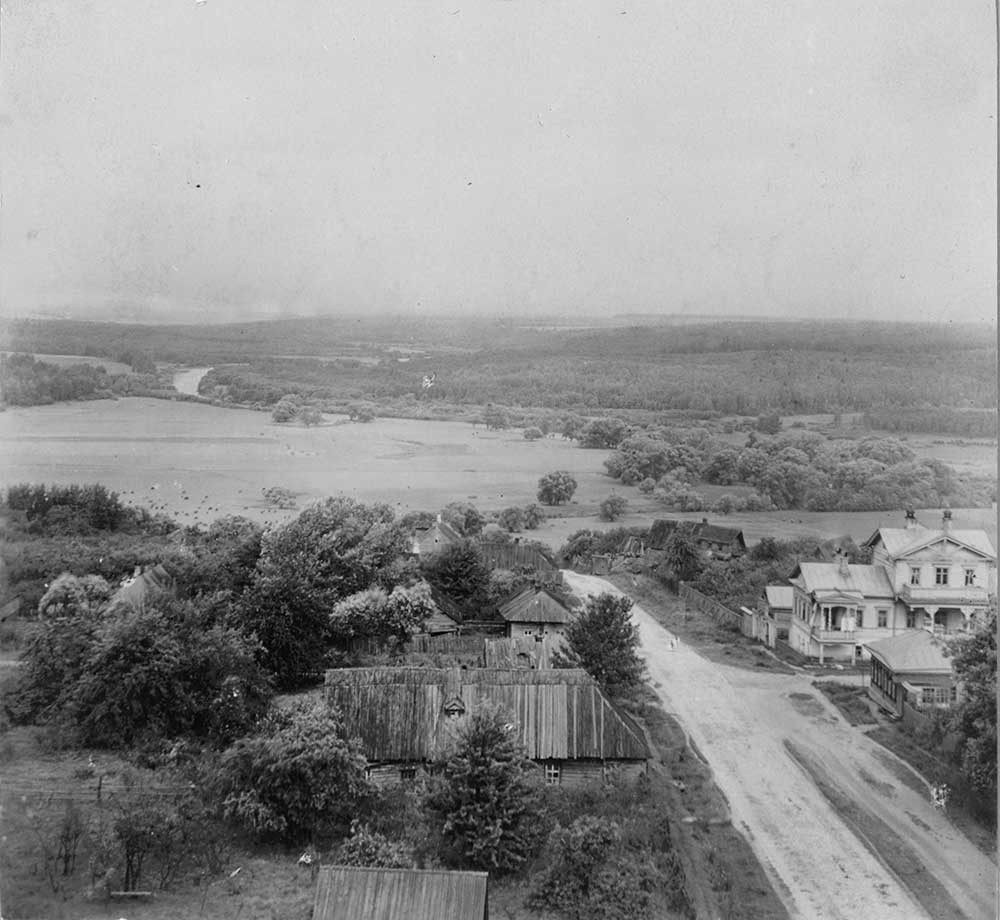 However, the path southwest from Moscow was threatened by the Russian army, preserved as a coherent fighting force by Field Marshal Mikhail Kutuzov after the cataclysmic Battle of Borodino on Sept. 7. By establishing his main camp at Tarutino on the Old Kaluga Road, Kutuzov had artfully covered the main southern routes available to Napoleon.

On Oct. 18, Russian forces defeated a probing operation by Marshal Joachim Murat near Tarutino, a sign that Kutuzov’s army was full of fight. Switching to the New Kaluga Road, Napoleon’s army reached Borovsk by Oct. 22 and began to move toward Maloyaroslavets on the way to Kaluga.

On Oct. 23, both sides were confused as to the precise locations of the main body of the opponents’ forces. Alarmed by Russian cavalry raids, Napoleon sent his 13th Division, commanded by Alexis Joseph Delzons, ahead to Maloyaroslavets early on the 24th. Kutuzov ordered General Dmitry Dokhturov, commander of the 6th Corps, to counter this move, and as the day unfolded, both sides fed more forces into the firestorm of battle. 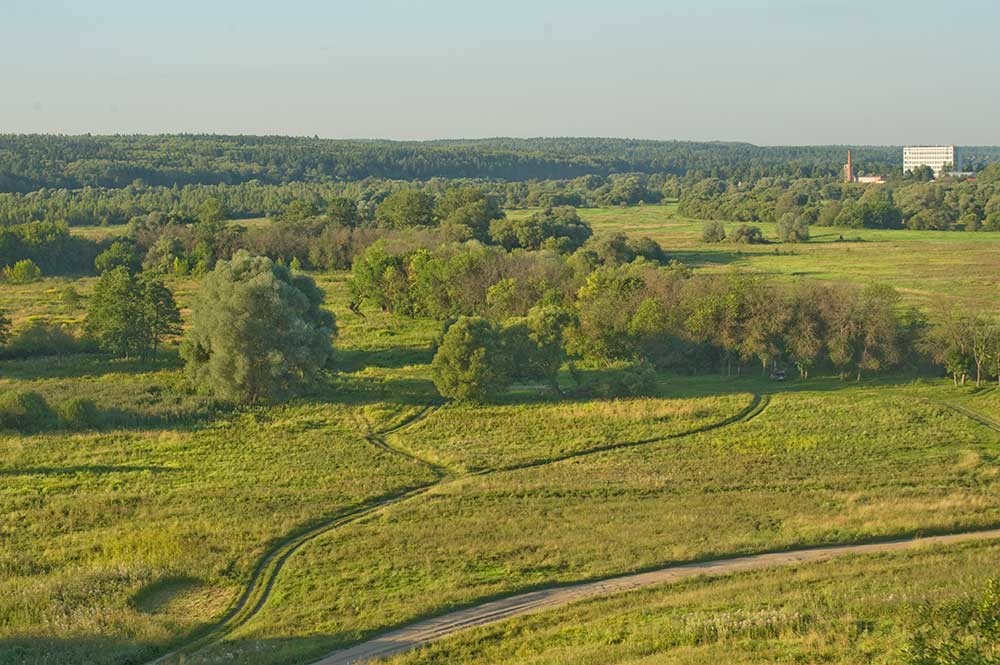 Several times, the French crossed the Luzha River at St. John’s Meadow (Ivanovsky Lug) and stormed the heights near the Church of St. John the Baptist and the St. Nicholas Monastery. As part of his documentation of battlefield sites, Prokudin-Gorsky photographed the meadow along the Luzha River. My photographs show a remarkable preservation of this historic landscape.

The town itself, which had about 1,500 inhabitants, changed hands eight times during a day of savage combat. The few streets were consumed by flames, and many of the wounded died in burning ruins. Russian losses totaled around 7,000, and the French suffered perhaps as many as 6,000, including General Delzons. 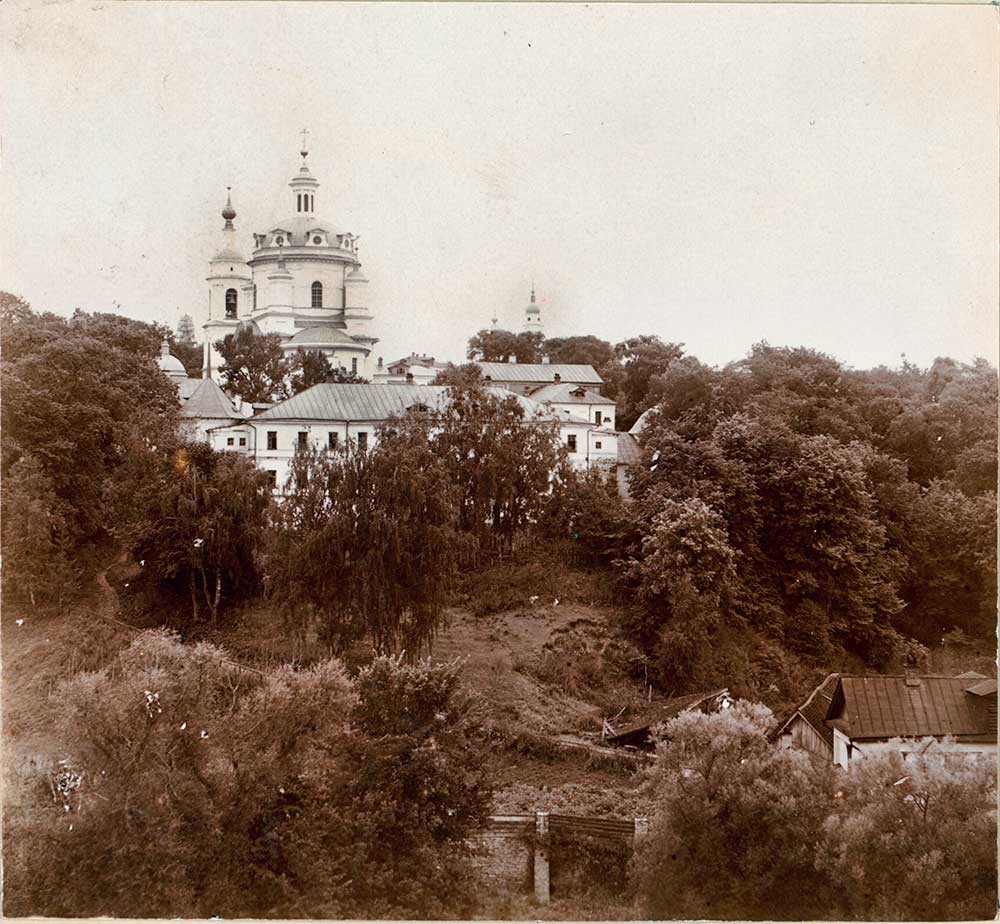 Located at the top of a bluff overlooking the St.John’s Meadow, the monastery became a focal point of

the struggle. One dramatic moment was recreated in a diorama painted by Efim Deshalyt in 1987 that shows General Mikhail Borozdin’s troops from the 8th Infantry Corps replacing Dokhturov’s depleted forces, which had held against repeated French attacks for several hours around the monastery. The diorama is now displayed in a former chapel built in 1860, one of the town’s three museums dedicated to the events of 1812.

As the day waned, Kutuzov abandoned the struggle for Maloyaroslavets and shifted his forces to prepared positions southward, thus blocking the road to Kaluga. Left in possession of a small, ruined town and lacking horses for cavalry and artillery, Napoleon made the fateful decision to turn northwest toward the already destroyed road to Smolensk. Maloyaroslavets proved the culminating clash in a week that propelled Napoleon’s Grand Armee toward its agony.

Rebirth as a memorial

After the battle, the burned monastery was a scene of devastation, enveloped by the stench of thousands of decaying bodies and mounds of horse flesh. Within a few days, Makarius and a single novice returned to the ruins to assist with the process of mass burial. Miraculously, the Savior icon over the main monastery gate was unscathed. 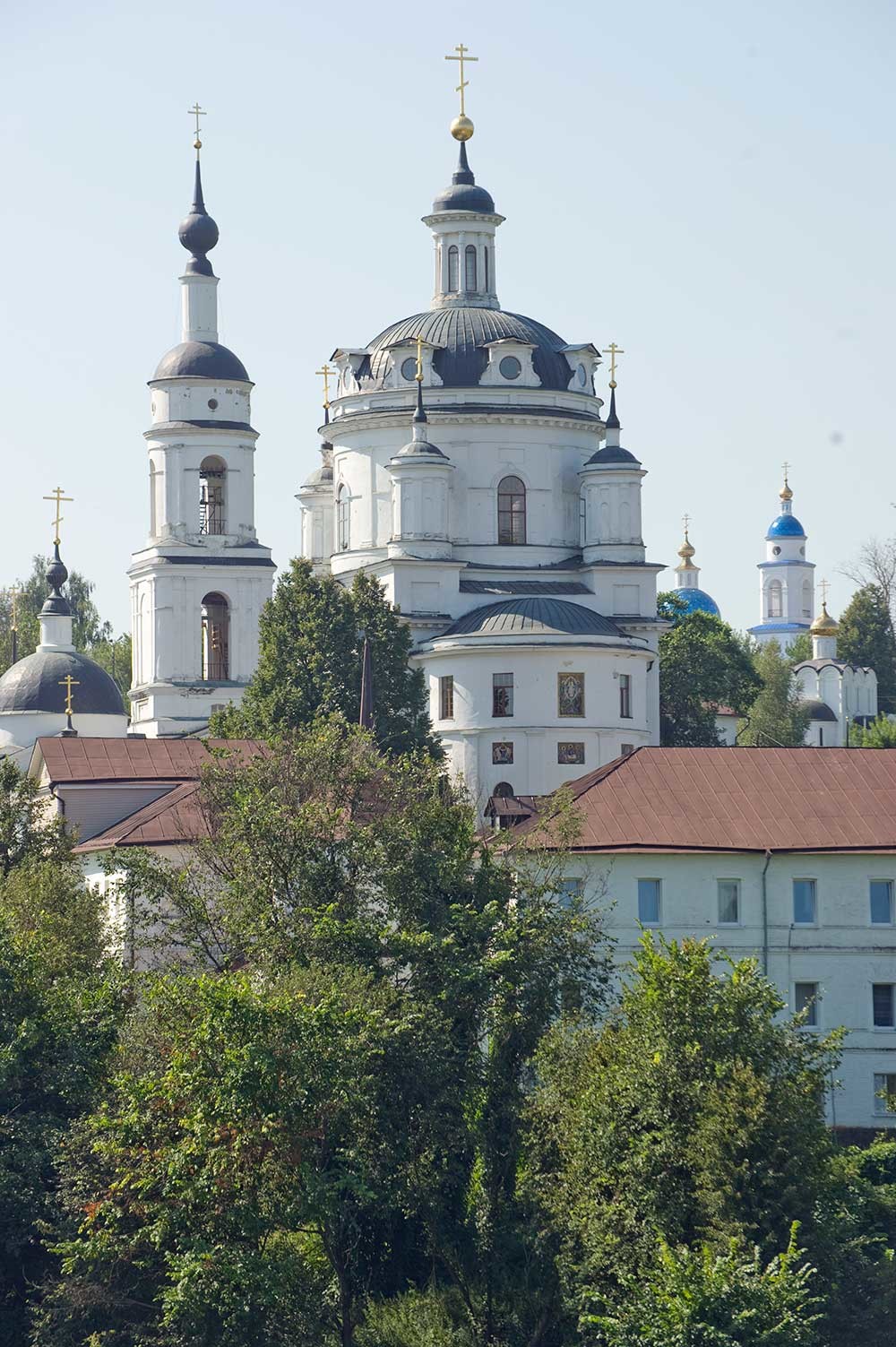 Father Makarius resumed his energetic efforts to rebuild the monastery, now with a new urgency conveyed by its role as a national battle shrine. In 1813, the Holy Synod donated 3,000 rubles to the effort, and the following year, the merchant Tselibeev, on his deathbed, left the monastery his entire fortune of almost 71,000 rubles (an enormous sum). That same year, Emperor Alexander I also offered 10,000 rubles from the Treasury. 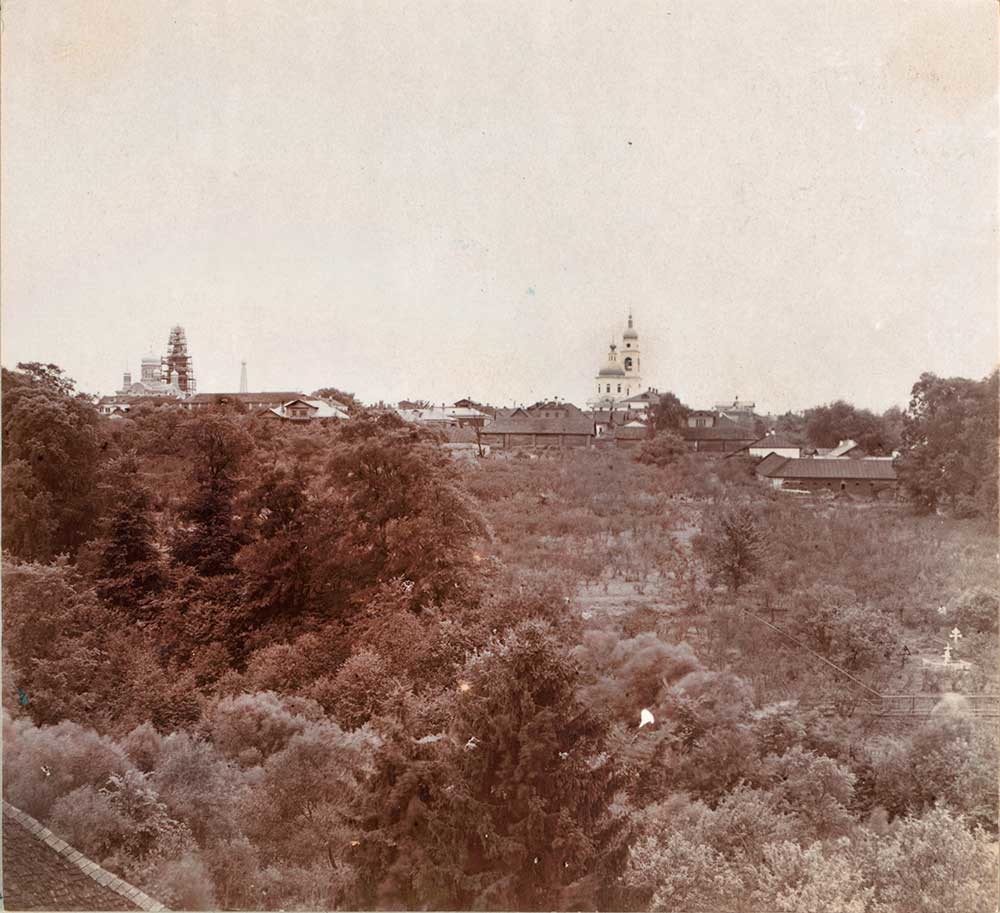 By 1817, the St. Nicholas monastery was formally reconstituted with its status as a battle memorial. The sharply uneven terrain posed construction difficulties, however, and the imposing neoclassical Cathedral of St. Nicholas was consecrated only in 1843, four years after the death of Father Makarius, Prokudin-Gorsky photographed the cathedral and bell tower across a deep ravine to the southeast of the monastery. My photographs show the view almost unchanged. 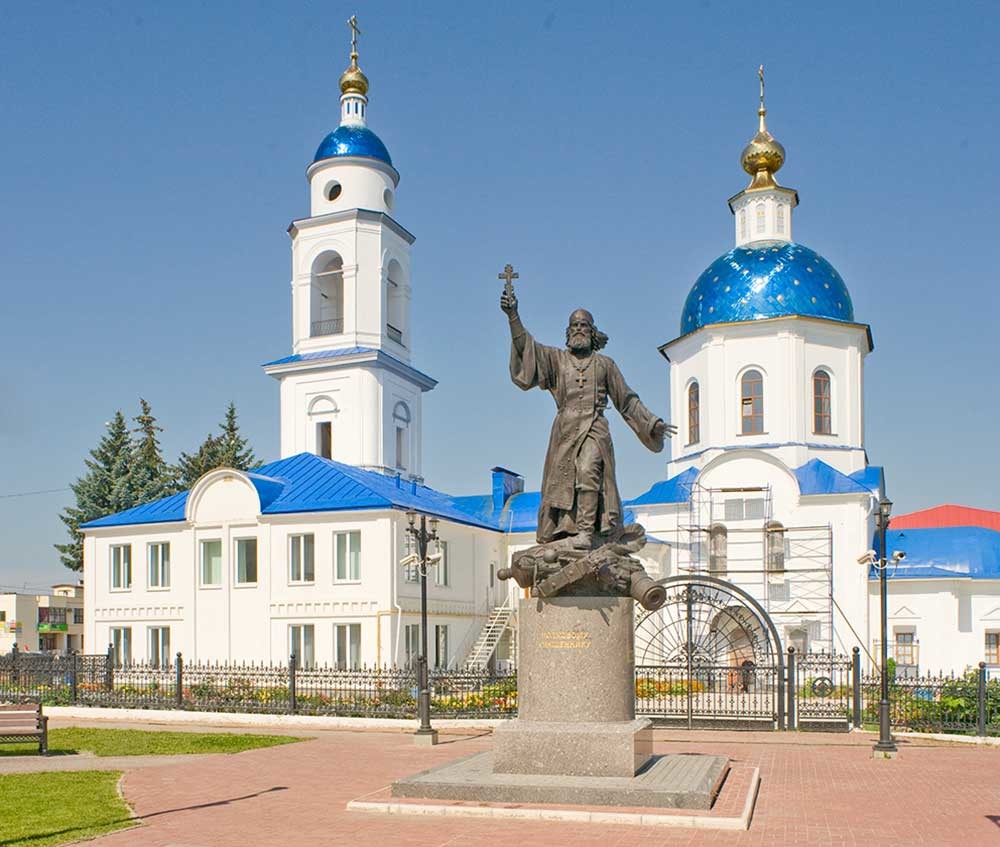 The main monastery gate was left untouched as a memorial pockmarked with traces of shrapnel. Prokudin-Gorsky’s photograph shows the gate crowned with a Savior icon. My views reveal little change apart from the repainted icon.

Following the Bolshevik Revolution in late 1917, the monastery was nationalized and it ceased to exist by the mid 1920s. A 1925 proposal to raze the structures for their brick was rejected, but monastic property was confiscated or vandalized. The buildings served various pedagogical, museum and housing purposes.

During World War II, Maloyaroslavets endured German occupation from Oct. 18,  1941 until its liberation on Jan. 2, 1942 after Red Army successes in the Battle of Moscow. Fortunately, further damage to the monastery was limited. 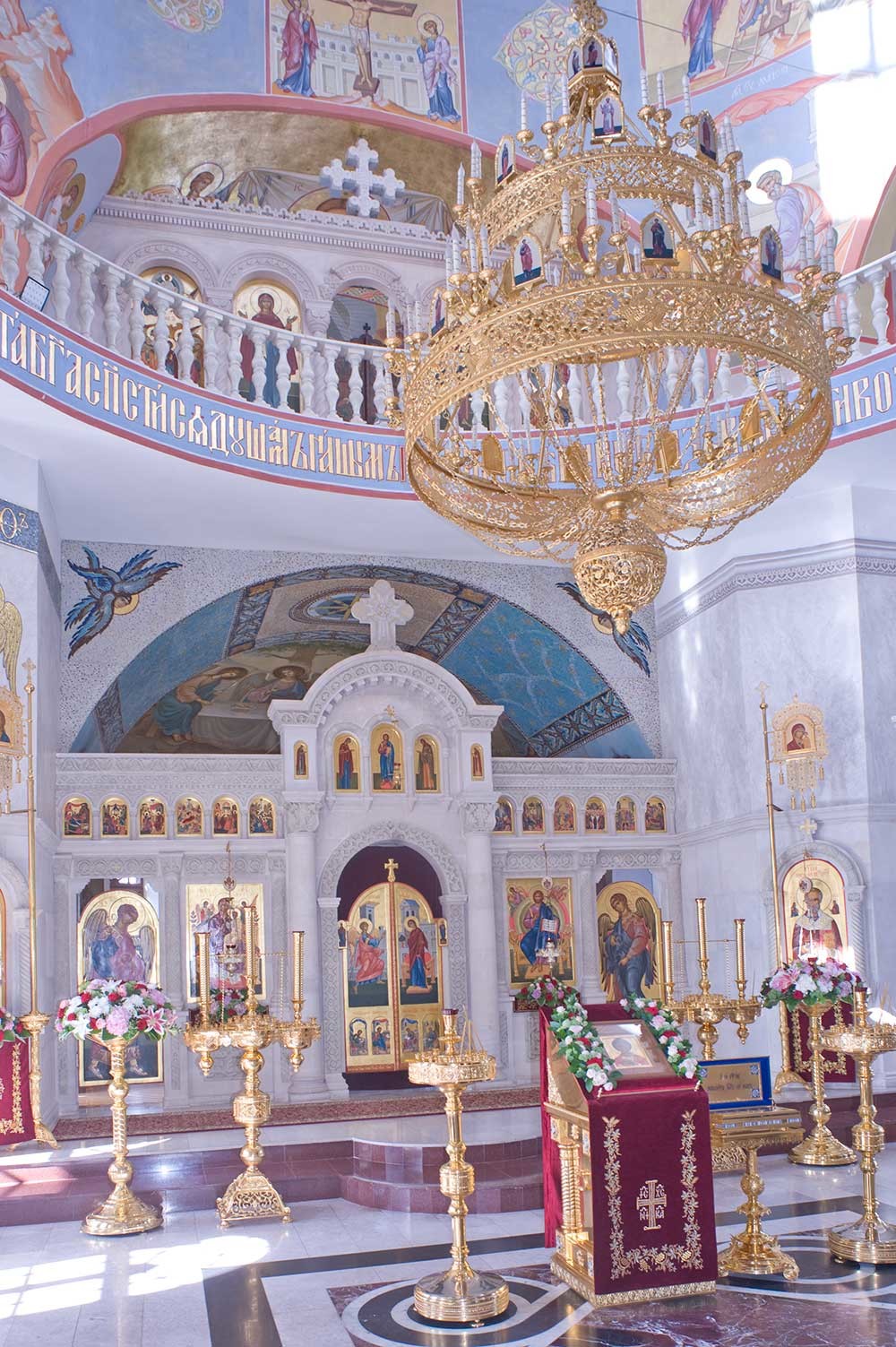 The monastery was returned to the Kaluga Diocese in 1991, and in 1993, it was reactivated as a convent that includes a home for young girls. Over the following 15 years the monastery buildings were restored, including the St. Nicholas Cathedral with its lofty new icon screen.

American historian and architecture expert William Brumfield has visited many of Russia’s most interesting sites, following in the footsteps of Sergei Prokudin-Gorsky, a Russian chemist and photographer who created a unique process for making color photographs in the early 1900s.  Between 1903 and 1916, Prokudin-Gorsky traveled through the Russian Empire and took over 2,000 photographs with the process, which involved three exposures on a glass plate. In August 1918, he left Russia and ultimately resettled in France with a large part of his collection of glass negatives. After his death in Paris in 1944, his heirs sold the collection to the Library of Congress. In the early 21st century the Library digitized the Prokudin-Gorsky Collection and made it freely available to the global public. A number of Russian websites now have versions of the collection. In 1986, William Brumfield organized the first exhibit of Prokudin-Gorsky photographs at the Library of Congress. Over a period of work in Russia beginning in 1970, Brumfield has photographed most of the sites visited by Prokudin-Gorsky. This series of articles juxtaposes Prokudin-Gorsky’s views of architectural monuments with photographs taken by Brumfield decades later.