Where Russian writers loved to spend their holidays

Legion Media
Writers loved to spend time in their country estates but many also chose to travel, to the south of Russia and even abroad.

The dry Crimean climate, the abundance of conifers and, of course, the sea air is a combination that many find most agreeable. Even before the Bolsheviks turned Crimea into a health resort for the whole of the Soviet Union, many writers came here to improve their health and to rest. That is why traces of their presence can be found in virtually every town. 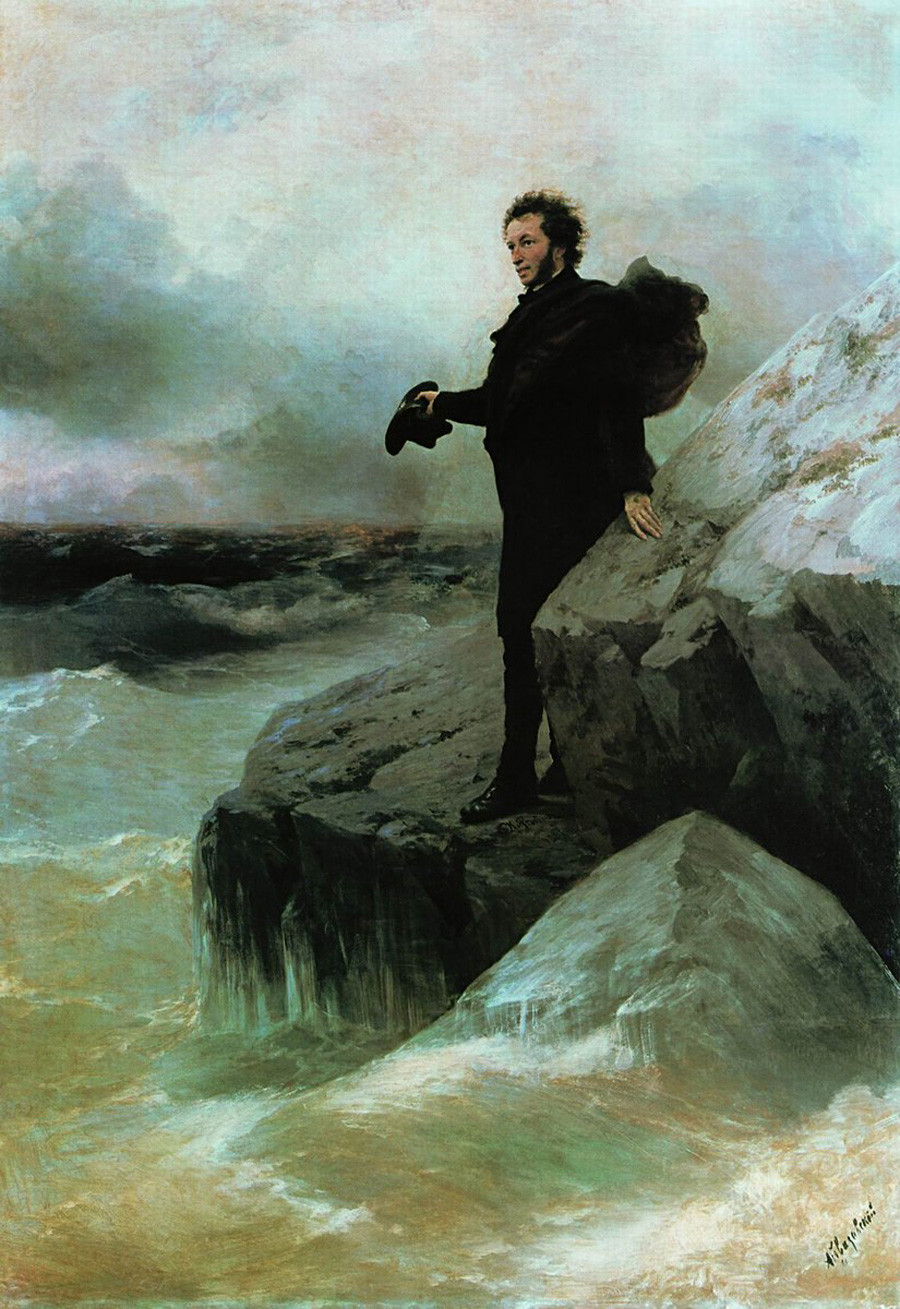 'Pushkin's Farewell to the sea' by Ivan Aivazovsky and Ilya Repin.

Bakhchysarai was made famous by Alexander Pushkin, who traveled to Crimea and received treatment here during his southern exile.

Anton Chekhov spent his final years at his "white dacha" in Yalta: he suffered from tuberculosis and Moscow climate did not agree with him.

Leo Tolstoy adored Crimea. He first got to know the place when he fought in the Crimean War (and wrote his famous Sevastopol Sketches), and he later came here to travel. In 1901-1902, he spent whole nine months here with his family. Incidentally, here he met Chekhov and Gorky. 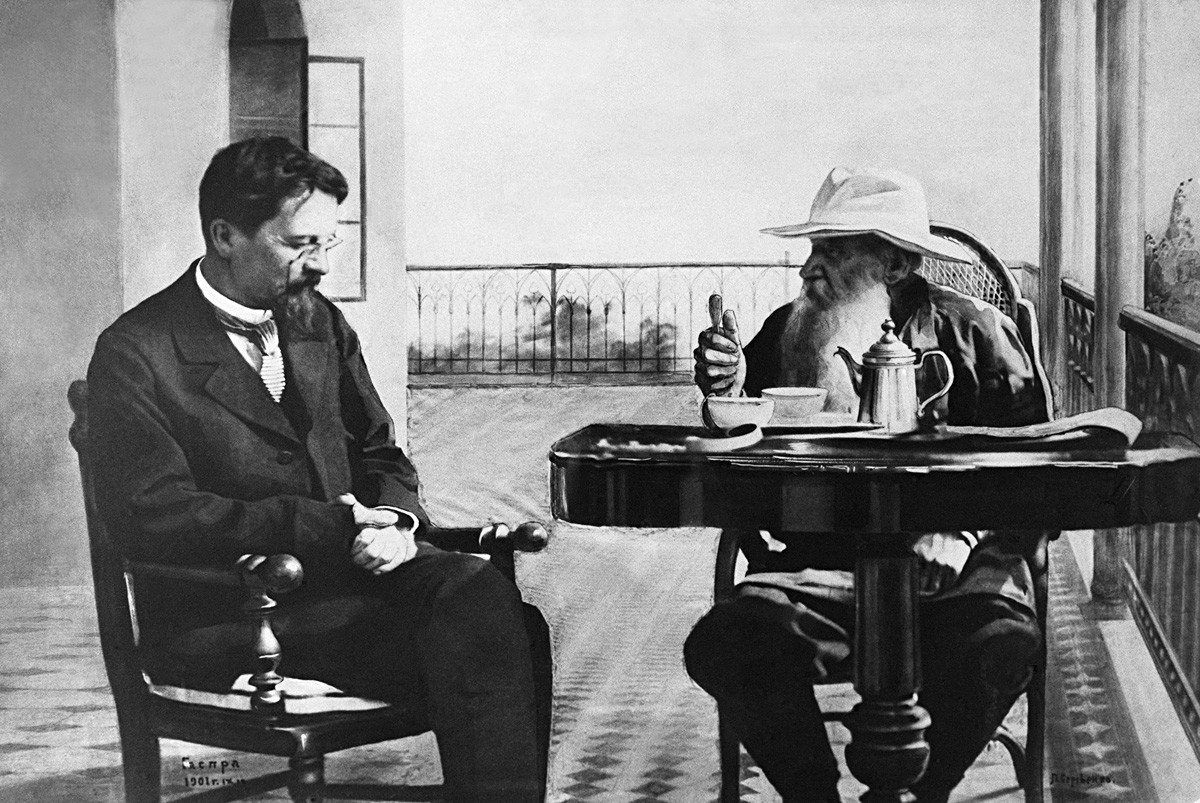 In Koktebel, there is the house of the famous Russian poet Maximilian Voloshin, where many poets of the Silver Age visited: Osip Mandelstam, Nikolay Gumilyov, Marina Tsvetaeva.

Mikhail Bulgakov shared his impressions of a trip to Crimea in an essay Journey to Crimea: he did not particularly enjoy Yalta, which, according to him, had become a very touristy place, where one had to 'bargain' all the time.

Another place that attracted many writers and poets were the mineral springs of the Caucasus mountains. In Pyatigorsk, Lermontov drank mineral waters to improve his health and captured the life of aristocrats holidaying there in his novel A Hero of Our Time. The Caucasus turned out a fateful place for the poet: he was killed in a duel here. 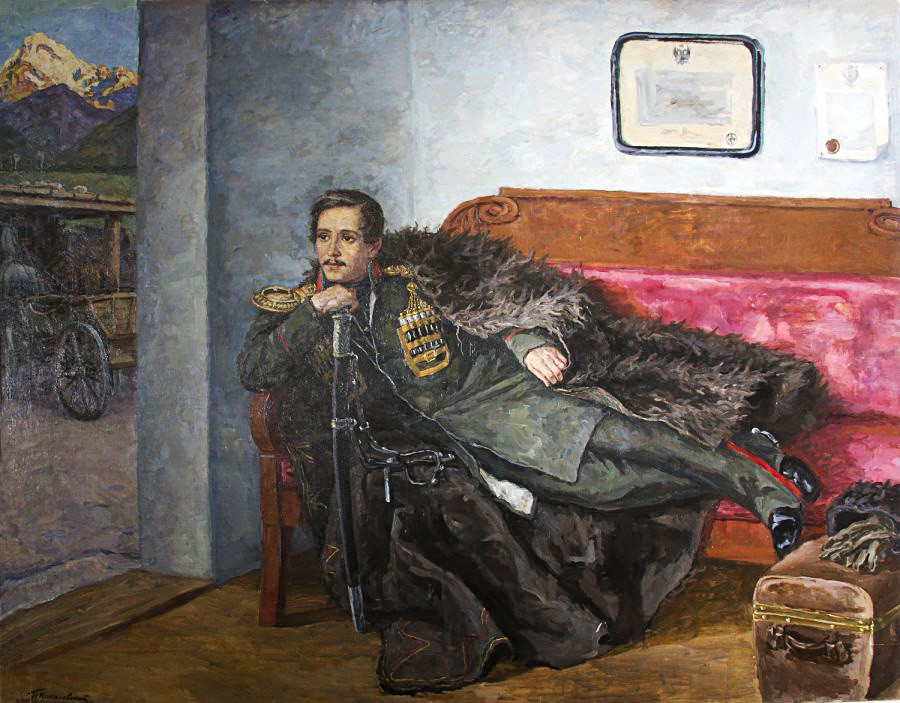 'Lermontov in the Caucasus' by Petr Konchalovsky

Prior to Crimea, Pushkin spent two months in the Caucasus, taking hot sulfur baths in Kislovodsk and Yessentuki and writing the poem The Prisoner of the Caucasus. Later, he traveled to Georgia and Armenia, where he wrote A Journey to Arzrum.

Leo Tolstoy wrote his own The Prisoner of the Caucasus, a novella based on his experience of fighting in the Caucasus as a young man. He was interested in highlanders' stories in his later years too: he traveled to Tiflis (present-day Tbilisi) and spent many years working on the novel Hadji Murat.

Poet Sergei Yesenin too traveled around Georgia and Azerbaijan: there are images of the Orient and Persian motifs present in many of his poems. Mayakovsky called Georgia a paradise. He loved Tiflis, same as Pasternak, who was friends with many Georgian poets and translated a lot of their works.

It was Gogol who gave birth to the tradition whereby the best works about the Russian people and Russia were written abroad. He had gone traveling, to take a break from work and writing, and that was when he wrote his main book, Dead Souls. His beloved Rome became a second home to him.

After his second marriage, Dostoevsky went traveling to Europe (not on a honeymoon trip, but to hide from creditors). He lived in Switzerland, then moved to Italy. It was here that he wrote most of the novel The Idiot. The legend has it that it was in Florence that he came up with his famous phrase: "Beauty will save the world." 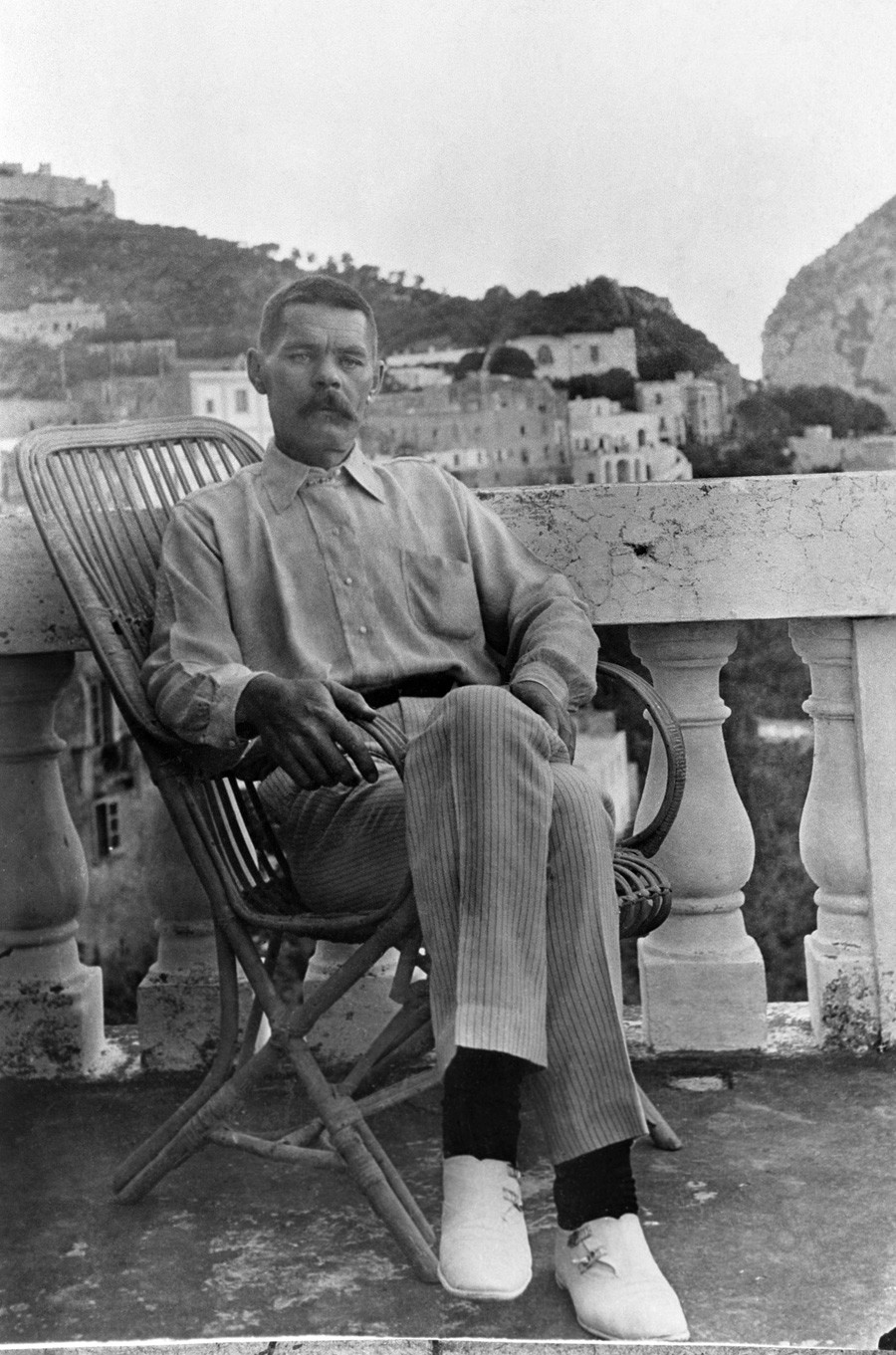 Gorky went to Italy to be treated for tuberculosis, and ended up spending 15 years there, on and off. For a long time, his home was a villa on Capri, where many famous Russians, including Bolshevik leader Vladimir Lenin, came to visit. Later, the writer returned to Russia and left again, spending a long time at the villas and sanatoriums in Sorrento. 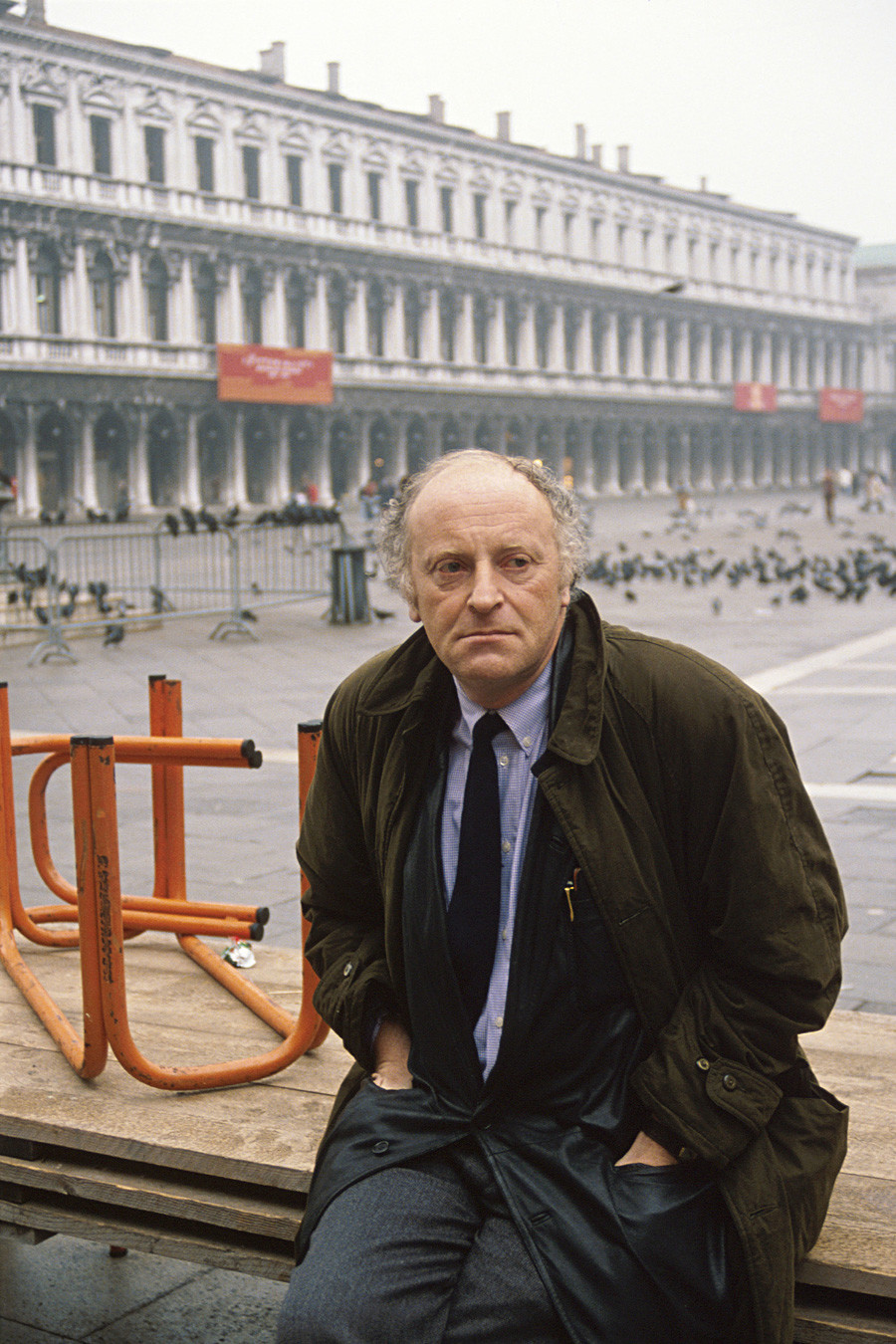 Russian Nobel Prize for Literature in 1987, Joseph Brodsky photographed in Venice in 1989

Brodsky loved Venice and - after he had emigrated to the USA - visited there every winter. Its winter weather and misty chill must have reminded him of his native Petersburg. He loved the water of its canals and loved wandering alone around the city, which for once was empty of tourists. Venice became the subject of his famous essay Embankment of Incurables.

Several years after his release from hard labor, Dostoevsky went to German resorts to improve his health. It was there that he became addicted to gambling. He played and lost a lot in Baden-Baden, Wiesbaden and Bad Homburg, an experience that he would later reflect in his novel The Gambler.

In fact, Baden-Baden was quite a 'Russian' resort altogether. Ivan Turgenev loved it here and wrote some of his major works here: most of A Sportsman's Sketches as well as novels about Russian aristocrats in Europe, Asya, Smoke, Virgin Soil.

Even the great moralizer Leo Tolstoy played the roulette here, when he was young. Although he did reproach himself for it later.

This did not always qualify as a holiday, but in the 20th century Russian writers began to travel around the United States too. Yesenin followed his dancer wife on a tour there and, it must be said, was very bored and rather jealous of her success, because back there he was not known to anyone. 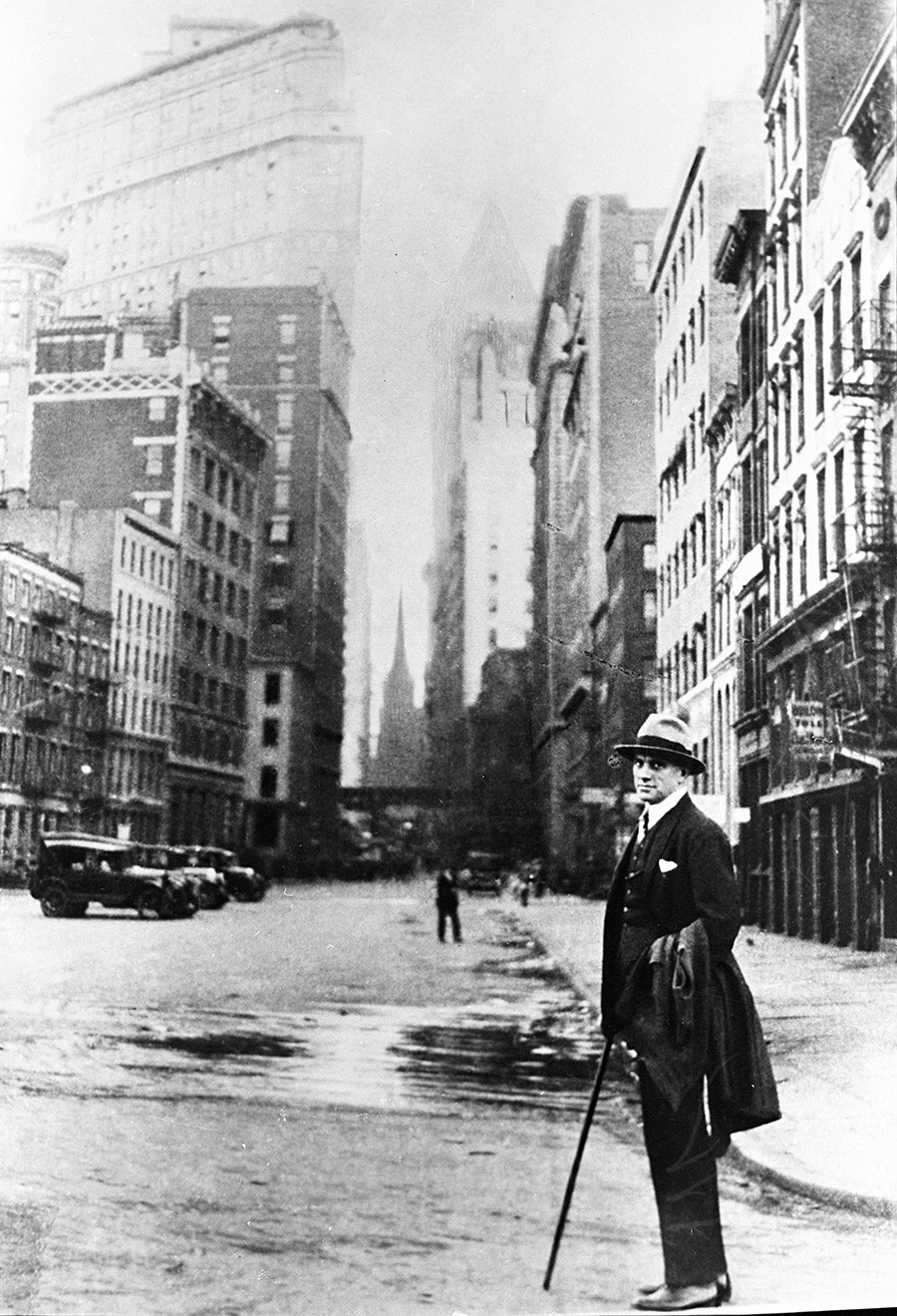 Mayakovsky traveled around several states giving performances and even had a passionate love affair with an American, Elli Jones, who later had a daughter by him.

Gorky came at the invitation of local socialists and immediately caused controversy: puritanical Americans found out that he and his companion Maria Andreyeva were not married and threw them out of the hotel in disgrace. Furthermore, he was not accepted in any other hotel either. Gorky hated New York City, comparing it to “the yellow devil”, an iron monster that devours people. And he condemned its inhabitants' obsession with money.

One of the most famous literary testimonies about traveling around the United States was left by Ilf and Petrov. In their Little Golden America, the duo described their road trip from the east to the west coast.