Moscow's Arkhangelskoye estate: Once a noble nest and then a Soviet sanatorium (PHOTOS)

Travel
Vadim Razumov
Legion Media
An estate has stood on this land as long ago as Ivan the Terrible's reign. A century ago it became a museum, and today it's one of the most beautiful palaces and gardens in Moscow‘s environs.

This estate was first mentioned in written sources in the 16th century, and by the 17th century it belonged to the nobleman (boyar), Fyodor Sheremetev, the man who at the end of the Time of Troubles brought the first Romanov tsar, Mikhail, from a monastery in Kostroma to Moscow. 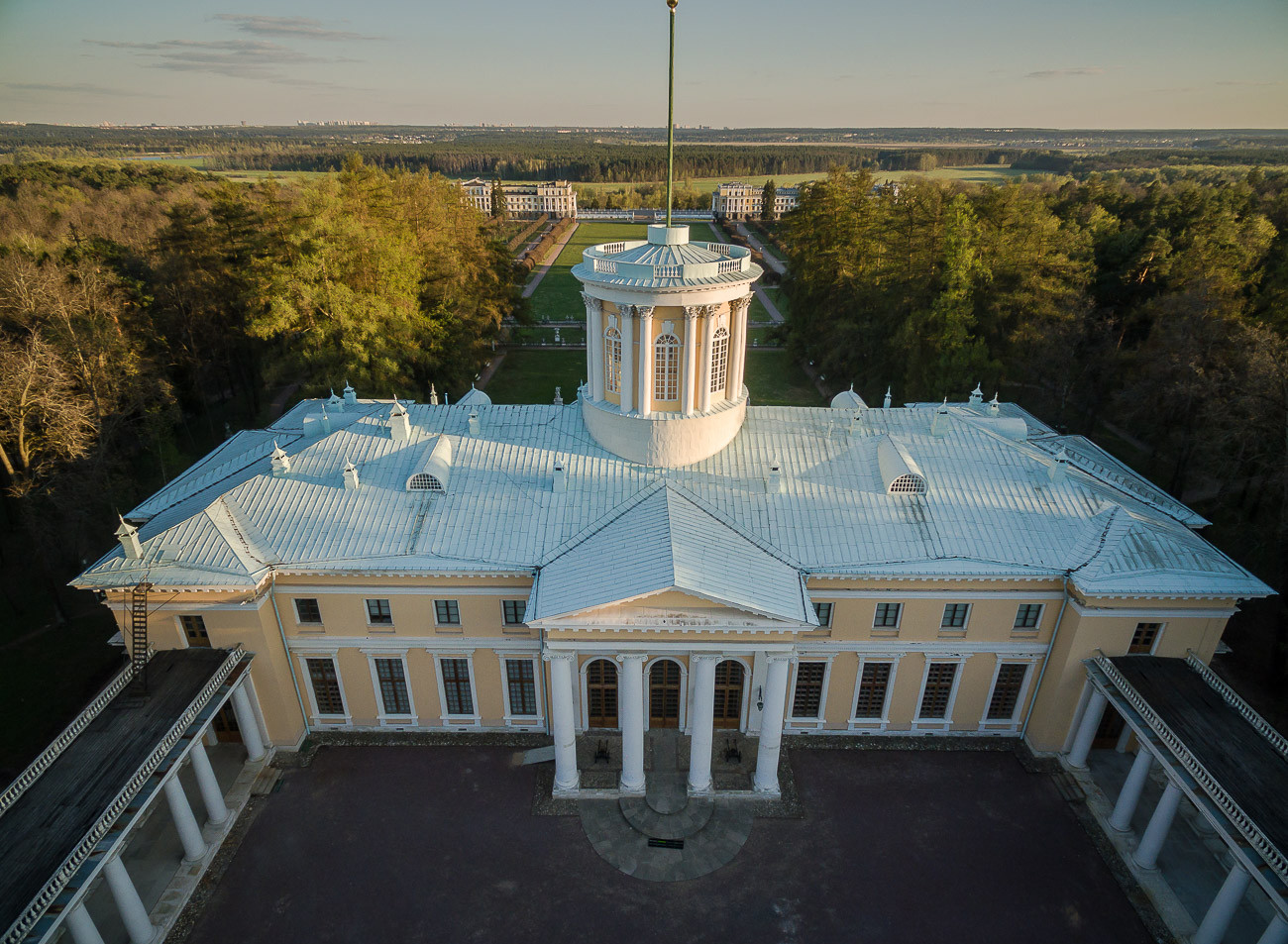 Subsequently, Arkhangelskoye was owned by several other famous noble families. On the order of boyar Odoevsky in 1667 its oldest surviving building, the Church of Archangel Michael, was built; this gave the name to the entire estate, Arkhangelskoye. 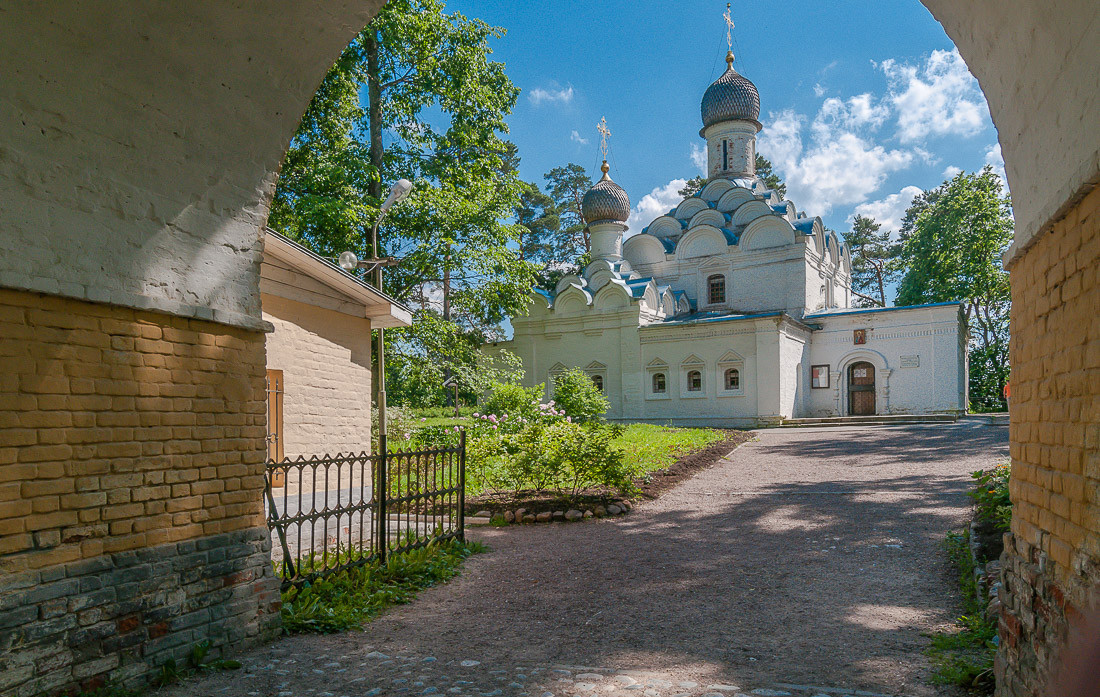 The Church of Archangel Michael

In 1703, the estate passed to Prince Dmitry Golitsyn, a close associate of Peter the Great. Then, it was inherited by his son, and subsequently his grandson, Nikolai Golitsyn, who also was a senior court official in charge of entertainment at the court of Tsar Paul I. Nikolai commissioned French architect Jacques Jacob Guerne to design the Caprice Palace. 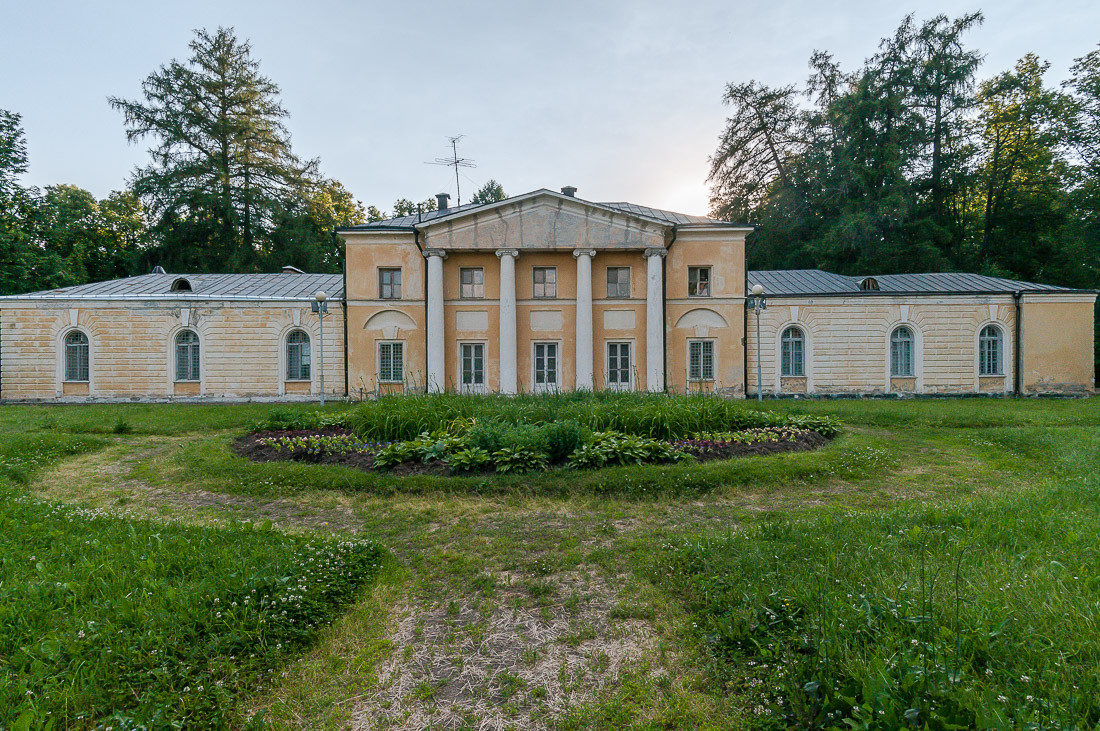 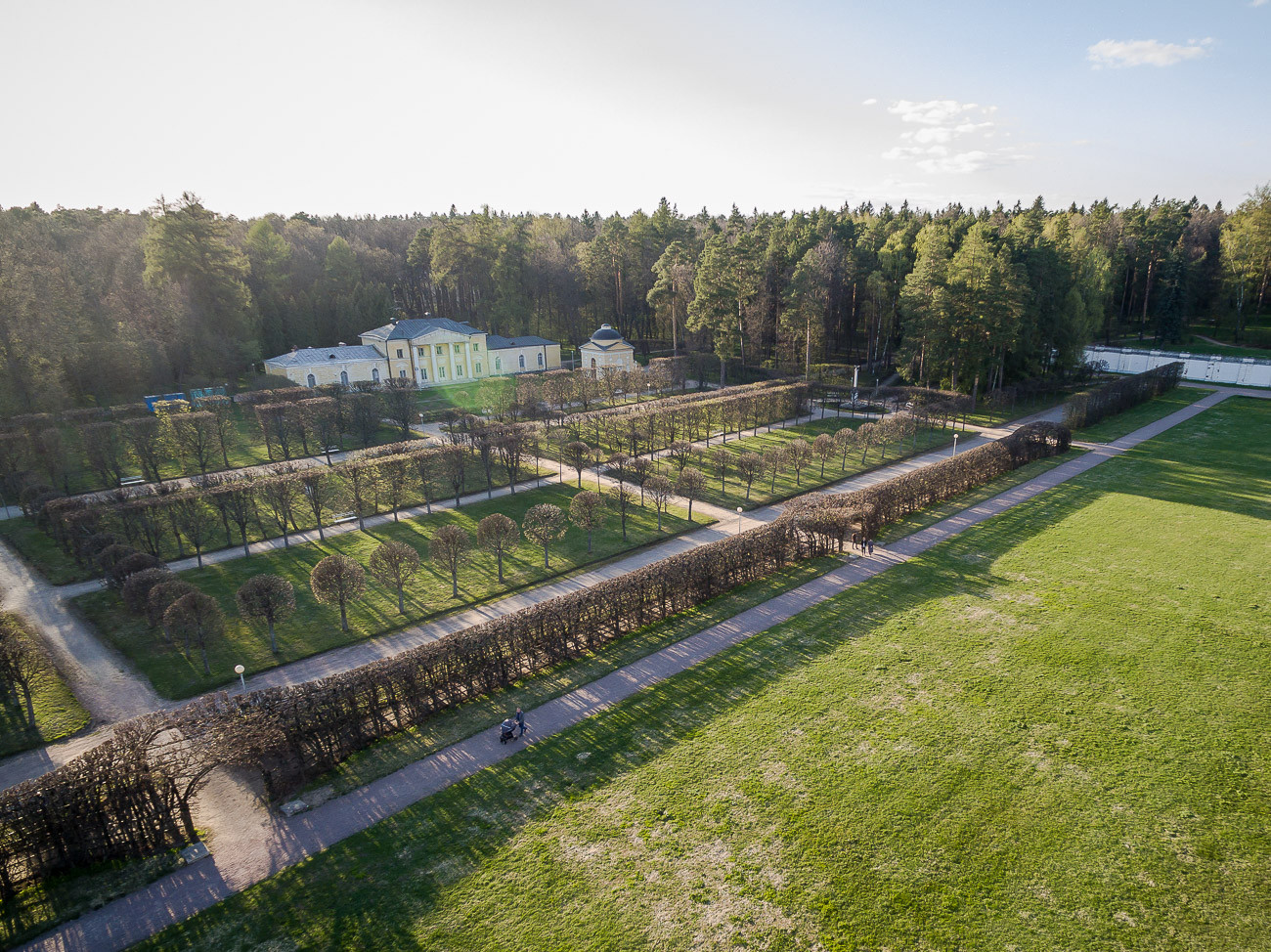 A very important period in Arkhangelskoye's history came when the estate was owned by Nikolai Yusupov. An ancient princely family, the Yusupovs were one of the richest in Russia. Their origins went all the way back to Yusuf-murza, the Tatar-Mongol commander of the Nogai Horde, and whose sons later served Ivan the Terrible. 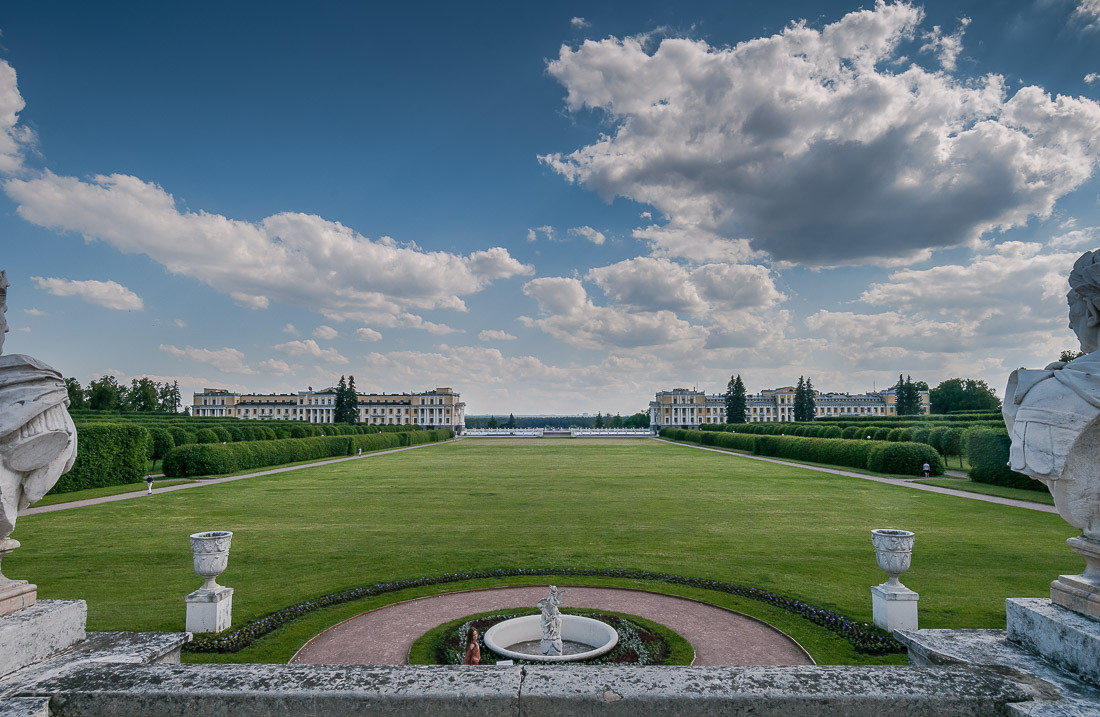 View on the Moskva River from the main palace

Nikolai Yusupov bought Arkhangelskoye in 1810 because he was looking for a place to store his art collection. He was known to act as an intermediary whenever the Russian tsar commissioned works from European artists. 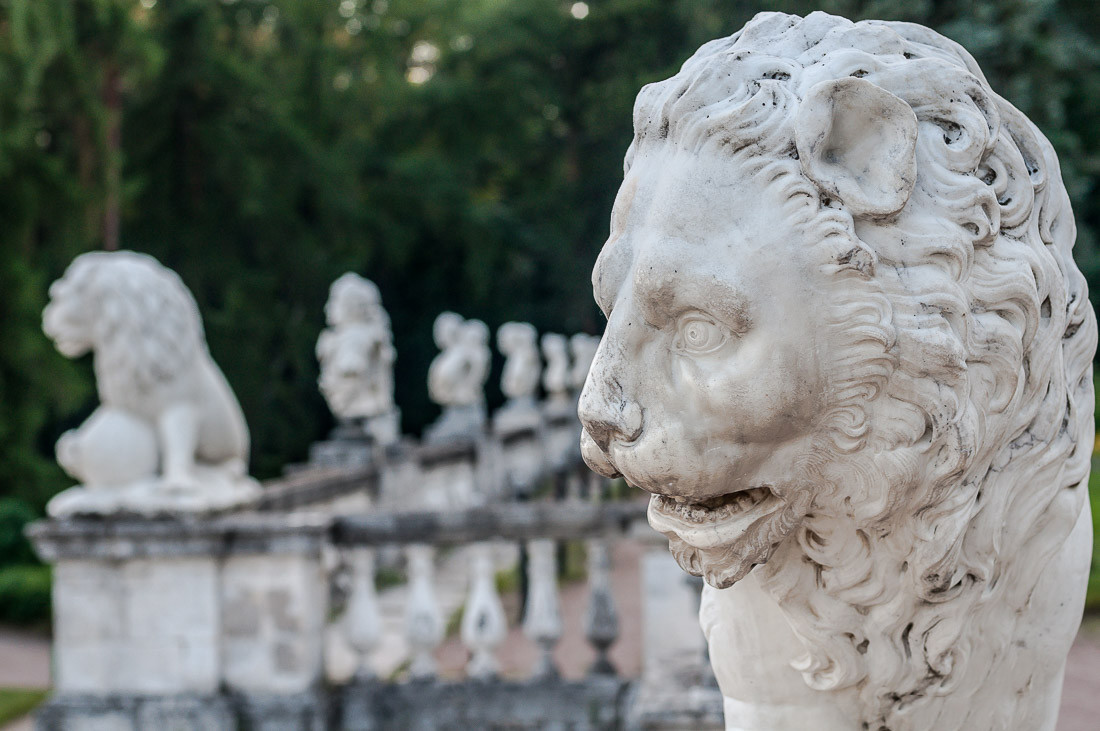 As one of the most famous patrons of the arts of his era, Nikolai's private collection contained genuine masterpieces, including a replica of Antonio Canova's “The Kiss”. 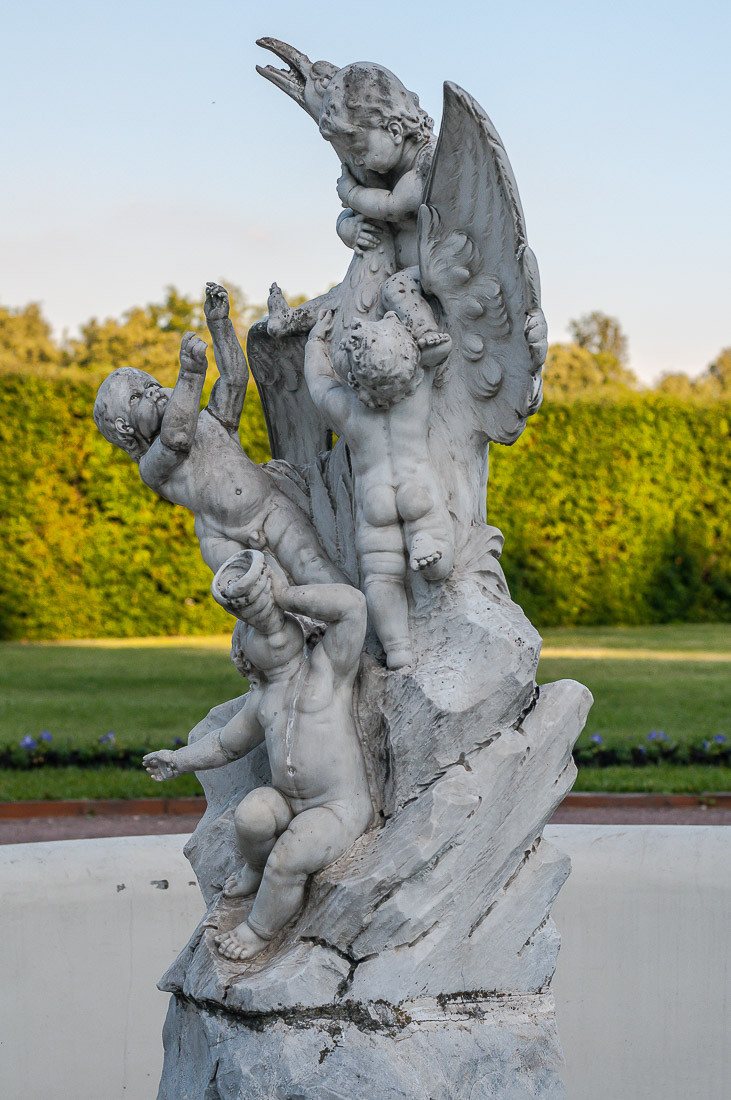 Under the sophisticated eye of Nikolai, Arkhangelskoye became known as the "Moscow Versailles", and at this time the palace and grounds acquired their distinctive look. 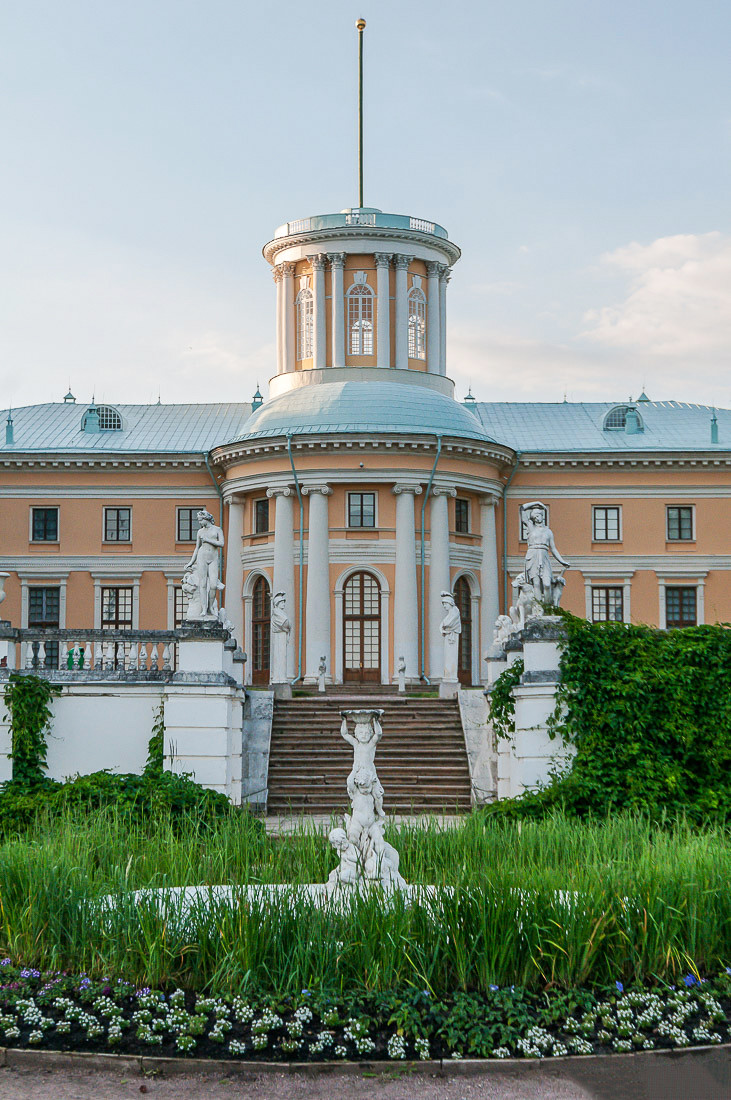 With the outbreak of the Patriotic War of 1812, Nikolai evacuated his collection to the city of Astrakhan. This proved a wise decision because the estate was badly damaged by Napoleonic soldiers, who plundered whatever they could upon their retreat. 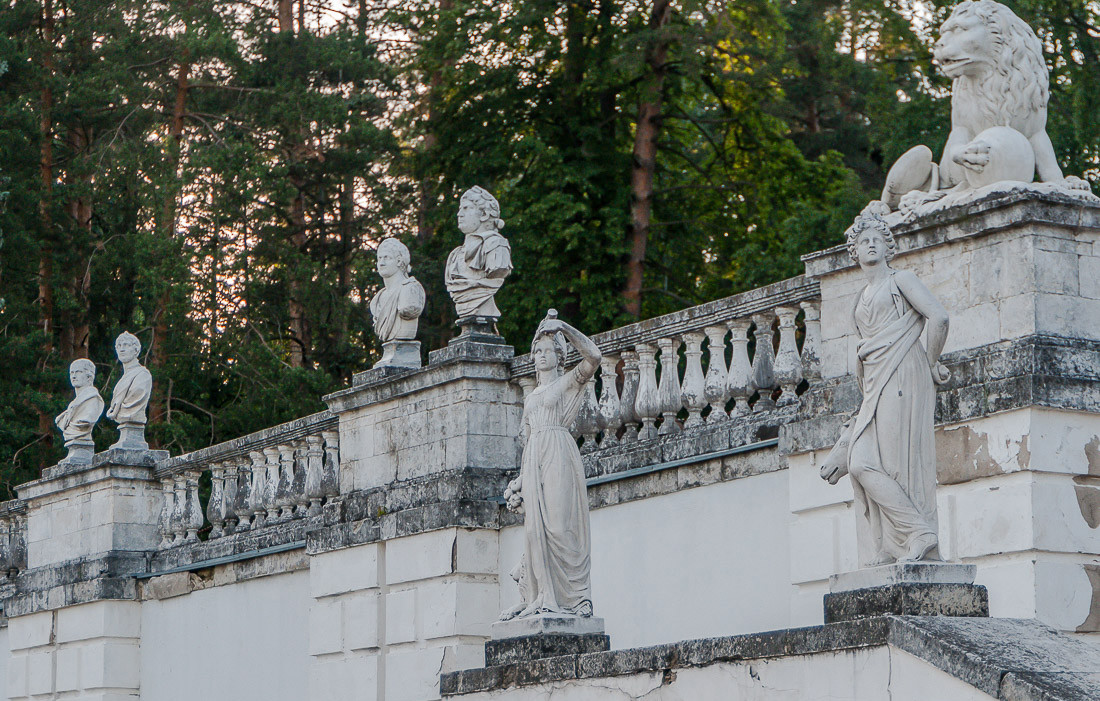 Over the years each visit by a Russian sovereign to Arkhangelskoye was commemorated with a column, and even as late as the mid 20th century five such columns stood at the estate. 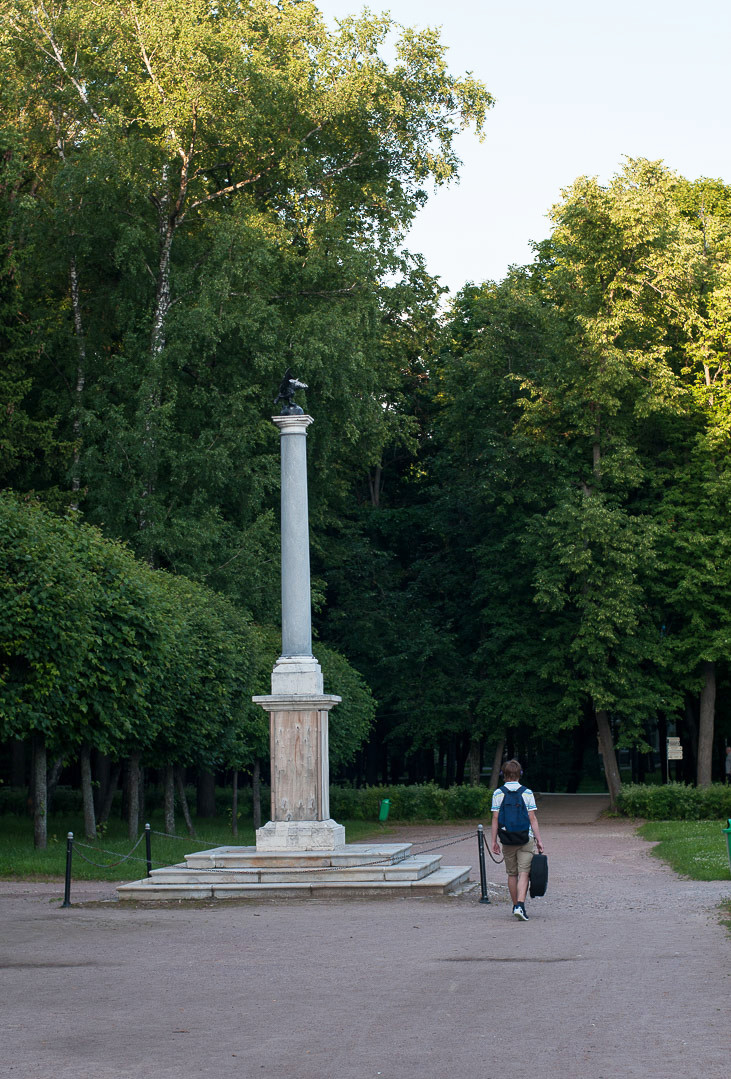 A column commemorating a tsar's visit

Ahead of an imperial visit in 1817, when the fifth anniversary of the victory over Napoleon was celebrated, Nikolai Yusupov decided to open a theater, and so he invited Italian architect Pietro di Gottardo Gonzaga to design the theater building and its sets. The result was a wooden structure on a stone foundation. Named after its designer, the Gonzaga Theater's original furnishings and sets have survived to the present day. 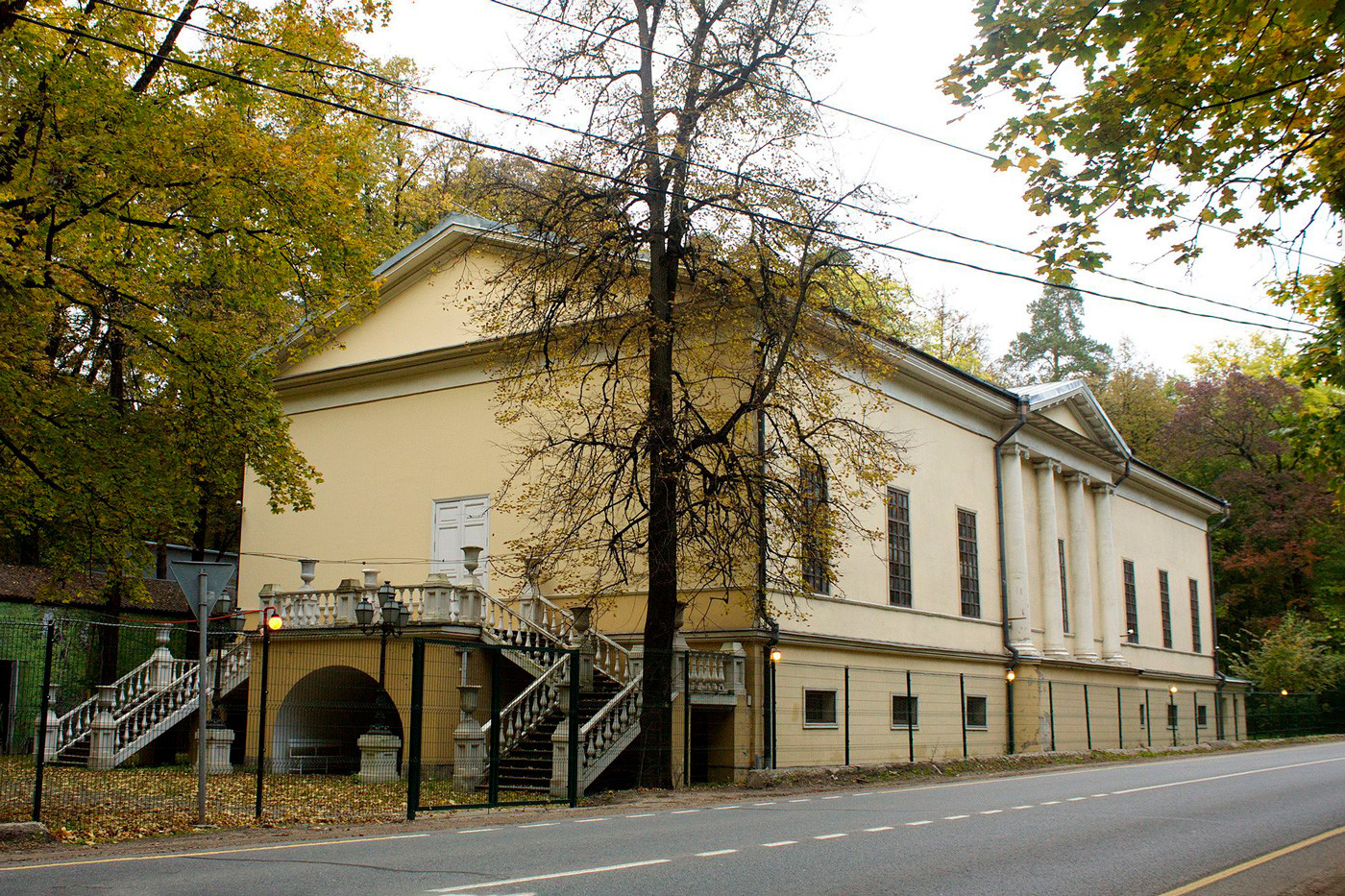 After Nikolai's death, the Arkhangelskoye art collection continued to grow. The task of storing and replenishing it was undertaken by his son's wife, Zinaida Yusupova, who was considered one of the most beautiful and educated aristocratic ladies in Russia. 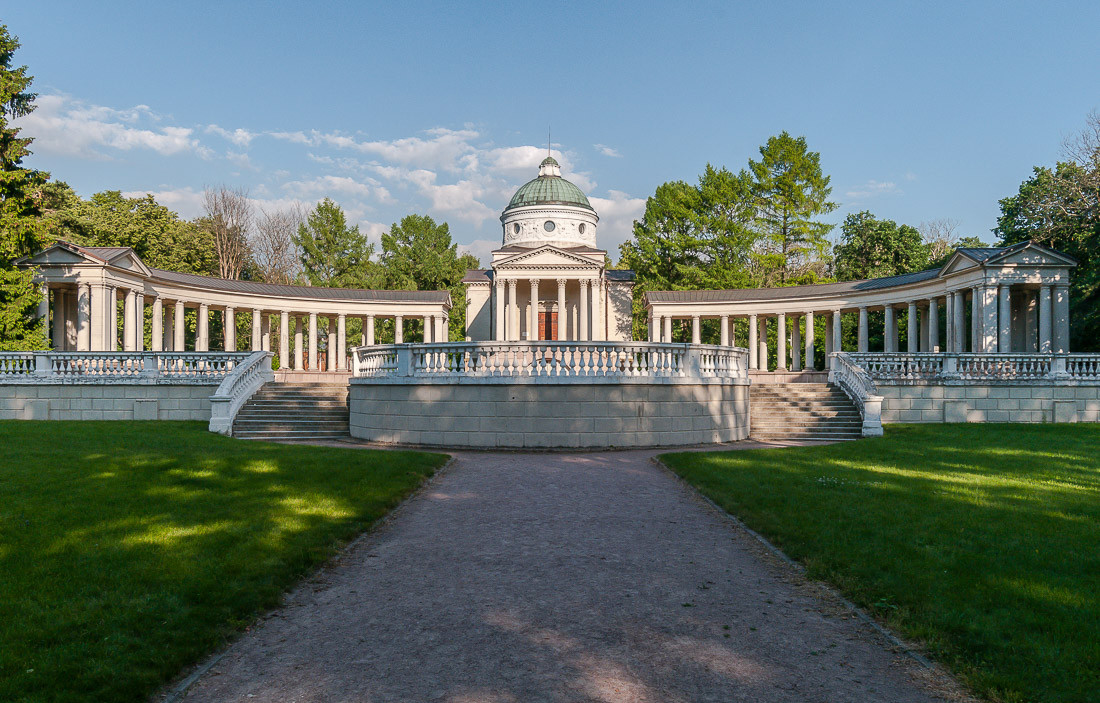 Nikolai's great-granddaughter, Zinaida Yusupova, began construction of a Yusupov family mausoleum, which was designed by the architect Roman Klein. The architect envisaged it as a neoclassical portico with a semi-circular colonnade. However, because of the 1917 Bolshevik Revolution, the Yusupov mausoleum was never completed. 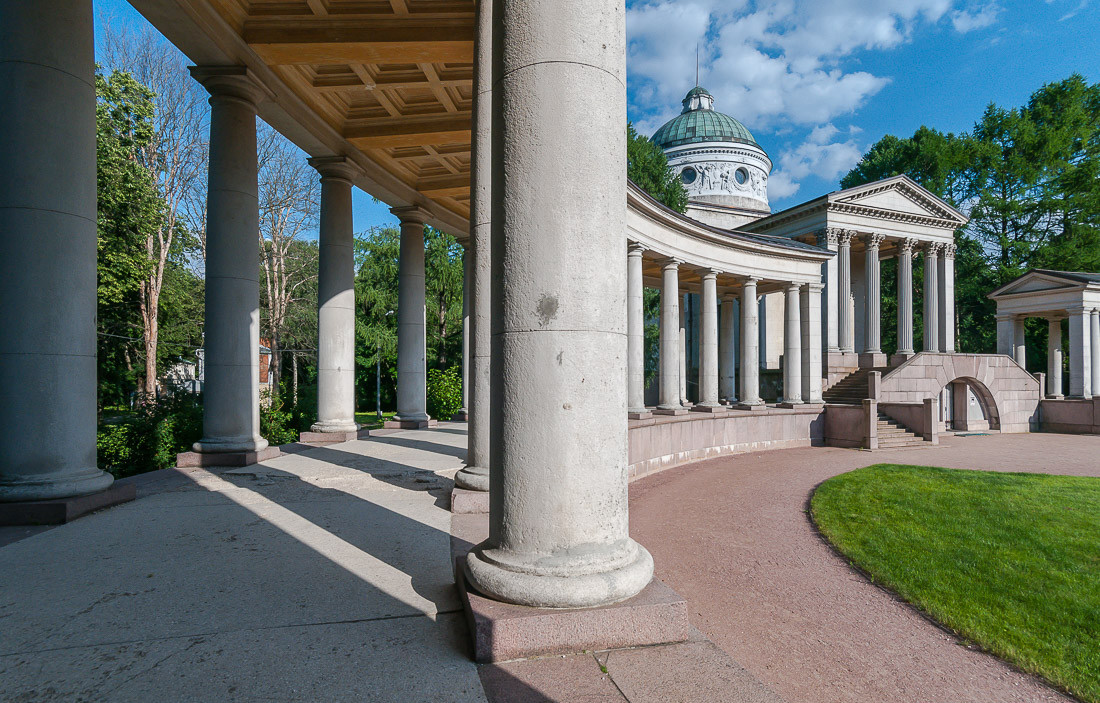 Arkhangelskoye received the status of a museum in 1919, and its church buildings were given state protection, which saved them from complete destruction by the Bolsheviks. 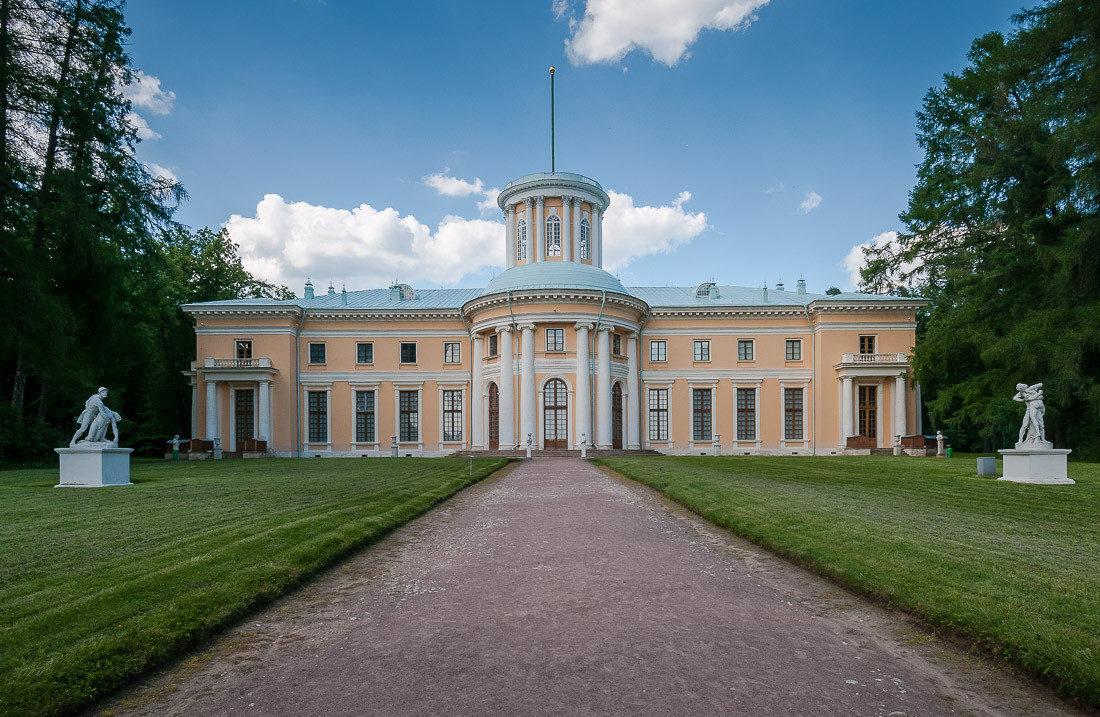 At first, the museum's main goal was to study the artistic life of the estate's serfs. At the same time, the staff carried out wider research, such as cataloguing all the art works and park statues. 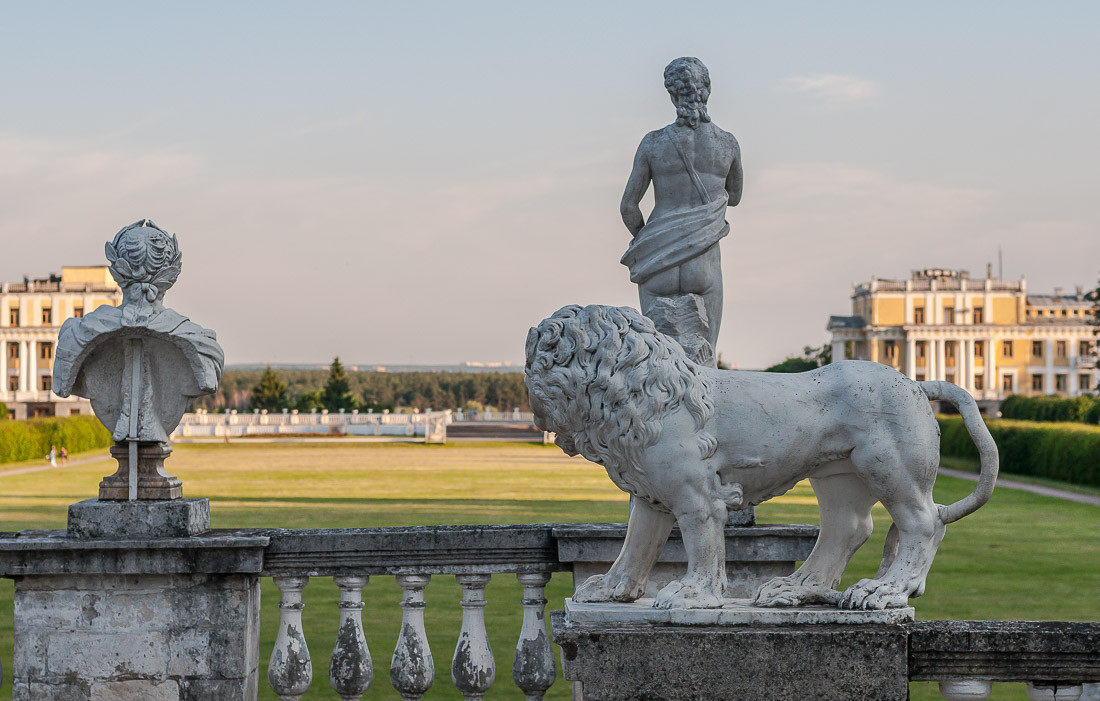 In the 1930s, a sanatorium for the military was built on Arkhangelskoye’s grounds, and these two huge buildings changed the view of the Moskva River valley. 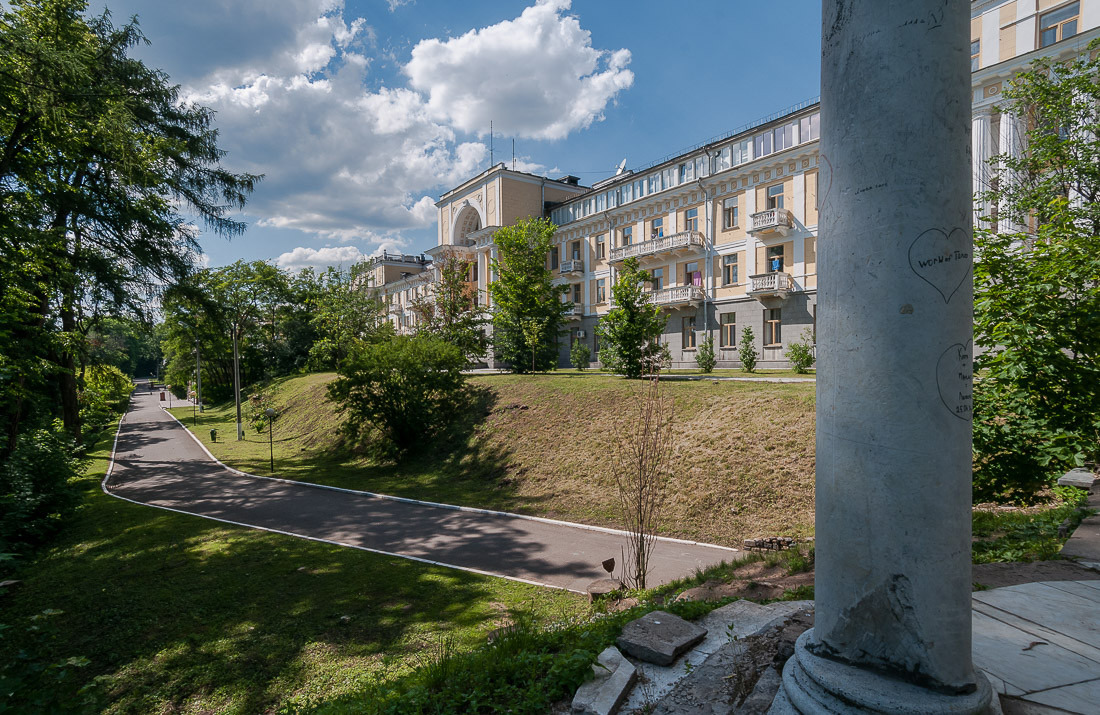 Subsequently, the buildings were handed over to the CSKA sports club, which set up a training center for its football and hockey players, and which remained in operation until the 1990s. 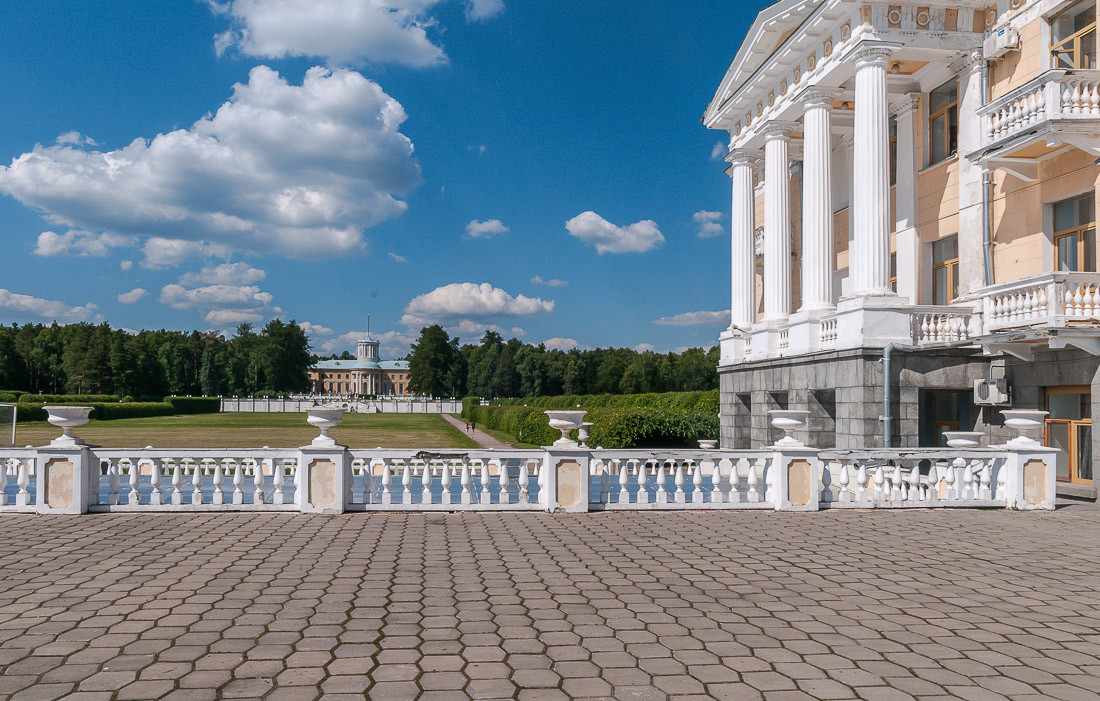