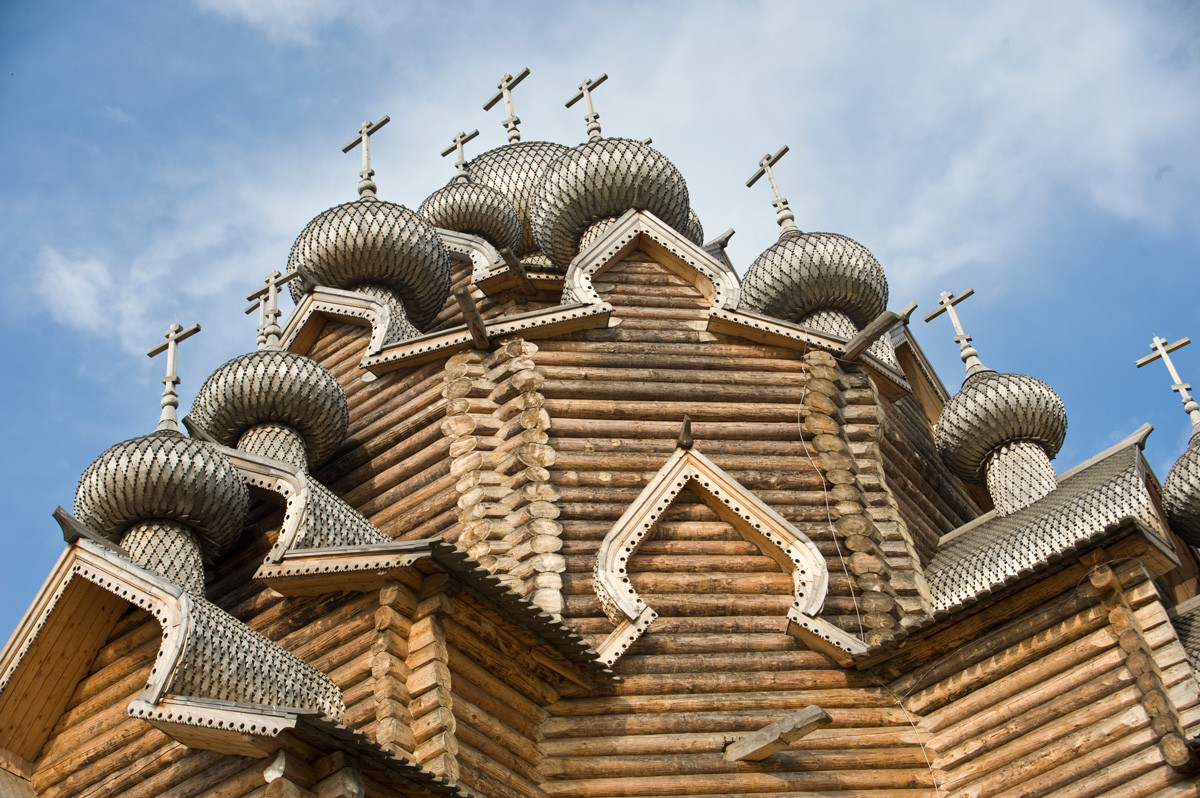 In summer 1909, the Russian chemist and photographer Sergei Prokudin-Gorsky conducted an extensive expedition along the Mariinsky Waterway System linking St. Petersburg with the Volga River basin. The first major component of the system was the Mariinsky Canal, which connected the Vytegra River, which flows into Lake Onega toward St. Petersburg, and the Kovzha River, which flows south into White Lake.

The most impressive landmark on this stretch of the waterway — indeed, one of the most impressive in the Russian North — was the spectacular wooden Church of the Intercession of the Virgin at Ankhimovo, photographed by Prokudin-Gorsky from the high left bank of the Vytegra River. Built in 1708 on the site of a former 16th-century convent, the Intercession Church was tragically destroyed in 1963 by a careless fire apparently set by vagrants. Remarkably, this complex structure with its multitude of domes has now been rebuilt in a very different location near St. Petersburg. 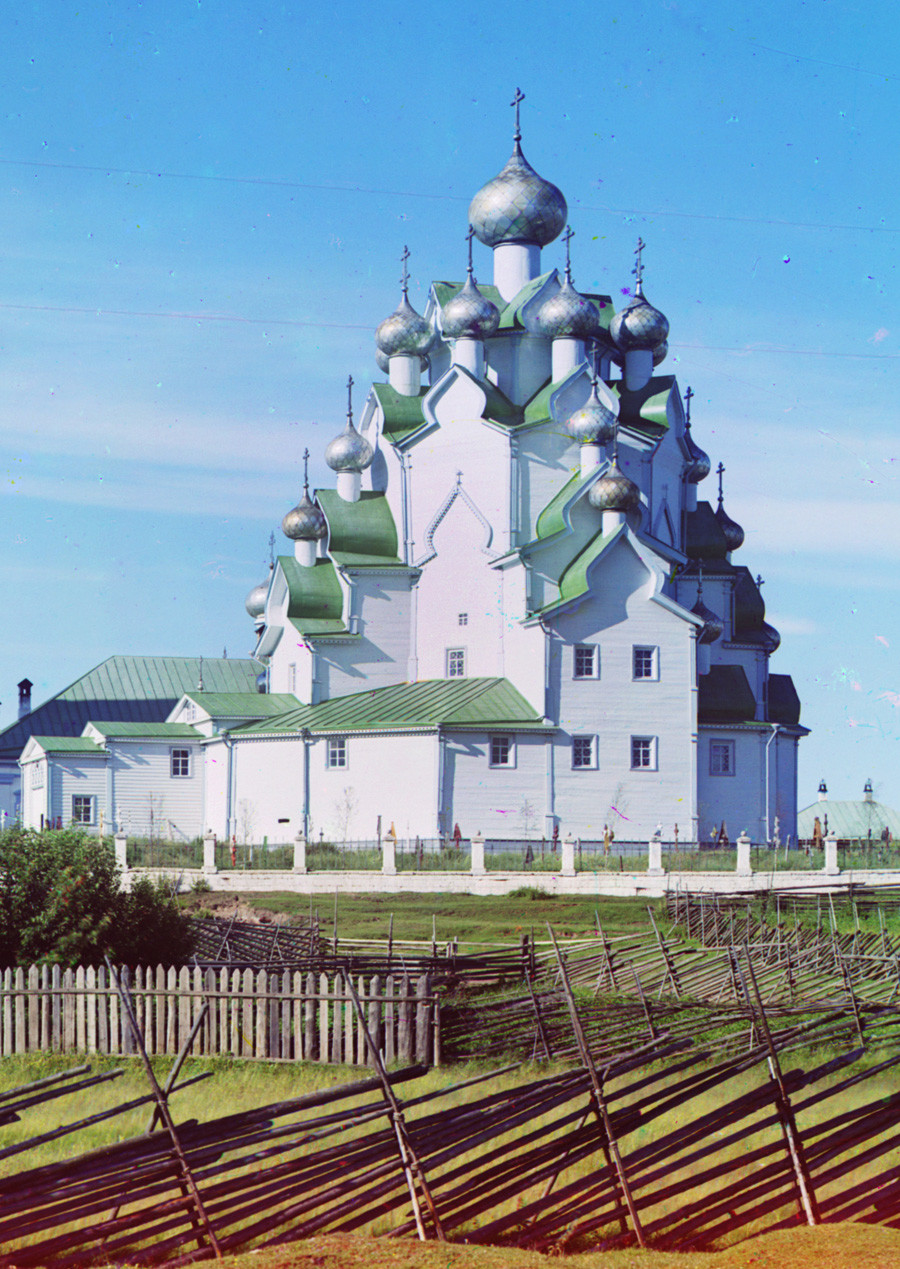 In the medieval period (14th-15th centuries) the village of Ankhimovo was the center of an area known as Vytegorsky Pogost, part of a network of large villages created beyond Lake Onega by settlers from Novgorod the Great. This region of the Russian North acquired special importance for Peter the Great’s geopolitical strategy after the founding of St. Petersburg in 1703. 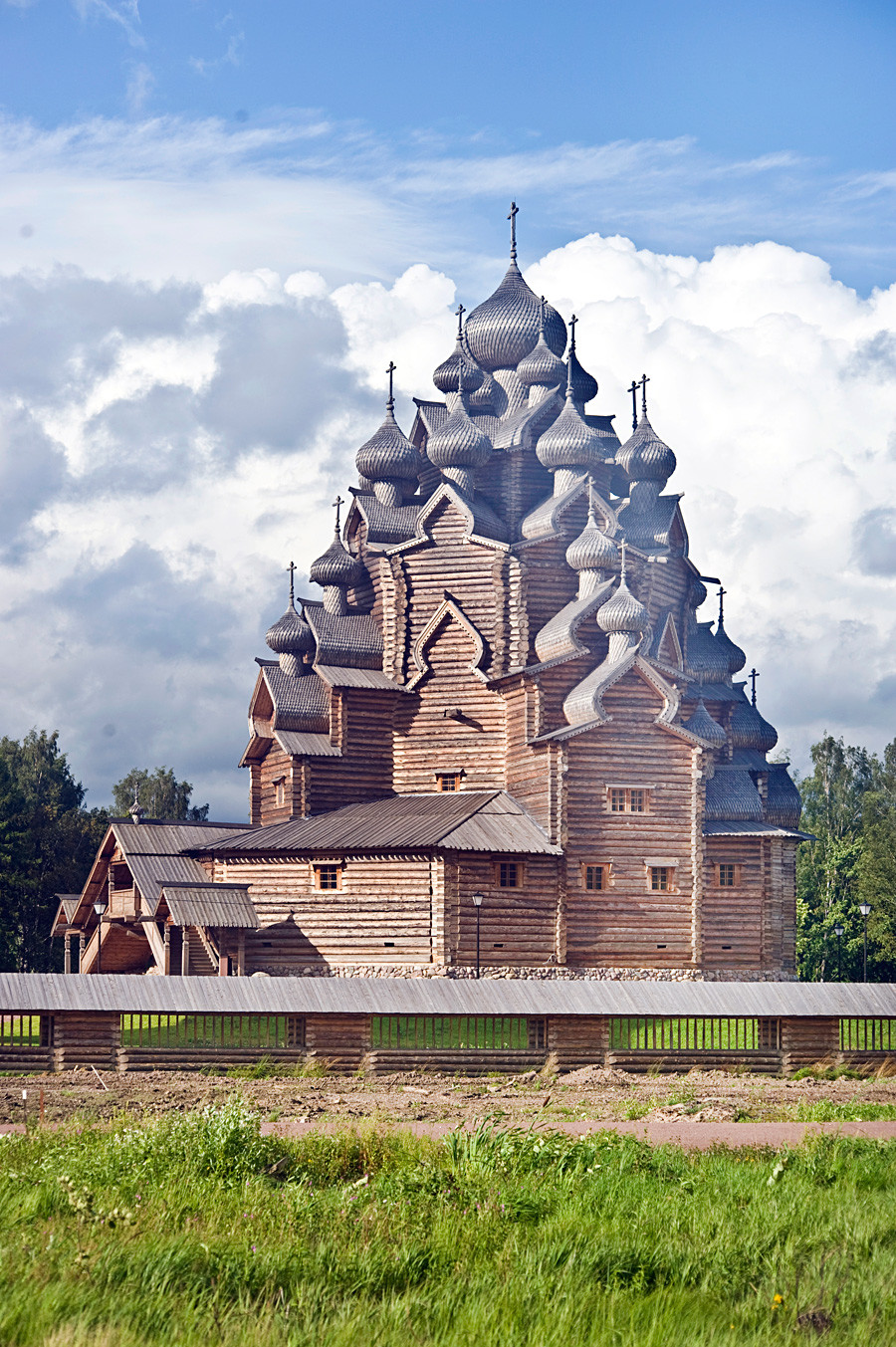 Indeed, popular legends attributed the church to Tsar Peter. Although there is no documentary evidence in support of this version, it is reasonable to assume that this grandiose structure, as well as the similar, renowned Church of the Transfiguration at Kizhi Pogost (1714), served to proclaim Russian presence in the strategic territory around Lake Onega.

Toward the end of Catherine the Great’s reign, the Intercession Church was taken apart, repaired with a replacement of decayed lower logs and repositioned on a stone foundation in 1793. Subsequently, the massive log structure was entirely encased in plank siding painted white, as seen in Prokudin-Gorsky’s photographs. 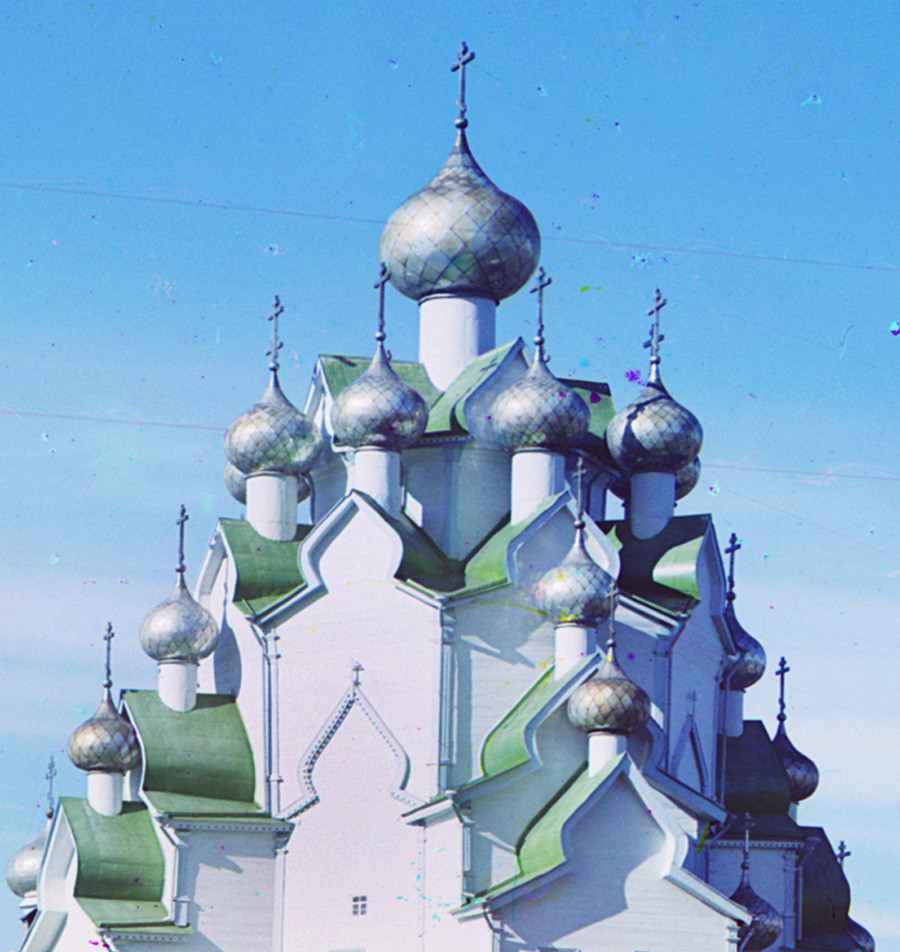 Built of massive pine logs. the soaring form of the Church of the Intercession consisted of an octagonal core structure with four large extensions at the compass points. These extensions in turn ascended in two stages, with each level supporting cupolas over peaked “barrel” (in Russian bochka) gables. 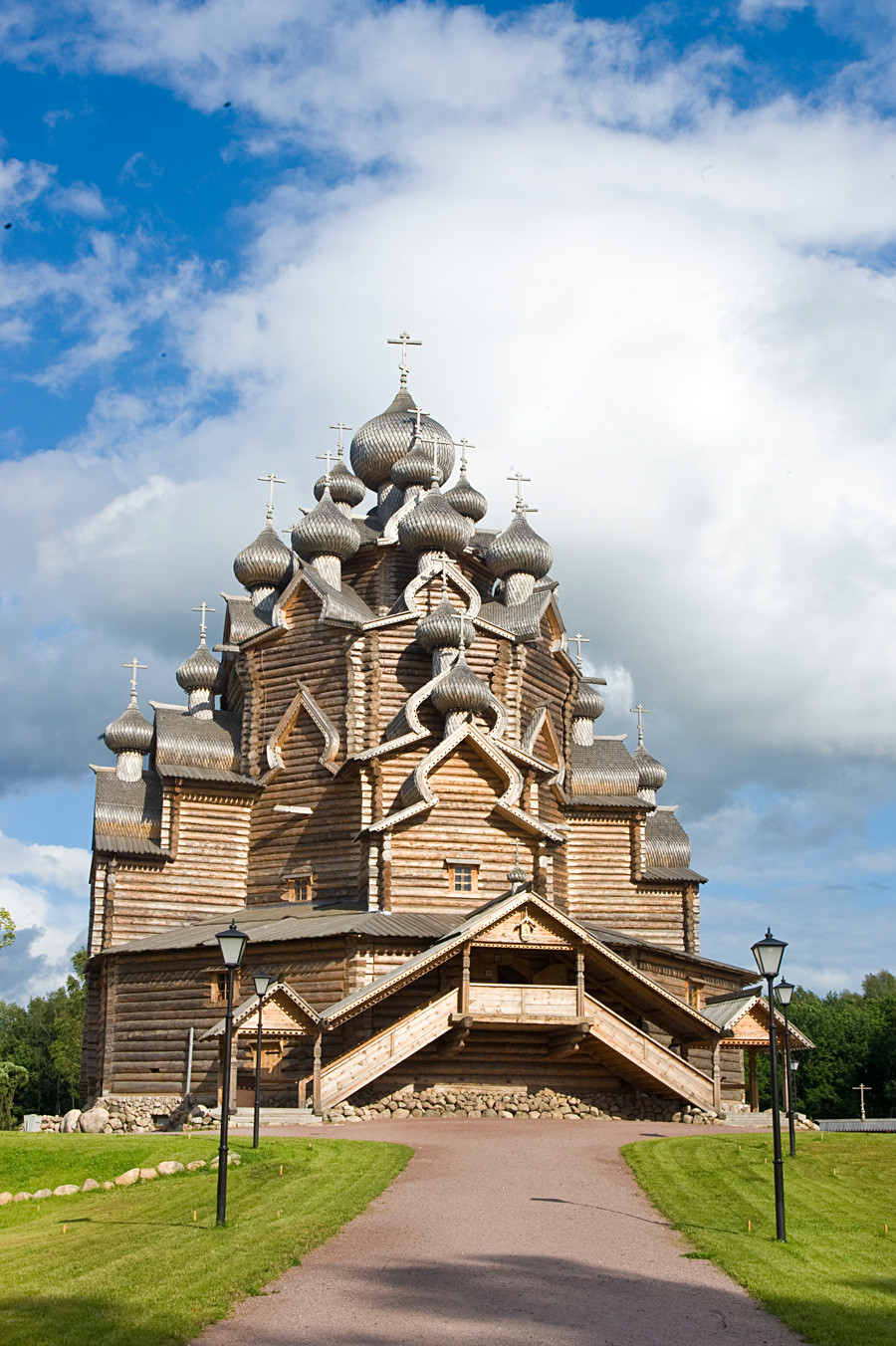 The four sides located between the “compass” extensions rose as unobstructed majestic facades. The center of these diagonal facades displayed an outline of the barrel gables that crown the flanking extensions. This sophisticated decorative and structural detail was brilliantly captured in Prokudin-Gorsky’s view from the south.

The structure’s summit displayed a crown of eight domes, originally covered with aspen shingles. When the church was repaired, the wooden shingles were replaced with interlocking sheet metal squares visible in Prokudin-Gorsky’s photograph. 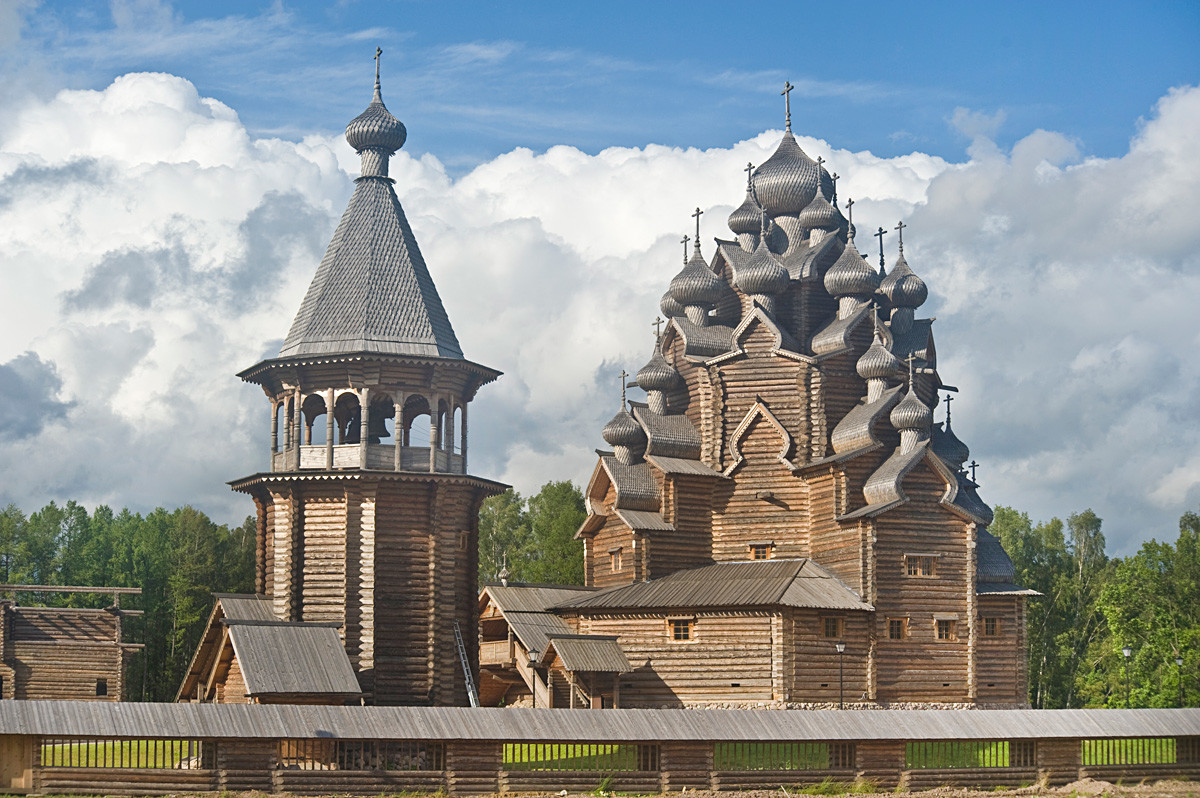 At the lower level on the west side, the church was encased by a gallery supported by extended projecting log. This area, which contained the main entrance, served as an elevated vestibule particularly necessary during long, snow-laden winters.

On the east side of the church the apse, which contained the main altar (dedicated to the Intercession), supported additional domes, as did flanking chapels dedicated to St. John the Divine and to St. George. Depending on the period, the total number of domes has been calculated as 24 or 25. 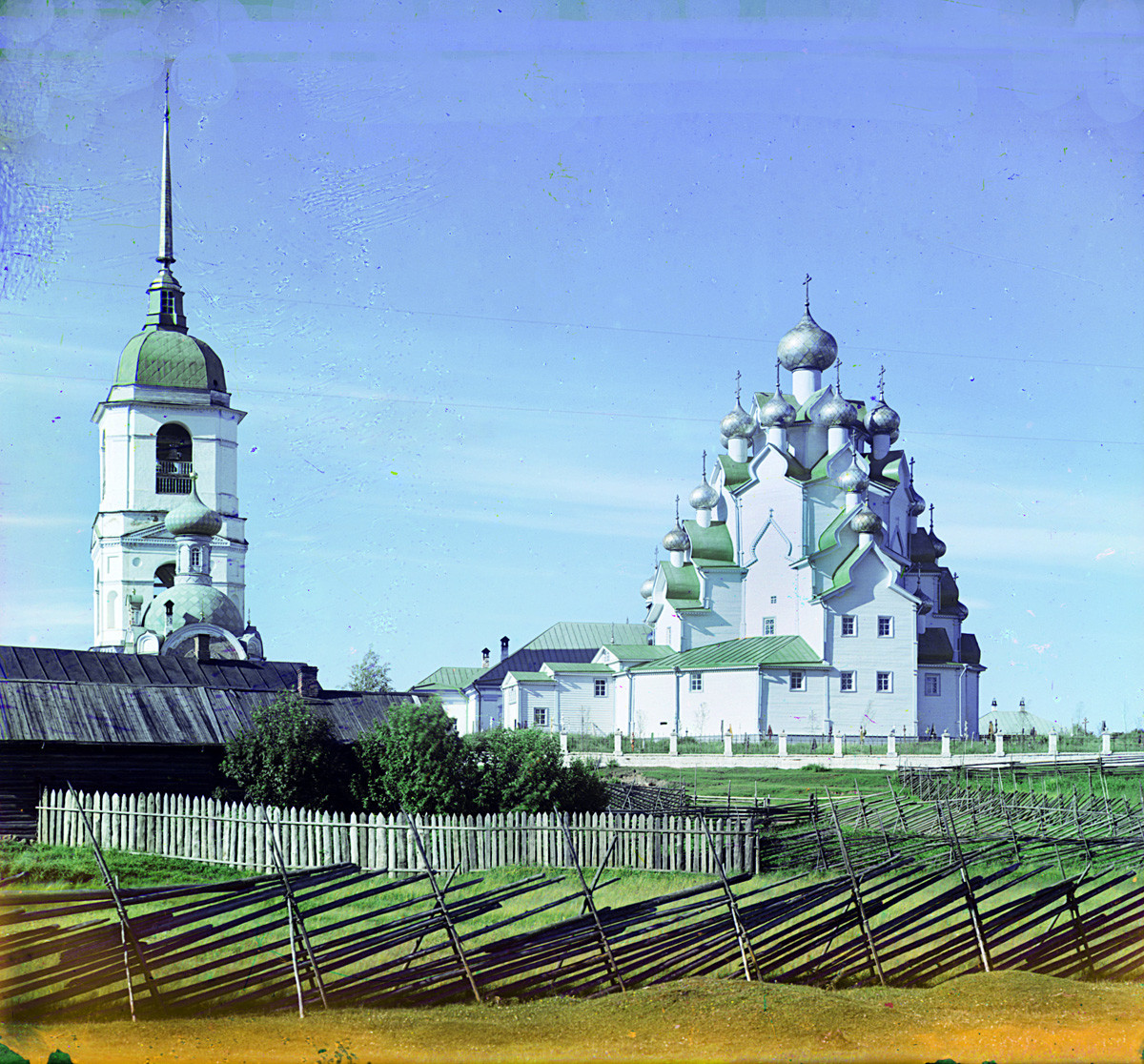 As at Kizhi, the Ankhimovo church was supplemented with other structures. Foremost among them was a heated brick church built for worship in the winter and dedicated to the Miraculous Icon of the Savior (1780), Located just to the north of the wooden Intercession Church and barely visible in Prokudin-Gorsky’s photograph, the Savior Church had a large free-standing bell tower. In the 1930s, the bell tower was demolished for brick, while the Savior Church was ransacked and then severely damaged by the 1963 fire.

The last component of the Ankhimovo ensemble was the Church of All Saints, built in 1905 as a burial crypt for the wealthy merchant Alexander Loparyov, who had made generous donations to the Intercession Church. The baroque dome of this small church is visible in Prokudin-Gorsky’s view and is still present in my photographs, despite the severe dilapidation of the structure. 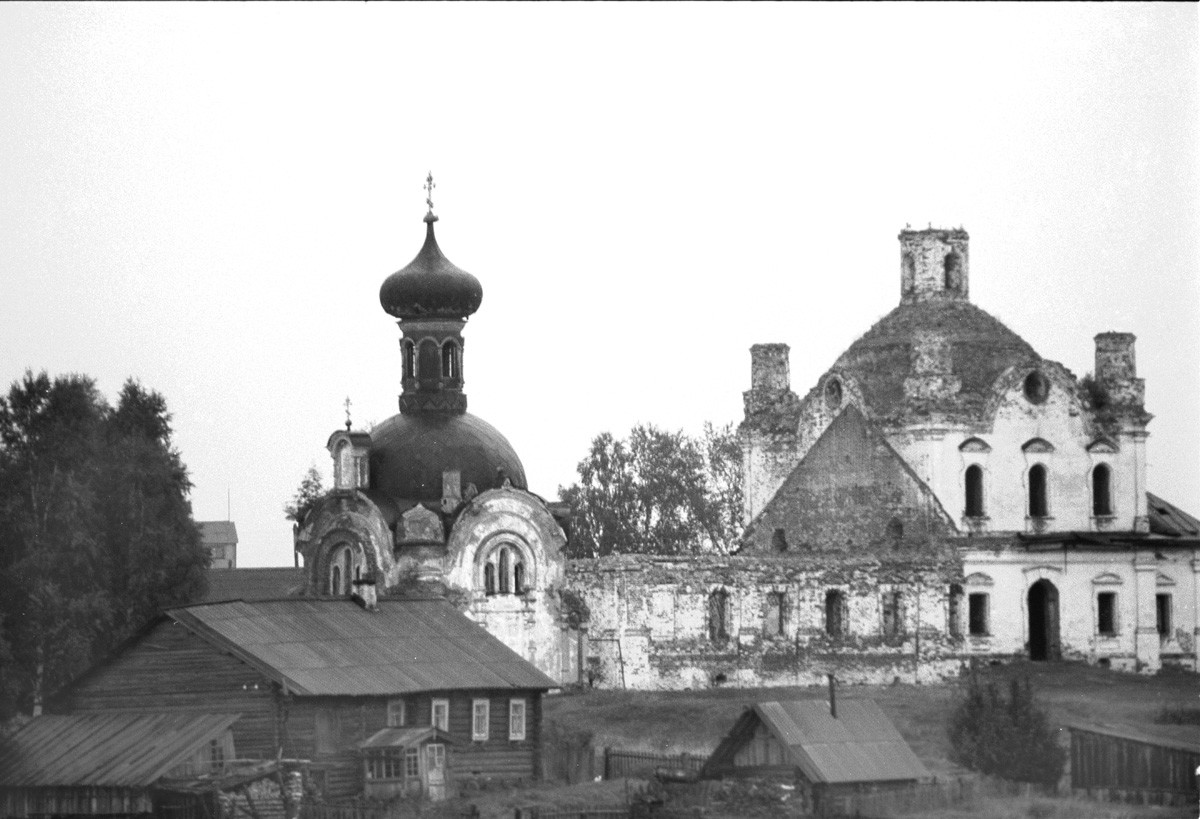 After the disastrous fire of 1963, thoughts of recreating the Intercession Church were based on detailed measurements done in the late 1950s by the prominent specialist on wooden architecture, Alexander Opolovnikov (1911-94). Yet resources for such a large project were unlikely, particularly at such a remote location.

Four decades after the fire, however, the vision of a reconstructed Intercession Church materialized on the territory of Nevsky Forest Park, located along the Neva River to the southeast of Saint Petersburg. This outdoor museum was conceived as a project to recreate lost monuments of wooden architecture and was given the name Bogoslovka, after an estate that had existed in the area during the 19th century. 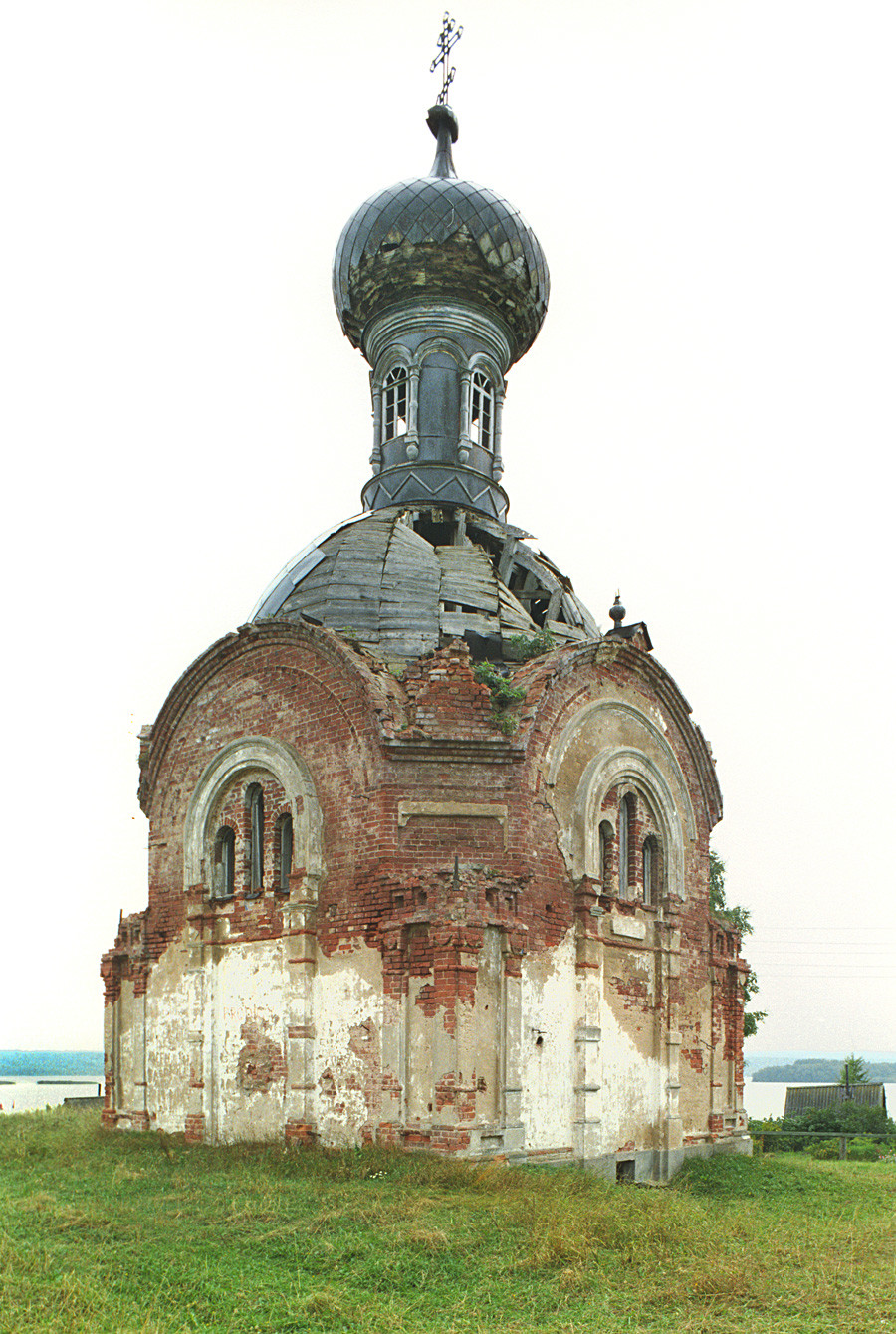 The centerpiece of the project was the Intercession Church, whose resurrection was supported at the highest state and church levels. Built in 2004-07, the design of the reconstructed church followed measurements recorded by Opolovnikov and strove to recreate the earlier 18th-century appearance, although some details remain conjectural. There is no plank siding over the log structure, and aspen shingles cover the domes. In addition, four small domes missing in Prokudin-Gorsky’s photograph have been restored on tiny barrel gables just beneath the top dome.

Choosing and curing the timber for such a large structure assumed special importance. The pine logs, felled in Karelia’s rocky terrain, were chosen with a minimum of 12 rings per centimeter, indicating slow, solid growth. Much of the preliminary work on the logs was done near the Karelian capital of Petrozavodsk.

Connecting past and present 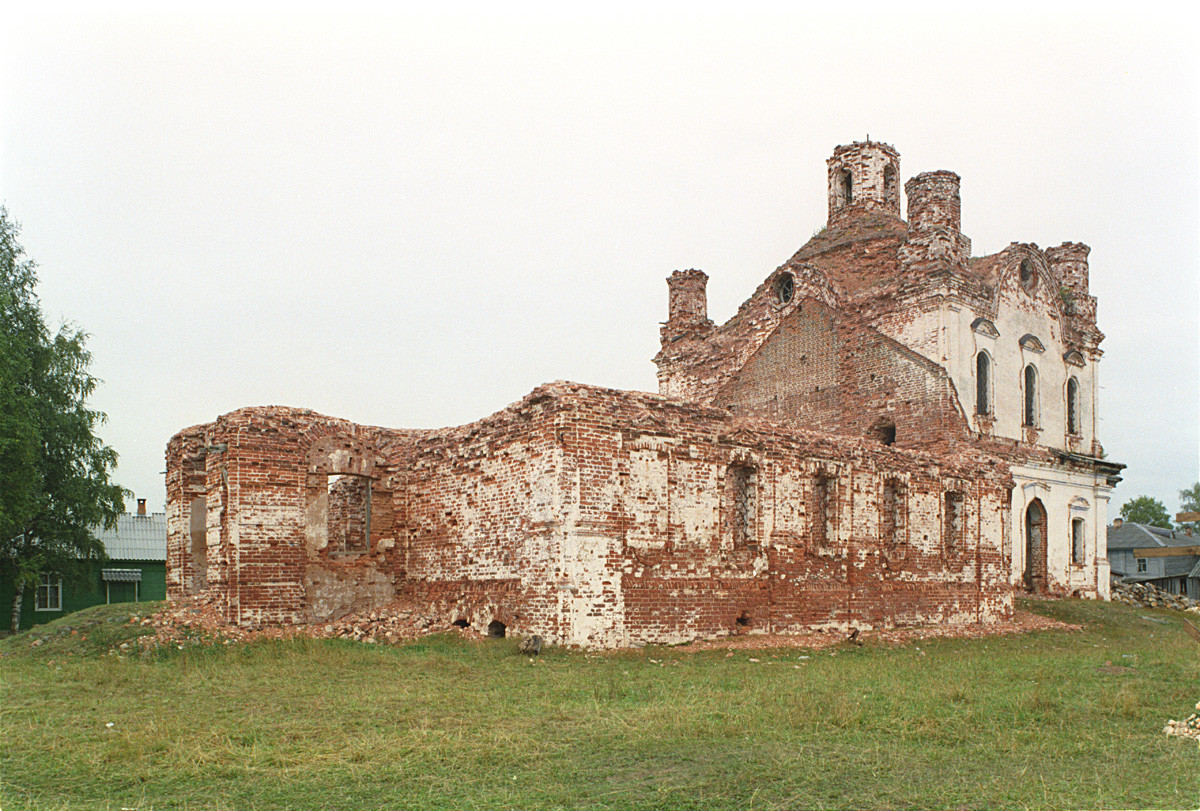 The Intercession Church was consecrated for parish services in 2008 and has become a landmark for cruise ships that ply the Neva River during the summer. The church is complemented by a superb octagonal bell tower originally built in the 1670s for the village of Lower Uftyuga and reconstructed from measurements done in 1884 by Vladimir Suslov, a pioneer in the study of Russian wooden architecture. The park territory surrounding the Intercession Church is enclosed by a wooden wall copied from an 18th-cenury original at Lyadiny Pogost near Kargopol. 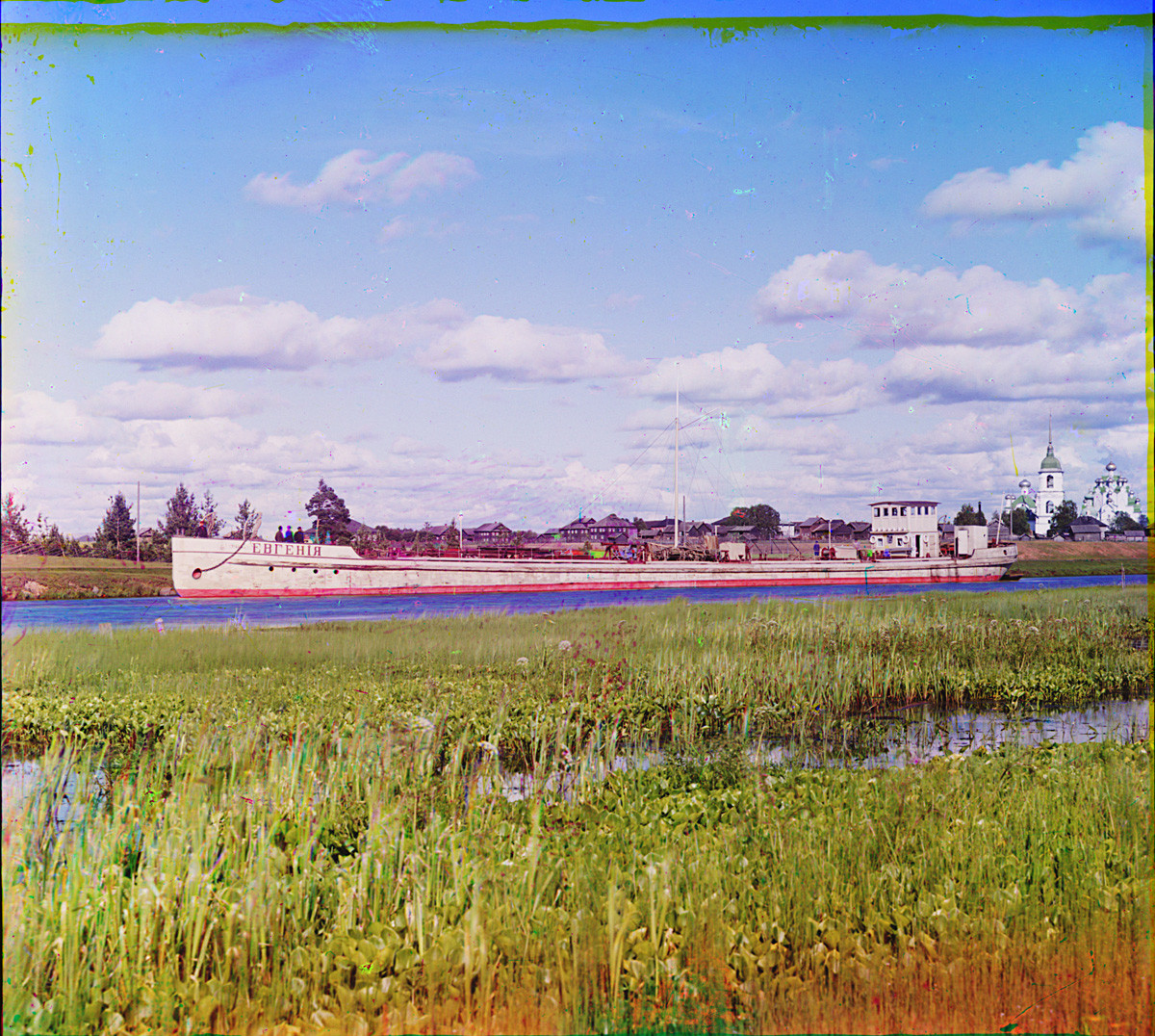 Finally, it should be noted that the Intercession Church ensemble at Akhimovo also appears in the background of Prokudin-Gorsky’s photograph on the Vytegra River of the shallow-draft petroleum barge “Evgeniya,” owned by the Nobel Brothers Company, a major producer of petroleum at Baku on the Caspian Sea. Thus, Prokudin-Gorsky’s photography succeeded yet again in combining traditional Russian culture with the modernization of the Russian Empire. 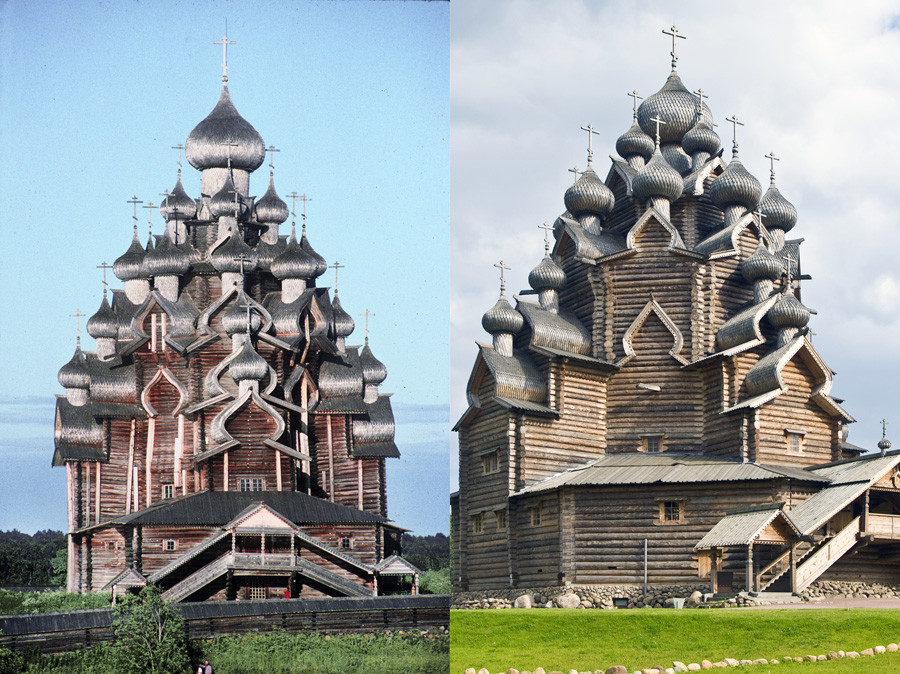