10 most interesting sculptures in the Moscow metro 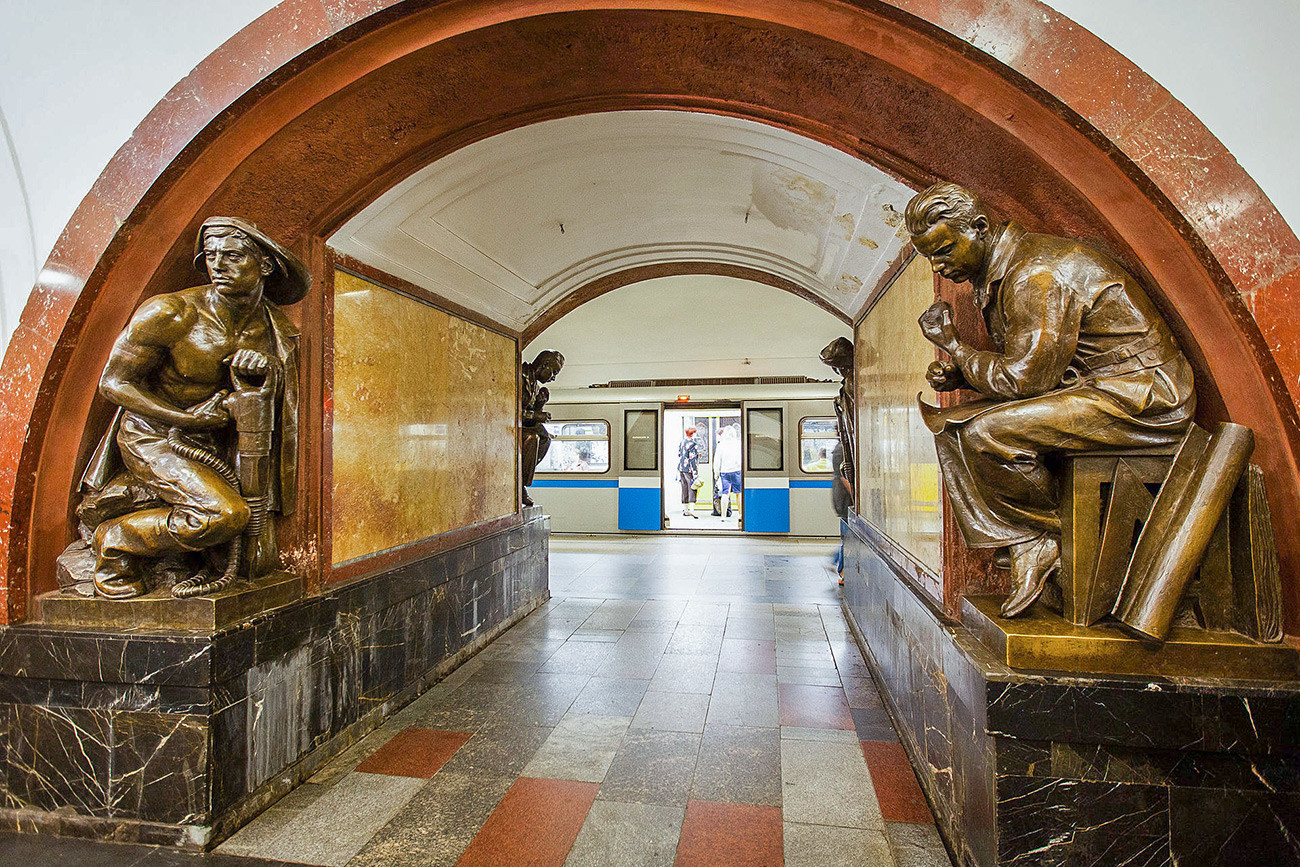 Ploshchad Revolyutsii station ('Square of the Revolution') is especially famous for its sculptures. There are 76 bronze statues that feature Soviet people: workers, peasants, soldiers, athletes and sailors - every social group that took part in the 1917 Revolution on the side of the victorious Bolsheviks. 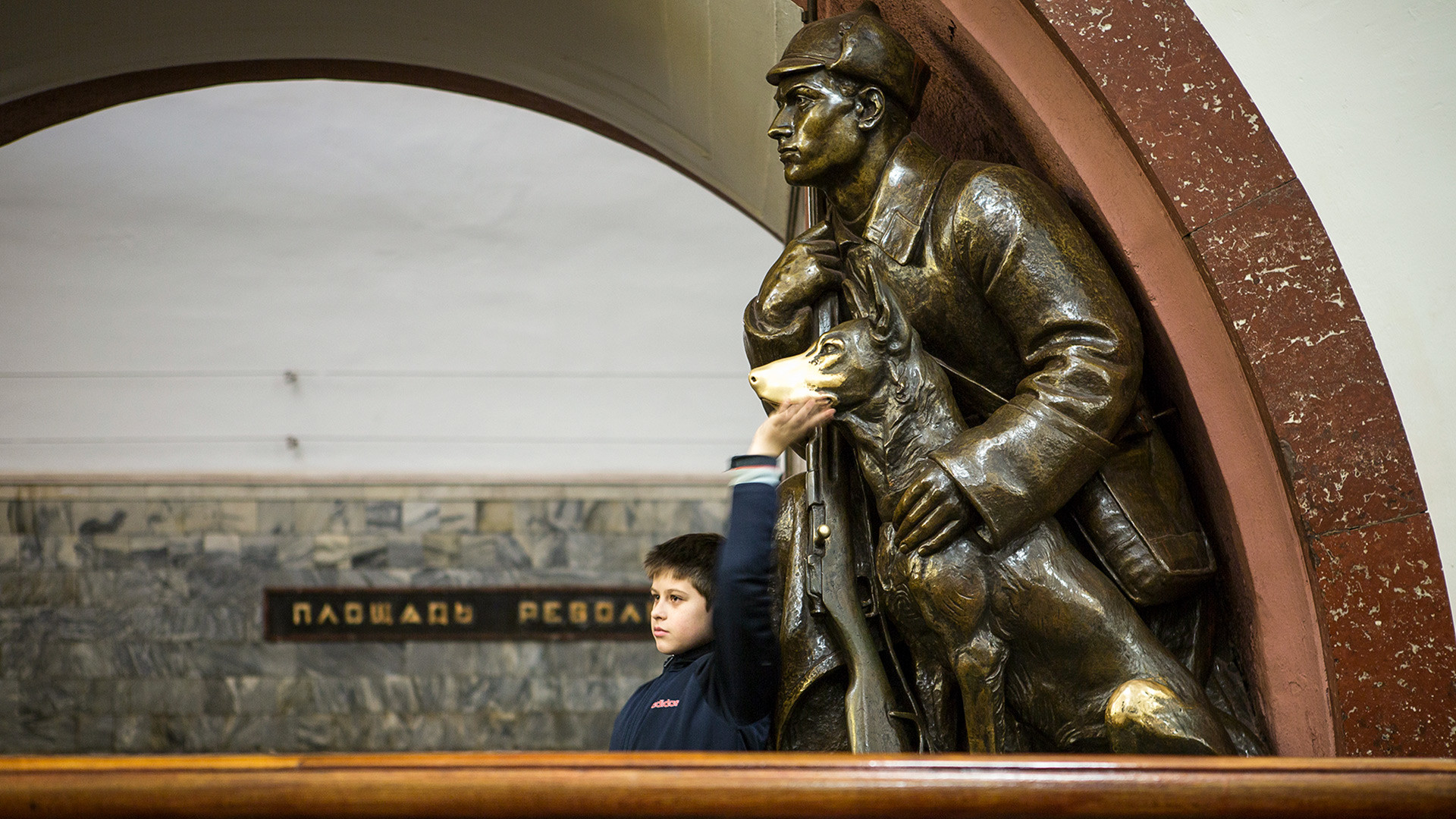 There is a legend that Stalin liked the bronze sculptures very much, saying they look alive. The most popular statue is a border guard sitting with a guard dog. The animal's face is shiny bronze because Muscovites believe that touching the dog's nose brings luck. 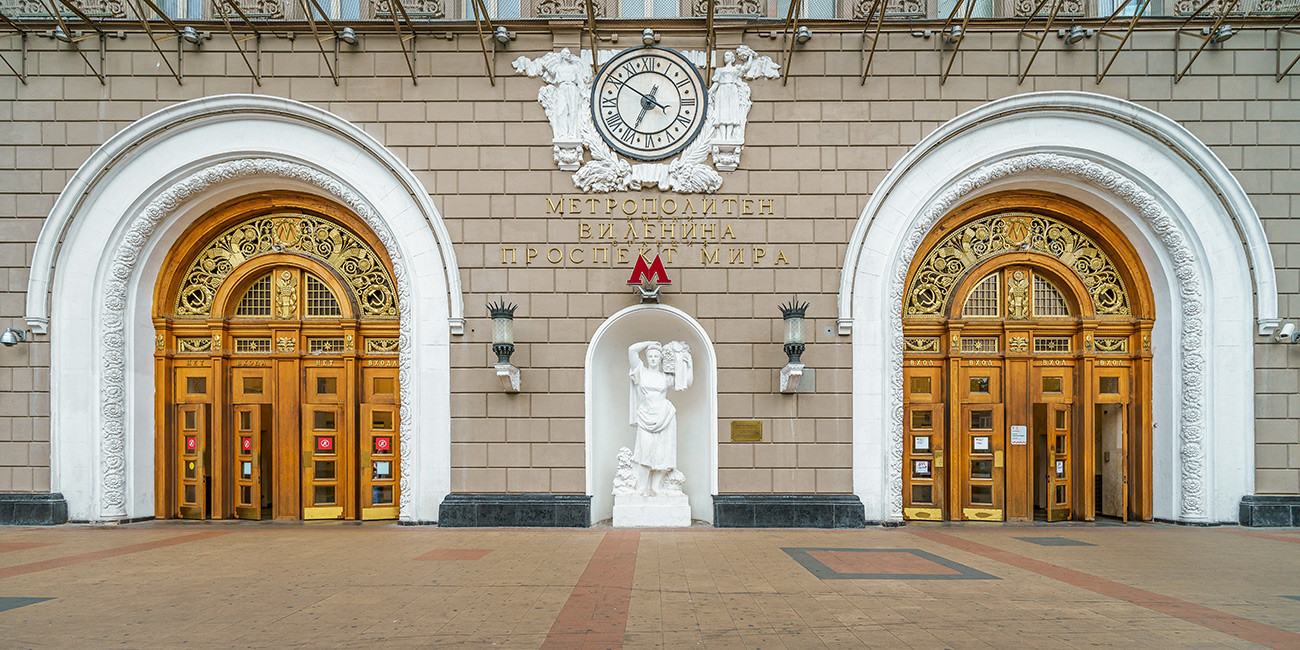 The entrance to the Prospekt Mira station on the Circle Line is decorated with a sculpture that symbolizes fertility because the station's first name was 'Botanical garden'. Unfortunately, the modern-day statue is a replica made in 2016 because the original hasn't been preserved to the present day. 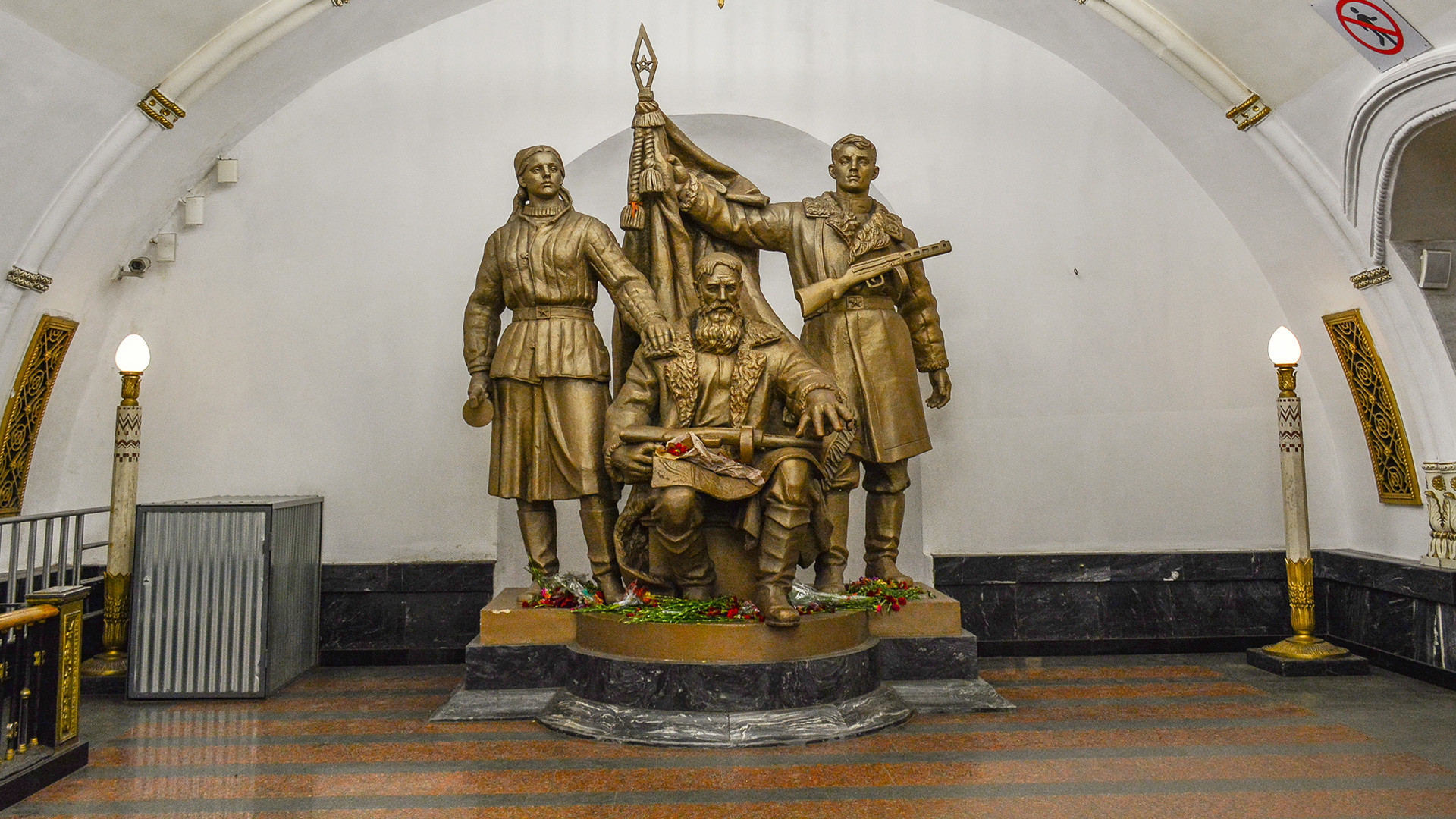 The transfer corridor between the two Belorusskaya stations on the Circle and Zamoskvoretskaya lines is decorated with Belorussian motifs since Belarus was one of the Soviet republics. An impressive composition, 'Belorussian partisans' was made in 1952 by sculptor Matvei Manizer and it commemorates the brave men and women who defended their Motherland in Belorussian forests during World War II. 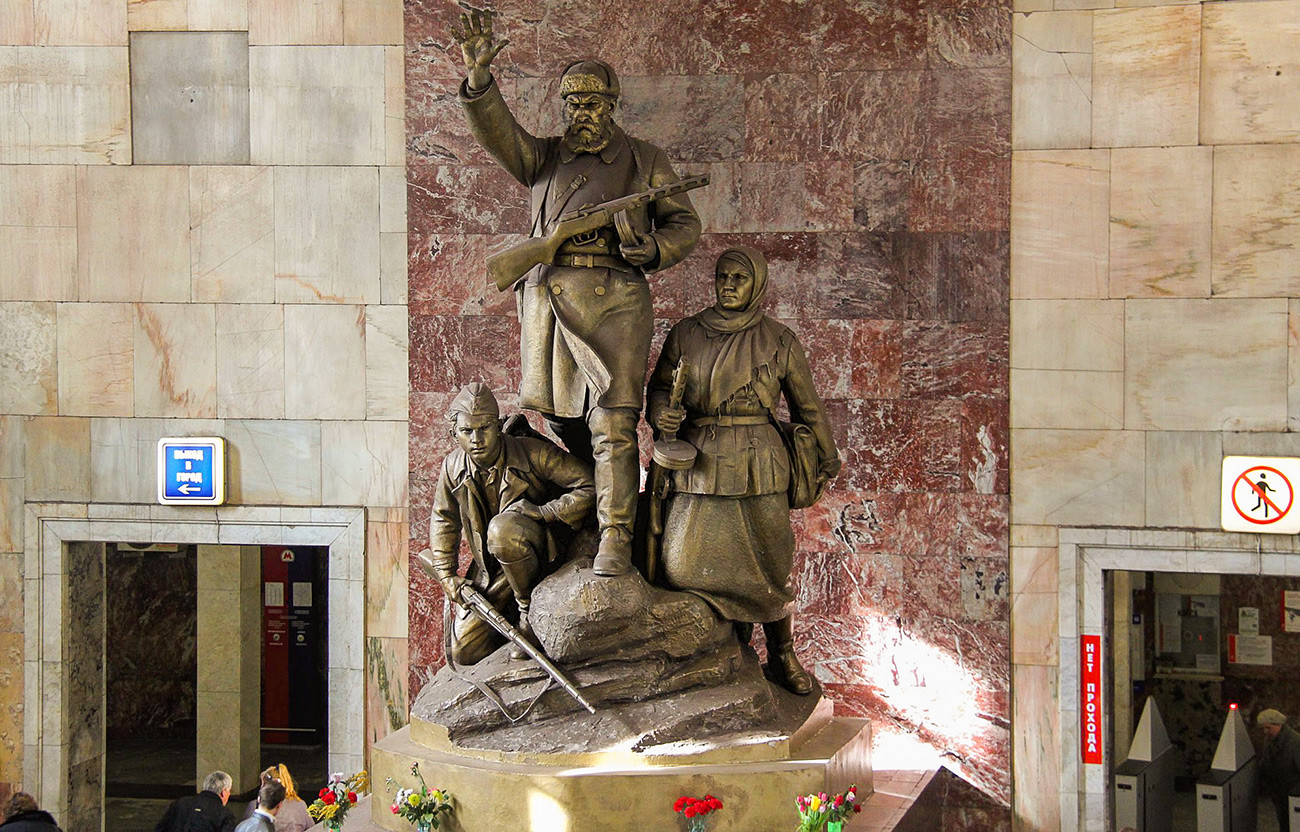 The station name hints that we are dealing with partisans here.  A huge sculpture of three Soviet partisans adorns the station entrance.

Inside are monuments to famous World War II heroes, such as Zoya Kosmodemyanskaya, a young woman who is said to have refused to reveal the partisans’ secrets, and so was brutally tortured and killed by the Nazis. 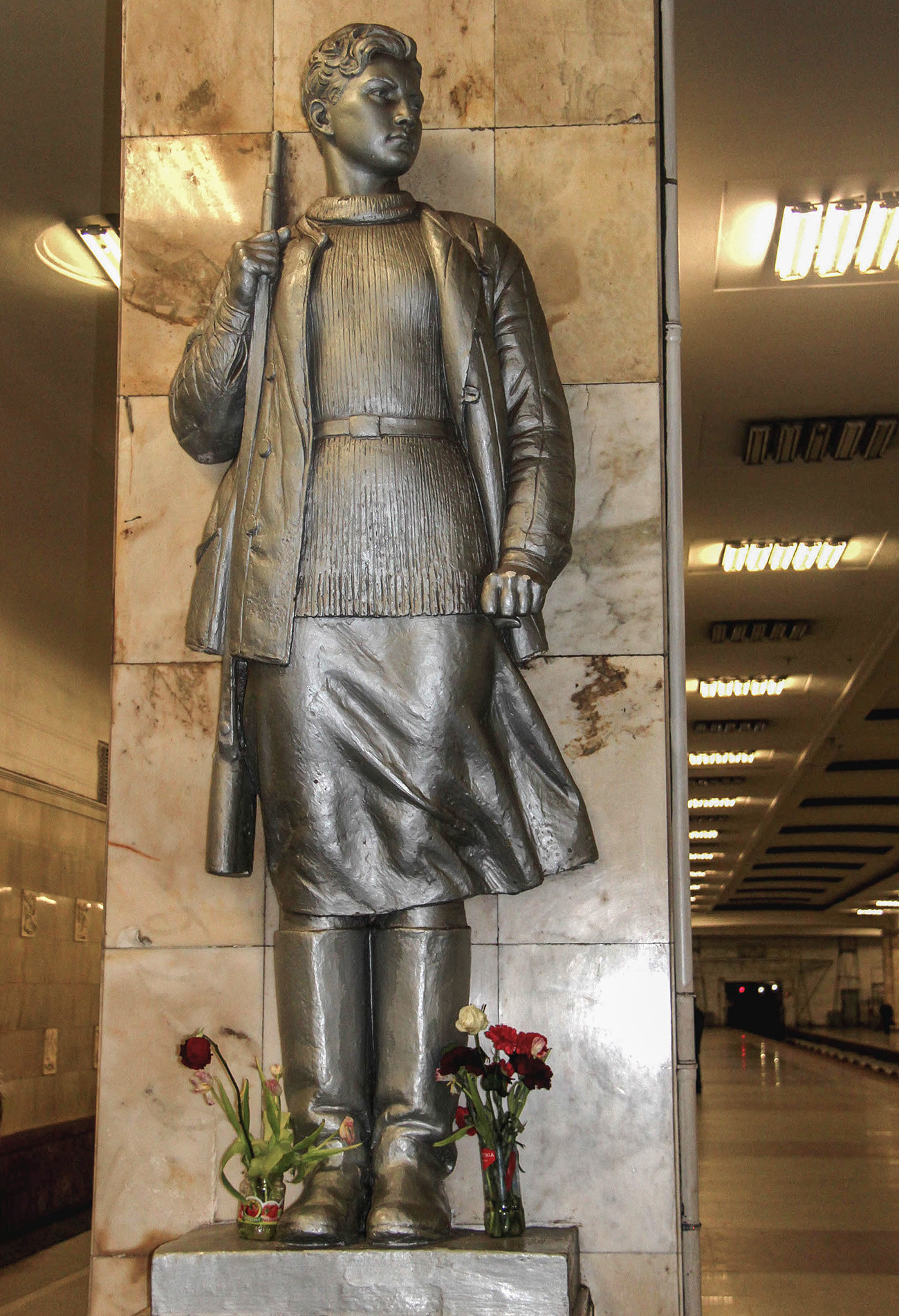 Matvei Kuzmin is another hero commemorated in the station. He was hired as a forest guide by the Nazis, but deliberately mislead them, eventually taking them right into the path of Soviet artillery. The Nazis killed him for this. 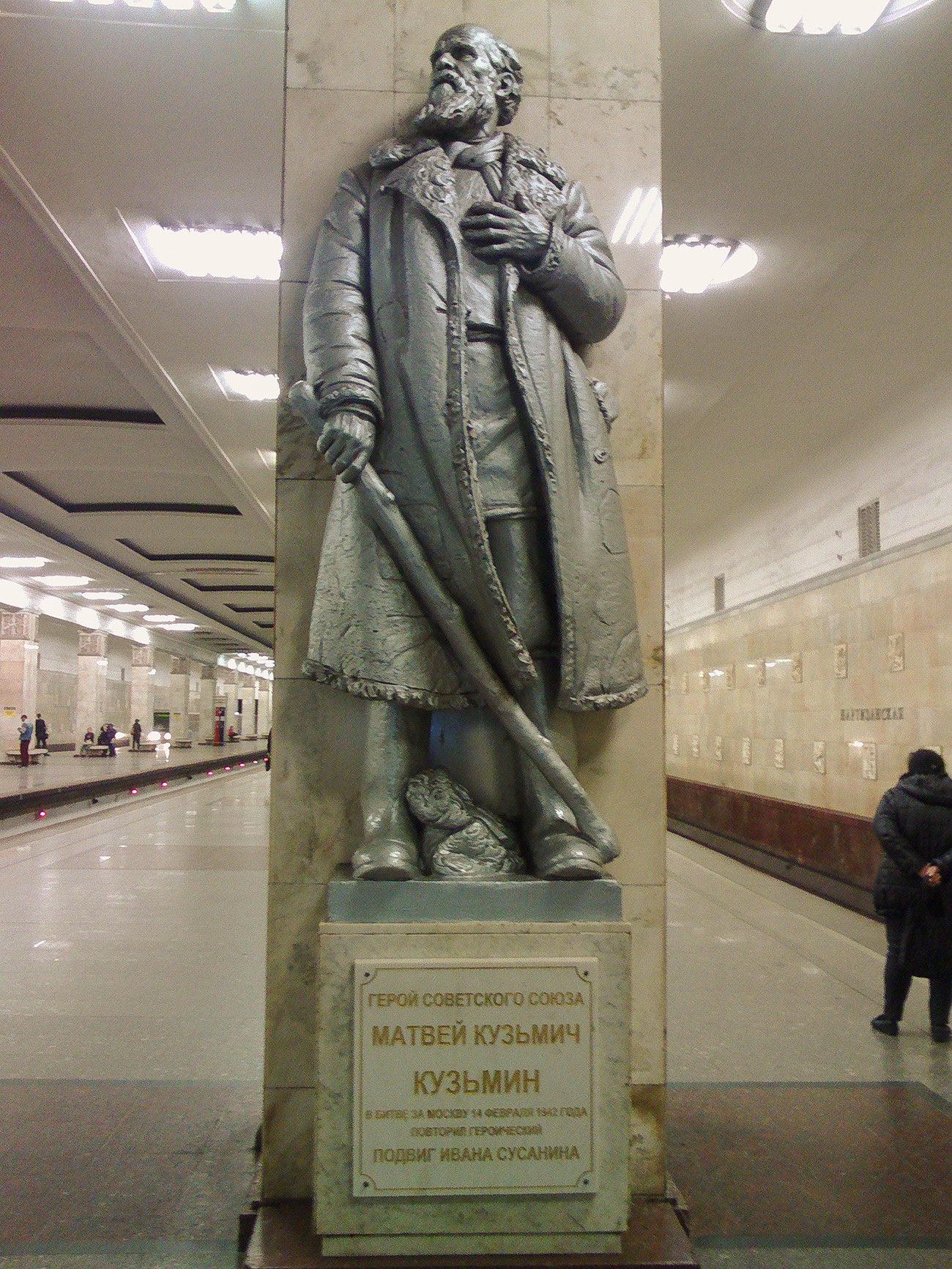 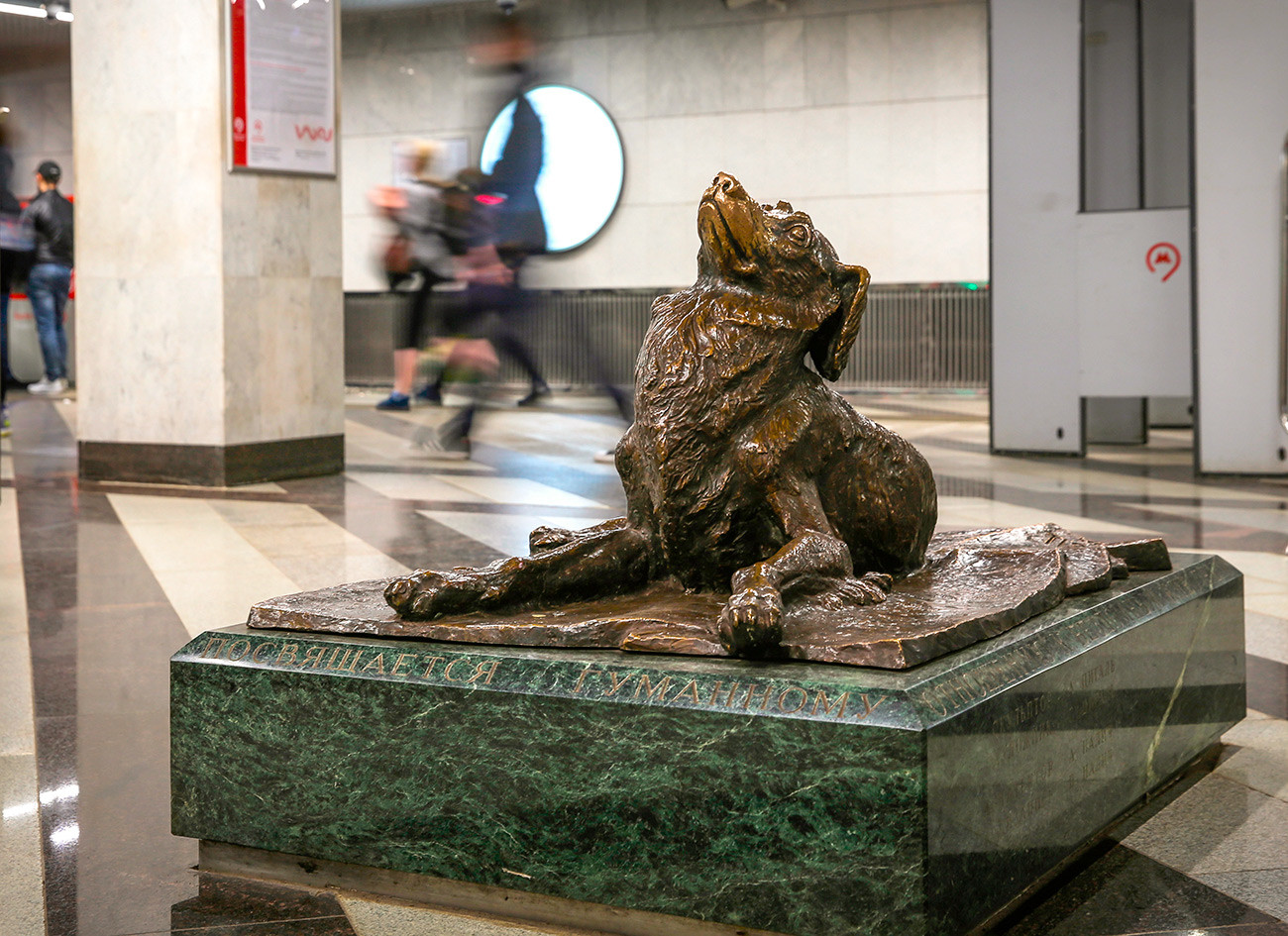 This is a rather new sculpture, installed in 2007. It’s dedicated to a stray dog, a local pet that was fed by station workers and staff in nearby shops. One day, however, the poor dog was killed on this very spot by a 21-year-old model. 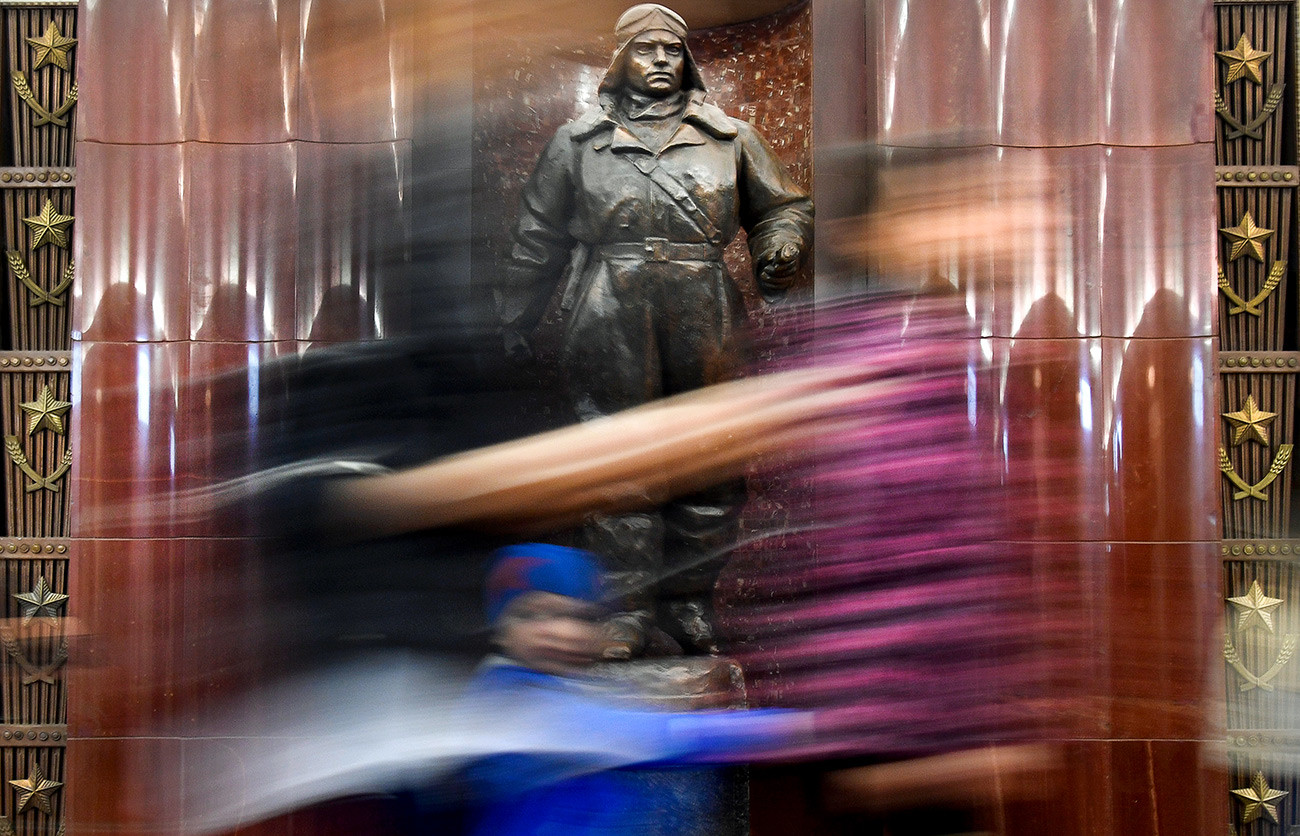 This metro station was opened during World War II, and features the great feats that Soviet people accomplished both on the front lines and behind the lines. Eight bronze statues feature workers, engineers, aviators, Red Army soldiers and Moscow metro builders. 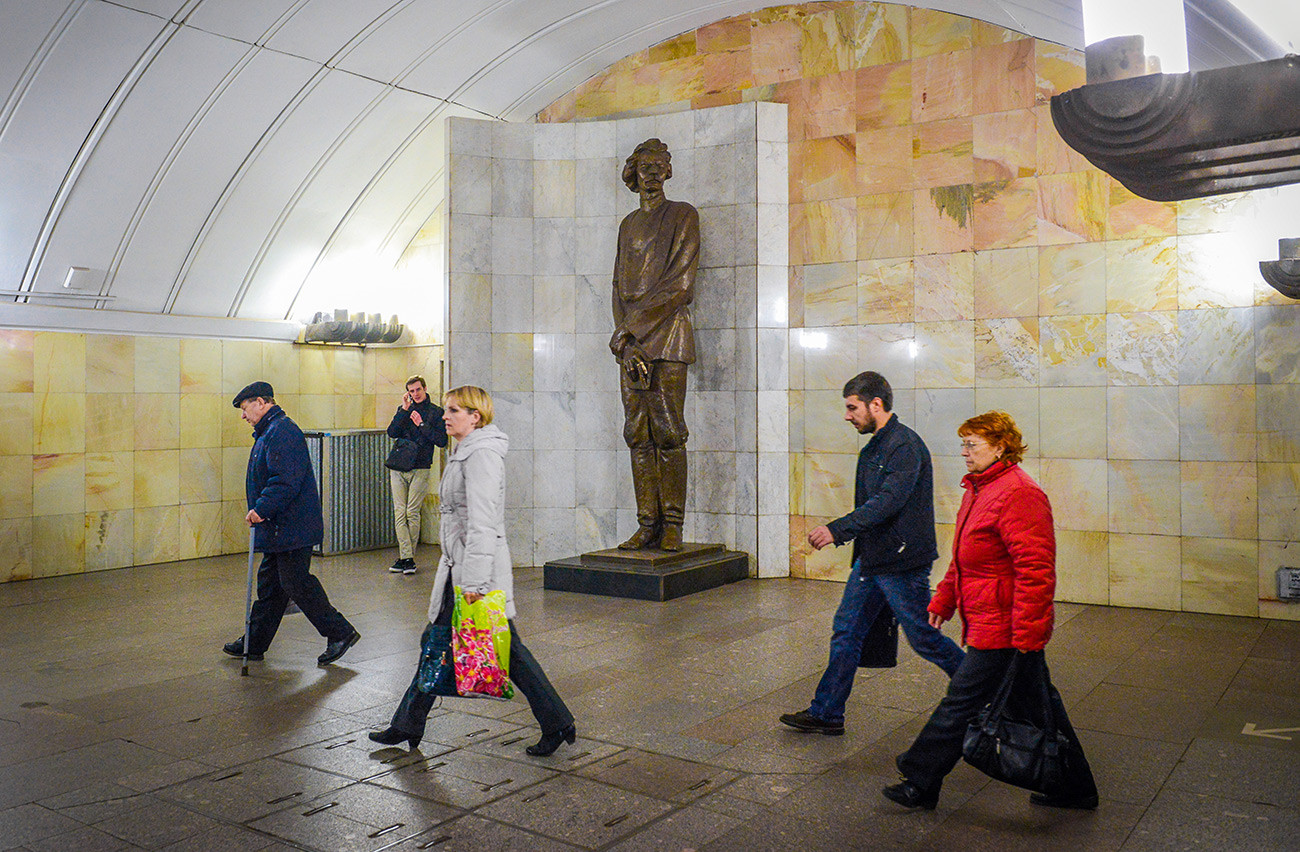 The space between Tverskaya and Chekhovskaya stations is decorated with a huge monument to Maxim Gorky, the leading Soviet proletarian writer. Why not Chekhov, you might ask? Because Tverskaya station (and Tverskaya Street) in central Moscow were both named in Gorky’s honor until Perestroika when the names were changed.

Here are the reasons why Gorky is so great.

8. Romulus and Remus at Rimskaya 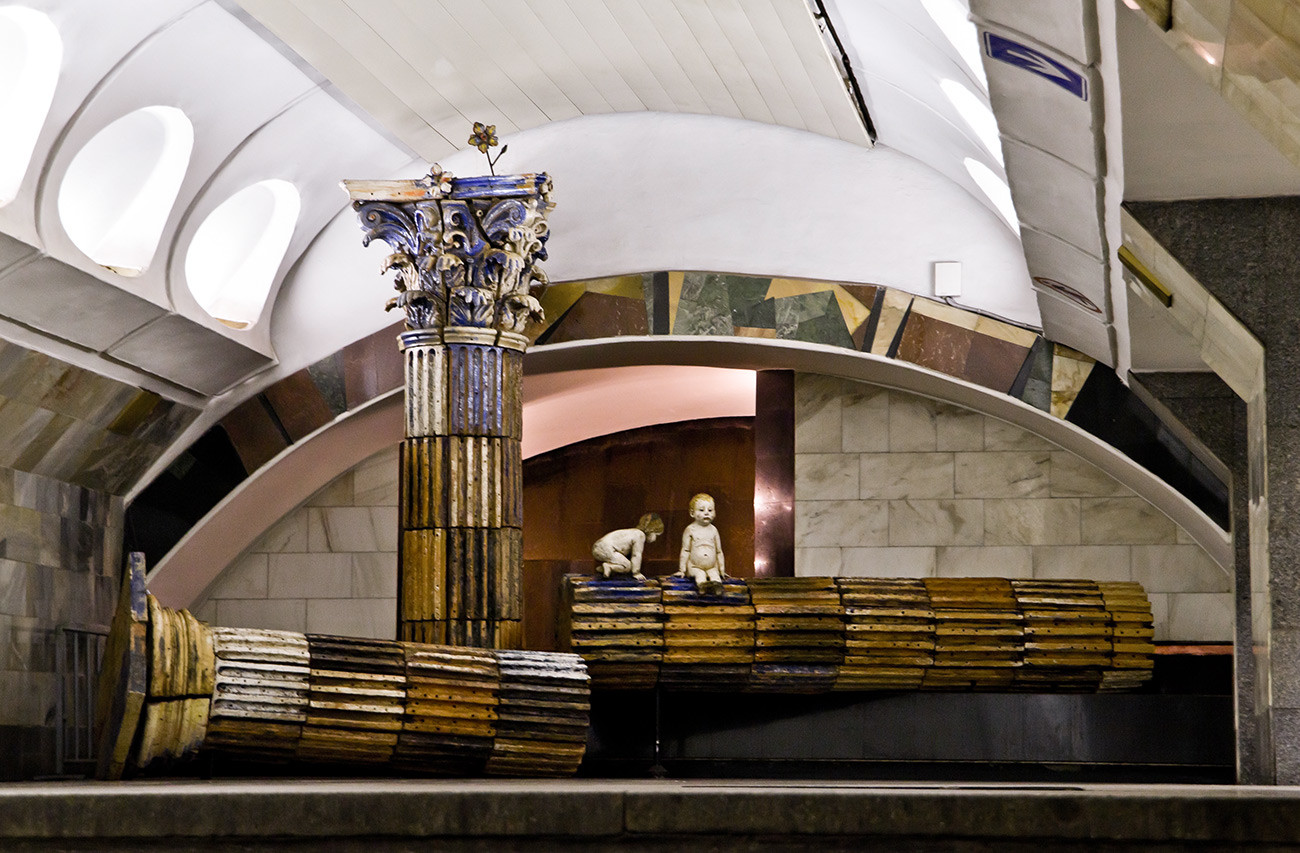 This station is relatively new, opened in 1995, and that’s why it probably doesn’t have any Soviet themes. Rimskaya literally means ‘dedicated to Rome’ and has a thematic sculpture composition. Two boys sit on ruined antique columns, and they are the legendary founders of Rome: Romulus and Remus. Muscovites, however, find it a little creepy.

9. The Virgin Mary with Child at Rimskaya 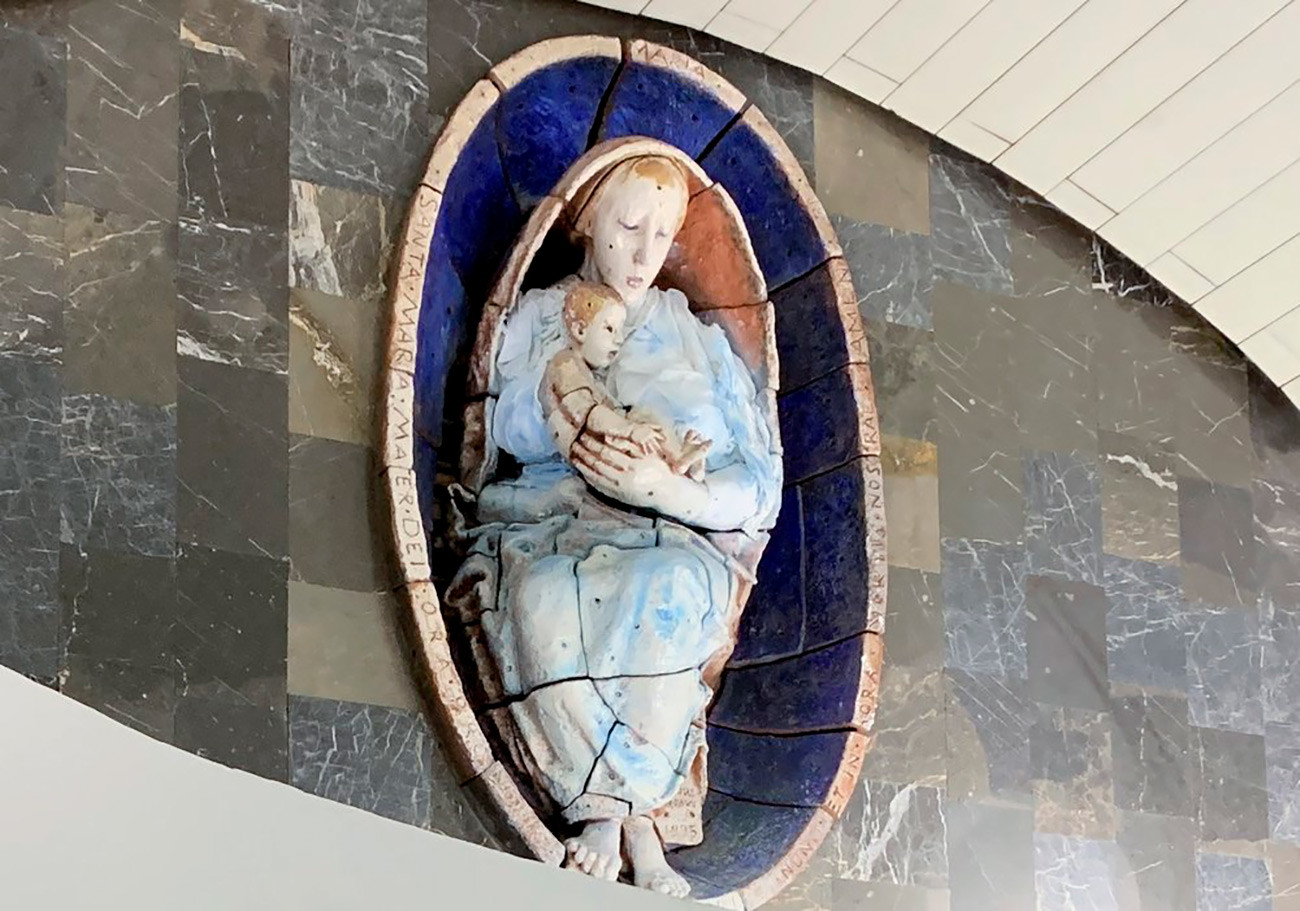 The other side of the same station features a sculpture of the Virgin Mary with Child. Interestingly it decorates the transfer elevator to Ploshchad Ilyicha station (Station of Vladimir Lenin), which just shows that we can’t avoid  Soviet era themes. 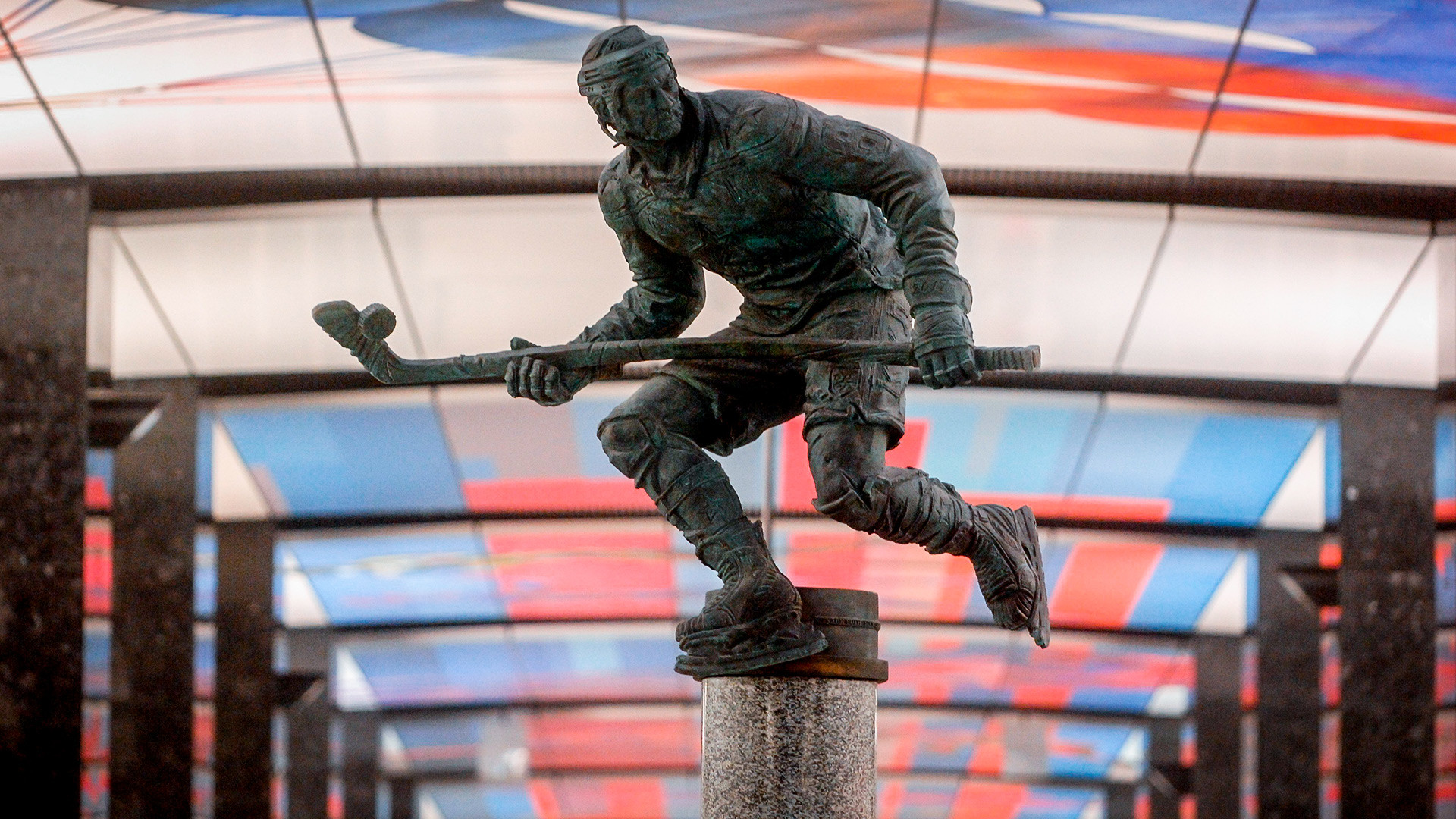 The new station that opened in 2018 next to the recently-built CSKA stadium is dedicated to the sport club, CSKA (Armed Forces Sports Society). Thus, it has statues of athletes from four different types of sport: a skier, a hockey player, a basketball player, and a soccer player. All the sculptures were inspired by famous athletes.