Lake Baikal in winter: You come for stunning pictures & end up leaving part of your soul 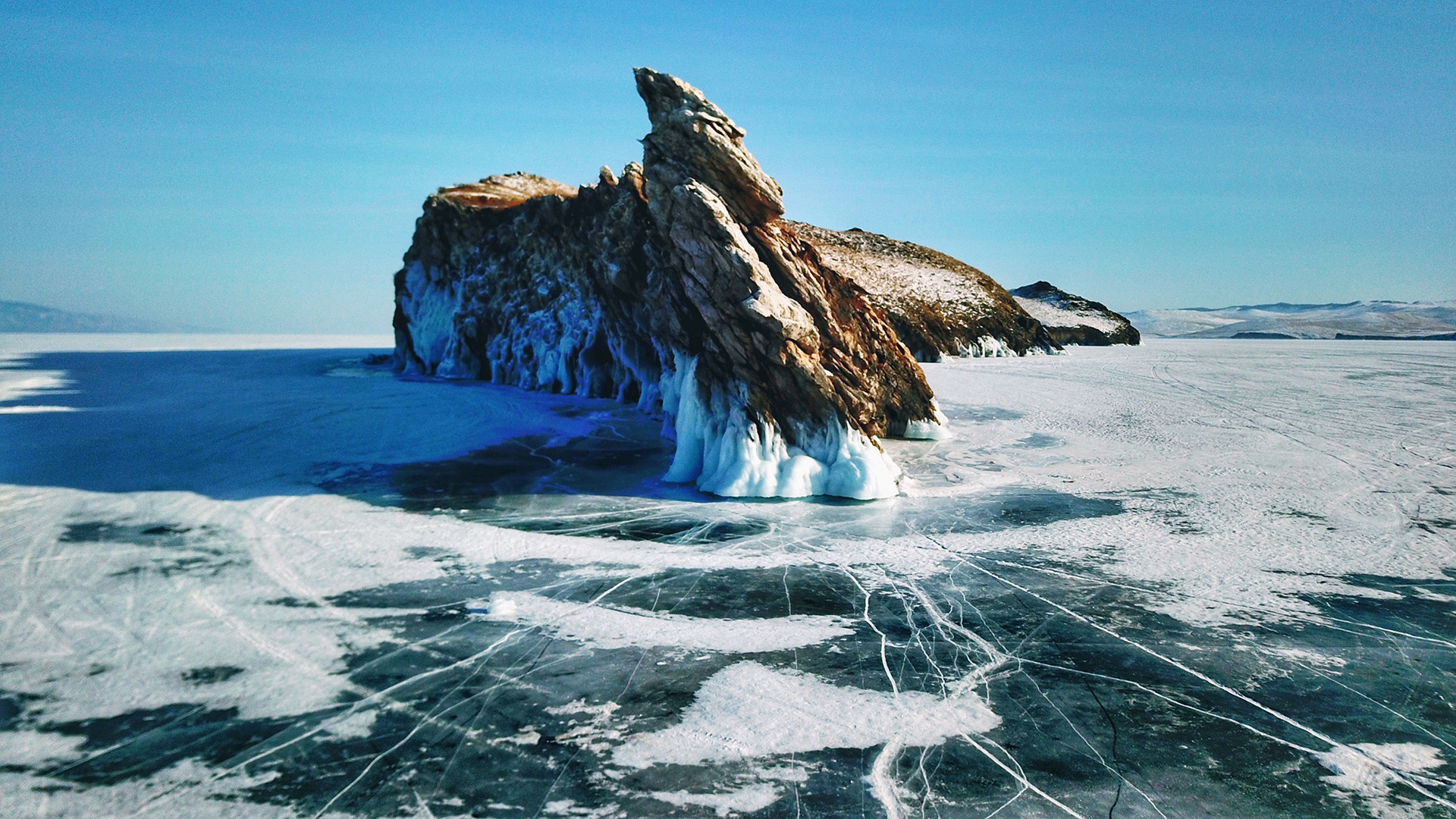 Vsevolod Pulya
The water in Lake Baikal freezes in bizarre shapes, turning its shores, islands and rocks into a set for a movie in a galaxy far, far away.

“Here, a shaman fell through the ice in his UAZ jeep. That happened last year, on December 30. He was just six meters from the shore. When you fall through the ice so suddenly, you don’t have time to open the door, because the water presses it in. And because of the state of shock, not everyone manages to break the glass.” Andrei (name changed) recalls this while looking straight ahead, without taking his eye off the road and both hands on the steering wheel. 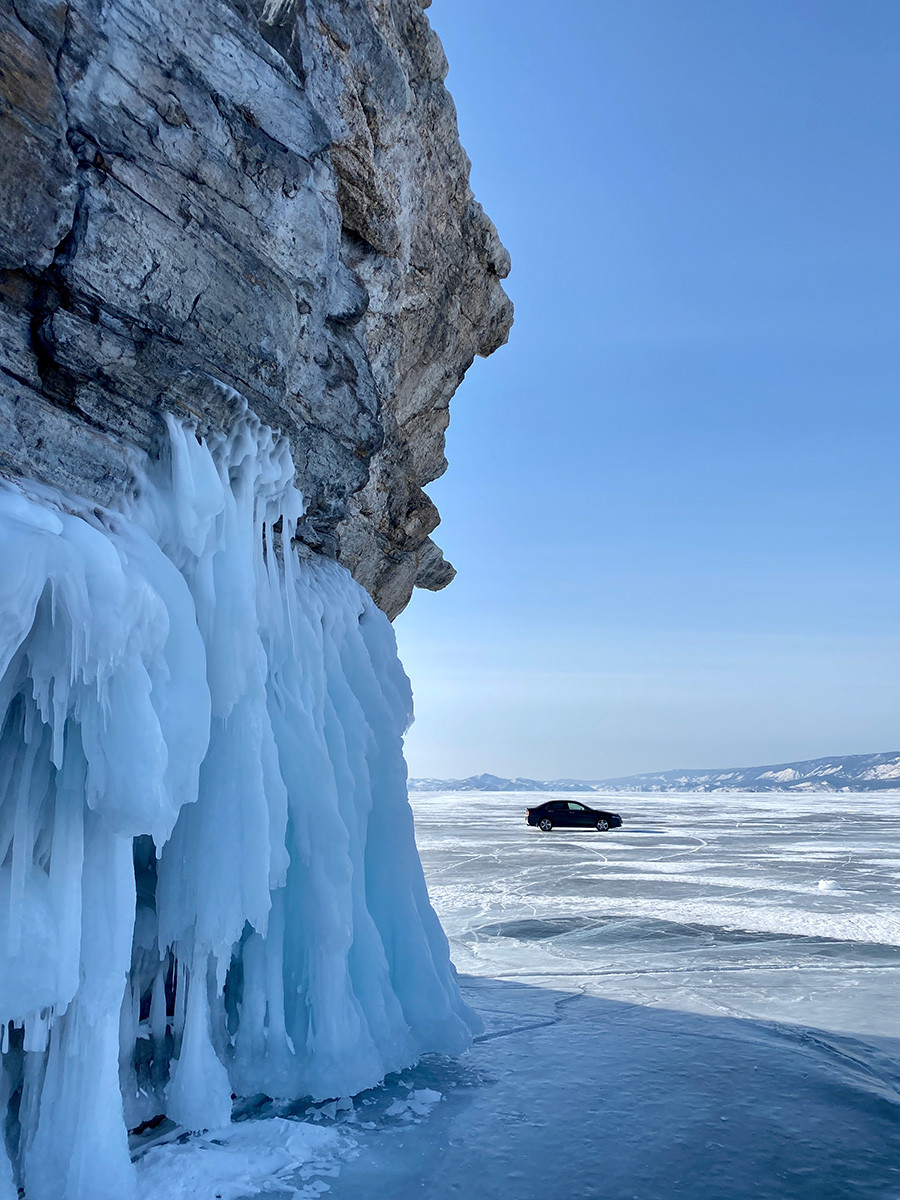 We have been driving over the frozen Lake Baikal for about 20 minutes, looking for a spot where our low Japanese sedan could climb onto the shore of Olkhon Island, the largest within the lake. It is already February, but officially, the ice road is expected to open only in a couple of days’ time: they have started marking the road with posts, but until they have finished, cars are not allowed on the ice. 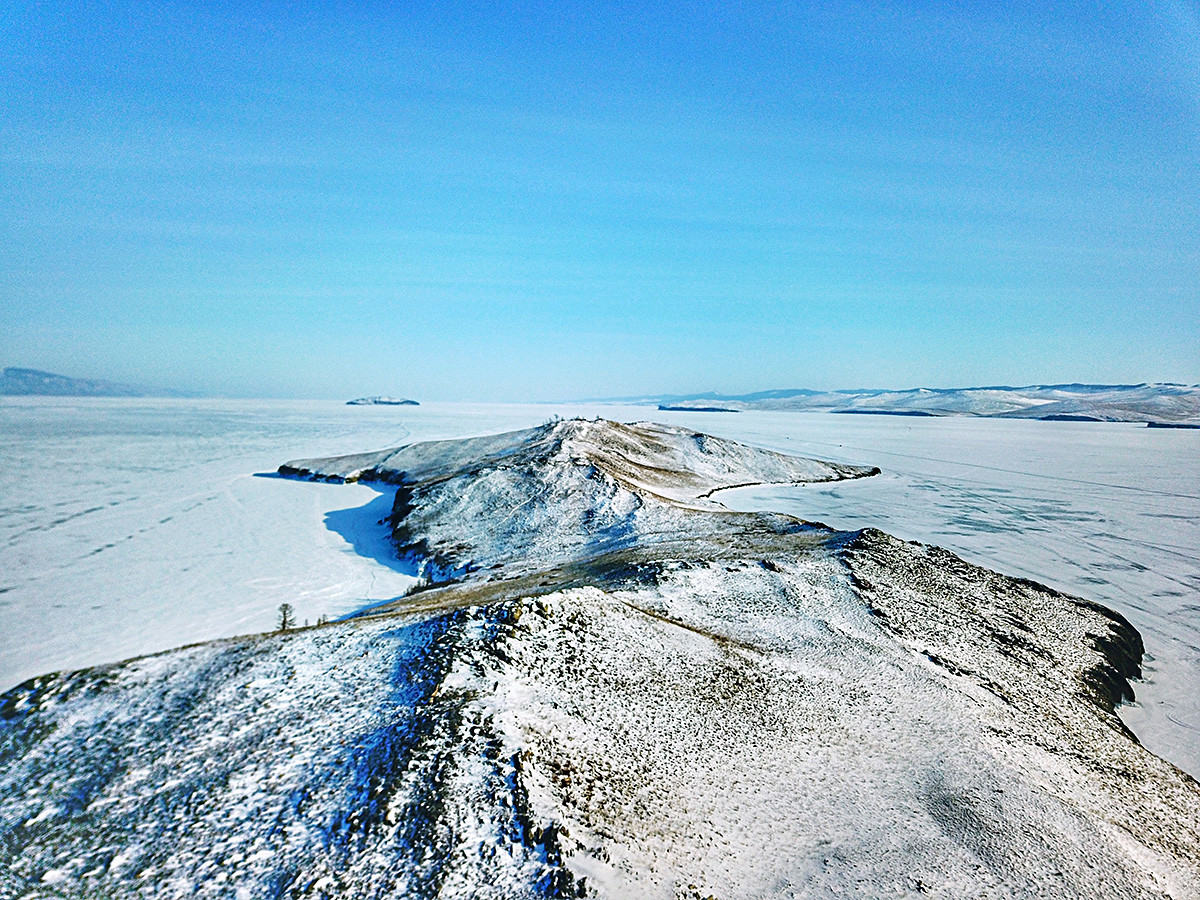 Andrei's father is a local Buryat, the biggest indigenuous group in Siberia, who was born and raised on Olkhon Island. And so, Andrei’s spent every summer on the island and knows everything and everyone here. That’s why when we leave the shore of “the mainland”, we sneakily drive around some concrete barriers and follow a large orange septic tank truck: it’s heavy, so the driver must surely know the safe route. Houses built in the Baikal water protection zone are not allowed to have their own septic tank or water treatment facilities, so these orange trucks are a common sight on the frozen lake. 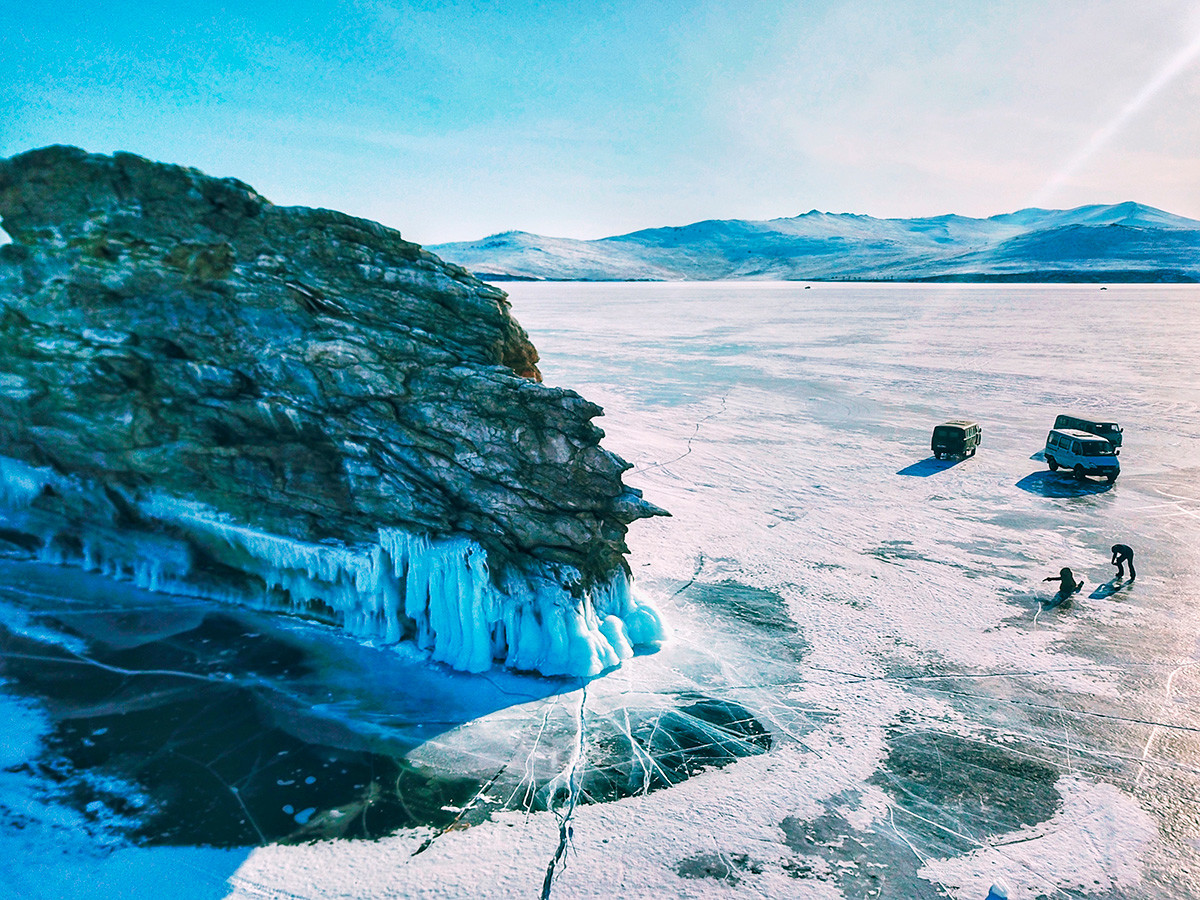 Rare drivers will bring you from one side of Baikal to another. This is the Dragon Cape on Ogoy island, one of the most picturesque places of the frozen Lake Baikal

Still, driving on the ice is a bit scary. Every now and then, we come across long cracks, which literally send the car up into the air. Off the east side of the island, traffic is banned altogether: the ice is simply too thin. The direct route from Ulan-Ude, the capital of Buryatia, to Olkhon Island is only 200 km long (124 mi.). But because of the thin ice, we chose a longer route along the southern shore of the lake and through Irkutsk - 750 km (466 mi.).

One could say that I have fallen victim to a global Instagram hysteria. The idea of going to the famous lake in the off-season lodged in my head after I saw a series of stunning pictures published by photographers I know. And I am not the only one. Andrei says that just today, his friends, who work as local guides, took a Thai blogger, who has 10 million followers, to the north of Olkhon Island. 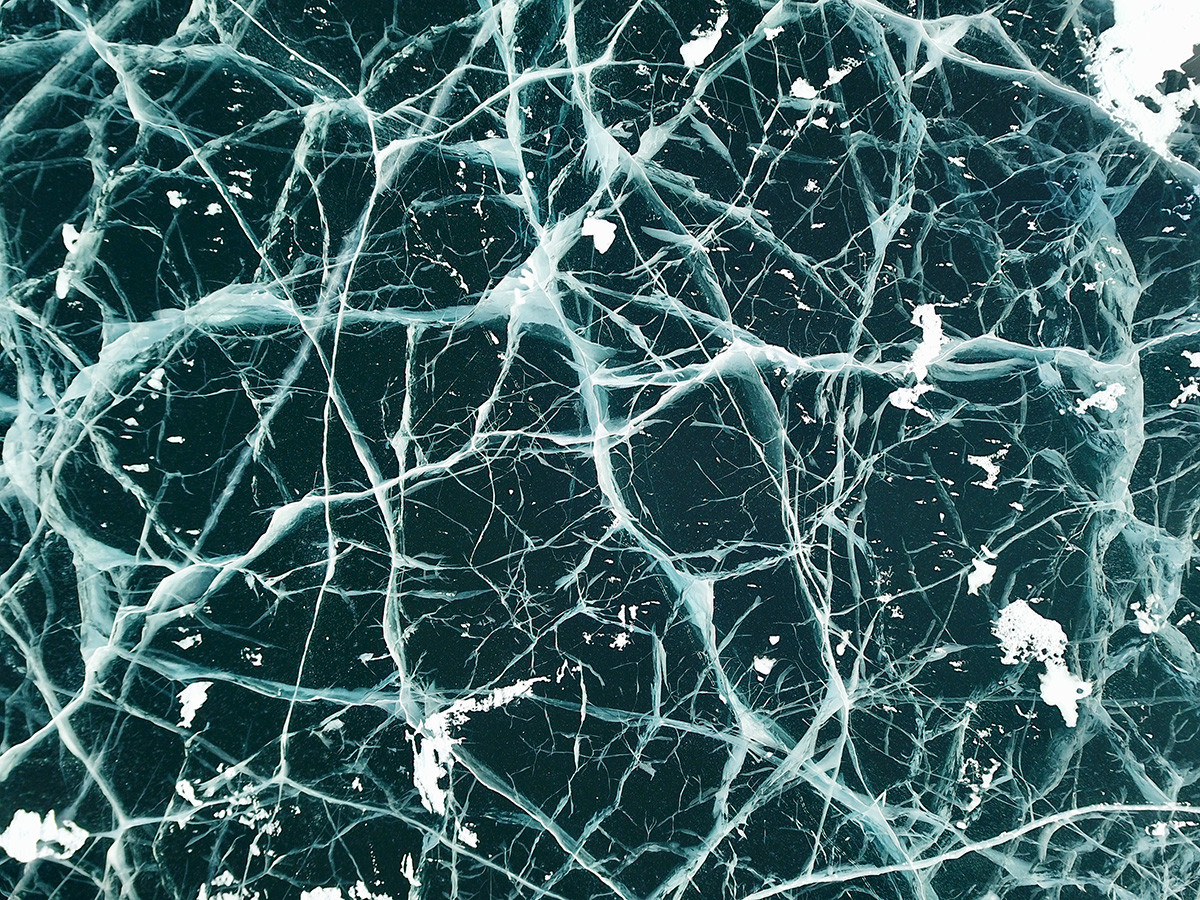 Ice is very different from year to year. It was hard to find that clean piece in 2020

If you, too, have been bitten by the highly infectious Instagram hysteria and are thinking of visiting Lake Baikal in winter, it’s better to fly to Irkutsk than to take the exhausting “scenic route” by car from Ulan-Ude: it’s closer to Moscow and there are more flights, so prices are lower. The journey from Irkutsk to the crossing points in the villages of Sakhyurta or Kurkut takes just three to four hours by car or bus. The road is new and quite picturesque; now and then, you come across pyramids made of huge boulders on its side, too heavy for any human being to move. “Surely, the bulldozer drivers who were building the road were just having fun,” Andrei theorizes. 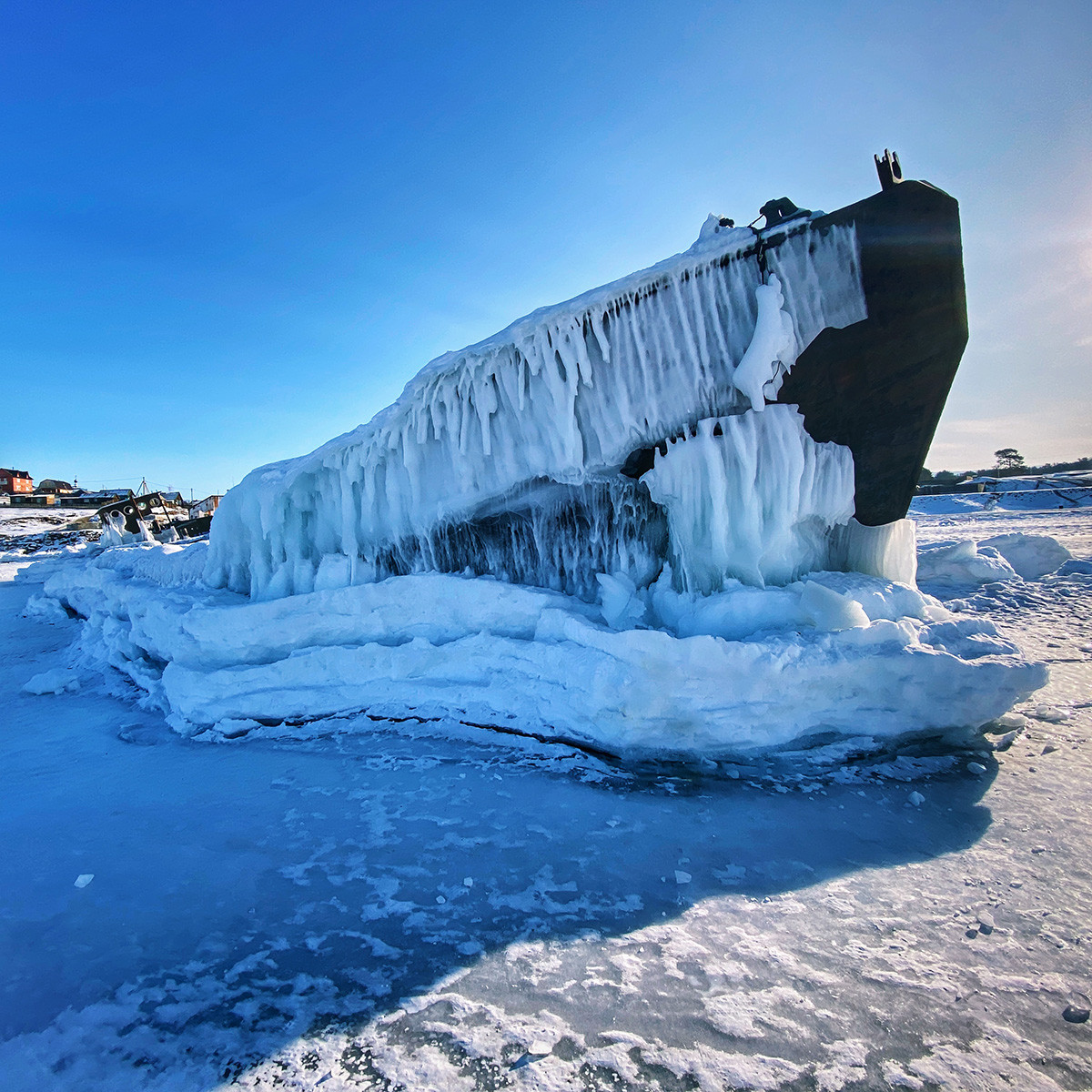 A transfer from the shore is best arranged in advance, through a travel company or the owners of your accommodation on Olkhon Island. Every other building on the island is a guest house. There’s even an upscale hotel located right on the shore: it has several identical log cabins and a neat beach. There is even a lounge area with wooden sunbeds. But there is absolutely no sign of life here and no smoke coming from any of the chimneys. “They built it with violations, having seized the land illegally. In theory, it should have already been pulled down, but they must still be negotiating with the authorities - it’s a pity to demolish such a beautiful property,” Andrei explains. 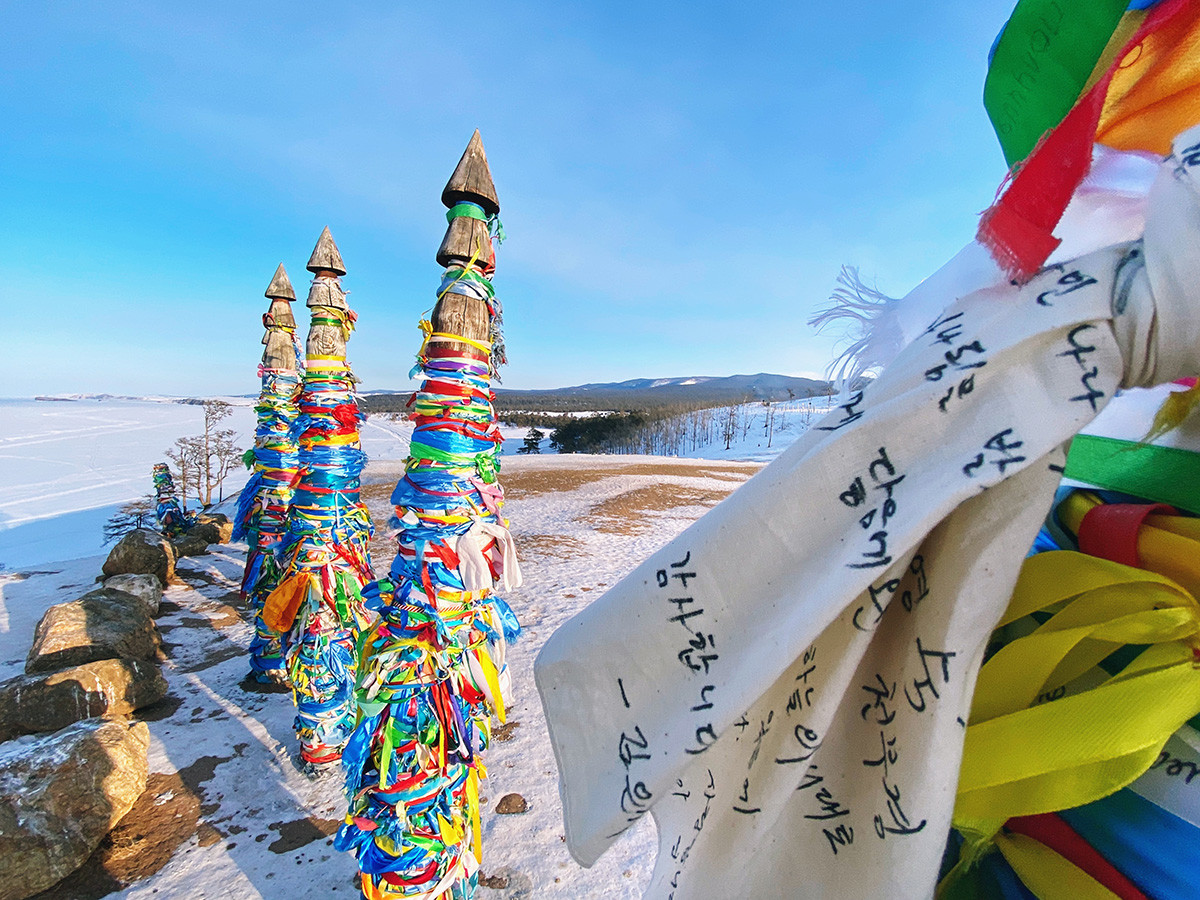 Olkhon Island as well as other local rocks are considered sacred places among buddhists and shamans. Pictured: Khata, ceremonial scarfs in Buddhism, on Shamanka rock.

At last, we find the landmark – a boat lying on its side near the shore – indicating the spot where you can safely drive onto the island. Back on solid ground, we reach our accommodation: small cottages for two to three people each, with a couple of electric heaters inside that are so hot it feels like inside a sauna. In winter, accommodation is cheap in comparison to summer: in Khuzhir, the main village on the island, a double room or a whole house can be rented for 2,000 to 4,000 rubles ($32-64) a day (including breakfast). From 6,000 rubles ($96), you have a choice of some “premium” options. 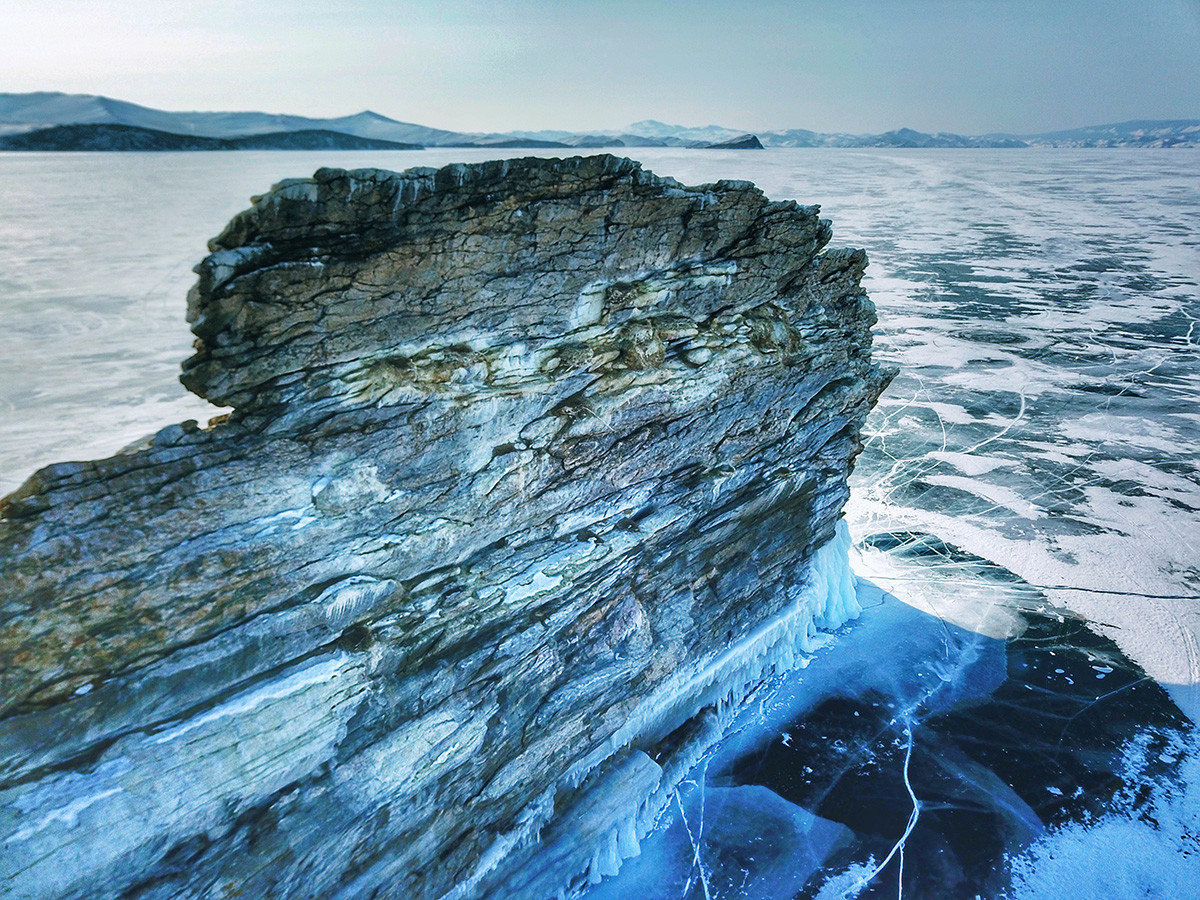 In most cases, the price includes breakfast, and for a bit of extra, you can negotiate a half-board deal. Food can be bought from a large supermarket in the center of Khuzhir called Dobry (it stocks practically everything, including Belgian beer, albeit at twice the price compared with Irkutsk) or from any of the small grocery stores that are interspersed with names like Magic Souvenirs or Baikal Amulets.

The following morning, we set out in pursuit of the main course on the Baikal winter menu – the ice. For this trip, a sedan will not do, so we swap it for a Sobol minivan that belongs to Andrei's friend Igor, who works as a local guide. Sobols are the most common winter transport here: they have enough ground clearance, can accommodate up to six people, are comfortable, warm and cheap (additionally, the average price for a group day trip is just 1,000 rubles [$17] per person). 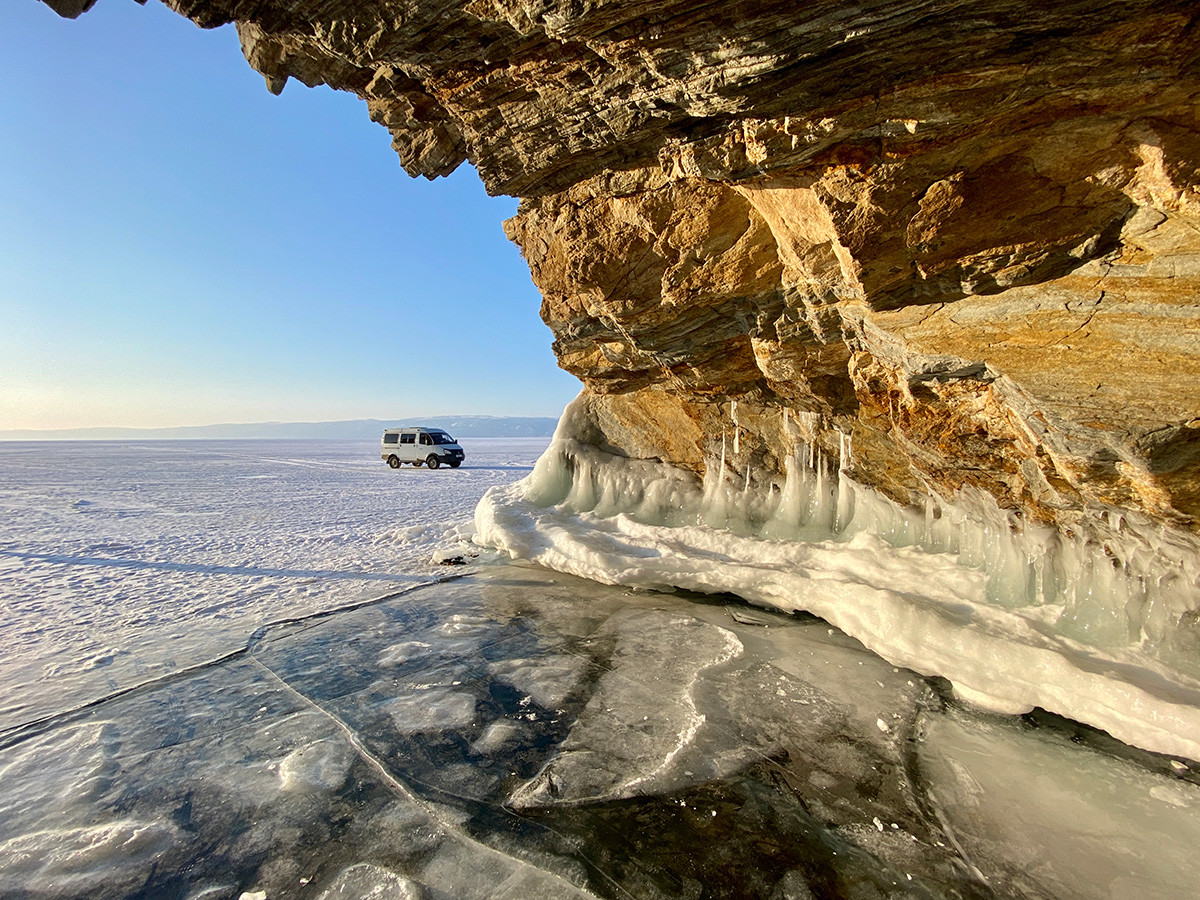 And the magic begins. We drive from one Baikal island to another, approaching the rocks and marveling at the variety of sokui, the icy edges that cover the Baikal rocks. Frozen spray, icy waves, nearly fallen ice drops, transparent, sparkling and milky white masses - we find ourselves at an outdoor exhibition of pretty much every type of ice that probably exists in the world.

At the Three Brothers Cape, there are clusters of arrow-like icicles hanging over us. On the Sleeping Lion rock, an actual ice “throne” has formed. The smooth surface of the lake, cut with deep cracks, suddenly gives way to a whole field of hummocks - ice floes breaking and rising in different directions and angles.

Ice at the Three Brothers Cape

This year, however, smooth transparent ice is hard to find: due to heavy snowfall, the wind did not have time to blow everything away. That’s why it takes a while to find those bits of ice with frozen methane bubbles or areas as clear a mirror. We get sudden help from some Chinese tourists: in the distance, we see multi-colored smoke from flares, and as we move closer, we find ourselves in the midst of an Instagram photo shoot, as Chinese women, having taken off their fur coats, are being filmed in their low-cut evening dresses on the clear ice. An assistant is running around with the flares that caught our attention in the first place, sending smoke into the air to match the color of the ladies' outfits. A photographer, equipped with a telephoto lens, is frantically clicking the shutter.

A commotion like this is more of an exception: usually, there is hardly anybody here in winter. If you come to Lake Baikal in winter, you’re likely to find yourself one-to-one with the raw elements: the ice, the snow, the grottoes, the rocks and the silence. 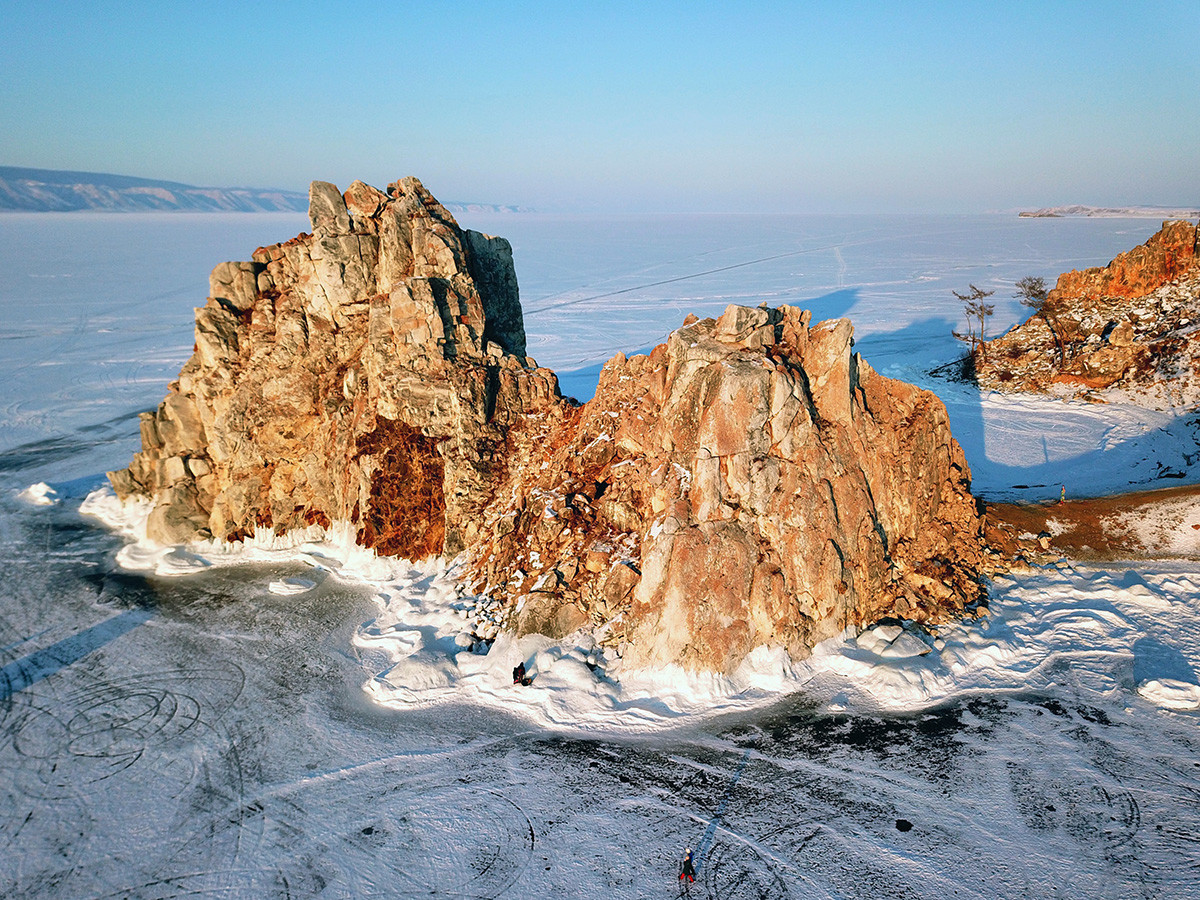 That is why a trip in search of “contentment” usually turns into an adventure that stays with you, not only because of the spectacular views, but also because of the discovery of a new ‘you’. You learn to enjoy things that cause discomfort in everyday life: minus conditions, cold ice, frost, strong winds, etc.

The coolest (no pun intended!) thing is to get out on the ice late in the evening. Walk or drive out far enough for the lights of Khuzhir not to interfere with the explosion of stars above your head; then to hold your breath, and listen. 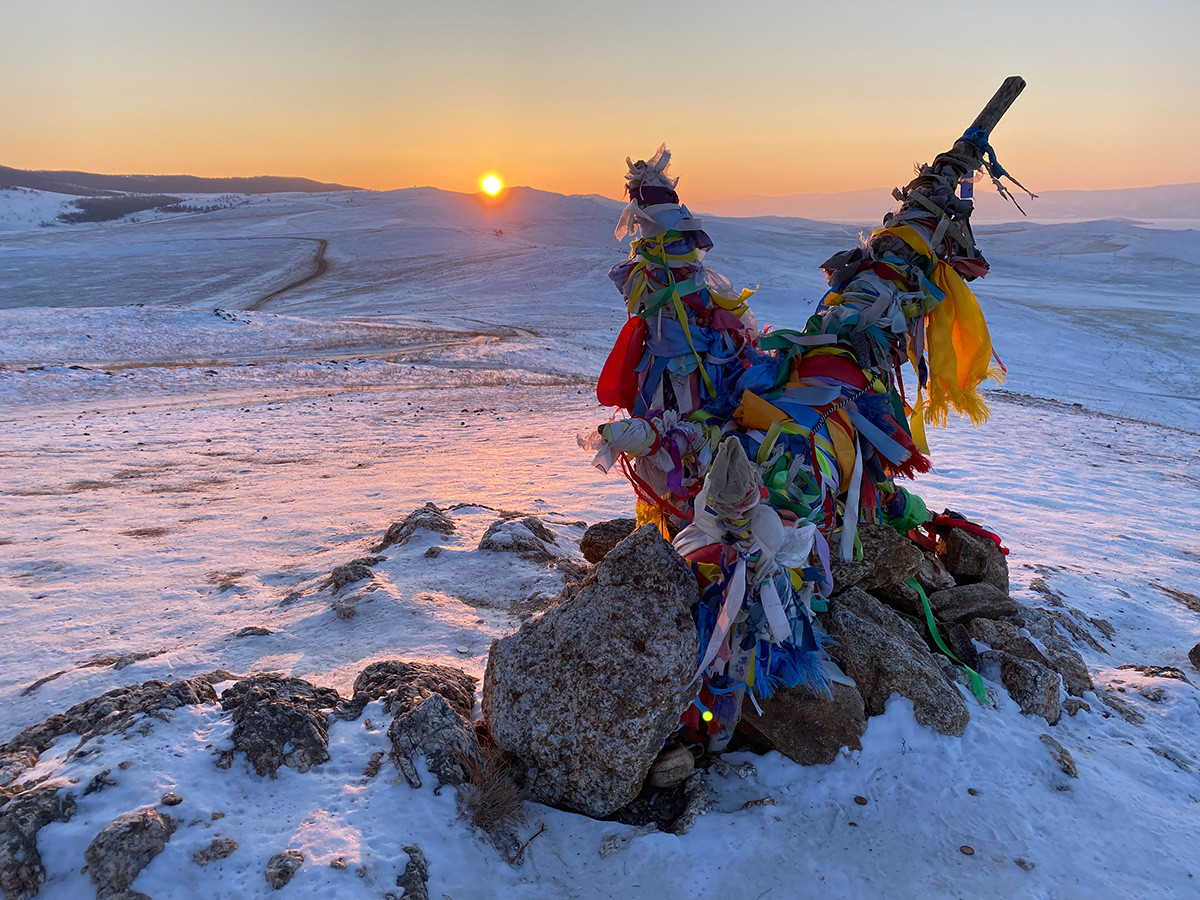 After a while, you will hear on the borders of consciousness, a distant, muffled, but a clear knock. A sound like this should be followed by something important and fundamental in life. It’s the ice moving. But could it actually be the sound of Lake Baikal’s heart beating? 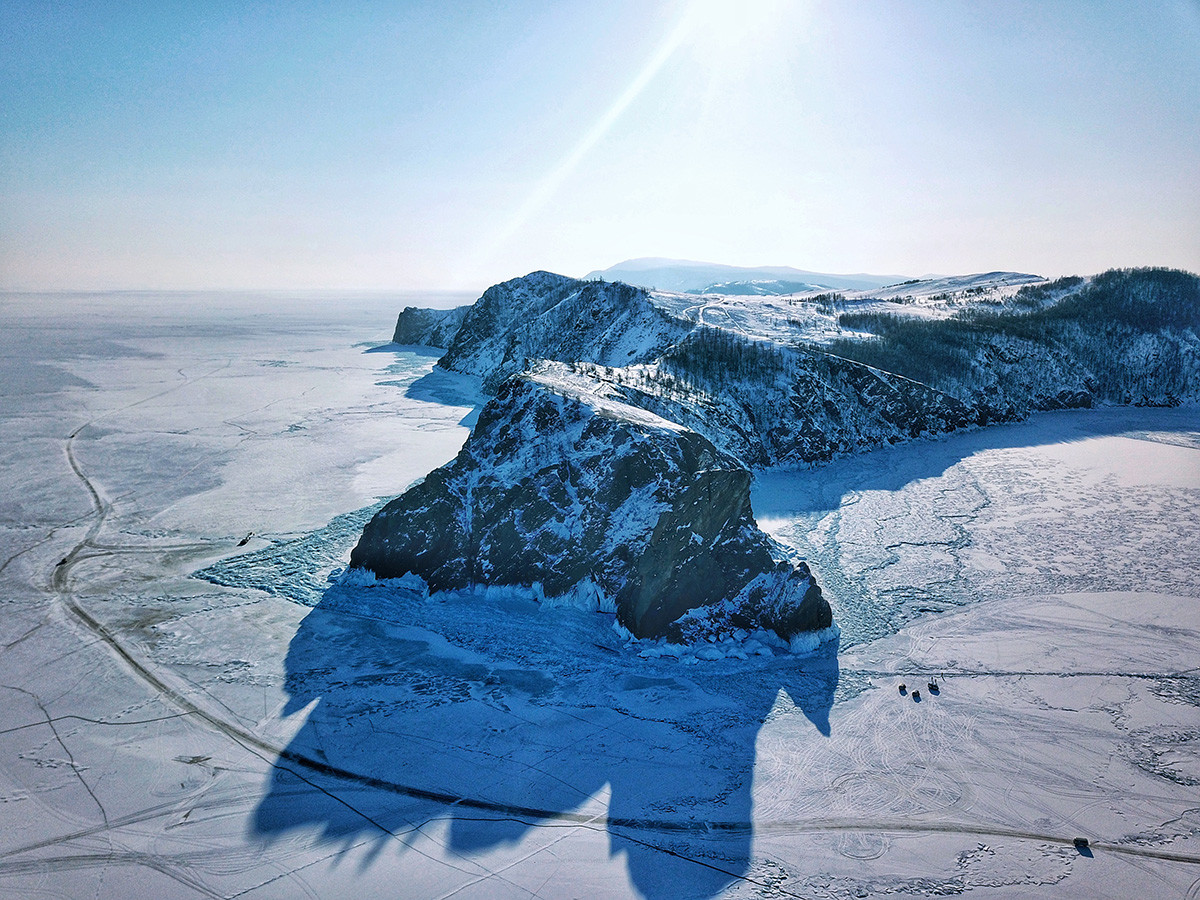