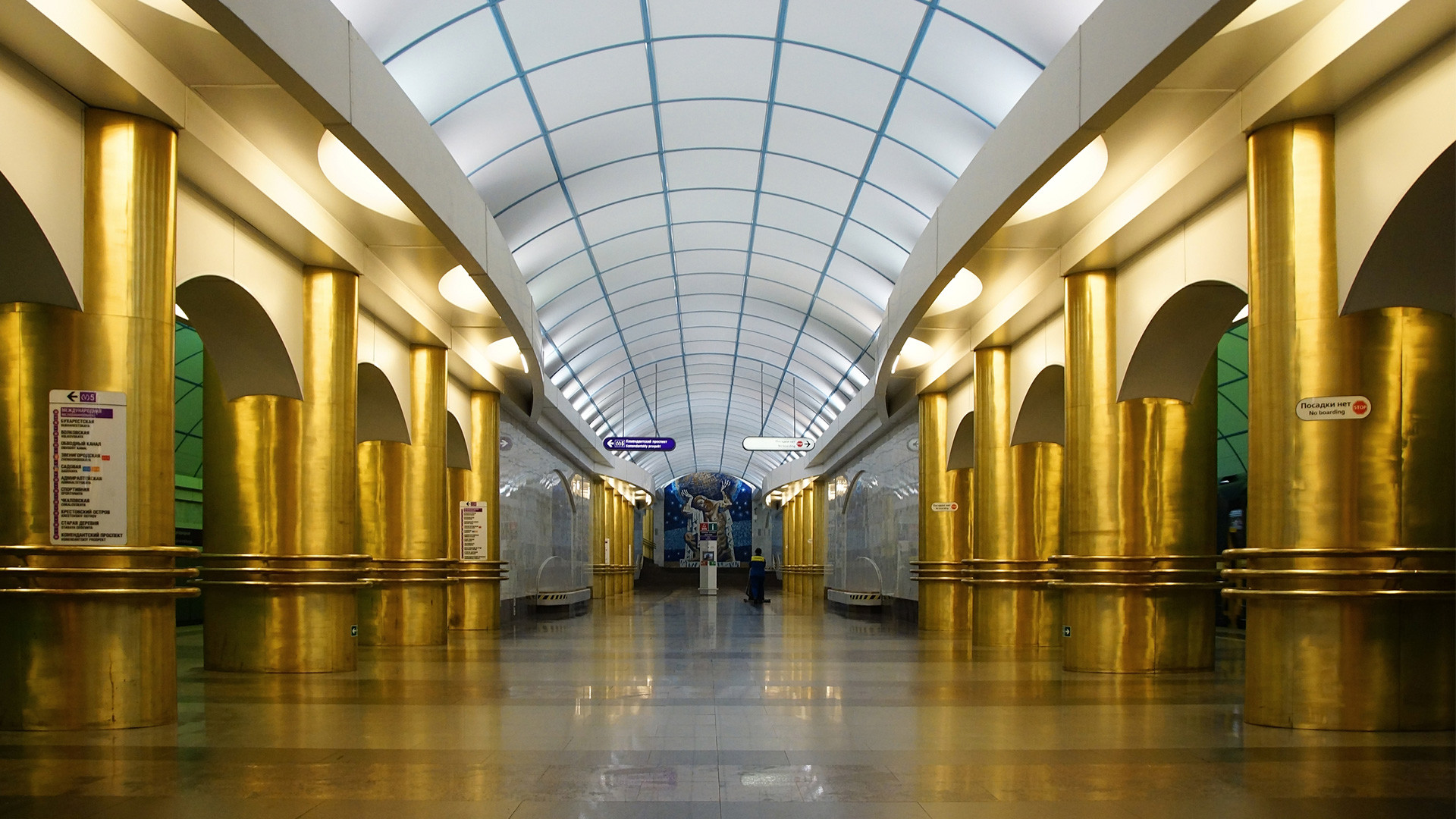 Legion Media
Being the newest in St. Petersburg, this line also holds several records. It is the deepest, the most technically modern, as well as the most decorated one, boasting the most beautiful mosaics.

Connecting the northern and southern parts of the city, line #5 goes under the Neva river and brings passengers to the Hermitage museum, Saint Petersburg Stadium and Central Bus Station. While its deepest section is located 129 meters below ground, the average depth of its 15 stations is 51 meters. We picked out the most interesting ones for you.

The station, situated in the historic heart of St. Petersburg, is very popular among tourists. Palace Square and Hermitage Museum are just three minutes’ walk from it, but you have to use two escalators to get from the platform to the top. Be patient going up and down, because you will be at a record 86 meters below ground.

The name is connected with the nearby Admiralty building – the first shipbuilding yard established by Peter the Great in 1704. According to legend, Peter designed it himself (you can see his image decorating huge mosaics at the end of the hall). 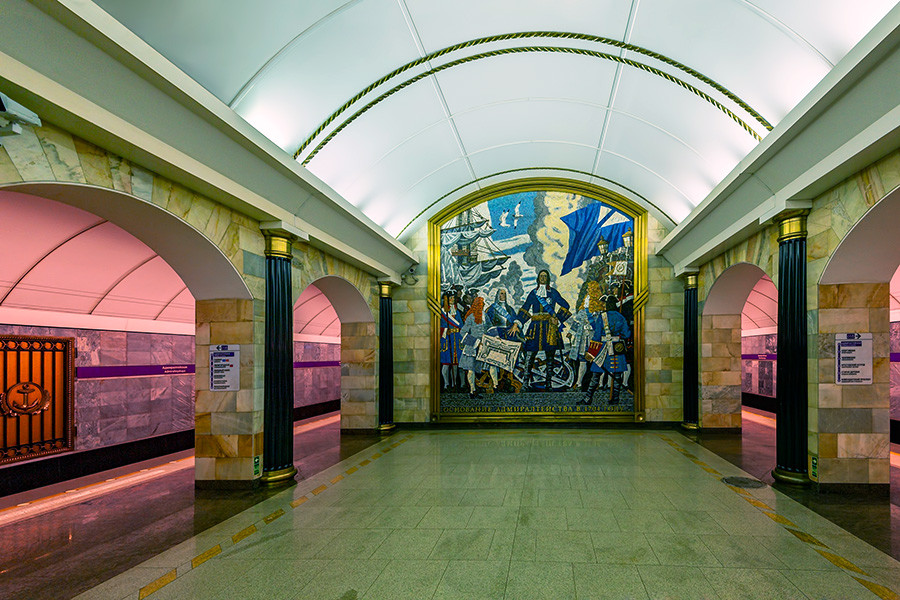 Admiralteyskaya walls tell of Russia’s naval history - the grey marble symbolizes the Baltic Sea, while the metal medallions depict famous Russian admirals. Don’t miss the stylish compass rose in the upper vestibule, and make a video at the 125-meter escalator – one of the longest in Russia. 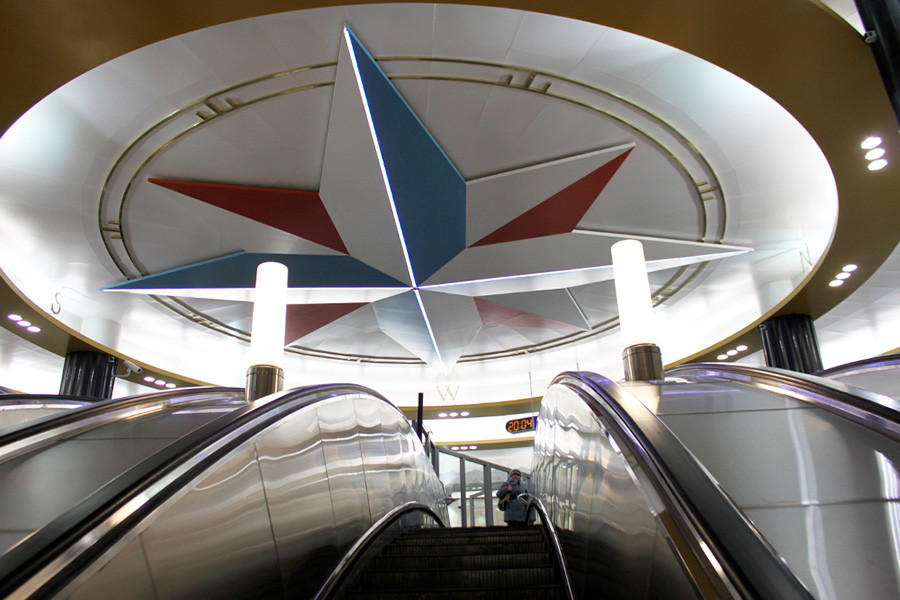 Located near Petrovsky Stadium and Yubileyny Sports Palace, this station was originally dubbed Olympyiskaya. That’s why the lamps look like Olympic flames, and vestibules are decorated with attractive Greek athletes and Gods. 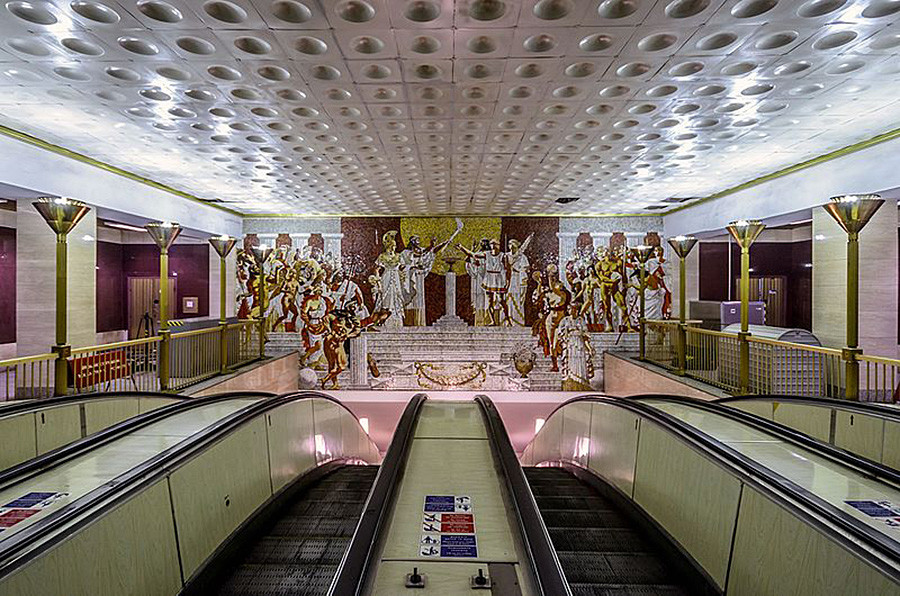 Upper hall of Sportivnaya decorated with Greek athletes and gods

Metro historian Dmitry Grafov compares Sportivnaya with a unique underground casket, filled with surprises. “This is a two-tier station; in the future each floor would be capable of receiving two trains from different lines – purple and circle one, which hasn’t completed yet”, says Dmitry. This creates certain confusion, as some passengers don’t see the rail tracks at the other side of the platform, and start panicking, because they don’t understand how to get to the city center. The trick is simple – you just need to descend using the small escalator. 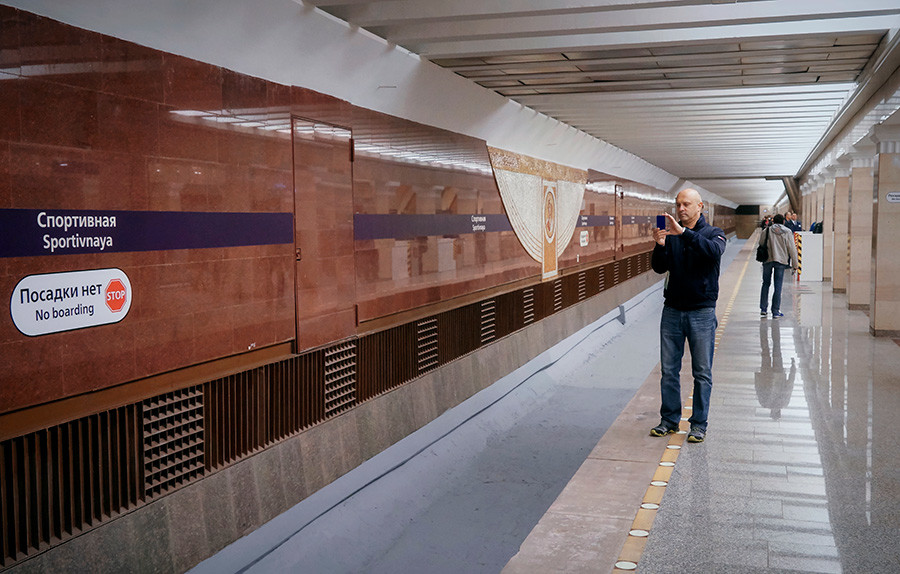 “Sportivnaya station is a mind-boggling 22 meters in height! It’s equal to a seven-floor standard soviet panel house”, Grafov continues. In 2015 an underwater tunnel was added - among other things a comfortable way for tourists wanting to explore Vasilievsky island.

The station was one of the first on the newly opened purple line in 2008. It serves as an important transfer to the red line. The name is connected with Zvenigorodskaya street located above, while the main theme owes its inspiration to the Semyonovsky Lifeguard Regiment. 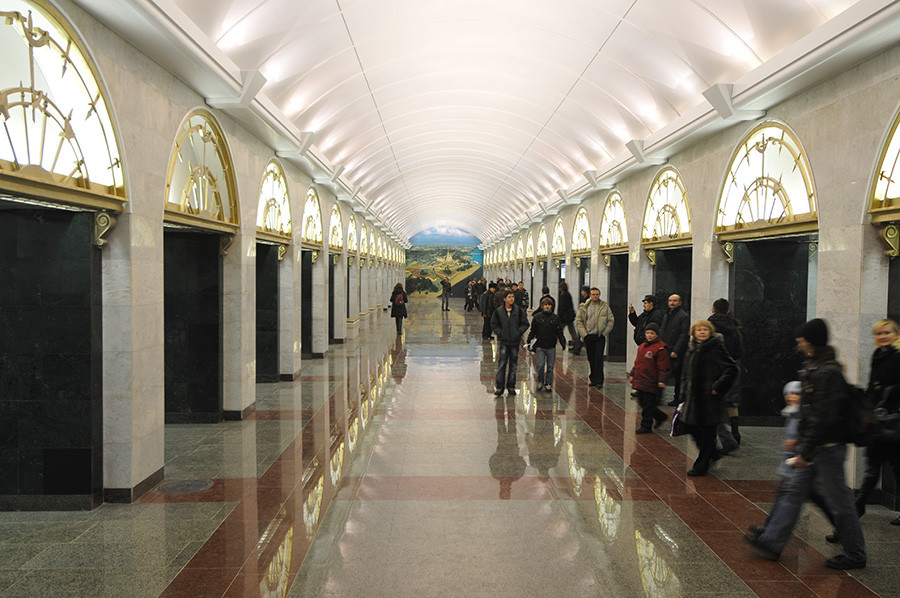 Officers’ barracks and their parade-ground were located above in the past. Usually only beardless brown-haired men with blue eyes were accepted into this regiment, but if you look at the mosaics on the platform, you’ll notice a funny mistake: all the men have brown eyes. 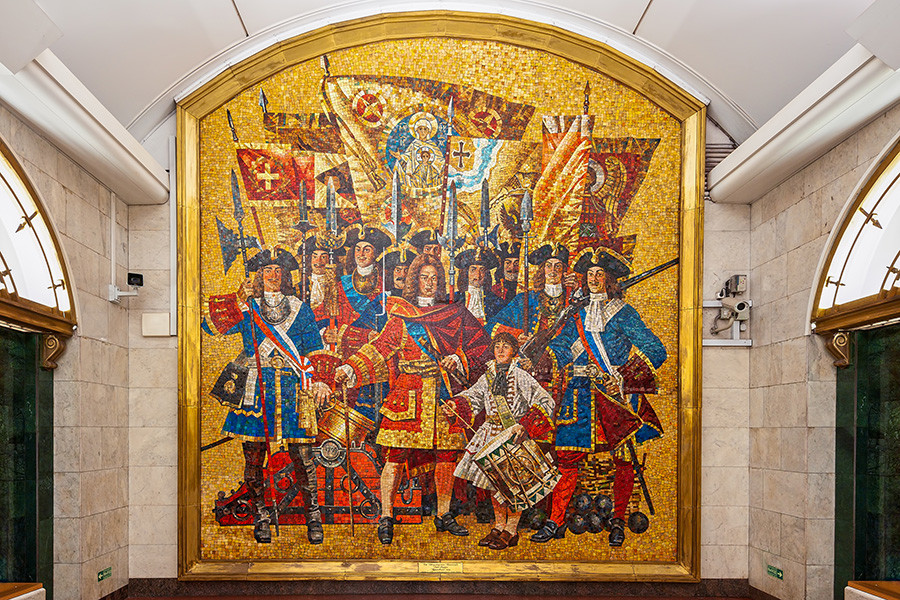 Mosaics at the platform of metro station Zvenigorodskaya (it contains a mistake: all the men have brown eyes while only men with blue eyes were accepted into the Semyonovsky Lifeguard Regiment)

The man depicted in the middle is Boris Sheremetyev – the Field Marshal of the Russian Army during Peter the Great (the tsar himself is second left from Sheremetyev). Green marble and red granite, specially commissioned from India, turned the vestibule into an elegant palace, where officers could celebrate their victories.

Although St. Petersburg is famous for its numerous rivers and canals, Obvodny (Bypass) Canal area is rarely visited by tourists. It used to lie on the city outskirts in the early 20th century, where all of its factories were concentrated. Nevertheless, the station is worth seeing, especially if you arrive by bus (the metro is located a five minutes’ walk from the Central Bus Station). 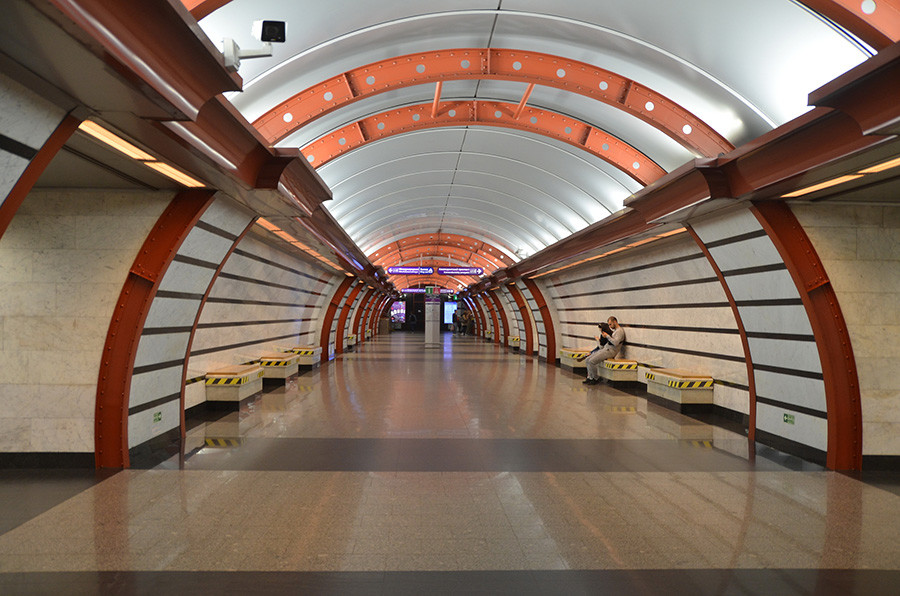 For Ivan Pakalov, a tour guide who does excursions in the metro, Obvodny Canal is the most attractive spot on the purple line. “It magically transports everyone into the epoch of the St. Petersburg industrial boom of the second half of the 19th century. Glass and ceramic wall panels tell us a lot about this period, so you can study the history just by looking at them”, says Ivan. 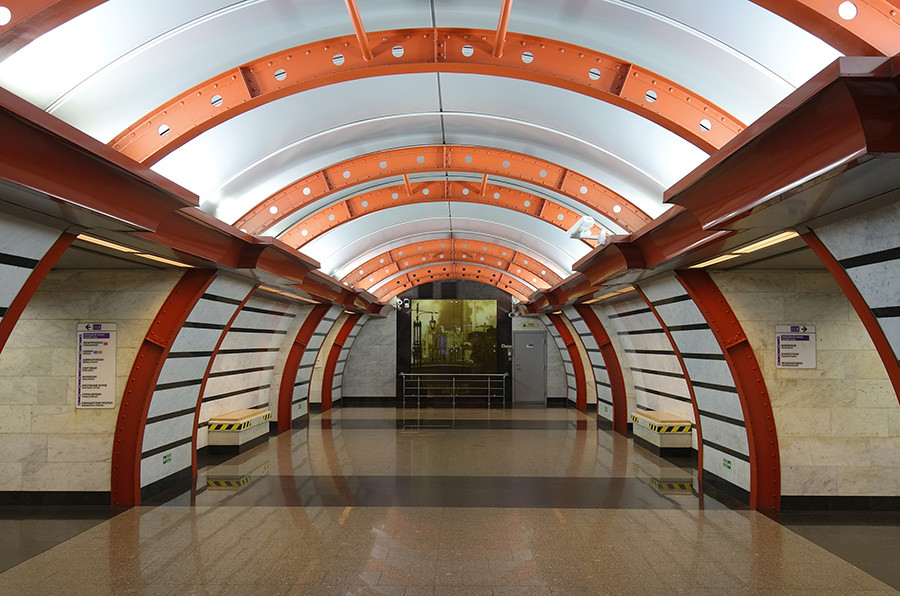 Archive photographs on panels will please history buffs, while red metal arches will guarantee spectacular photos for your Instagram.

Translated as “International”, this station is situated in the Kupchino neighborhood, which holds special status in local folklore.

It is ironically nicknamed “the capital of the world”, although it is situated on the outskirts, and has a reputation for resembling an urban Soviet ghetto. And while the area is pretty grey, dull and mainly consists of monotonous Soviet panel houses, the station’s vestibule is full of vibrance. 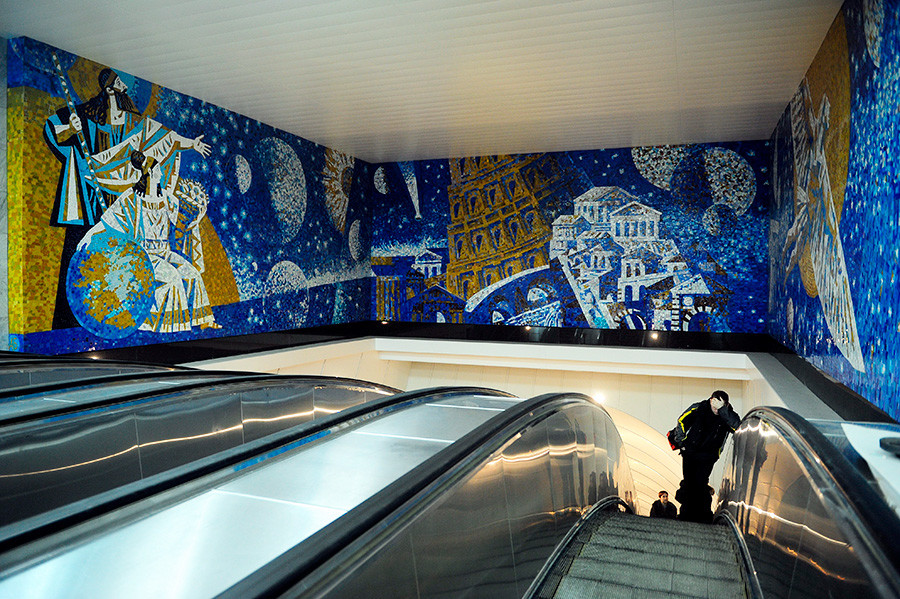 Mosaics upon the escalator of Mezhdunarodnaya station

Local artist and Kupchino resident Sasha Pavlova views the station through an artistic lens: “My neighbor and friend once came up with a formula for the ideal masterpiece: it should be huge, with an epic subject, and in a gold frame. Famous gold columns of Mezhdunarodnaya cheer me up for the same reason, as they remind me of kitschy balloon dogs by American artist Jeff Koons”, she says.

In fact, the columns are coated with brass and not real gold. Initially, two of the mosaics should have been dedicated to international friendship, but nowadays visitors can admire heroes of Greek mythology: a gigantic Atlas and a flying Icarus.