How does Moscow’s first theme park stack up against its foreign rivals? 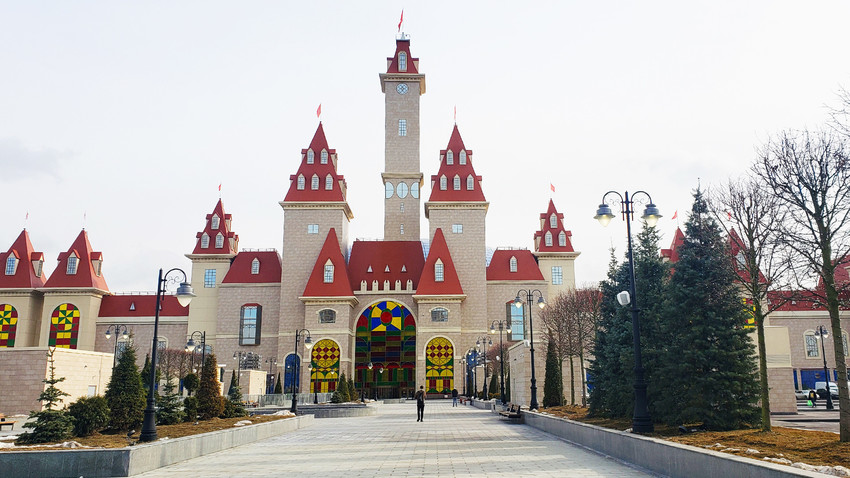 Olga Childs
Vladimir Putin toured ‘Dream Island’, the long awaited “Russian Disneyland” (NOT an actual new Disneyland!), just prior to its opening on February 29, and Russia Beyond was not far behind. Here’s our first look at the park, which turned out to be surprisingly non-Russian.

For a country its size, it is rather unusual that present-day Russia is still entirely void of theme parks. We Russians, therefore, have traveled far and wide and visited every theme park on the planet, but we’ve never had  one of our own. Until now.

RBTH dispatched its own expert - a parent of three, who’s visited every Disneyland and Universal park, a few Six Flags, Legolands and Thorpe Park, as well. How does the Russian venue fare among them? 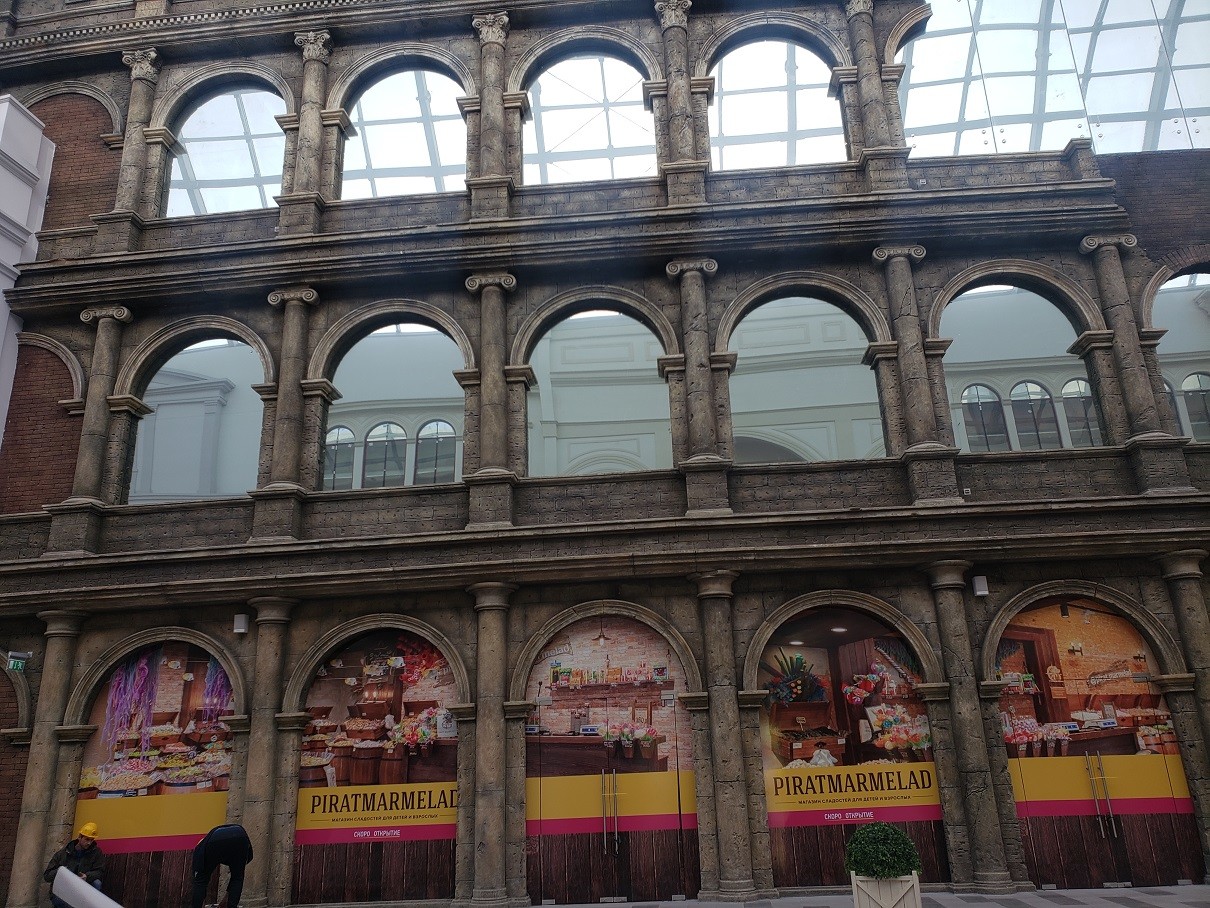 In the best tradition of entertainment strips worldwide, replica of the Coliseum meets the glass dome meets a candy store, coming soon

How Russian is it?

Not very. It does not capitalize at all on anything that would be recognisable as Russia-specific, not even popular home-made cartoon characters. The park looks and feels like it could have been anywhere in the world and was built clearly to mimic a typical theme park, such as Disneyland or a Universal theme park. Rides were mostly built and installed by companies that have installed similar rides in other parks around the world, and have been certified by a German company that specialises in theme park ride certification (not something we really have in Russia). The rides are all classified for permitted use based on rider's height, like elsewhere in the world. 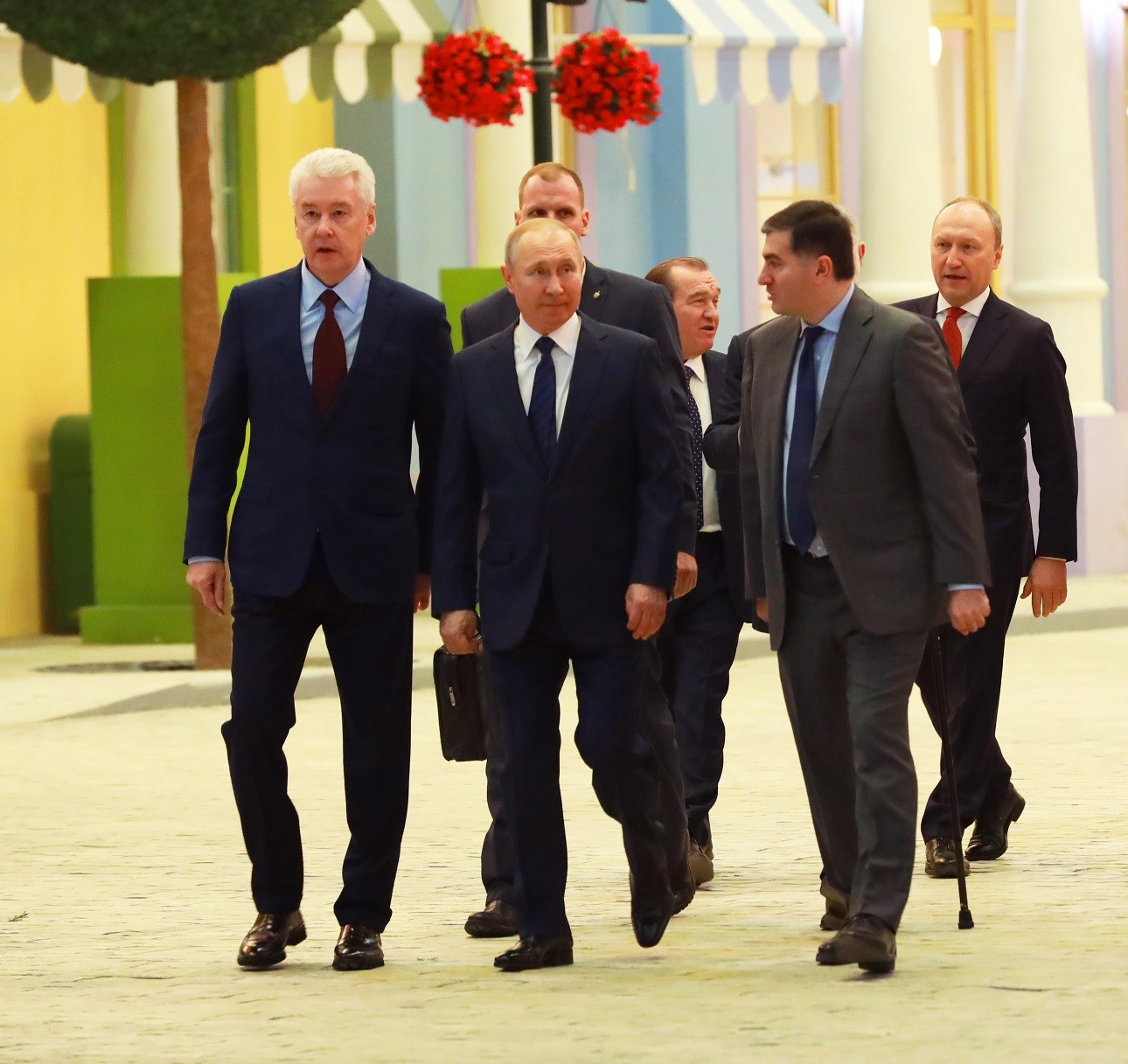 “Character branding” makes heavy use of licensed characters like Hello Kitty, the Smurfs and the Teenage Mutant Ninja Turtles. Hello Kitty and Smurf themes are used as theme zones for smaller children, with rides typical for such a park worldwide. One ride in the Hello Kitty zone is quite similar to Disney's well-known spinning teacups, but there will also be a beauty salon for little princesses. Sanrio, the owner of the Hello Kitty brand, will run a daily thematic show similar, again, to one they do in other parks. The Smurf zone, designed for smaller kids, reminds of the Dr. Seuss zone in the Universal theme park in Florida, or the Dumbo ride for the little ones in Disneyland. 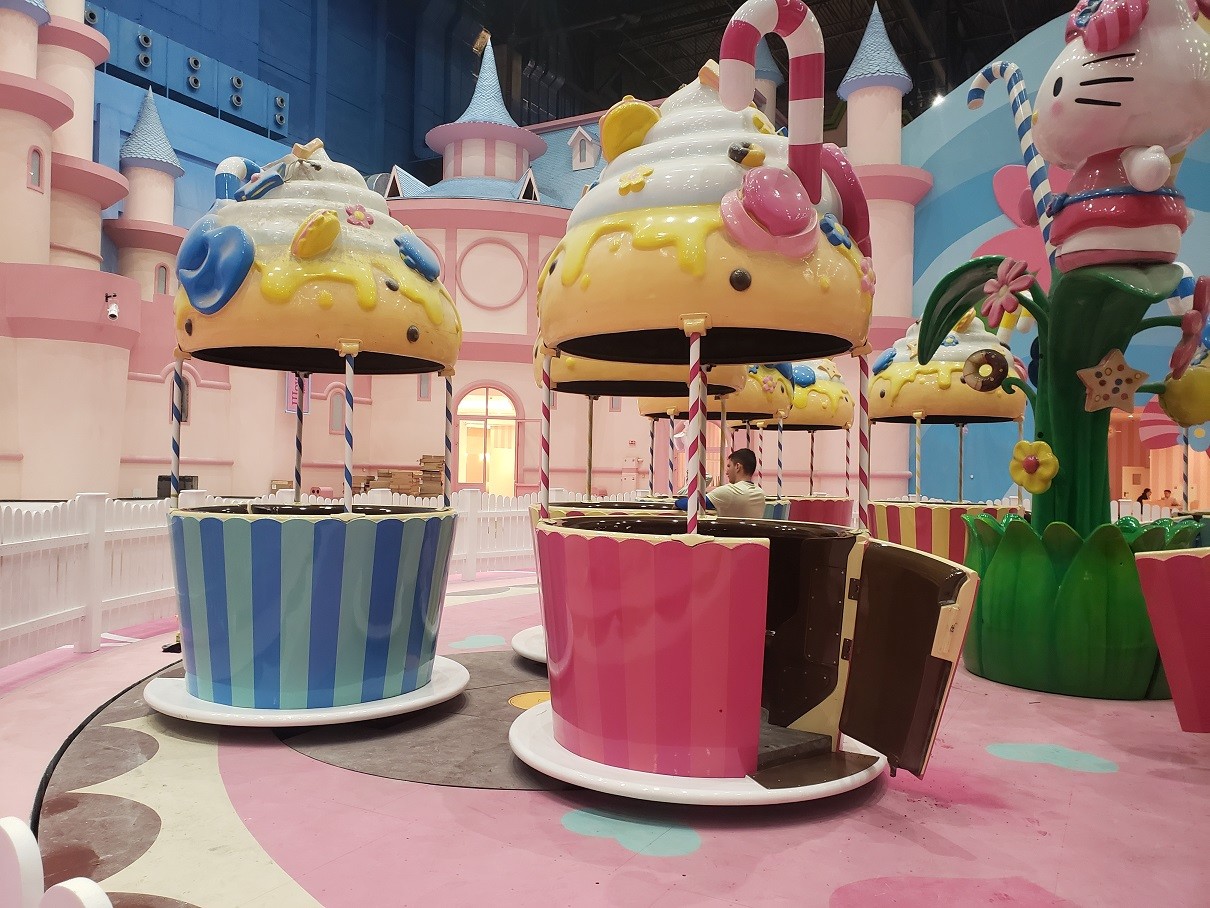 The branding the park considers proprietary and localized is still based on internationally recognised themes that one does not usually associate with Russia - for example, the zone containing the park’s most thrilling ride is called Mowgli in the Land of Dinosaurs, both themes being quite generic, but neither particularly associated with Russia. Animatronic life-scale dinosaurs glare and roar at you in the jungle-themed zone.

Other zones are based on the Snow Queen, a fairy tale by Danish writer Hans Christian Andersen that is very popular in Russia, and Pinocchio. 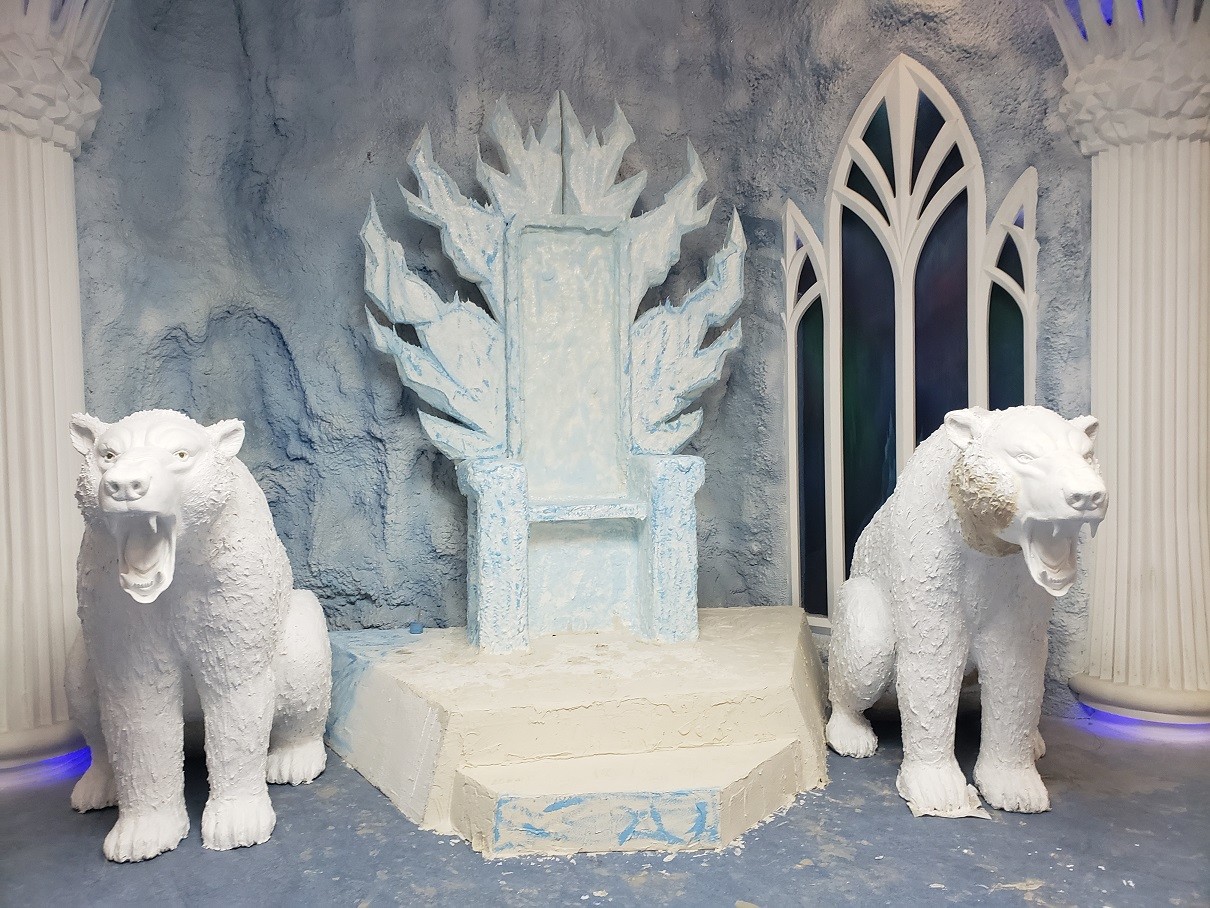 Last touch of paint for the throne of the Snow Queen, where the character will greet children

The rides and design concepts are all, to a degree, modeled on international prototypes and built by foreign contractors. The promenade zones that emulate well-known city streets and replicate some famous buildings are also a signature of various international entertainment environments (not least of all, the famous Las Vegas strip).

The press office says they are often asked about the park’s perceived “non-Russianness” with apparent scorn, but bringing in international teams to design the rides and zones was inevitable, as Russia simply does not have this sort of expertise, because, well, it never had theme parks up until now.

What about the weather?

Fear not, thе entire park is indoors - due to concerns related to Moscow's climate, which sees subzero temperatures and considerable amounts of snow for a better part of the year. Its promenade (‘City Walk’, as some other parks call their corresponding zones) is enclosed under a humongous glass dome, that lets in the sun, but not the rain. The press office says it’s the largest glass dome in Europe and assures me “a tank can drive on it”. We cannot test the latter claim, but it looks pretty. 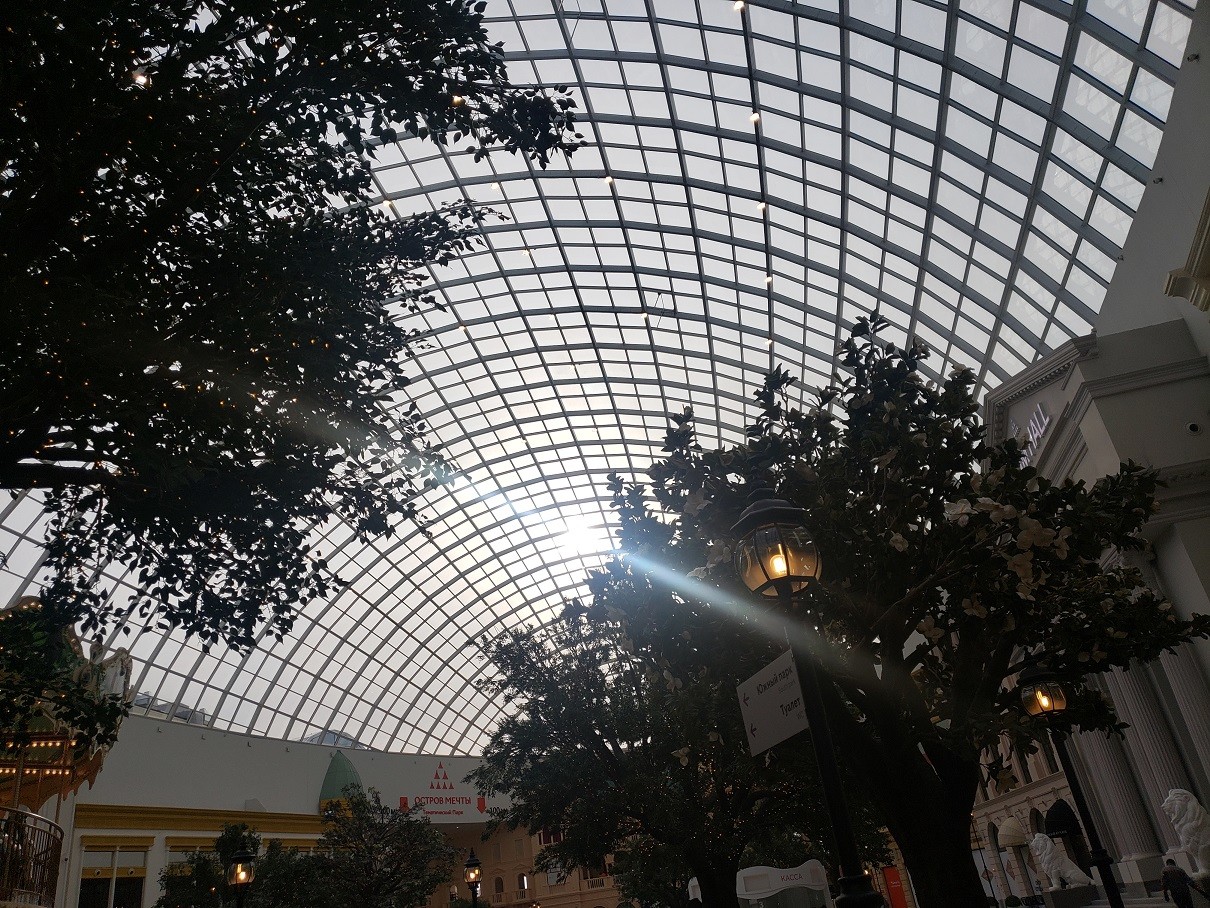 The main areas of the park are located, basically, inside a gigantic hangar - but it does not impact their scale, nor do the long distances one has to walk to get around it. Its size and scale feel comparable to those of an ordinary theme park and you quickly forget that you are indoors. The designers did their best to manipulate the controlled environment to their advantage and different zones have different lighting and ambience based on their theme. 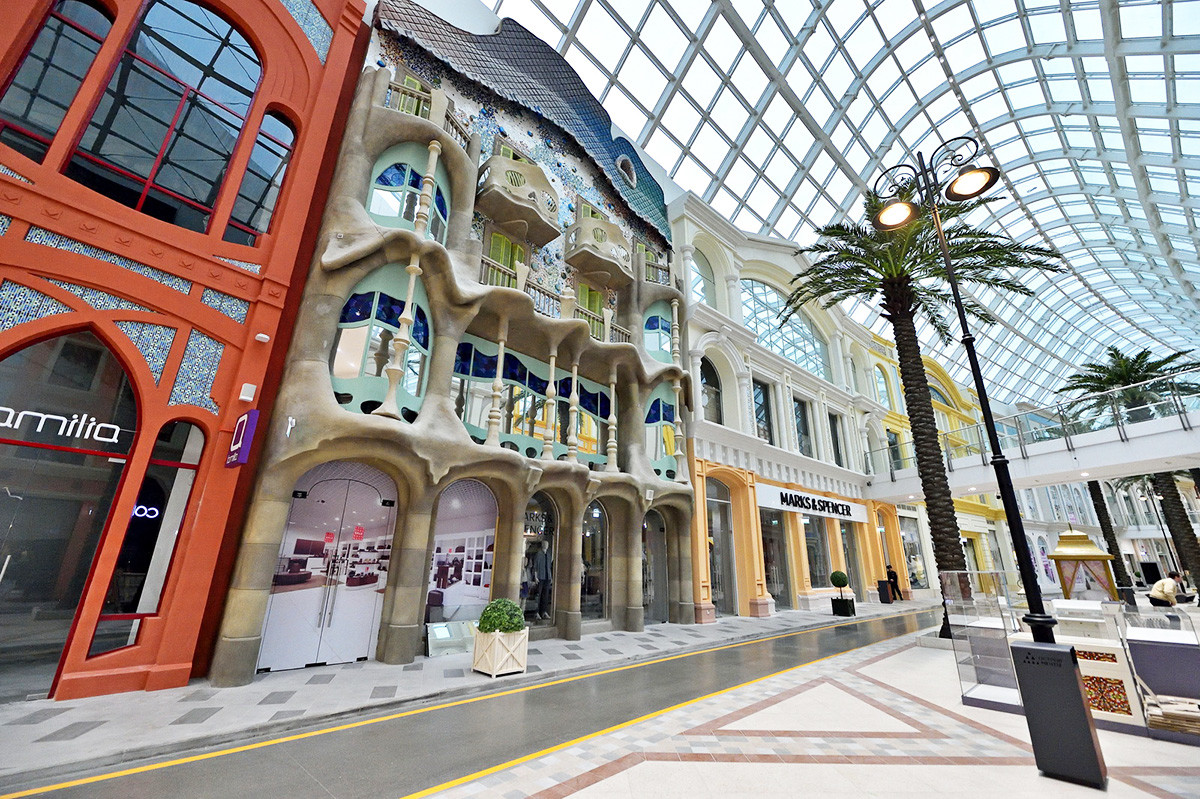 Barcelona at the promenade

Is it like any park you may have been to?

Almost unexpectedly at this point, we’d have to say - Disneyland. It is decidedly a family park, and offerings tend to balance towards smaller kids. Its indoor nature precluded the installation of large-scale roller coasters, like you would see at Six Flags, Thorpe Park or Alton Towers. Both Disneyland and Universal make use of their outdoor locations to some extent, offering water-based rides - but you won't see any here.

However, the sort of rides it does have are the most reminiscent of those parks - guests driven along a corridor decorated with characters and music (in this case, from the Hotel Transylvania animated movie) is a concept similar to Disney’s ‘It’s a small world!’, little kid zones and character greetings, smaller-scale thrill rides for the older ones (Disney and Universal do have semi-indoor versions of roller coasters, including one in the dark, and indoor thrill flights, both replicated here). 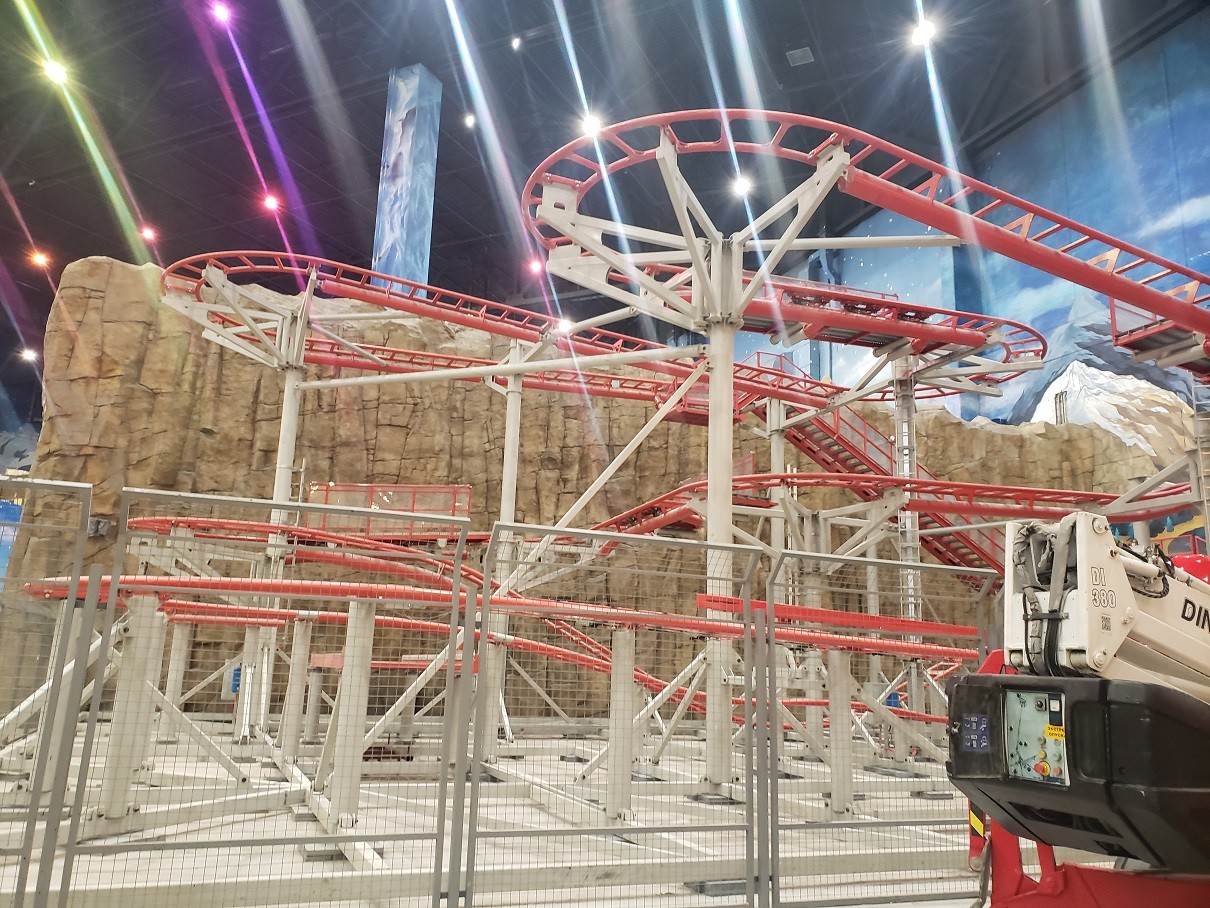 This track might not look like much, but wait until you are propelled around it in VR glasses that make you believe you are driving a race car

Both Disney and Universal have 4D-style rides, based on visitors sitting in a pod and being shown a video that makes it feel like they are on a roller coaster, in space or are falling (such as, a typical Star Wars ride at Disney or the Simpsons ride at Universal Florida). This is used heavily at Dream Island, but the offering is upgraded with more modern tech: the modestly looking coaster with sharp turns is enhanced by VR goggles that make you experience what it's like to be a race car driver. In another instance, a traditional “drop tower”, for lack of actual height, is enhanced with 4D and video in order to increase the thrill level. 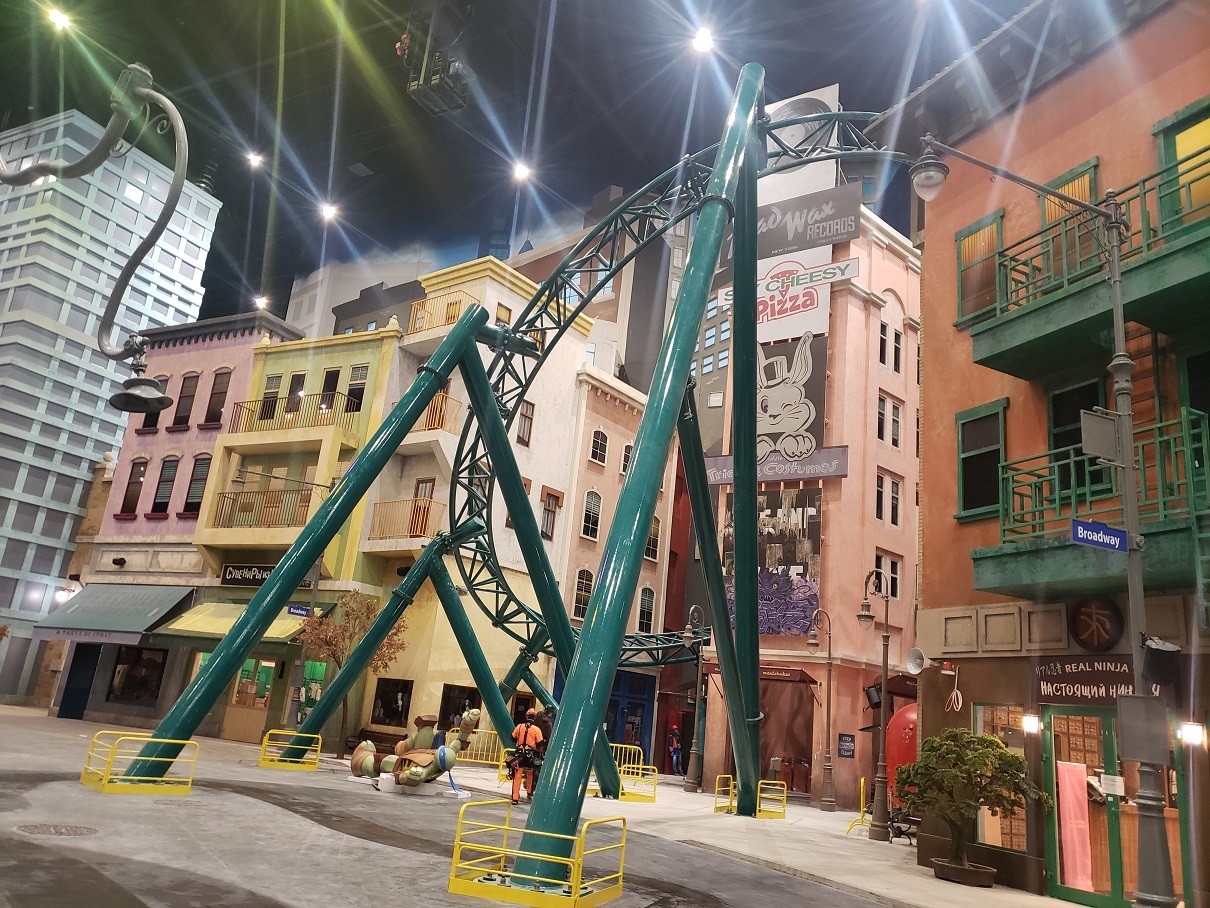 Ninja Turtles zone is home to the park's only roller-coaster, most of the ride will be in the dark at 80 km per hour

The Teenage Mutant Ninja Turtles zone is a relatively “high thrills” zone for older visitors, and features the park’s only roller coaster. Most of the ride is in the dark, with comic-based “surprises” springing unexpectedly out at you. Its NYC subway-themed design of postindustrial devastation seems straight out of a generic international theme park and is more typical of a roller-coaster based park, such as Thorpe park in England. 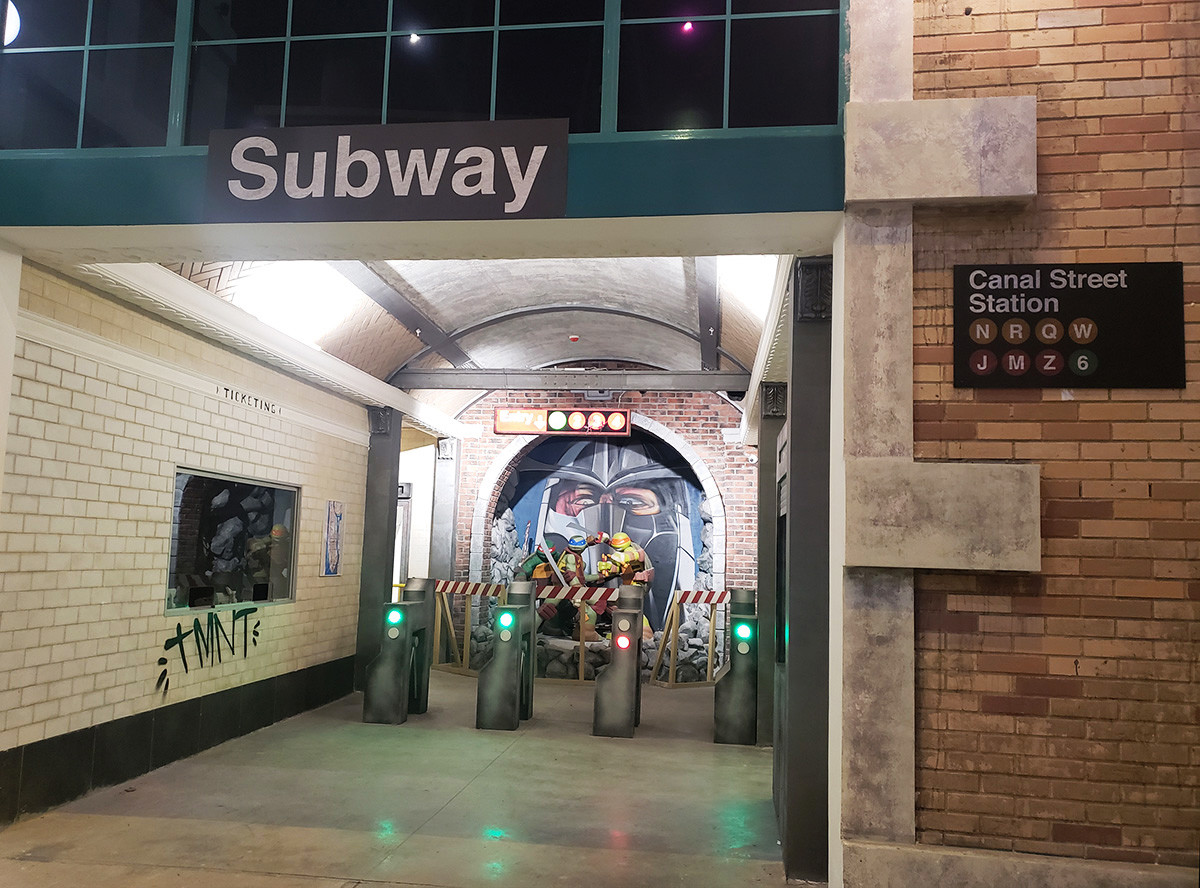 Essentially, the park is newer and shinier than most of its prototypes – thanks to newer technology and solutions.

Who owns it, where is it and is it actually an Island?

The park is entirely privately-owned by Regions Group, which is controlled by businessman Amiran Mutsoev. The investment is said to be approximately $1.5 billion. It is not actually an island, but a peninsula of sorts, with the Moskva River hugging it on three sides. It’s located next to the Tekhnopark station on Moscow Metro line 2 (the green line).

Emphatically, yes! - whatever your expectations of a “Russian Disneyland” were, they will probably be met or exceeded. Move over, Disney, and tell Universal the news! 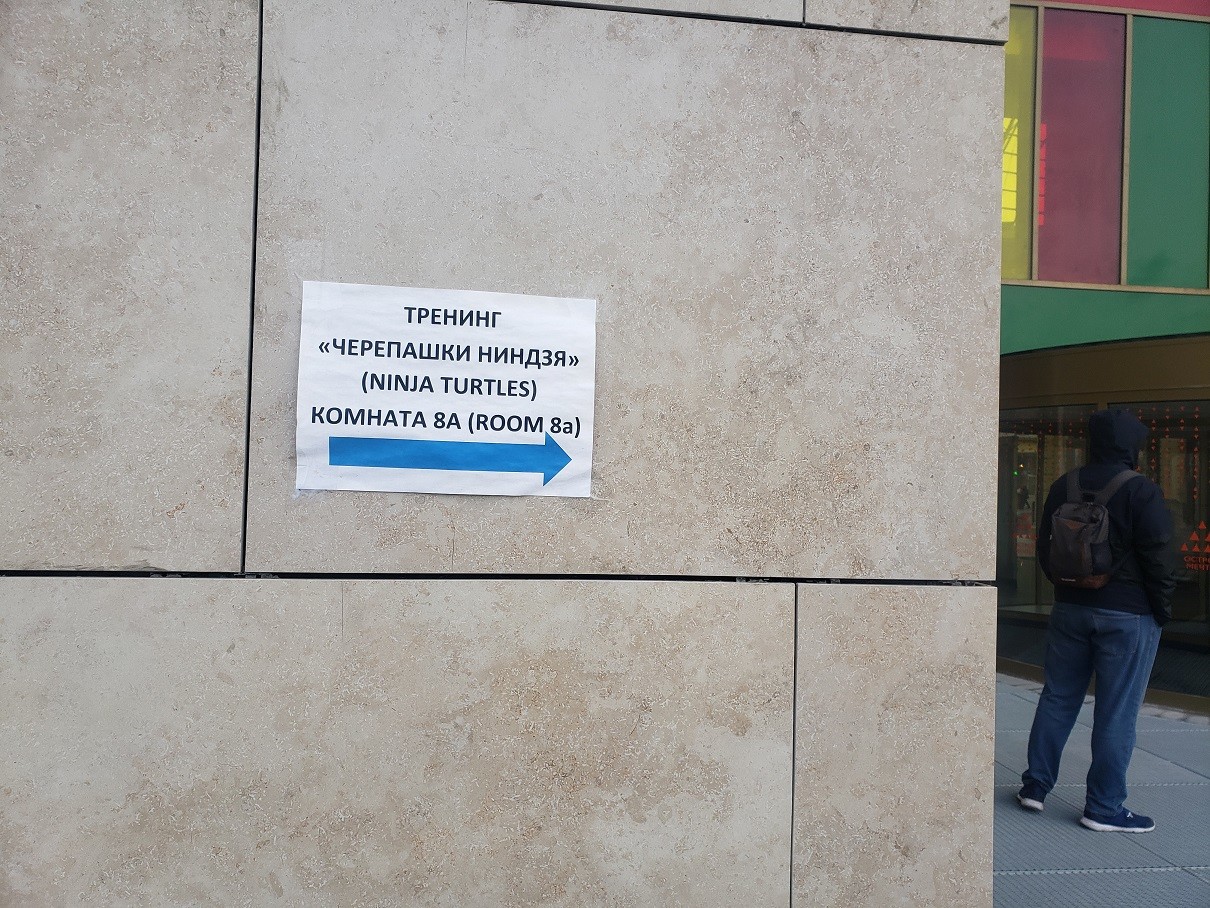 A sign taped to the wall the day before opening, directs staff to Ninja Turtles character training, in English

But perhaps, not yet. Even though the park officially opens this weekend, on February 29, 2020, about a year behind the initially anticipated opening, not all of its rides will yet be fully operational. The remaining rides are said to be available by the end of May 2020, so plan for the summer.

Other things to note are: the promenade zones will be fully open to the public (they are hoping for up to 50 million visitors a year), and you will only need tickets, which can be purchased at the ticket office in the promenade, online or at ticket vending machines, to get into the actual theme park.

Tickets are circa $40, with various options for families and concessions.