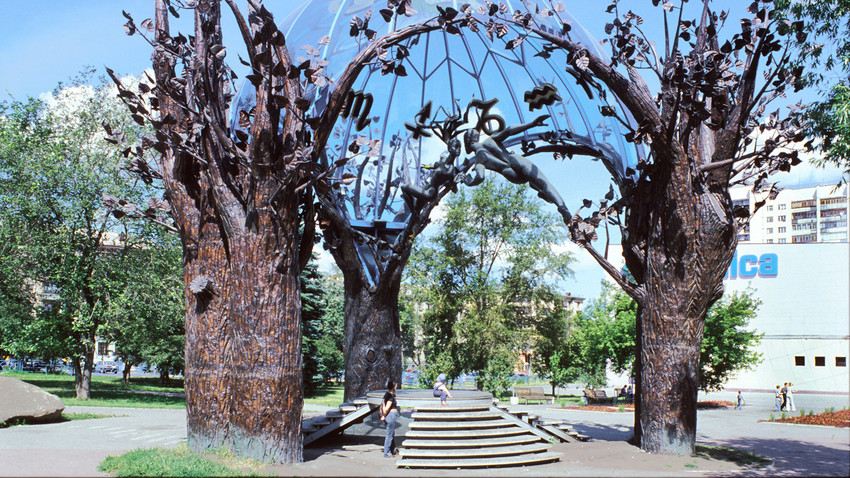 Chelyabinsk. "Sphere of Love," by Victor Mitroshin. Erected in 2000, this sculpture consists of four bronze trees surrounding two kissing figures under a dome of blue Italian glass. It has become the city's beloved calling card. July 13, 2003.

Chelyabinsk, located on the Miass River the southeastern Ural Mountains, is one of those largely ignored workhorses that form the backbone of Russian heavy industry. When the town’s relative obscurity was broken by a spectacular encounter with a meteorite in February 2013, it seemed that few outside observers knew much about this seventh-largest city in Russia. But Chelyabinsk has a varied architectural heritage that reflects profound social changes over the past century. 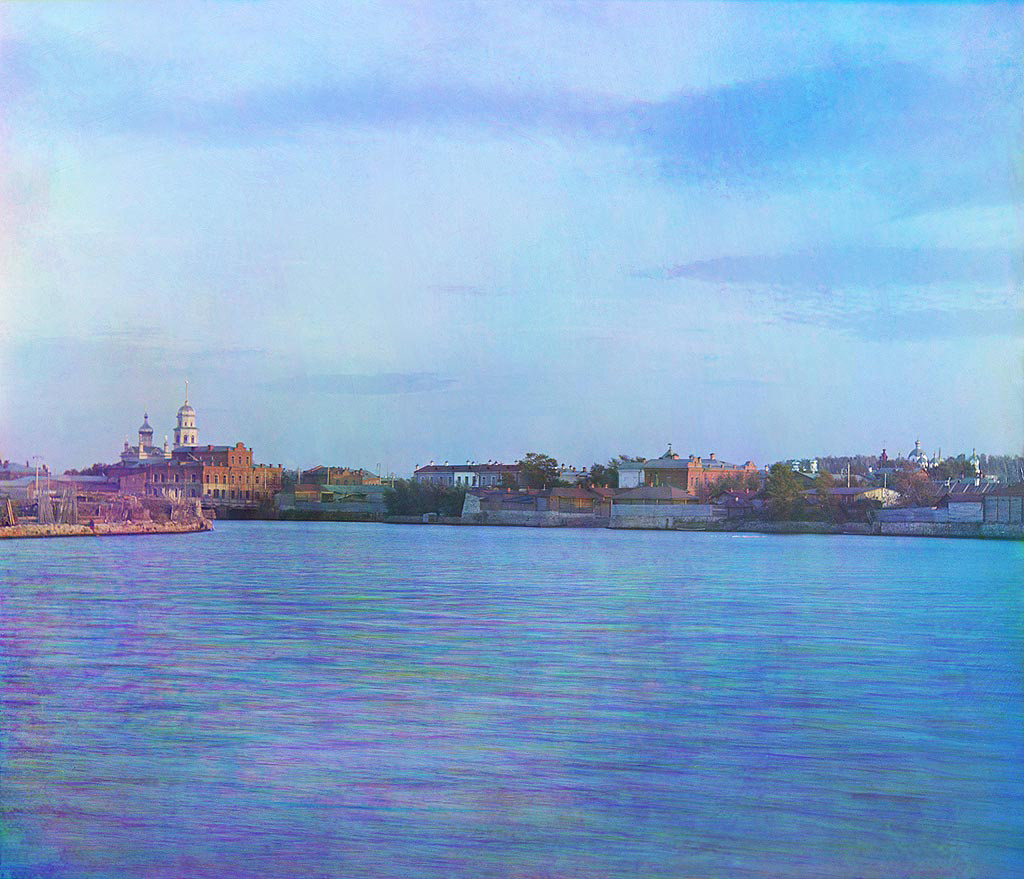 View of Chelyabinsk down the Miass River. Visible on far side are brick commercial buildings with Cathedral of Nativity of Christ (left) and Convent of the Hodegetria Icon of the Virgin (far right) - both demolished in the Soviet period. Late summer 1909.

Russian chemist and photographer Sergei Prokudin-Gorsky discovered some of the town’s architectural gems in Summer 1909, when he made his first trip to the Urals. The journey was part of an expansion of his project to photograph the diversity of the Russian Empire in the early 20thcentury. In May 1909, Emperor Nicholas II invited Prokudin-Gorsky to the imperial residence at Tsarskoe Selo to show his images of Russia through an elaborate projector. Following this presentation, the photographer gained the patronage of the imperial court to continue his travels, thus accelerating the pace and the scope of his work.

Chelyabinsk was founded in Autumn 1736 as part of a chain of forts constructed to protect supply lines from the granaries of western Siberia to the new Orenburg territory on Russia’s southern frontier. Cossack troops and settlers moved into the vast steppes roamed by Bashkir tribes, who responded with frequent attacks on Russian supply routes and outposts. By 1739, the Chelyabinsk fort had a population over 1,000. 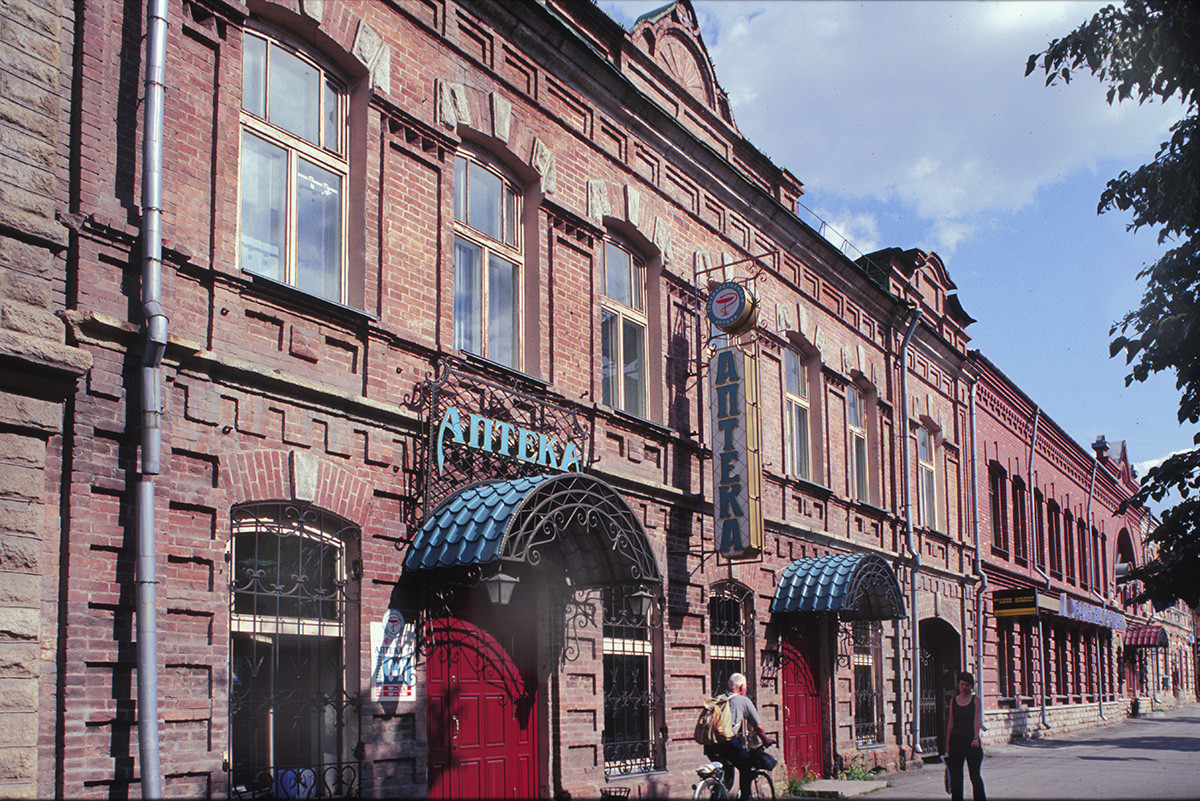 Situated in a region rich in metals and foundry towns such as Kasli, Chelyabinsk remained a local market town for over a century. Its placid existence was broken by the settlement’s capture for two months in 1774 during a widespread, prolonged rebellion of serfs, Cossacks and Bashkirs led by Emelyan Pugachev. 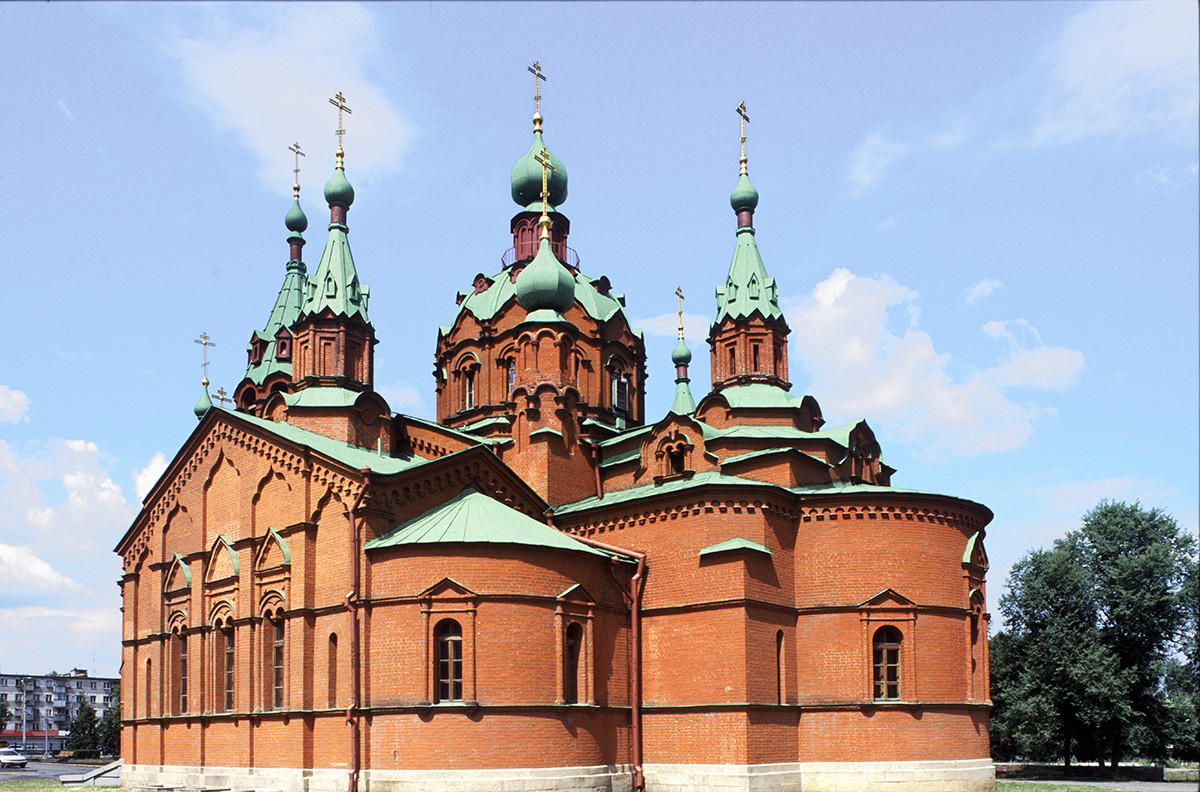 Church of St. Alexander Nevsky, southeast view. Built in 1907-11 to a design by the prominent architect Alexander Pomerantsev. Closed in 1930, converted to planetarium. Restored in 1980s as concert hall. July 23, 2003.

The town’s growth advanced rapidly in the 1890s with the construction of the Trans-Siberian Railroad, which made Chelyabinsk a major junction in the southern Urals and a gateway to the east. Stimulated by agricultural reforms and promises of rich lands in Siberia, thousands of peasant families passed through resettlement centers in Chelyabinsk, where they received rudimentary care and supplies for the arduous trip to Siberia. 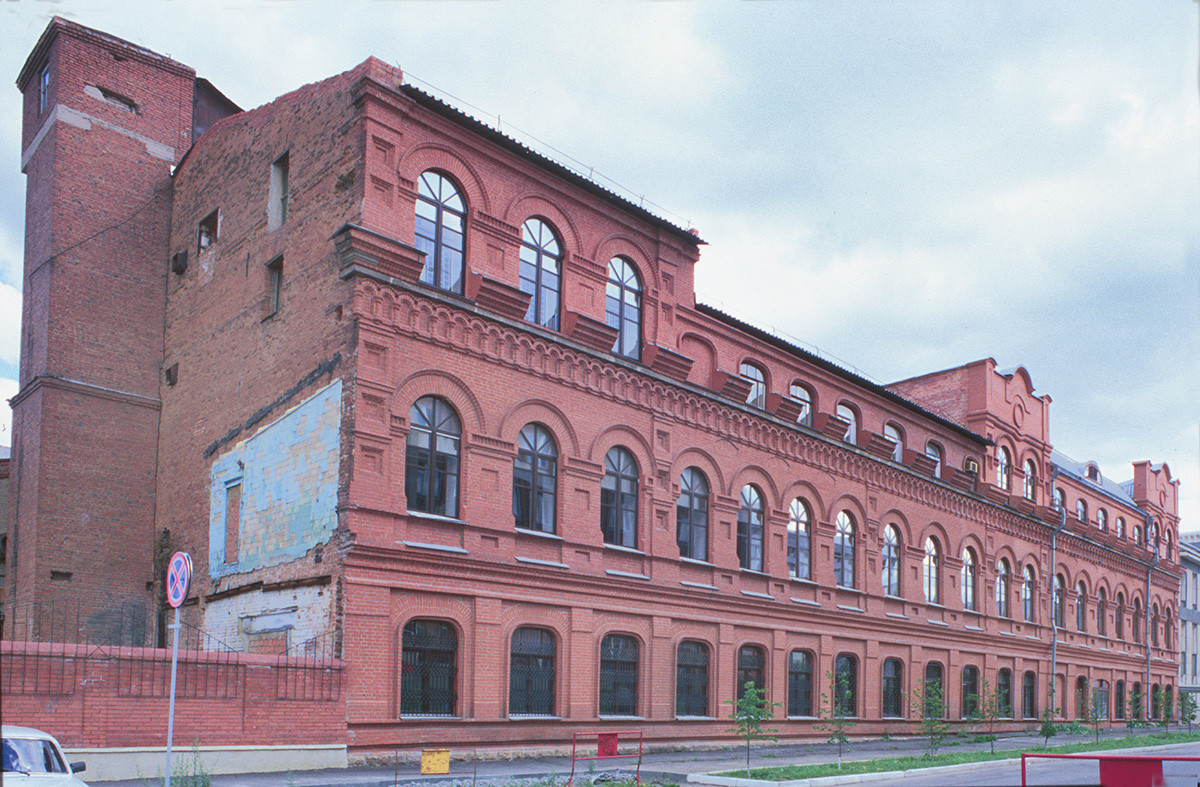 Alexander Kuznetsov Tea-Sorting Factory. Built in 1904, the Kuznetsov factory was among Russia's major tea processing facilities. By the time of Prokudin-Gorsky's visit it employed some 2,000 workers. July 12, 2003.

By 1897 the town had a diverse population of 20,000 inhabitants, including a Jewish community whose synagogue still functions. The pre-revolutionary decades witnessed the construction of numerous Orthodox churches, some of which have been restored in the post-Soviet period. Chelyabinsk also has several mosques. 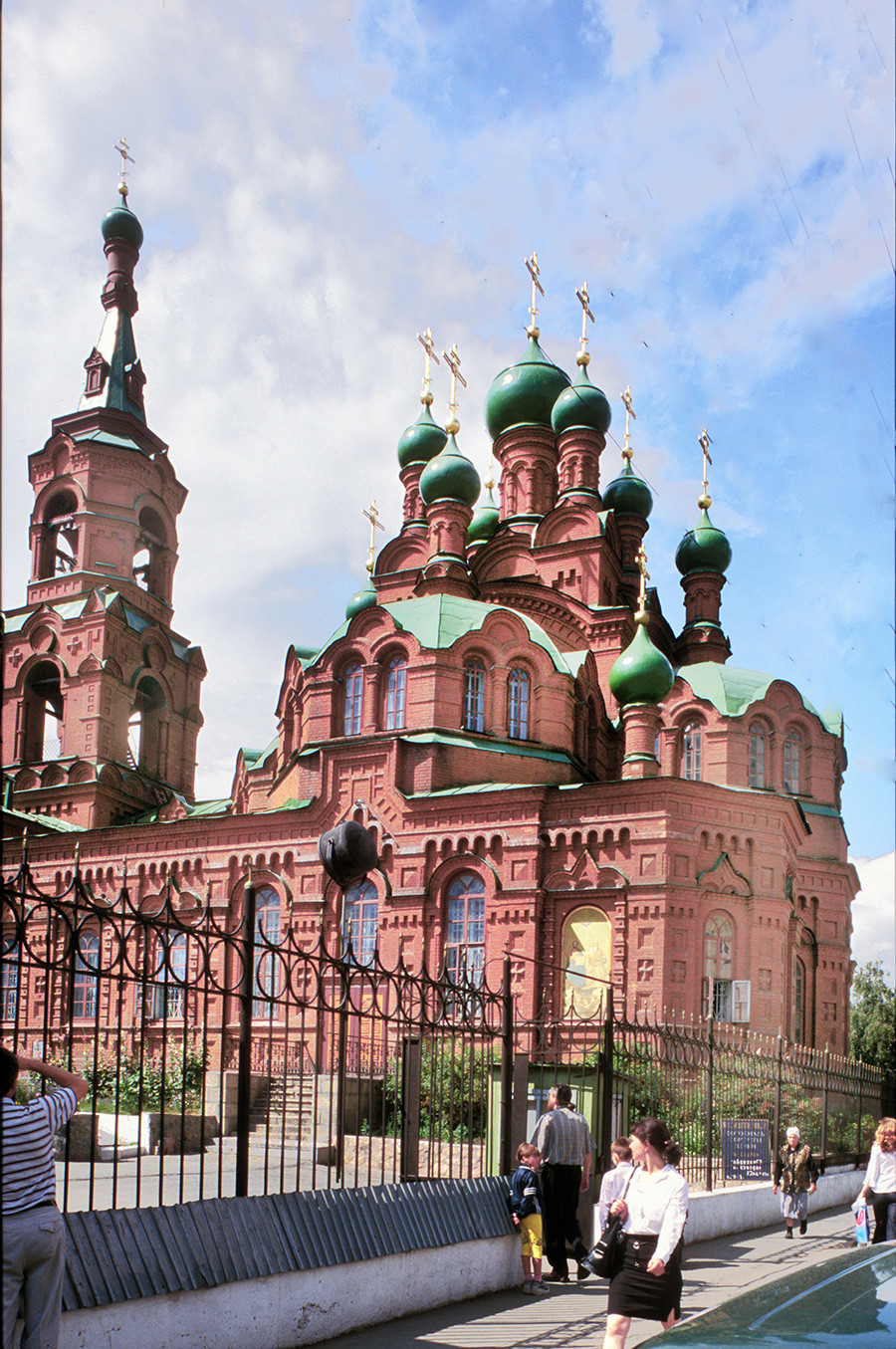 Commercial growth at the turn of the 20th century was boosted by agriculture and the construction of grain elevators. The transfer to Chelyabinsk of the main eastern customs point meant that the lucrative trade in Chinese tea was now processed in the town’s tea sorting plants. All of this was enabled by the railroad. 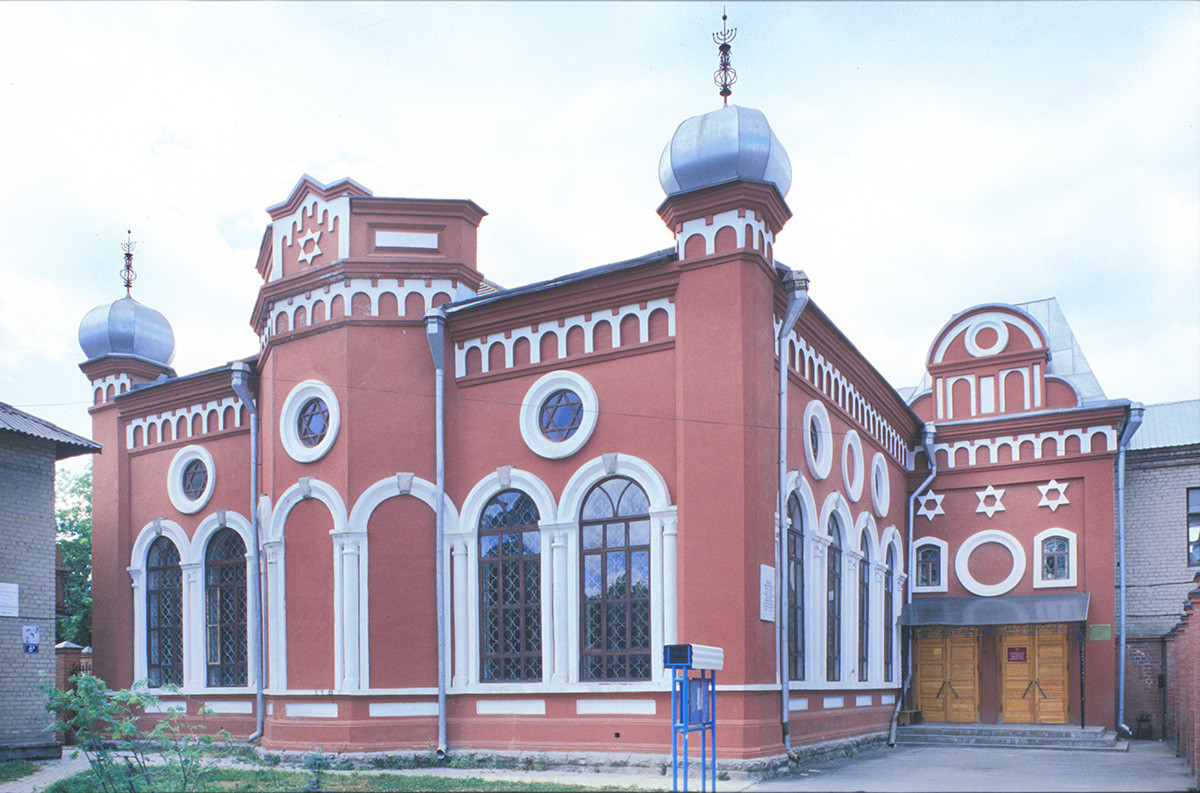 In the decade following Prokudin-Gorsky’s visit war, revolution and civil war took their toll, yet Chelyabinsk recovered and tripled its population by 1926. The launching of the Soviet Union’s first five-year economic plan in 1928 and the related collectivization of agriculture meant massive social upheaval. But for Chelyabinsk, the rapid march toward industrialization transformed its appearance and quadrupled its population in just over a decade. 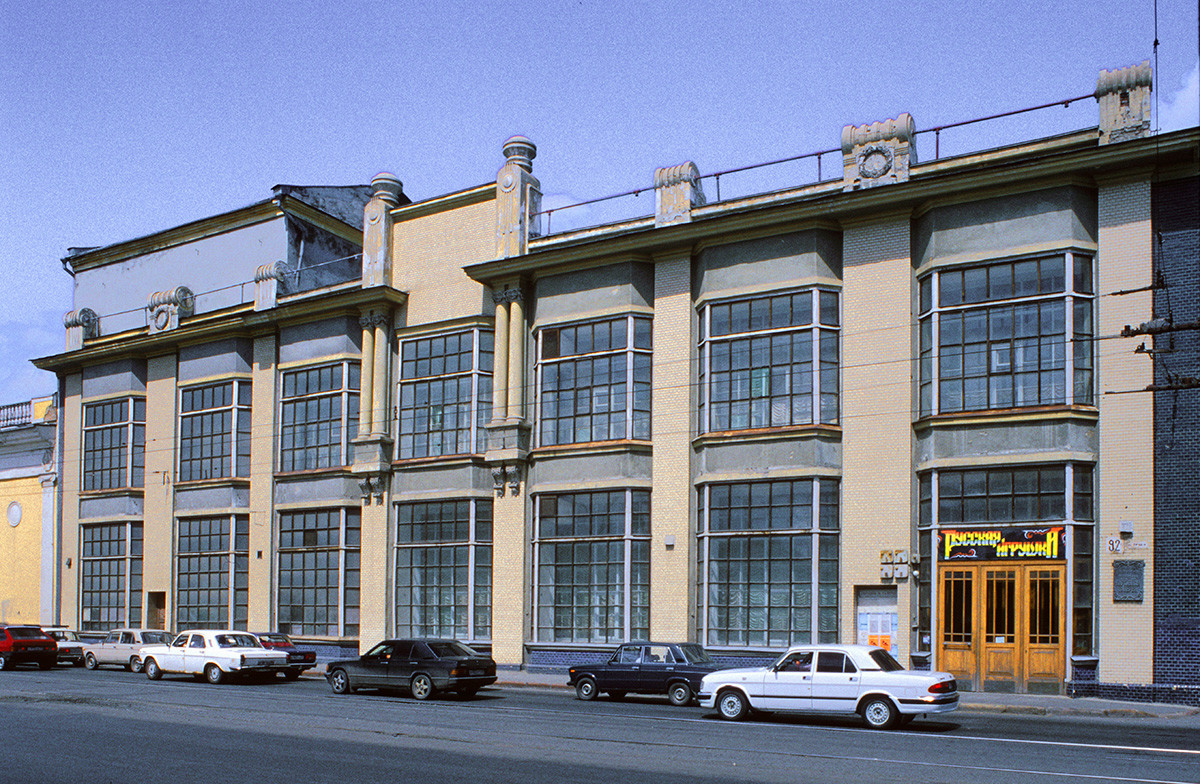 A giant tractor factory was intended to launch Soviet agriculture into the machine age, and with the addition of a metallurgical plant, Chelyabinsk joined Magnitogorsk in producing steel and steel products. As a sign of the new age, administrative buildings and housing projects arose in a functional Soviet style. 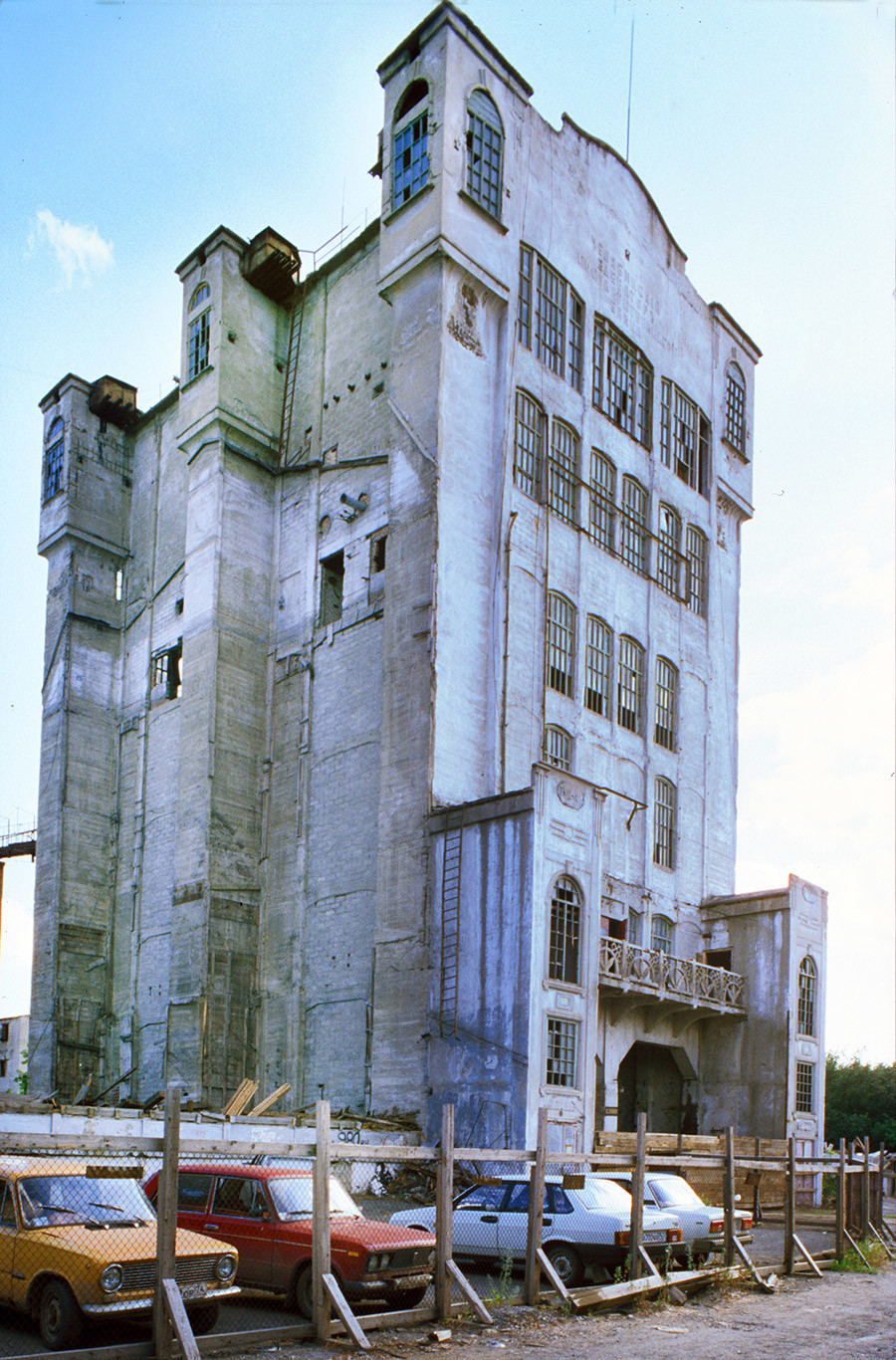 With the outbreak of war on the Eastern front in June 1941, many military-industrial plants from the western Soviet Union were evacuated to Chelyabinsk, and local factories were reconfigured to produce weapons. The converted tractor factory produced tanks in such numbers that it became known as “Tankograd” (Tank City).

With the reconstruction of the country after the war, demand increased for Chelyabinsk steel and machinery. The region also became a center for research and production of atomic weapons. 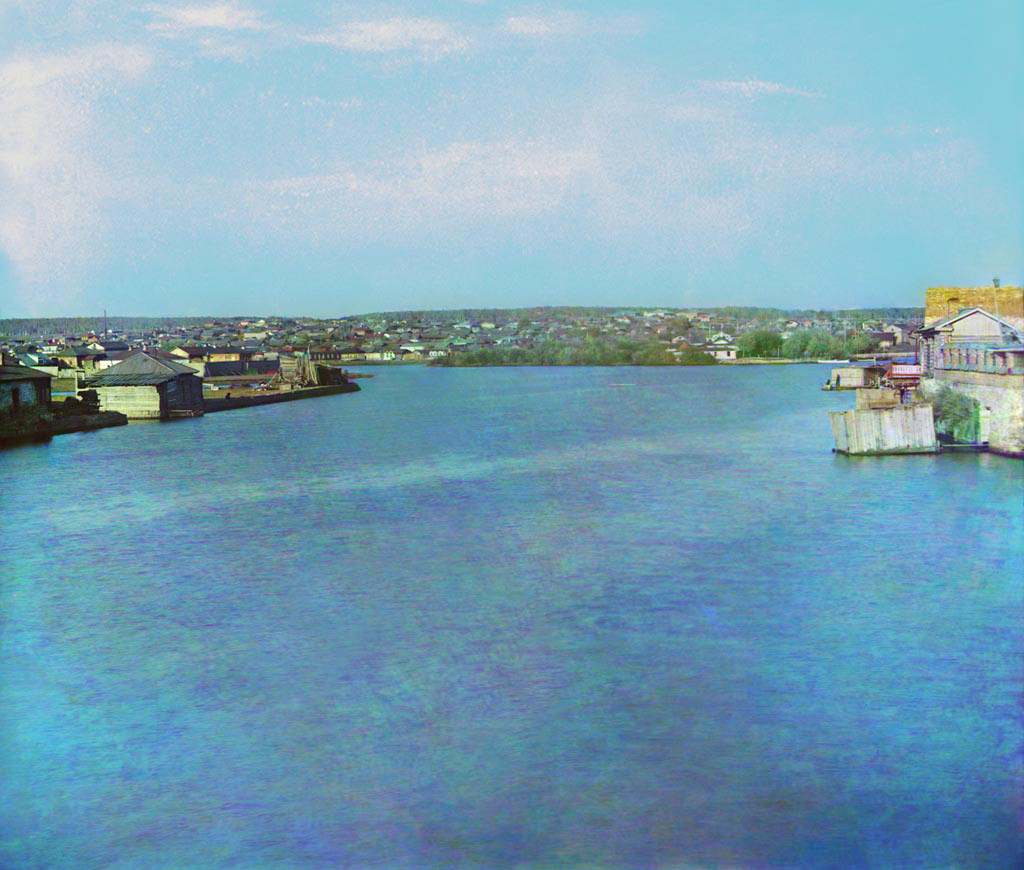 This industrial, technological and military surge came at a price, as Chelyabinsk gained a reputation as one of the most polluted cities in the Soviet Union. In 1957, nuclear waste stored at the Mayak atomic facility located 45 miles northwest of Chelyabinsk exploded in one of the worst such catastrophes before Chernobyl. 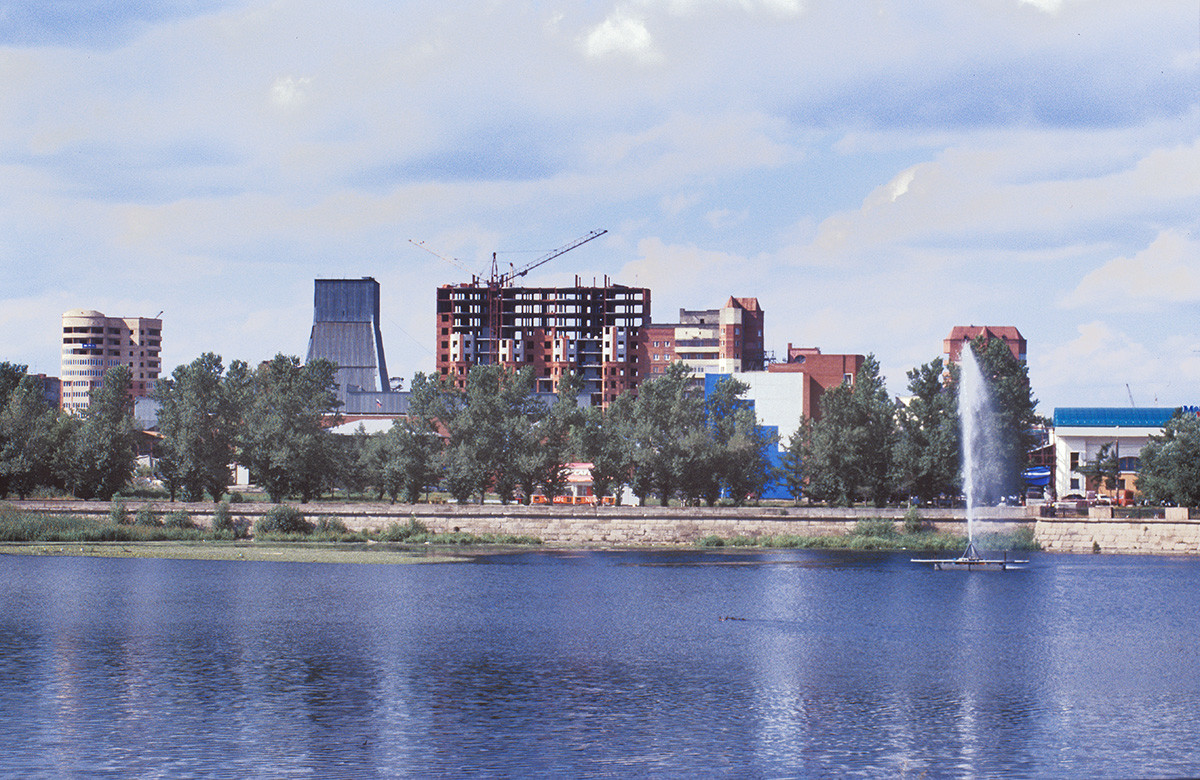 In the 1990s, Chelyabinsk and its heavy industry experienced severe financial challenges. With sardonic humor, locals noted that at least the air was easier to breath. The economic situation has now rebounded. The Chelyabinsk Metal Plant — part of the global Mechel Company — and the city’s tractor factory once again employ thousands. 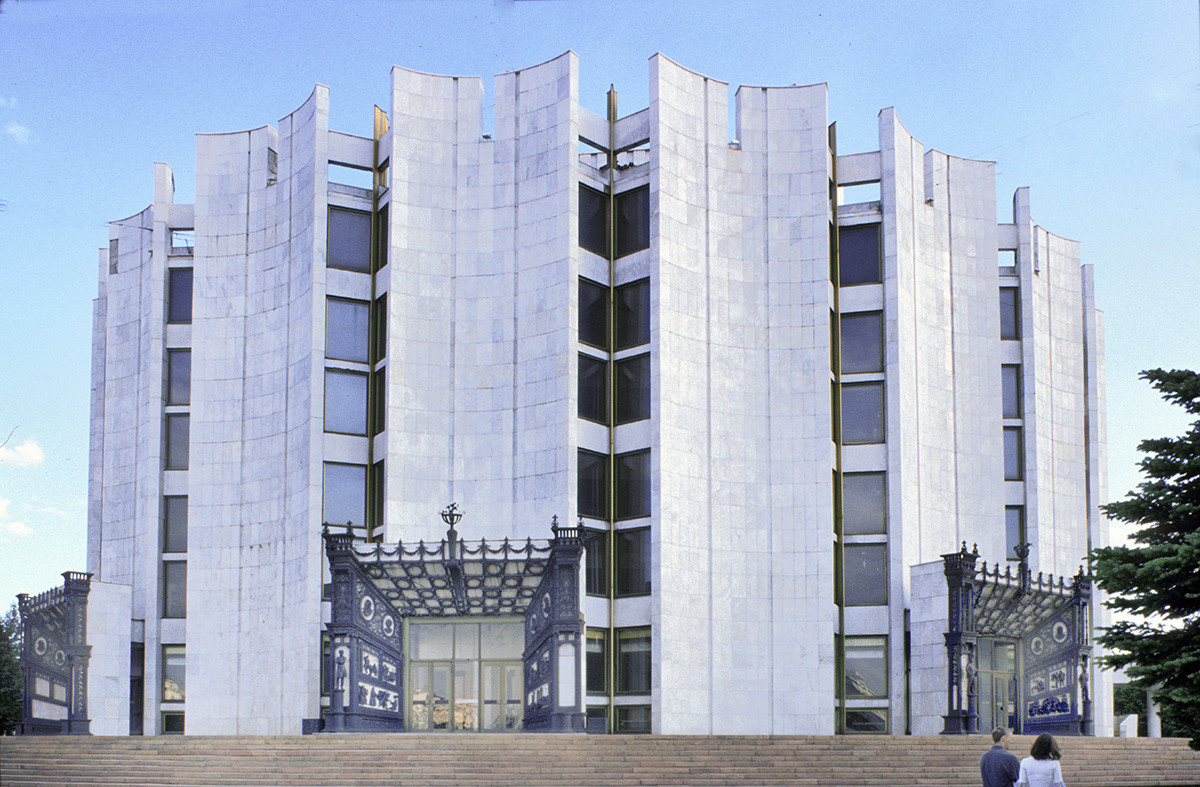 The city’s many institutions of higher education — led by South Urals State University and Chelyabinsk State University ­— have contributed greatly to this recovery. Chelyabinsk is also the seat of both a metropolitanate and a bishopric of the Russian Orthodox Church. The bustling red brick town that Prokudin-Gorsky photographed from the Miass River has managed to reunite its cultural and spiritual heritage with contemporary development. 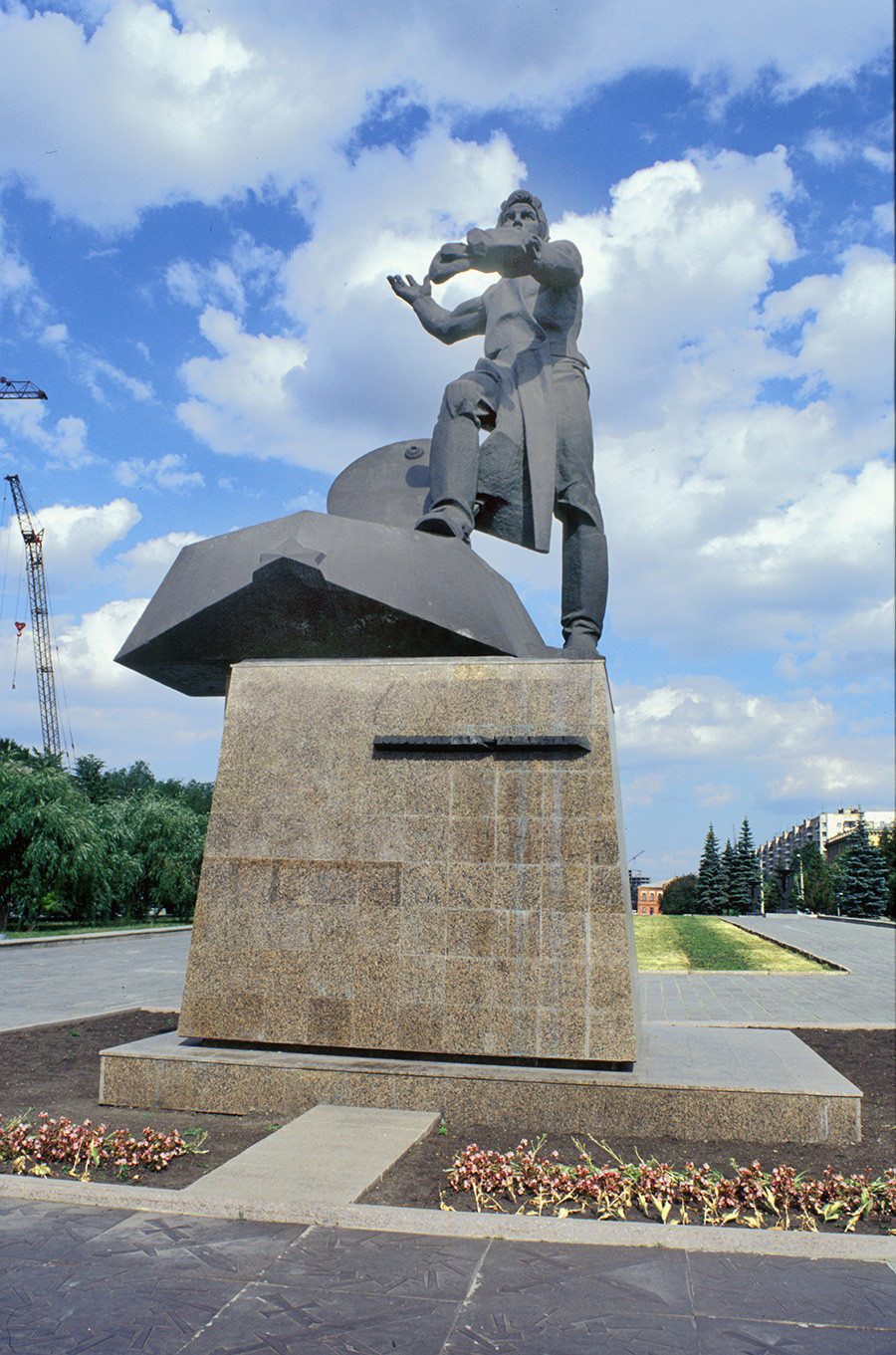 Monument to Chelyabinsk volunteers who joined the Urals Volunteer Tank Corps. Formed in 1943, the tank troops fought their way from Oryol to Berlin. Sculptor: Lev Golodnitsky. Unveiled in May 1975. July 13, 2003.

In the early 20th century the Russian photographer Sergei Prokudin-Gorsky devised a complex process for color photography. Between 1903 and 1916 he traveled through the Russian Empire and took over 2,000 photographs with the process, which involved three exposures on a glass plate. In August 1918, he left Russia and ultimately resettled in France with a large part of his collection of glass negatives. After his death in Paris in September 1944, his heirs sold the collection to the Library of Congress. In the early 21st century the Library digitized the Prokudin-Gorsky Collection and made it freely available to the global public. A number of Russian websites now have versions of the collection. In 1986 the architectural historian and photographer William Brumfield organized the first exhibit of Prokudin-Gorsky photographs at the Library of Congress. Over a period of work in Russia beginning in 1970, Brumfield has photographed most of the sites visited by Prokudin-Gorsky. This series of articles will juxtapose Prokudin-Gorsky’s views of architectural monuments with photographs taken by Brumfield decades later.