Kasli in the Ural Mountains: The art of sculpting in iron 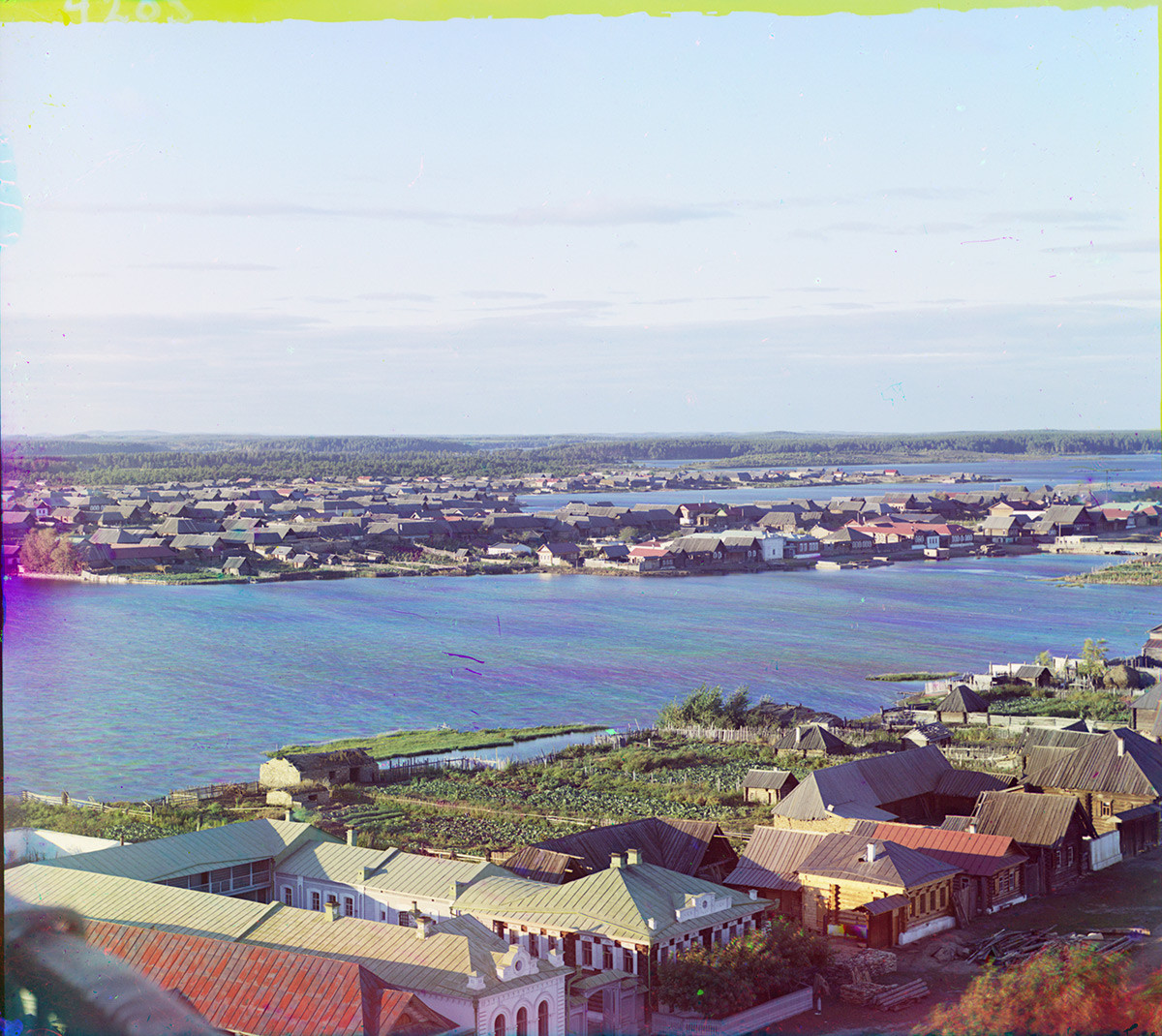 Approximately midway between the Ural mountain cities of Chelyabinsk and Ekaterinburg is the factory town of Kasli, picturesquely situated between Large Kasli Lake and Lake Irtyash.

In 1909, Russian photographer and chemist Sergei Prokudin-Gorsky visited Kasli on his first trip to the Ural mountains. The journey was part of an expansion of his project to photograph the diversity of the Russian Empire in the early 20th century.

In May of that year, Emperor Nicholas II invited Prokudin-Gorsky to the imperial residence at Tsarskoe Selo to show his images of Russia through an elaborate projector. Following this presentation, the photographer gained the patronage of the imperial court to continue his travels, thus accelerating the pace and the scope of the work. On his journey to the Urals, Prokudin-Gorsky took views ranging from untrammeled nature to large factories over a vast area that extended from Perm to Ekaterinburg to Chelyabinsk. 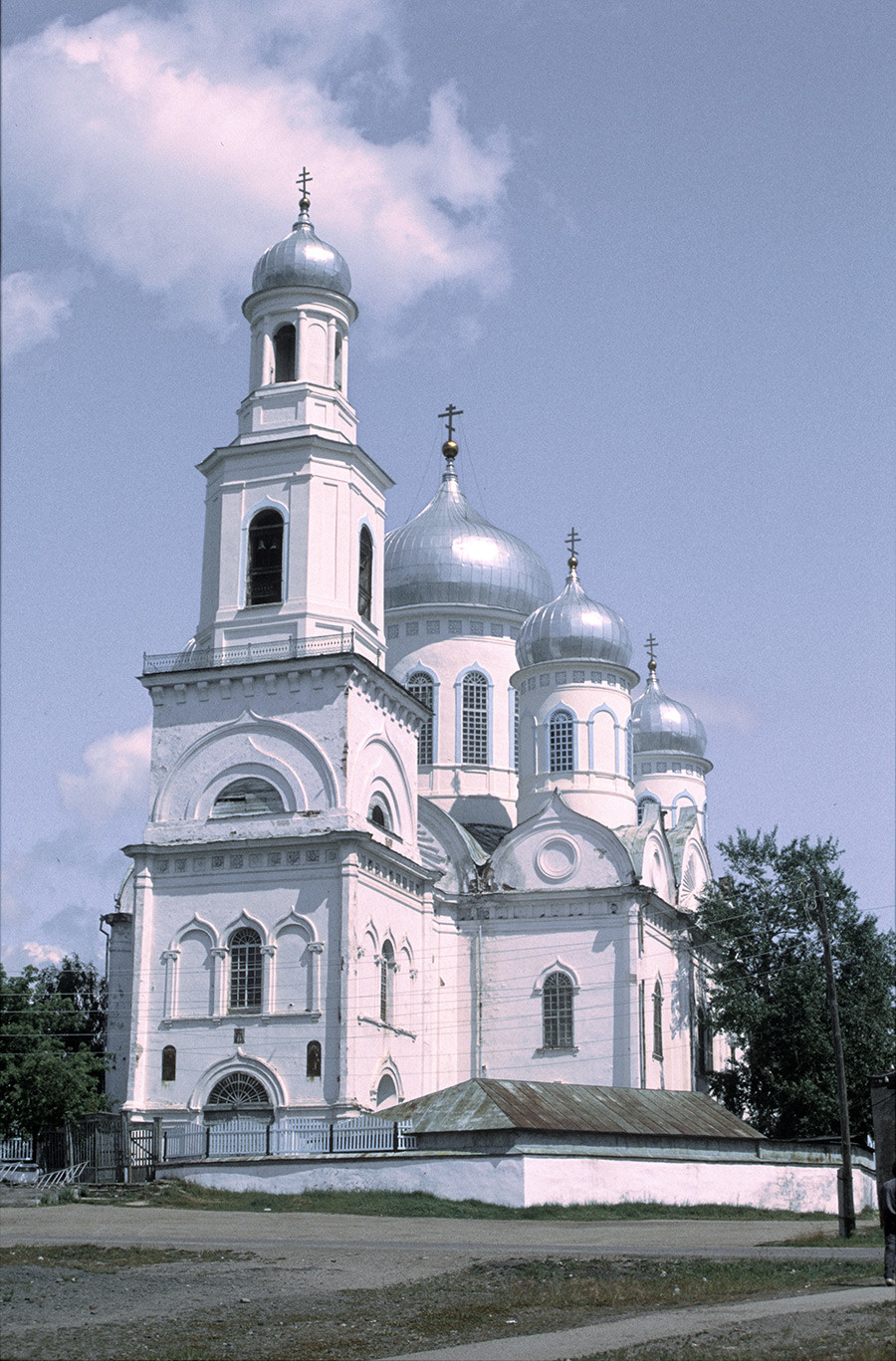 Prokudin-Gorsky’s stunning panoramas of Kasli, taken from the Dormition Church bell tower (shadow visible), shows well-built houses with spacious garden plots, By the time of my visit in 2003, the bell tower had long since been demolished (1930s).

Beginning of an iron empire 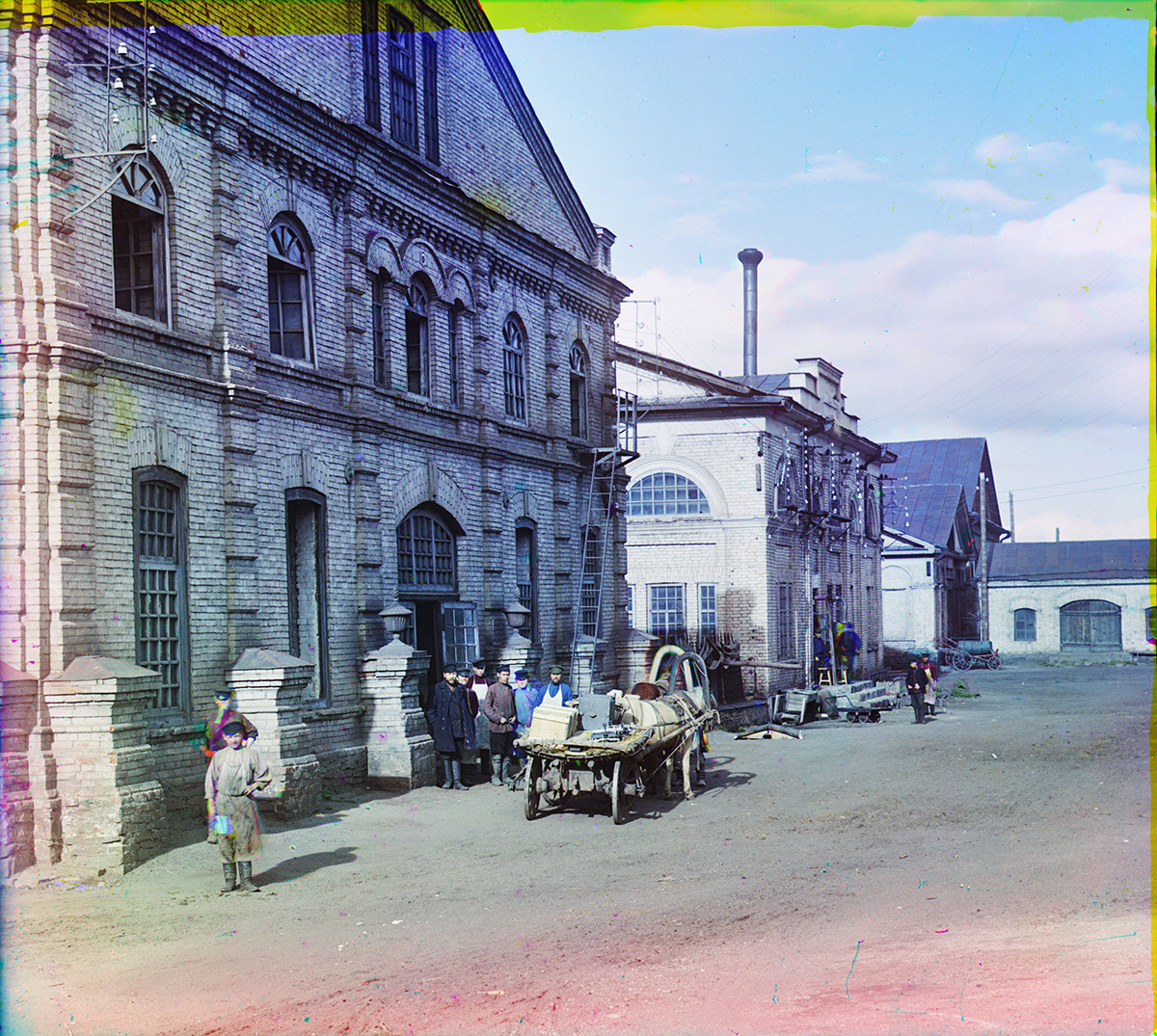 The territory around Kasli, including the Large and Small Kasli Lakes, had traditionally been settled by the Bashkir people. The Kasli settlement was founded in 1747 on land acquired by the merchant Yakov Korobkov to create an ironworks. The region not only had rich mineral deposits and ample forests (felled to produce charcoal for the smelting furnaces), but also high-quality sand necessary to form precise and durable molds for shaping the molten iron.

The factory began producing pig iron and cast iron in the late summer of 1749. Products were carted to the Ufa River, which ultimately connected with the Volga basin in Russia’s heartland.

Following a lawsuit over mineral rights, Korobkov sold the enterprise in 1751 to Nikita Demidov (1688-1758), youngest son of the elder Nikita Demidov, founding patriarch of Russia’s most notable clan in metallurgy. Through purchases from the local Bashkirs, Nikita Demidov expanded the factory’s land holdings, which reached a size greater than contemporary Belgium. 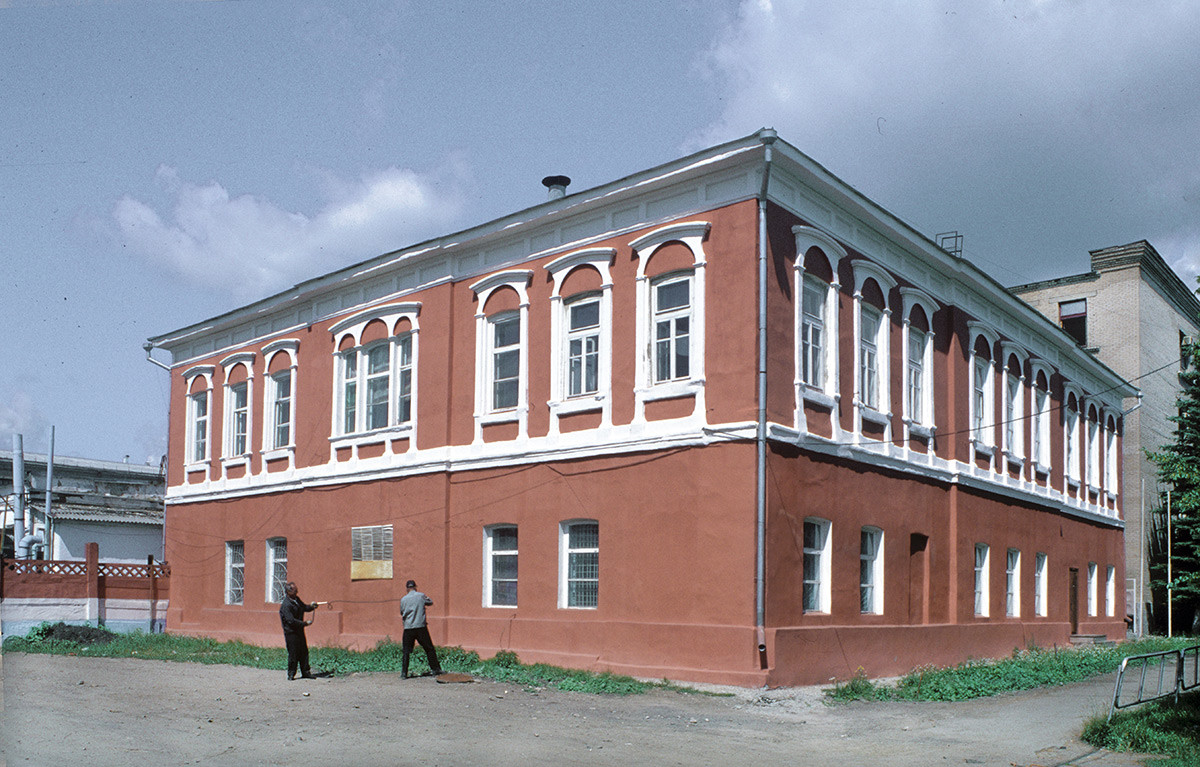 After his death the factory was inherited by the fourth of his sons—also Nikita—who died childless in 1804. Soon thereafter, the Kasli works was acquired by the Ekaterinburg entrepreneur Lev Rastorguev (1769-1823),

By the early 19th century the Kasli works—whose products were already known for their detail and quality—began to explore the uses of cast iron as an artistic sculptural medium under the direction of Grigory Zotov, one of the most accomplished Urals factory directors. During this period the factory produced iron architectural details, as well as bronze castings.

The Kasli factory’s reputation as an artistic center was enhanced by the hiring of graduates of the Imperial Academy of Arts such as Mikhail Kanaev and Nicholas Bach, both of whom made fundamental contributions to a Kasli school of sculpture. The factory also specialized in reproductions of work by Peter Klodt, one of 19th-century Russia’s most famous sculptors. 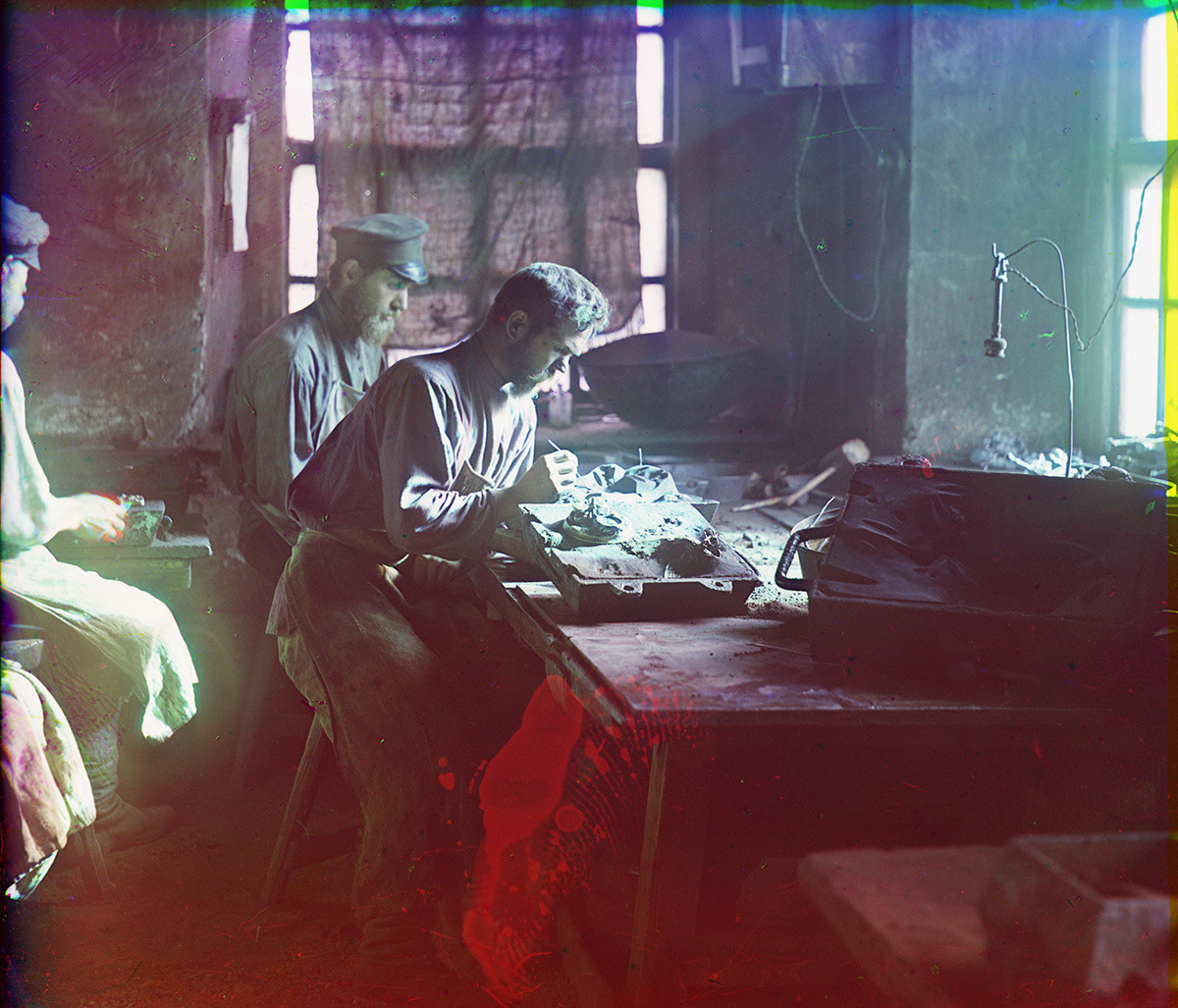 During the second half of the 19th century the factory achieved international fame and exposition awards for its cast iron work, including large free-standing structures. The Kasli sculptural style was characterized by a lively interplay of forms, often with intricate decorative motifs. The statues were typically finished with a deep carbon black coating. Prokudin-Gorsky photographed Kasli masters at work and examples of the casting art. 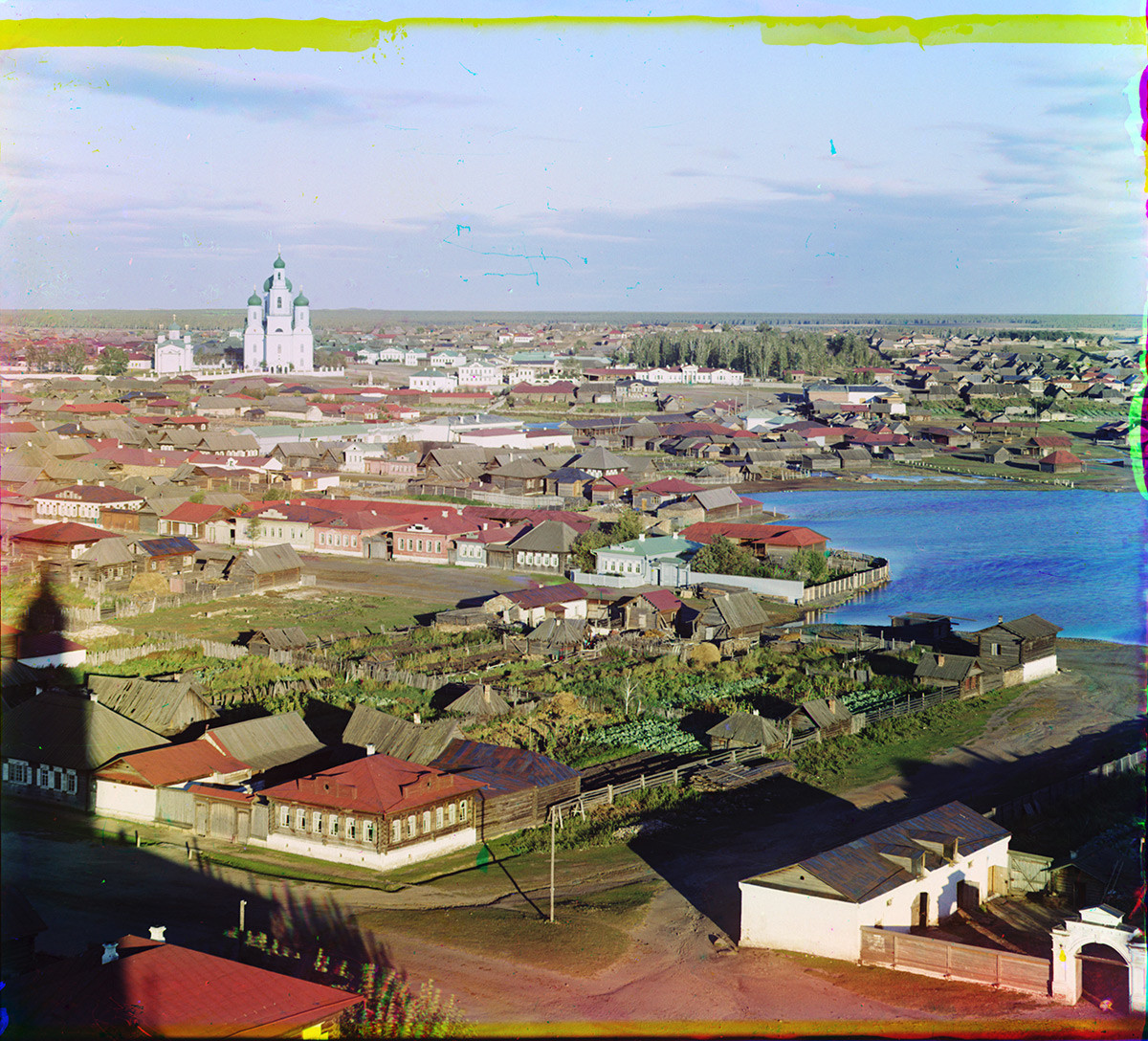 Kasli’s factory-based prosperity provided the means for the construction of    churches, of which the most imposing was the Church of the Ascension, designed by Ernst Sartorius, who served as chief architect of Ekaterinburg Territory in 1840-46. His design closely followed the Russo-Byzantine style created by the architect Constantine Thon and widely promoted during the reign of Nicholas I. (Thon’s most notable work was the Cathedral of Christ the Redeemer in Moscow). 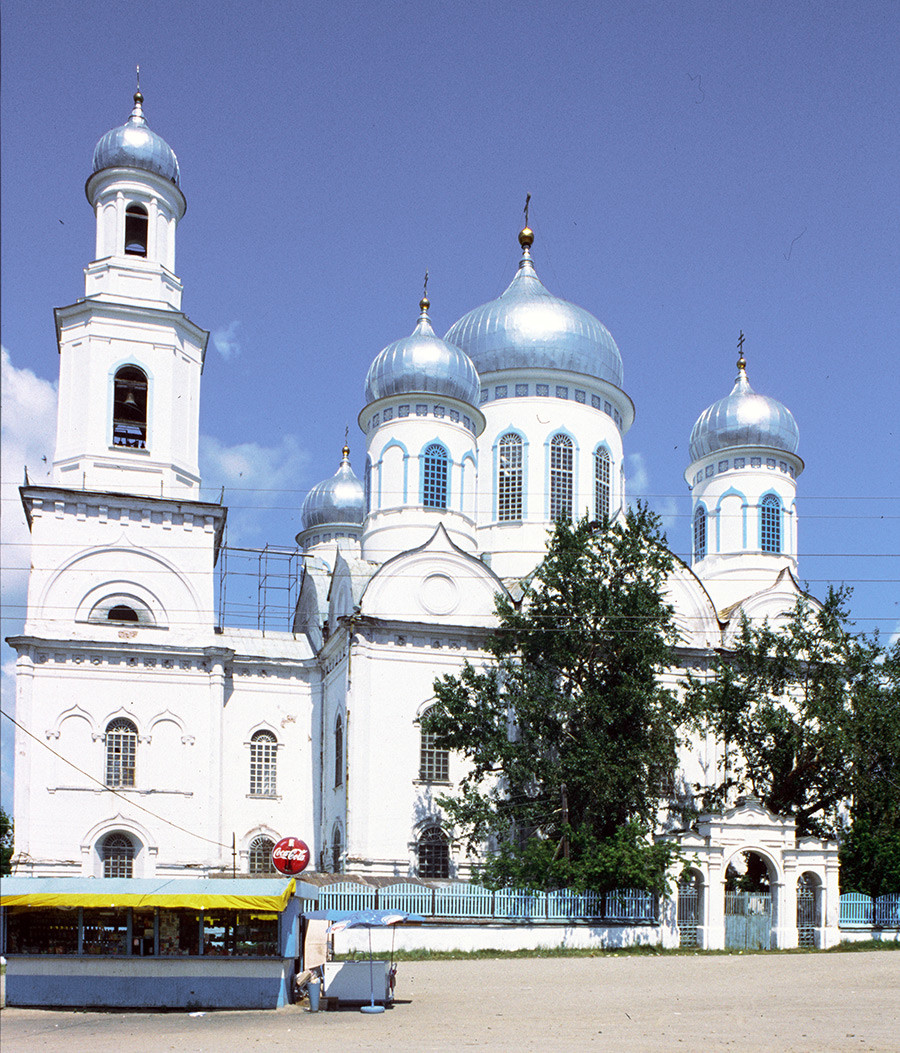 As typical in Russian Orthodoxy, the church had multiple altars, the first of which, dedicated to the Prophet Elijah, was consecrated on the south side of the church in 1852. Altars dedicated to the Ascension and to the early Greek cleric St. Charalambos (on the north side) were consecrated in 1855. Funds for the large project came from wealthy local donors and through a monthly one-ruble levy on the factory workers’ pay.

In 1858, work began just to the north on a much smaller Church of St. Nicholas, completed in 1861. Because its compact size could be more easily heated in the severe winters, it served as the “winter church” for its larger companion.

This pair of churches, with west facades brightly illuminated, appears in three of Prokudin-Gorsky’s distant views. As his photographs demonstrate, the towering Ascension Church occupies a dominant position in the largely wooden town. My photographs taken some nine decades later offer a closer view of this monumental 19th-century structure. 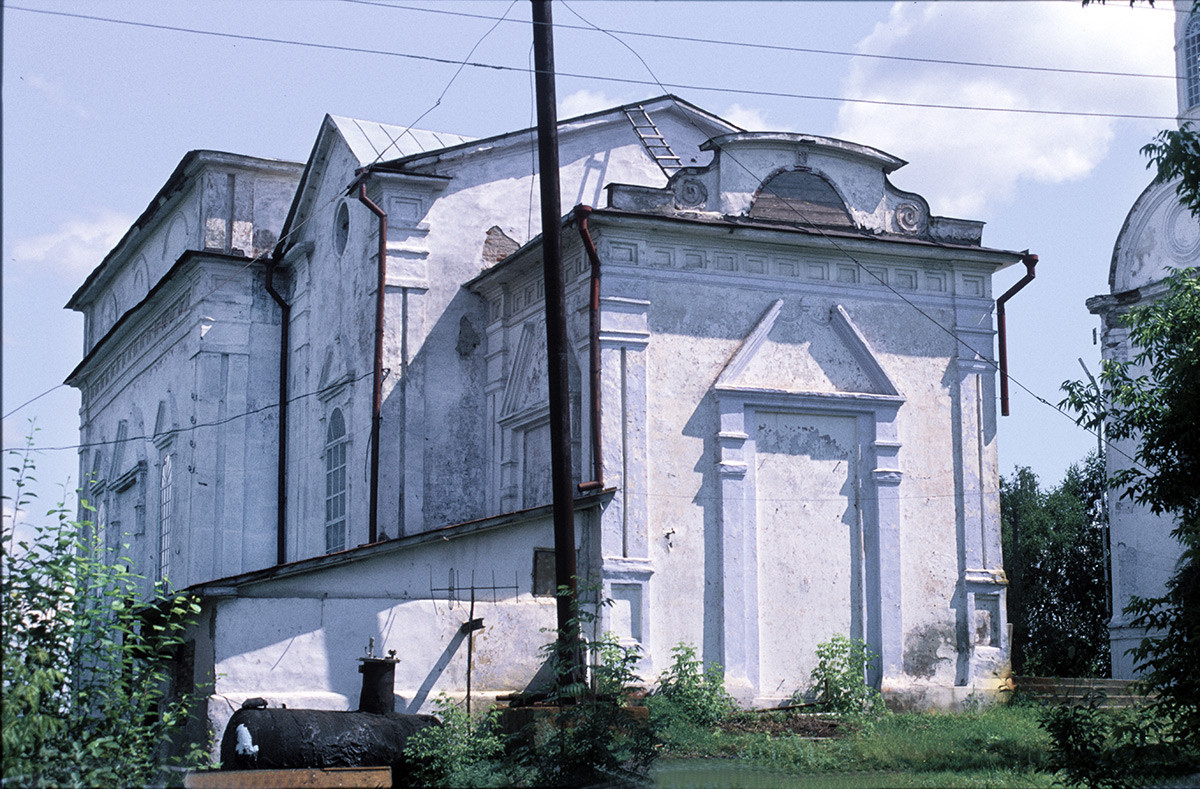 By the time of Prokudin-Gorsky’s visit, Kasli had three other churches. The oldest of these, dedicated to the Dormition, was built in 1777-85 by the younger Nikita Demidov. Its site had been occupied by a wooden church burned in the winter of 1774—along with most of Kasli—during the destructive frenzy of the Pugachev Rebellion that swept through the Urals and the middle Volga region in 1773-74.

Kasli also had a substantial community of Old Believers, Orthodox religious dissenters who refused to accept liturgical reforms promulgated by the official church during the latter half of the 17th century. Old Believers were valued in Urals factories for their sobriety and work ethic. In 1852 they gained their own church, also dedicated to the Dormition. 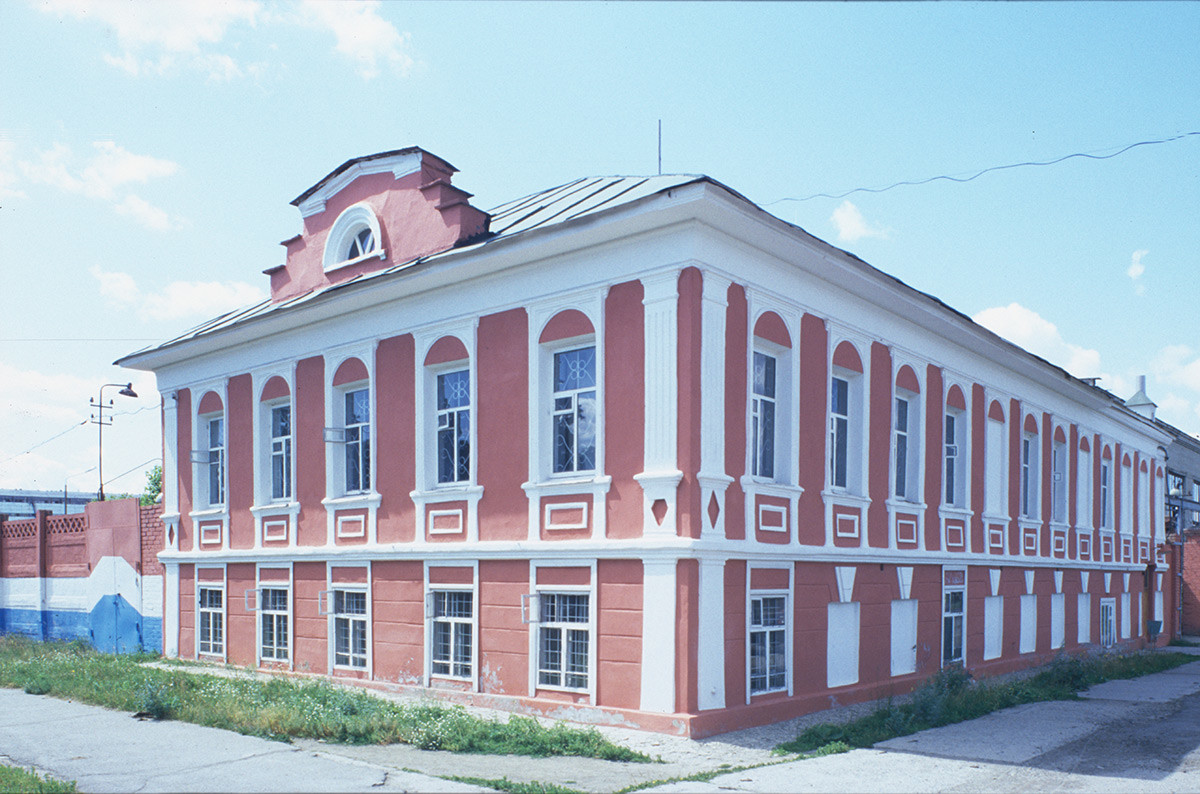 All five of the Kasli churches were closed in 1930. Most of them were either razed or lost distinctive components such as cupolas and bell towers. Fortunately, the Ascension Church suffered no structural damage and was reopened in 1944 as part of the wartime rapprochement between the Soviet regime and the Church. The Orthodox Church was supportive of the war effort, and it was noted that a functioning church led to an increase in worker productivity. 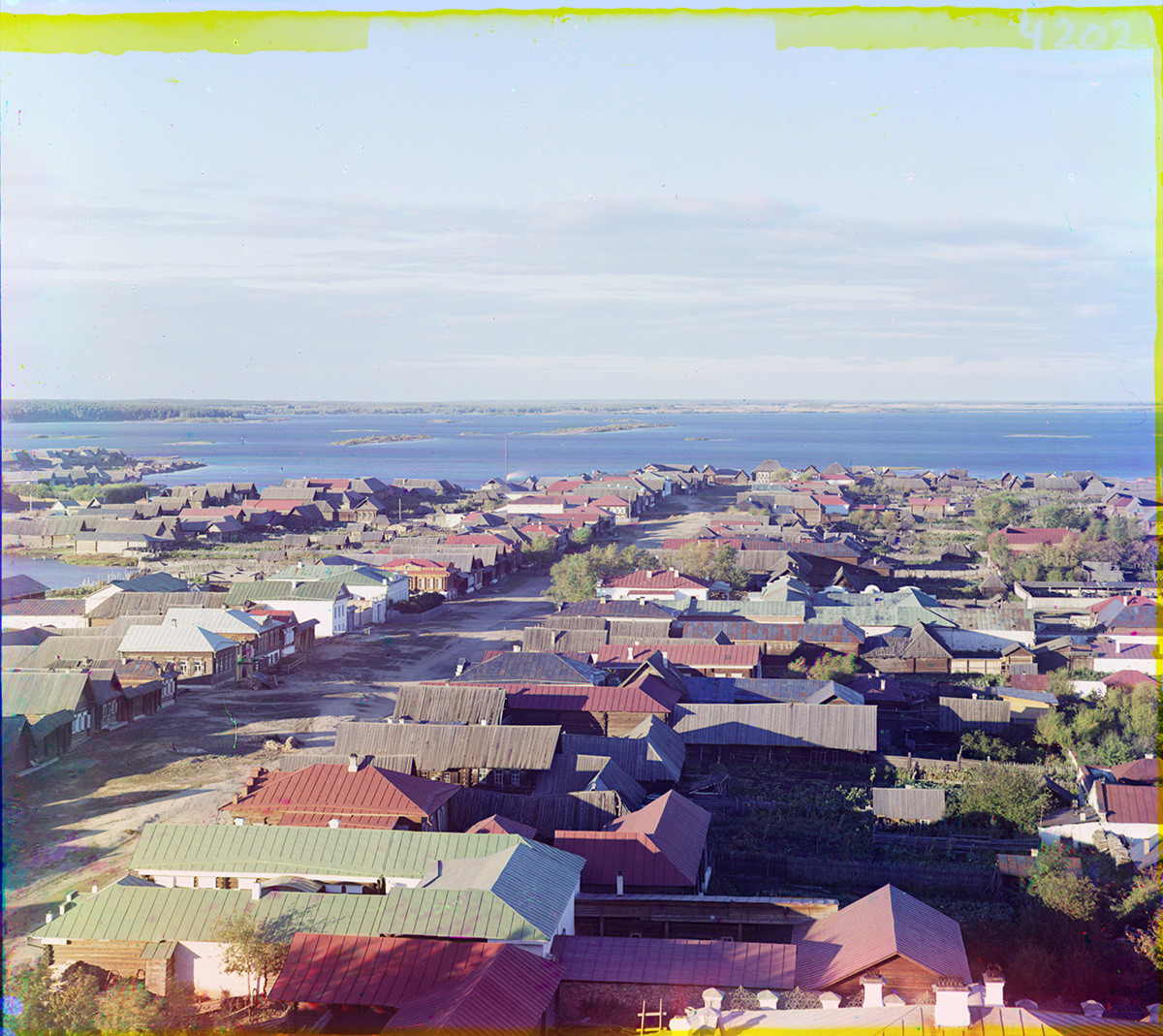 The Kasli panoramas are among Prokudin‑Gorsky’s richest. Taken in late afternoon light with deep shadows, they have endless detail. In one view a wooden house on a whitewashed brick foundation seems like a fortress, with its four-sloped red metal roof. the yard contains sheds for every need, including shelter for animals that sustained the household. 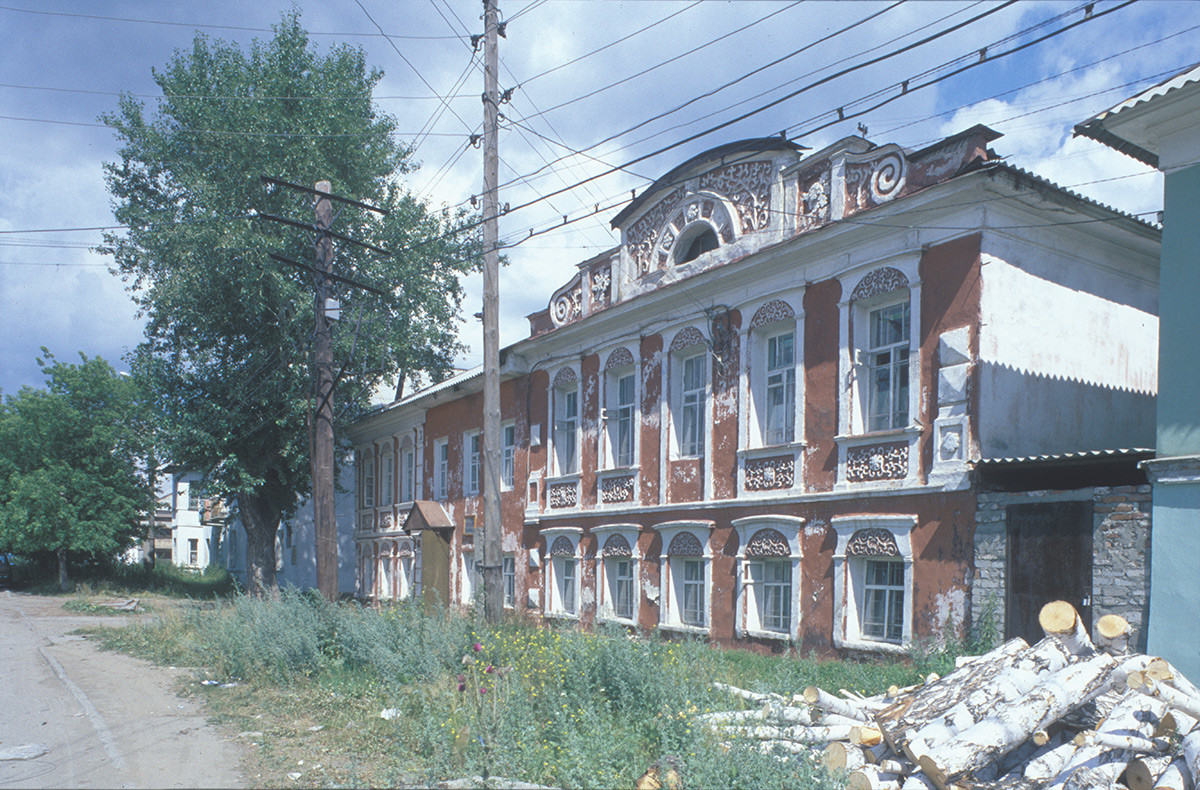 The bright green of vegetable plots shows the careful tending of cabbage and potatoes, essential staples. These photographs offer a microcosm of life in such Urals factory settlements, surrounded with fields, forests and boundless space. 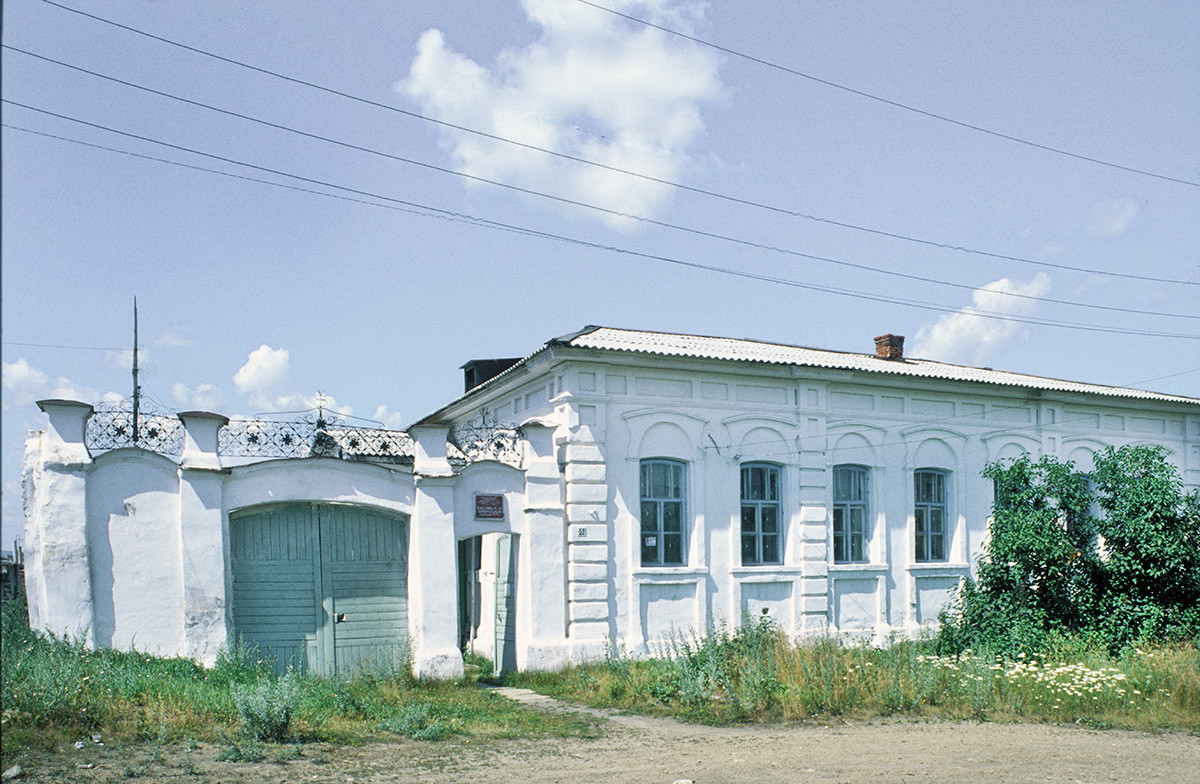 With the outbreak of the First World War and subsequent revolutionary upheavals, the Kasli traditions largely disappeared. Only in the decades following the Second World War was the Kasli style gradually reconstituted. 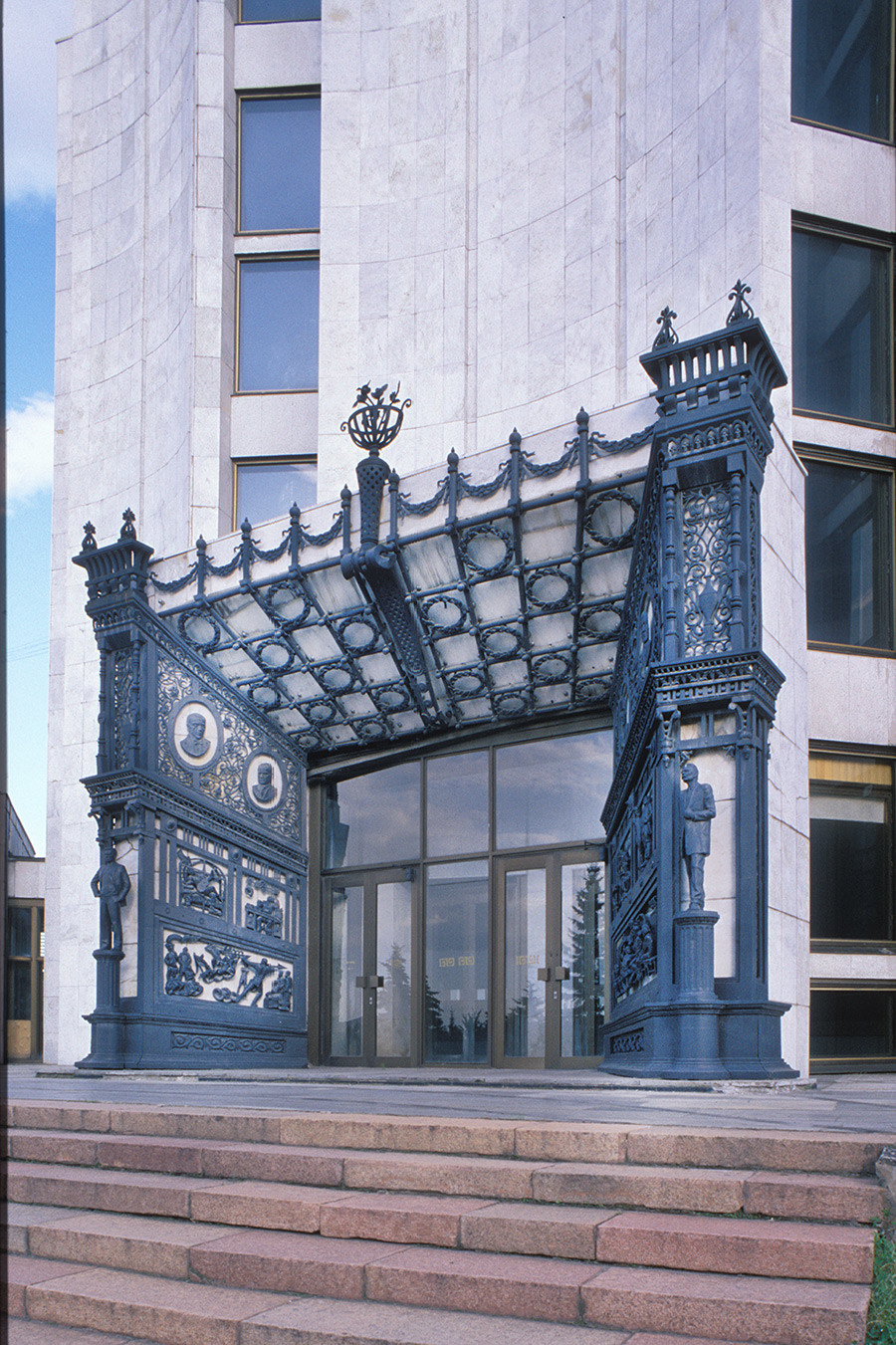 The Kasli Foundry is now part of the global corporation Mechel (headquartered in Moscow), and Kasli cast iron statuary is again in demand. A notable example is the main entrance of the Cheliabinsk Drama Theater (1973-82), which I photographed in 2002. The fantasy-like figures seem to defy the weight of the metal from which they spring. 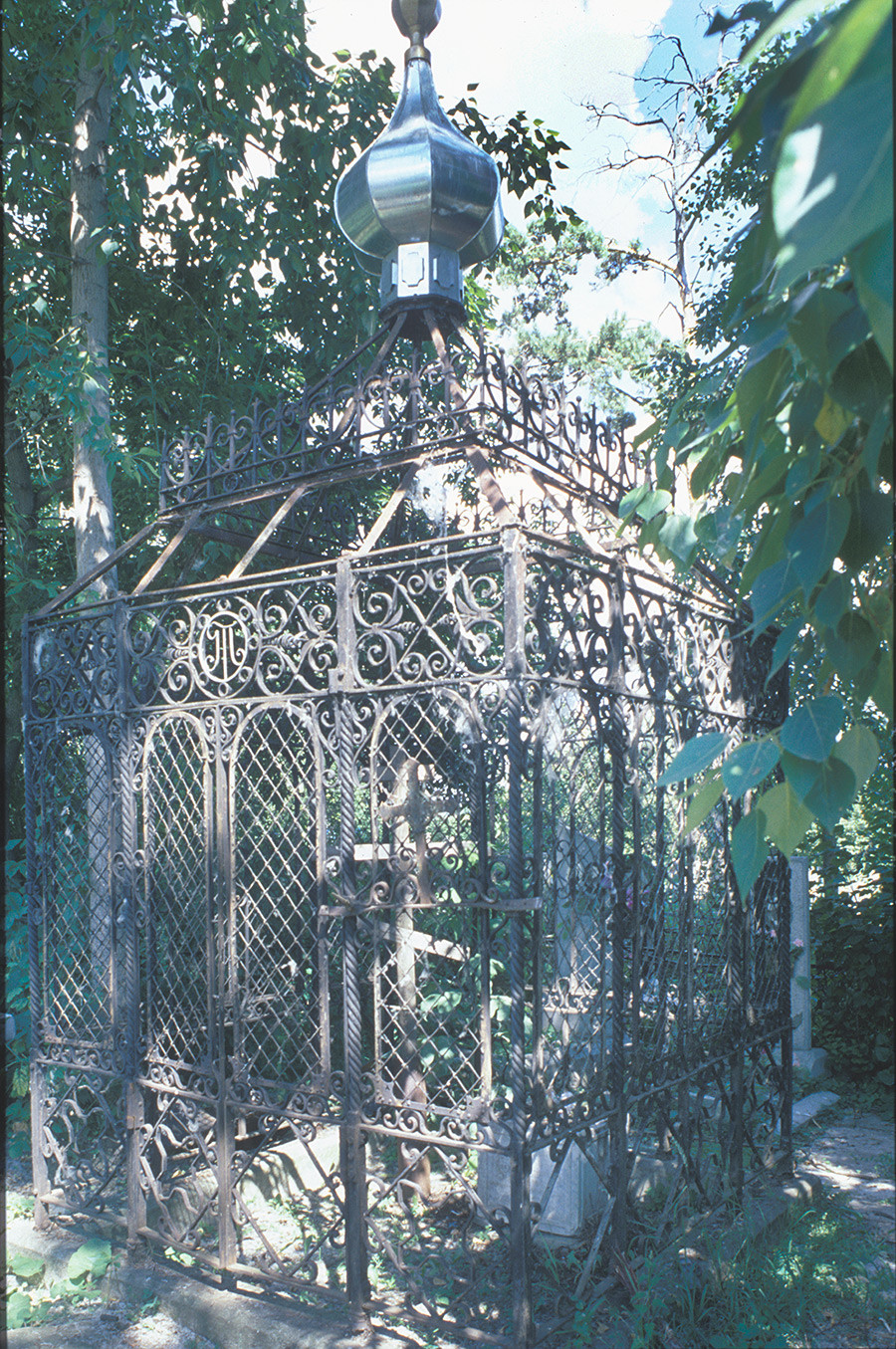