Convent of the Resurrection: A picturesque site with a dark history 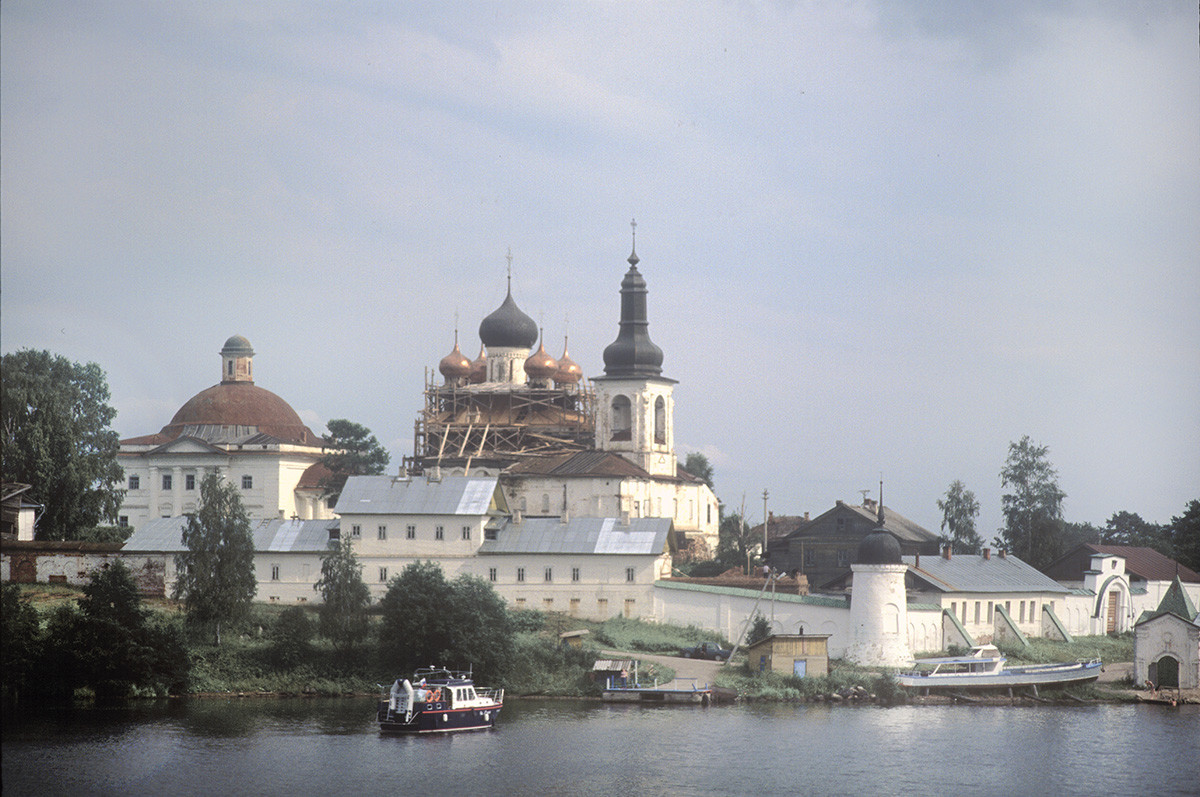 The Convent of the Resurrection sits picturesquely on the left bank of the Sheksna River near the village of Goritsy in the Vologda Region. In Summer 1909, the Russian photographer and chemist Sergei Prokudin-Gorsky photographed the convent from several angles during his journey along the Mariinsky Waterway system, which connects St. Petersburg to the Volga River basin. My photographs were taken over a period from 1991 to 2007. 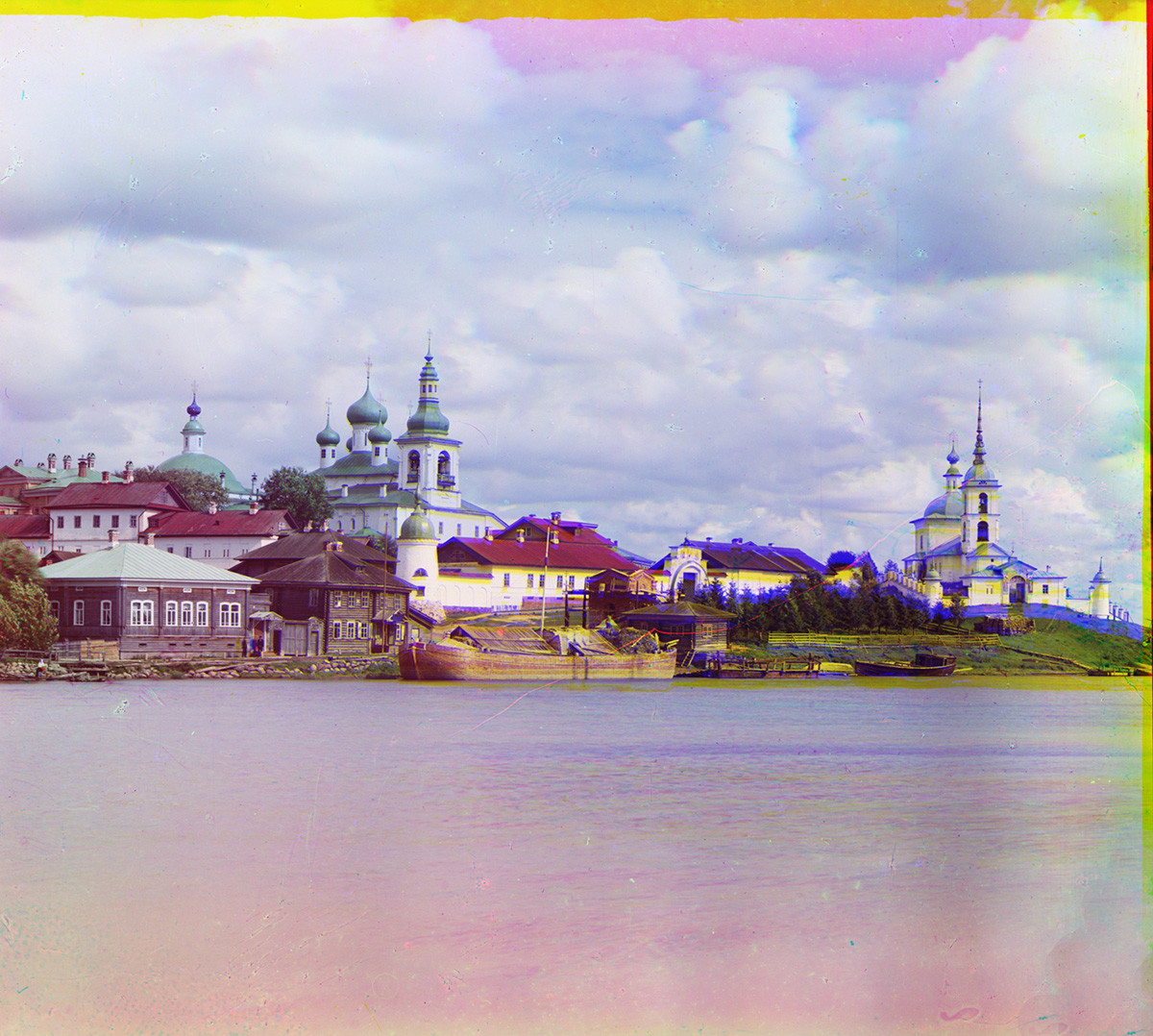 Site of exile and martyrdom

Founded in 1544, the Resurrection Convent played a dark role as place of exile for several women of high birth. Its founder, Princess Efrosinya Andreevna (1516-69), was the wife of Andrei Ivanovich of Staritsa, the uncle of Tsar Ivan IV (the Terrible) and one of Muscovy’s last appanage princes. After Andrei’s death in 1537, Efrosinya assumed an important role in Muscovite court politics. 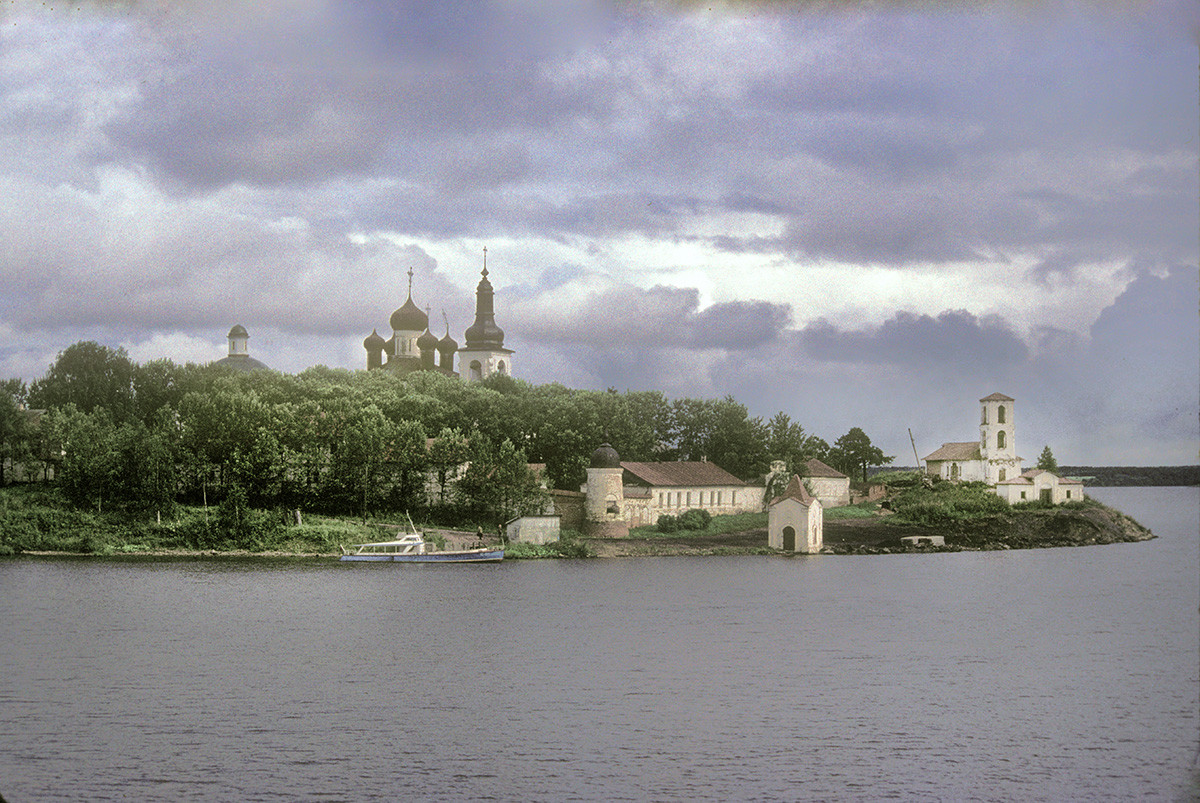 In 1553, Ivan the Terrible fell ill and seemed to be on his death bed. Efrosinya became involved in a conspiracy to place her son Vladimir Andreevich Staritsky on the throne instead of Ivan’s son Dmitry. The plot was quelled, however, and Ivan himself recovered, defying all expectations. Even though the Staritsky family continued to serve Ivan loyally, the tsar remained suspicious of them, and Staritsky family and in 1563, Efrosinya and her son Vladimir fell into disfavor and were denounced. She was exiled to the convent and made to become a nun with the monastic name Evdokia, although she retained a number of privileges. 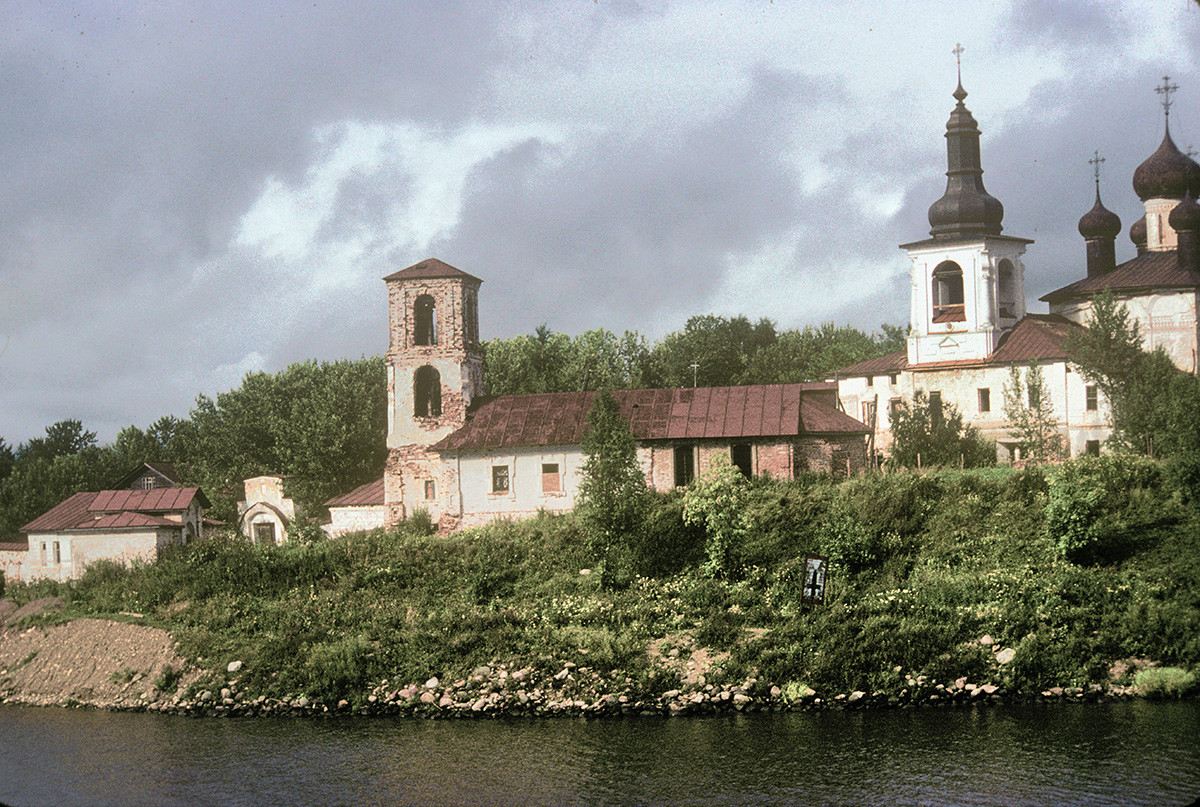 Among her companions was the nun Alexandra, previously known as princess Yuliana Paletskaya. She was married to Ivan the Terrible’s feeble-minded younger brother Yury, prince of Uglich, and was peripherally involved in the 1553 conspiracy.

After Yury’s death in 1563, Yuliana accepted monastic vows at Moscow’s Novodevichy Convent and maintained considerable privileges. The following year, however, Ivan had her exiled to the convent at Goritsy. 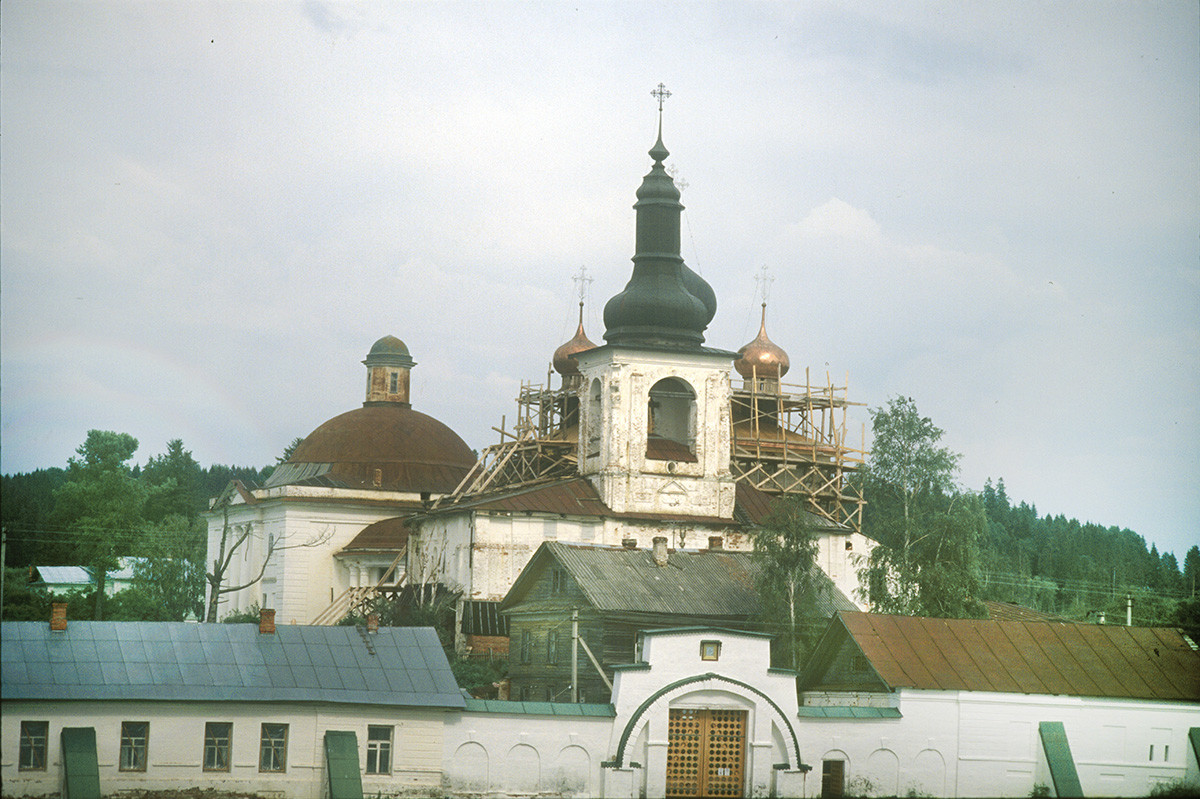 Catastrophe ensued in October 1569, when Vladimir Staritsky and his family were killed on Ivan's orders.  Ordered back to Moscow following Vladimir’s death in October, Evdokiya was drowned in the Sheksna and all members of her retinue were massacred. Alexandra was also drowned at the same time on Ivan’s order.

As Russia experienced still further turbulence during the Time of Troubles (1584-1613), other women were exiled to the convent. Among them were Anna Koltovskaya (monastic name Darya; fourth wife of Ivan the Terrible) and Mariya Nagaya (monastic name Martha), Ivan's seventh wife and the mother of the ill-fated Prince Dmitry of Uglich. This list also includes tsarevna Kseniya Godunova, daughter of Tsar Boris Godunov. 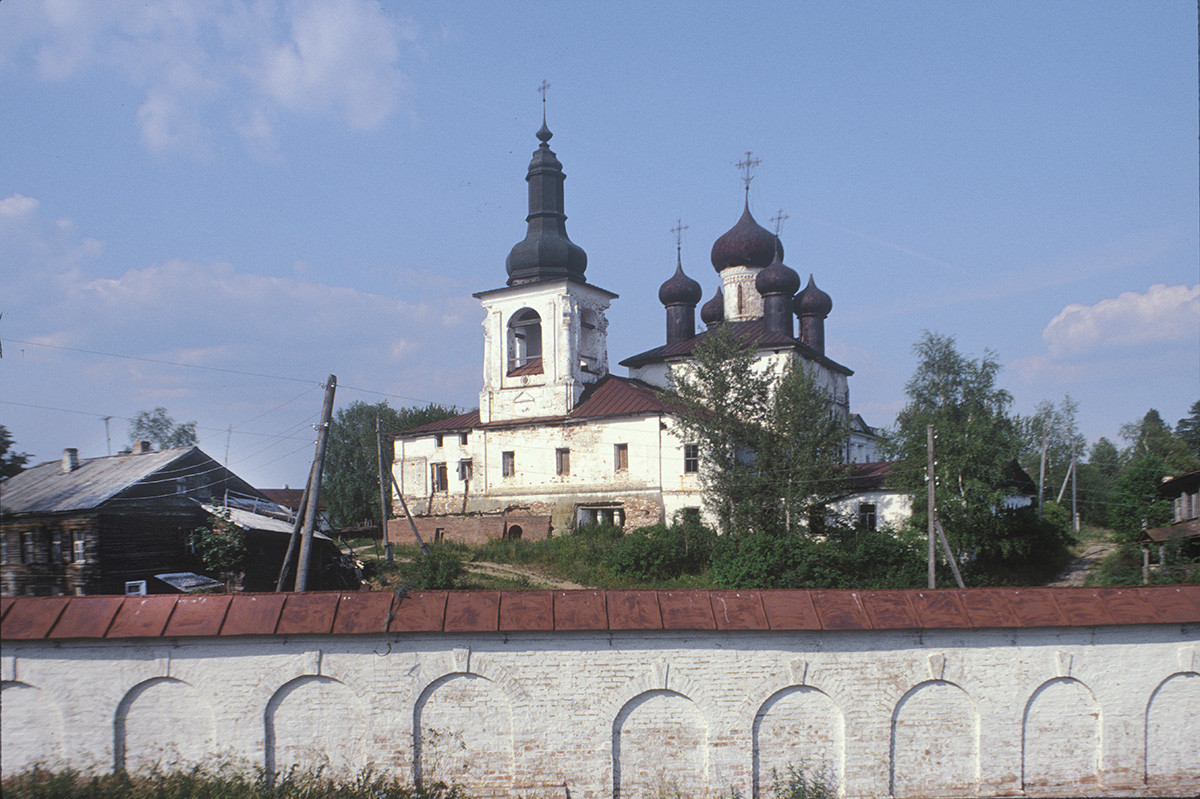 Despite these grim associations, the convent survived and benefited from the endowments provided by its noble monastics. Gradually it gained the ensemble of landmark structures so admirably displayed from the river.

The earliest and most significant of these shrines is the Resurrection Cathedral, endowed by Efrosinya and completed in 1549. Its monumental form is comparable to other churches of the same period, such as the Dormition Cathedral at St. Kirill Belozersky Monastery. Both cathedrals acquired a number of attached chapels with their own altar dedications, a traditional Russian practice. 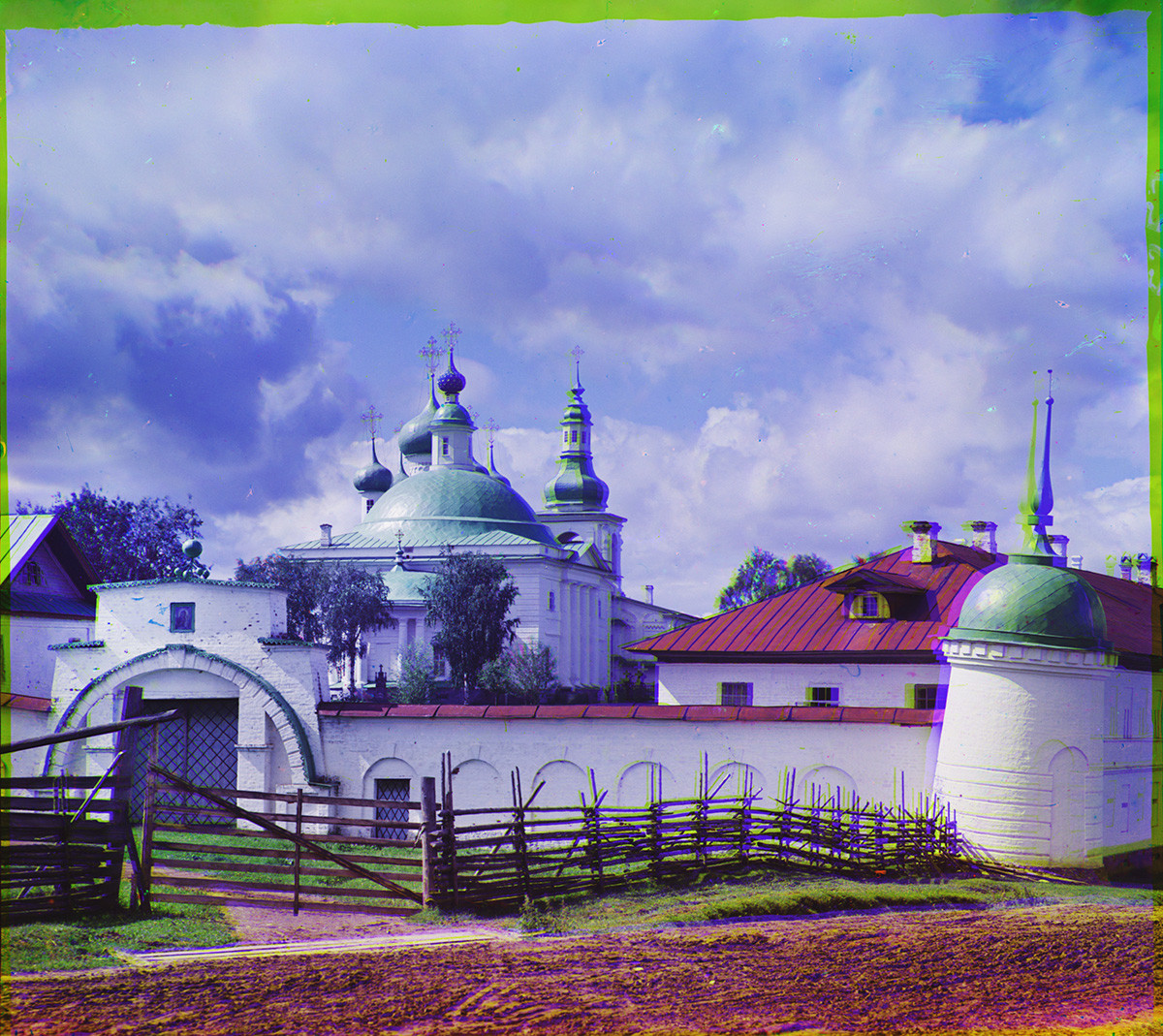 In 1611, a brick bell tower was constructed with the support of the nun Martha, previously known as Tsaritsa Ksenia Romanova, mother of the first Romanov tsar, Michael. The bell tower was substantially rebuilt in a baroque manner in the 18th century.

For over three centuries the Resurrection Convent had a distinctive organization in which the nuns – who often had substantial means – were expected to maintain individual domiciles, as opposed to the typical dormitory-cloister arrangement. With the decline of its wealth in the late 18th century, the convent waned until it was revived along more traditional lines in the early 19th century. 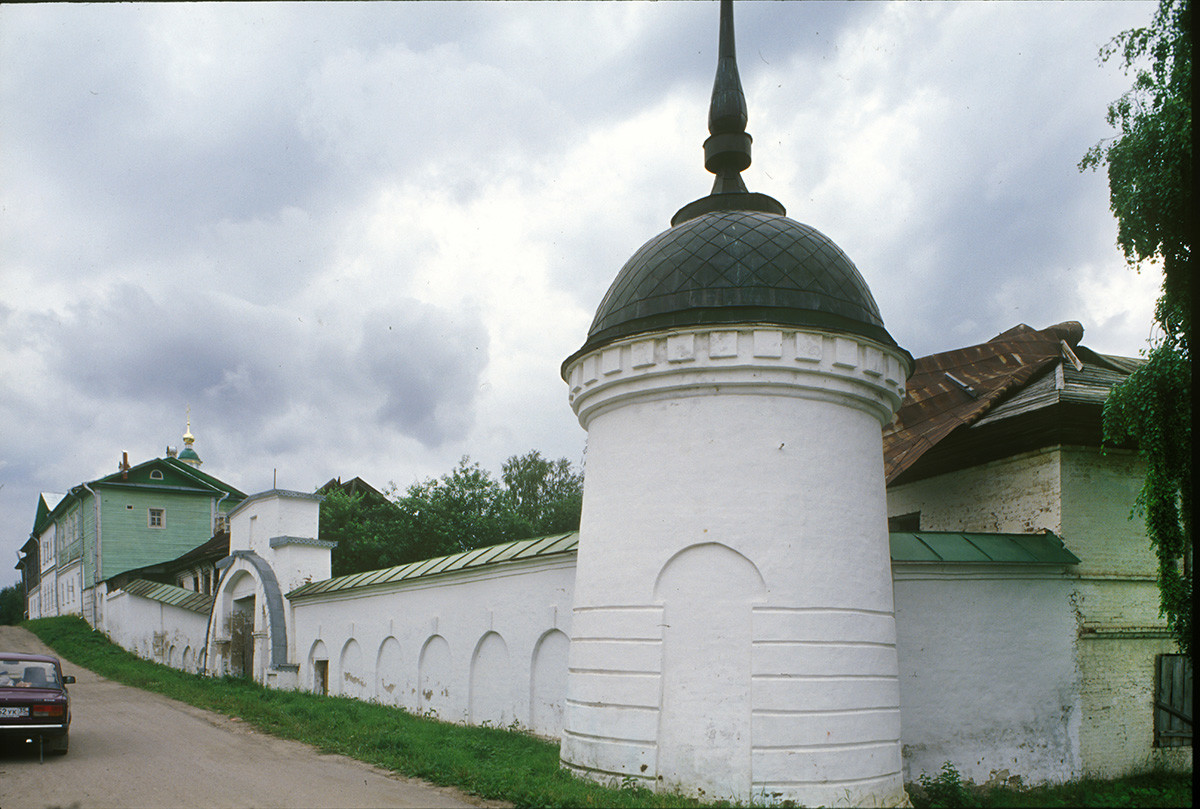 Most of the extant structures in the convent date from this later period, including the Trinity Cathedral, erected in 1821 on the site of the graves of the martyred nuns Evdokia and Alexandra. Designed in a massive late neoclassical style with porticos, the structure was crowned with a single large dome.

During the same period, the convent’s walls were rebuilt in brick with round corner towers. Cloisters and other facilities are closely integrated with the walls, and in 1832, a church dedicated to the Intercession of the Virgin was built over the east gate. 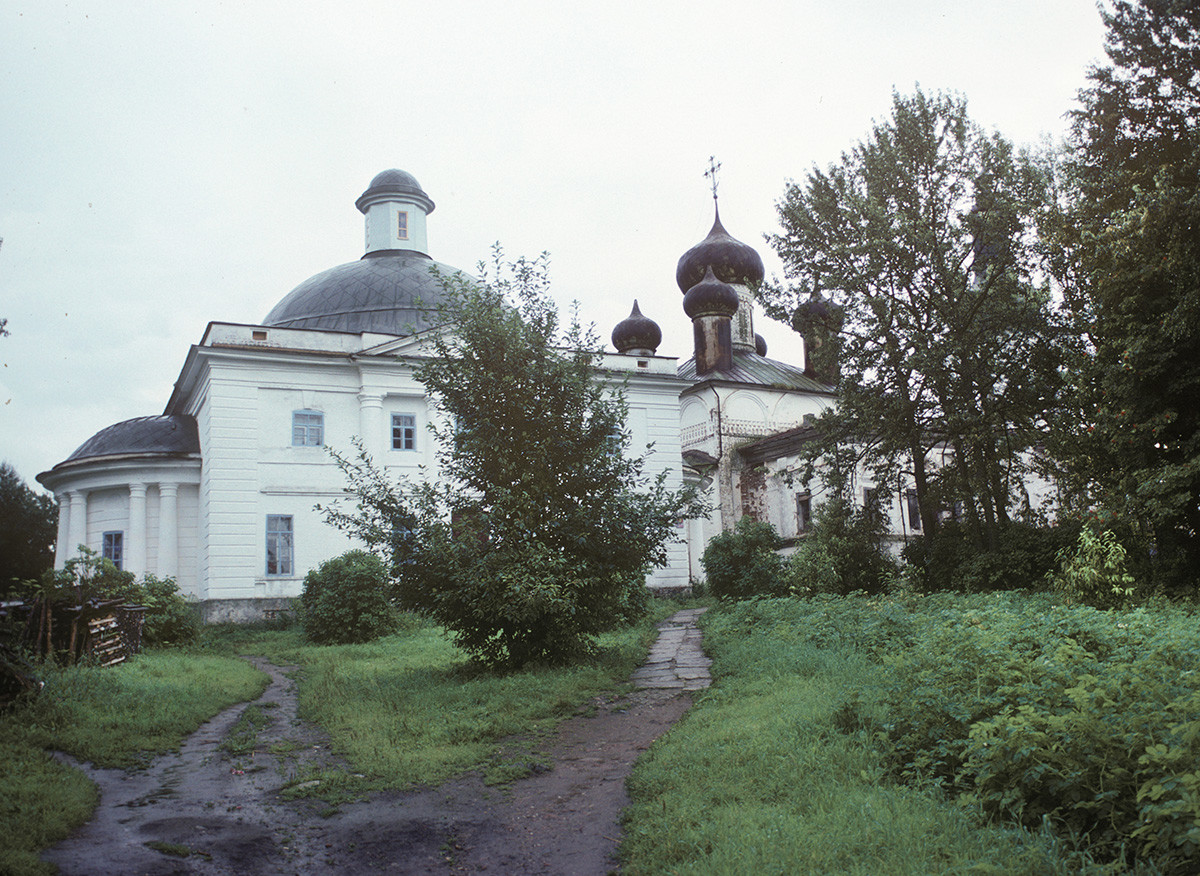 The convent also has a small brick chapel built at the turn of the 20th century over a source with remarkably pure water. Its restorative powers are particularly noticeable on a hot summer day.

Just beyond the convent walls at the river’s edge is the modest cemetery Church of the Presentation, built in 1812 to serve parish needs. This church was closed in 1941 and converted to a garage, with significant damage to the structure. 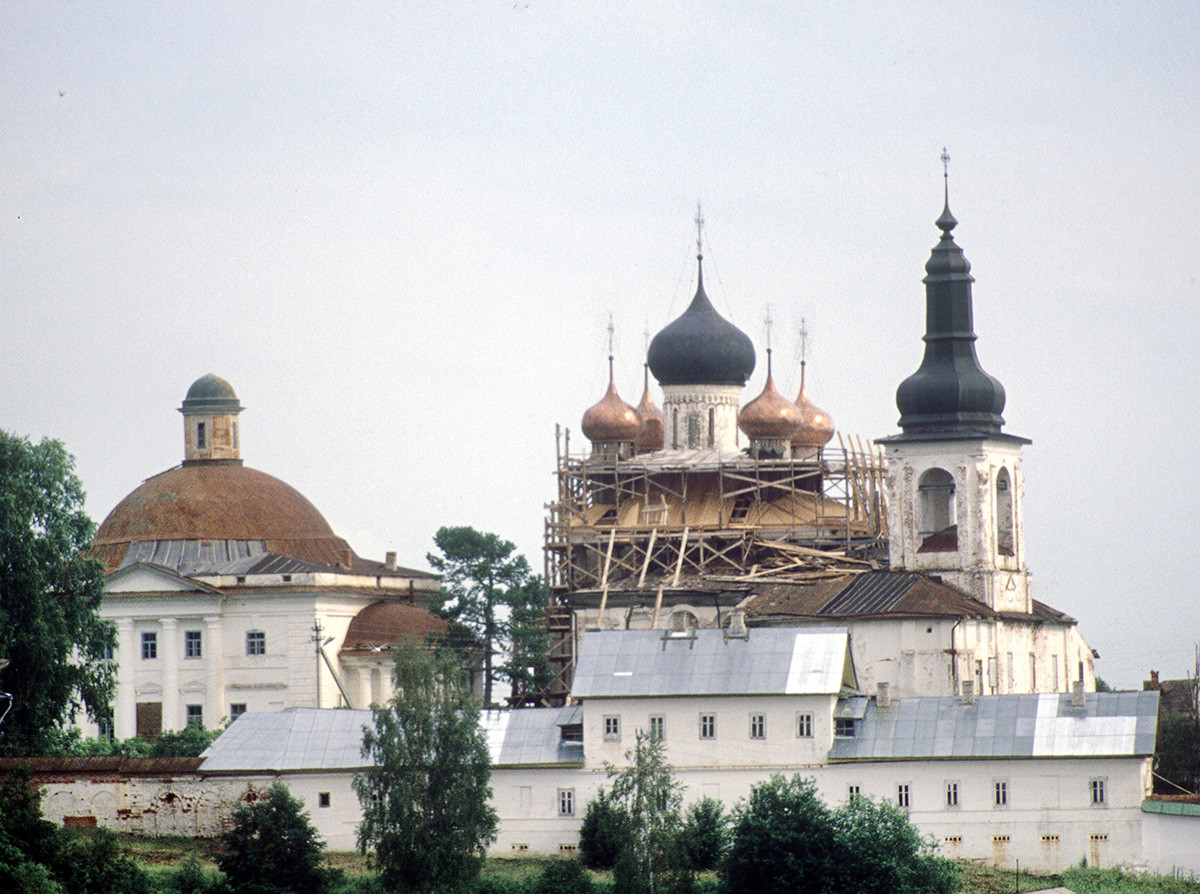 During the Soviet period, the Resurrection Convent functioned as an agricultural commune maintained by the sisters until 1932, when the enterprise was liquidated, and the nuns were dispersed. Many of them perished during the mass executions of 1937. 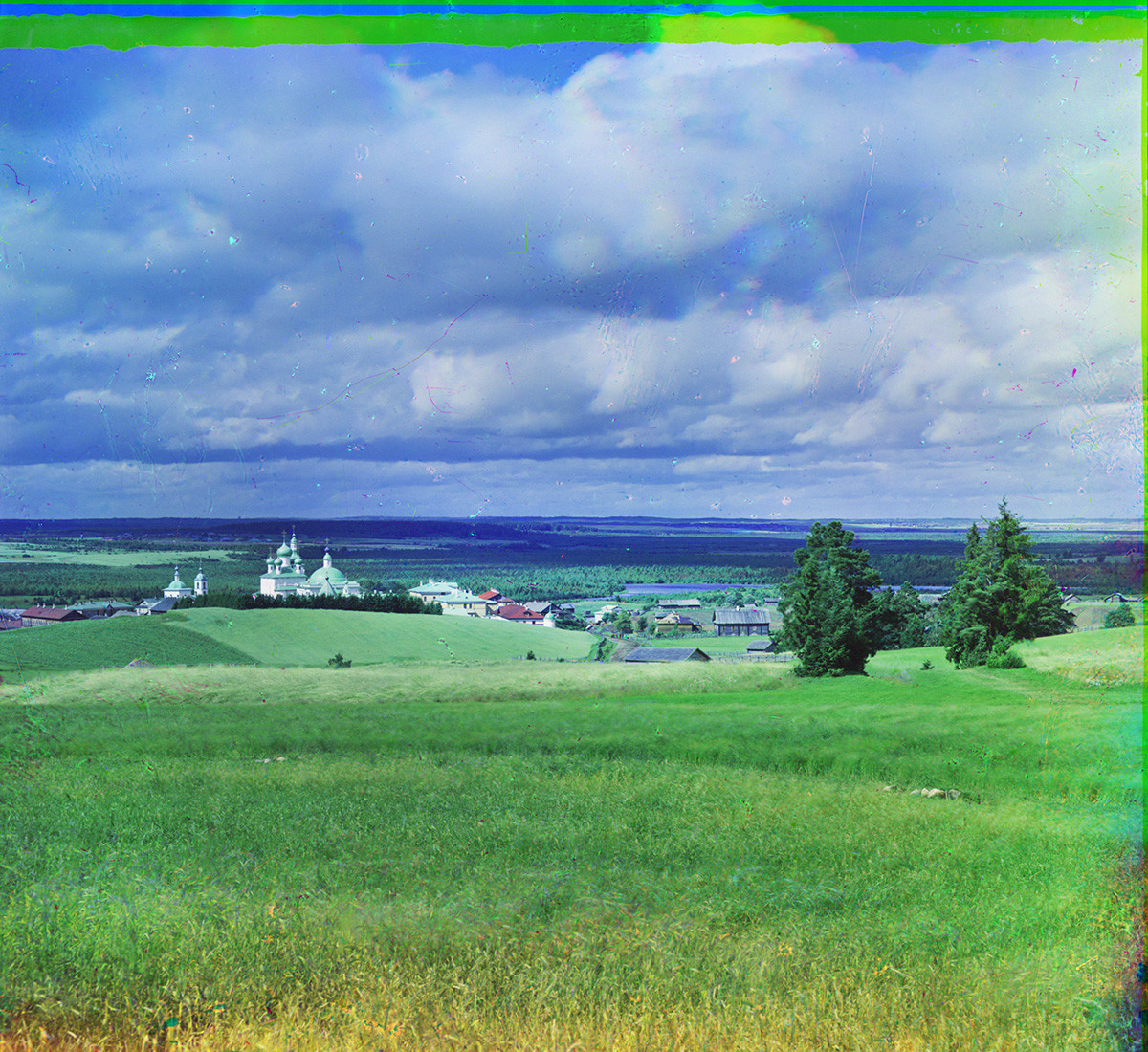 At this time, the Trinity Church was converted to a village club, and the cloisters served as living space for the impoverished village. For several years after World War II, the convent also functioned as a refuge for invalids. Throughout the Soviet period, the convent buildings suffered significant damage from neglect. 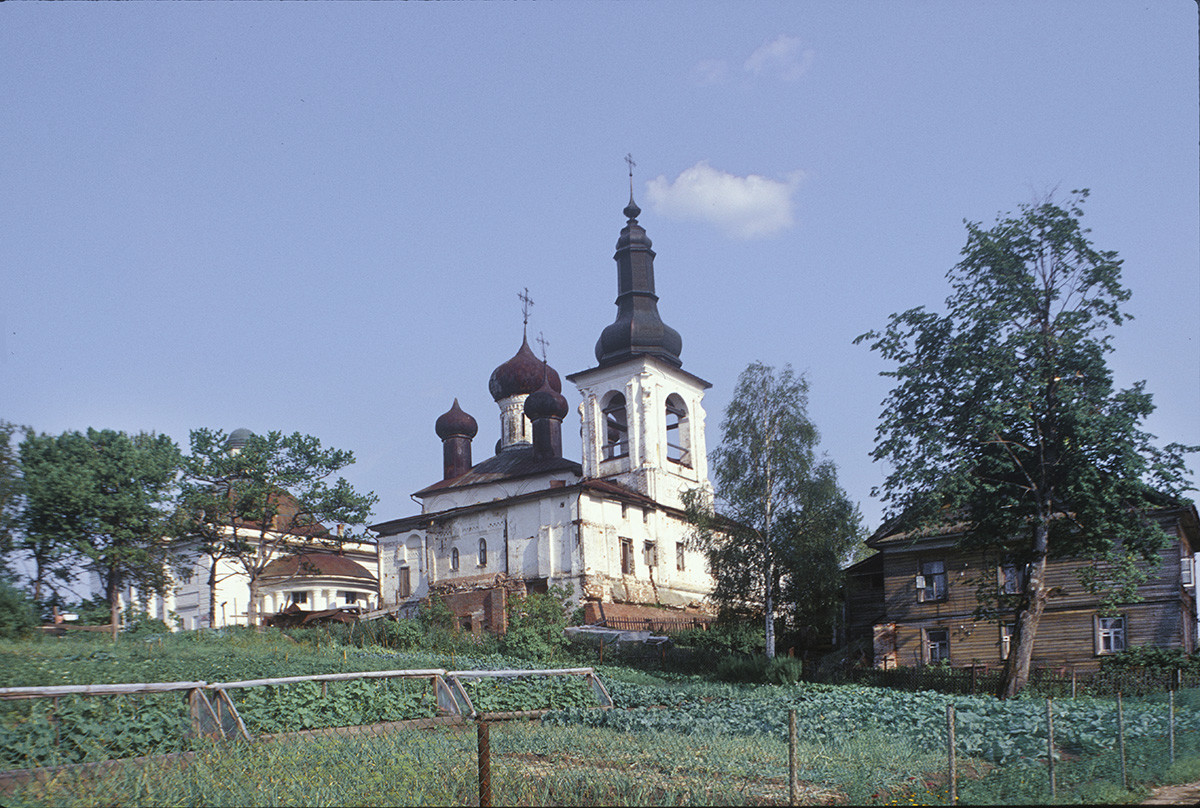 The revival of the ensemble began in 1990 with the re-consecration of the Presentation Church for the local parish. In 1999, the convent was reopened and gradually revived with the cooperative efforts of the region, the Orthodox Church and the Kirillov Museum, which has oversight of the complex.

In 2003, the Intercession Church was re-consecrated, and in 2016, restoration of the Trinity Cathedral was completed. However, the 16th-century Resurrection Cathedral remains in need of major work. Through these efforts, a dramatic part of Russian history has been reclaimed. 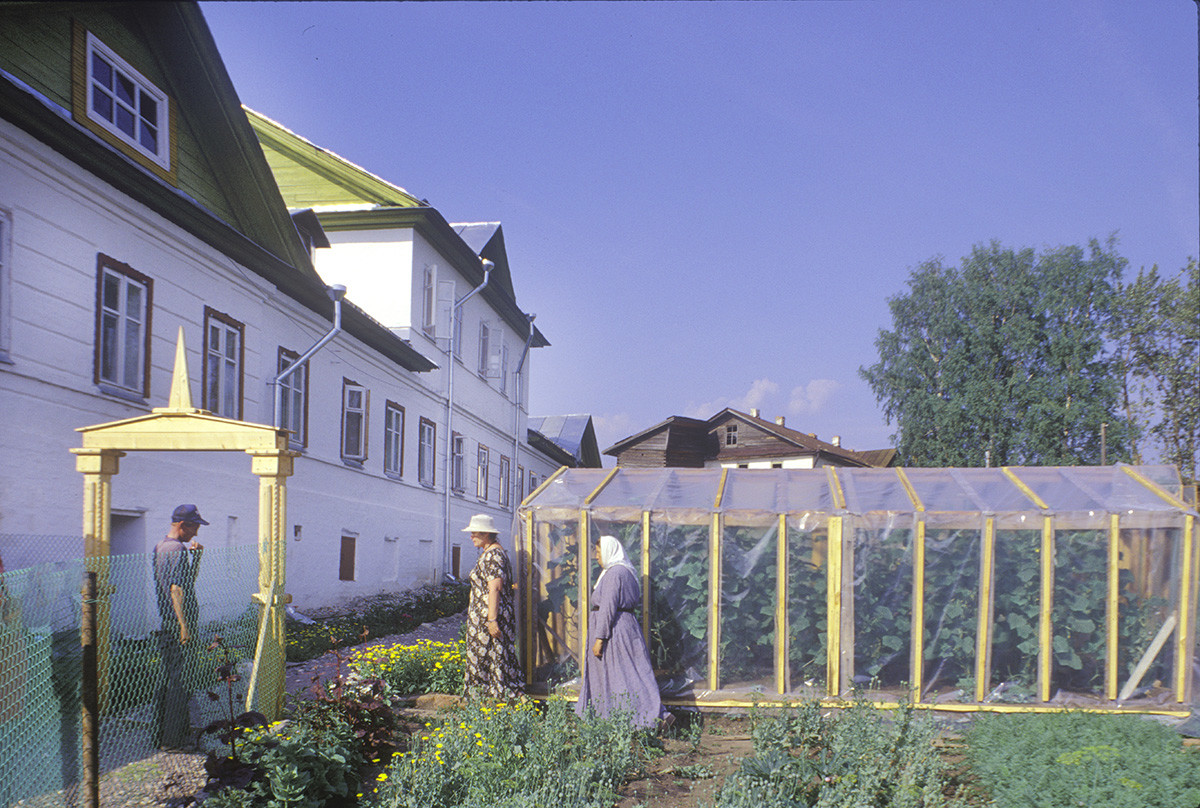