Staritsa and the Dormition Monastery: Ghosts from the time of Ivan the Terrible

William Brumfield
This small town offers a history lesson into Russia’s distant past.

Logistic support for his project came from the Ministry of Transportation, which facilitated his photography on Russia’s waterways and expanding rail network. His trips along the upper and middle parts of the Volga proved especially productive. The upper reaches of the Volga River unite some of Russia’s best-known ancient towns, from Staritsa and Tver to the northwest of Moscow to Yaroslavl and Kostroma in the northeast. 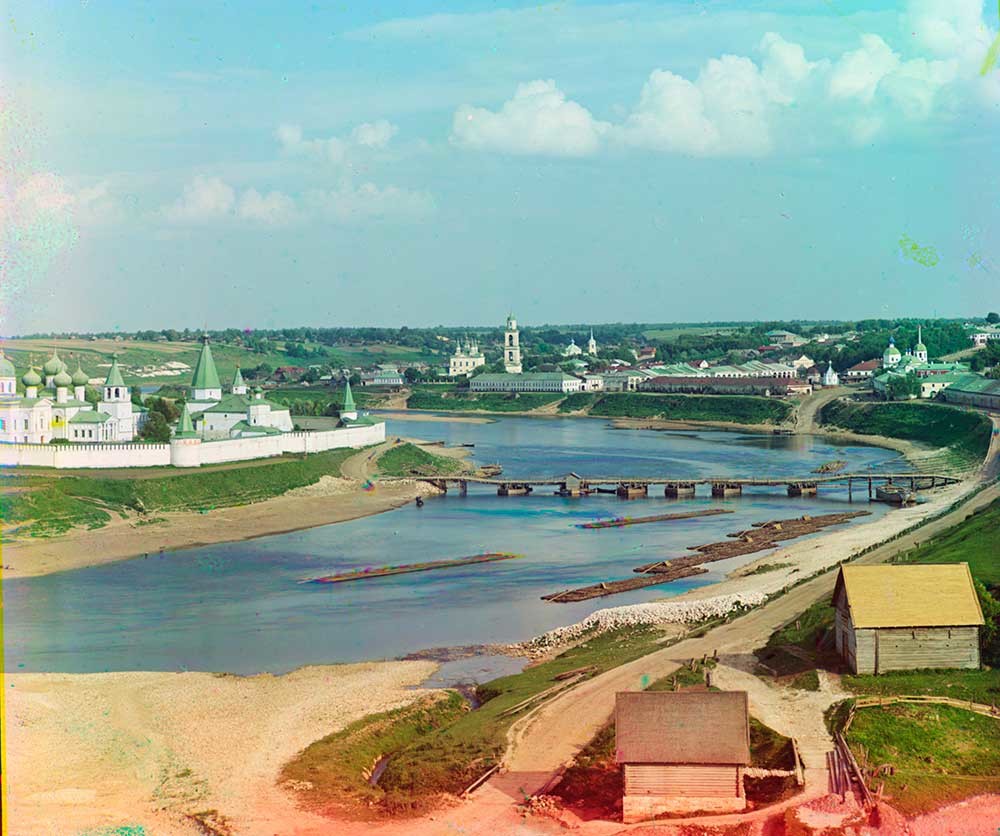 In summer 1910, Prokudin-Gorskii photographed extensively in Tver Province. Among the places he visited was the picturesque town of Staritsa, whose population in 1910 was 6,654 (current population around 7,700). My photographs of Staritsa date from the late 1990s.

Located near the confluence of the Staritsa River with the Volga at the eastern edge of the Valdai Heights, the settlement was founded in 1297 as the fortress “Gorodok” by Prince Mikhail Yaroslavich of Tver (1272-1318). Mikhail was locked in a fierce rivalry with Prince Yury Danilovich of Moscow, and after a complicated series of he was killed in November 1318 by their Tatar overlord, Uzbeg Khan. Despite his opposition to Moscow, Mikhail was considered a martyr and canonized by the Orthodox Church in 1549. 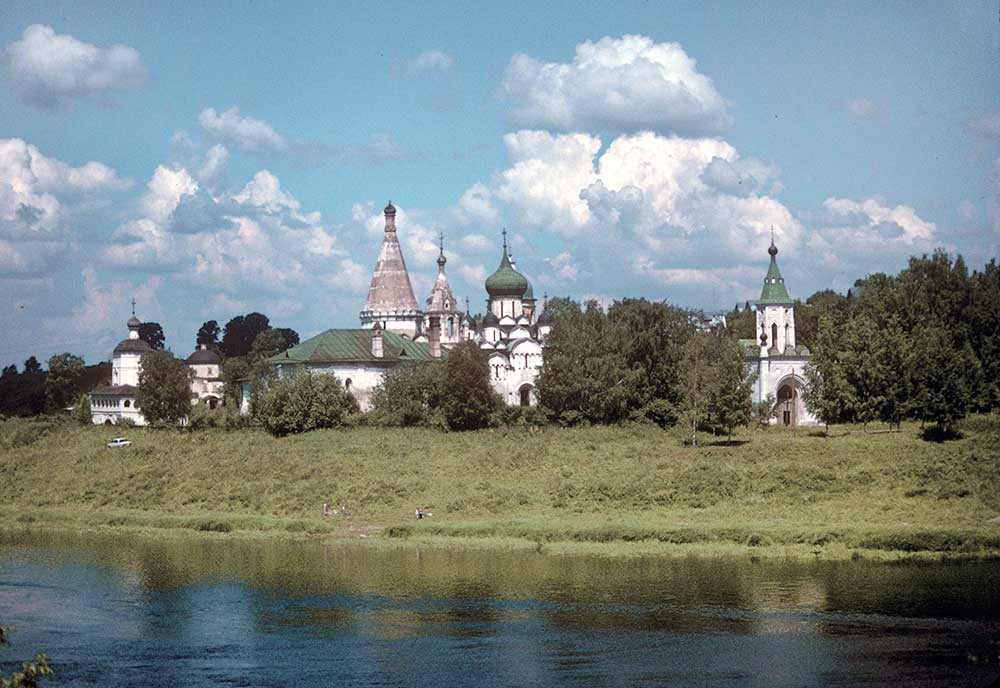 Together with the entire Tver Principality, the town was absorbed into Muscovy in 1485. Upon the death of Moscow’s Grand Prince Ivan III (the Great) in 1505, the area known as Staritsa was granted to Ivan’s sixth son, Andrei (1490-1537), as an appanage--a grant to a ruler’s younger son. Formally acknowledged in 1519, Staritsa for several decades remained Russia’s last appanage principality, although it was taken by Ivan the Terrible in 1566 as part of his oprichnina lands. Both rulers of the Staritsa principality—Andrei and his son Vladimir—would meet tragic fates.

Yet before the town existed, there was a Russian presence in the form of the Dormition Monastery, founded around 1110. Although flourishing in the 13th century, the monastery was destroyed in 1292 as the result of a Tatar raid instigated as part of a feud between Russian princes. 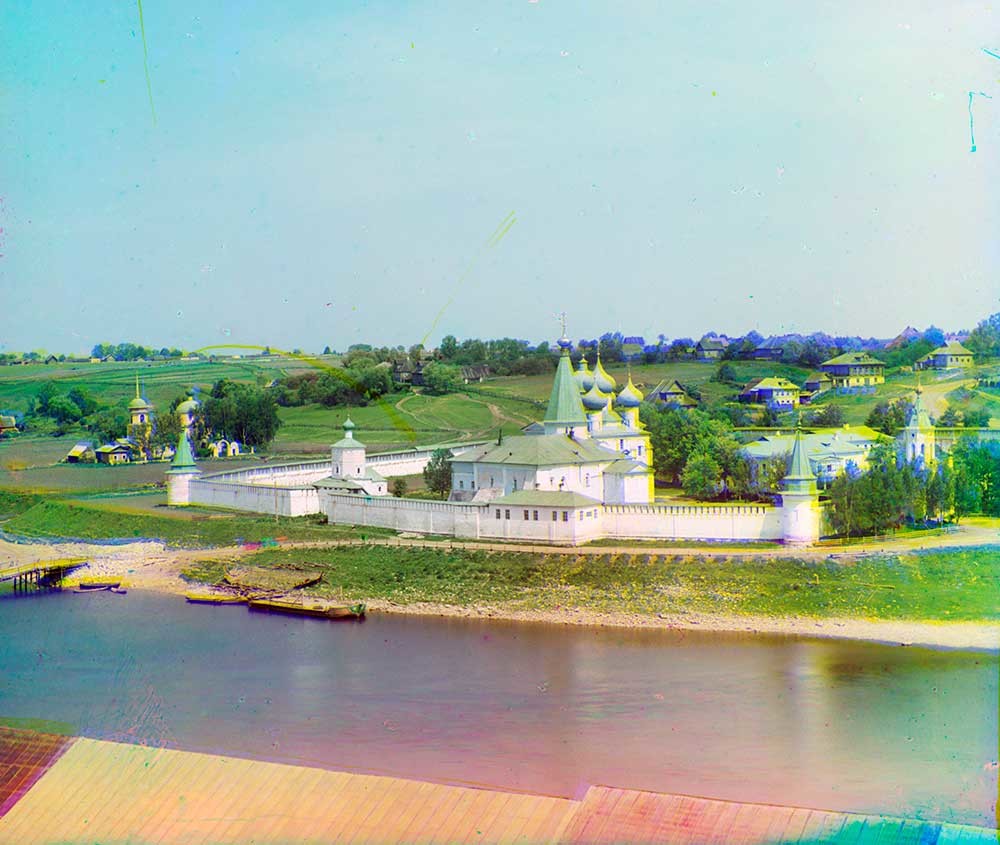 The Dormition Monastery was revived in the early 16th century by Prince Andrei as a centerpiece of his new principality. Although since modified, some of the monastic structures that he erected in limestone and brick still exist, including the main church, which is dedicated to the Dormition.

The Dormition Cathedral was an idiosyncratic combination of elements from its Moscow predecessors such as the early 15th-century Savior Cathedral at the Savior-Andronikov Monastery and the Cathedral of the Nativity of the Virgin (1500-05) at the Nativity Convent. The four corner bays were lowered and supported secondary cupolas, while the central dome soared above. The main part of the structure rested on an elevated base that was intended as a burial crypt for the Staritsa princes. But fate decreed otherwise. 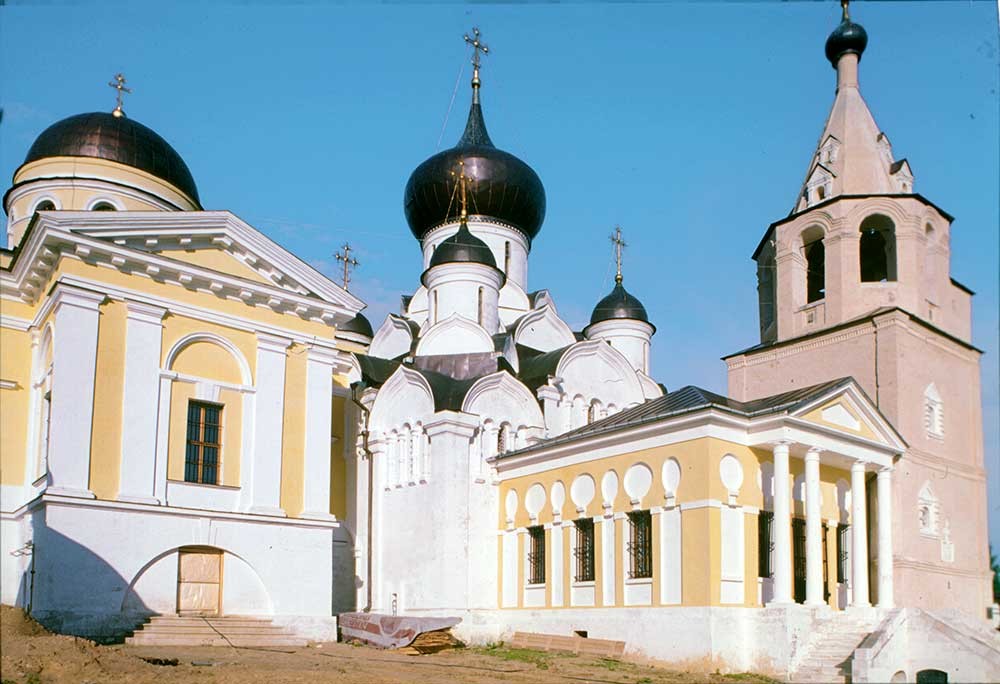 To his misfortune, Andrei came into conflict with Elena Glinskaya, the second wife of his older brother, Grand Prince Basil III. After the birth in 1531 of their son and heir to the throne, Ivan IV (“the Terrible”), Elena suspected Andrei as a potential rival to the young heir and thus a threat to dynastic stability, the lack of which had so plagued 15th-century Muscovy before the reign of Ivan the Great.

In 1537, Andrei was seized at Elena’s instigation and thrown into a Moscow dungeon, where he soon died. He was, nonetheless, buried with honors in the Kremlin Archangel Cathedral, which served as a place of burial for Moscow princes. 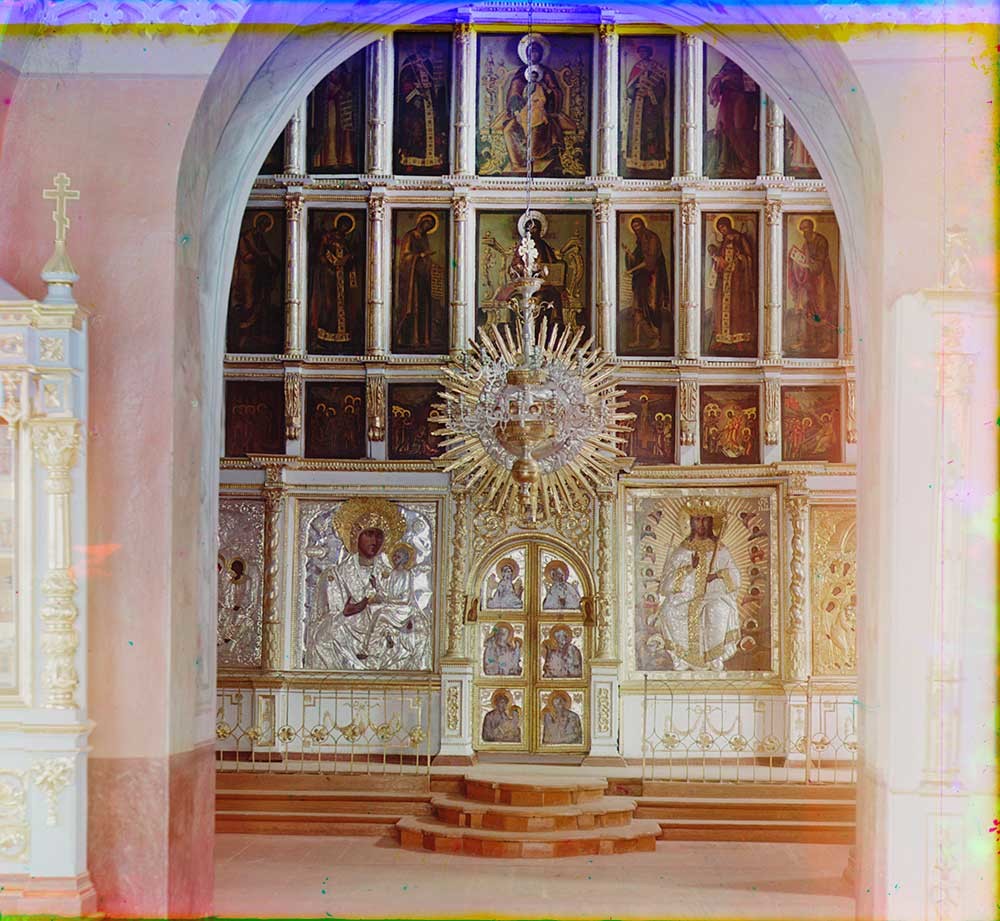 Ten years later, in 1541, Andrei’s son Vladimir was granted the Staritsa principality. Although Vladimir served Ivan IV in various capacities, he also fell under Ivan’s suspicion. Arrested in 1569, Vladimir was forced to take poison and then buried with honors in the Archangel Cathedral. Both father and son were buried in Muscovy’s most august princely shrine.

Despite this grim history, Ivan the Terrible viewed Staritsa and its monastery favorably. In 1569, his support led to the construction of a refectory and attached church dedicated to the Presentation of the Virgin Mary. (A side altar was dedicated to St. Arseny, Bishop of Tver.) Distinguished by its tall “tent” tower over the main structure, the church was consecrated in 1584, the year of Ivan’s death. 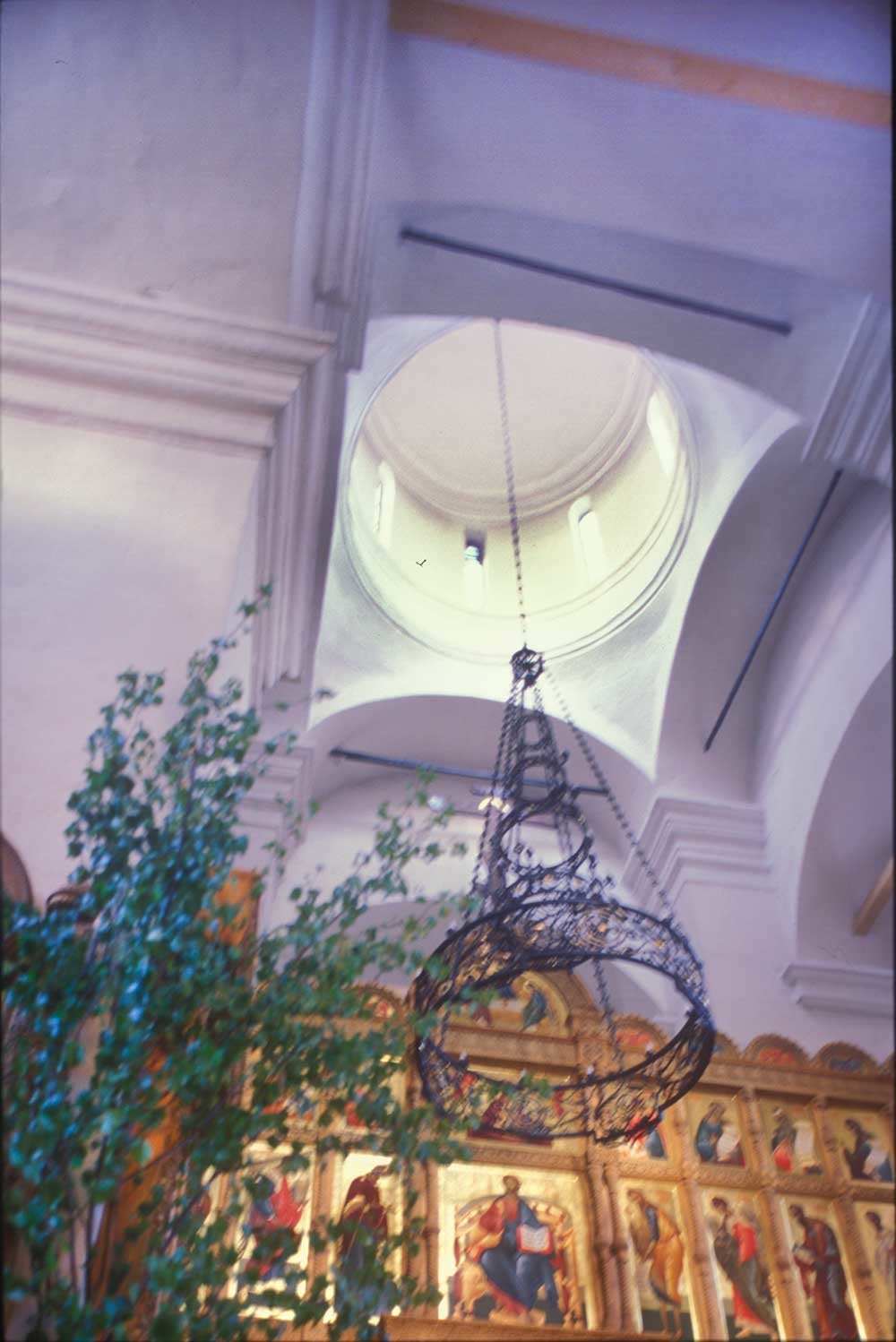 During this time the monastery was led by abbot Job, who served from 1559 until his transfer in 1571 at Ivan’s command to Moscow, where he became head first of the Simonov Monastery and then the powerful New Savior (Novospassky) Monastery, with its close connections to the court. In 1589, during the reign of Ivan’s son Fyodor, Job was appointed the first patriarch of the now independent Russian Orthodox Church.

Job’s tenure coincided with one of the most turbulent periods in Russian history. With the death of Tsar Fyodor in 1598, Russia’s first dynasty, the Rurikids, came to an end. The court magnate Boris Godunov was chosen as the new tsar, and Job’s position remained untouched. 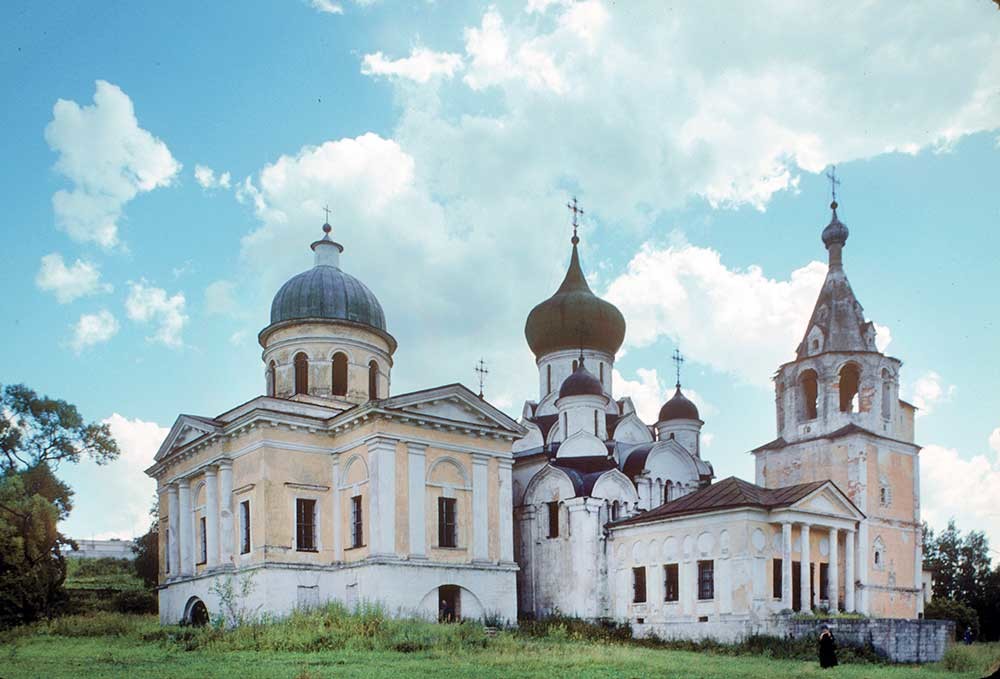 Yet the sudden death of Boris in 1605 created a dynastic vacuum and led to conflict known as the Time of Troubles. Job refused to support the claims of a pretender to the throne known as the first False Dmitry-pretending to be Ivan the Terrible’s child who died under mysterious circumstances in Uglich.

Supporters of the pretender denounced Job, and he was subsequently exiled back to the Dormition Monastery in Staritsa, where he died in 1607 and was buried at the site of the monastery’s bell tower. After the establishment of the Romanov dynasty in 1613, Job was considered a heroic figure, and his remains were solemnly reburied in the Dormition Cathedral of the Moscow Kremlin in 1652. 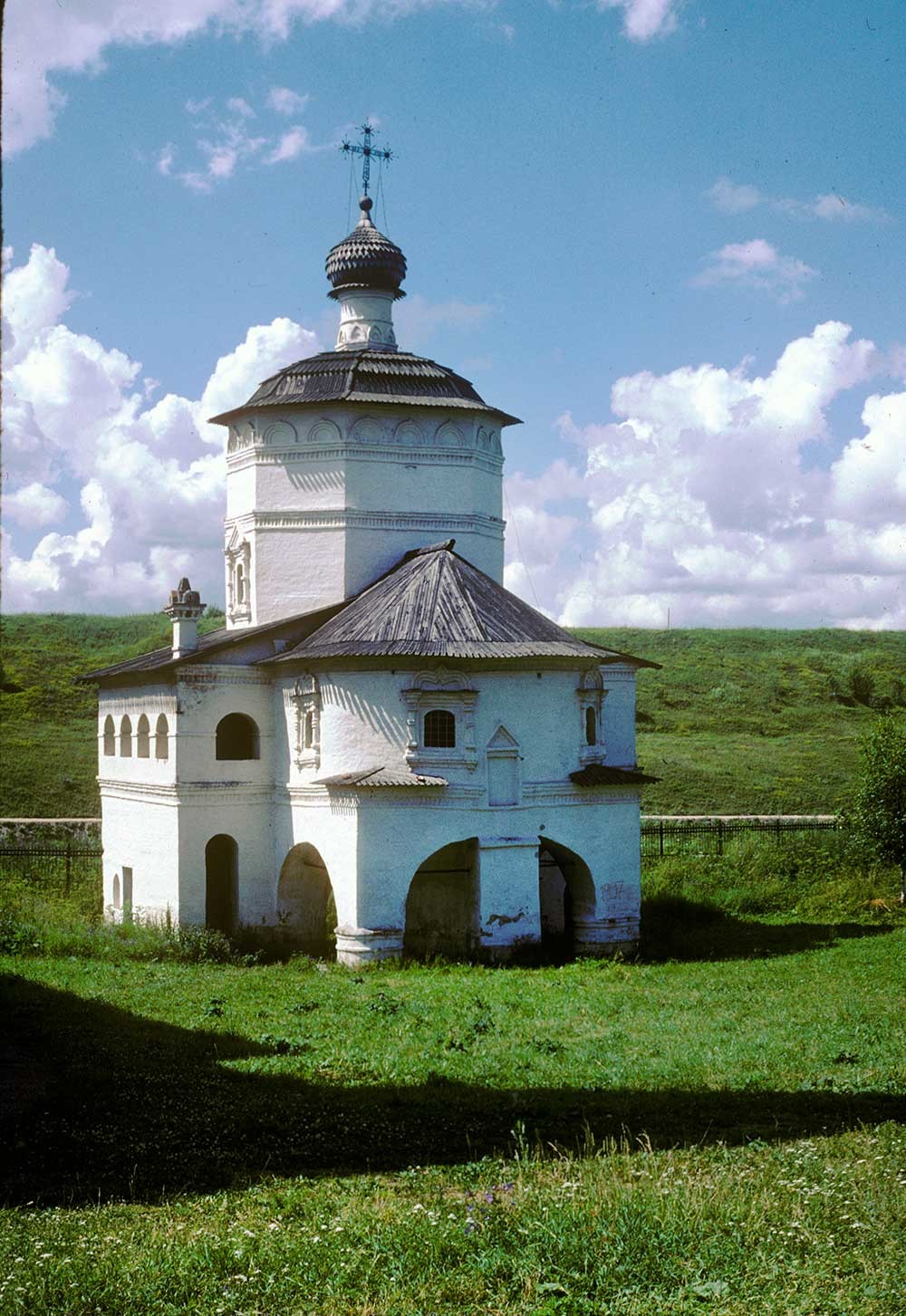 Job’s original burial place at the Dormition Monastery was commemorated with the creation of a chapel when the bell tower was rebuilt around 1685. Prokudin-Gorsky photographed the interior of this shrine. Patriarch Job was canonized by the Russian Orthodox Church in 1989.

Other significant additions to the Dormition Monastery include the Church of St. John the Divine, a small treasure built in 1694 over the main monastery gate in the west wall facing the Volga River. After a flood in 1810, the Holy Gate was transferred to the south wall. In 1885, Abbot Agafangel designed the construction of the octagonal Dormition Tower above the gate, which both Prokudin-Gorsky and I photographed. 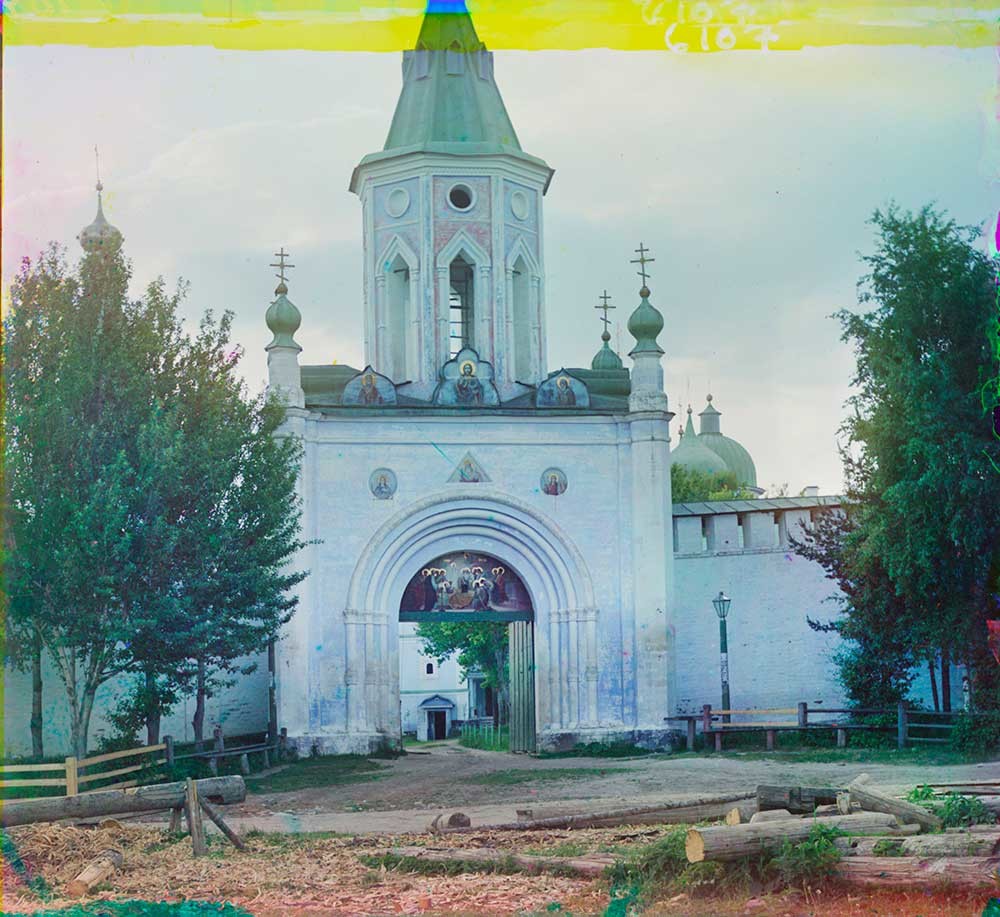 The final major addition to the monastic ensemble was the construction in 1819 of the large Church of the Holy Trinity, designed in a neoclassical style and attached directly to the north façade of the Dormition Cathedral.

With the establishment of Soviet power, the monastery’s abbot, Pavel, was killed in 1918. Soon thereafter the monastery was closed, and in the 1930s its walls, which had been rebuilt in brick during the 18th century, were dismantled for building material. The empty churches were used as warehouses. 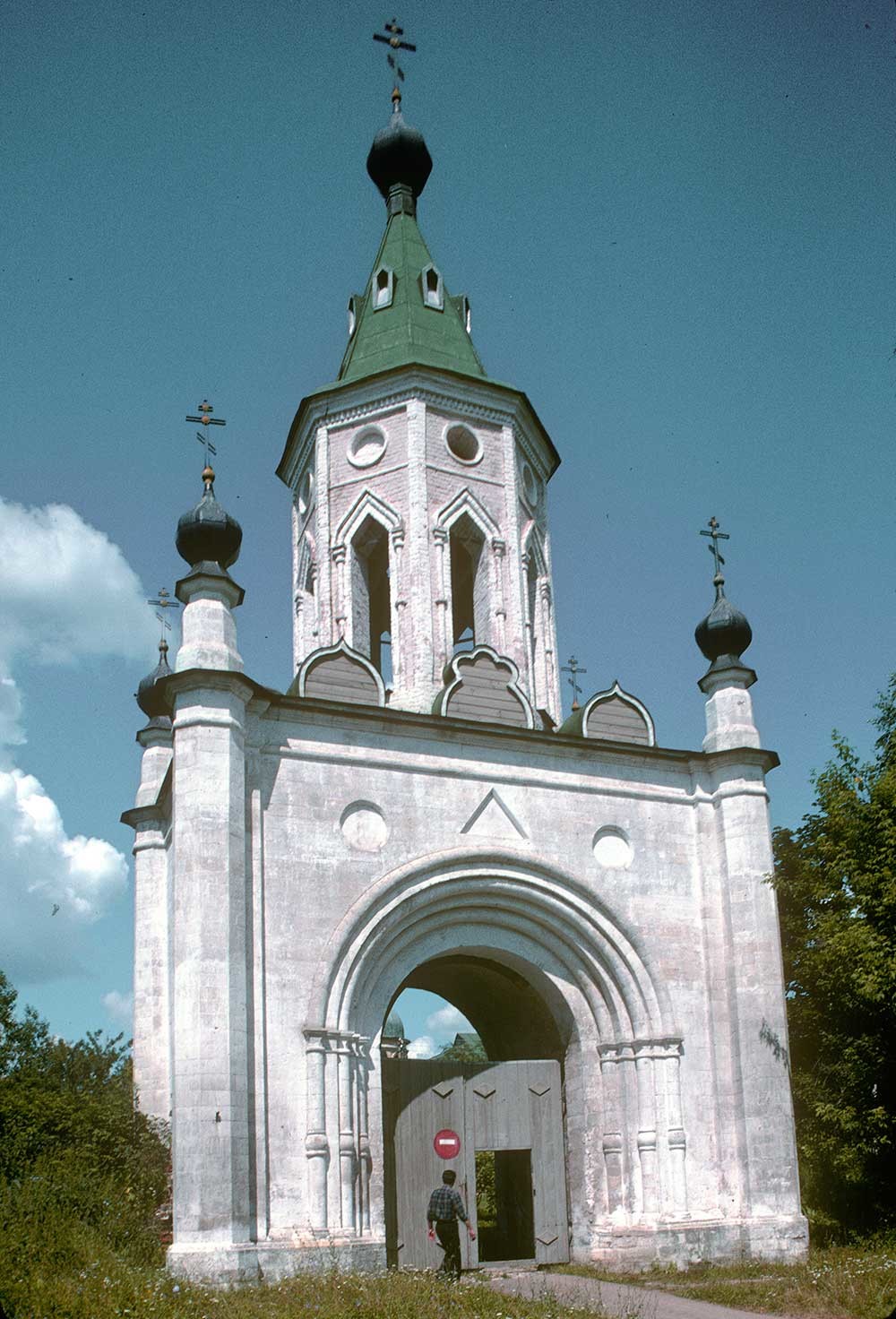 During World War II, Staritsa was occupied by the Germans from Oct. 12,  until its liberation on Jan. 1, 1942 during the Soviet counteroffensive around Moscow. After the war, periodic efforts were made to conserve the monastery’s valuable historic ensemble. In 1996, the monastery was returned to the Orthodox Church.

Prokudin-Gorsky’s several views of the Dormition Monastery include stunning panoramas with the Volga River. My photographs were taken in 1997, just before the beginning of restoration, and in 2009, when the prolonged process of restoration was already well underway 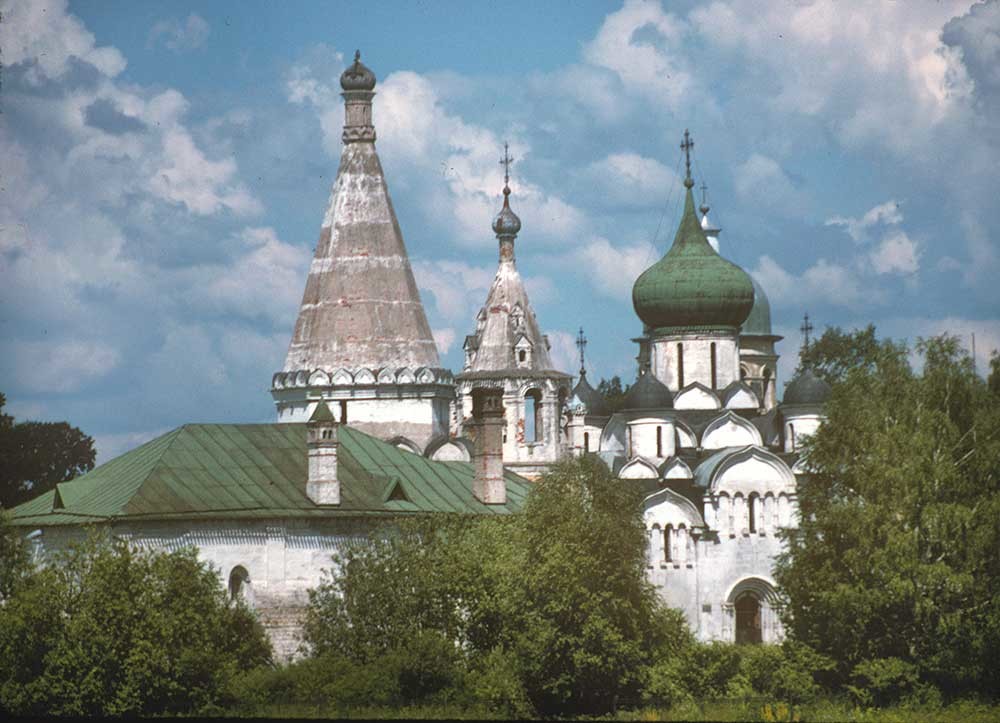