Stairway to heaven: The churches at Romanov 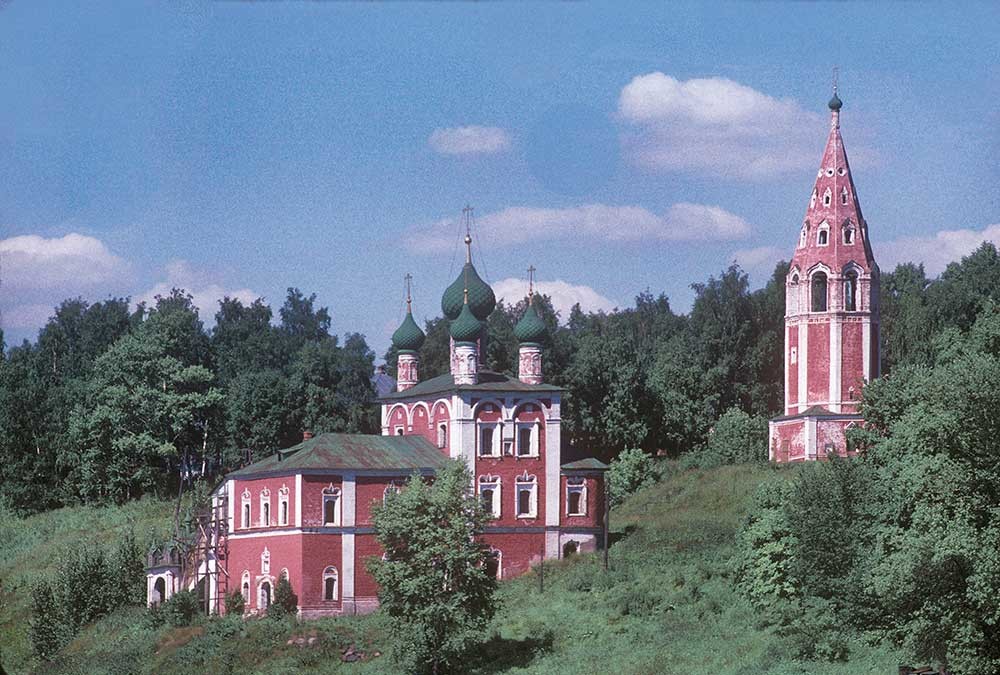 Logistical support for his project came from the Ministry of Transportation, which facilitated his photography on Russia’s waterways and expanding rail network. His trips along the upper and middle parts of the Volga River proved especially productive 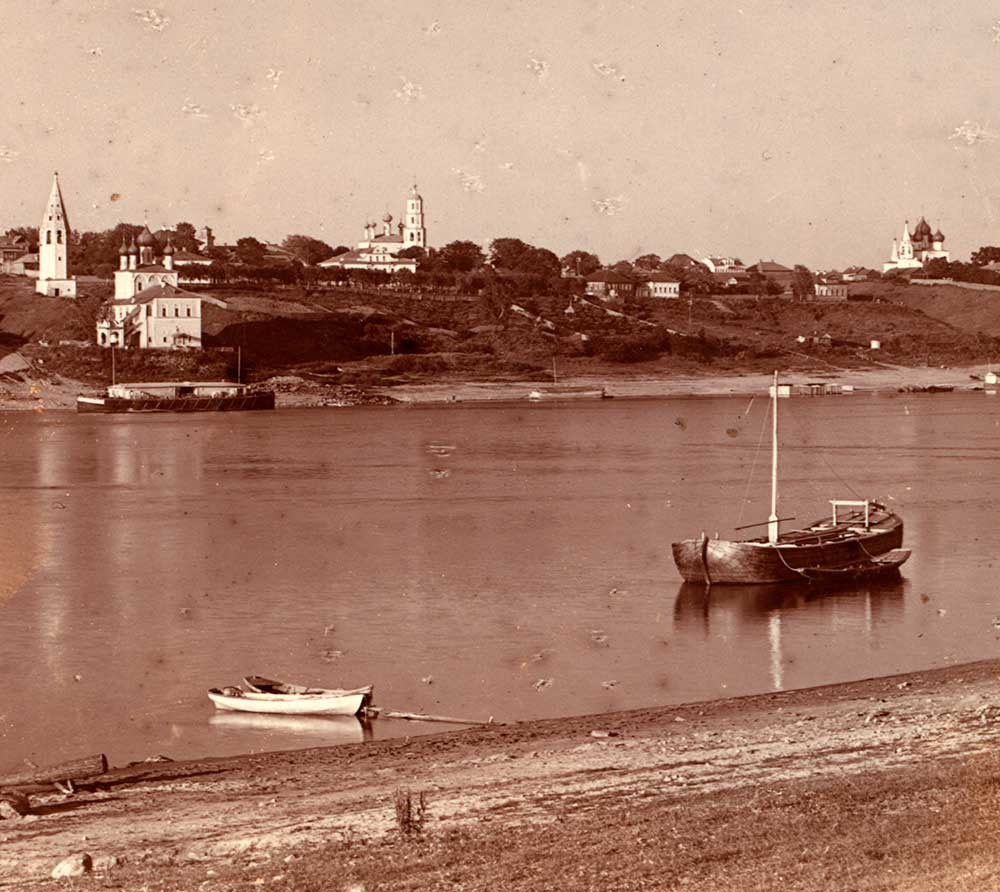 Romanov. View toward southeast from right bank of Volga River. From left: Church of Kazan Icon; Church of Resurrection (demolished 1930s); Cathedral of Elevation of the Cross. Summer 1910.

of the most picturesque of the many Volga River sites that he photographed in the summer of 1910 is now known as Tutaev. Unfortunately, Prokudin-Gorsky’s original glass negatives from this part of his trip are missing (probably destroyed), but the images from one of his contact print albums convey valuable information on the main architectural landmarks and their natural setting.

Situated almost 185 miles northeast of Moscow and 25 miles northwest of the regional center Yaroslavl, current population is around 40,000. Although modest in size, its commanding location displays some of the most distinctive examples of church architecture in central Russia 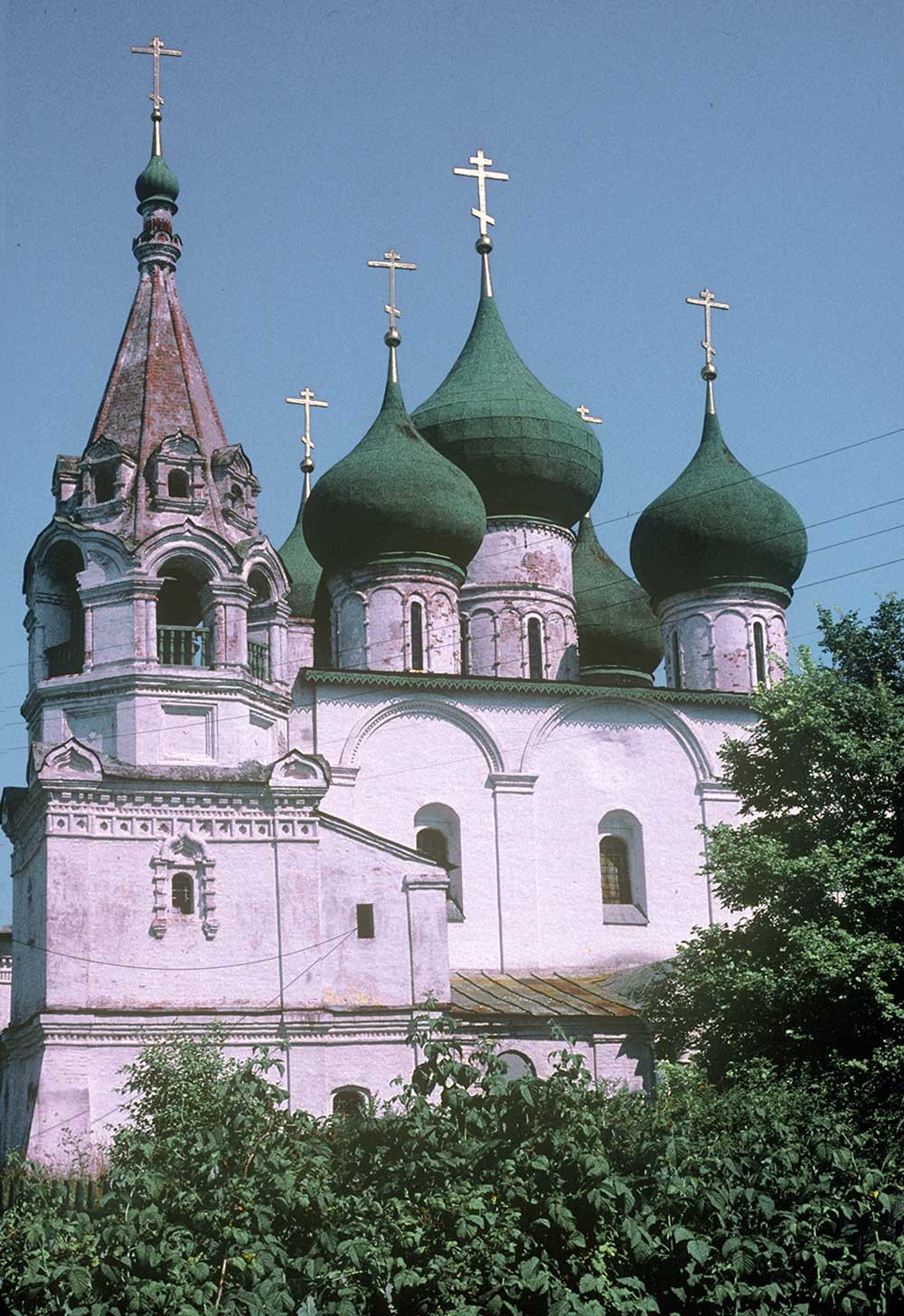 an unusual arrangement, Tutaev is comprised of two communities situated opposite each other on the Volga. Before 1822 each settlement had its own name: on the right bank, Borisoglebsk and on the left bank — Romanov. In 1822, the names were unified to Romanov-Borisoglebsk.

To avoid any association with the Romanov dynasty, the name was changed in 1918 to Tutaev, in memory of a Red Army soldier killed during an uprising against Bolshevik power in nearby Yaroslavl. In fact, the “Romanov” component of the settlement name appeared long before the founding of the Romanov dynasty in 1613. 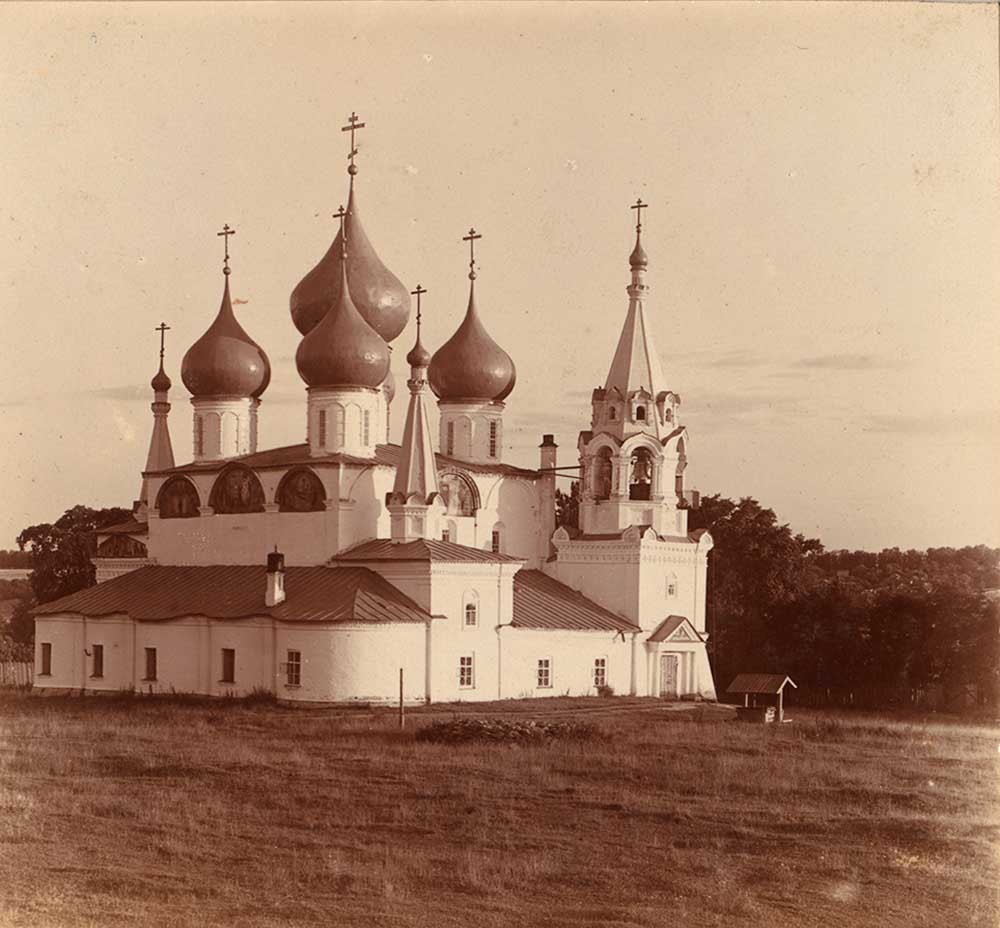 Cathedral of Elevation of the Cross. Northeast view with attached chapels and bell tower. Summer 1910.

The settlement of Romanov was established in the late 13th century following the sanctification of Roman Vladimirovich, a feudal prince based in nearby Uglich. At its center was a log church dedicated to the Elevation of the Cross. To its continued misfortune, the settlement proved vulnerable to raids by Tatars and mercenaries from Novgorod the Great, the medieval commercial power of northwest Russia.

Later in the 14th century, Romanov was taken into the Yaroslavl Principality and rebuilt by Prince Roman Vasilevich. In the mid-15th century, Romanov entered the orbit of Muscovy and became a domain of Grand Princess Maria Yaroslavna, mother of one of medieval Russia’s most successful rulers, Ivan III (the Great). In 1491, Romanov was formally absorbed into Muscovy. 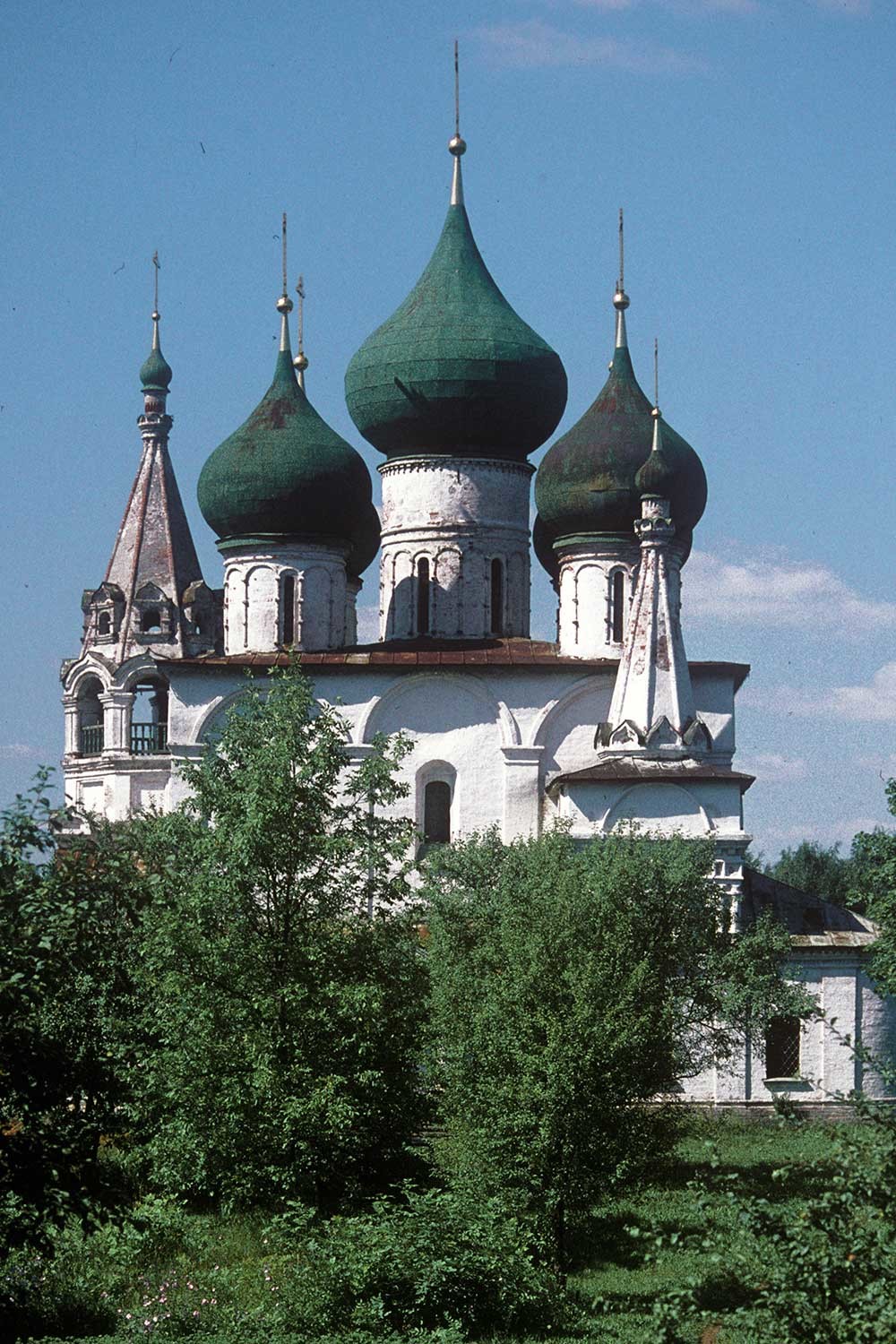 rule, however, did not lead to a placid existence. A decade after his conquest of the Tatar capital of Kazan in 1552, Ivan IV (the Terrible) initiated a policy of resettling groups of Tatars in the Yaroslavl territory, perhaps with the thought of their assimilation or conversion to Christianity. As part of this policy, Romanov was given to clans headed by prominent Mirzas (Tatar aristocrats).

Over a period of two centuries the policy produced mixed results, and in 1760, Empress Elizabeth ordered the resettlement of unconverted Romanov Tatars to the Volga town of Kostroma. Yet the Tatar presence provided Romanov with one important legacy—a breed known as Romanov sheep, whose fleece was especially valued for the making of sheepskin coats.

In the early 17th century, Romanov, like so many other towns in the area, was raided and burned during the dynastic crisis known as the Time of Troubles. The establishment of the Romanov dynasty (no connection to the town of Romanov) gradually brought a measure of stability to central Russia. 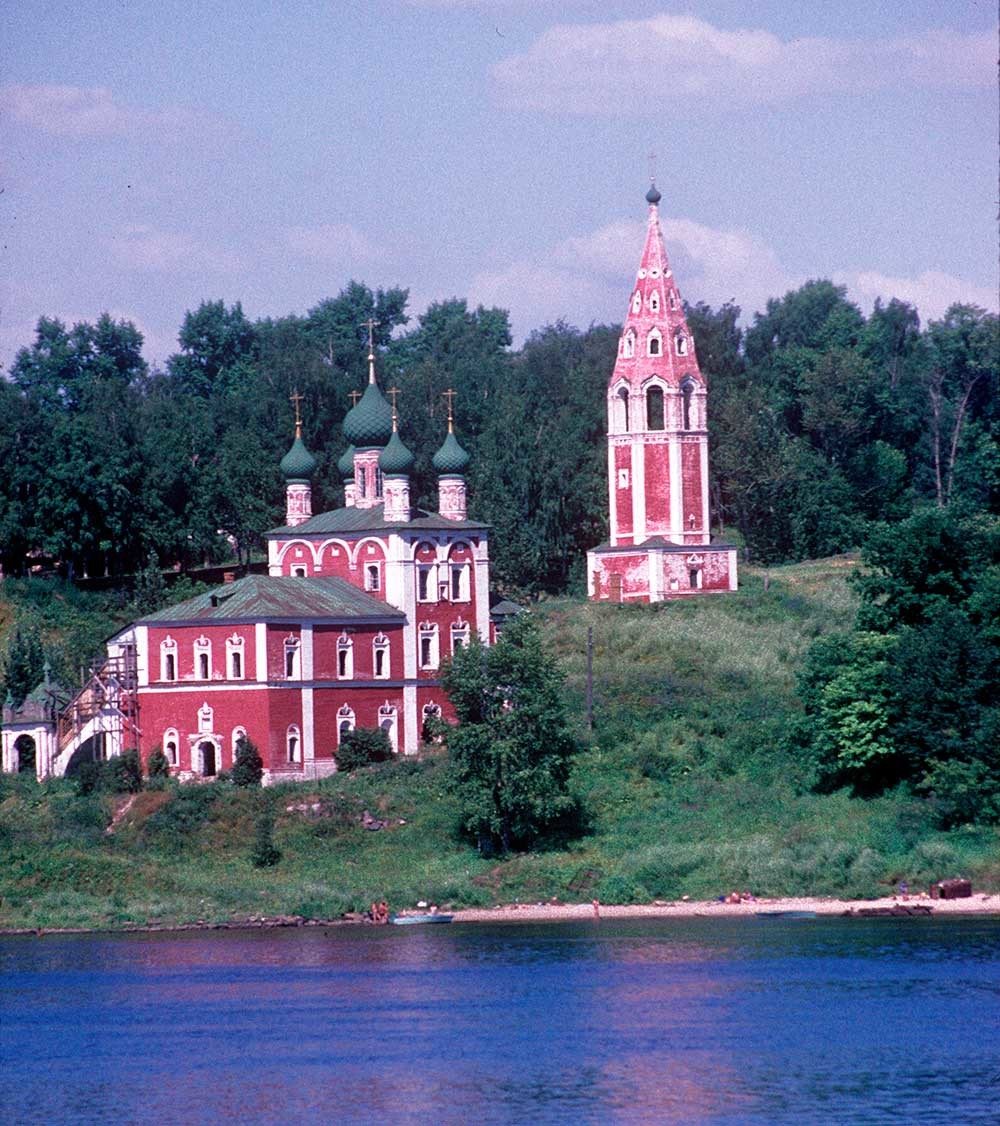 Although benefiting from the economic revival, Romanov was shaken by an Orthodox Church schism that arose in the 1650s in opposition to a series of liturgical reforms. A notable leader of the Old Belief (as the church dissent was known) was a Romanov priest named Lazar, who died in northern exile in 1682. Old Believers were an important presence in Romanov, and perhaps this implicit challenge stimulated the official Orthodox Church to embark on a program of construction in Romanov and Borisoglebsk over the next century. 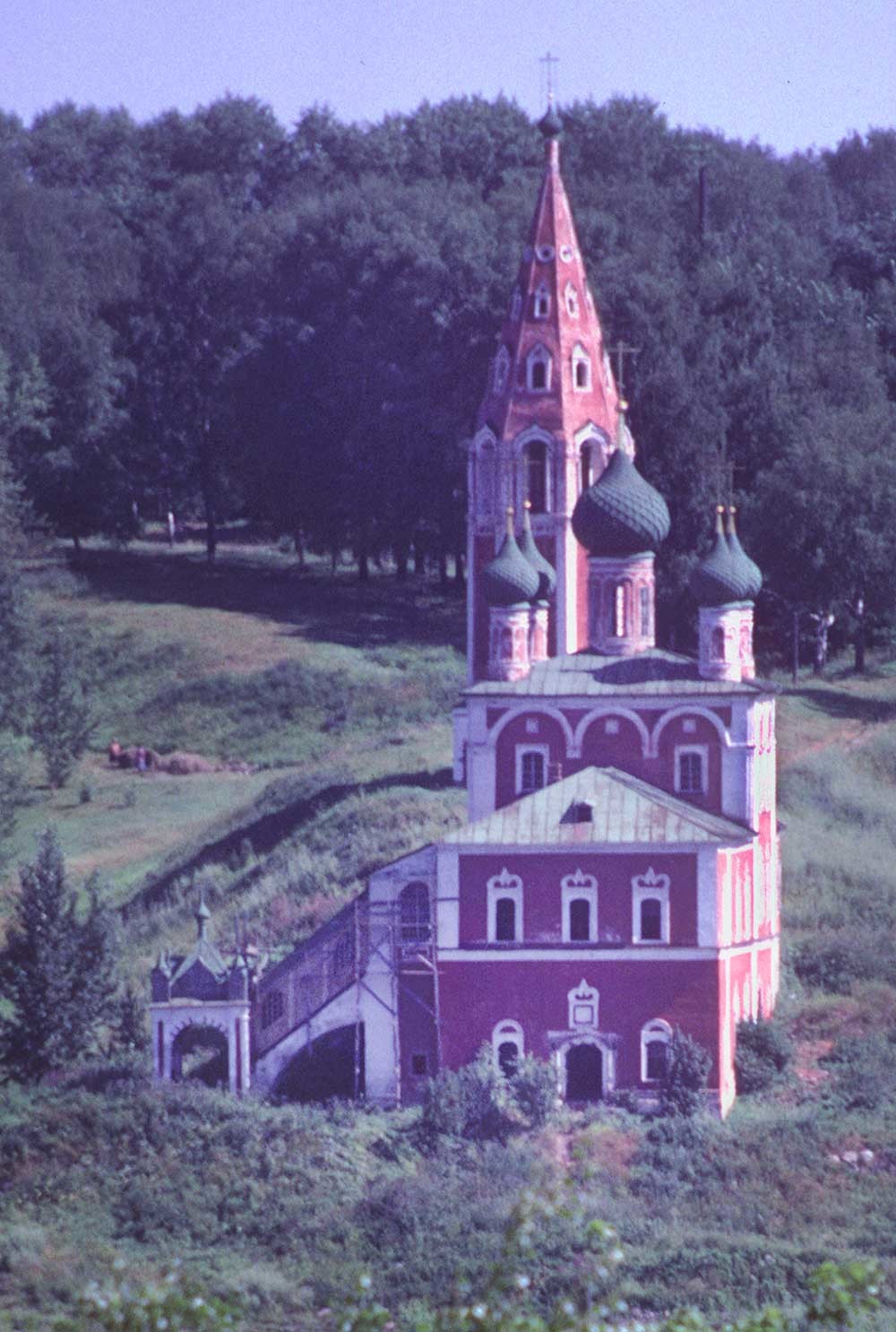 The central church of Romanov--dedicated to the Elevation of the Cross—had been built and rebuilt of wood from time immemorial. In the 1650s the cathedral (as it had become) was reconstructed of brick in a traditional 16th-century style. Crowned with five large cupolas, the central structure was flanked on the north and south by attached chapels dedicated to the Presentation and the Smolensk Icon of the Virgin. A bell tower with a conical cap (or “tent”) was attached to the northwest corner. 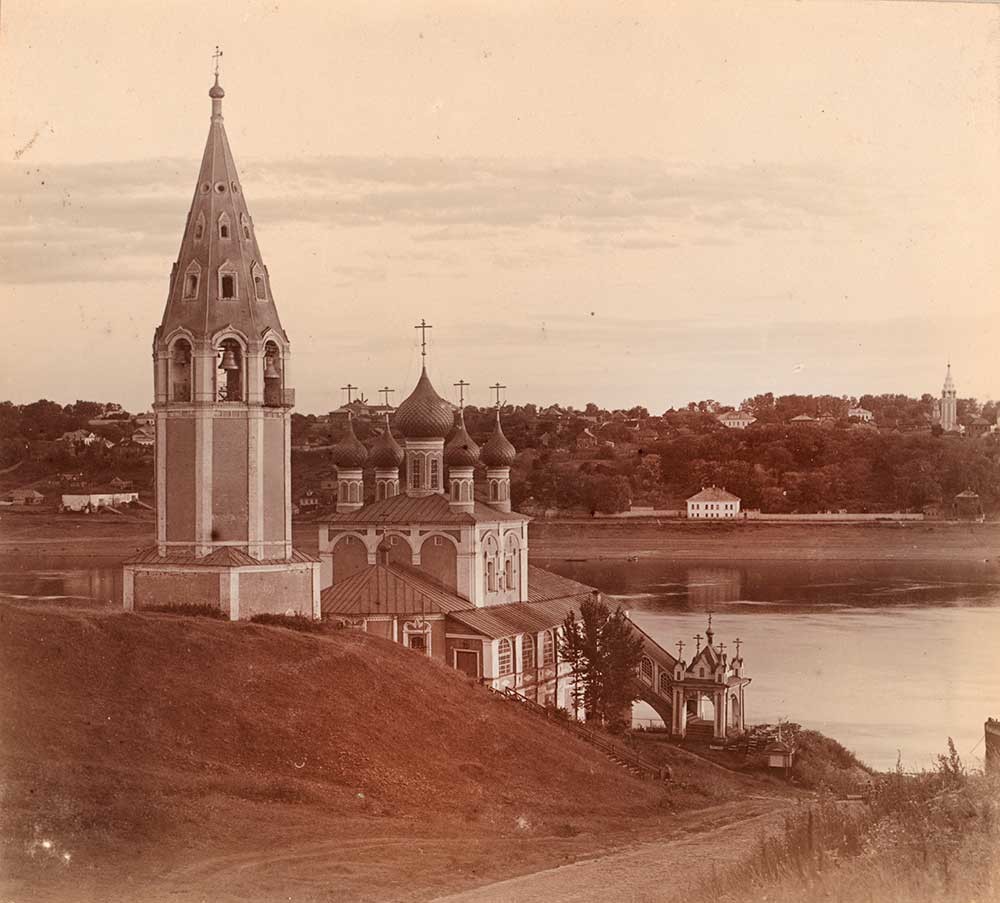 Prokudin‑Gorsky's photograph over an open field from the northeast sharply captures the various components. Originally, however, the structure was constricted by its location in the northeast corner of the town fortress.

Closed in 1930, the cathedral and its pilfered icon screen were returned to the Orthodox Church in 1992. My photographs from 1997 show a good state of preservation on the exterior. On the interior, late 17th-century frescoes had partially survived the Soviet period but are now in a state of severe deterioration from ecological causes 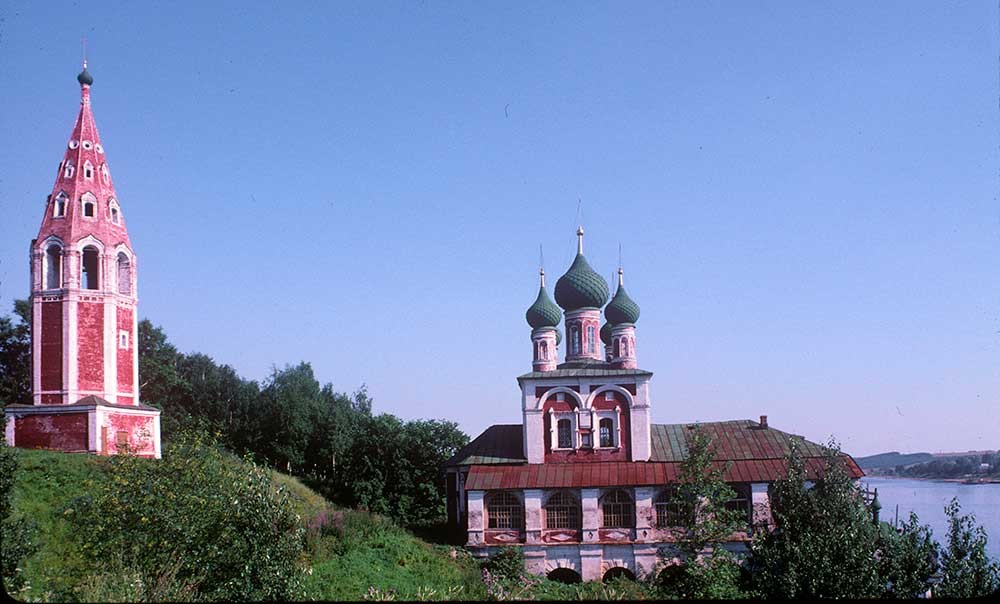 most dramatic landmark in Romanov is a nearby church with a dual dedication to the Kazan Icon of the Virgin (the lower level, used for winter worship) and the Transfiguration of the Savior (the upper part, for summer services). Built in 1758 in an archaic 17th-century parish style with a crown of five cupolas, the colorful, idiosyncratic structure has been beloved by generations of artists.

Particularly striking is the placement of a slender free-standing octagonal bell tower on the east crest above the church. Painted bright red with white trim, this array of simple geometrical forms cascades down the steep left bank of the Volga. Like its counterpart at the Resurrection Cathedral directly across the river, the bell towers serve as superb beacons above the Volga on its course to the city of Yaroslavl 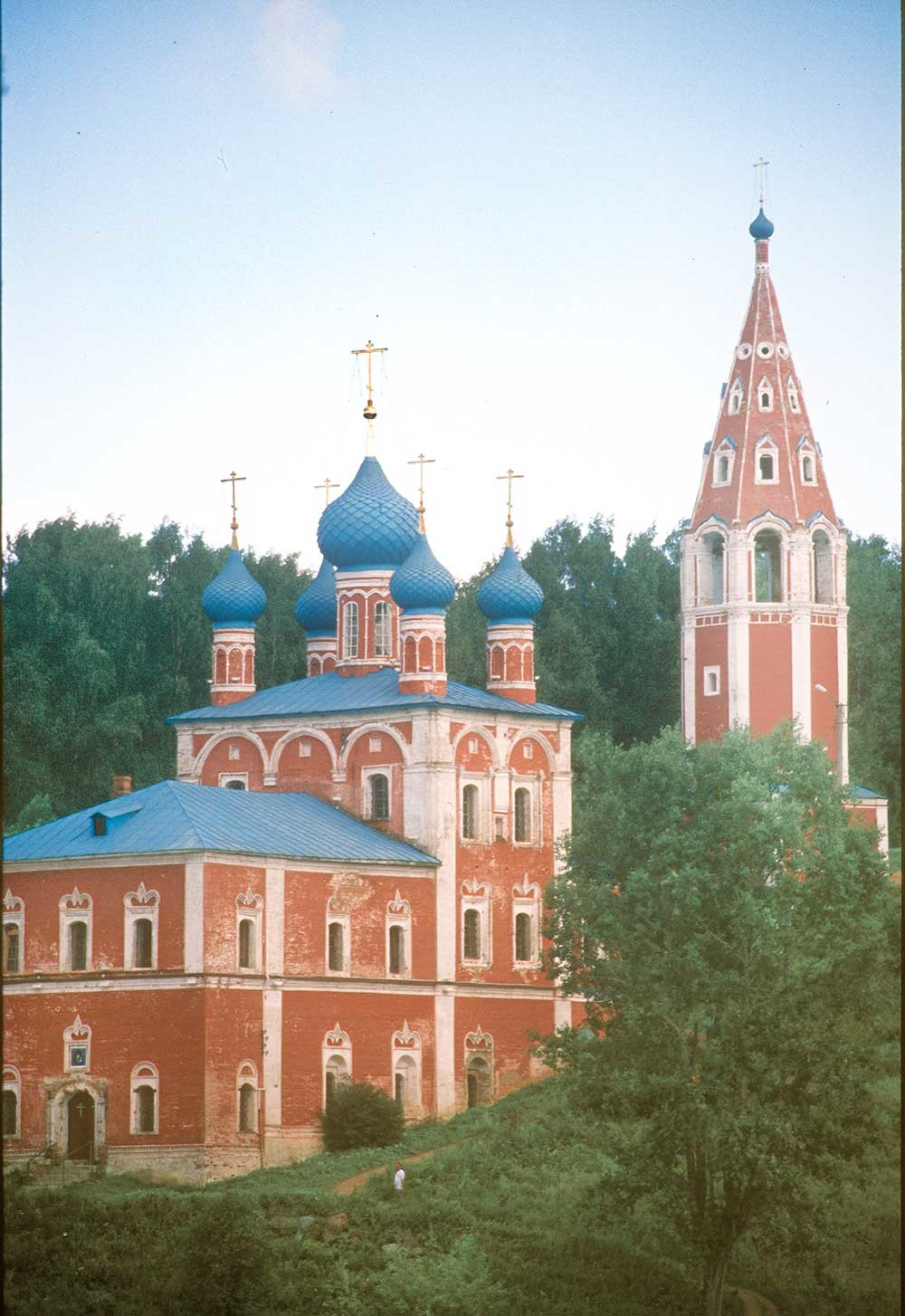 in 1931, the church during the Soviet period served a variety of functions, including a river rescue station, living space and even, apparently, a brewery. It was returned to the parish in 1997.

Although the original glass negative is not extant, Prokudin‑Gorsky's view captures the church components in their relation to the river. My photographs over the period of a decade include views from the river as well as from the bluff above. There is nothing else quite like this festive church, climbing to heaven. 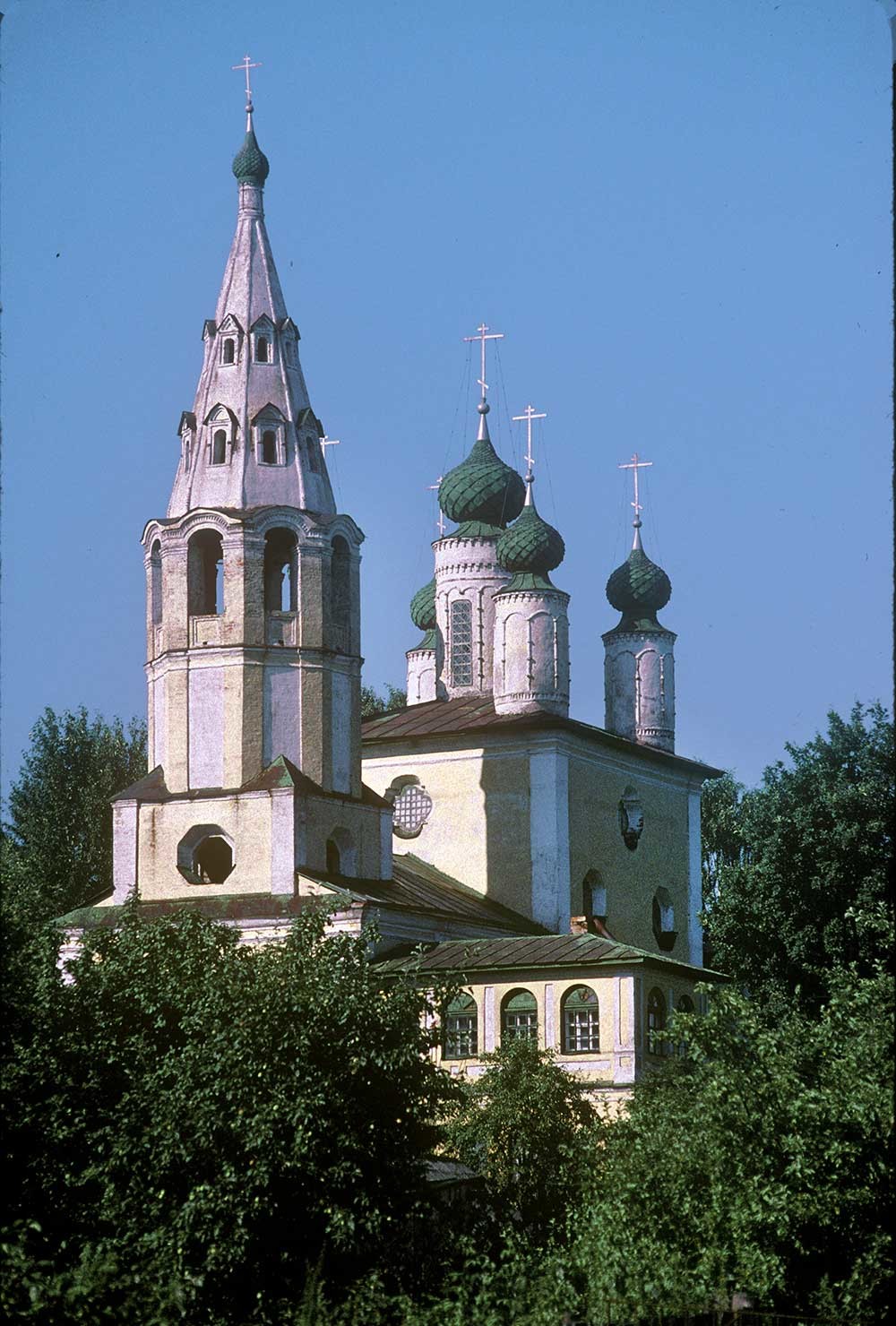