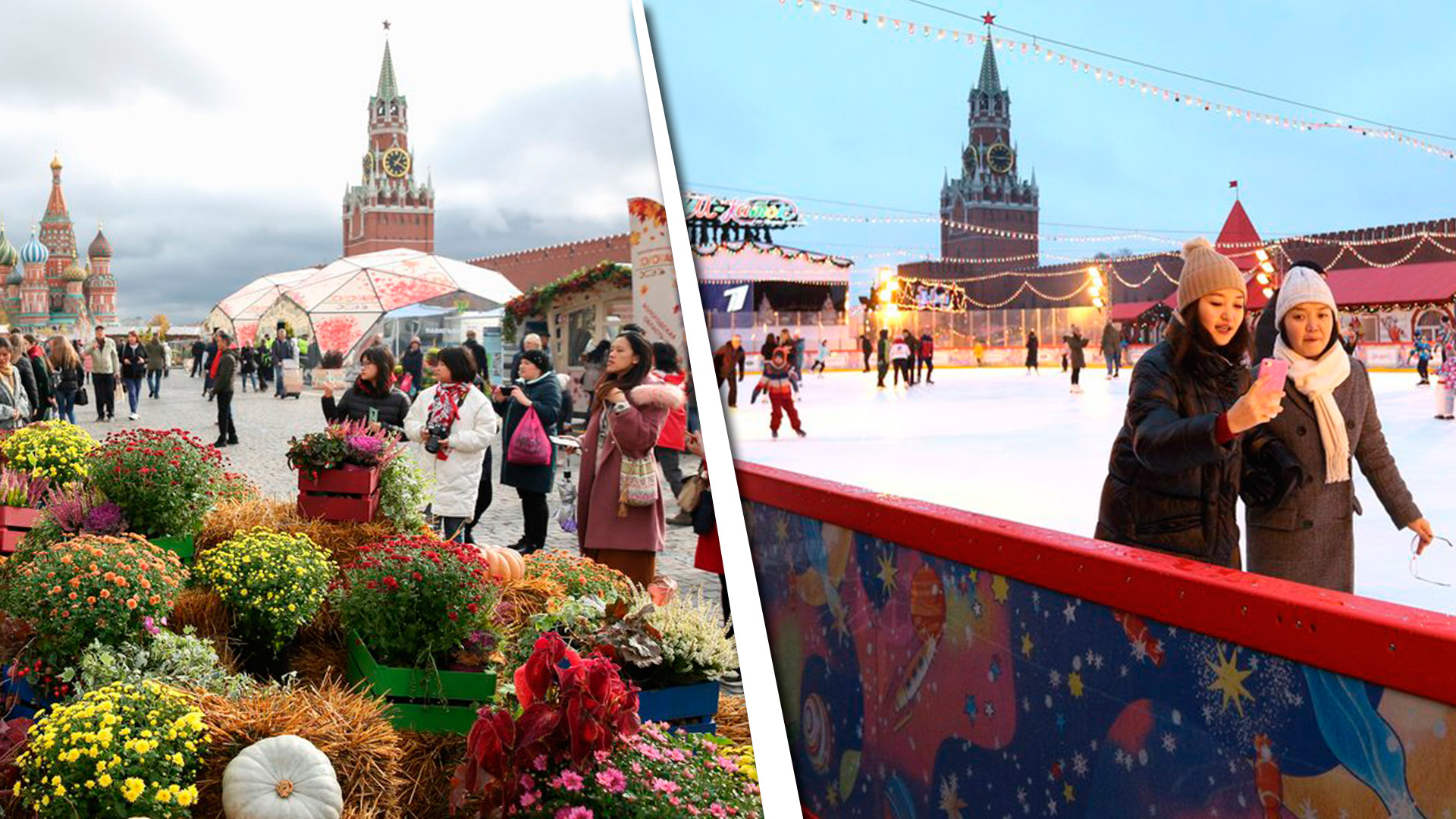 Kirill Zykov/Moskva Agency
Fall in Karelia, summer in Yakutia, winter in Moscow, spring in St. Petersburg… Check out the most popular Russian landmarks’ in seasonal metamorphoses.

Yes, yes, it sounds a bit clichéd, but the Red Square in the heart of Moscow is still the most popular destination in Russia. And it’s really beautiful in any season, isn’t it? In spring, you can find flower exhibitions and parades, in summer - book fests and concerts, in autumn - market places with delicious foods, and in winter, the Red Square turns into a cozy ice rink and becomes the best place to celebrate the New Year!

The view on the Kremlin in spring and winter.

In its long history, the Moscow Kremlin was once wooden, then white-stoned, then red-stoned; it burned, attacked, rebuilt, and always rose again. Inside the Kremlin walls, you’ll see a lot of interesting buildings and sights, including the Tsar Bell and Tsar Cannon, as well as the office of the Russian president. We suggest you also take a look at the Kremlin from the Moskva River - isn’t it beautiful?

Peterhof in spring and winter.

This gorgeous Emperor’s residence outside St. Petersburg is often compared with France’s Versailles. Incidentally, Peterhof has the largest system of fountains and cascades in the world! The most surprising are the Chess Mountain cascade, Samson fountain, and the Great cascade by the main palace. The fountain season lasts from mid-May to mid-September with a grand gala opening and closing events.

The Palace Square from above: winter and summer views.

This is the starting point of your adventure in St. Petersburg: take a look at the Winter Palace (which is now the Hermitage Museum), the Alexander Column and the Triumph Arch. Just 1 minute from the square, and you find yourself on the Neva river embankment with its picturesque view of Vasilyevsky Island. The best time to visit St. Petersburg is in the early summer, in the season of the ‘White Nights’, but, to be honest, it’s charming any time of year.

Usually, people spend their summer vacation by the lake, but it would be a pity to miss out on the beauty of the wintery blue ice of Baikal, the deepest lake on the planet! Baikal ice is famous for its incredible forms: just imagine, white circles on the blue transparent surface of the frozen water. And this ice is so strong that in winter, even speed races are held!

Spring and summmer in Kizhi.

In this ethnographic open-air museum on Lake Onega, many 17-19th century wooden buildings of the Russian North have been assembled. The architectural ensemble of Kizhi Pogost, which includes the Transfiguration Church, the Intercession of the Holy Virgin Church and the bell tower, has been included on the UNESCO World Heritage List. Although the museum operates all year-round, most tourists predictably come in the summer. Winters are rather harsh in Karelia, and there could be navigation problems in the fall and spring.

Spring and summer in Yakutia.

Tours guides say that Lena Pillars is the place that everyone should visit at least once in their life. Well, it’s hard to disagree with travel experts! In this national park, also included on the UNESCO World Heritage List, you’ll see a fantastic view of the cliffs, formed 400,000 years ago. The best time to see them is at the end of February to the beginning of March on the frozen Lena River by car, or in summer by boat.

8. Church of the Intercession on the Nerl, Vladimir Region

To reach this unique white-stone temple built in the mid-12th century, you have to pass about 1,5 km through the watery meadow from the Bogolyubovo village (where the residence of Duke Andrey Bogolyubsky once was). The church stands on the human-made hill at the confluence of the Klyazma and Nerl rivers. Legends say that this church was founded in memory of his son Izyaslav, who died in the battle at Volga, Bulgaria. The church looks very bright and elegant. Remember, it’s from the 12th century!

Solovki in winter and summer.

Solovki is a group of six islands located in the White Sea in the Russian North. This place is known for once being one of the most notorious former GULAG prisons, as well as the location of an ancient Orthodox monastery. Besides, tourists visit Solovki for its beautiful northern nature and mystical stone labyrinths.

The host town for the 2014 Sochi Winter Olympics and the favorite resort for all winter sports enthusiasts! The ski season lasts from early December to late March. However, you’ll find exciting things to do all year round: this is a great place for hiking, mountain biking, and other extreme sports.

Autumn and summer in Kalinigrad Region.

What is surprising in this park, is that on a narrow strip of land (less than 4 km wide), there are a wide variety of natural areas. Long, sandy dunes, mysterious pinewoods, sunny meadows, with a variety of wild animals, including curious foxes and speedy hares - the peaceful nature makes the Curonian Spit one of the most attractive National Parks in Russia. When planning your trip, keep in mind that Baltic autumns and winters are usually rainy.