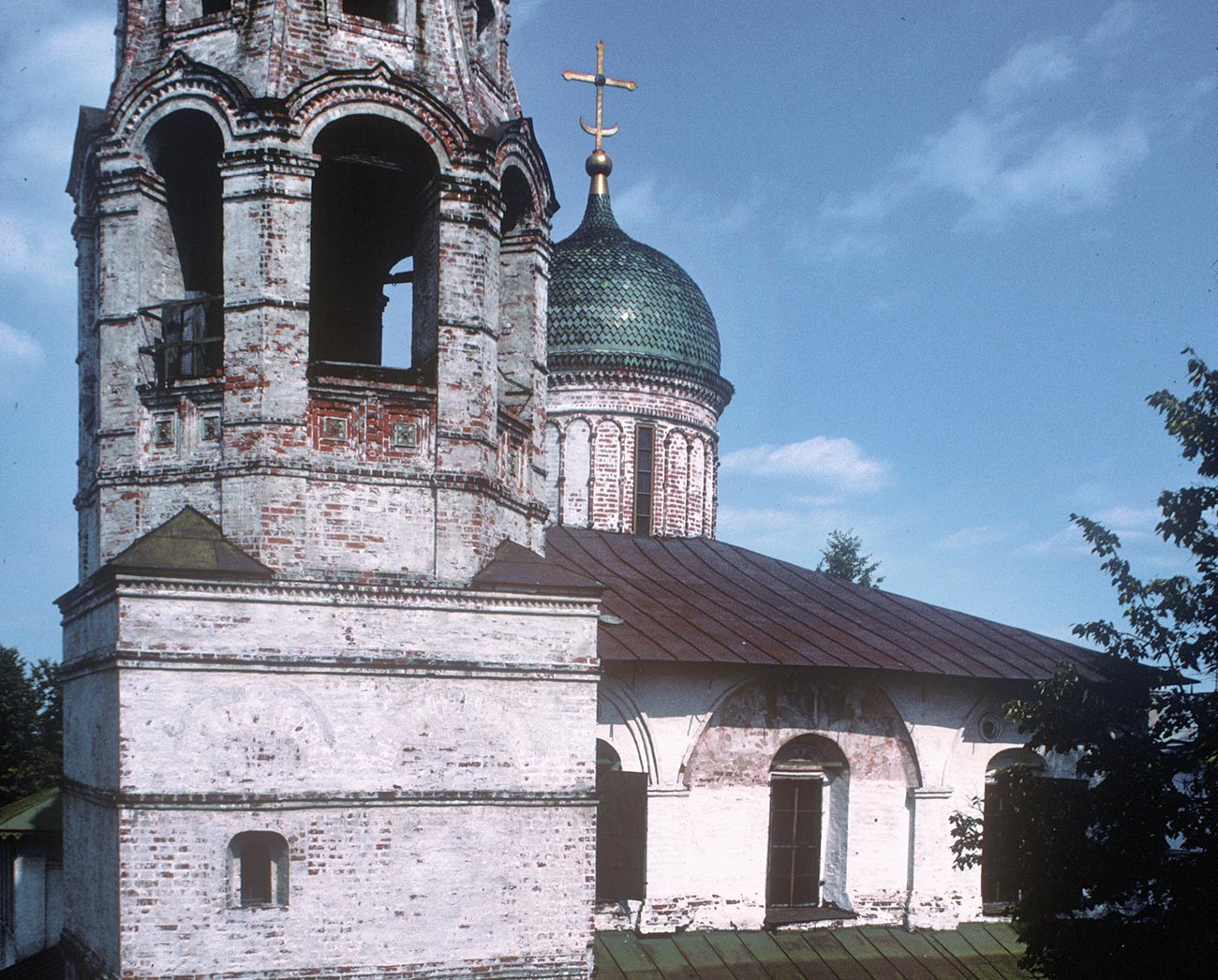 One of the richest historic towns on the Volga River is Yaroslavl, located 150 miles northeast of Moscow. Although today it is an industrial center with some 650,000 inhabitants, Yaroslavl has a remarkable concentration of church art and architecture from the 16th through the 19th centuries. Each year, thousands visit the city on river cruises or by land from Moscow. 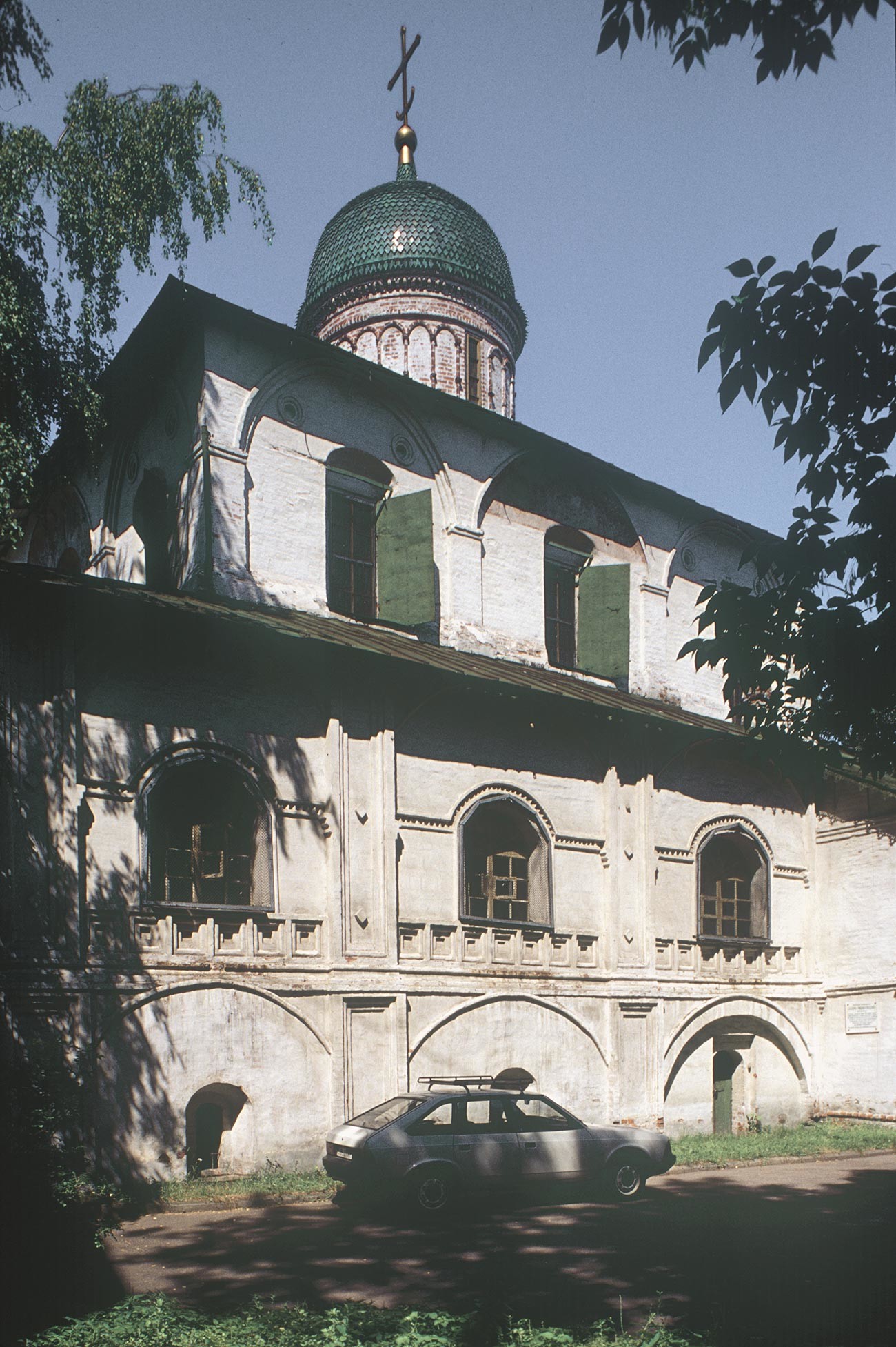 They are following in the footsteps of Russian chemist and photographer Sergei Prokudin-Gorsky, who visited the city in the summers of 1910 and 1911 as part of his efforts to document the diversity of the Russian Empire in the early 20th century.

Yaroslavl was founded in the early 11th century by the Kievan grand prince Yaroslav the Wise, one of the great rulers of medieval Rus. Its site on the Volga River was well chosen, and by the beginning of the 13th century, the settlement had monasteries with masonry churches, a sign of prosperity in those times. 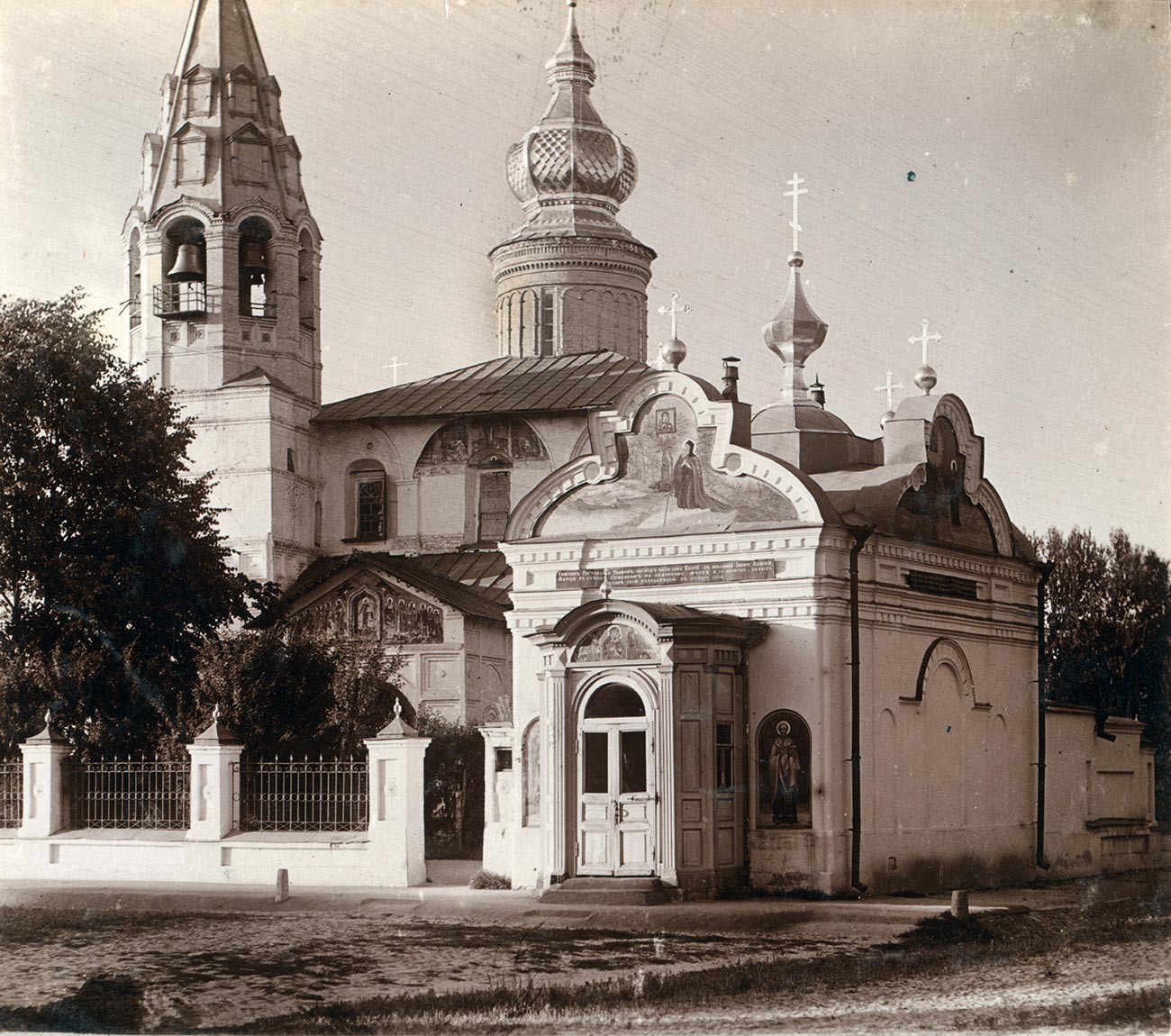 In 1238, Yaroslavl was sacked by the Mongols during their conquest of central Russia. Although recovery from Mongol dominance was slow, union with Muscovy in the 15th century integrated Yaroslavl into a larger political and economic structure. The town benefited from its location as a center not only for trade within the vast Volga River basin, but also for exploitation of the forested expanses of the Russian North. 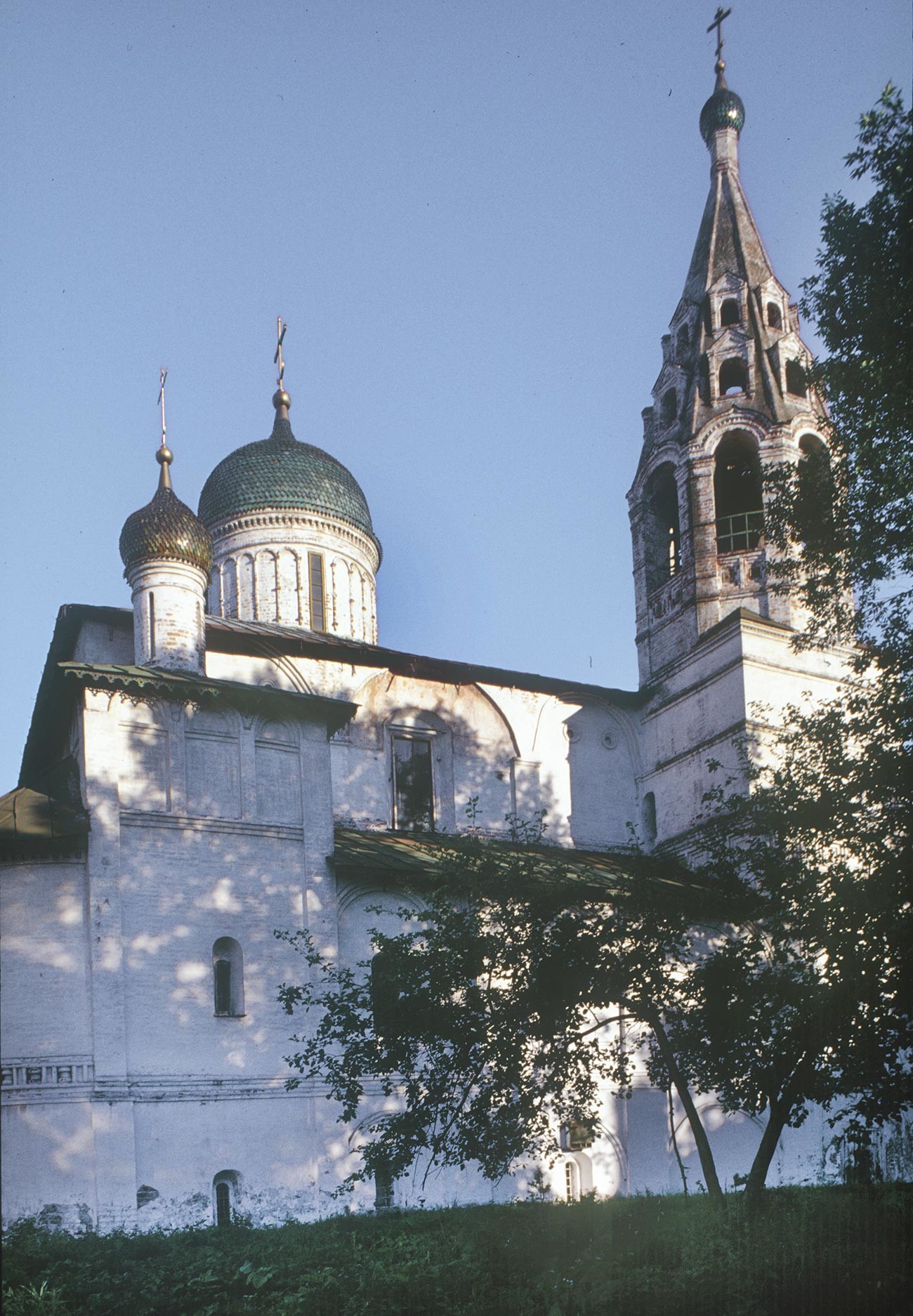 In the latter part of the 16th century, Ivan the Terrible established a port at the Archangel Monastery (Arkhangelsk) on the Northern Dvina River near the White Sea with the goal of opening Muscovy for commerce with western Europe. This enhanced Yaroslavl’s position within a mercantile network that stretched from the White Sea to Siberia and the Orient. With new trading possibilities, Yaroslavl attracted colonies of Russian and foreign merchants (English, Dutch, and German). 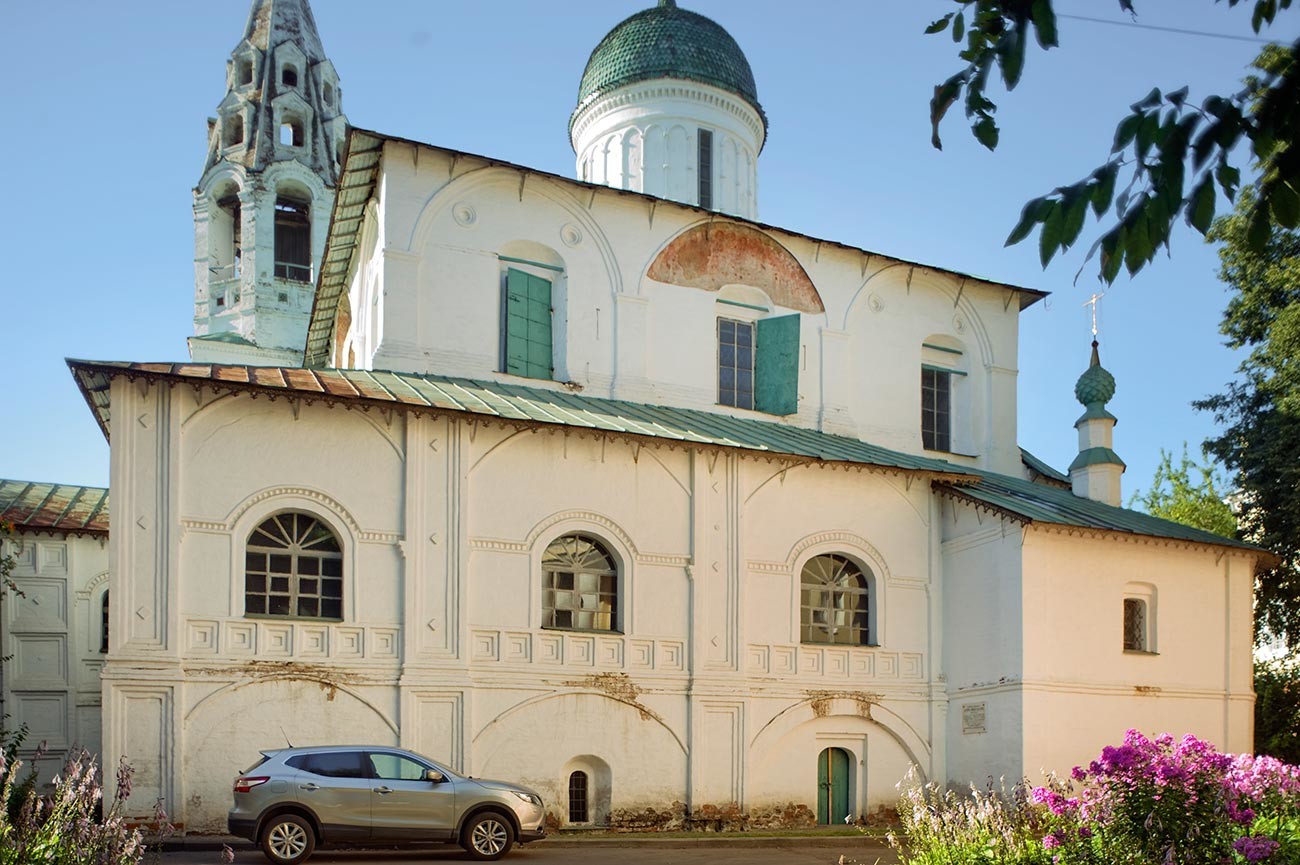 Although spared the catastrophic disorder inflicted on Russia in the latter part of Ivan the Terrible's reign, the commerce of Yaroslavl declined during the interregnum following the death of Tsar Boris Godunov in 1605. Known as the Time of Troubles, this period of political and social chaos saw much of the country plundered. Nonetheless, Yaroslavl again eluded the worst of the cataclysm and in 1612 served as a rallying point for national resistance against a Polish occupying force in Moscow.

Monument to a merchant’s success

One of the most prominent of the merchant participants was Nadeya (formally known as Epifany) Sveteshnikov (ca. 1580-1646), who reaped the benefits of Russia’s late 16th-century trading expansion. His major sources of wealth included trade in furs from Siberia and salt refining along the middle Volga River. 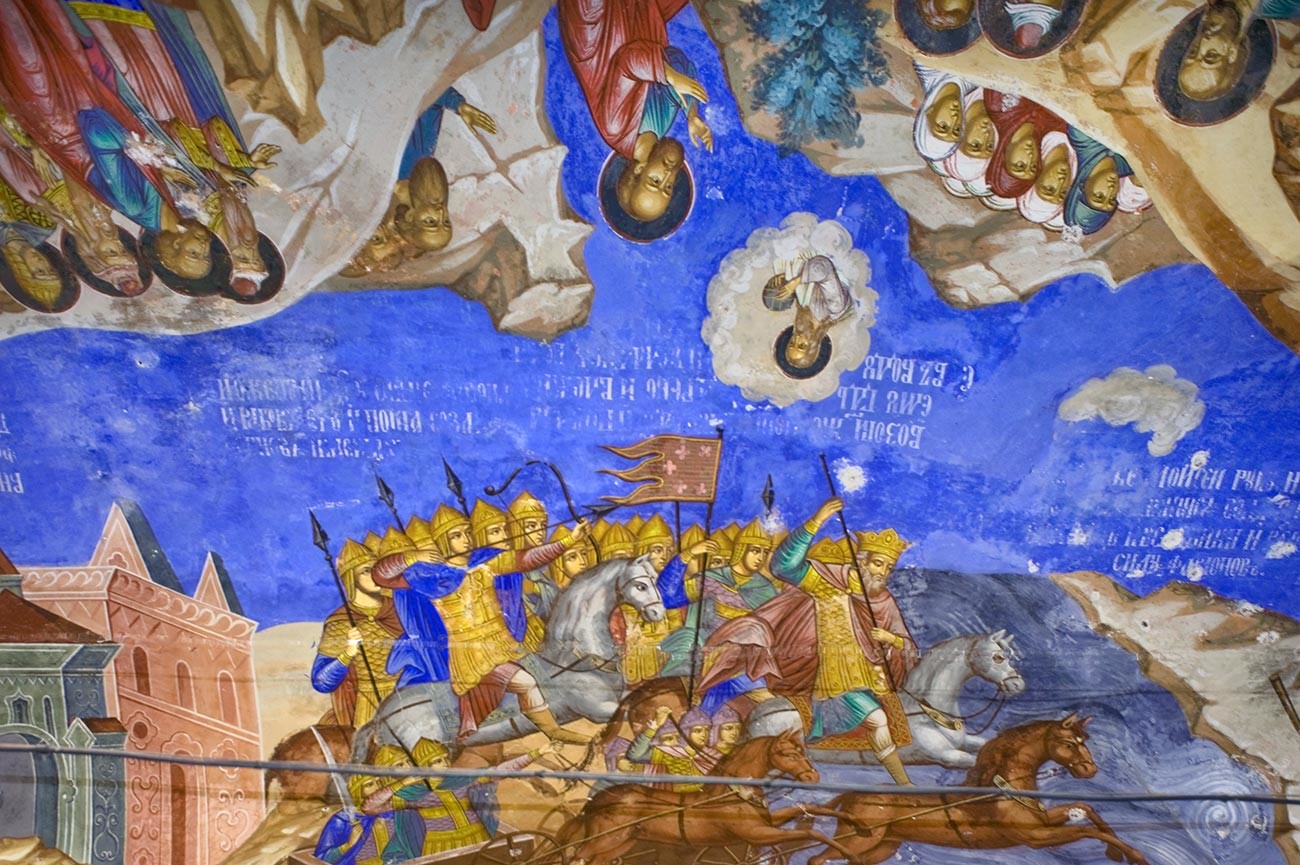 In 1611-12, he and other Yaroslavl merchants providing substantial material support for a people’s army led by Prince Dmitry Pozharsky and Kuzma Minin. In fall 1612, this army decisively defeated Polish forces that had occupied Moscow in support of a Polish claimant to the Muscovite throne.

The expulsion of the Polish-Lithuanian forces from Moscow paved the way for the founding of the Romanov dynasty the following year. The participation of Yaroslavl's merchants in this campaign of national revival brought extensive trading privileges during the reign of Michael, first tsar of the Romanov dynasty. Among the primary beneficiaries was Nadeya Sveteshnikov. 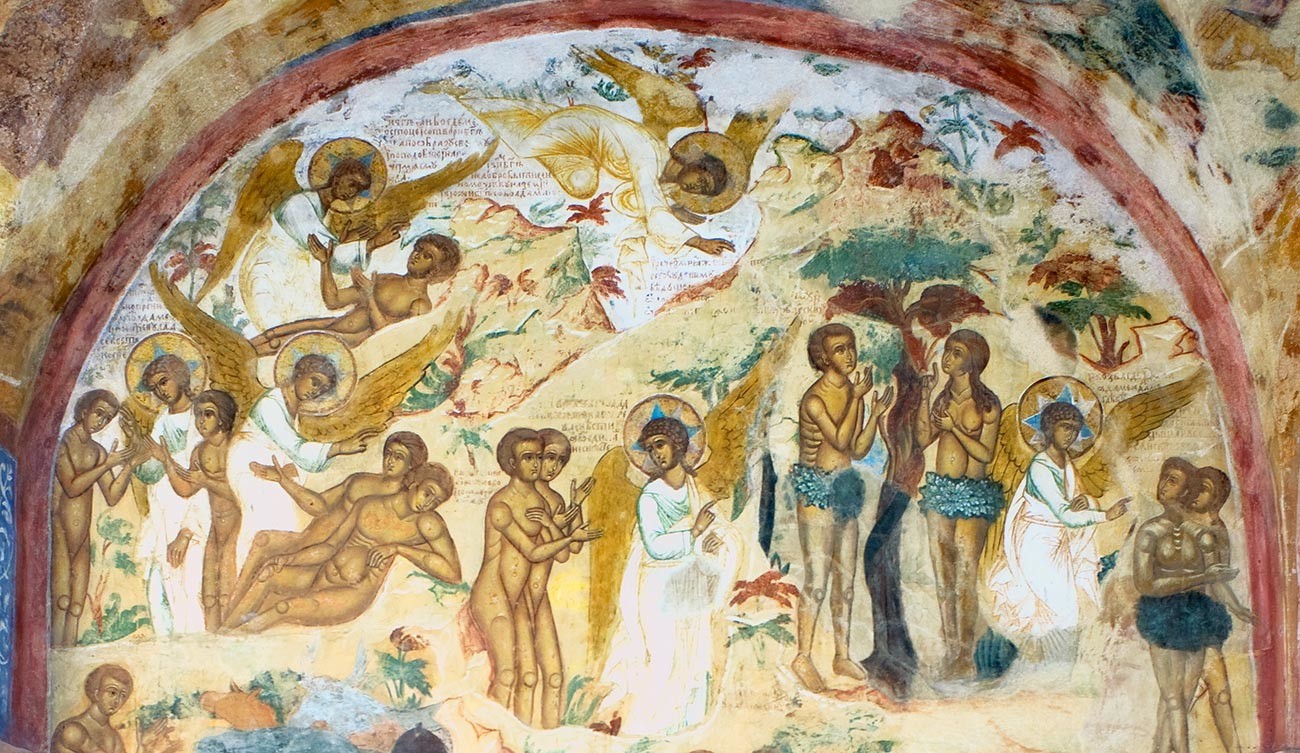 With his expanded wealth, Sveteshnikov initiated a laudable17th-century practice of merchant support for the construction of parish churches throughout the neighborhoods of Yaroslavl. During this period, 44 masonry churches were erected within the area’s 35 parishes. Only Moscow could rival Yaroslavl in its concentration of new churches, sponsored by a combination of wealthy merchants, local districts and trade associations.

The earliest of these shrines was the church that bears Sveteshnikov's first name, St. Nicholas Nadein, begun in 1620 and consecrated in 1622. Built near the high right bank of the Volga on the eastern edge of the ancient town, the St. Nicholas Nadein Church originally had five cupolas in a design characteristic of Russian church architecture from the mid-16th century. 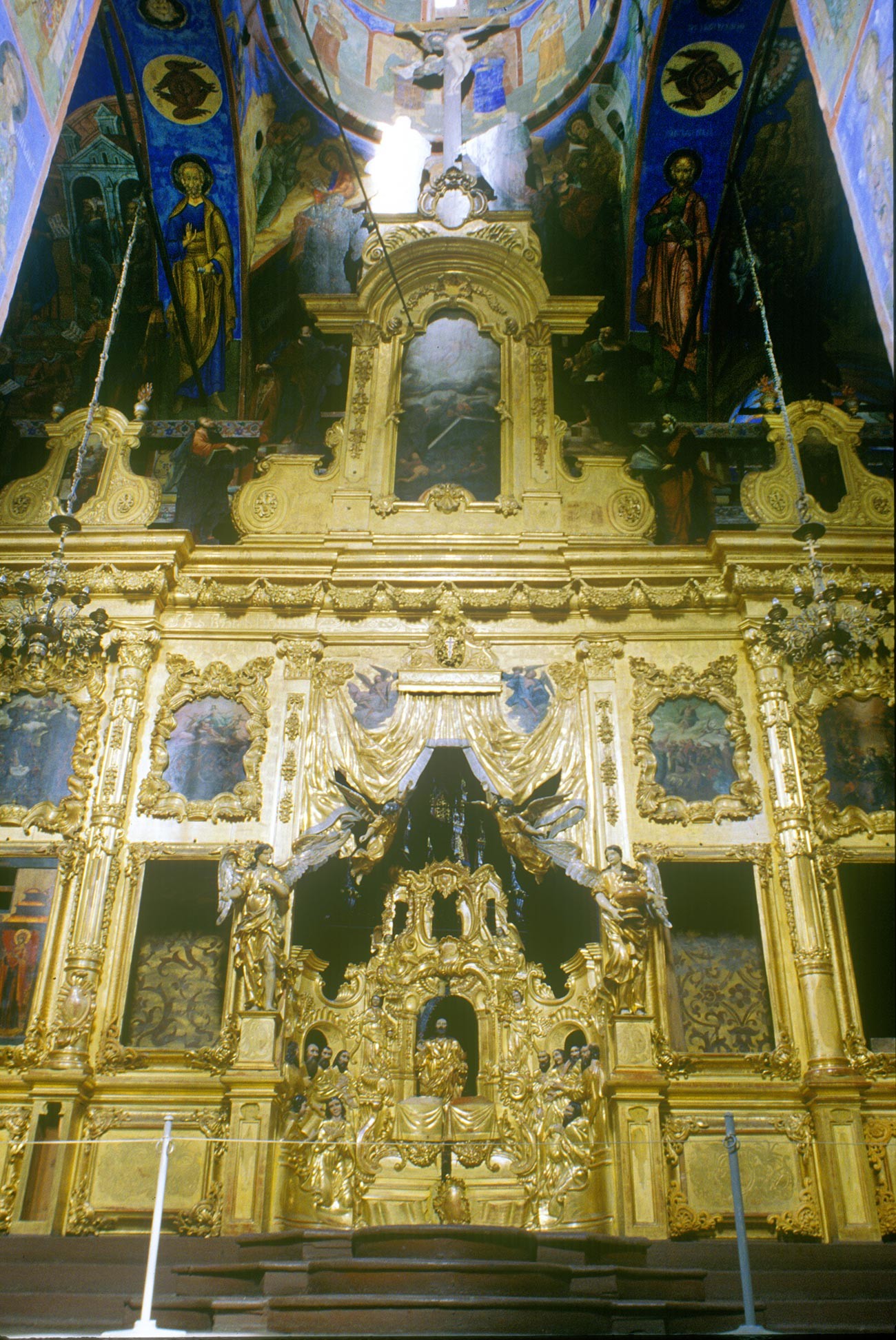 Prokudin-Gorsky photographed the Church of St. Nicholas Nadein extensively in summer 1910. The original glass 3-exposure negative of this church is missing in the Prokudin-Gorsky collection at the Library of Congress, but a monochrome image from his album of contact prints provides information about the pre-revolutionary state of the St. Nicholas Church. My photographs of the church cover a span of three decades, from 1987 to 2017.

Distinctive features of the church included domes clad in contoured glazed ceramic tiles. A bell tower anchored the northwest corner of the main structure, which was elevated on an arcaded base. This ground level served as a burial crypt for the Sveteshnikov family as well as a storehouse for his valuable commercial goods. 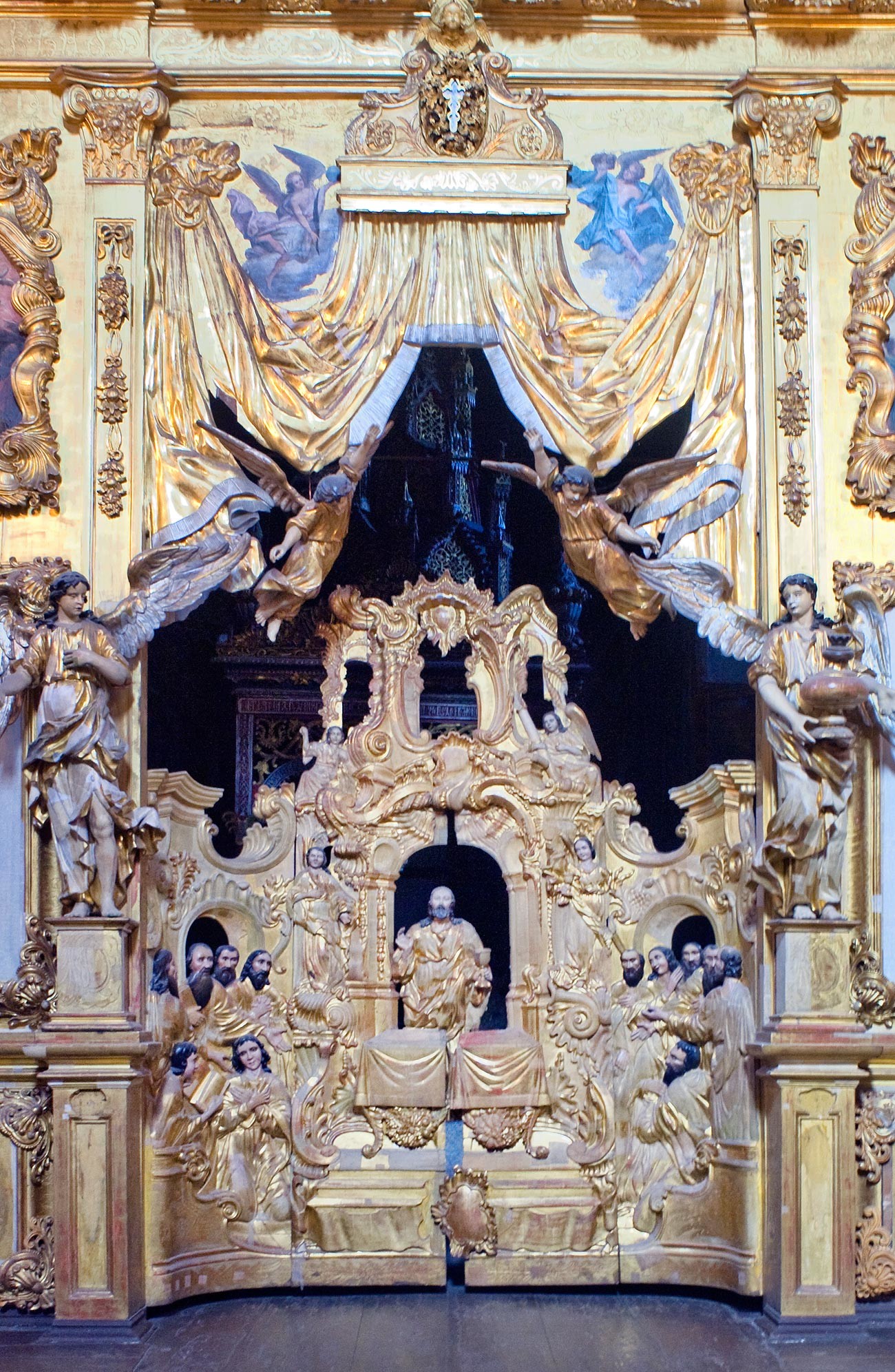 In a gesture typical of merchant donors, Sveteshnikov included a chapel for the sole use of his family. Dedicated to the Annunciation, the chapel was attached to the northeast corner of the main structure.

Subsequent modifications to the church over the next century included the dismantling of the four secondary cupolas and the leveling of the roof line. The corner bell tower was expanded in the 1690s with an additional, octagonal tier and a tall "tent" cap, which became the dominant visual feature of the church. Shortly thereafter, a small chapel dedicated to St. Alexander of Svir was attached to the south side of the structure. 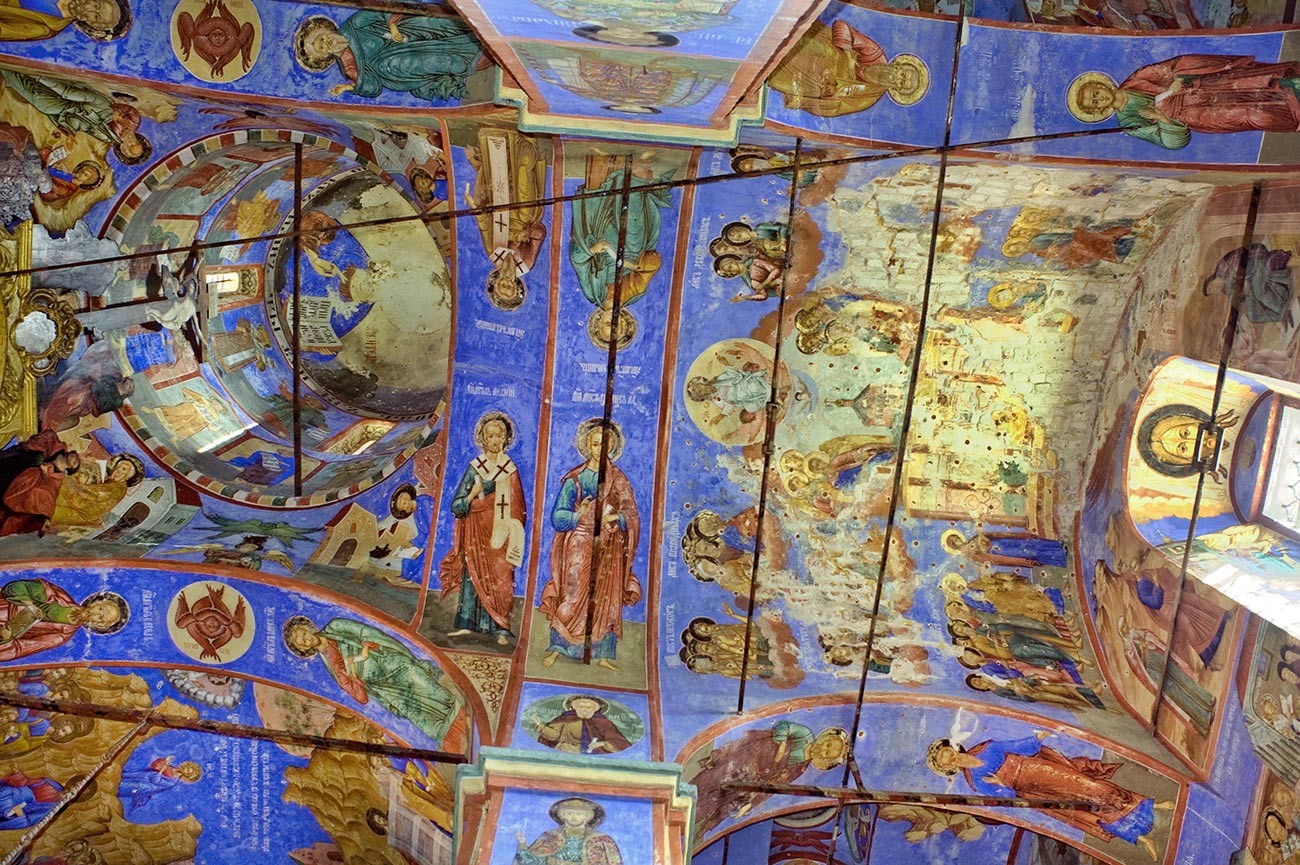 The interior of the church was painted in 1640 by a group of artists guided by Liubim Ageyev, a master painter from Kostroma down the Volga River. The many painted subjects were arranged in five registers (levels) that include episodes from the life of St. Nicholas as well as Biblical scenes. In the late 19th century, these frescoes were "refreshed" (repainted) in close conformity to the original 17th-century outlines. 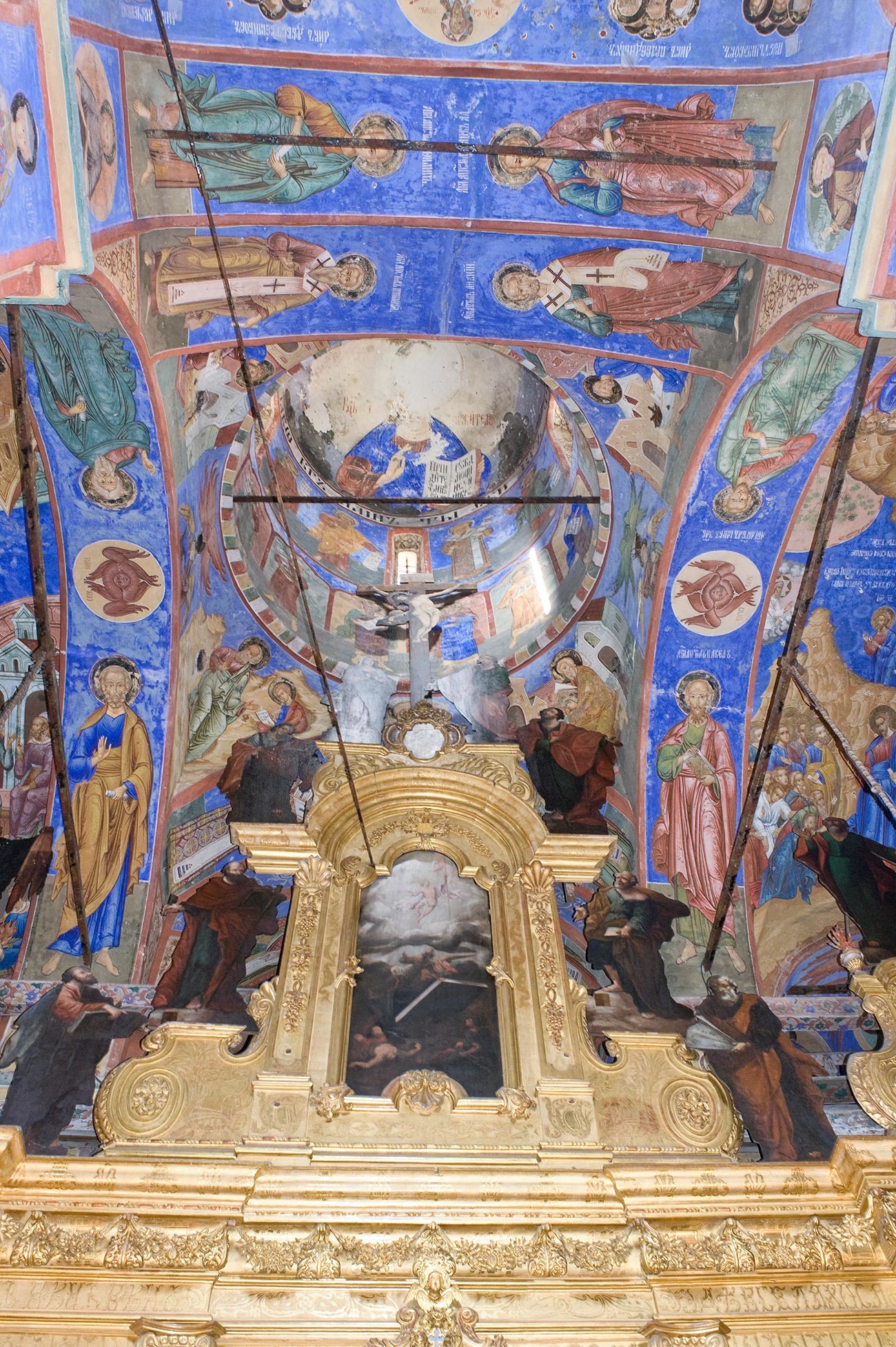 The centerpiece of the interior is a splendid baroque iconostasis installed in 1751. Although there is no evidence that Prokudin-Gorsky photographed the interior of the St. Nicholas Church, I have included a small selection of my photographs to provide a sense of this vibrant space.

The foreground of Prokudin-Gorsky's exterior view clearly shows the Chapel of the Tolg Icon of the Virgin, built in 1870 at the southwest corner of the church territory. This icon was especially venerated in the Yaroslavl region in homage to the nearby Tolg Convent. The chapel was demolished in the early 1930s as housing construction encroached on church territory. 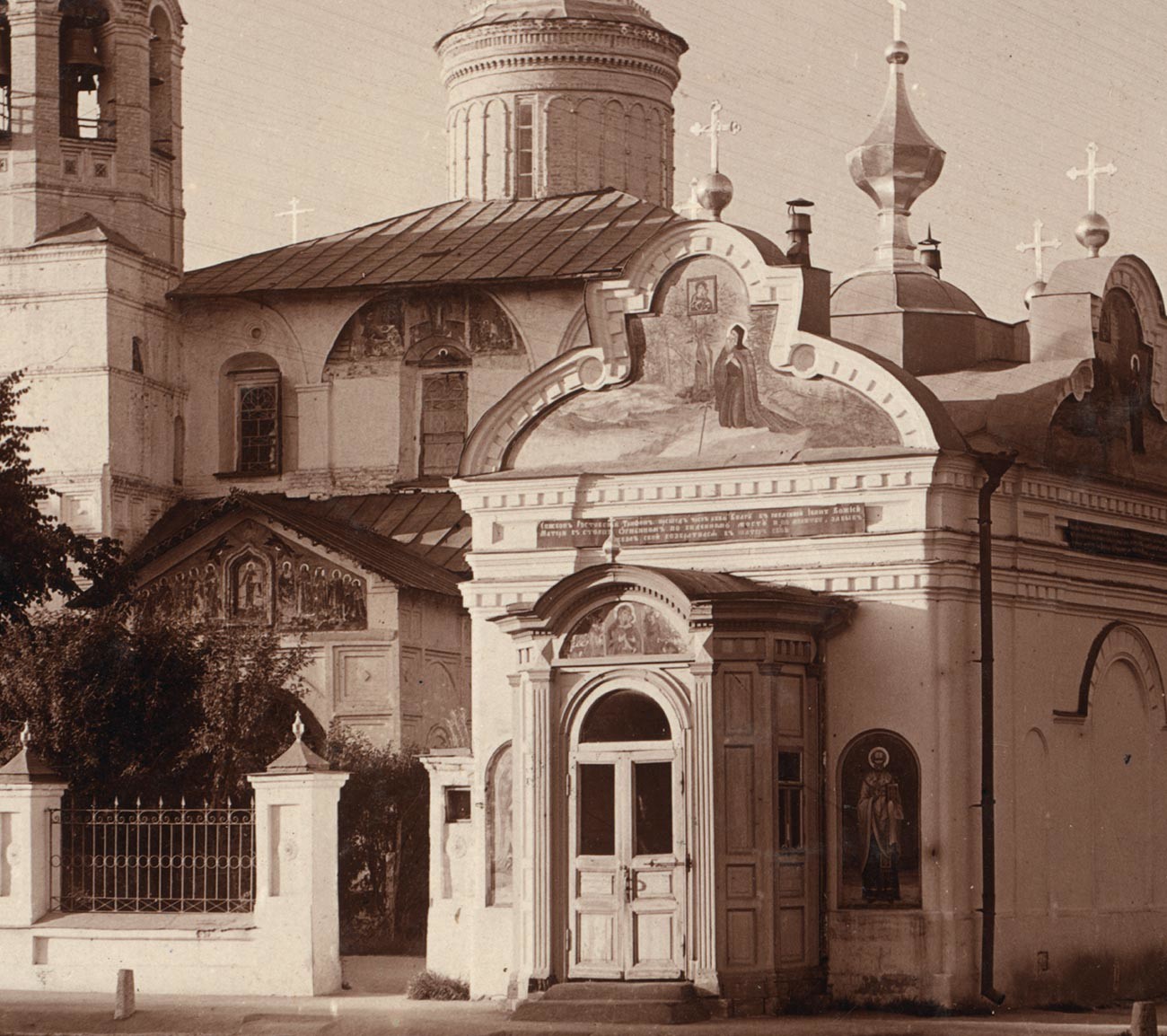 Despite its several modifications, the St. Nicholas Church has remained a major example of merchant patronage of the arts in Yaroslavl. Unfortunately, the fate of Nadeya Sveteshnikov took a radical turn for the worse in 1645 with the accession to the throne of Tsar Aleksei Mikhailovich Romanov, who coveted Sveteshnikov's profitable salt refineries. Accused of improper use of state property, Sveteshnikov was hauled to Moscow for interrogation in 1646. Already in his sixties, Sveteshnikov succumbed to the public humiliation and physical punishment. He was buried in the crypt of the church that he had built.

With the establishment of Soviet power, the St. Nicholas Church was closed in 1930 and transferred to the local history museum, which preserved it from demolition. Restoration campaigns have occurred on a regular basis since the 1950s—part of the incessant labor necessary to preserve the merchant Nadeya's greatest treasure. 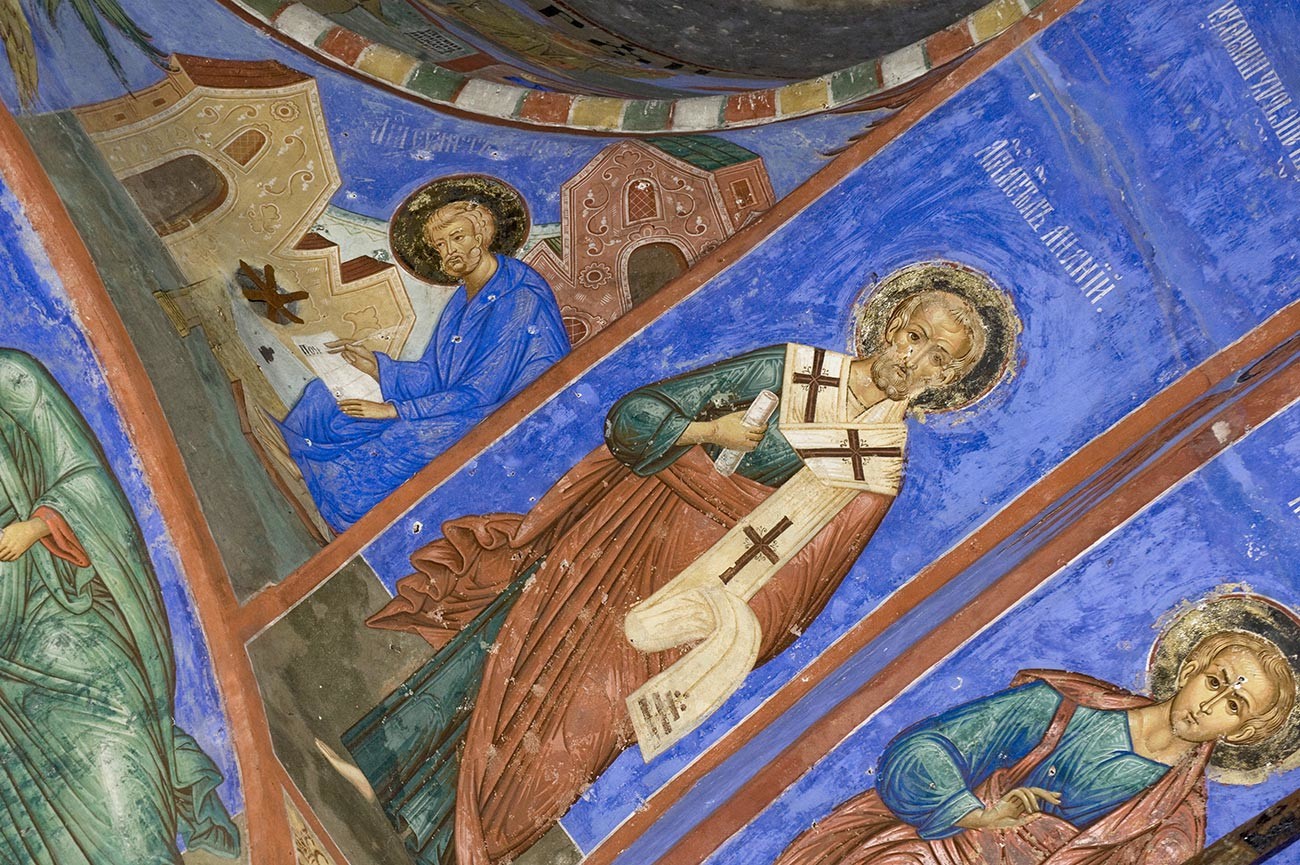