The rise and fall of Russia’s sole wooden ‘skyscraper’ 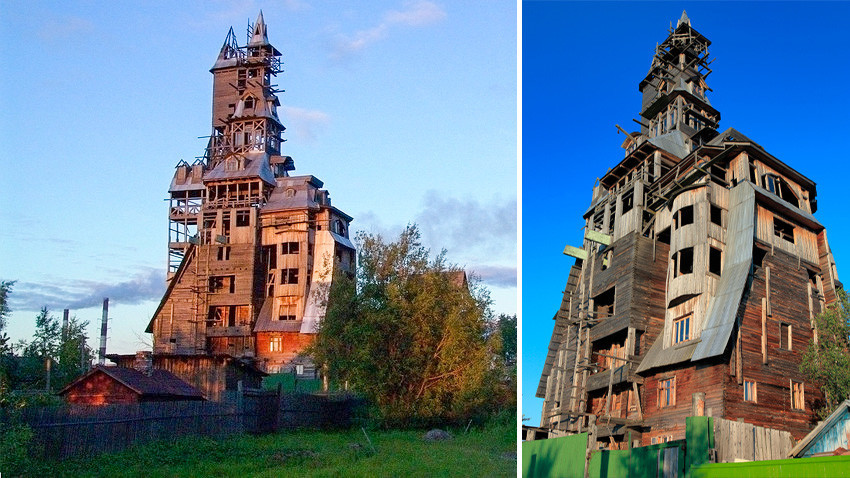 Nikolai Gernet/Sputnik, Legion Media
A chicken coop, a gangster house and Count Dracula’s palace all used to be nicknames for this notorious and unique wooden structure, which almost made it into the Guinness Book of World Records. Modeled, built and defended throughout multiple trials and attacks by 1990s businessman and entrepreneur Nikolai Soutyagin, the 13-story “skyscraper” soared over the wooden outskirts of the northern Russian town of Arkhangelsk for about 15 years, until the building’s truly tragic collapse.

The story of the wooden skyscraper’s construction began in 1991, when the Soviet Union collapsed. Nikolai Petrovich Sutyagin, an ambitious employee of a state-run construction company, quickly became a successful businessman in Arkhangelsk in the midst of thedecade’s great economic changes in Russia. Sutyagin founded no less than a dozen companies, dealing in construction, wood manufacturing and even tailoring. 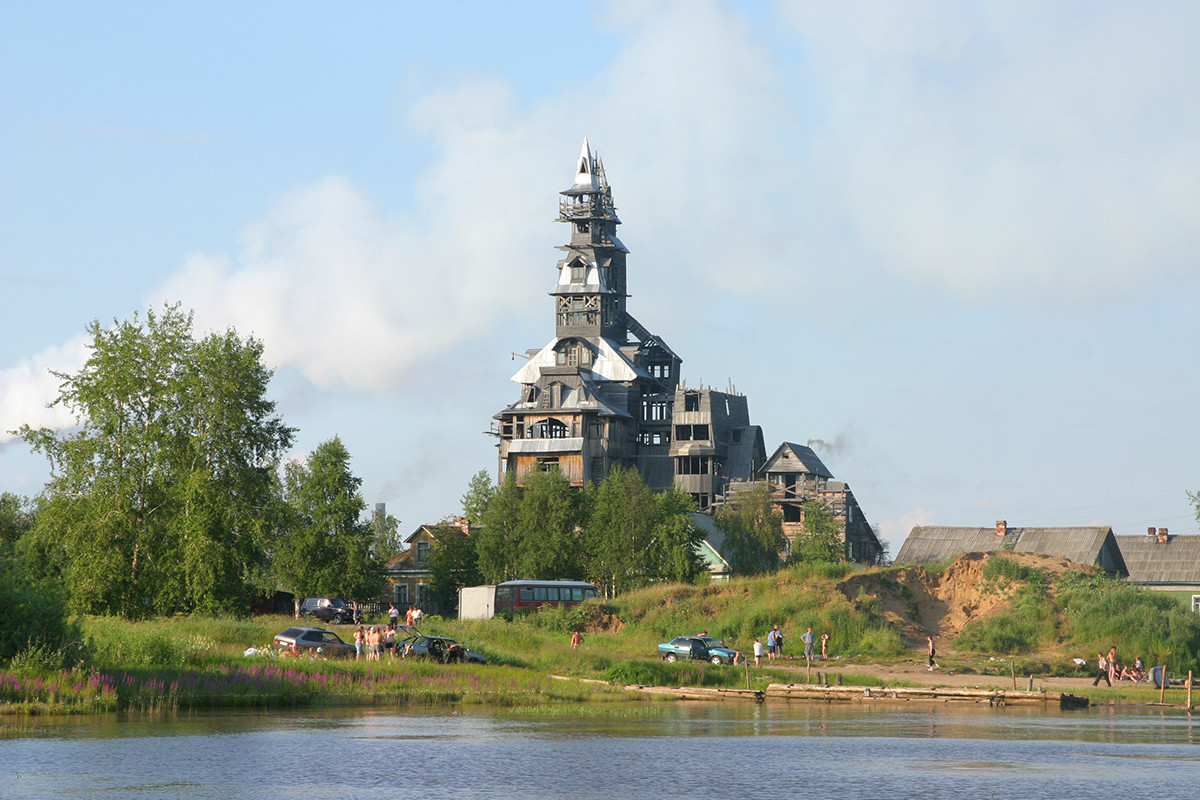 The former Soviet builder then started to grow his connections with international partners and local authorities. It was time for this self-made businessman to have a place of residence befitting his new status. And so, Sutyagin gave up his room in a communal apartment and laid the foundation for what would soon be a wooden giant in the suburbs of Arkhangelsk. The businessman chose wood, not only as the most ecological and abundant product of the region, but also as the material on which he managed to create his small empire.

After touring the world for the first time in the early 1990s, Sutyagin attempted to recreate something in accordance with his impressions of capitalist countries, as well as with his personal taste and fantasy. Especially fascinated by Gothic cathedrals in Germany and pagoda towers in Japan, the businessman decided to add some changes to his two-storey cottage, stretching it upwards. 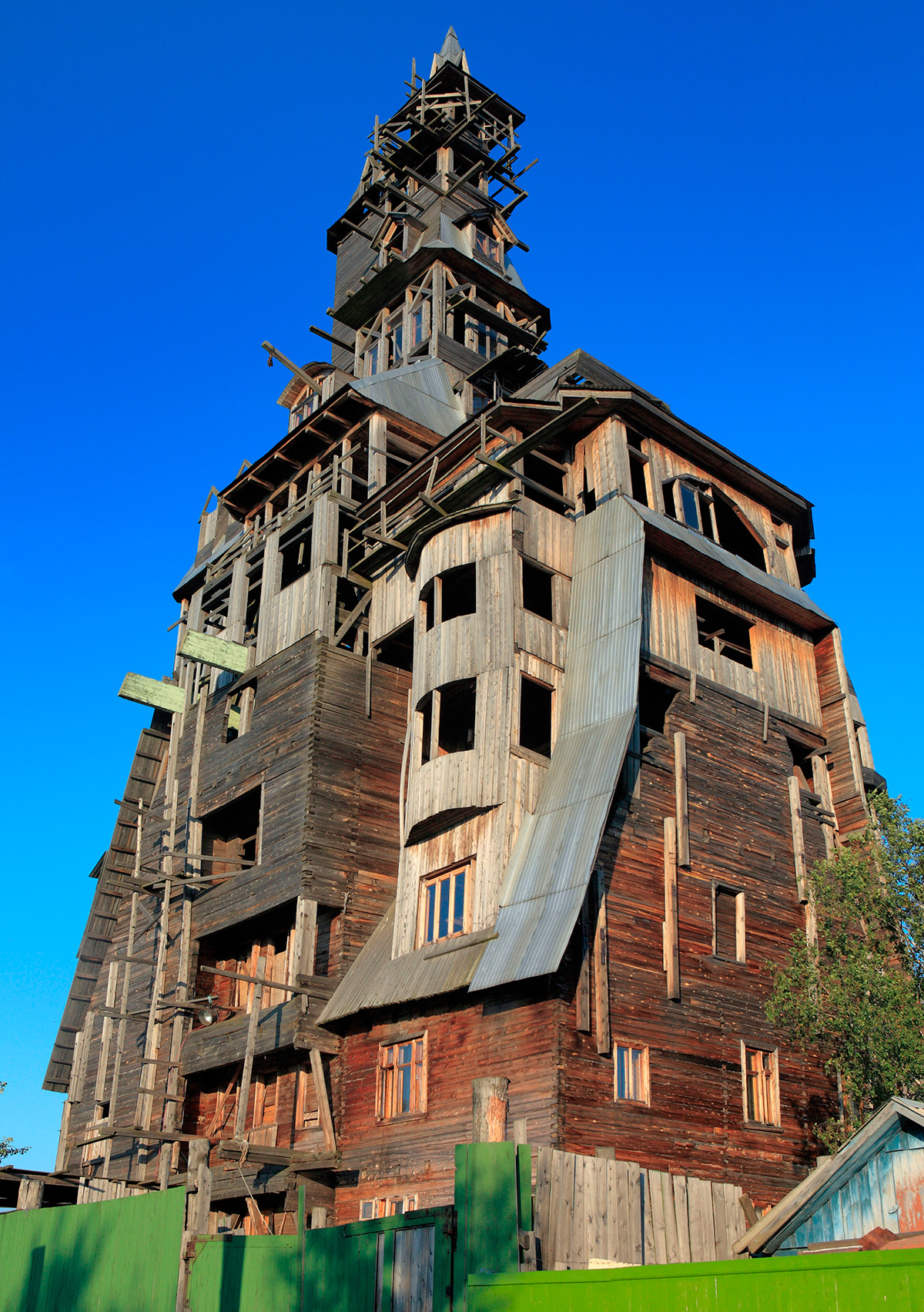 In his interviews, Sutyagin remembered that whenever he added a new floor, it wouldn’t look complete to him, so he kept asking construction workers to add more and more extra staircases and towers. His ultimate goal was to see the White Sea right from his house, notwithstanding the 40 km distance between the two.

Inspired by the idea to create this truly unique place of entertainment for his international partners and the local elites, Sutyagin managed to also erect a 5-storey bathhouse that included a dancing hall, a pool room, and a few private rooms. 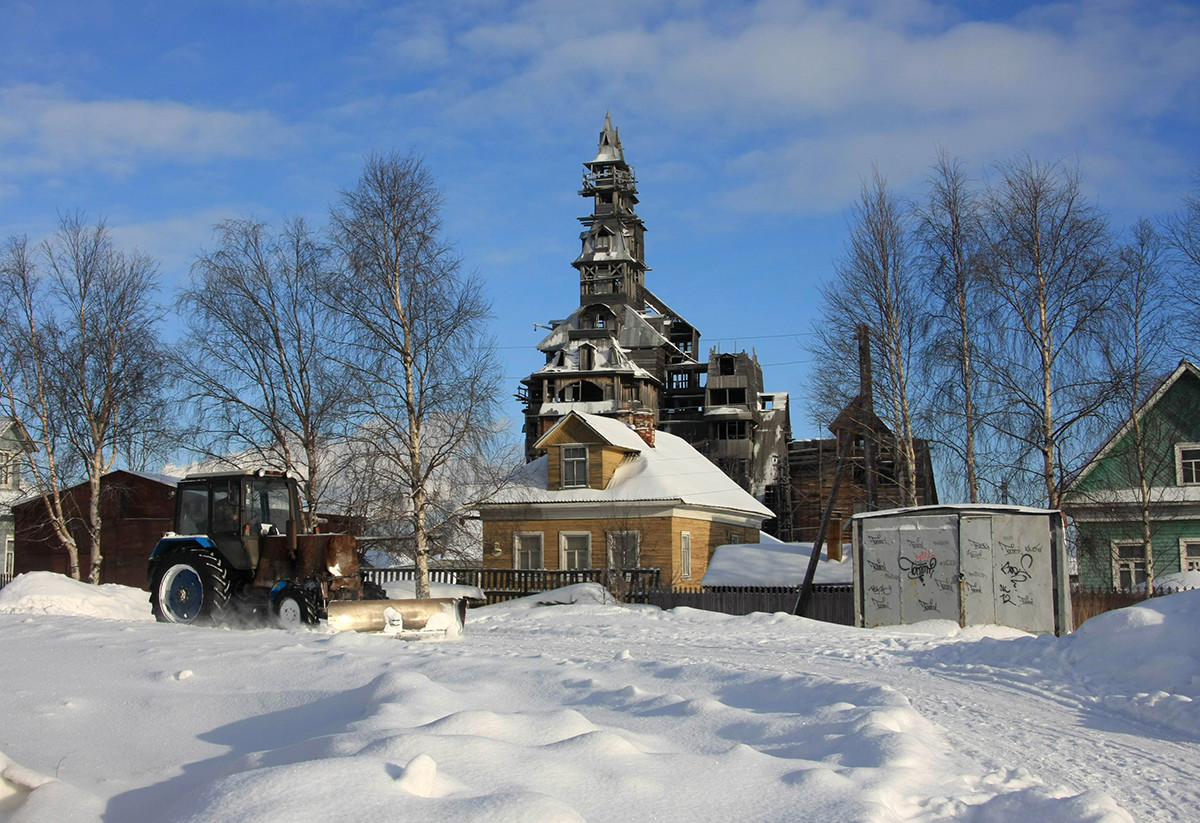 As Sutyagin’s house was growing, the international interest towards it increased, as well. For several years in the 1990s and the early 2000s, the fantasy building was indeed popular, and thousands of tourists asked their guides to add the unusual architectural piece to their tour of Arkhangelsk. At the height of its popularity, the house was even nominated to join the Guinness Book of World Records (now Guinness World Records) as the tallest wooden building in the world. 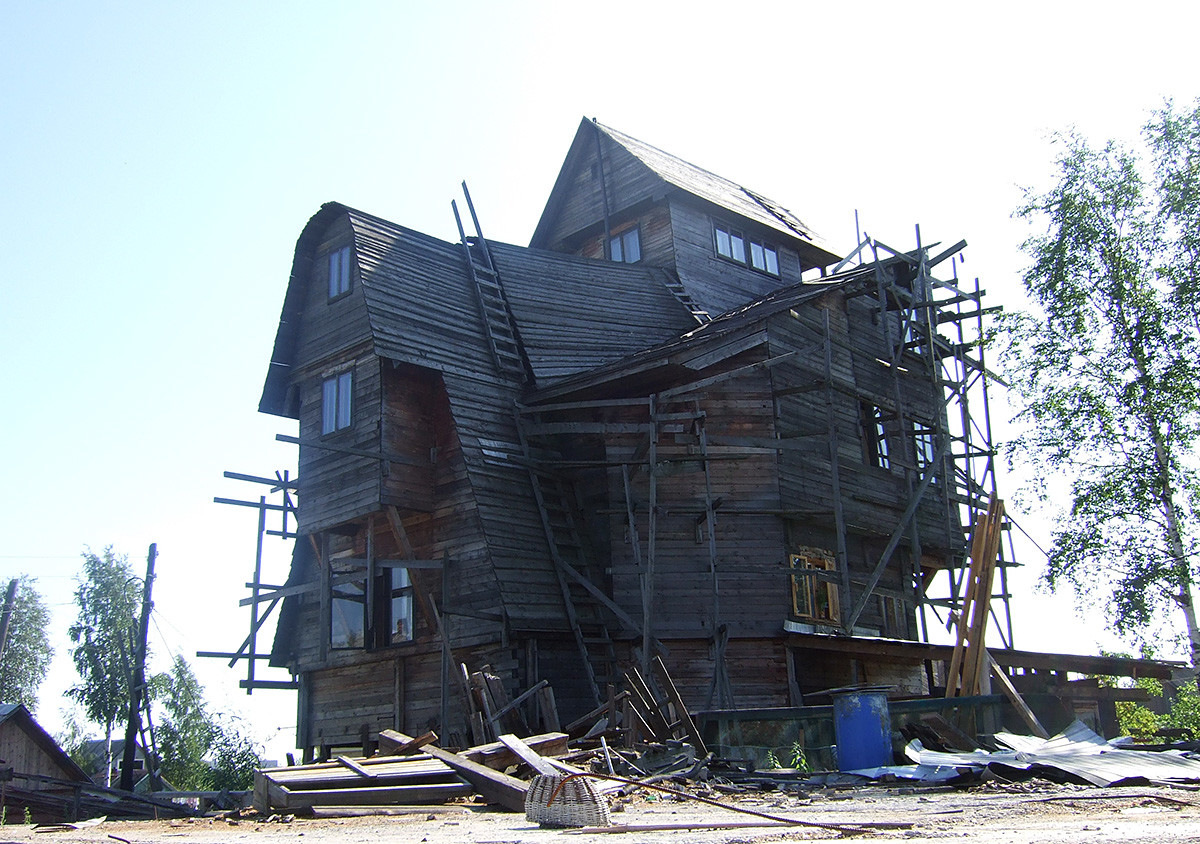 The skyscraper’s neighbours, however, had a rather different perspective on it. In numerous reports, they complained about the fire hazard the building imposed on the entire all-wooden neighborhood, as well as the building’s ominous crackling sounds when the wind blew, accompanied by intermittent falls of wooden planks or sheets into the neighbouring backyards. 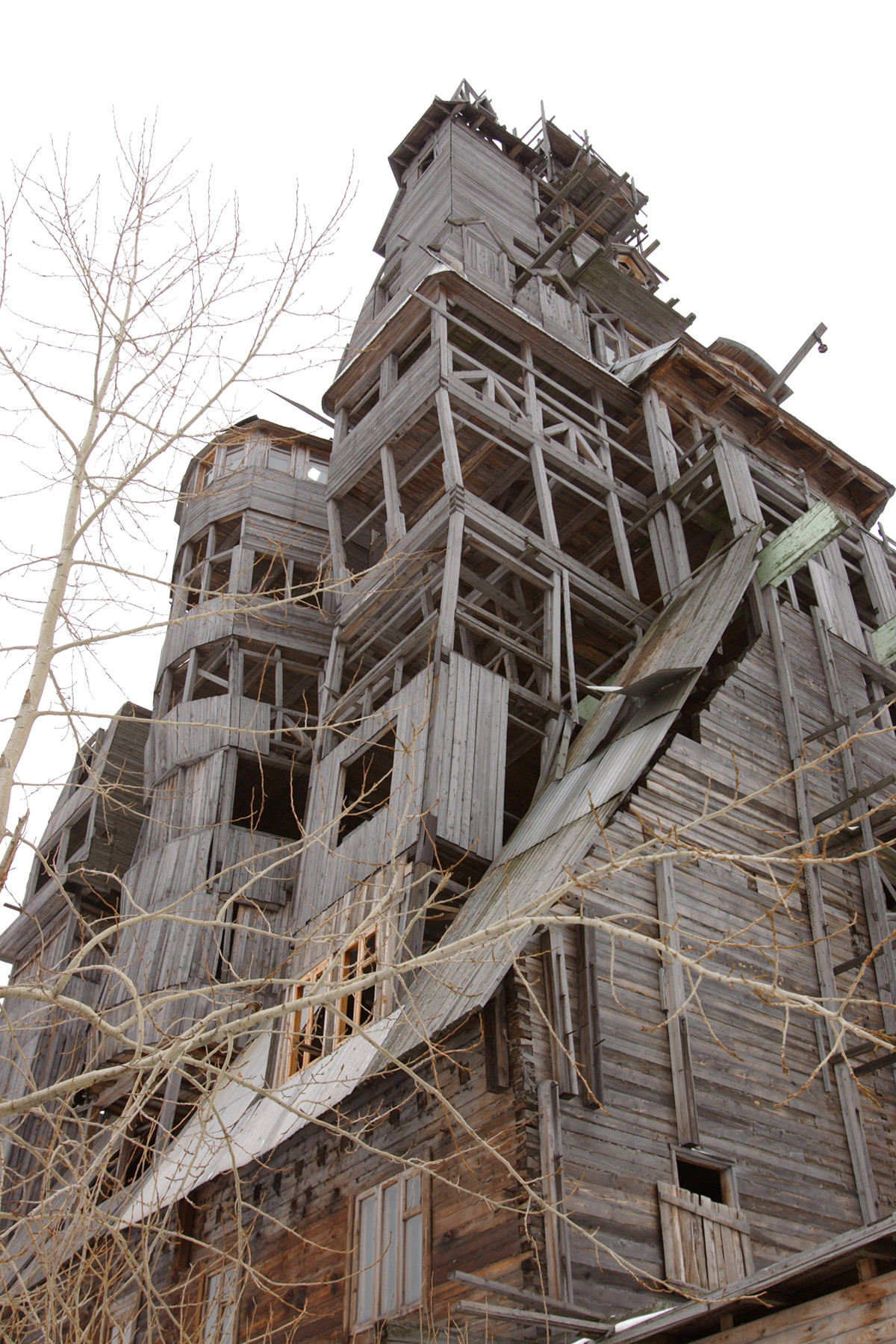 As soon as the new local authorities replaced the old, the complaints about the skyscraper received a response. The new government seized the building and opened a trial against Sutyagin, claiming that his house managed to break every possible rule, including the one that forbids private owners to erect buildings higher than two storeys without getting official permission from authorities. Indeed, since the skyscraper’s construction was going on under the indirect patronage of the permissive government of the 1990s, the building turned out to lack any architectural plan or legal ownership documents to prove its legitimacy. 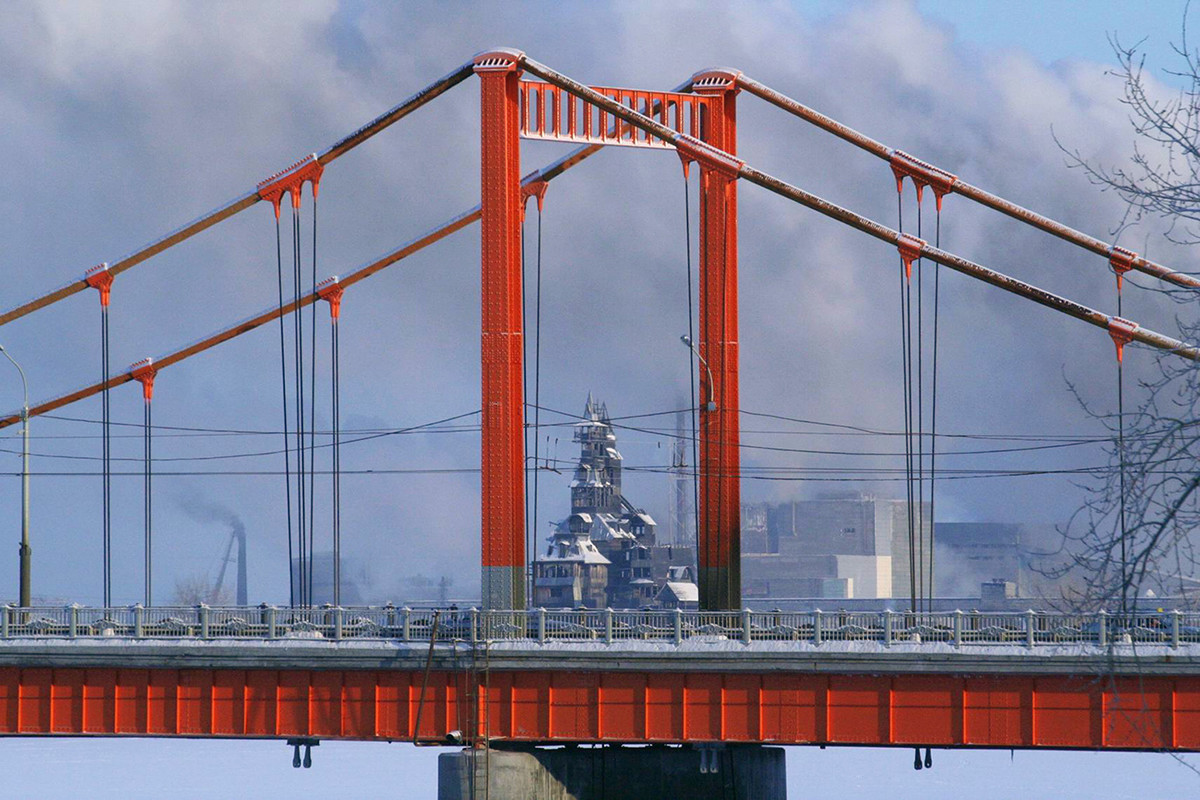 A dark era for Sutyagin’s project began. Besides being sued for his wooden giant, Sutyagin was placed in prison on racketeering charges for two years. Upon his release, Sutyagin persisted in building his house, ignoring the legal trial against the skyscraper, whose end seemed to be swiftly approaching. So, throughout the years of the trial, Sutyagin added a makeshift rooftop on either side of the building above the second floor in order to avoid the legal charges and to claim that everything rising above the rooftop were decorative additions. 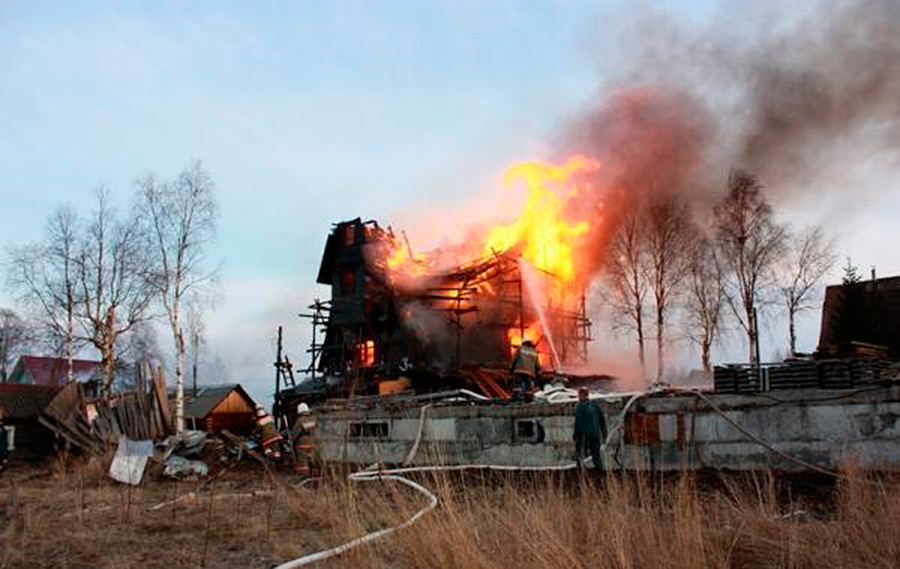 Emergency Ministry of the Arkhangelsk Region

Nevertheless, in 2008,  the court resolved that this architectural symbol of Arkhangelsk from the 1990s should be demolished, because it didn’t have any legal or logical underpinnings. By the end of its ‘life’, the skyscraper was 44 meters (144 ft.) tall. The building was cut down to its fourth floor and remained until the 5-storey bathhouse caught fire and engulfed the remnants of Sutyagin’s dream in 2012. 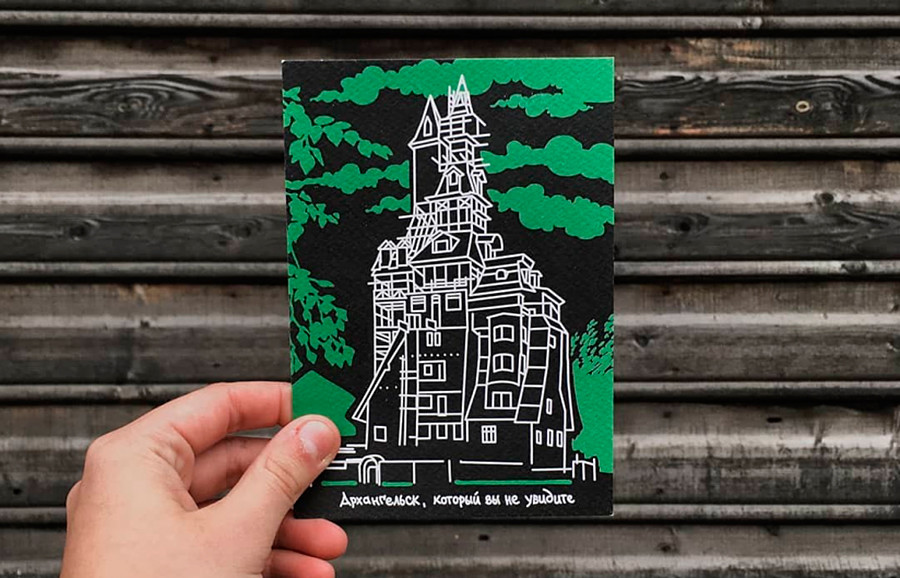 However, former entrepreneur and businessman Sutyagin still hasn’t given up: he is still trying to get compensation for his unique house’s destruction and to build a new symbol of his aspirations and dreams. But as of today, we can only find this sole example of fantasy architecture only in photographs or in a series of postcards, called ‘The Arkhangelsk that you won’t see’.