Discovering the historic neighborhoods of Perm 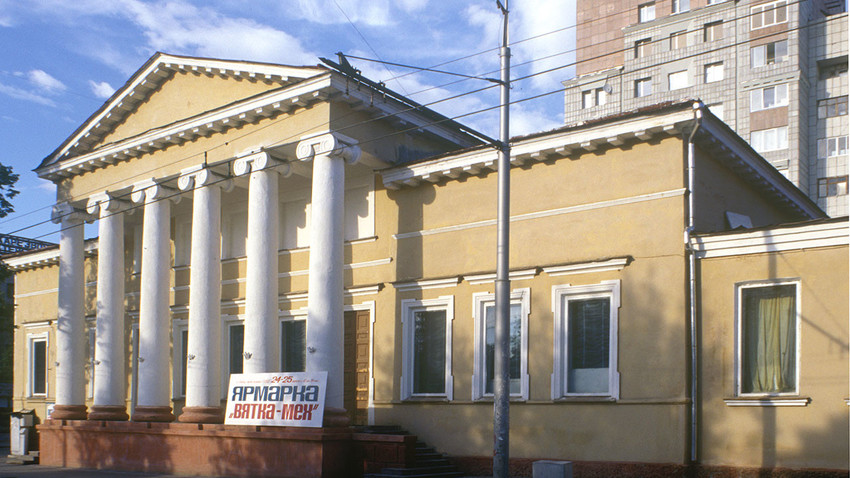 The city of Perm, a major industrial and administrative center located just on the European side of the northern Urals, extends for miles along the high east bank of the Kama River. It was a destination of particular interest for Russian photographer and chemist Sergei Prokudin-Gorsky (see box text below), who visited the city on his first trip to the Ural Mountains in 1909.

Prokudin-Gorsky captured a series of riverfront vistas from the just-completed massive railroad bridge across the Kama. But he also took his tripod-mounted camera to the hillocks to the east of the city, where he photographed panoramic views of the central district that give a sense of Perm’s urban neighborhoods. 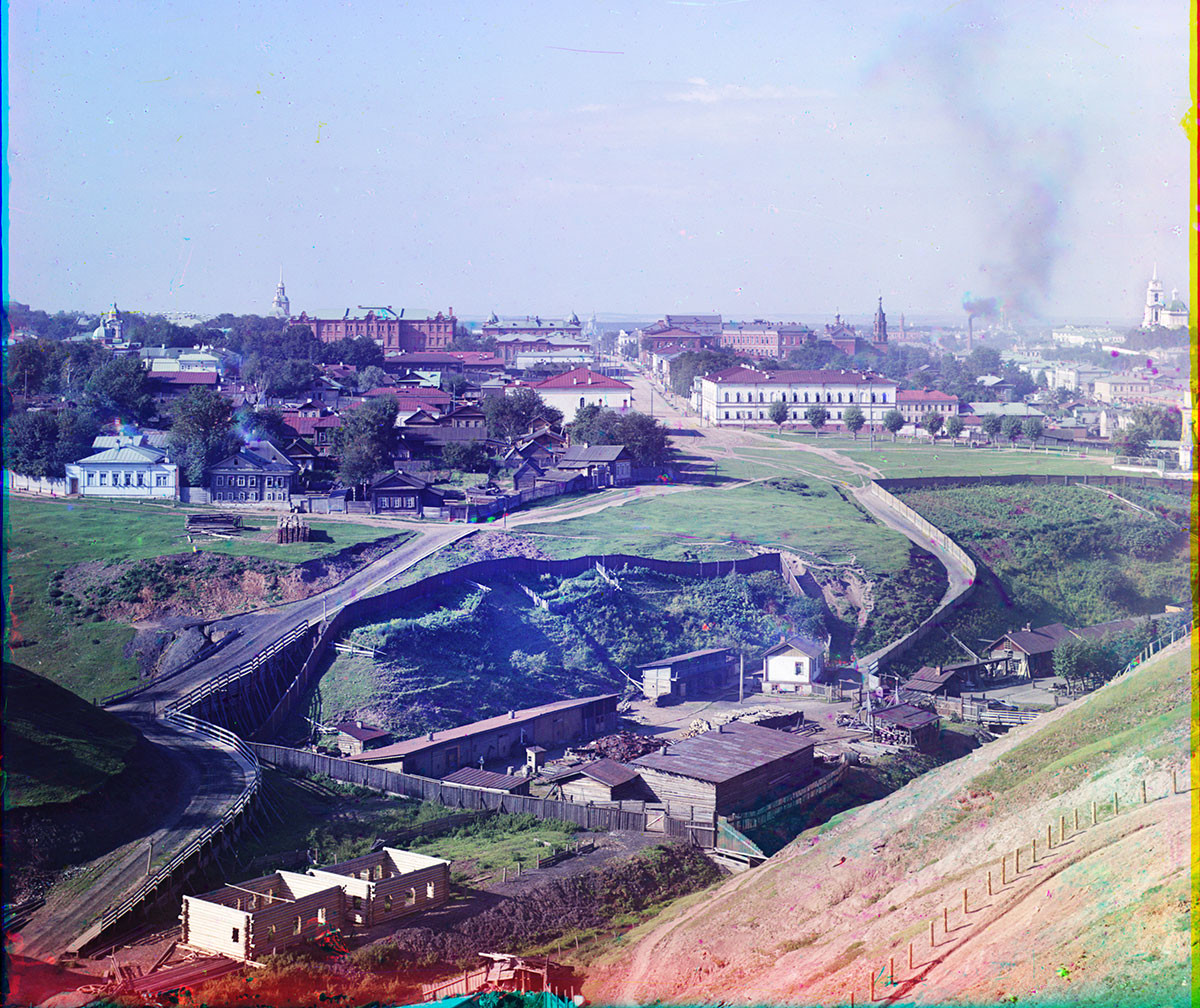 My first visit to the Perm region occurred nine decades after Prokudin-Gorsky, in the summer of 1999. Subsequent trips, in 2014 and 2017, revealed a city marked by major new construction.

The name “Perm” is documented as early as the 12th-century chronicle “Tale of Bygone Years” and is apparently derived from Finno-Ugric words pera ma, meaning "distant land." In the medieval period "Perm" designated territory in the northern Urals controlled by the economic power of Novgorod, whose hunters and traders reaped the bounty of its valuable furs. By the 17th century, much of the area belonged to the vast Stroganov holdings in the northern Urals.

The settlement of Perm originated in the early 18th century as part of the quest by Peter the Great to exploit ore deposits in the Ural Mountains. These raw materials provided secure sources of essential industrial-grade metals needed above all for the army.

The guiding force in developing this area was Vasily Tatishchev (1686-1750), one of Russia's early professional historians. A scholar with a gift for practical activity, Tatishchev admired Peter the Great and was an influential proponent of the central role of autocrat and state in Russian history.

During the 1720s, Tatishchev established settlements at mines, smelters, and metal-working plants throughout the Urals, including Yekaterinburg. In 1720, he chose the 17th-century village of Yegoshikha, located near the small Yegoshikha River, a tributary of the Kama. The stream is hardly visible in the ravine in the foreground of Prokudin-Gorsky’s rich panoramas.

Construction began on the main Yegoshikha factory on May 4, 1723, which is considered Perm’s founding date. The name “Perm,” however, was officially adopted only in 1781 after a command by Catherine the Great that transformed the factory settlement into an administrative center for the Urals.

Because of its favorable location within the Volga River basin, Perm during the 19th century developed into a transportation center for salt and other minerals, ​as well as ​metal ore​ and the products of metal factories throughout the western Ural Mountains. In 1846 regular steamboat service appeared on the Kama.

Much of Perm burned during a fire in 1842, but the town quickly recovered. In 1863, Perm was included in the main Siberian highway, and in 1878, construction was completed on the first phase of the Urals Railroad from Perm to Ekaterinburg, part of a railroad construction boom that culminated in the early 20th century with the completion of the TransSiberian Railway.

Perm’s growth at the turn of the 20th century was reflected in Prokudin-Gorsky’s overviews of the central city, with its belching smokestacks. Despite sweeping changes in the century following Prokudin-Gorsky’s visit, several of the buildings captured in his photographs remain.

A historical record in images 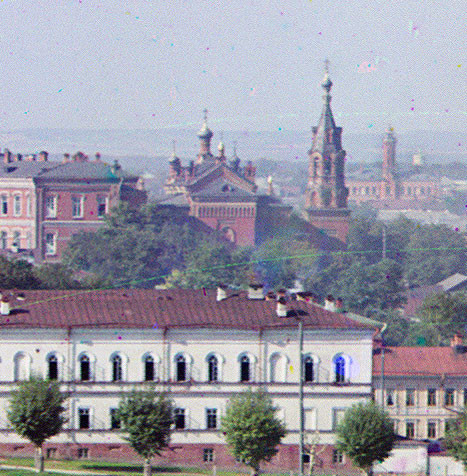 The photograph richest in detail is a panoramic view taken due west from the city hillocks located to the east of the central district. On the far right is Monastery Street with its dominant landmark, the Transfiguration Cathedral, visible through the haze of industrial smoke. This street links a series of monuments surveyed in my previous Perm article.

The next thoroughfare to the left was Trading (now Soviet) Street. Its main landmark (apart from a belching smokestack) is the bell tower and cupolas of the Church of St. Nicholas, built in 1895-99 to commemorate the marriage of soon-to-be-emperor Nicholas and Alexandra in 1894. The church was attached to the large Mariinsky Women’s High School. 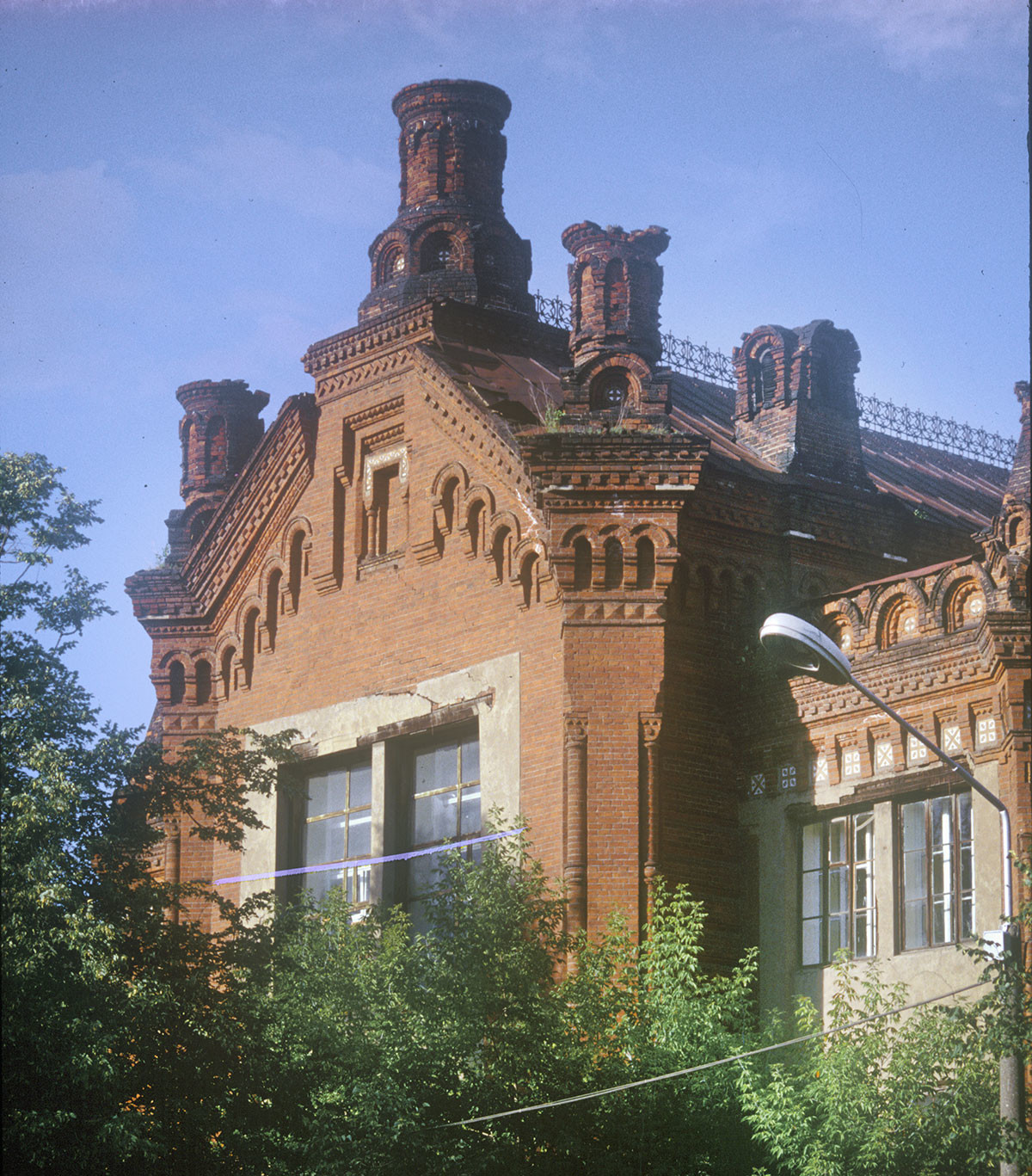 With the establishment of Soviet power, the St. Nicholas bell tower and cupolas were demolished, and the entire building was converted for the use of the Agriculture Academy (now a university). My photographs from 1999 reveal that most of the basic red brick structure has survived.

Dimly visible just beyond is the red brick watch tower of the central Perm fire station. Completed in 1883, the tower and its surrounding depot are still maintained in their original function, as my 1999 photograph shows. 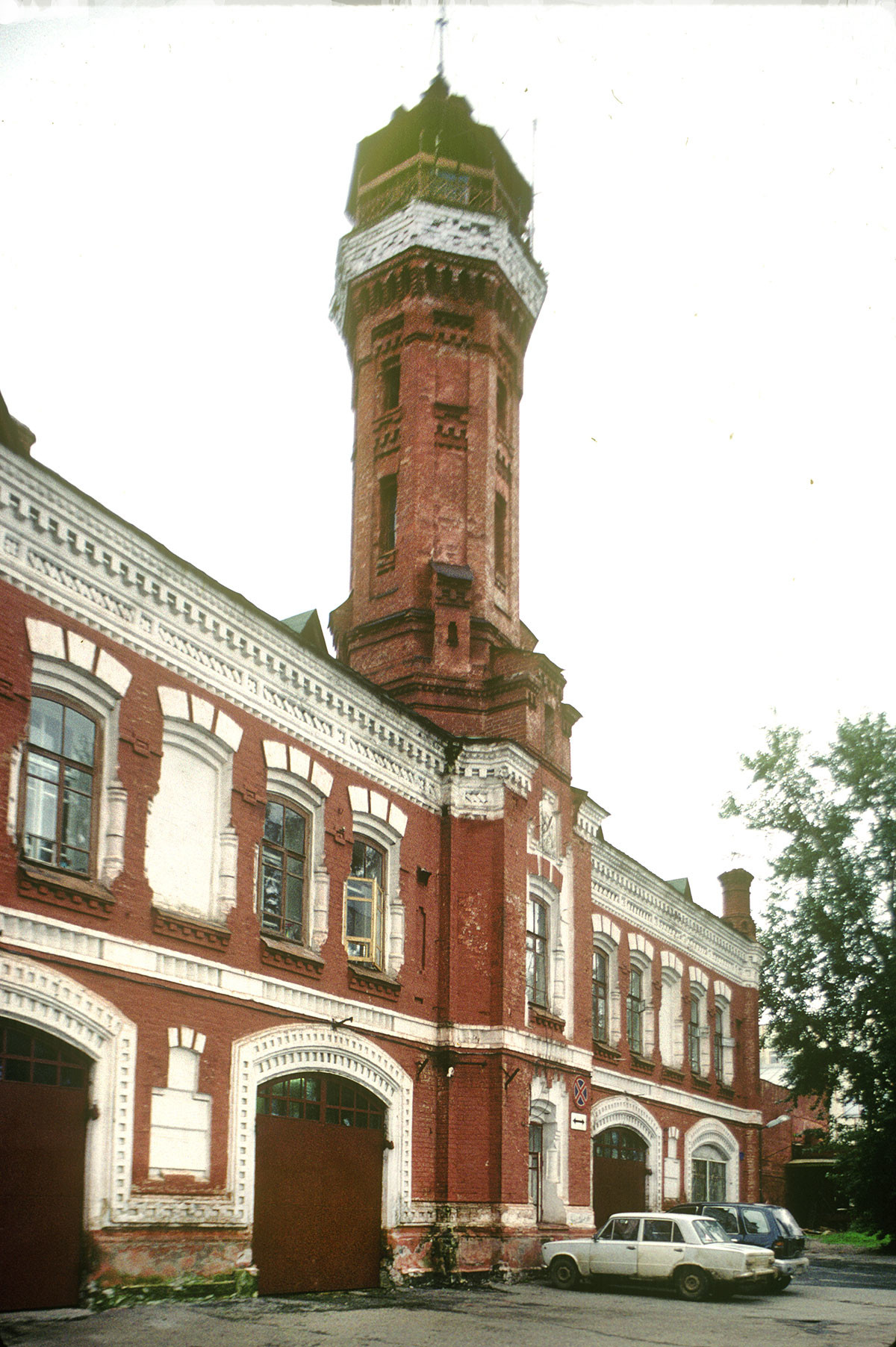 In the center of Prokudin-Gorsky’s photograph is a boulevard whose segments were called Great Nobility Street and Peter-Paul Street, the latter named after the Cathedral of Sts. Peter and Paul, a sliver of whose bell tower is at the photograph’s right edge. Built in 1757-64, it is the oldest surviving brick church in Perm. I have included my black-and-white photograph of the cathedral. (Its bell tower, destroyed in the Soviet period, has not yet been rebuilt.) Renamed Communist Street during the Soviet period, the entire boulevard is now called Peter-Paul Street. 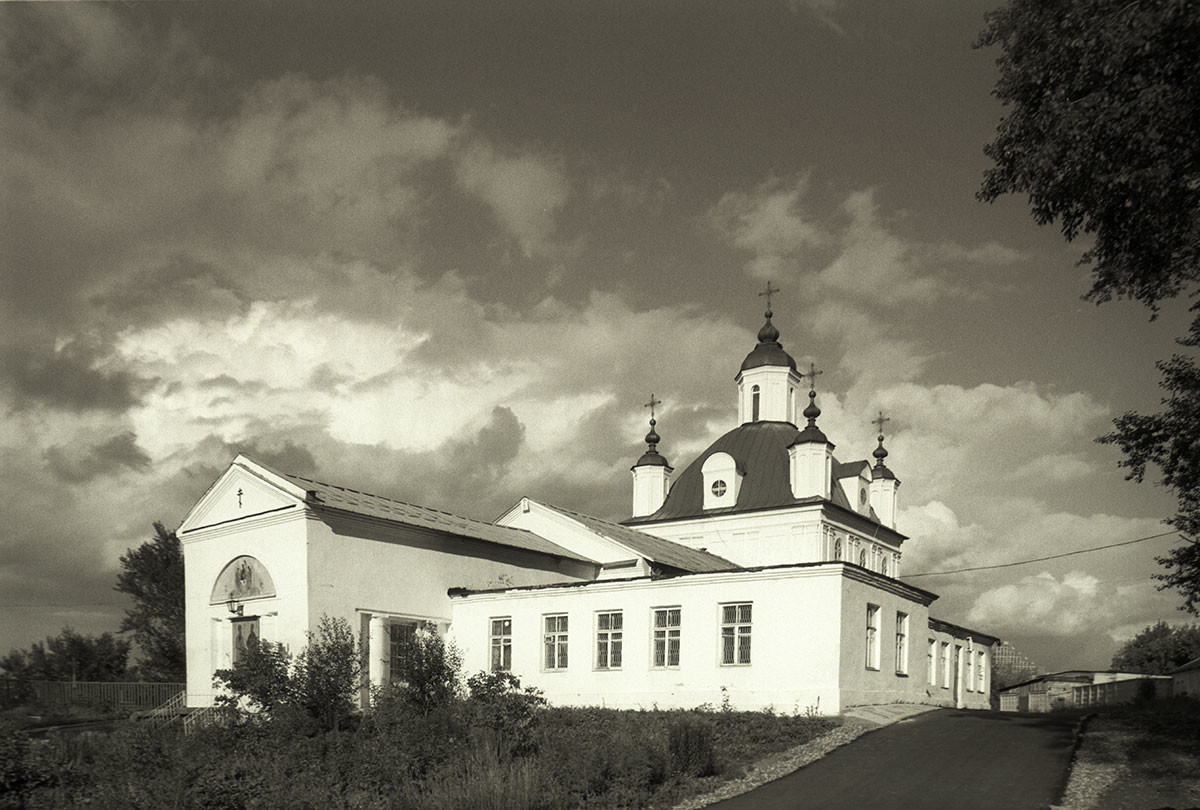 On the left of Prokudin-Gorsky’s panorama is Intercession (now Lenin) Street. In the distance is the bell tower steeple and dome of the Church of the Nativity of the Virgin (Lenin Street 48), built with merchant donations over a long period from 1787 to 1816. 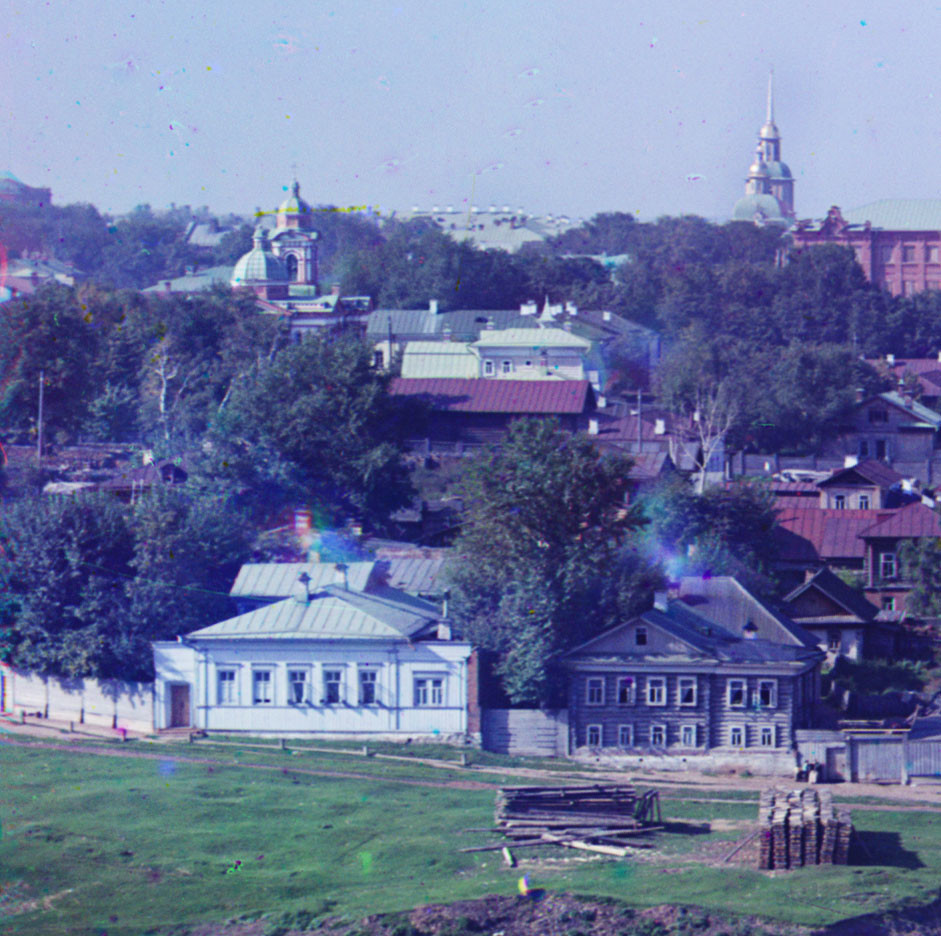 This second brick church in Perm was closed in 1928, its bell tower and cupolas were demolished and the structure was converted into a student dormitory. My photograph from 2014 shows the restored church without the bell tower, which was rebuilt at the end of the year. 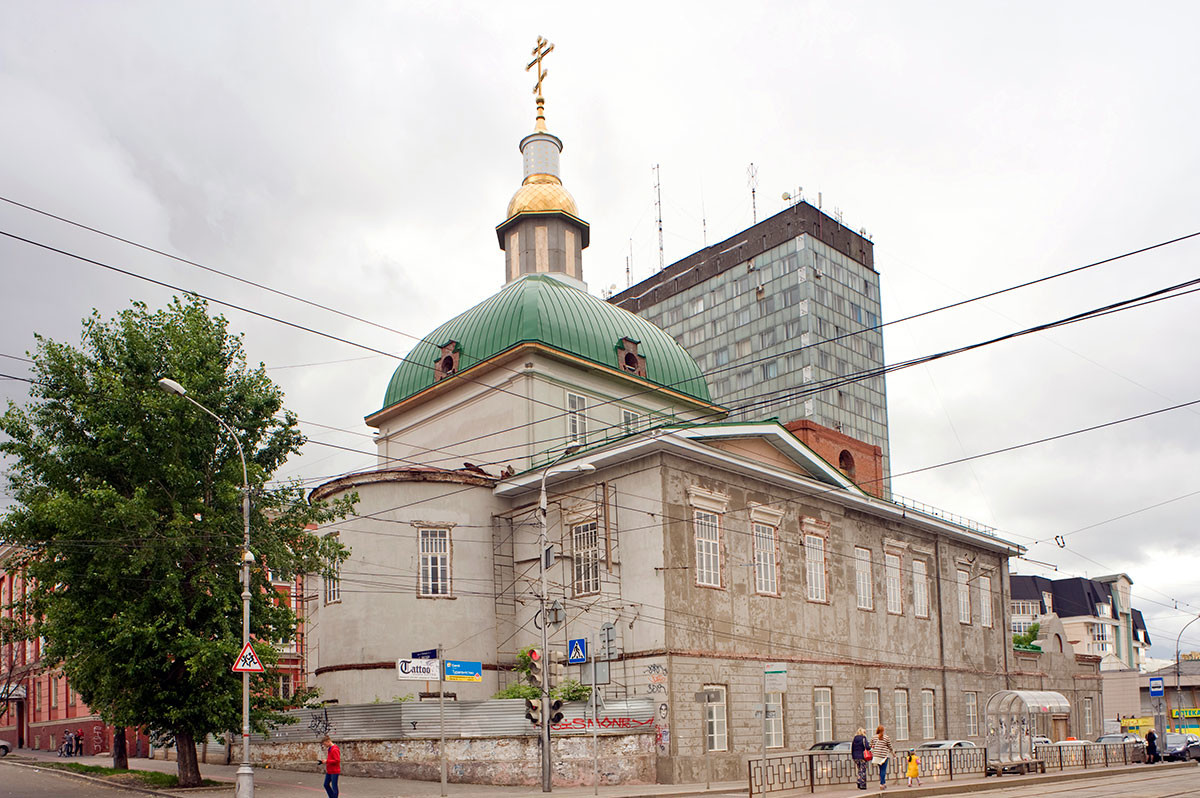 Church of Nativity of the Virgin (Lenin Street 48), northeast view. Its bell tower, demolished during Soviet period, had not yet been rebuilt at time of this view. It has now been rebuilt. June 2014

On the far left, two small green domes indicate the Church of St. Mary Magdalene (Lenin Street 11), built in a neoclassical style in 1889-92 as part of a large orphanage. Prokudin-Gorsky’s took two close views that are especially valuable in view of the structure’s subsequent history. In the 1930s the cupola and bell tower were demolished, and a third story was added — as seen in my 1999 photograph. The building now serves as the Institute of Ecology and Genetics. 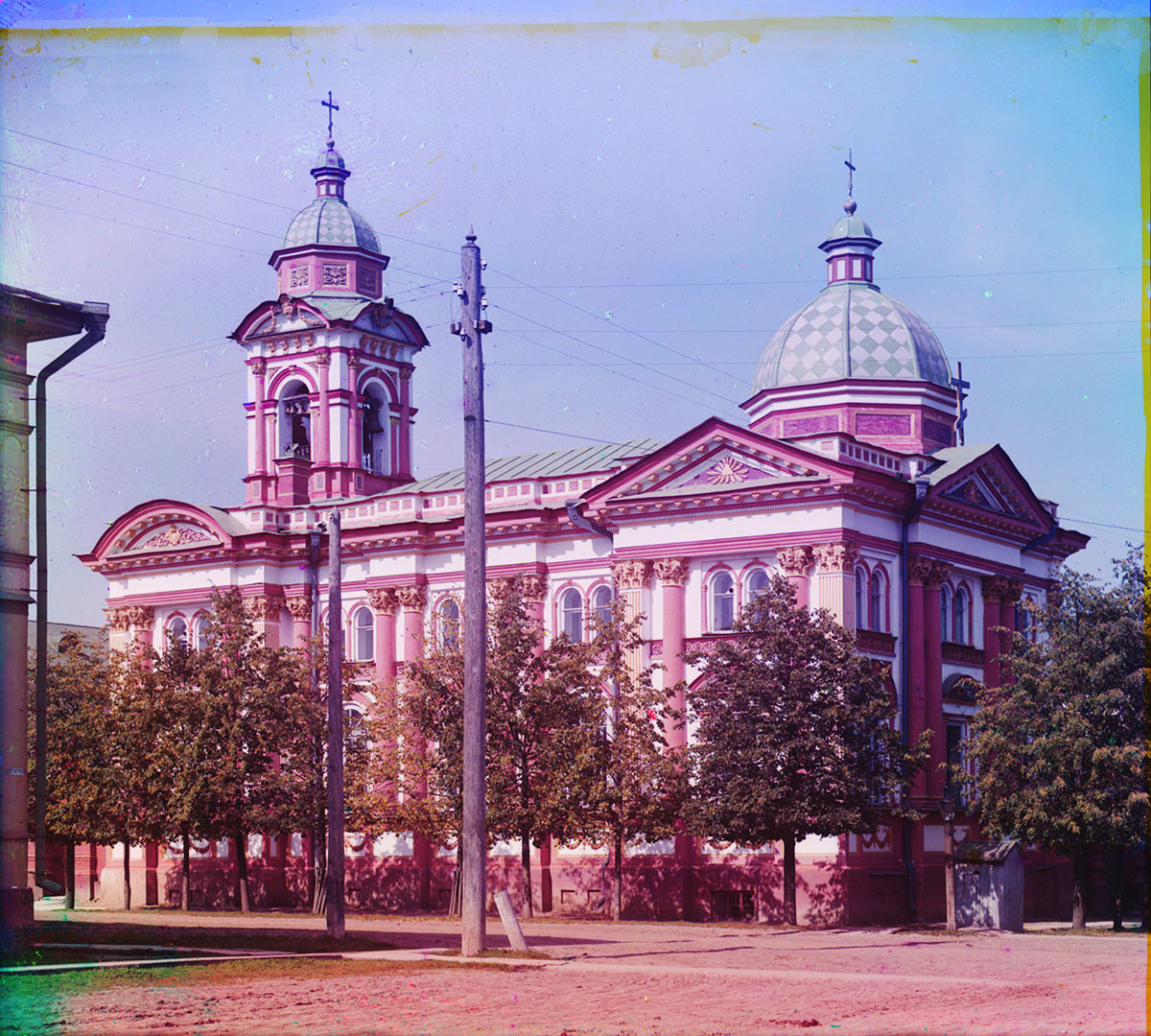 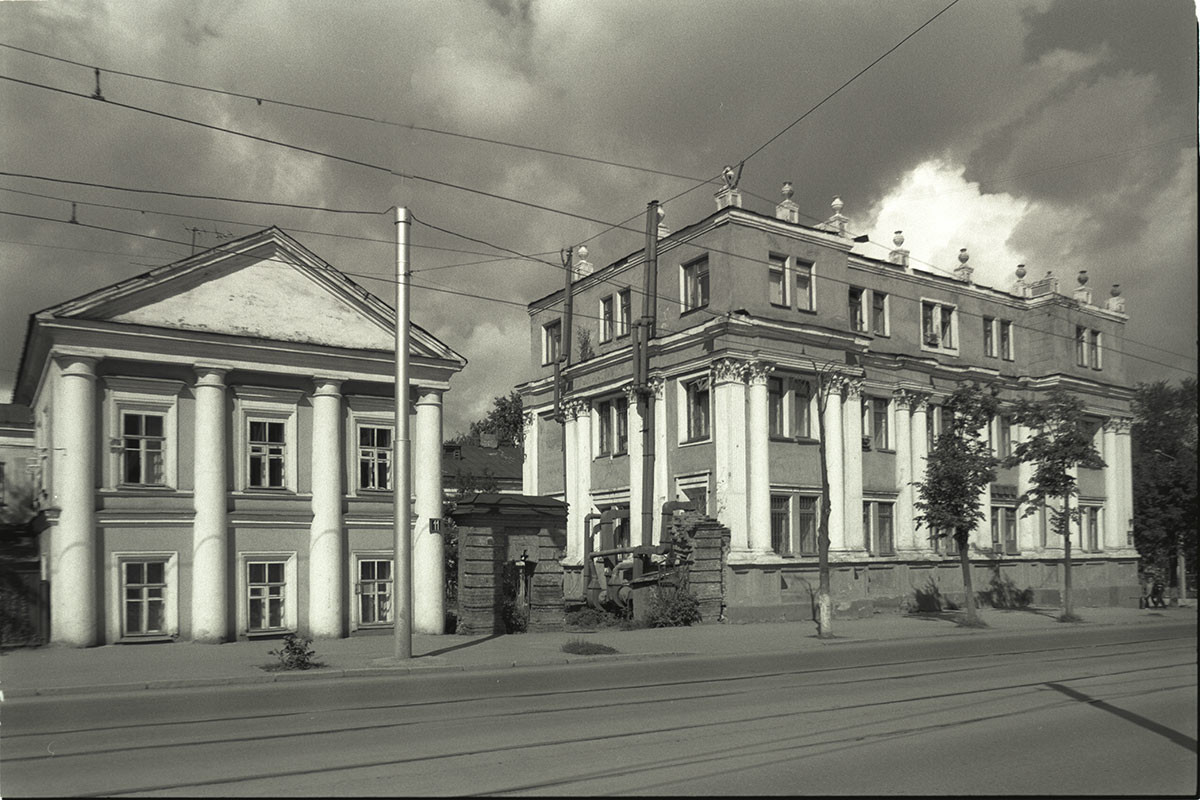 Revelations of past splendor

A bit farther down the same block is the splendid Gribushin mansion, hidden by the trees in Prokudin-Gorsky’s photograph. Originally built in 1895-97, the house was rebuilt in 1905 in a lavish baroque manner for the merchant Sergey Gribushin. Referred to in Boris Pasternak's novel Doctor Zhivago as the "house with statues" (in the town of “Yuriatin”), the mansion serves as the headquarters of the Urals Division of the Russian Academy of Sciences. 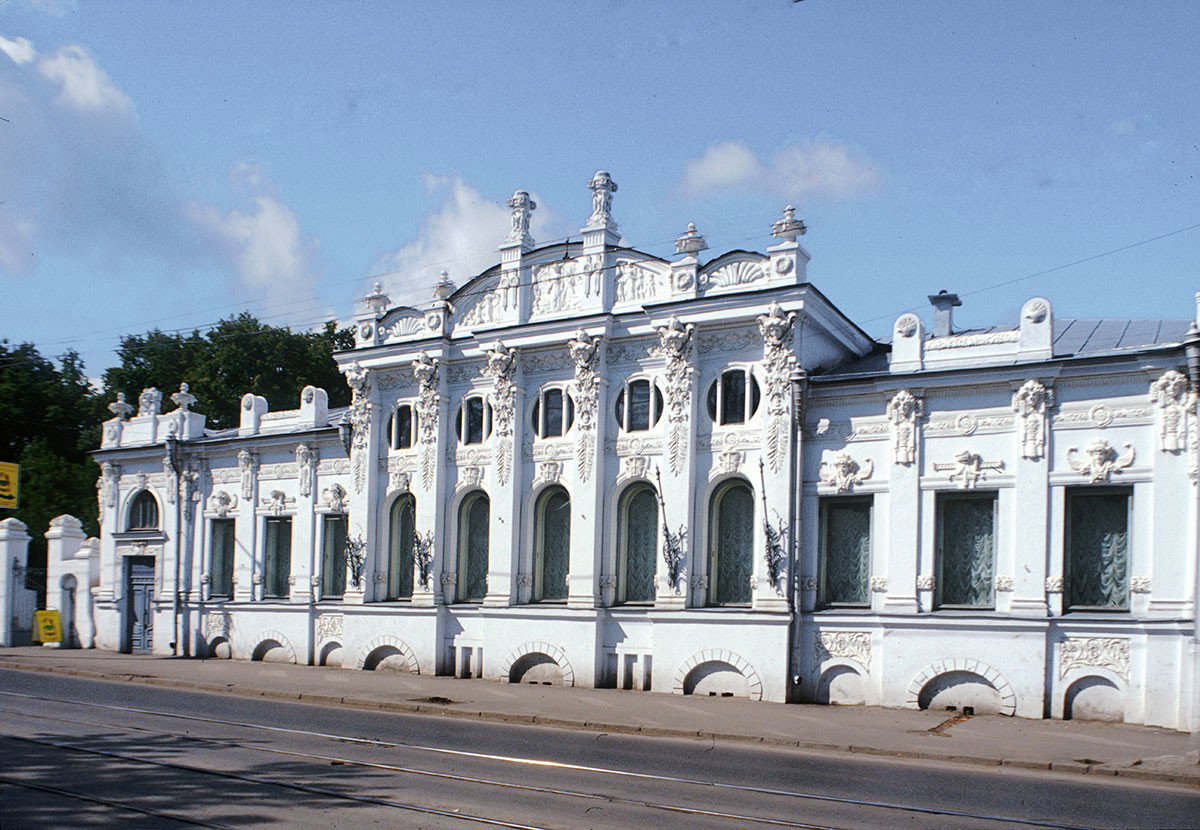 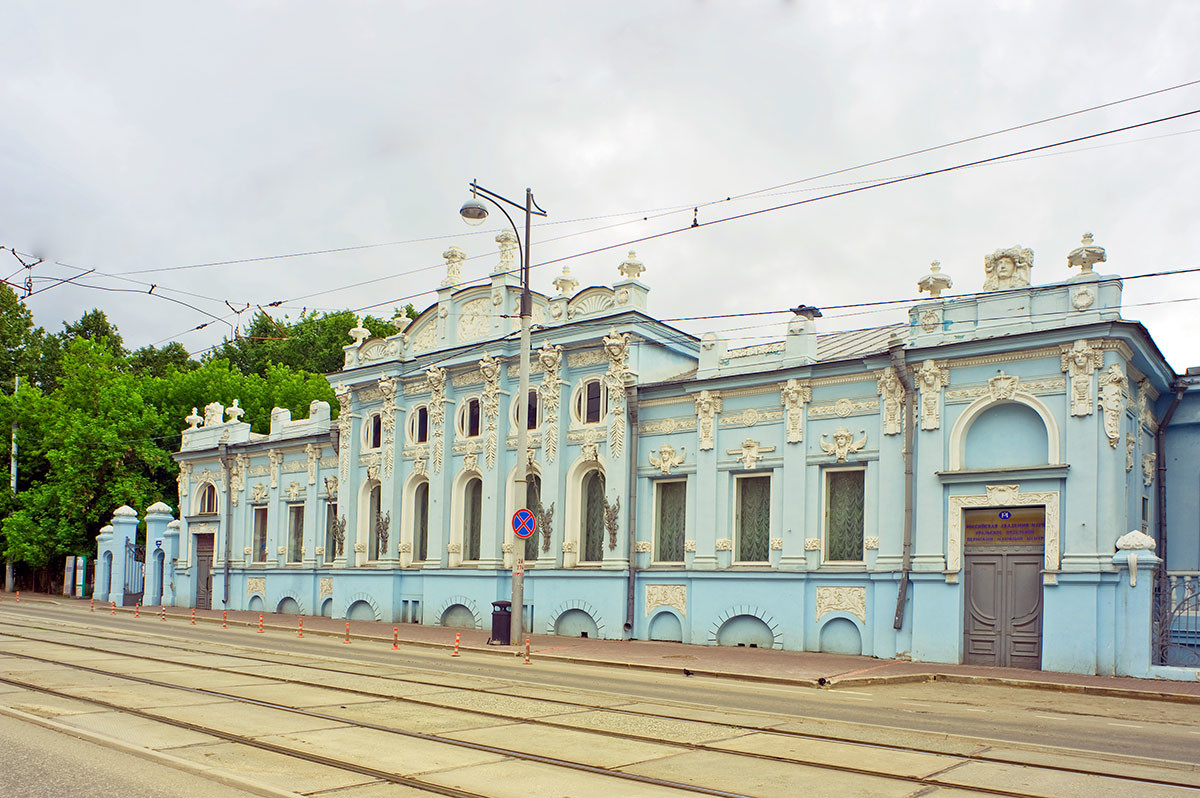 And if Prokudin-Gorsky and his assistants had maneuvered his bulky camera just three more blocks, to the intersection of Siberia and Ascension (now Lunacharsky) Streets, they would have photographed two more cultural monuments. On one side is the elegant neoclassical building of the Nobility Assembly, built by Ivan Sviyazev in 1832-37. 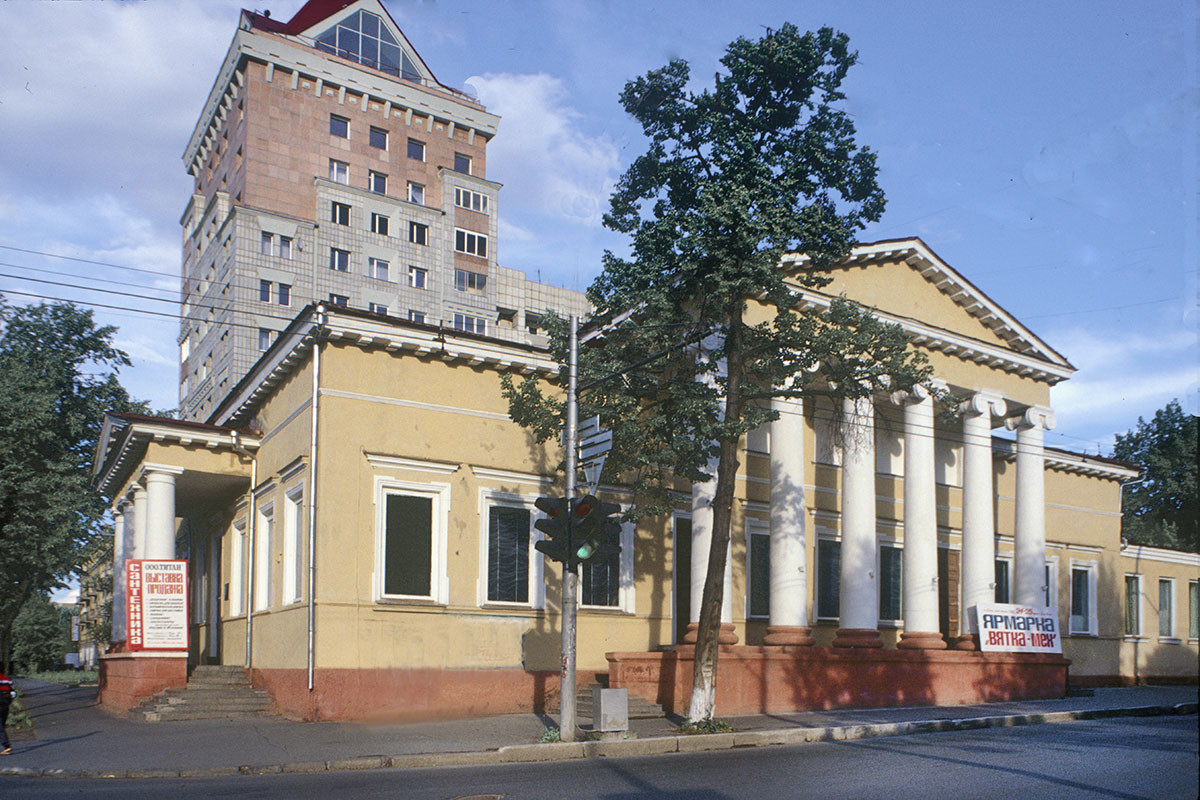 On the other side of Siberia Street is the house built in 1852 and acquired in 1862 by Pavel Diaghilev, grandfather of the renowned impresario Serge Diaghilev, who spent much of his childhood there. 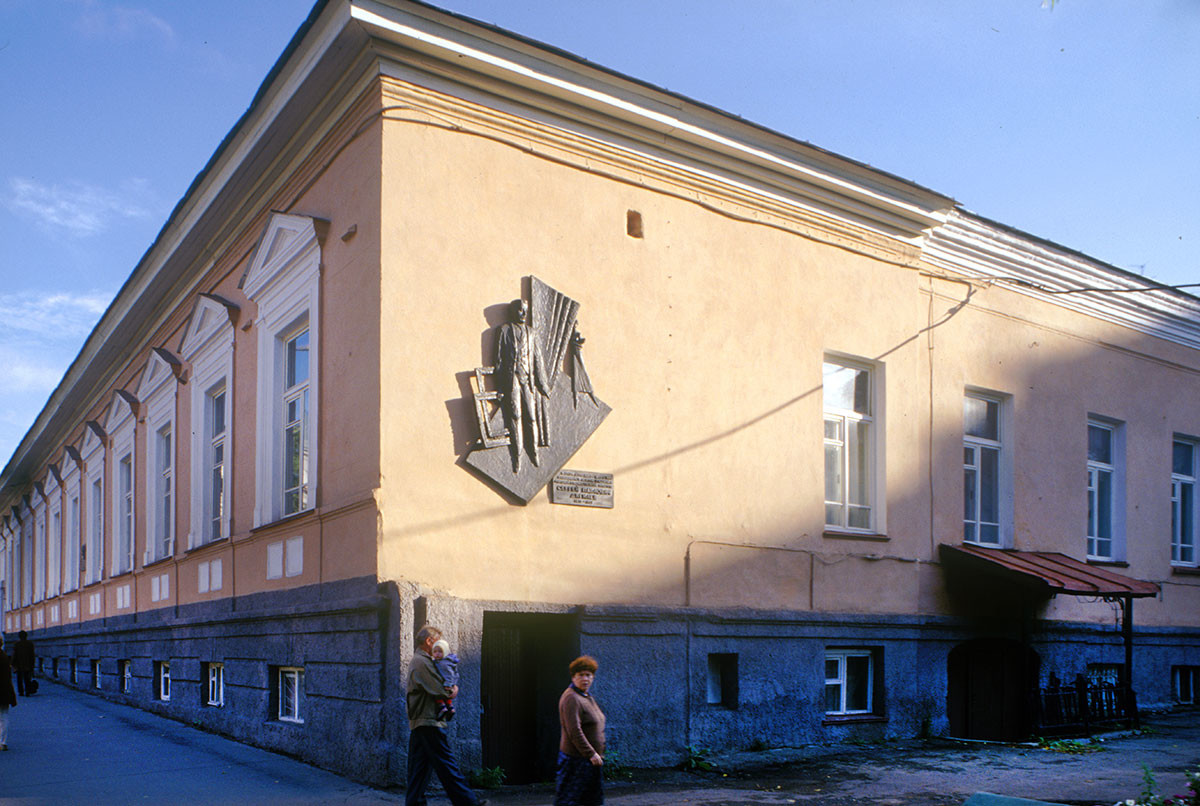 Prokudin-Gorsky’s photographs of pre-revolutionary Perm convey an invaluable sense of a provincial Russian city, with its mixture of traditional architecture and rapid industrial expansion. These richly detailed views of the city’s neighborhoods have become a unique record of a historic milieu that fades with each passing year.