Perm: Lord of the Northern Urals 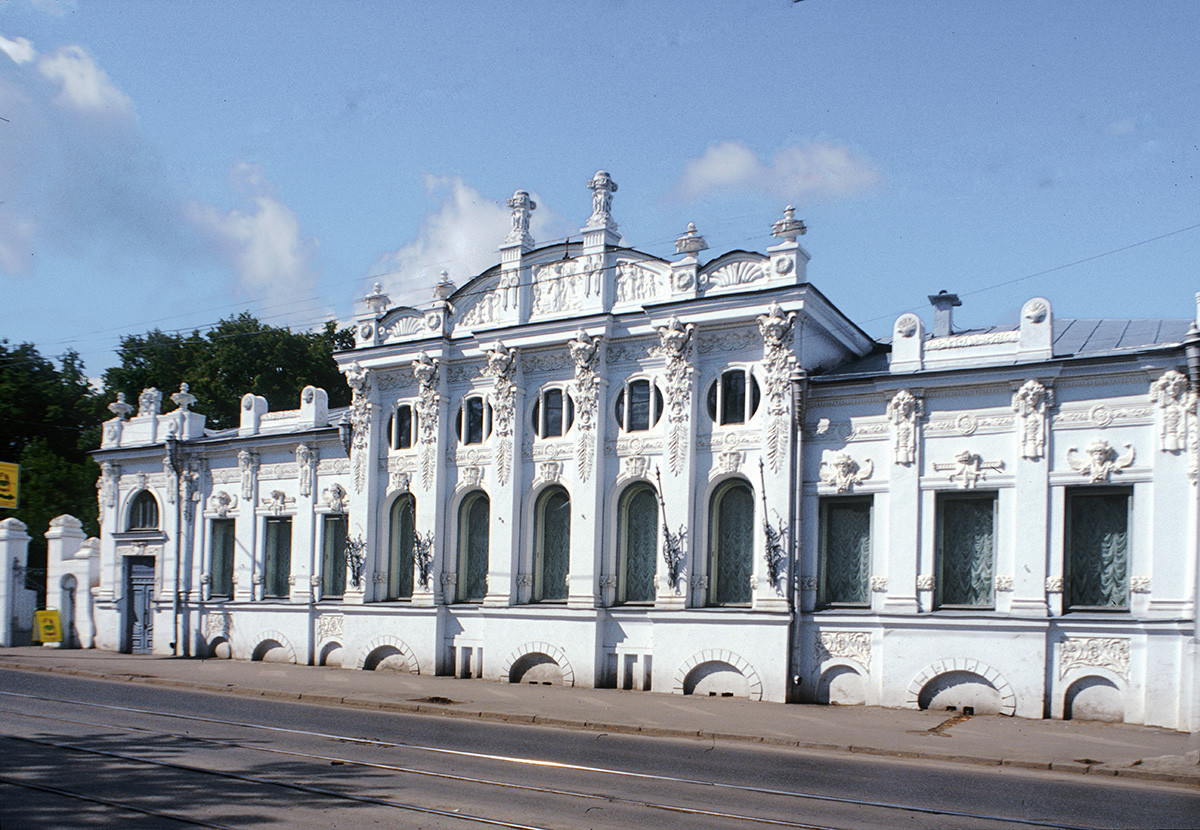 Perm. Sergei Gribushin House. Built at turn of 20th century by Alexander Turchasov. Referred to in Boris Pasternak's Doctor Zhivago as the "house with statues". August 23, 1999

Located just on the European side of the Ural Mountains, the metropolis of Perm is both an industrial powerhouse and one of Russia’s cultural centers. The main part of the city extends for miles along the high east bank of the Kama River.

In summer 1909, the Russian photographer and chemist Sergei Prokudin-Gorsky made his first trip to Perm as part of his project to document the diversity of the Russian Empire in the early 20th century. Prokudin-Gorsky’s panoramas of Perm included detailed vistas of the riverfront. My first visit to the Perm region occurred nine decades late, in the summer of 1999. Return trips ln 2014 and 2017 revealed a city in the midst of a building boom. 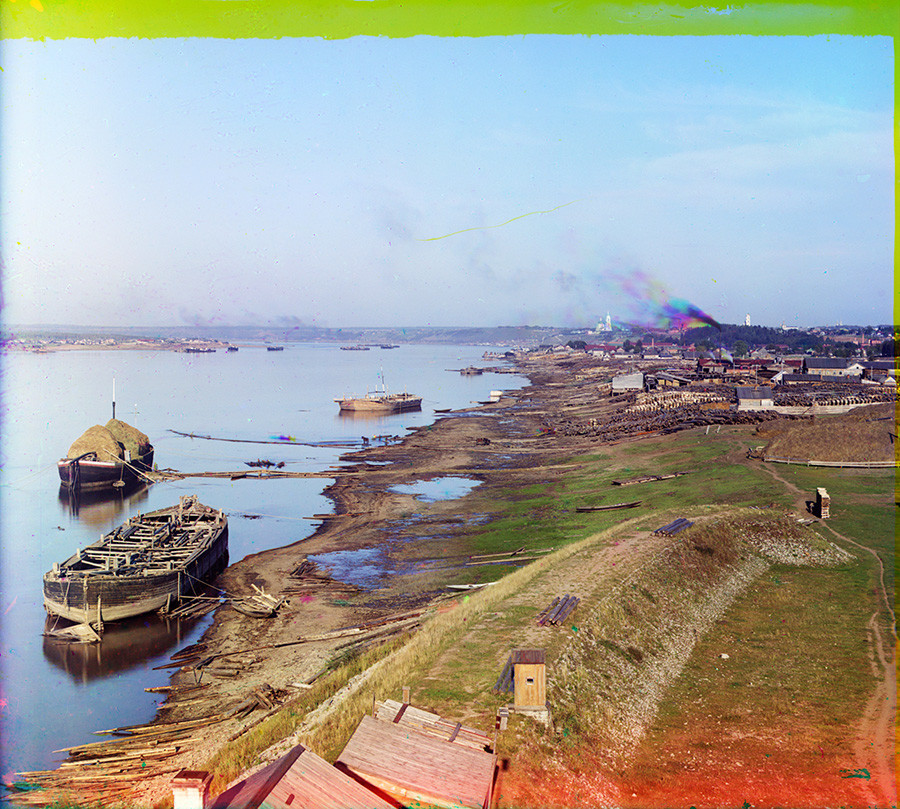 View up left bank of Kama River (taken from railroad bridge). Beneath the smoke plume: bell tower & Cathedral of the Transfiguration. Smoke is multicolored because of motion during the three sequential exposures of the negative. Summer 1909

A history entertwined with industry

The name “Perm” (apparently derived from Finno-Ugric words pera ma, meaning "distant land") is documented as early as the 12th-century chronicle “Tale of Bygone Years”. At that time "Perm" was variously used to include territory in the northern Urals that was nominally controlled by the economic power of Novgorod, whose hunters and traders reaped the bounty of its valuable furs. 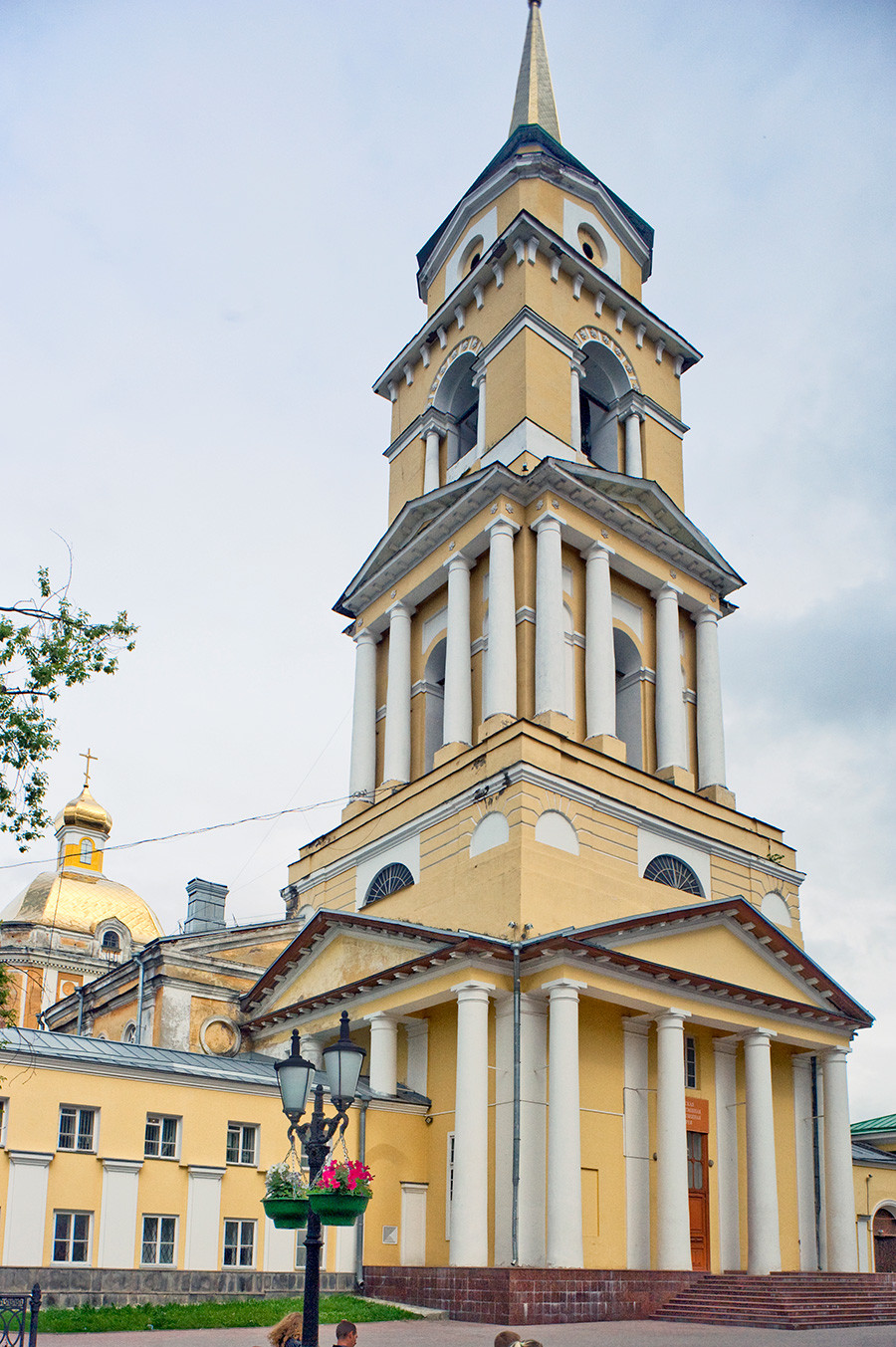 Bell tower of the Cathedral of the Transfiguration of the Savior. June 15, 2014

The settlement of Perm, however, originated in the early 18th century as part of the quest by Peter the Great to exploit the vast ore deposits of the Ural Mountains. These raw materials provided secure sources of essential industrial-grade metals needed above all for the army.

As with other Urals towns such as Yekaterinburg, the guiding force in developing this area was Vasily Tatishchev (1686-1750), one of Russia's early professional historians. A scholar with a gift for practical activity, Tatishchev had boundless admiration for Peter the Great and was an influential proponent of the central role of autocrat and state in Russian history, of the view that Russians are a "state people." 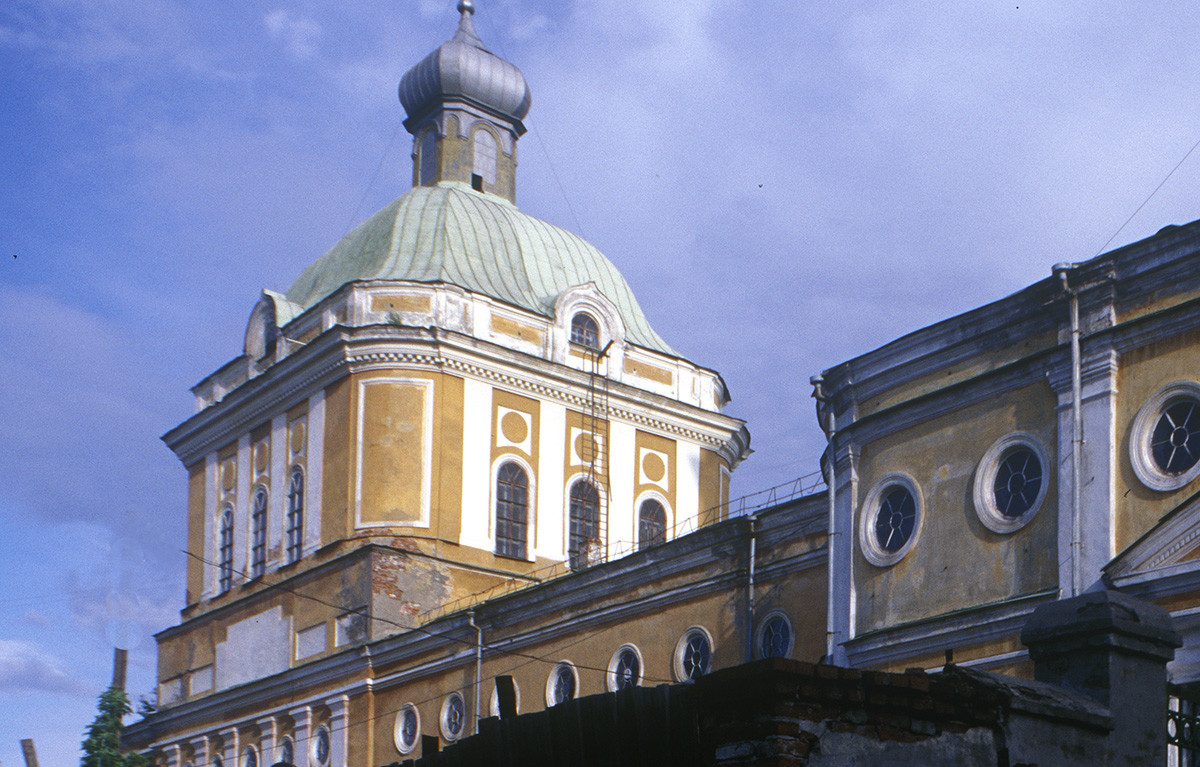 Cathedral of the Transfiguration of the Savior, northwest view. August 23, 1999

During the 1720s, Tatishchev established settlements at mines, smelters, and metal-working plants throughout the Ural Mountains. In 1720, he chose the 17th-century village of Egoshikha, located near the small Egoshikha River, a tributary of the Kama. With nearby sources of copper ore, dense forests and ample water supplies, the site was considered ideal for a large smelter. The project was entrusted to Georg Wilhelm Henning (de Gennin; 1676-1750), a military engineer of German origins who worked closely with Tatishchev.

Construction began on the main Egoshikha factory on May 4, 1723, which is considered the city’s founding date. The name “Perm” was officially adopted only in 1781 after a command by Catherine the Great that transformed the large factory settlement into an administrative center for the Urals. 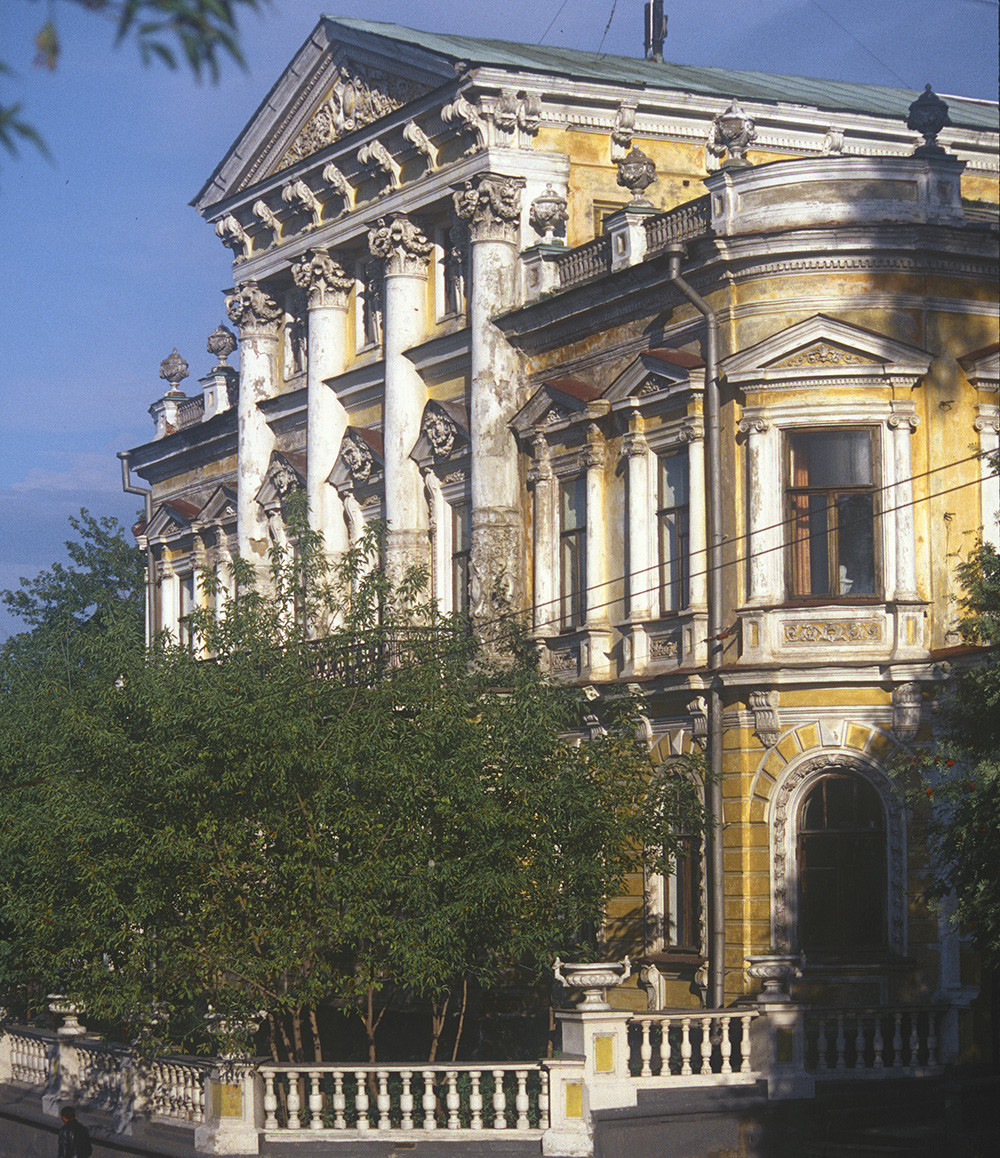 Since its origins, Perm has been associated with heavy industry, and by the 1860s it became one of the most important arms producing areas in Russia. The cannon works at Motovilikha — a factory town founded in the 18th century near the copper​ plant at Egoshikha — became a key component in the Russian military-industrial complex. 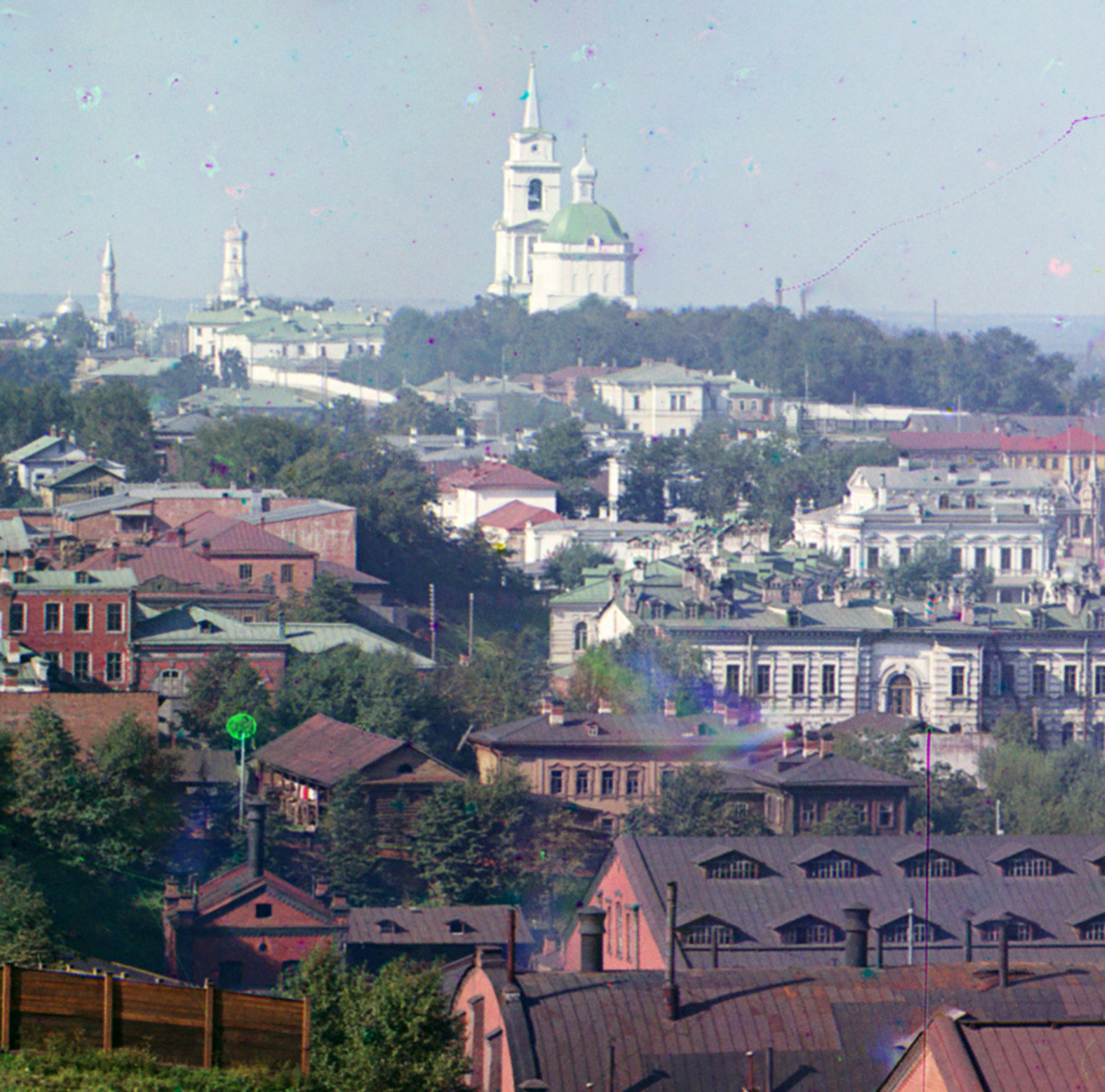 Because of its favorable location within the Volga River basin, Perm during the 19th century developed into a transportation center for salt and other minerals, ​as well as ​metal ore​ and the products of metal factories throughout the western Ural Mountains. In 1846, regular steamboat service appeared on the Kama.

In 1863, Perm was included in the main Siberian highway, and in 1878, construction was completed on the first phase of the Urals Railroad from Perm to Ekaterinburg, part of a railroad construction boom that culminated in the early 20th century with the completion of the TransSiberian Railway. Perm’s growth in the 19th century was reflected in Prokudin-Gorsky’s overviews of the central city, with its belching smokestacks. 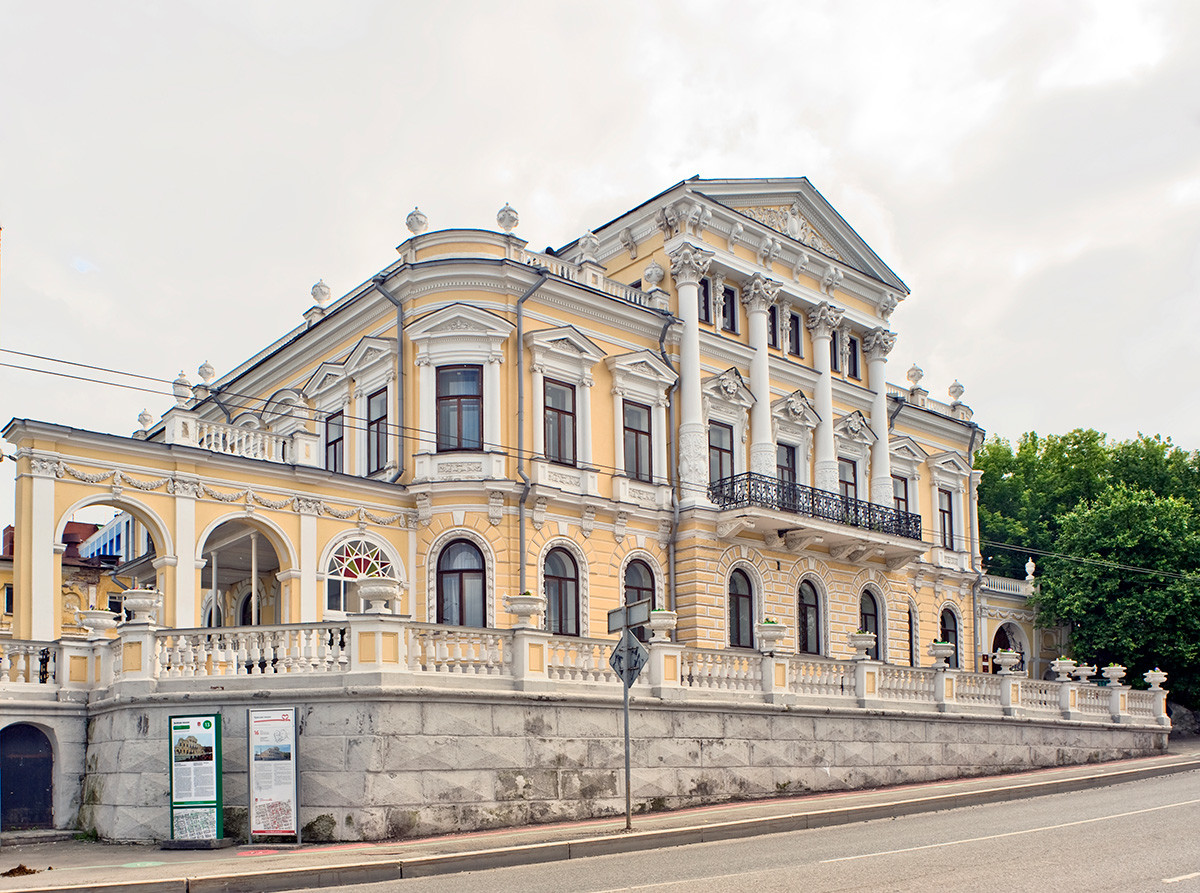 Among the landmarks in his photographs is the Cathedral of the Transfiguration of the Savior, overlooking the Kama. The shrine was originally part of the Transfiguration Monastery, founded in 1560 by the Stroganovs for their settlement up the Kama River at Pyskor. In 1781, the monastery moved to Perm, recently elevated to the status of town and the seat of a diocese. Begun at the end of the 18th century, construction of the Perm cathedral lasted until 1819. Thereafter, work began on ​its majestic neoclassical bell tower, designed by Ivan Sviyazev and finished in 1832. 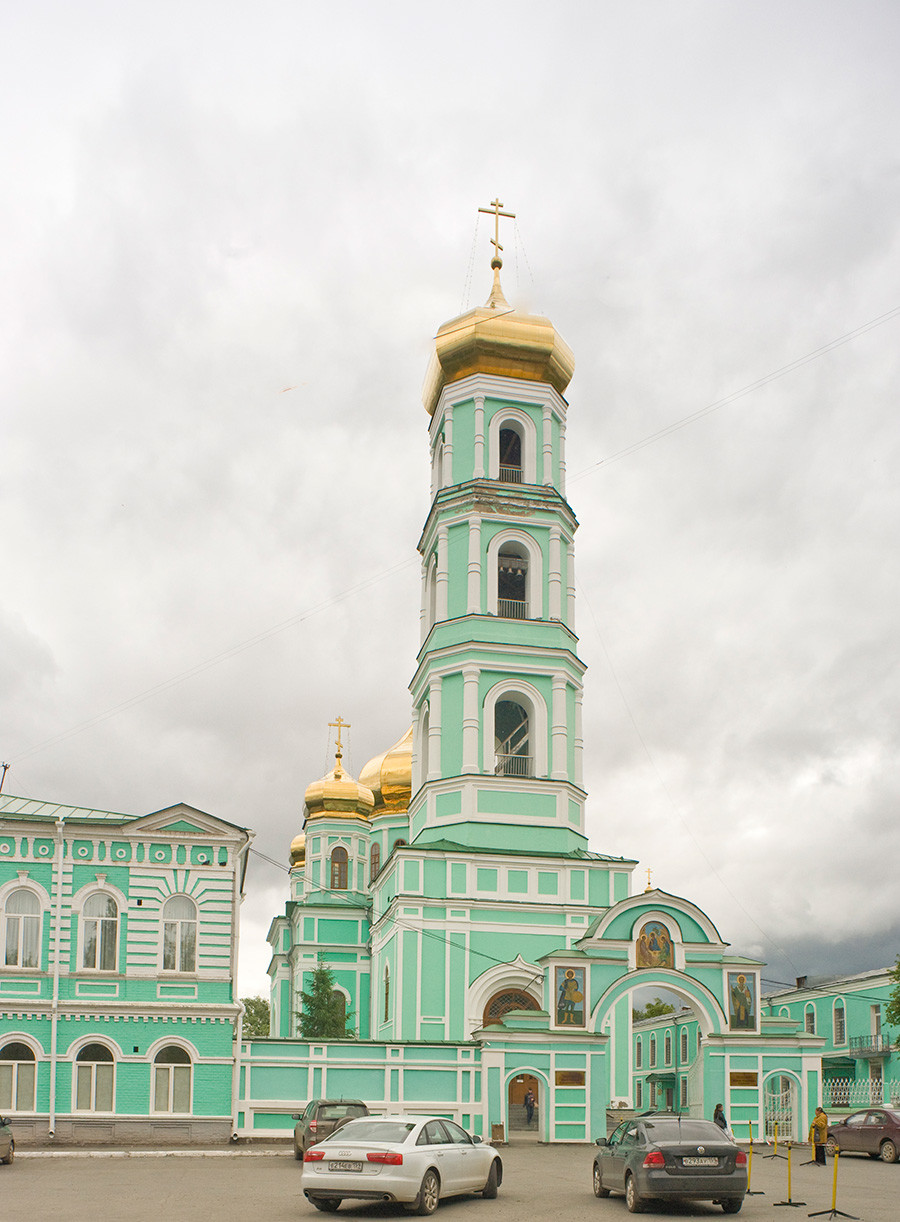 Much of Perm burned during a fire in 1842, but the town quickly recovered. During the half century before the First World War, rapid growth led to the construction of brick buildings in eclectic ornamental styles. 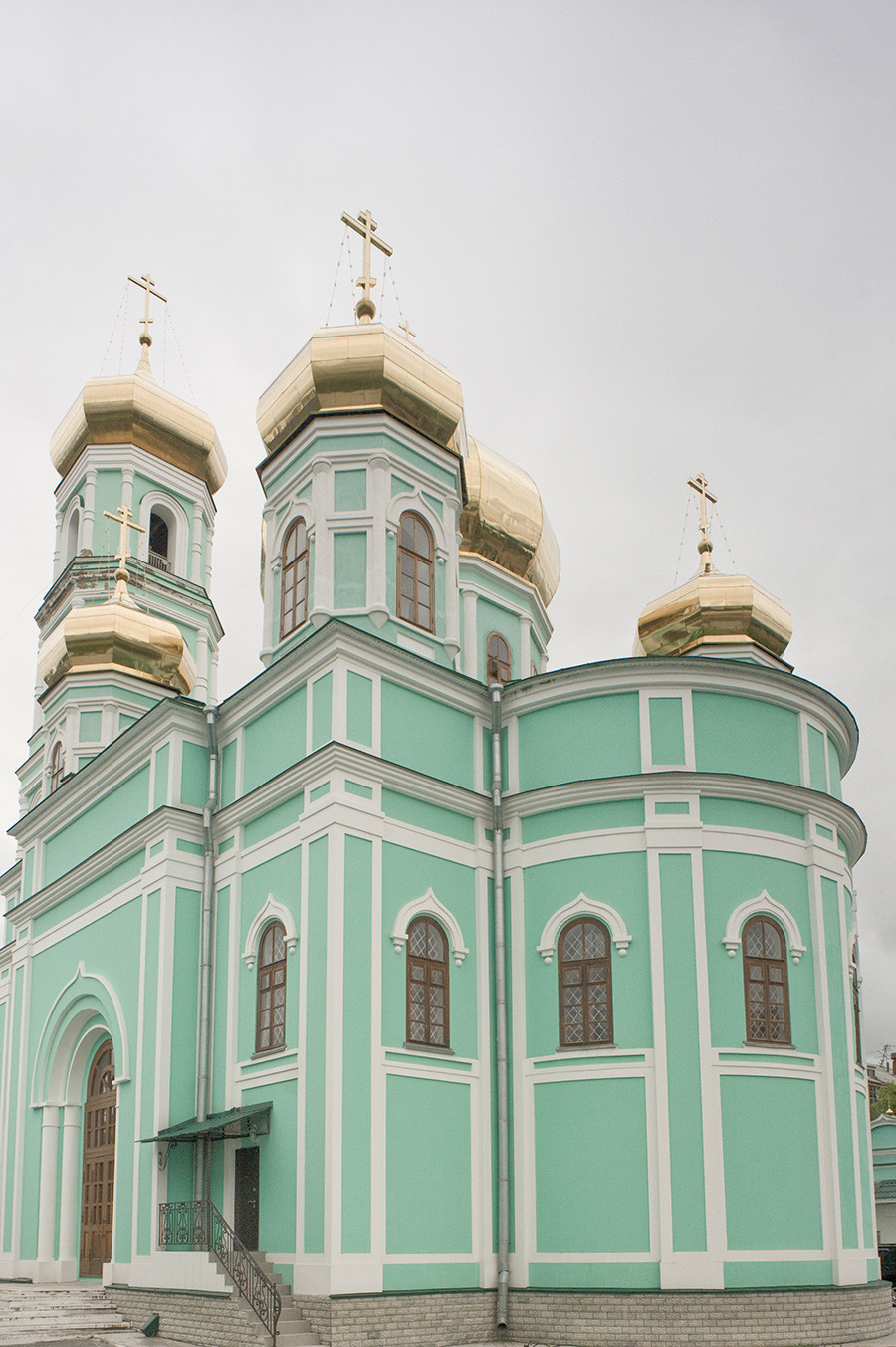 Despite sweeping changes in the century following Prokudin-Gorsky’s visit, many of the buildings captured in his photographs remain, Prominent among them are the Ascension-St. Feodosy Church (1903-10) and the Trinity Cathedral (1846-49). 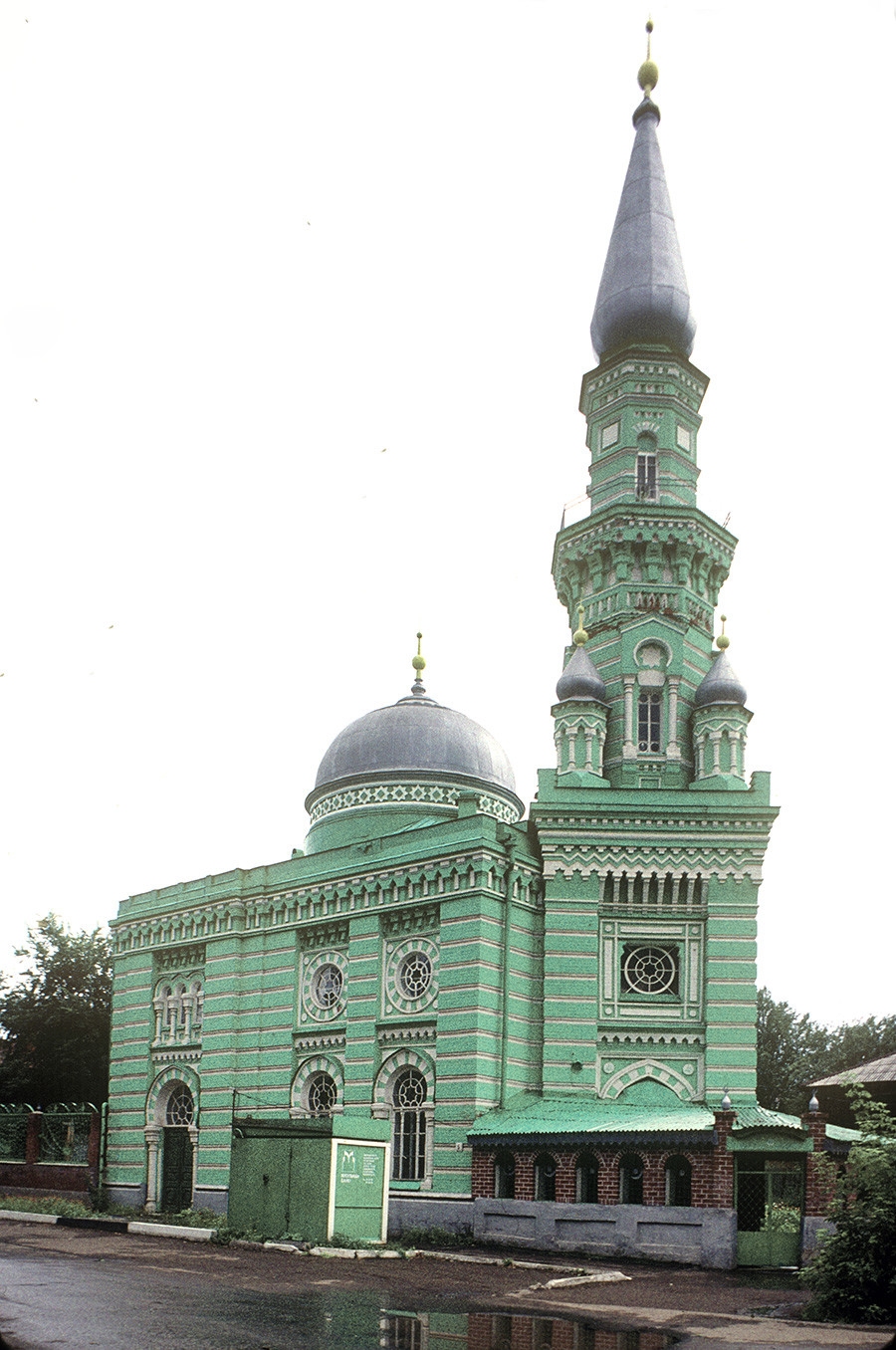 One of the most distinctive landmarks in his panoramas is the towering minaret of Perm’s main mosque, endowed by local merchants and designed in a Moorish style by Aleksandr Ozhegov. Completed in 1903, its tall minaret soars above wooden houses and century-old brick buildings in what was once a Tatar district. The area is now overshadowed by a skyscraper apartment complex and by the nearby office tower of energy giant Lukoil. 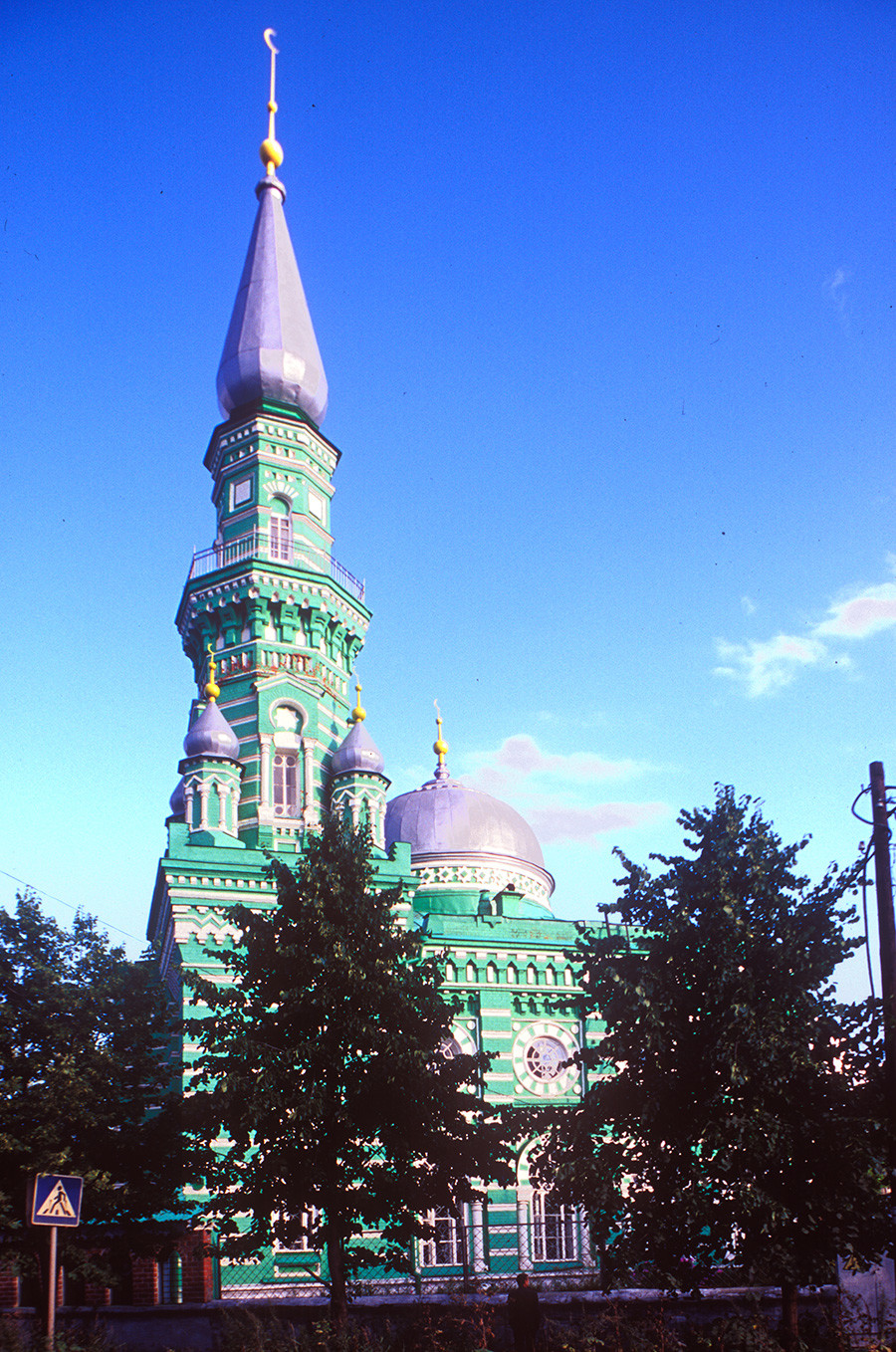 Like other industrial and railroad towns in the Urals, Perm was hotly contested during the Russian Civil War. For a few months, it appeared that Admiral Alexander Kolchak's White forces, which captured Perm on Christmas Eve in 1918, would prevail in their drive westward. Yet the energetic strategy of the Red commanders such as Mikhail Frunze and Vasily Bliukher drove Kolchak back from Perm and the Urals in what proved to be a disastrous retreat for White forces. In a further twist of fate, the victorious Red commander Bliukher fell victim to Stalin's purges in 1938. Perm during the Civil War is generally considered to be portrayed under the name “Yuriatin” in Boris Pasternak’s novel Doctor Zhivago. 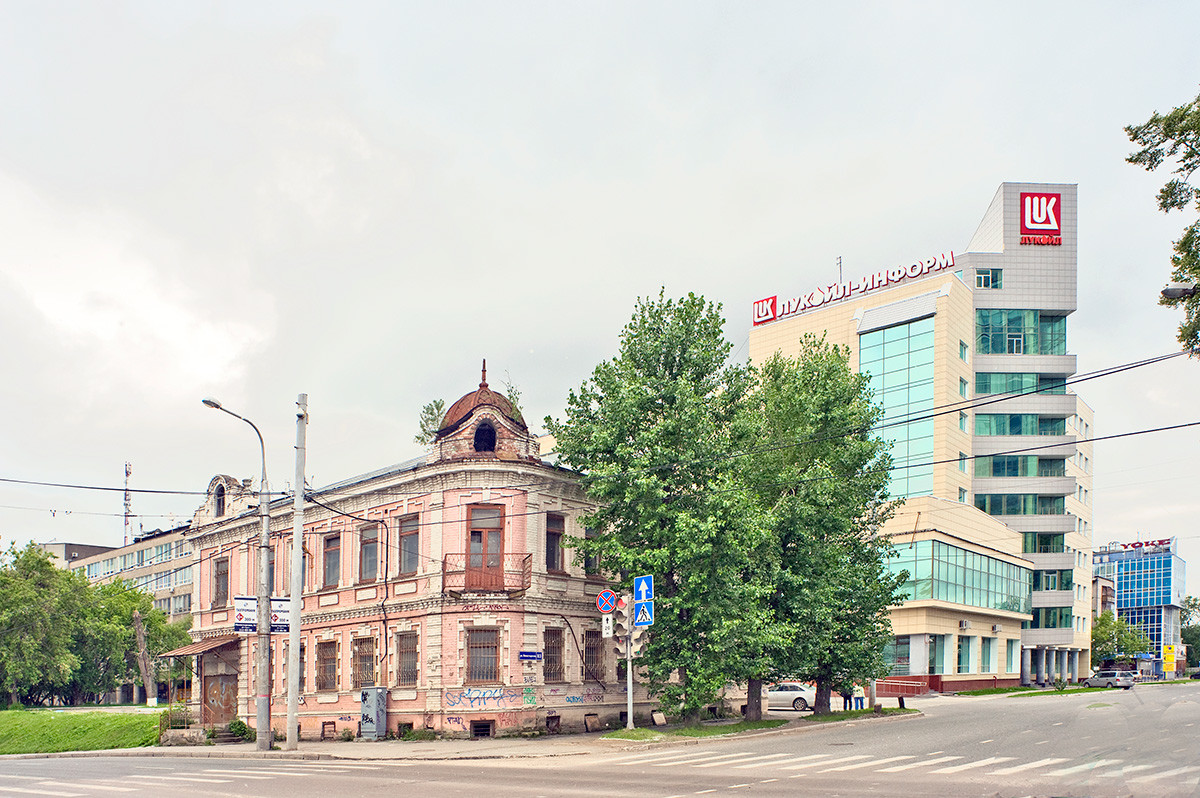 Despite extensive damage in the wake of the Civil War, Perm regained its industrial power in the 1930s. In March 1940 the city was renamed Molotov in honor of Vyacheslav Molotov (1890-1986), a member of Stalin’s inner circle. The name “Perm” was restored in October 1957 in the wake of Nikita Khrushchev’s campaign of de-Stalinization.

With slightly over a million inhabitants, Perm belongs to a cluster of cities (Krasnoyarsk, Voronezh, Ufa) that falls just under Russia’s top 10. The city's economy rests on the viability of local industry, which includes not only metal working and engine production but also major oil refineries and chemical plants.

Prokudin-Gorsky’s photographs of Perm superbly convey the sense of this bustling industrial and transportation nexus. 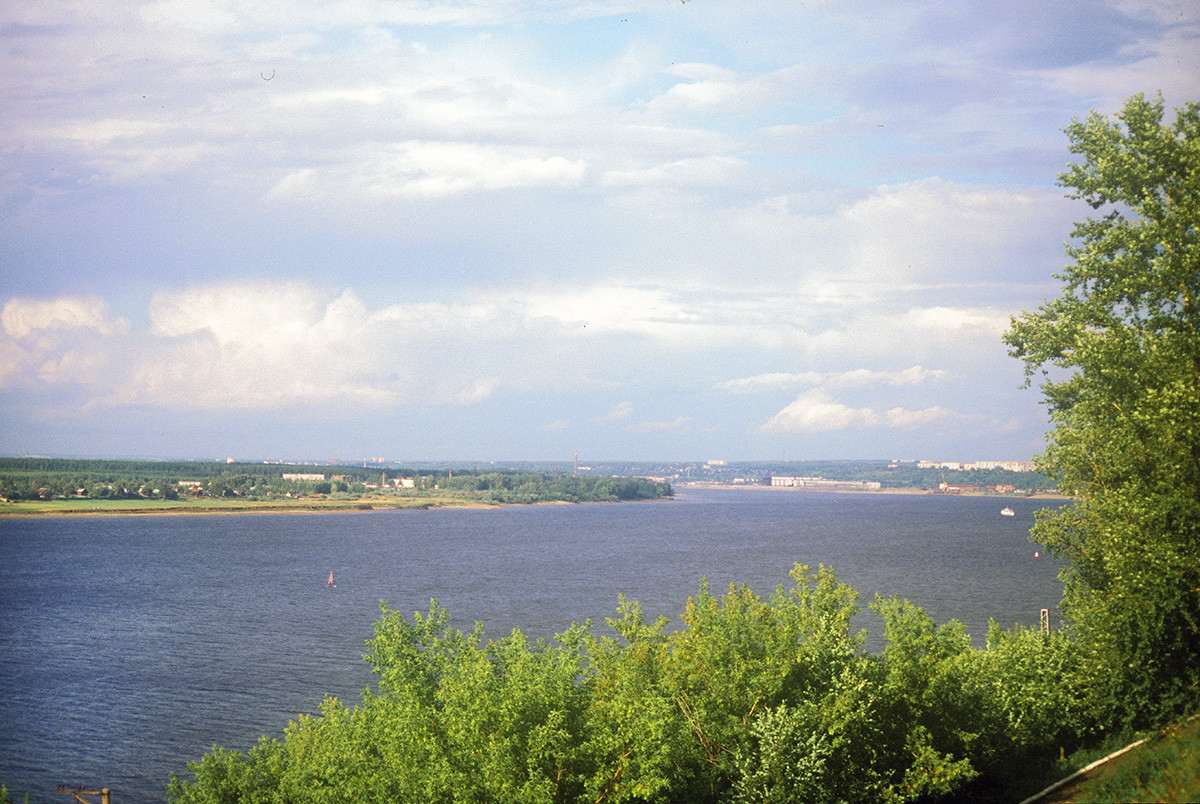