5 of Moscow's most BEAUTIFUL districts 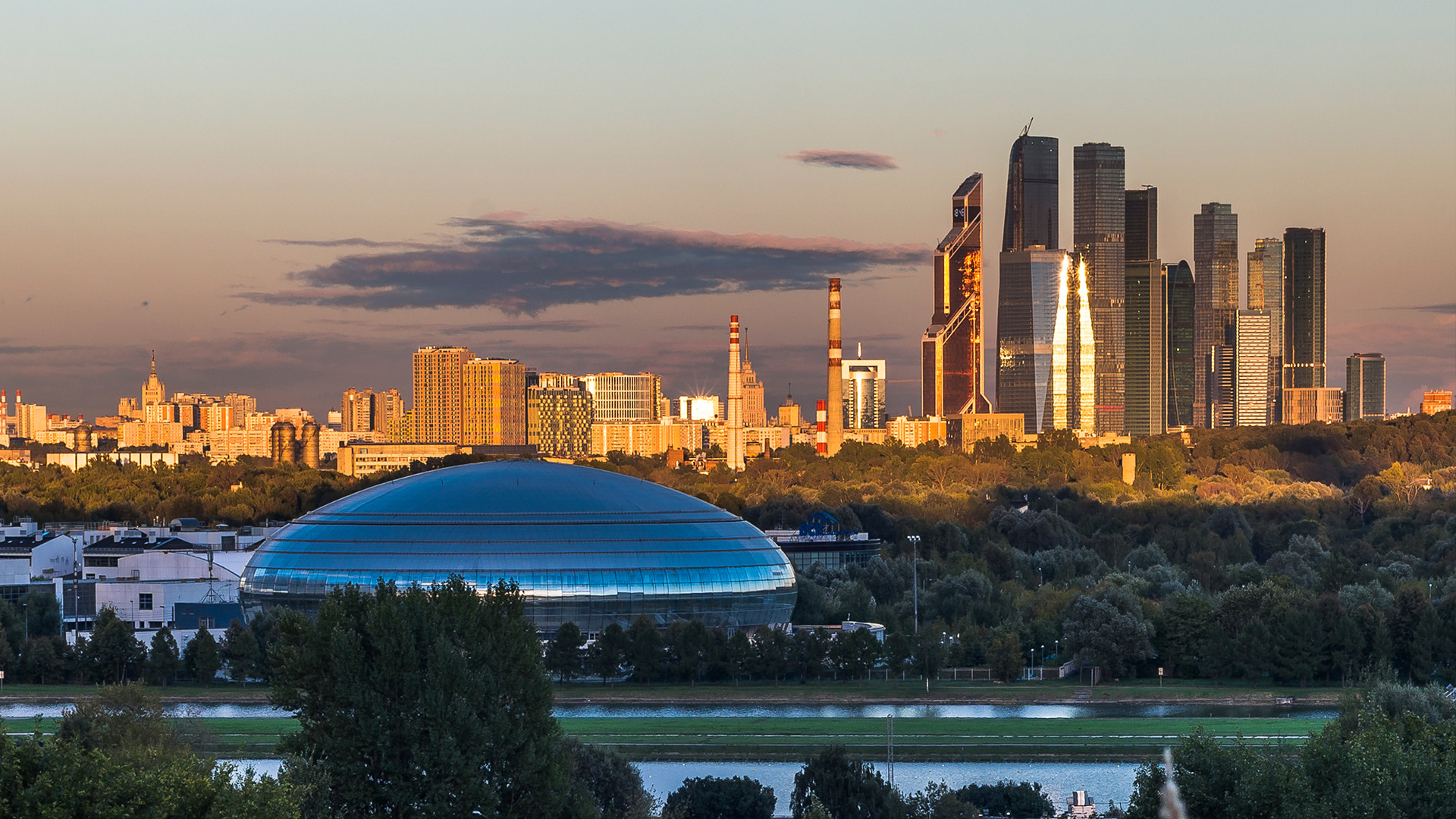 Legion Media
In this list, you will find the most beautiful panoramic views of Moscow, the first Soviet rock clubs and futuristic parks. Muscovites living on the city’s edge talk about their favorite places far from the city center and give insider tips on places that guidebooks don’t know about.

By 9 a.m., the main square of Sokolniki district in the northeast of Moscow begins to fill up with dog-walkers and cyclists. The mobile coffee shops and hot dog outlets are not open yet; the only sounds are the rustling of the autumn leaves and gurgling of the main fountain, around which sleepy guards walk.

“But on the weekend, there are crowds of people here, as if the whole of Moscow descends on it,” says Raisa Bazarova, a resident of Sokolniki. She says that she literally “married” Sokolniki 21 years ago, in 1999, when she moved from the central Arbat district to live with her new husband. 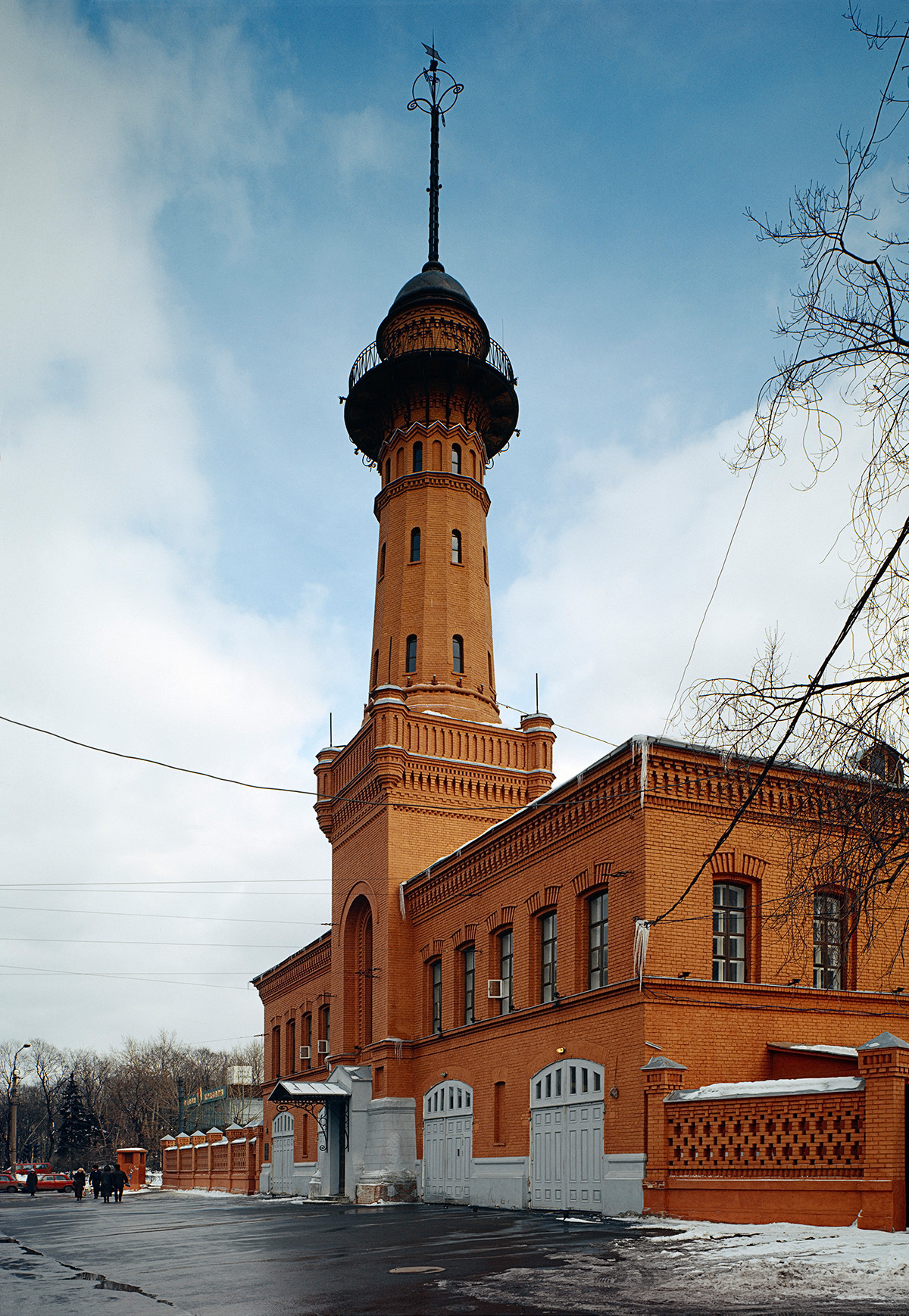 Police fire station with a tower-tower in Sokolniki

It took three years for her to feel at home, finally making friends with the neighbors. Now, Raisa considers it the most beautiful area of ​​Moscow and is fond of its low-rise skyline and architectural monuments.

“As soon as you step out of the subway, you’re in Sokolniki, and the first thing that catches the eye is the pre-revolutionary watchtower [built in 1884]. It saw the old wooden Moscow and has been preserved in all its splendor,” says Bazarova. 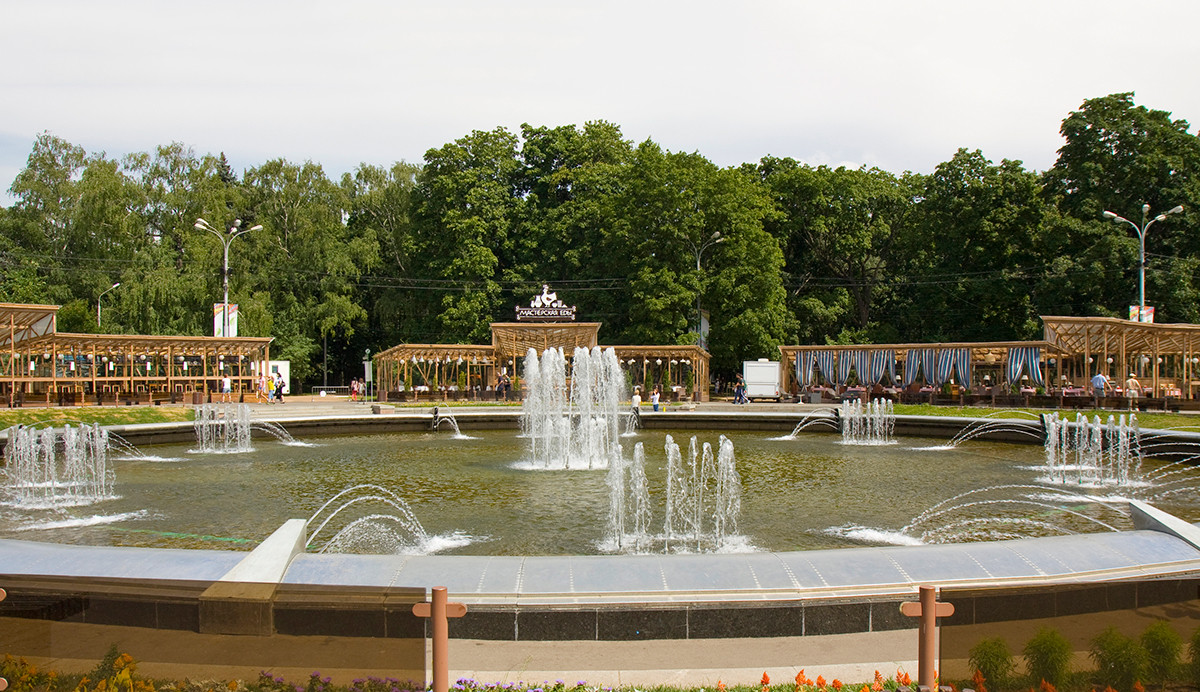 Raisa also advises foreigners to visit Sokolniki Park, one of the oldest in Moscow, founded in 1878, with fountains, ponds, a swimming pool, an amusement park and its own rose garden. Sokolniki was adored by Peter the Great and Alexander I and it was here that they often held feasts. For Bazarova, the lush greenery makes it the “lungs” of the district. 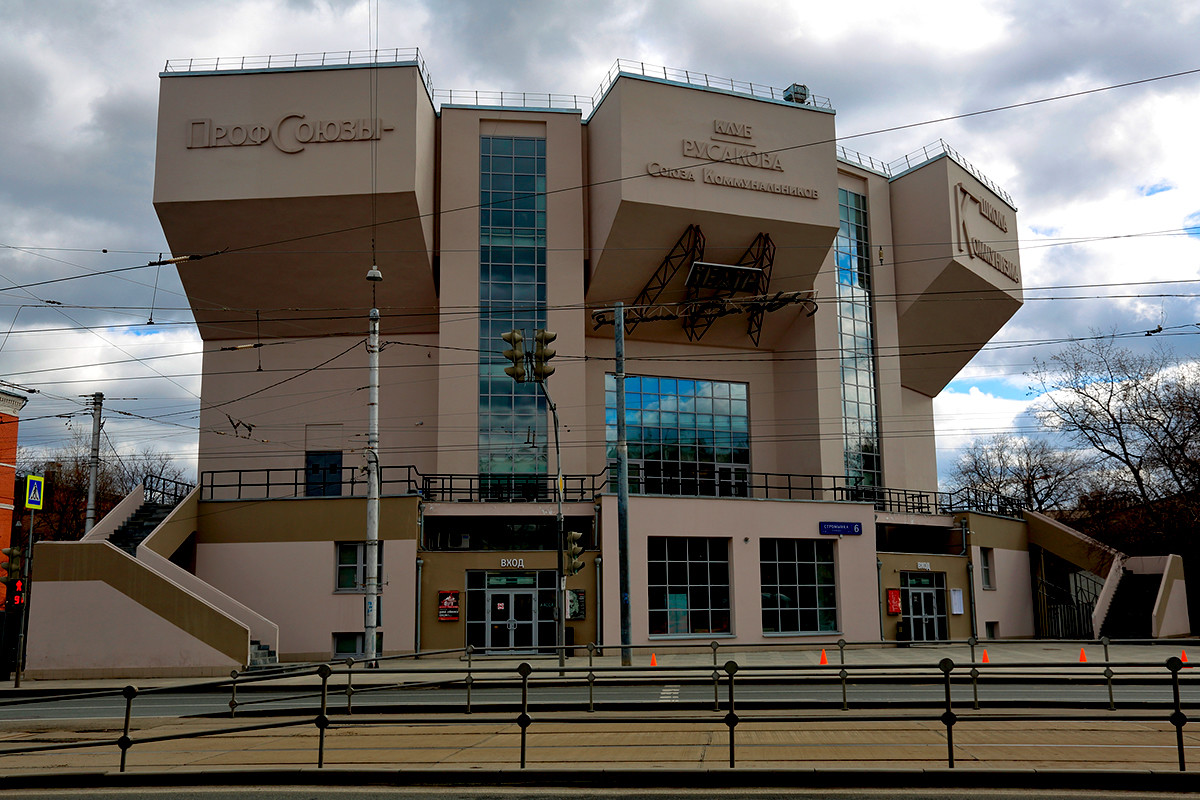 The Viktyuk Theater. The building of the outstanding architect Konstantin Melnikov, 1929

Another must-see, according to Bazarova, is the Roman Viktyuk Theater — if nothing else, then to see one of Moscow’s main architectural gems, designed and built in the Constructivist style that prevailed in the city in the 1920s. Moreover, Russian-speaking theater lovers might want to catch a performance of ‘The Maids’ by French playwright Jean Genet.

Galina Yakunina, director of a sports club in Moscow’s north for nine years, walks with unfeigned pleasure along the main alley of Rechnoy Vokzal (“River Station”) Park, which was restored in 2020 under the ‘My district’ city improvement program. 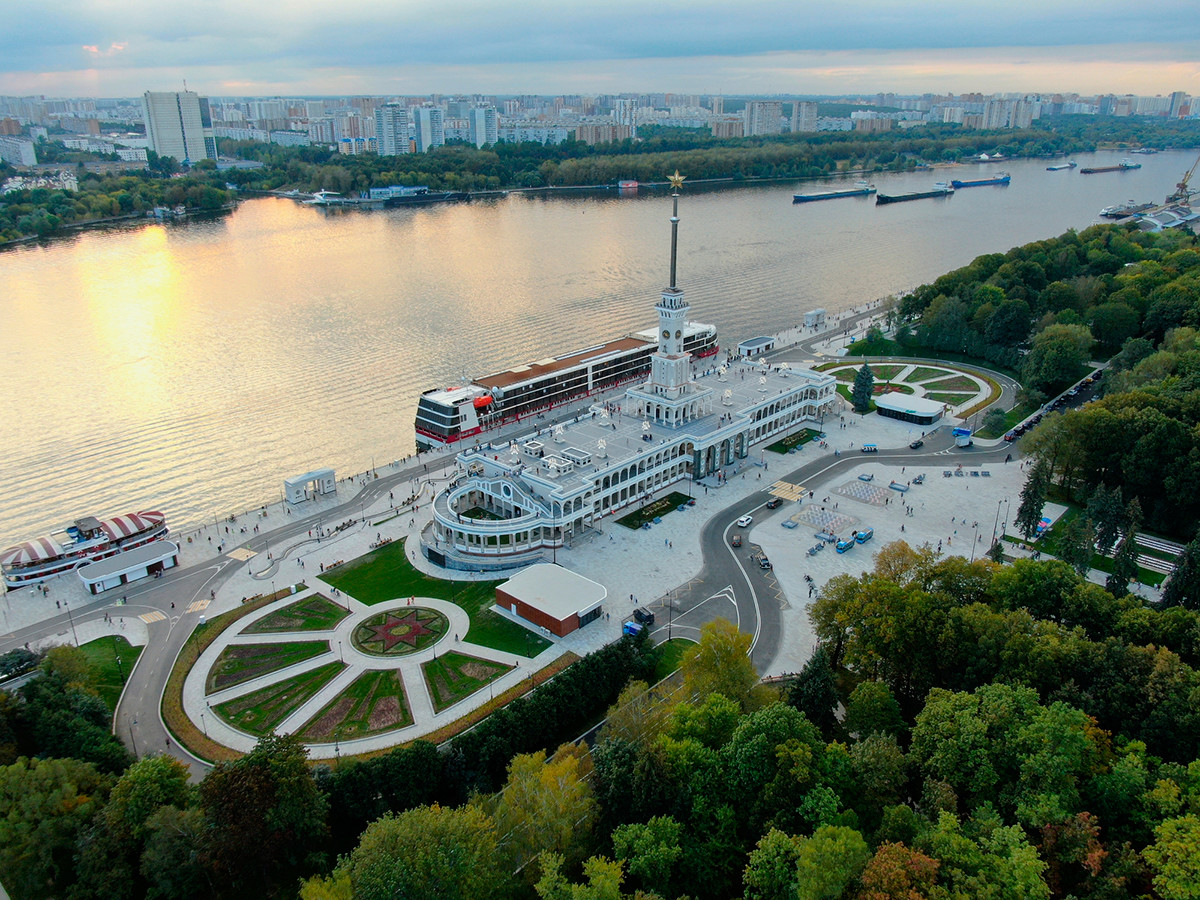 In the summer of 2020, the station, which resembles a ship, was enveloped in scaffolding, as the original 1937 edifice was being restored. Today, it is surrounded by fountains with children running around, endless flower beds and an all-new embankment that runs along a miniature replica of the Moscow Canal, replete with children’s paddle boats and other attractions. 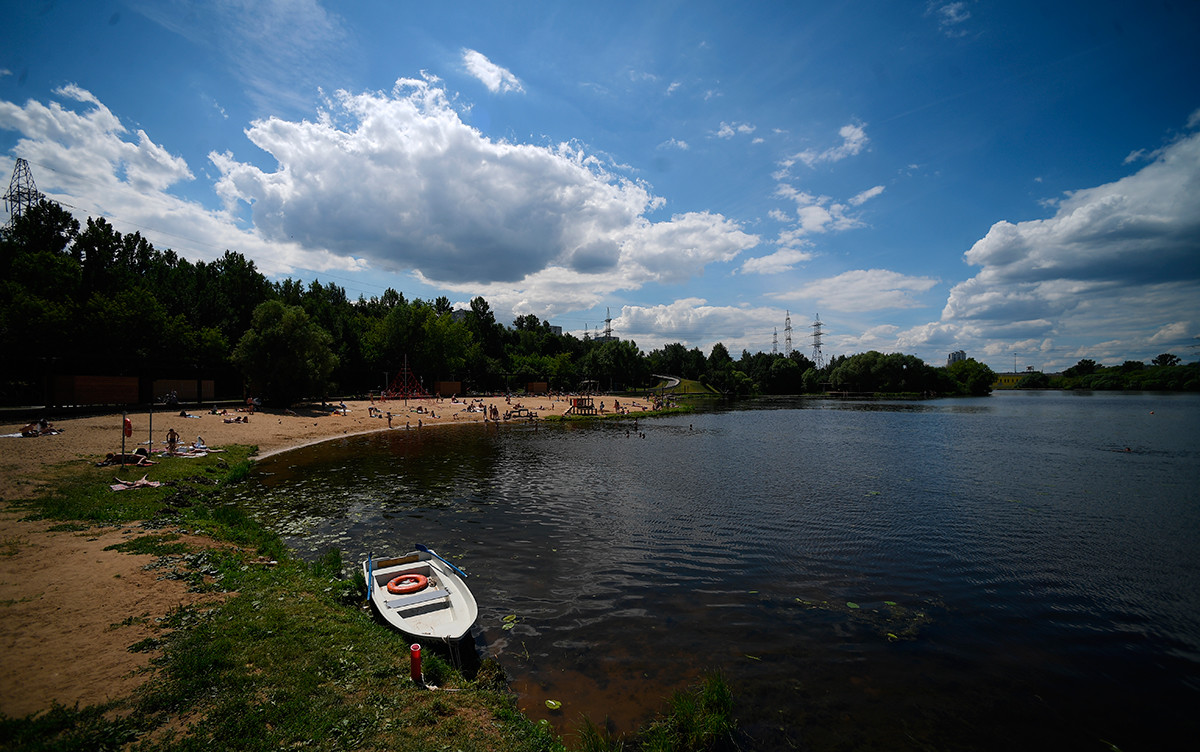 Her second favorite place for a post-work evening stroll is Druzhba (Friendship) Park, laid out for the 6th World Festival of Youth and Students in 1957. The main features are its monuments and sculptures dedicated to children, international friendship and war heroes, as well as the pond-reflected willows and the playgrounds. Thanks to these two parks, the air in the district differs sharply from that in central Moscow - that she is sure of. 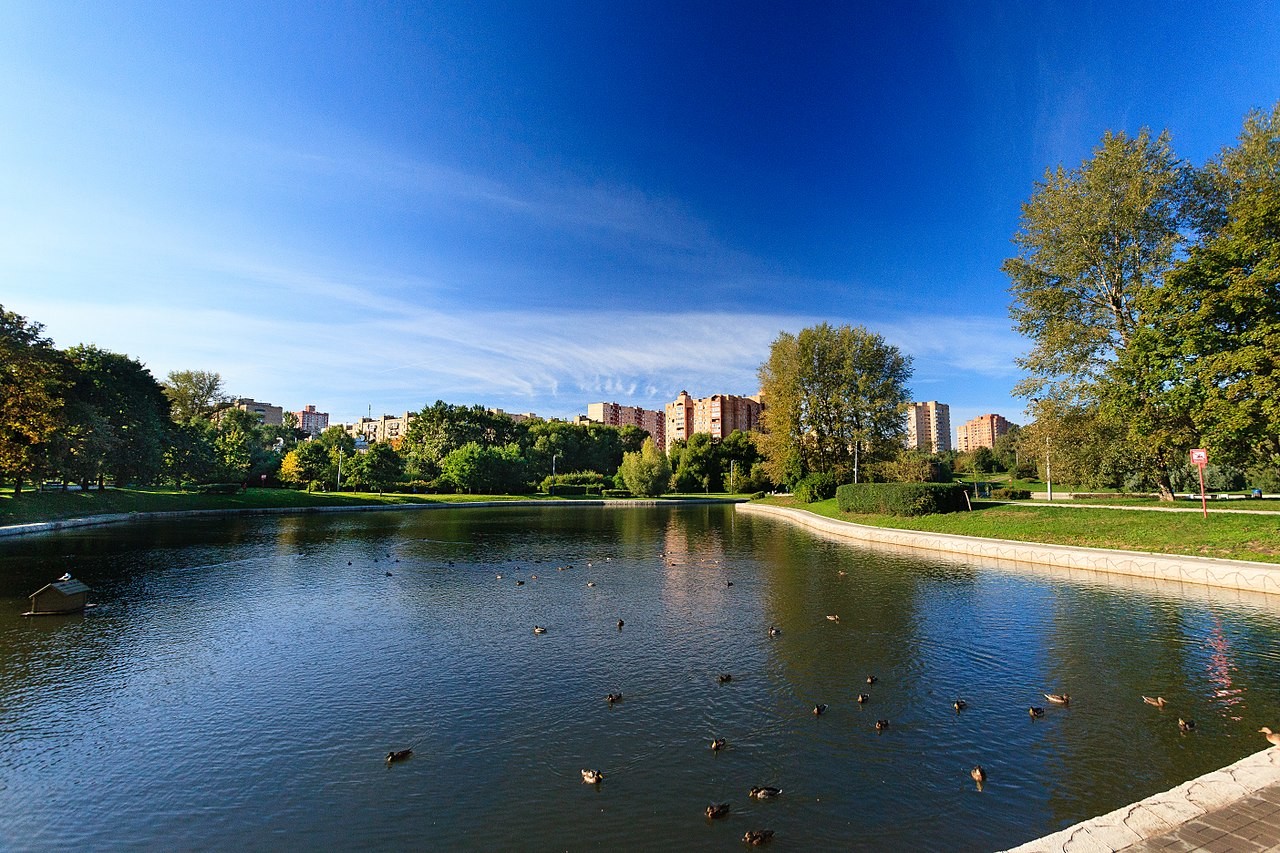 In summer, Levoberezhny beach (renovated under the ‘My district’ city improvement program in 2018) becomes the main focal point and Galina heartily recommends it to tourists.

“The beach is covered with sand, with a cafe, sun loungers and beach volleyball. It’s very relaxing,” she says, describing the place.

For social conflict expert Alexei Ivanushkin, Filevsky Park in the city’s west has always been the main symbol of Moscow. 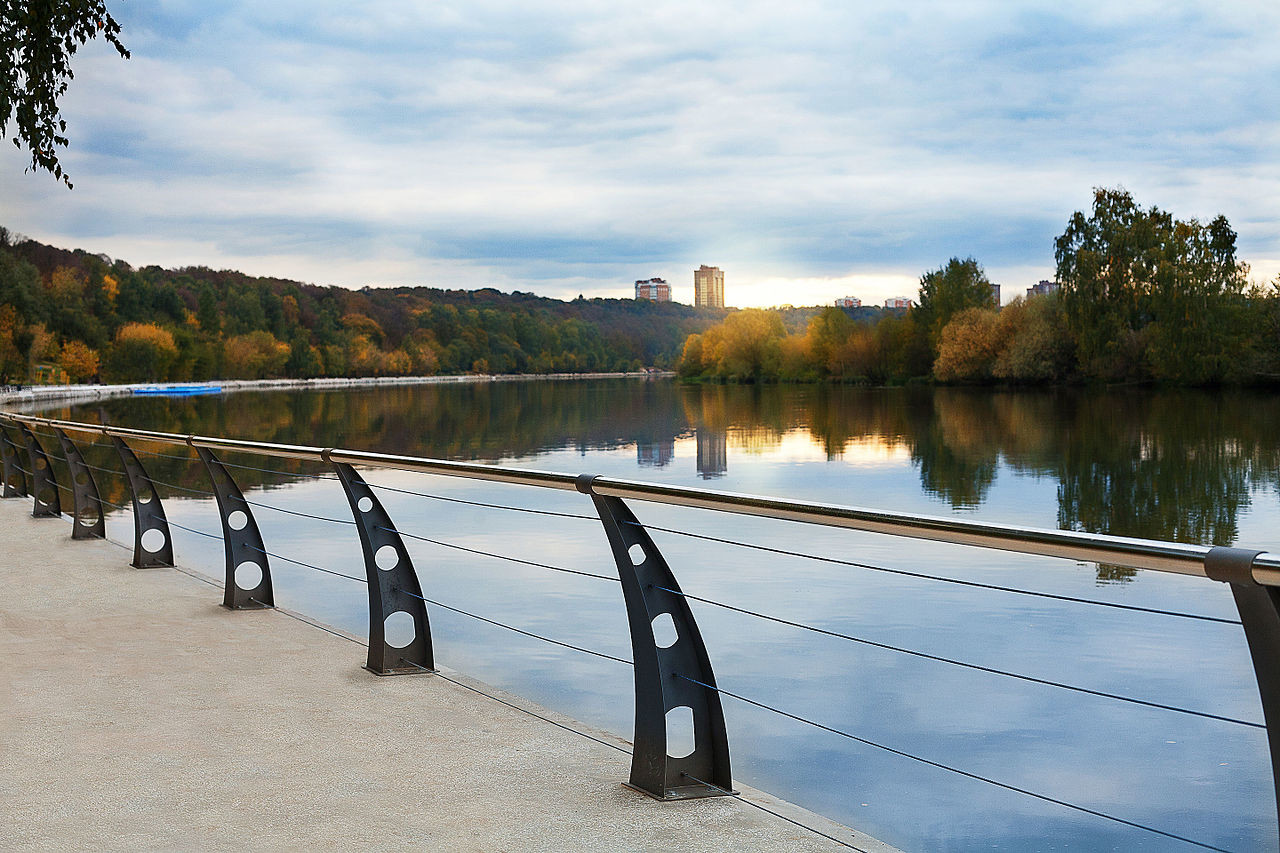 “I moved here in 2005 from St Petersburg, when the Gorbushka electronics market was one of Moscow’s main draws. There were always crowds of people, poorly dressed, but eager for gadgets. We used to go to the wooded parts of Filevsky Park, clearing branches, because it was impossible to get through. There were bottles everywhere that people had just left. In other words, it was a hub for alcoholics,” Ivanushkin shares his first impressions of the area. 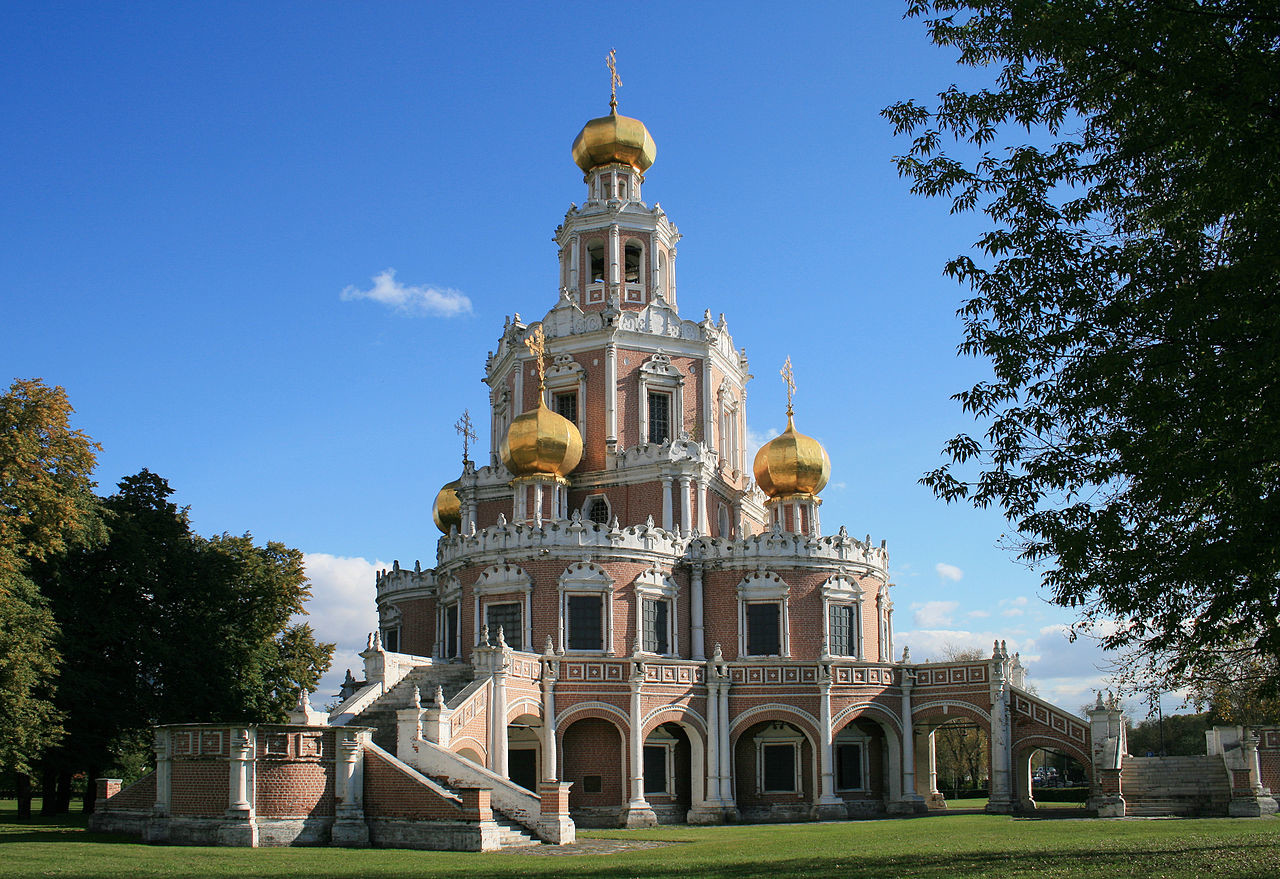 Fifteen years later, the now-landscaped embankment of the park is Alexei’s favorite spot for daily walks and he also advises tourists to visit.

“For me, the place is full of energy and inspires the soul,” says Ivanushkin.

No less significant is the Baroque Church of the Intercession at Fili, constructed in the late 17th century and financed by the boyar Lev Naryshkin, asserts Ivanushkin. In 1812, Napoleon’s soldiers converted the first floor of the church into a stable. In 1943, the lower church was used as a hospital and then, until 1963, as a warehouse for paper products. Highly recommended to anyone interested in unusual places of worship. 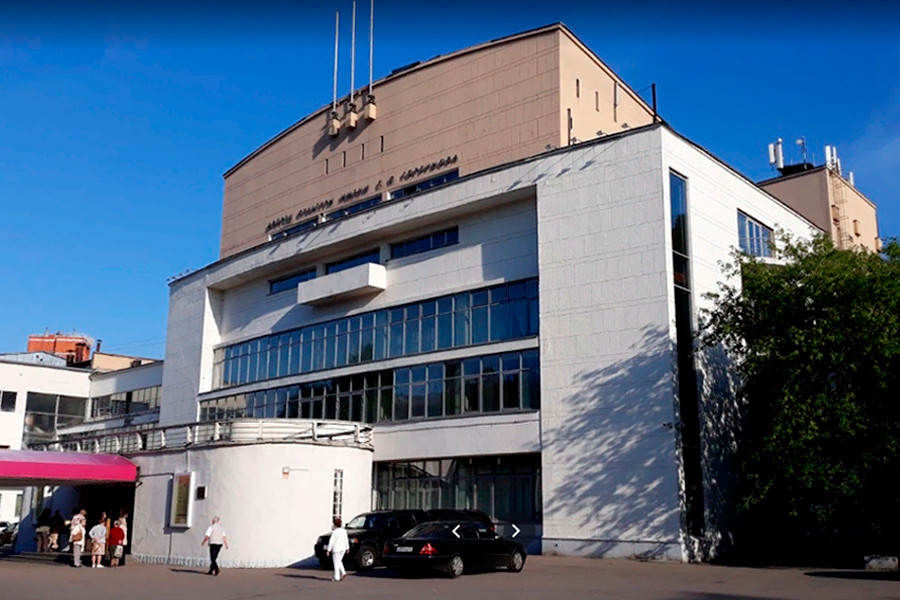 “The Suvorov Military School stood opposite the church. And every year at the graduation ceremony, it was a tradition for graduates to secretly raise the flag of the armed forces on the building. They tried to stop it, but no one was ever punished,” recounts Ivanushkin.

To learn more about Russian rock music, Alexei advises a visit to the Gorbunov Palace of Culture, named after Sergei Gorbunov, the director of an aircraft factory and built in 1938. In 1986, it housed the first “rock-n-roll laboratory” in Moscow, earning the building a reputation as the capital’s premier venue for rock concerts and festivals.

To learn more about sports facilities built for the 1980 Moscow Olympics, Krylatskoye is the place to start, says local resident Yulia Zhiltsova, who moved to Moscow from Siberia and has lived in the city’s western part for 21 years. 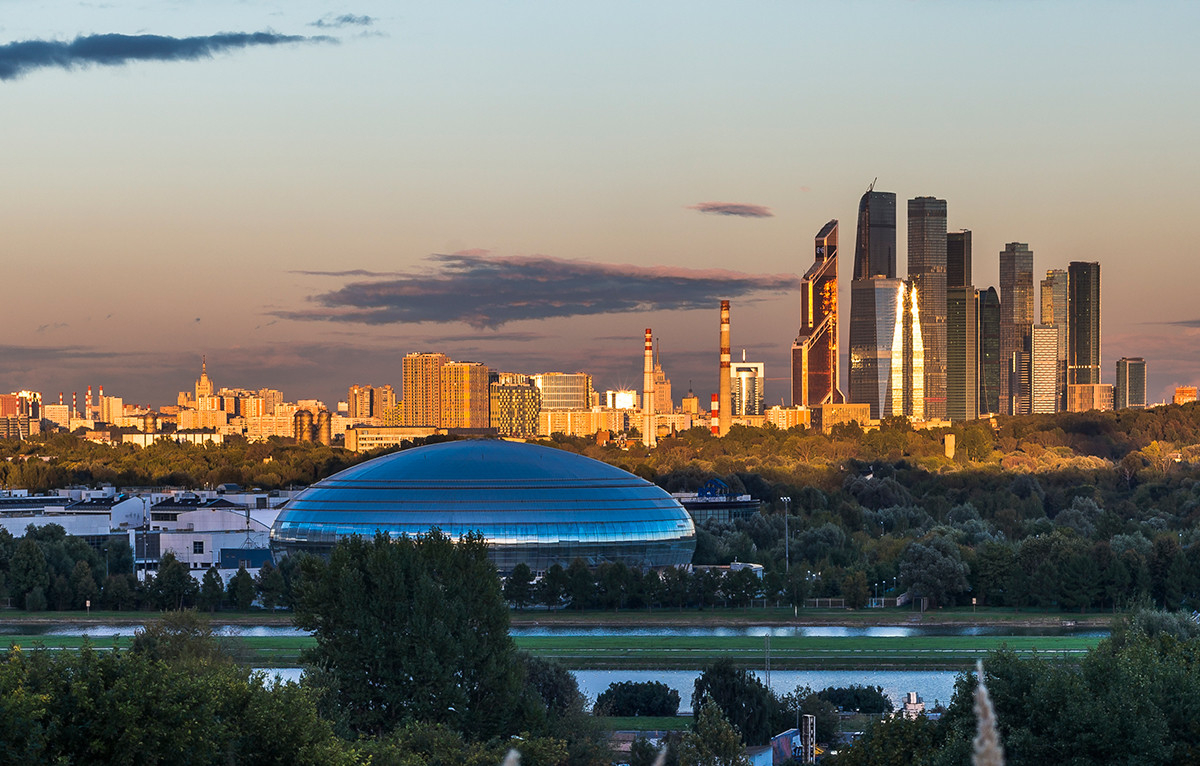 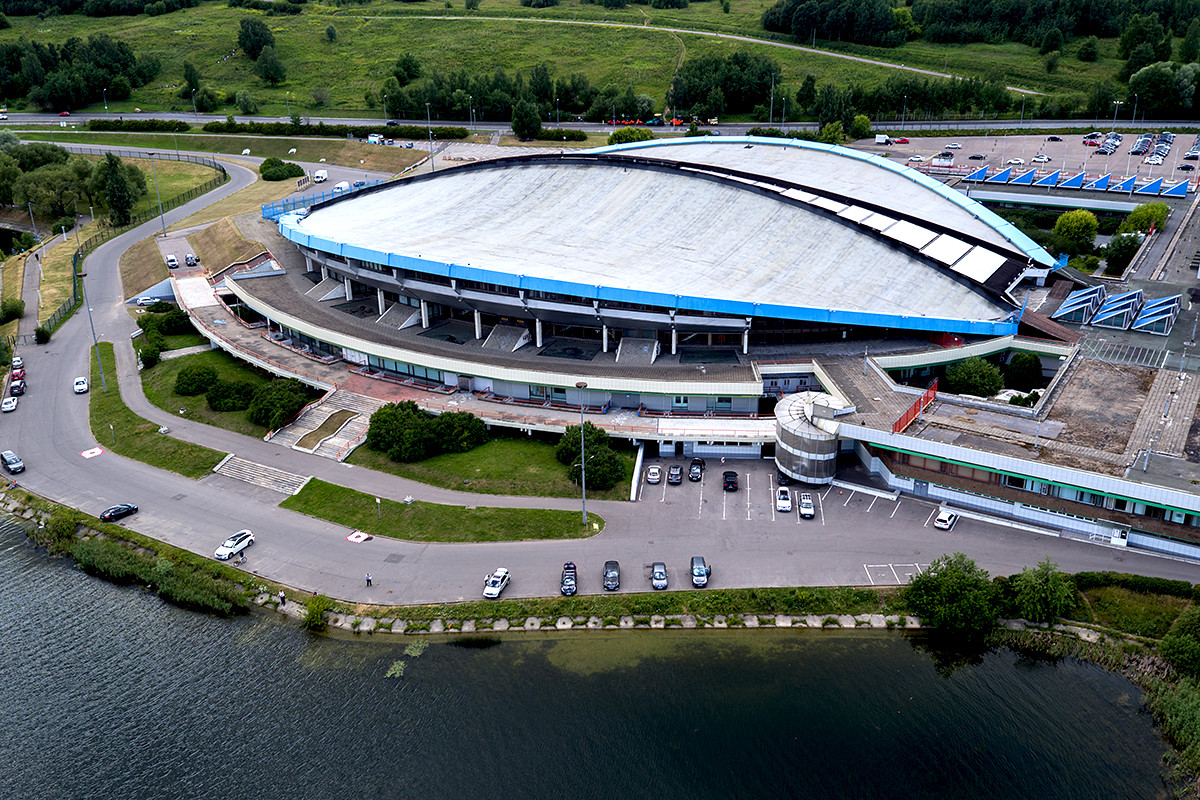 In her free time, Yulia enjoys what are perhaps the capital’s most beautiful views from West Krylatsky Hill in the nearby park, offering a panorama of Moscow-City, the Church of the Nativity of the Most Holy Theotokos and the arch of Zhivopisny Bridge.

She advises tourists to climb the hill, take shots of the stunning Moscow backdrops and escape the hustle and bustle of the central historical districts. 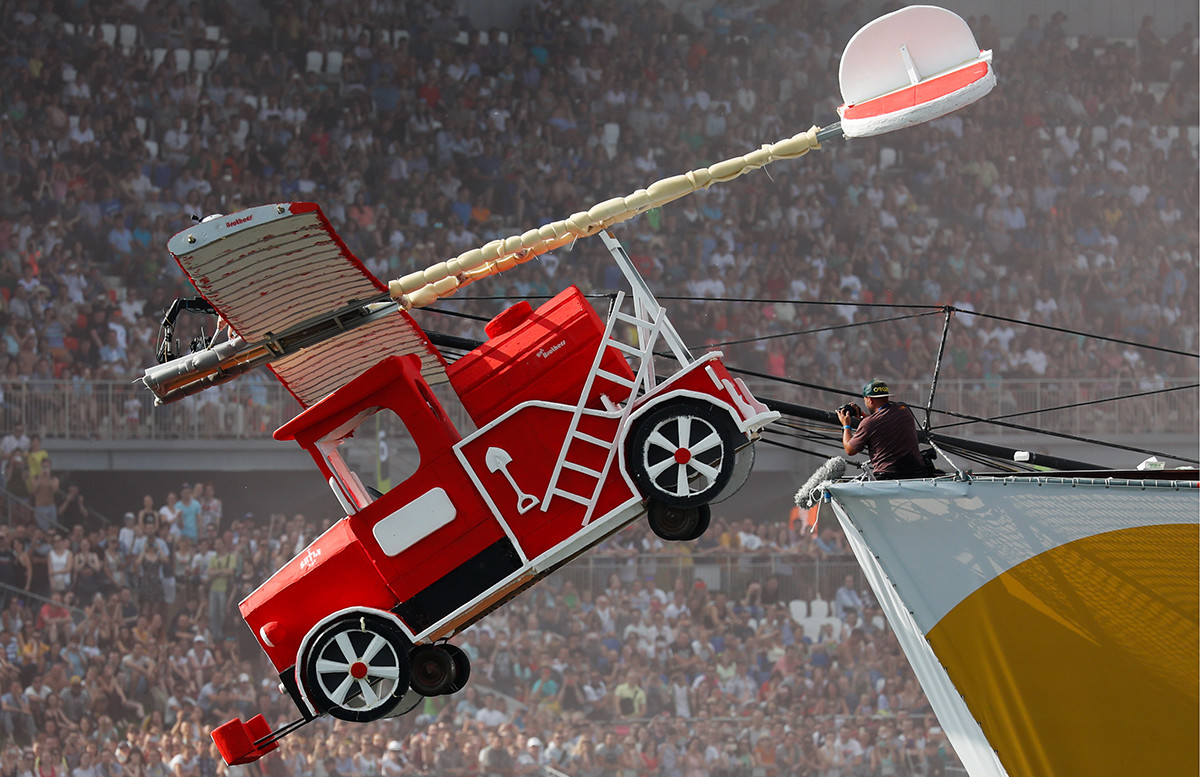 “Here you feel at one with nature, yet central Moscow is just 20 minutes down the road. There are no crowds, even on weekends. The center is packed and impersonal, but here the atmosphere is a bit more homely,” Zhiltsova explains.

Khodynskoe Field in the Khoroshevsky district is notorious as the site of a deadly crush during celebrations to mark the coronation of Nicholas II in 1905. Today, it looks more like a futuristic city with fantastical towers, art objects in the local park and dancing fountains. By 8 p.m. on weekdays, the park is especially crowded — school students shoot TikTok dance videos and ride skateboards, while children run with their parents through the mirror maze. 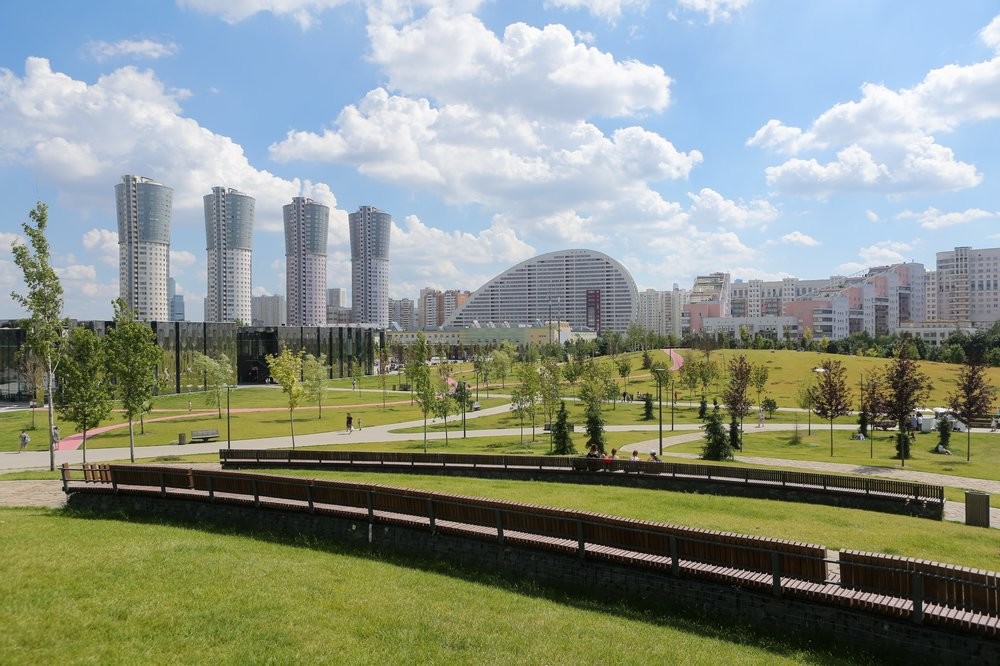 Local resident Alexander Lyubarsky moved to Khodynka in 2010 and, as a photographer, immediately fell in love with the views.

“Every part of Khodynsky Park — be it a swing, a pond, a sports ground stylized as an airplane and helicopter, or the fountains behind us — is photogenic,” explains Lyubarsky. The Park appeared in 2018 under the ‘My district’ city renovation program. 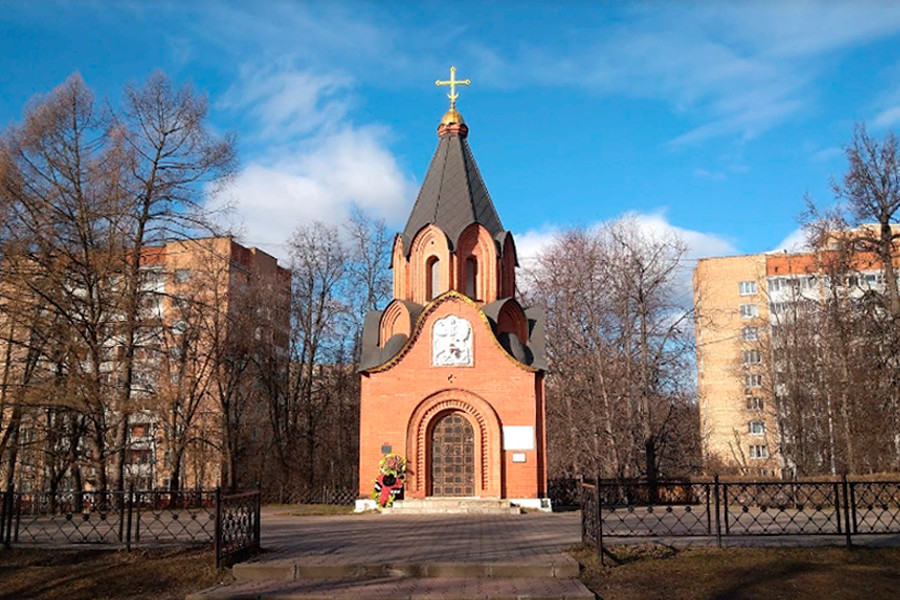 Chapel of the Transfiguration of the Savior in the Memorial Park complex of world war I heroes. Built in 1998

His second favorite place for photos is the small Berezovaya Roscha (“Birch Grove”) Park (renovated in 2020 as part of the ‘My district’ program), which, besides birches, is home to maple, ash, and linden trees.

Every visitor to Khodynka simply must go to the World War I Heroes Memorial Park at the Bratskoe (Fraternal) Cemetery, Lyubarsky insists. 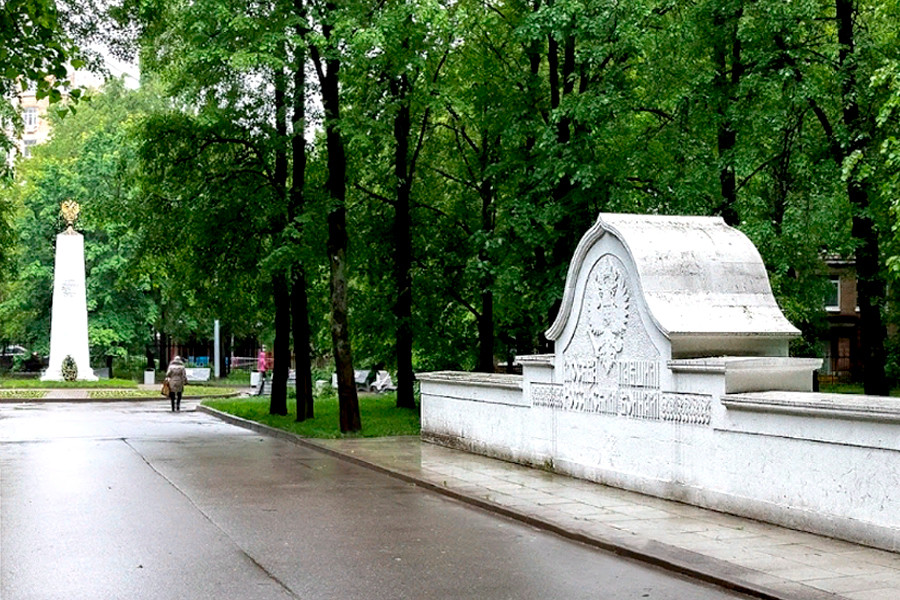 “There’s a wonderful chapel with the buried ashes of Grand Duke Nikolai Romanov [the grandson of Nicholas I and an uncle of Nicholas II who was the Russian commander-in-chief during World War I]. Everything’s also very photogenic there,” says Lyubarsky. 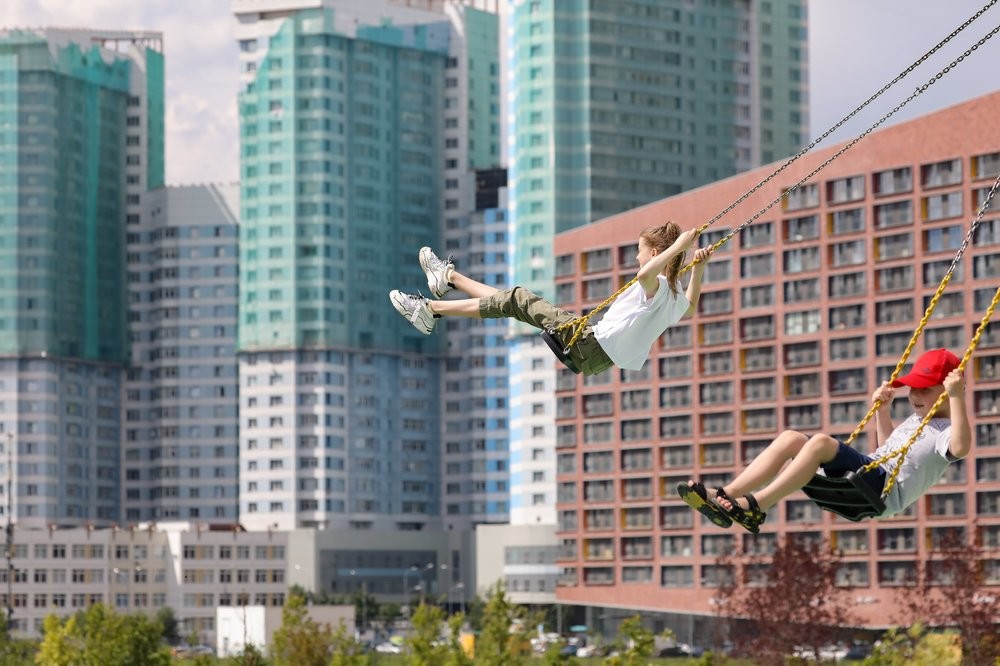 In his opinion, every foreign tourist should visit Khodynka for a glimpse of what the future Russia might look like.

“It would be good if all the suburbs could be like this. I’d love this to spread beyond the Moscow Ring Road [MKAD],” he concludes.