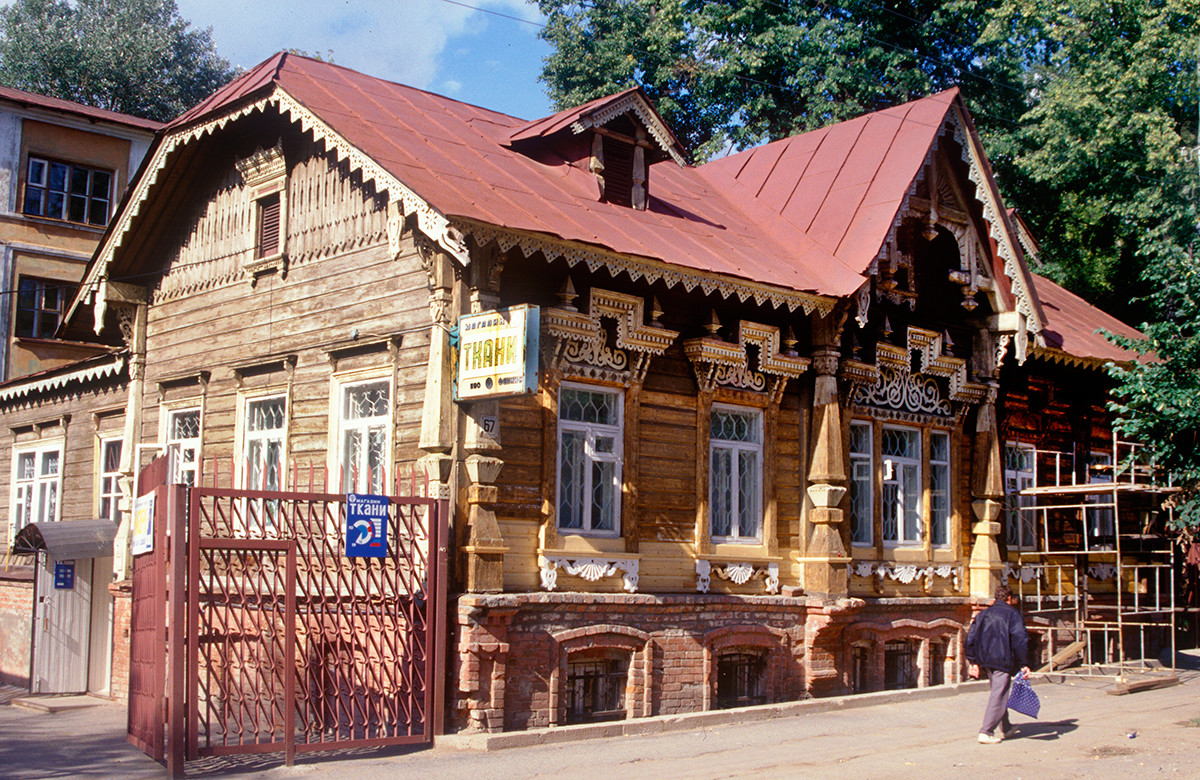 The city of Perm, a major industrial and administrative center located just on the European side of the northern Urals, extends for miles along the high east bank of the Kama River. In the summer of 1909, Russian photographer and chemist Sergei Prokudin-Gorsky visited the city on the first of three expeditions to the Ural Mountains. He took views ranging from ruggedly beautiful nature to large factories. 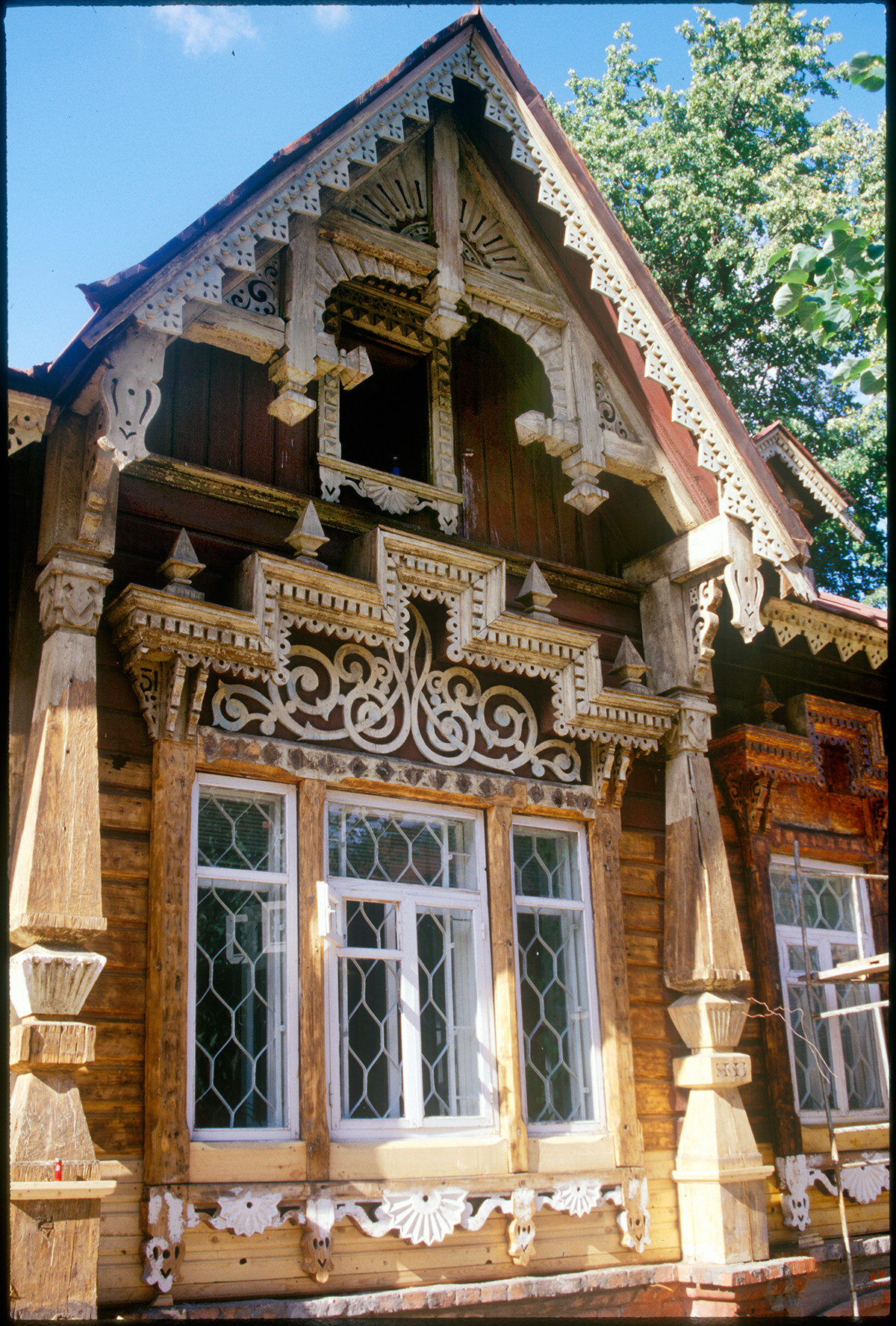 He also took his tripod-mounted camera to the hillocks to the east of the city from where he took panoramic views of the central district that give a sense of its urban neighborhoods. One of the striking features of Prokudin-Gorsky’s panoramas is the prevalence of wooden houses. In fact, most dwellings in the provincial cities of Russia’s forested heartland were built from wood even into the 20th century. Built of logs on a brick foundation, houses in urban areas were usually clad in plank siding with decorative details. 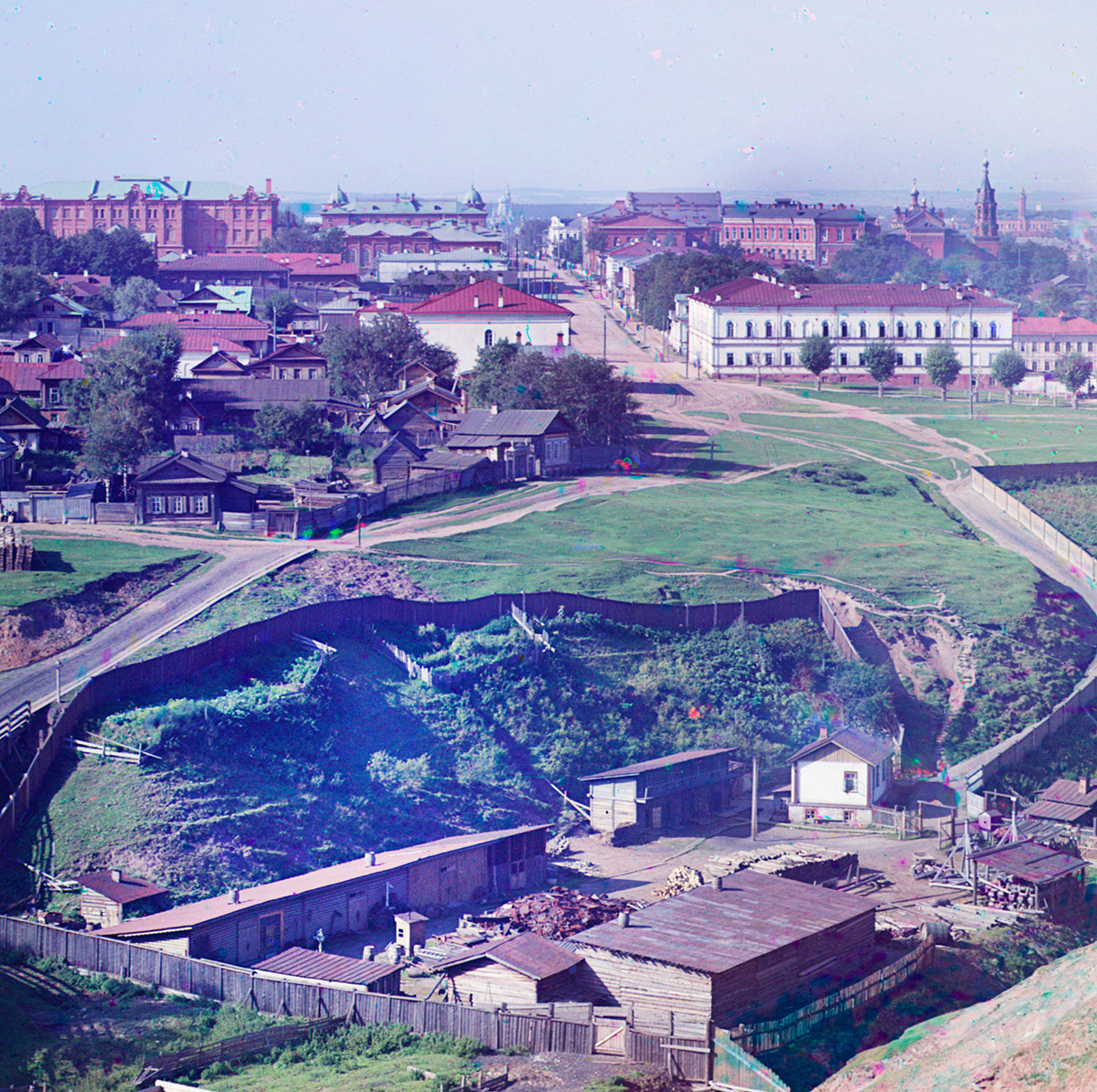 My first visit to the Perm region occurred nine decades after Prokudin-Gorsky, in the summer of 1999. Subsequent trips, in 2014 and 2017, revealed a city marked by new construction.

From copper smelter to industrial powerhouse 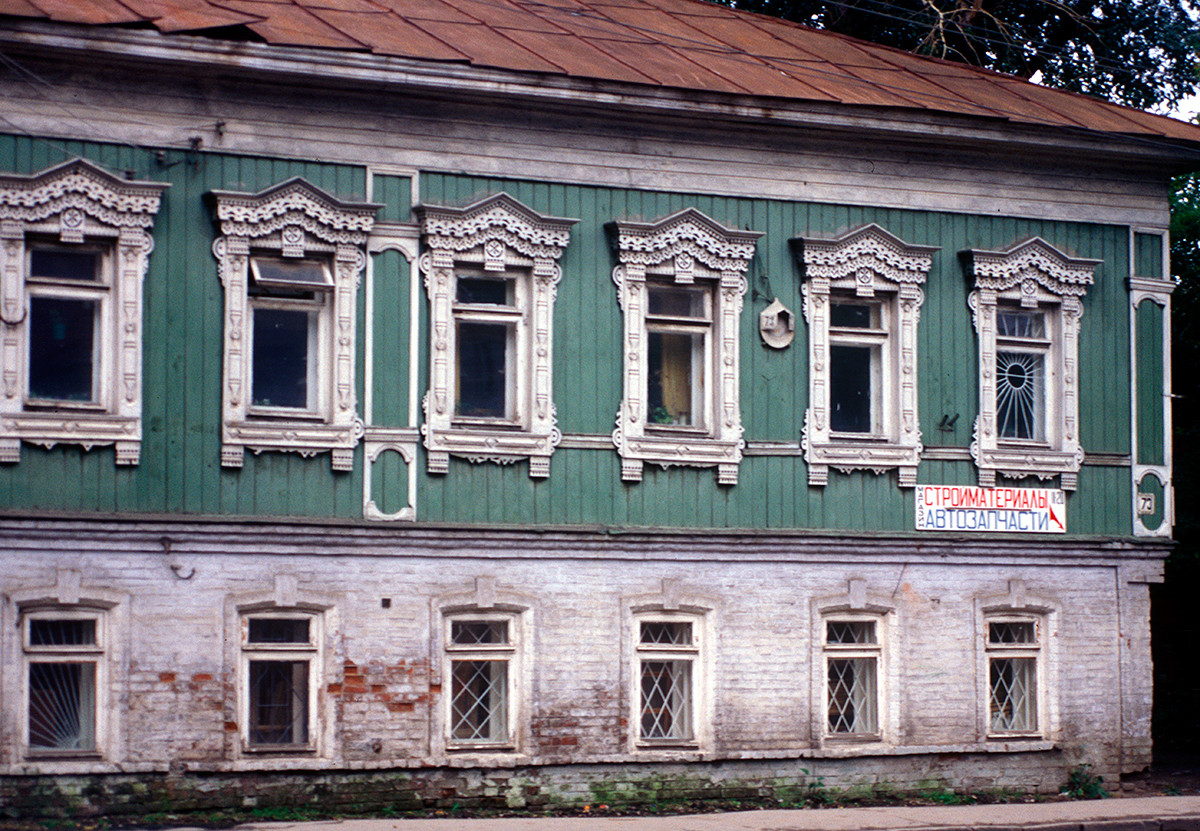 The settlement of Perm originated in the early 18th century as part of the quest by Peter the Great to exploit ore deposits in the Ural Mountains. These raw materials provided secure sources of essential industrial-grade metals needed above all for the army. With nearby sources of copper ore, dense forests and ample water supplies, a site near the village of Yegoshikha was considered ideal for a large copper smelter. Construction began on the main Yegoshikha factory on May 4, 1723, which is considered Perm’s founding date. The name “Perm,” which in the medieval period referred to a large area in the Ural Mountains, was officially adopted in 1781 after a command by Catherine the Great that transformed the settlement into an administrative center for the Urals. 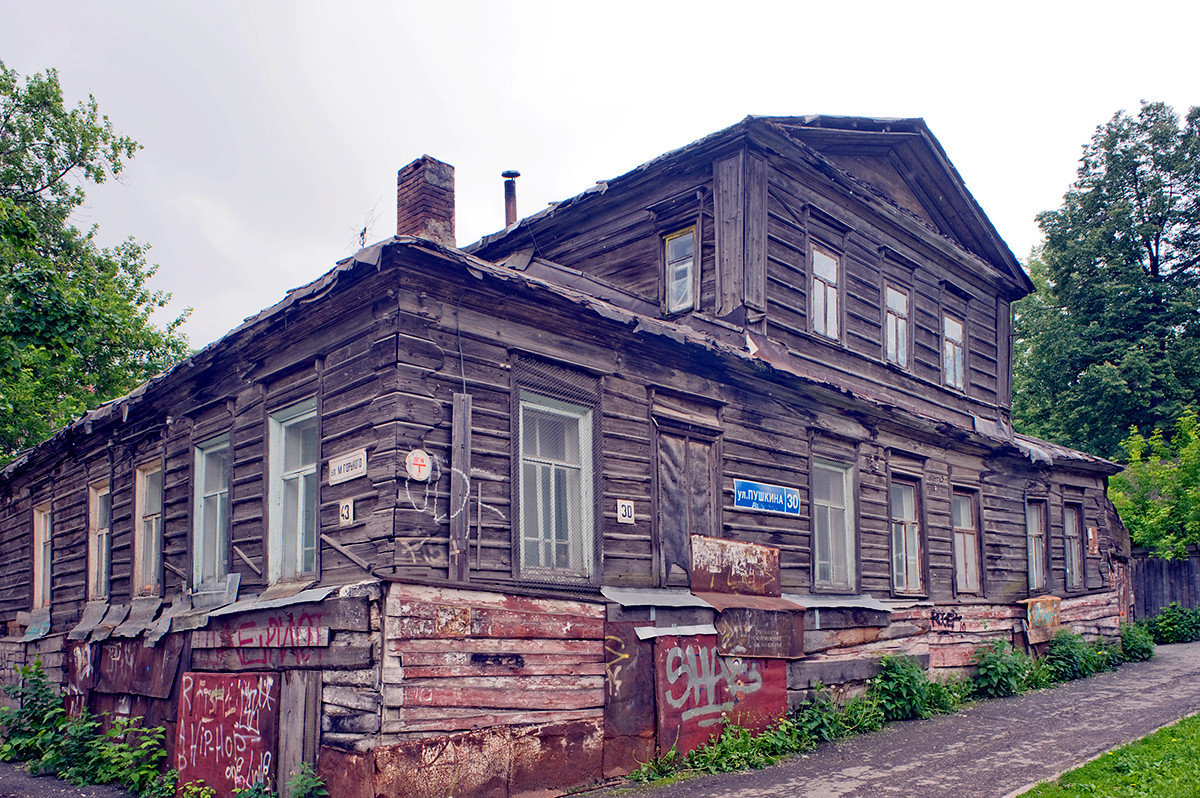 Because of its favorable location within the Volga River basin, Perm during the 19th century developed into a transportation center for salt and other minerals, ​as well as ​metal ore​ and the products of metal factories throughout the western Ural Mountains. Perm’s growth at the turn of the 20th century was reflected in Prokudin-Gorsky’s views of the central city, with its belching smokestacks. Despite sweeping changes in the century following his visit, several of the buildings captured in his photographs remain. 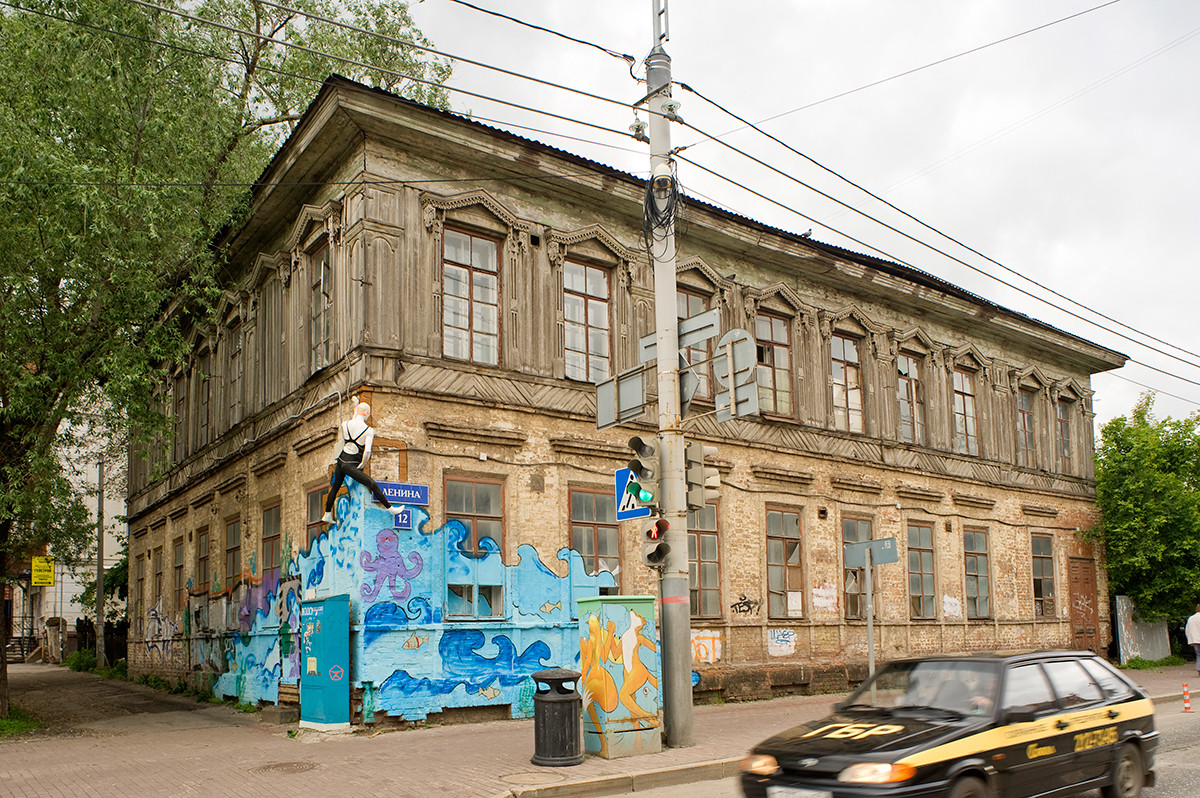 However, most of the wooden houses visible in Prokudin-Gorsky’s panoramas have vanished under the pressure of urban development, increasing land prices and the difficulty of maintaining the material of wood. Fortunately, I have been able to document isolated examples of wooden houses in the central city, some of which are ornamented with festive decorative features such as carved window surrounds (nalichniki) typical of the late 19th and early 20th centuries. 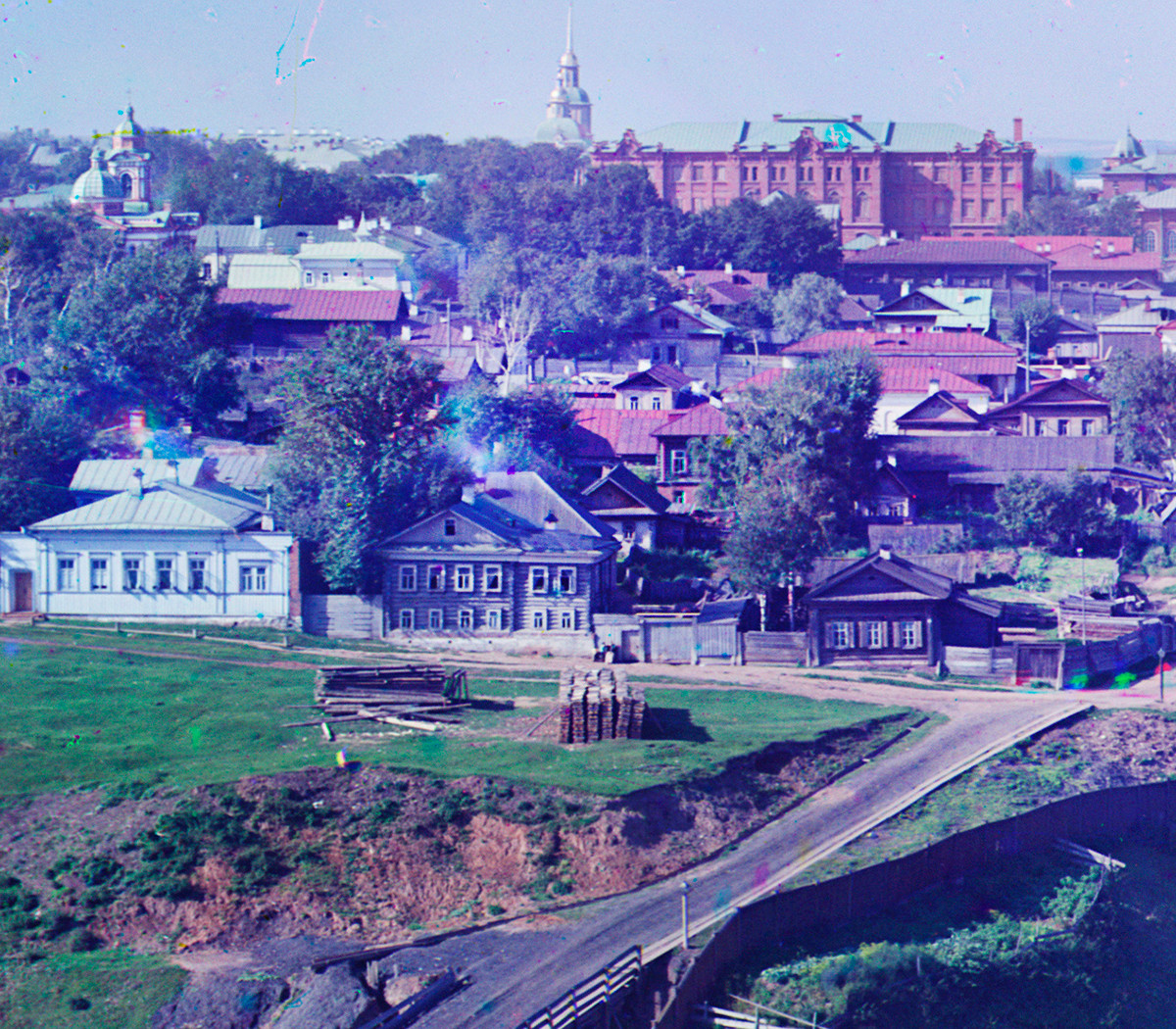 One of the best-preserved examples is a house at 67 Perm Street consisting of a basic log structure on a brick basement. In 1883 the owner, Alexandra Tokareva, petitioned to expand the structure and rebuild the front part in a richly decorated manner that followed Russian interest in traditional vernacular ("folk") styles in the latter part of the 19th century. 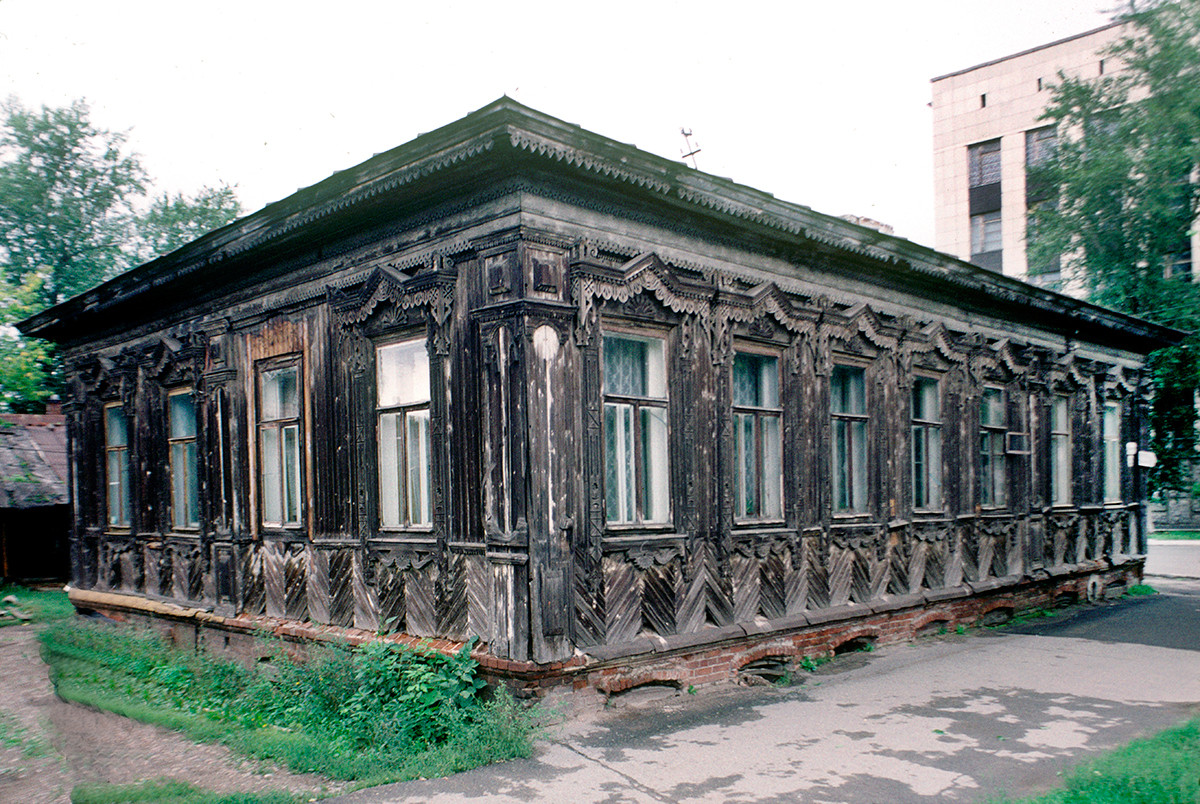 With its elaborate carved and milled woodwork, the Tokareva house acquired the name "teremok" ("little tower chamber"), a term applied to similarly decorated structures in the Moscow area. In 1911, records show that the house belonged to Claudia Tokareva.

In 1985, the Tokareva "teremok" was renovated for use as a small shop. It is now protected as a registered landmark. Other wooden houses that I have photographed are likely to disappear, if they have not already.

A sense of village life 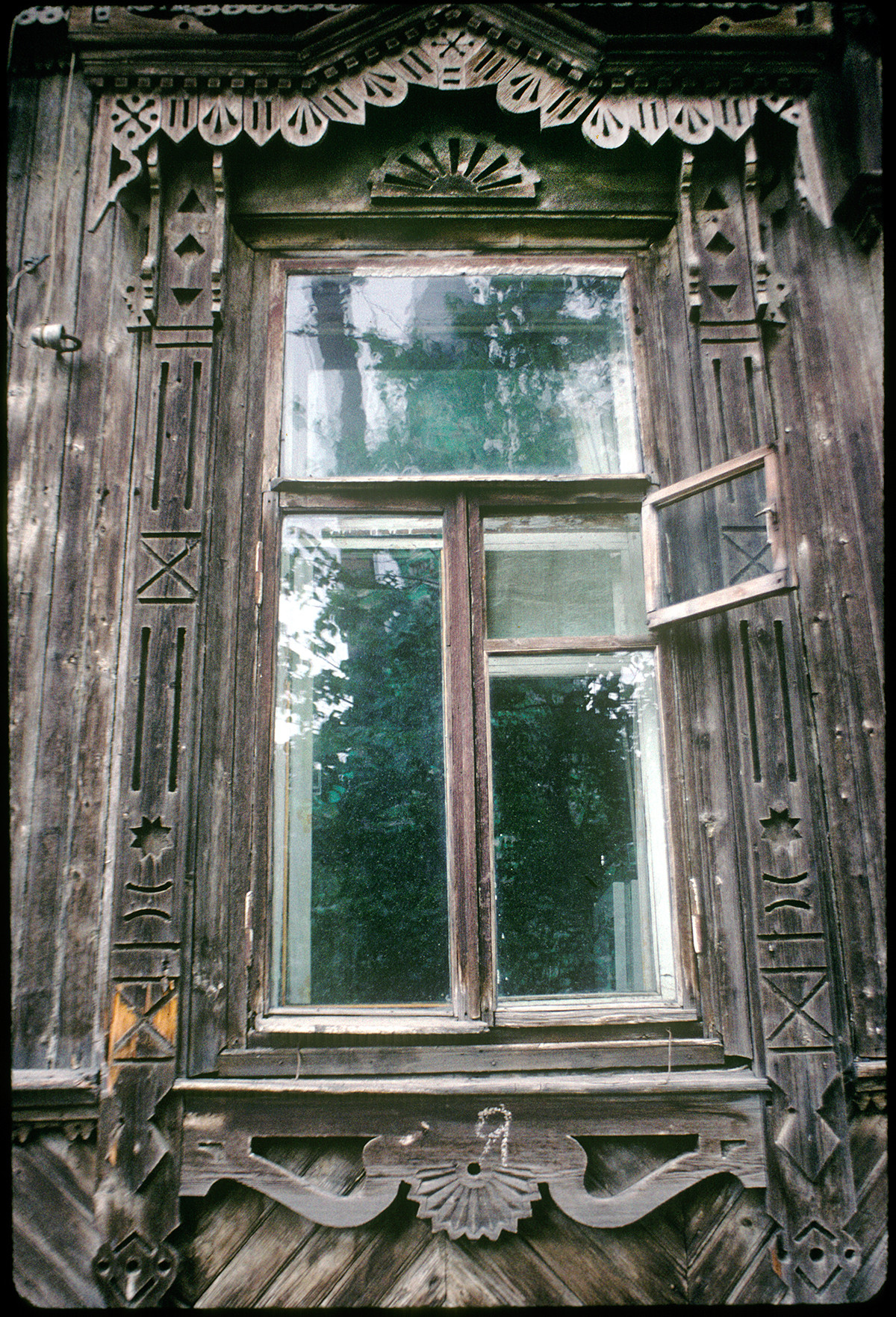 Among Prokudin-Gorsky’s sweeping views of Perm is an outlying village known as Razgulyai, a name that can be loosely translated as “unwind,” or “let the good times roll” and was often associated with taverns. (Moscow had a Razgulyai district named after a popular tavern.) 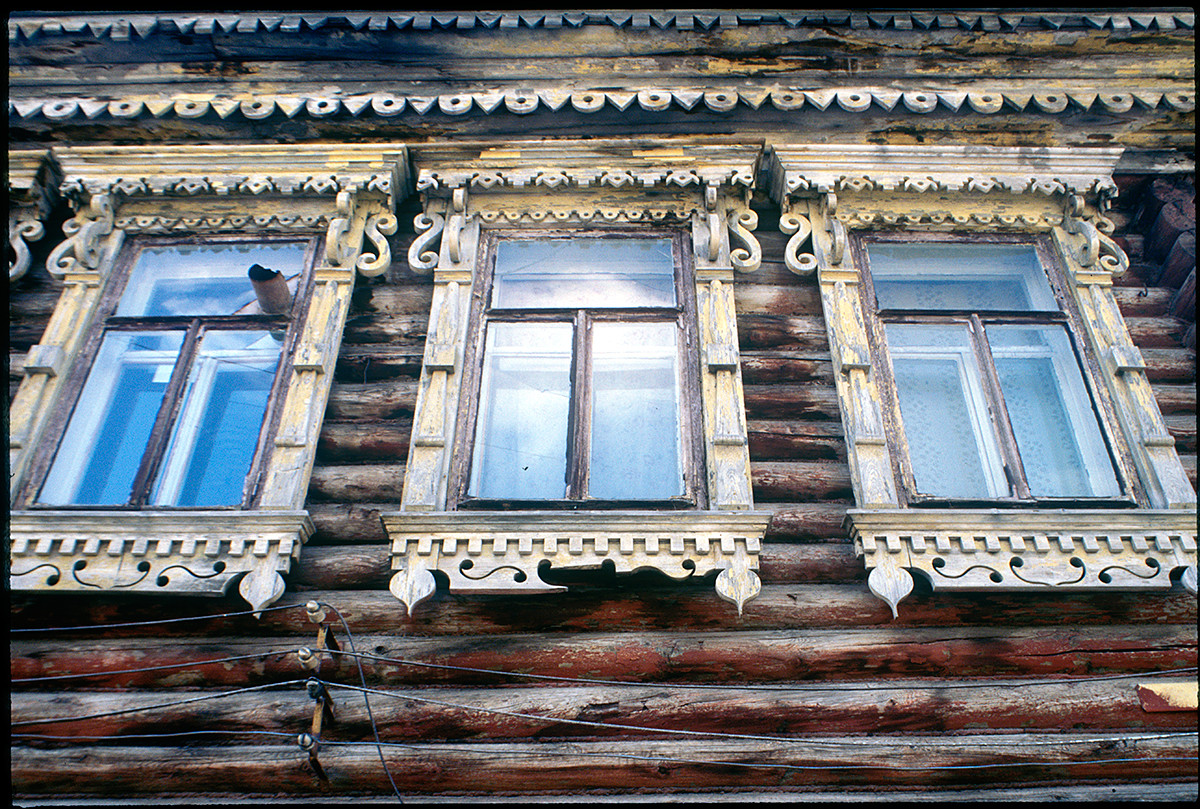 When Perm gained a proper town plan in the early 19th century, the Razgulyai district was excluded and thus retained the appearance of comfortable disorder captured by Prokudin-Gorsky. Everywhere here we see wooden houses surrounded by barns and sheds.

It should be emphasized that wooden houses in Russian towns were related to village life. Although much of that environment has also disappeared, Perm is fortunate to have a nearby open-air museum known as Khokhlovka (pronounced HO-hlovka), named after a picturesque village nearby on the small Khokhlovka River. Located less than an hour's drive north of Perm, the Khokhlovka park is one of those special journeys back into the region’s past. 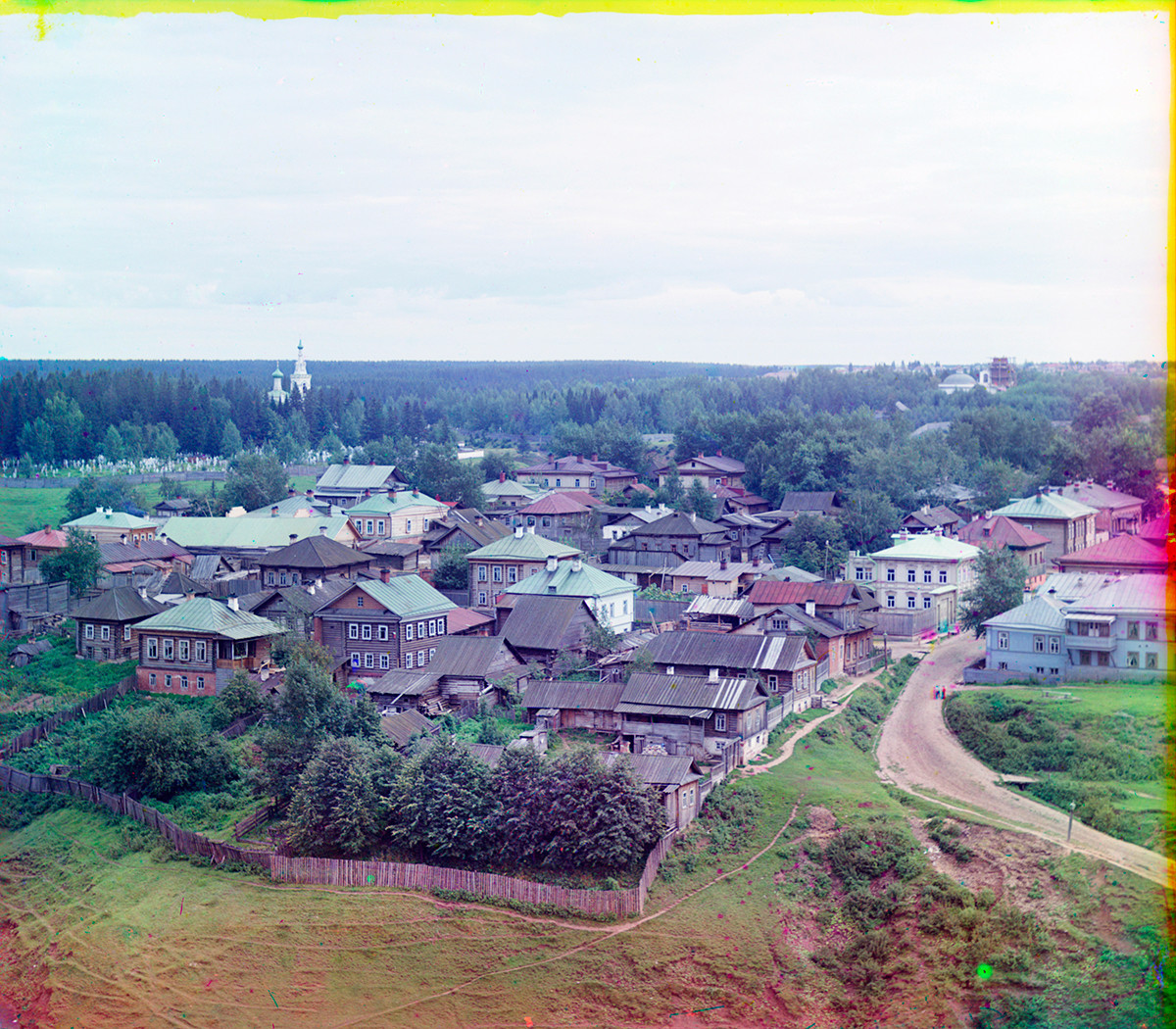 Architectural preservationists and scholars began plans for the park in 1969, and with the approval of the Ministry of Culture in 1971, regional authorities set aside a beautiful hilly site some 40 hectares in size leading down to the west bank of the Kama River Reservoir. The Khokhlovka park opened to the public in 1980. 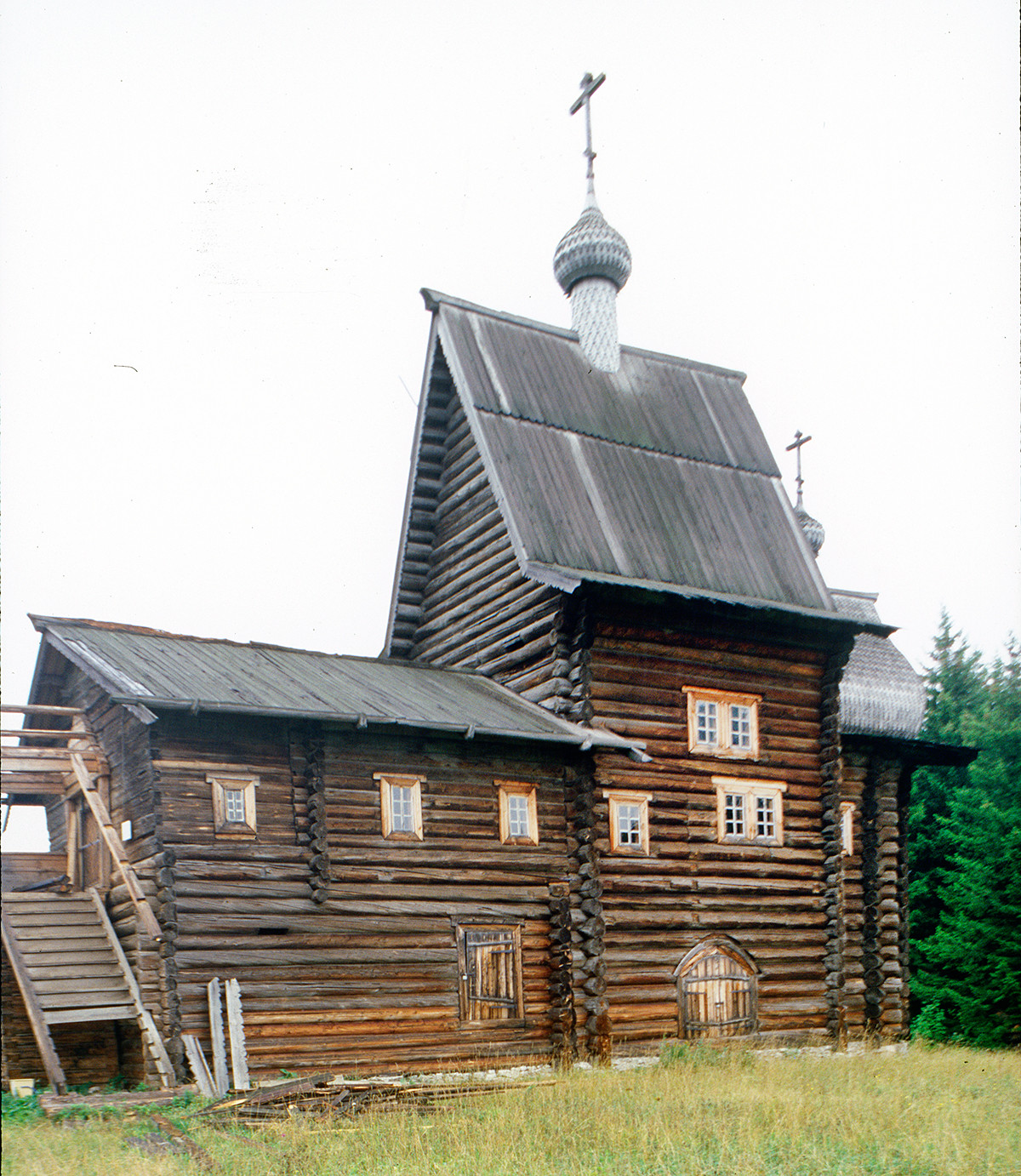 Khokhlovka. Log Church of Nativity of the Virgin (1694), originally at the village of Tokhtarevo. August 22, 1999

The spacious natural landscape consists of clusters of log buildings transported from various parts of Perm Province. They include two churches and a bell tower, log houses (two of which have restored interiors), barns, a village fire station, and a windmill with its interior intact. There are also two log churches originally built at the turn of the 18th century.
The log houses at Khokhlovka reflect the modest dimensions typical to the region. One example is the V. I. Igoshev farmstead from the village of Gribany. Situated on the Teles River (a southern sub-tributary of the Kama River), Gribany was too small to have its own church, but the fertile river lands provided a reasonably secure existence for peasant farmers in the mid-19th century, when this house (izba) was built. 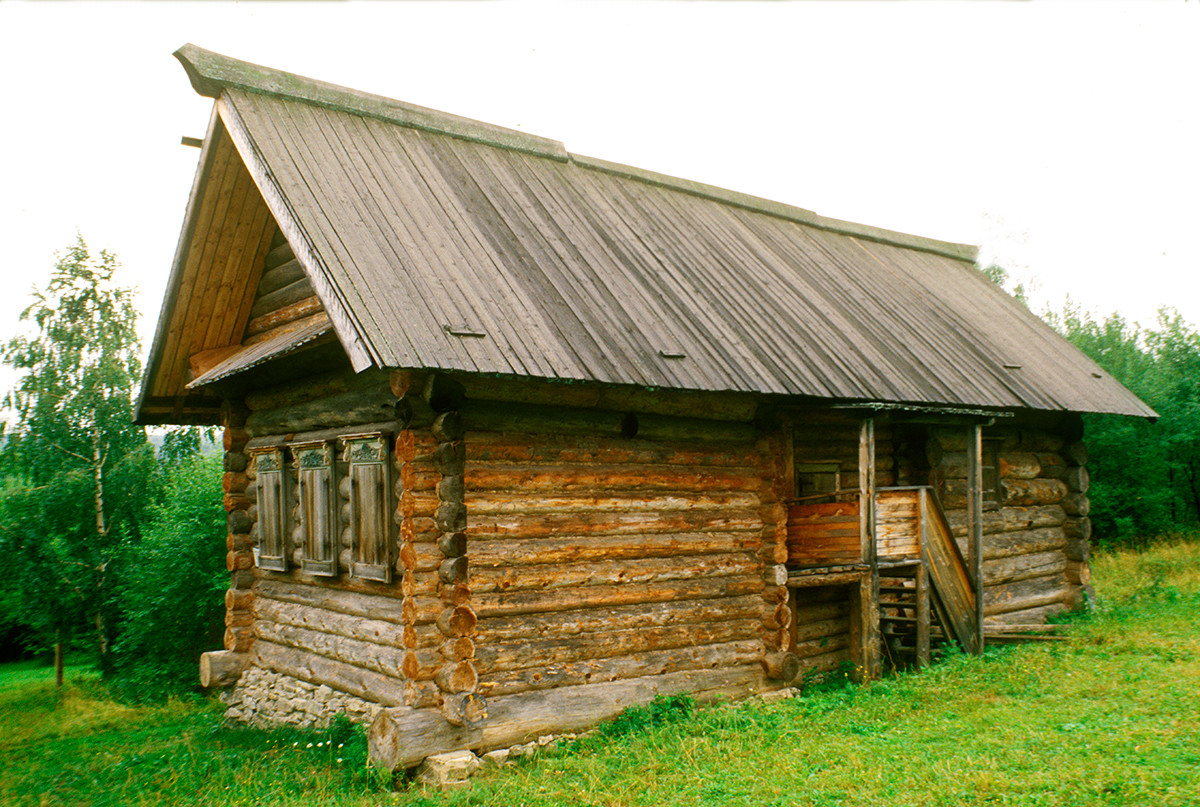 The elongated plan of the Igoshev izba contains two living areas, with a vestibule for the elevated entrance in the center. The walls are of notched pine logs with a bottom course of large logs placed on a base of field stone. The tightly insulated plank roof extends well beyond the walls to protect the structure from heavy snowfalls and rainy summers. The windows have wooden shutters. The main element of the brightly furnished interior is the brick stove.

Although much larger, the Tokareva Teremok in Perm can be seen as a nostalgic reflection of traditional design visible at the Khokhlovka park. This is a milieu that would have been very familiar to Prokudin-Gorsky. 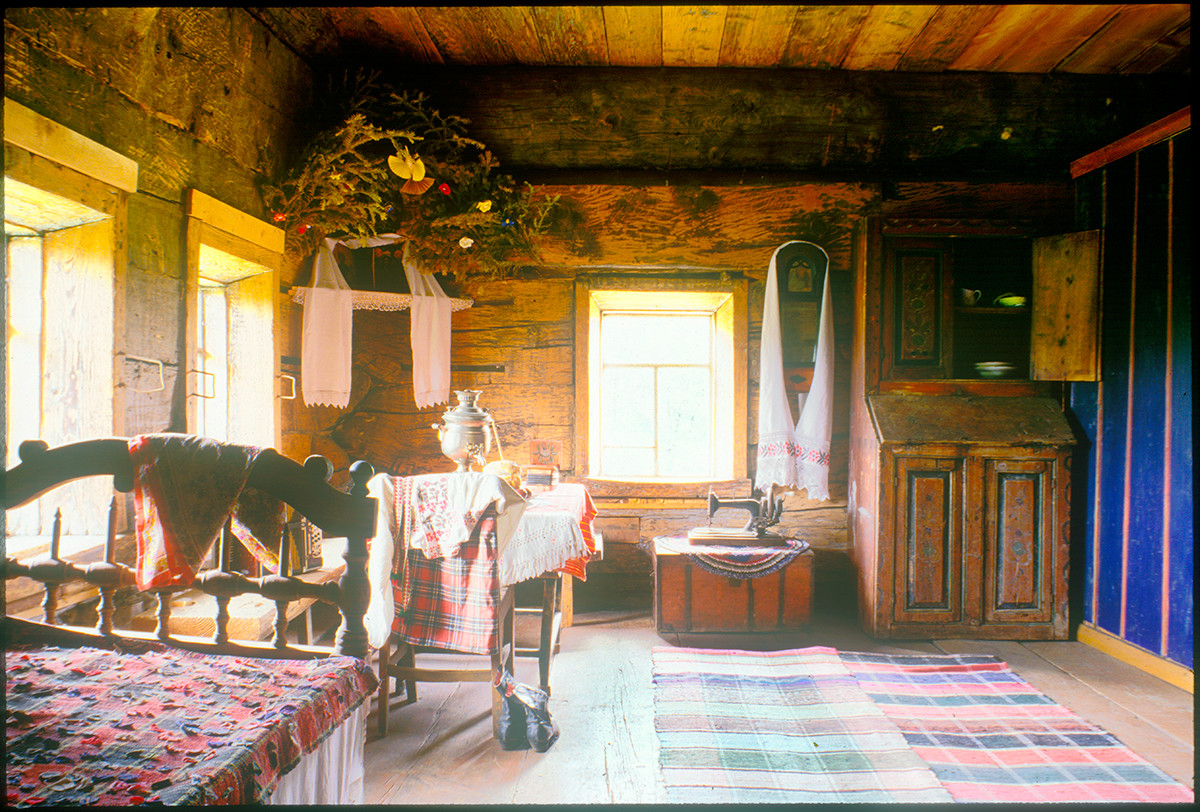