The most fairy-tale houses of old Moscow (PHOTOS) 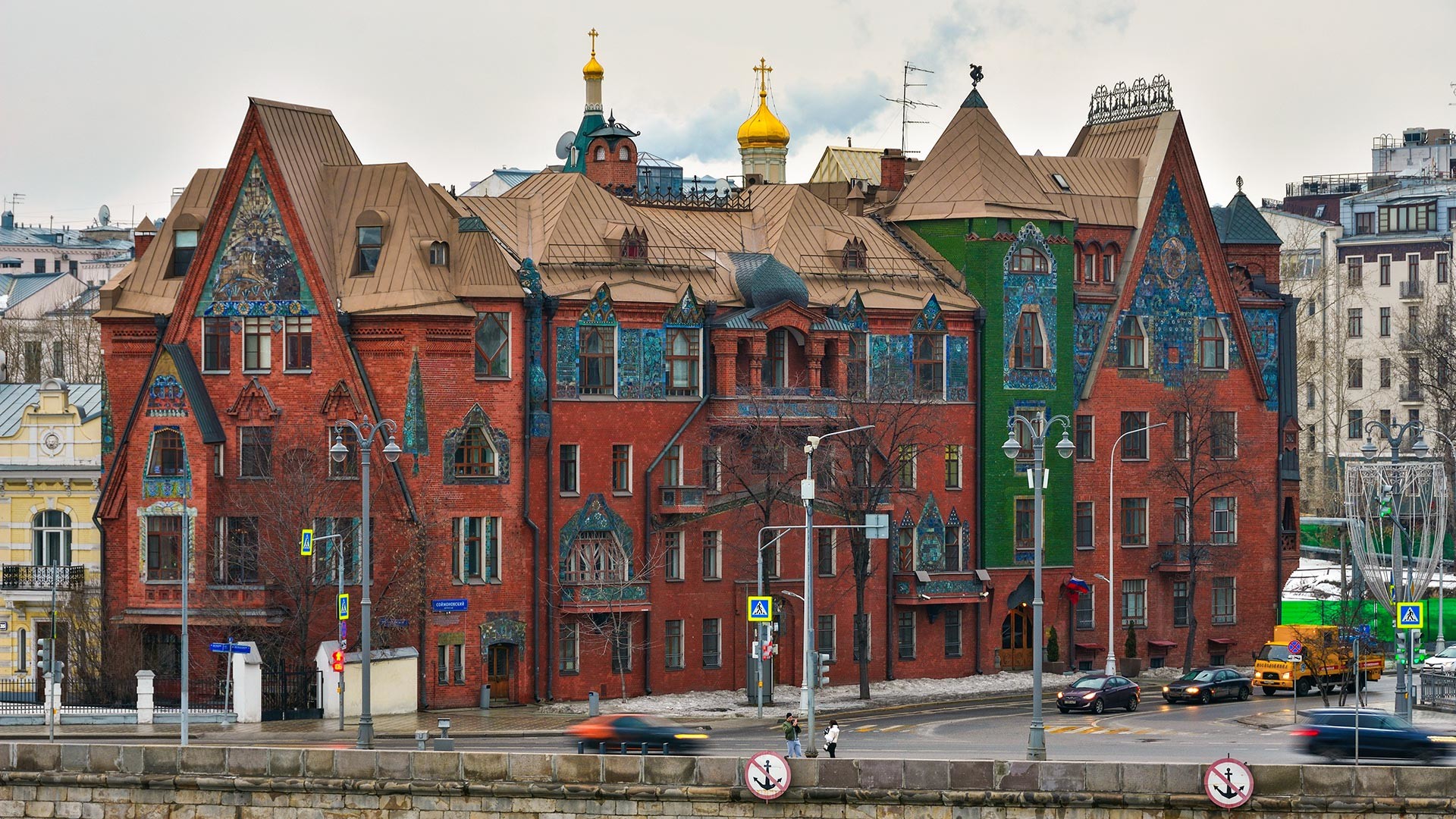 At the turn of the last century, Russia was gripped with a trend for reviving medieval Russian art and heritage sites. Artists and architects found a new appreciation for the uniqueness and artistic value of old Russian icons and architecture. They began to incorporate images and elements of Old Rus into their works, while at the same time re-imagining them. Medieval Russian art was the strongest influence on the Russian avant-garde. In architecture, the emergence of this Russian style (also referred to as the neo-Russian or pseudo-Russian style) was further bolstered by the lifting of strict regulations governing building design, as well as by several industrial exhibitions in Moscow, St. Petersburg and Paris that featured houses and interiors inspired by medieval Russian architecture. Subsequently, buildings and entire neighborhoods built according to these designs began to appear in many cities in Russia and beyond.

GUM and the Historical Museum

The Russian style consists of fashioning modern buildings on the wooden architecture of Slavic masters, sometimes deliberately exaggerating their most pronounced features. The most famous Russian style buildings in Moscow are the GUM department store in Red Square, the Yaroslavsky and Kazansky railway stations, and the Historical Museum in Manezhnaya Square. In addition, Moscow has preserved several unique mansions that look like they came right off the pages of a book of Russian folk tales. 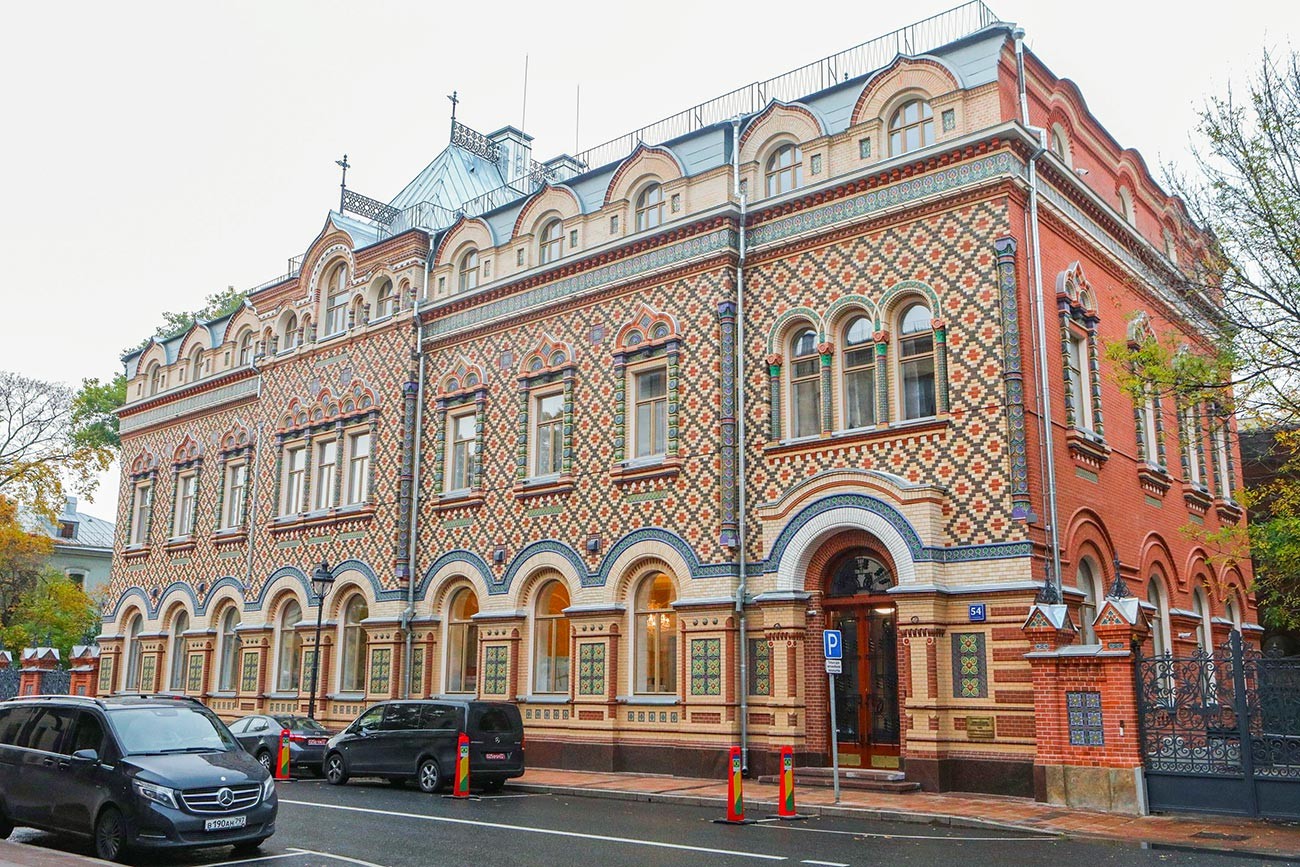 This house decorated with colorful mosaics is located in the very center of Moscow on Bolshaya Nikitskaya street. Before the Bolshevik Revolution, it belonged to Anna Lopatina, who ran a business that supplied seafood to Moscow. In addition to the owners' apartment, the building contained apartments that were rented out as well as warehouses and administrative offices on the ground floor. 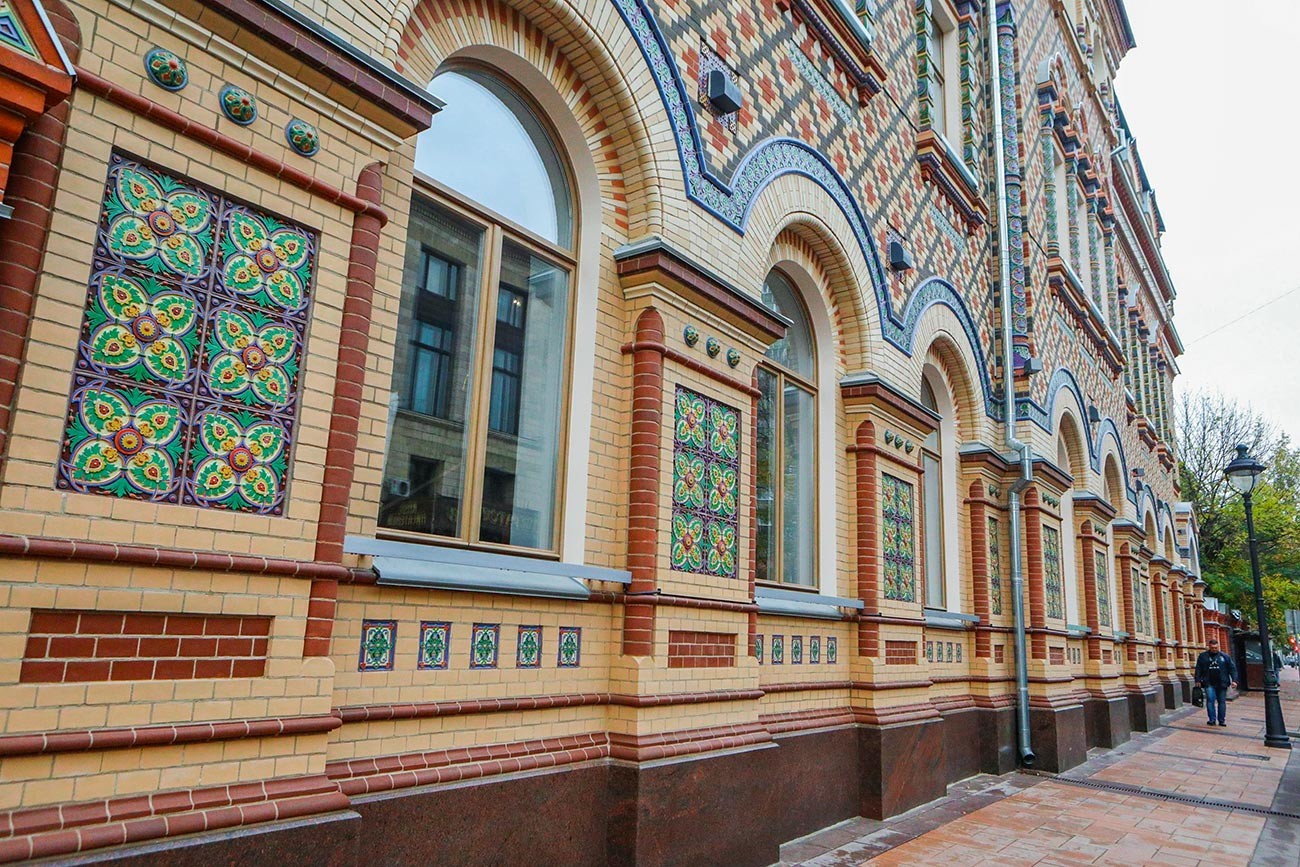 The building was designed by architect Alexander Kaminsky, the son-in-law of Pavel Tretyakov, who founded the Tretyakov Gallery—which was also built in the Russian style. Kaminsky decorated its facade with an ornament made of small multi-colored bricks and ceramics resembling cross-stitch, while the design for its arched windows was borrowed from boyar chambers. 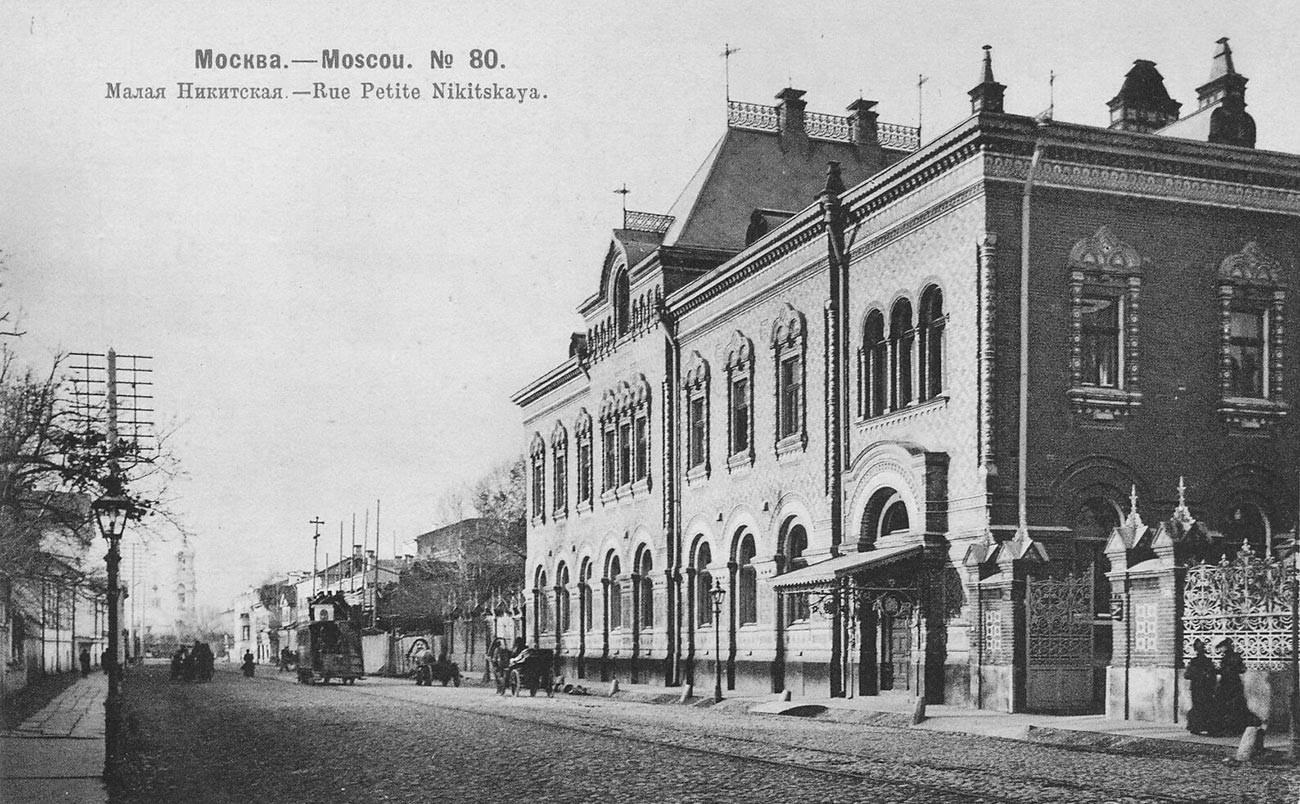 The third floor was added in the 1920s, when the mansion passed into the hands of the Soviet authorities and was turned into a residence hall. These days it houses the Brazilian Embassy. 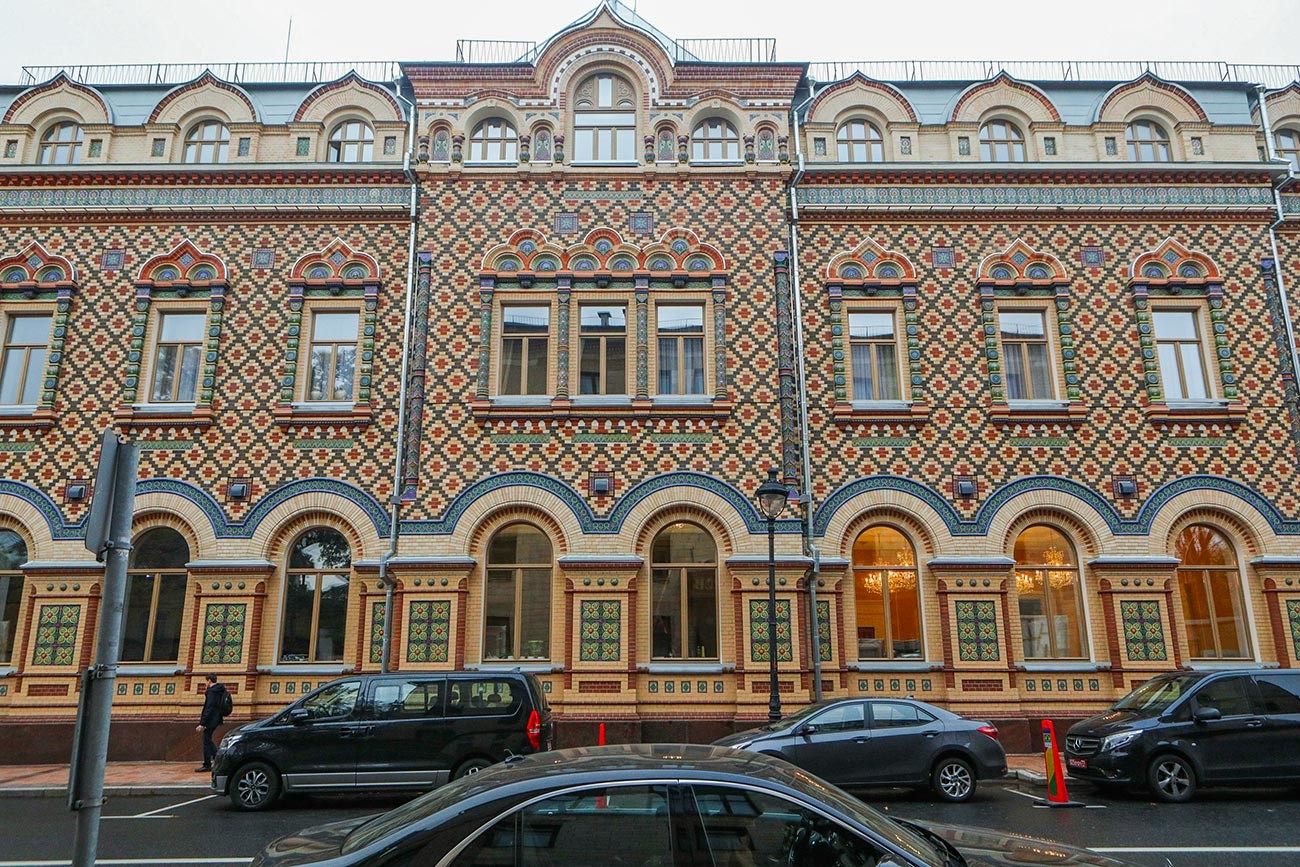 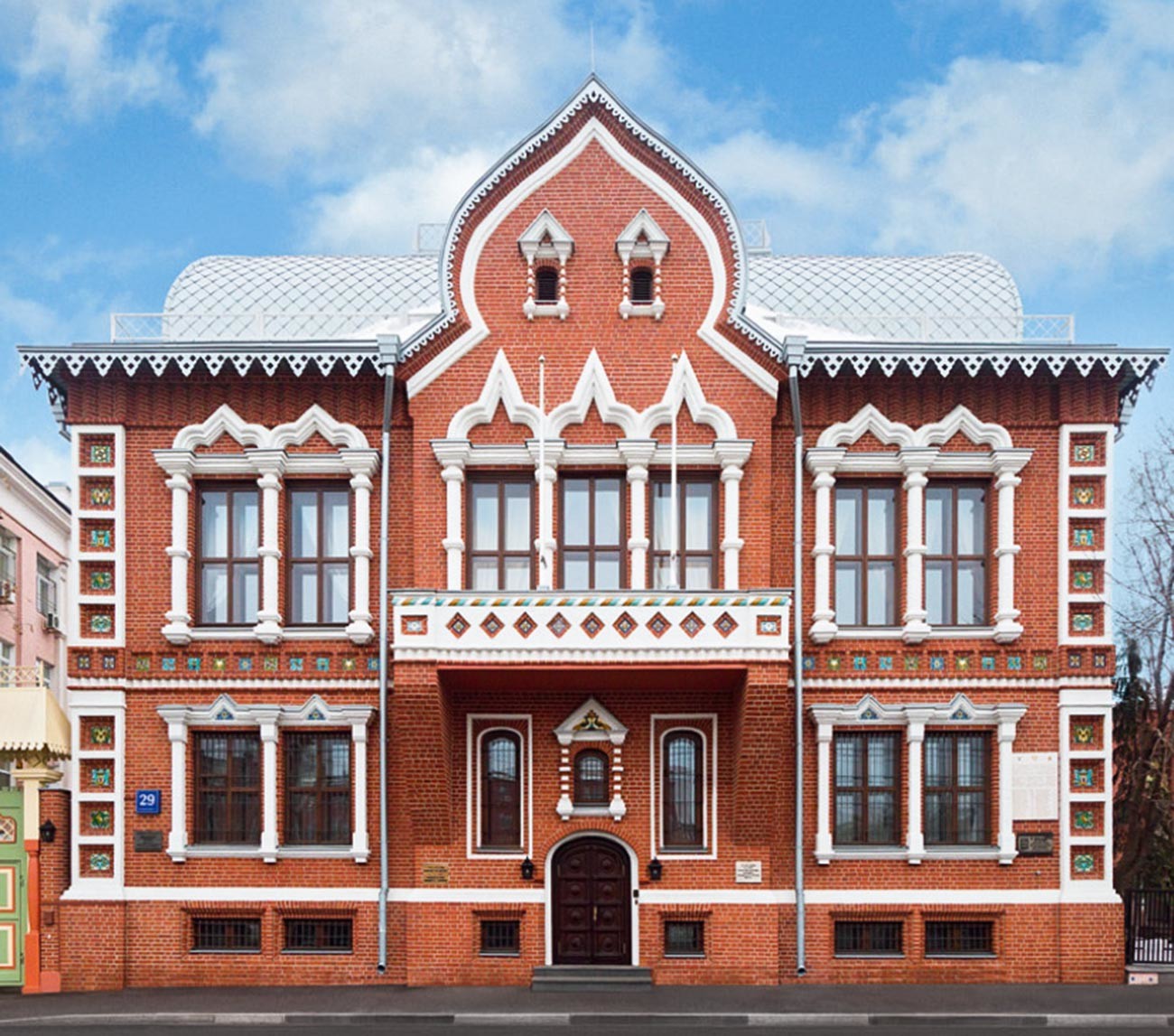 This small house on Prechistenskaya Embankment was commissioned by the art collector Ivan Tsvetkov. He was a devoted admirer of Russian art and planned this mansion as an art gallery, having hired artist Viktor Vasnetsov (author of The Bogatyrs and Alyonushka) to create its architectural design. The result was a house that was canonically “Russian” both from the outside and on the inside. 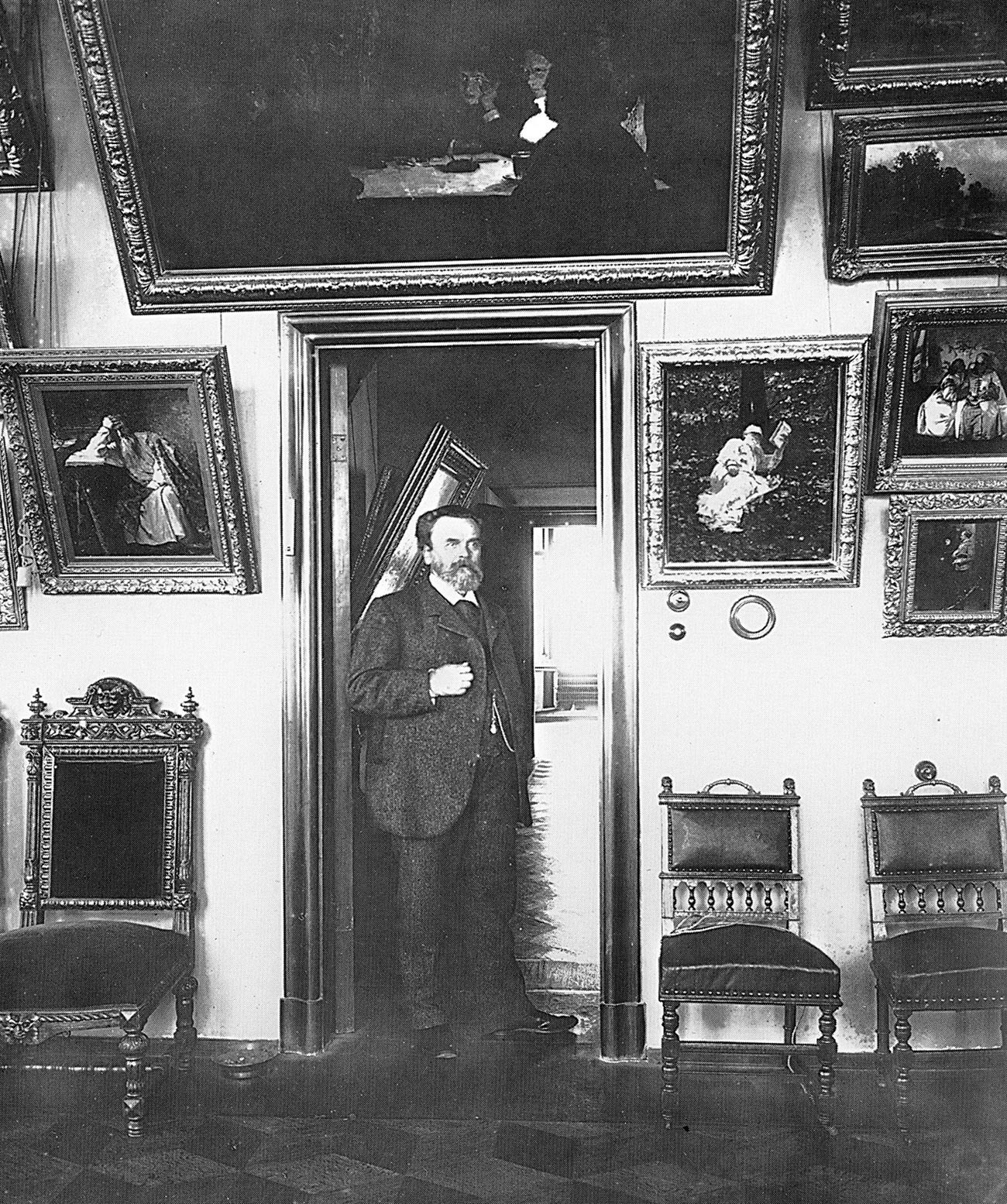 Ivan Tsvetkov in his gallery.

It features a domed roof above carved stone balconies, bright tiles on the lintels, rooms with massive censer-like chandeliers and wooden chest benches. The view from the house opened to the Krasny Oktyabr confectionery factory (which at the time was called Einem). 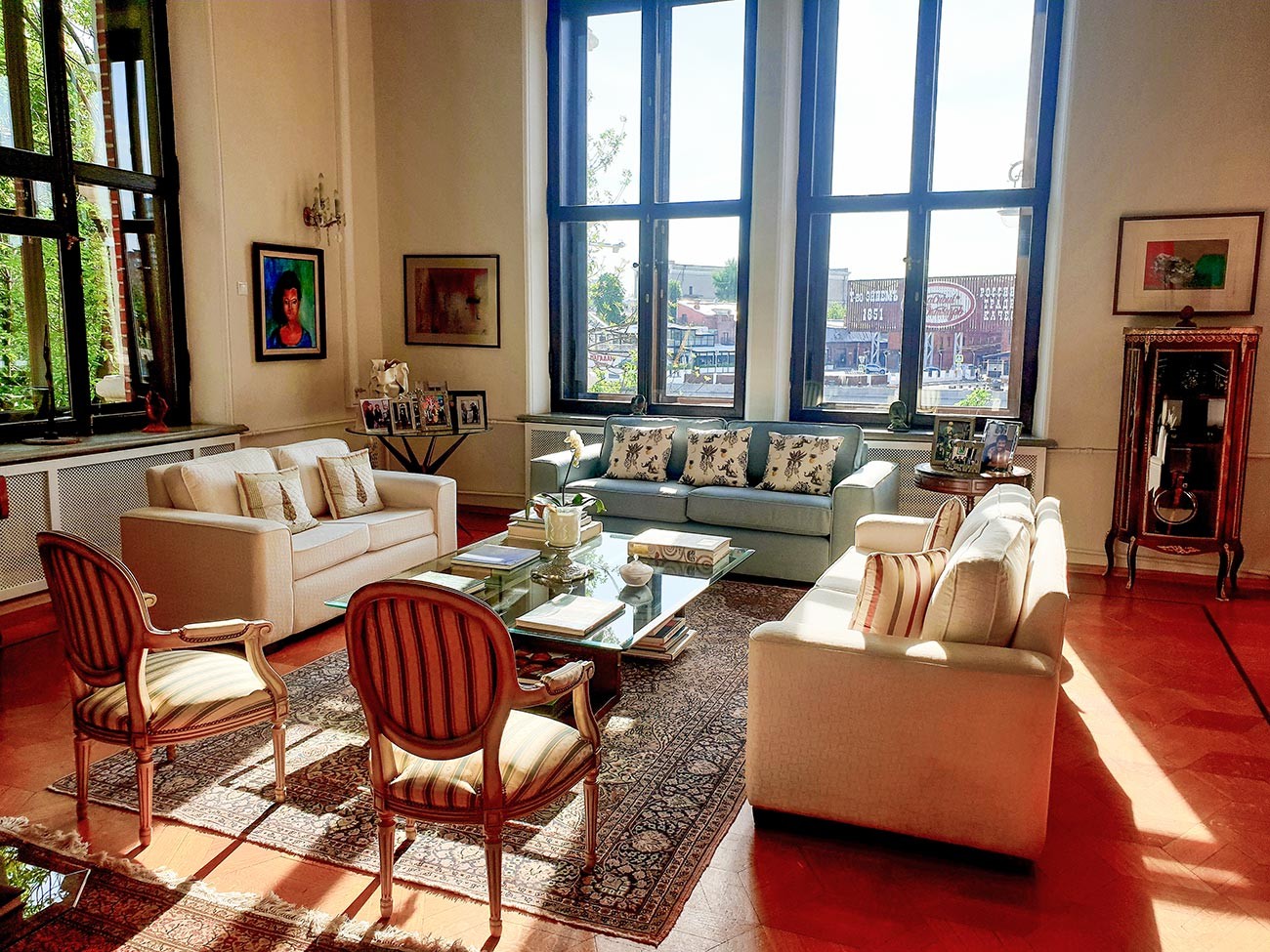 In 1909, Tsvetkov donated the house and his extensive collection of paintings (including more than 1,800 canvases and sculptures) to the city, while retaining the right to live in the house and rebuild the gallery. After his death in August 1917, the building was turned into an art museum and even served as a branch of the Tretyakov Gallery for some time. 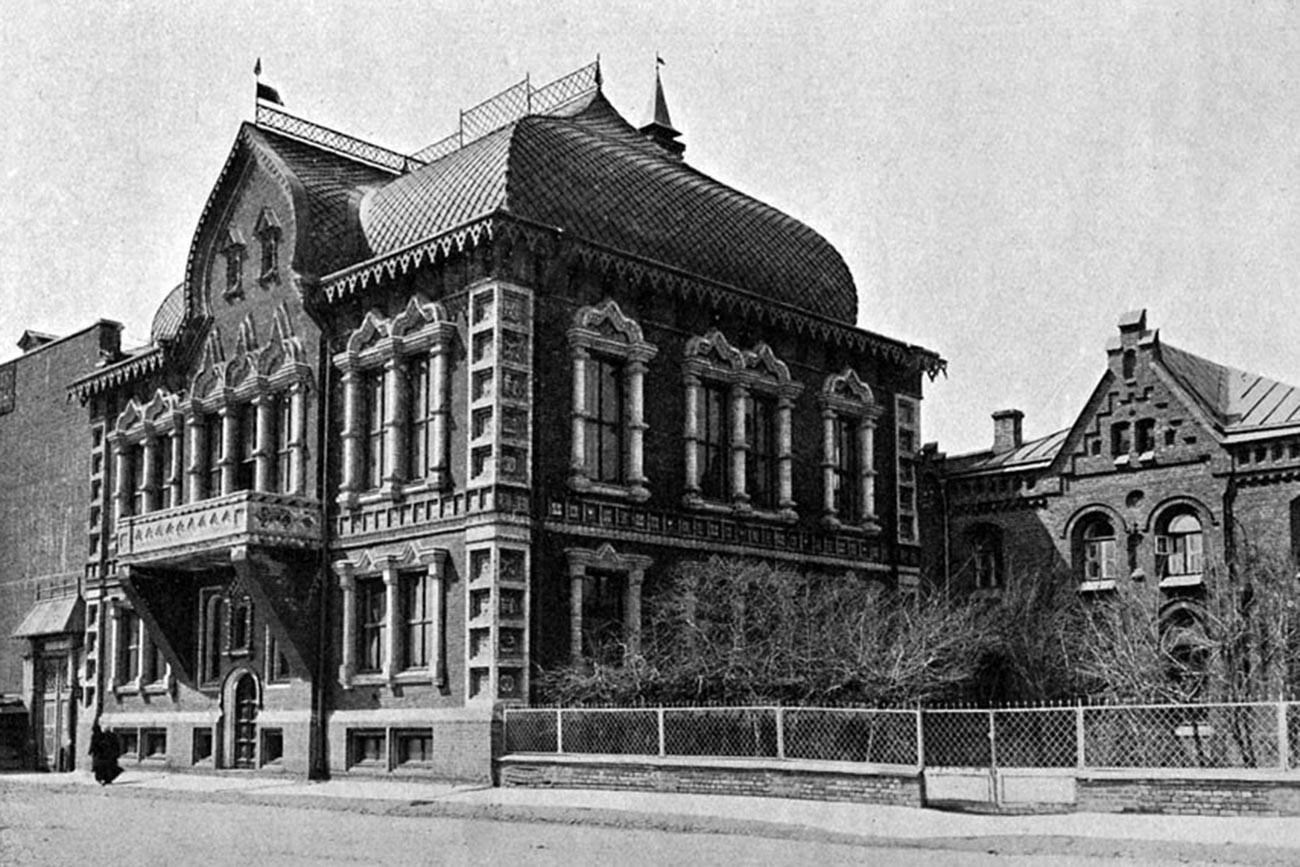 In the 1930s, however, the collection was distributed among regional museums, while the house itself was converted into a residence hall. During the war, the building was home to the headquarters of the Normandie-Niemen Fighter Regiment. Currently, it is used as a foreign diplomatic residence. 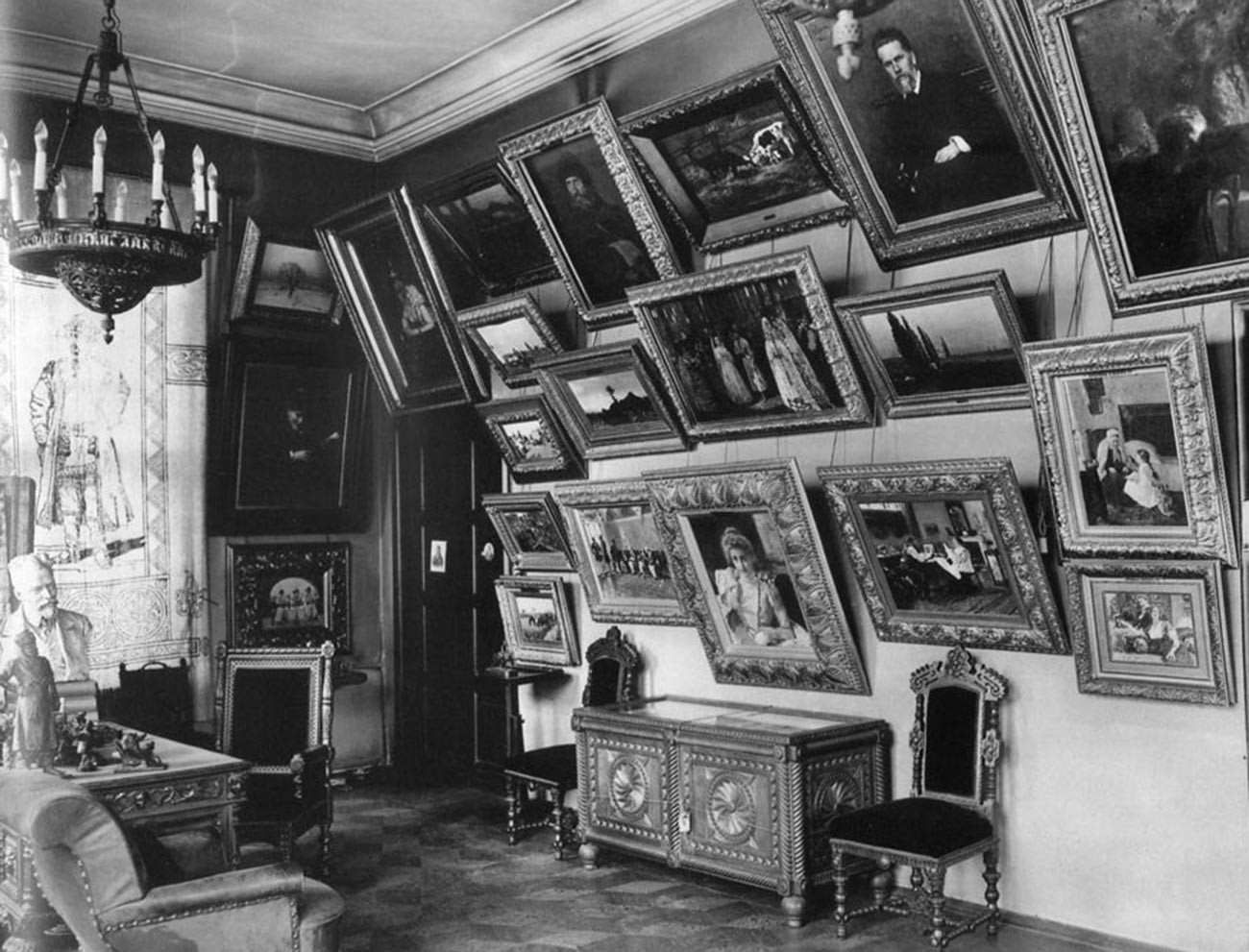 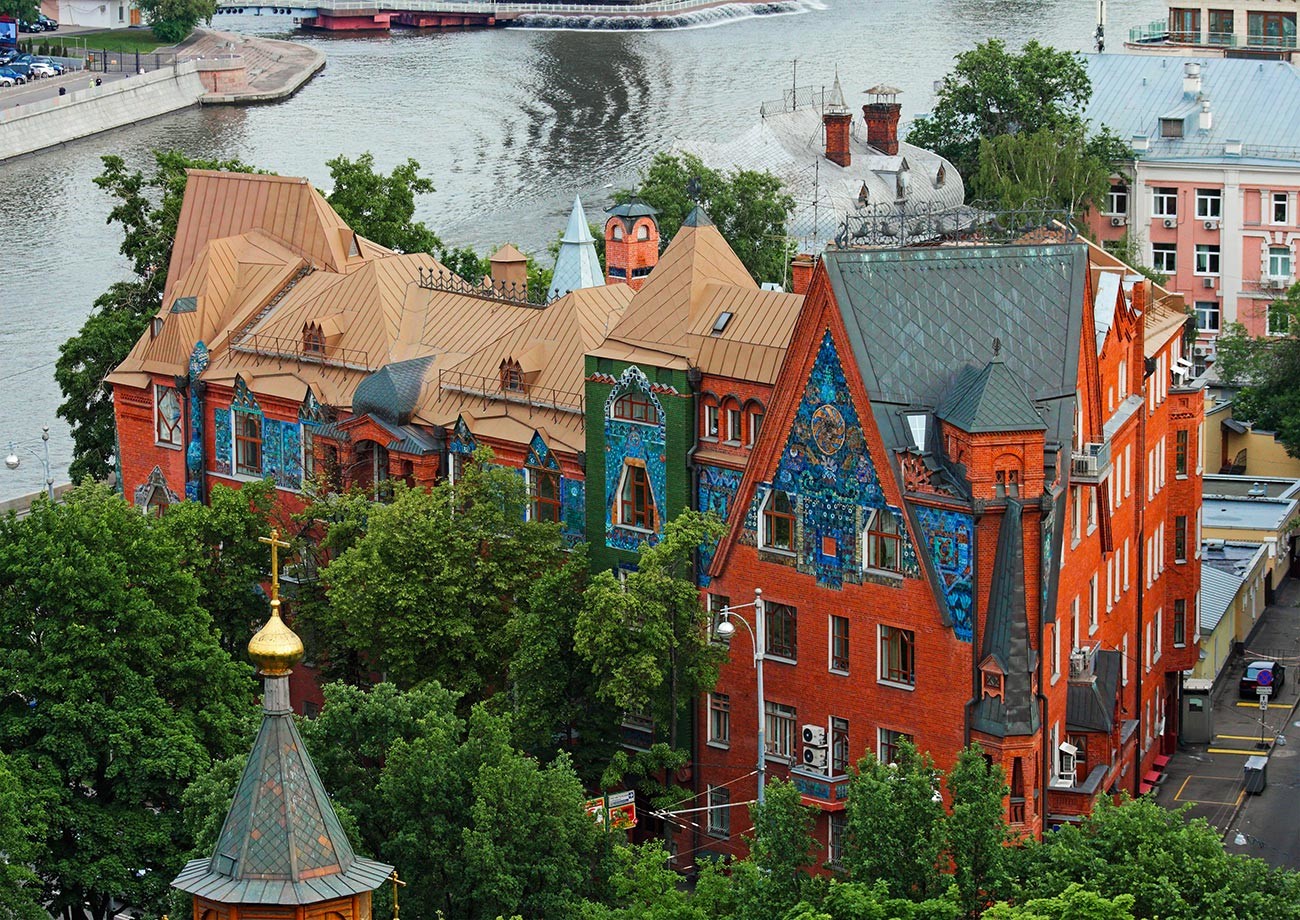 This fairy tale house on Prechistenskaya Embankment is one of the most striking buildings in Moscow. It was commissioned by a railroad engineer named Pyotr Pertsov, who registered the house in the name of his wife Zinaida. Pertsov became obsessed with the idea of building a mansion in the Russian style after visiting his friend Ivan Tsvetkov. 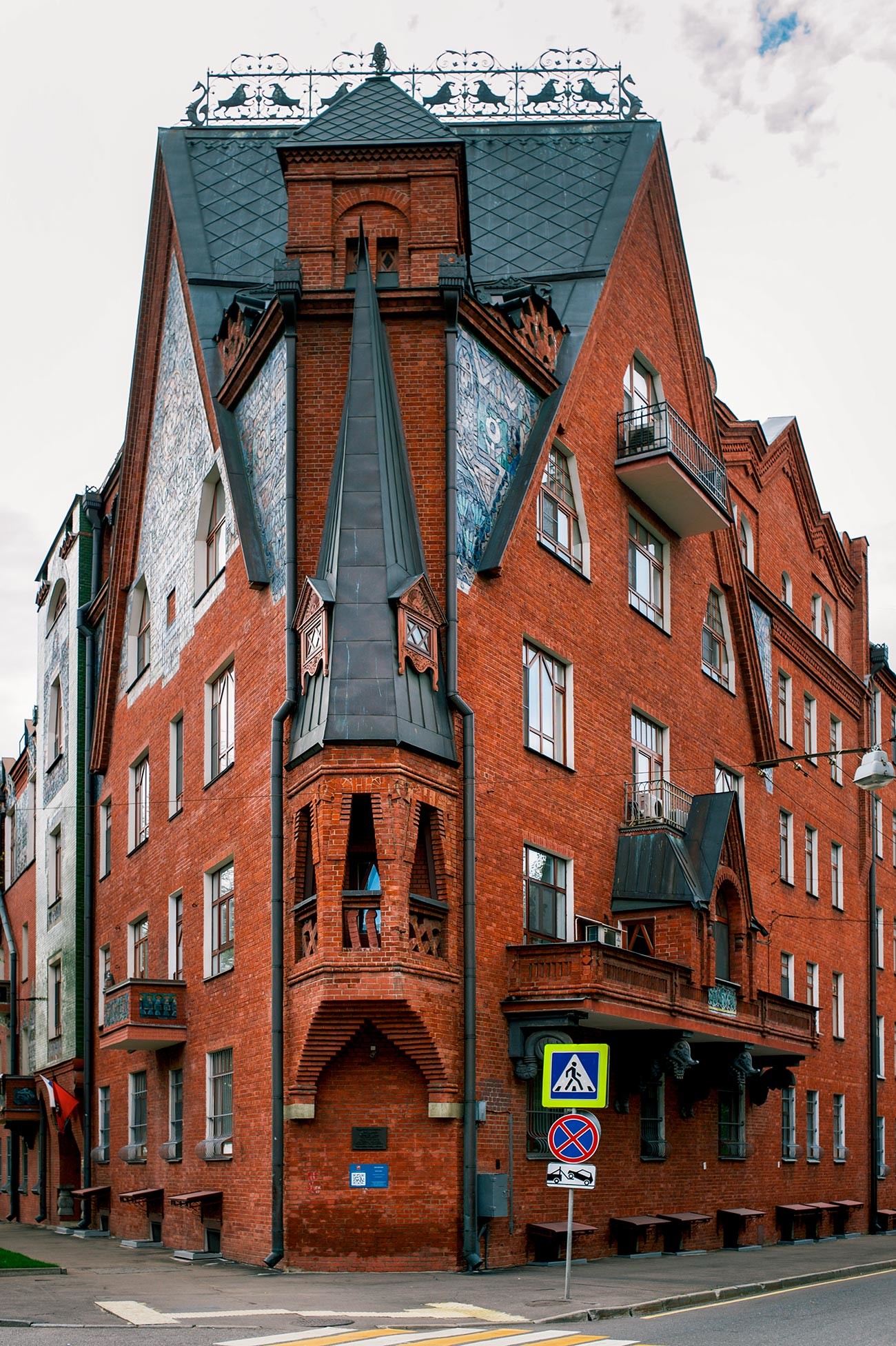 A plot of land was available nearby, and this is where Pertsov built his apartment building. A huge fan of Russian art, he planned to rent out apartments in the building to artists, writers and other members of the creative class at a very modest price. The house was designed by the architect Sergei Malyutin—designer of the famous Russian nesting doll—who deliberately included windows of different sizes and asymmetric facades. The attics housed workshops, and inside there were elevators and even a telephone. 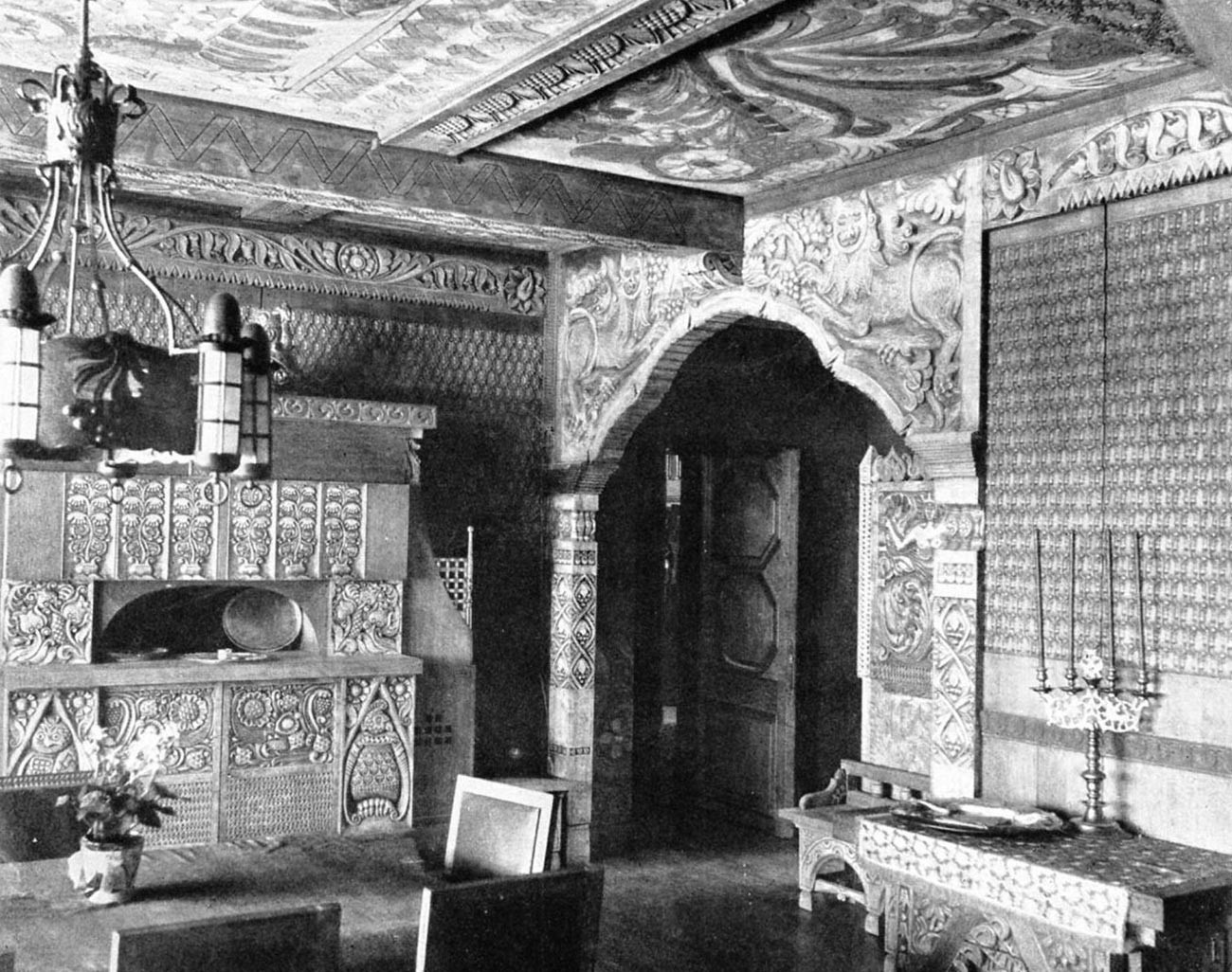 The owners' apartment occupied four floors in a separate wing and was stylized as a Russian hut, complete with tiled stoves, carved oak furniture and stained-glass windows. The house became a popular meeting place for Moscow's art scene. There was a cabaret in the basement, and passers-by would often stop outside this mansion to admire the intricate details of its facade. 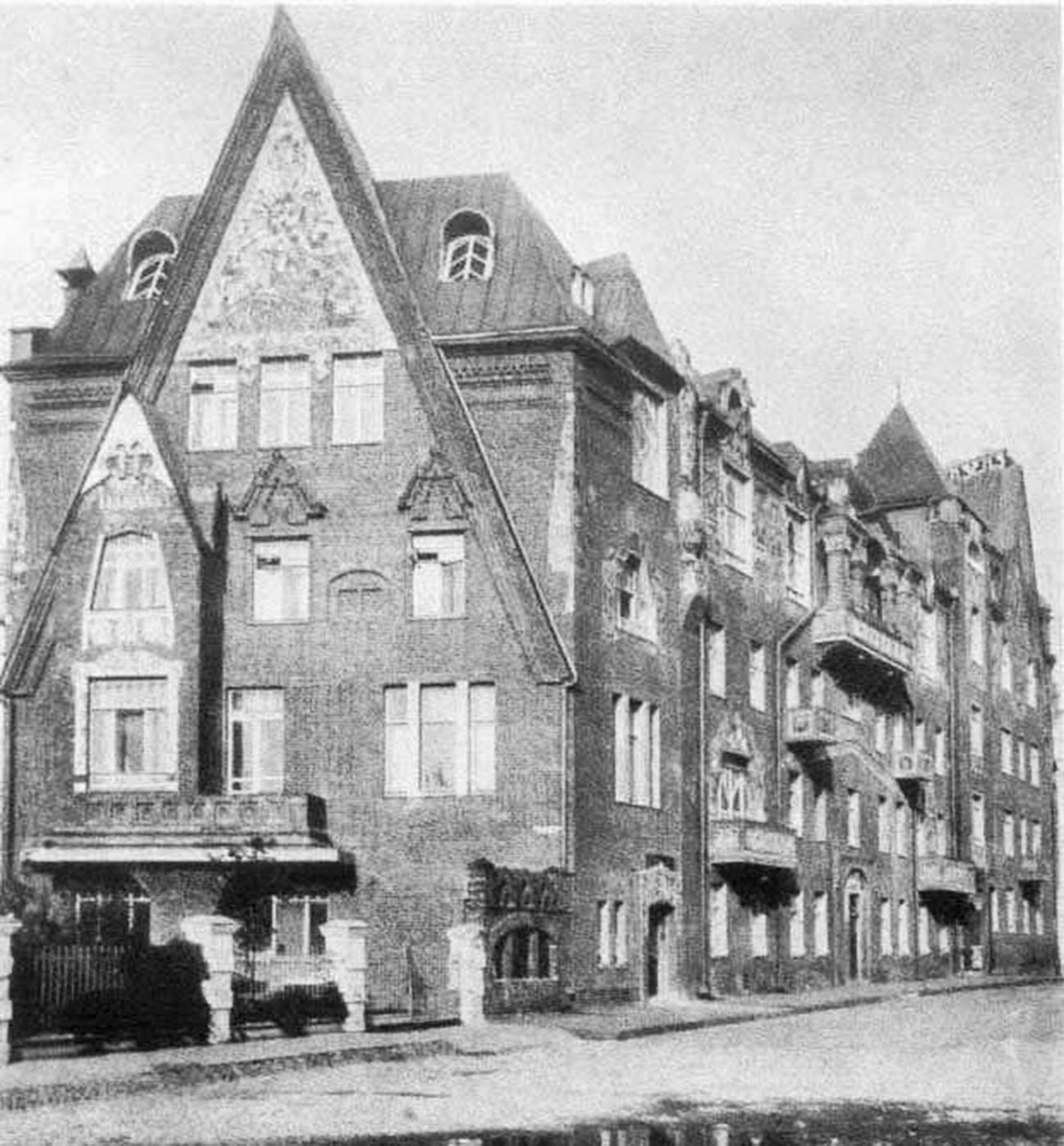 After the Bolshevik Revolution, the house was nationalized, and representatives of the new government moved in, including Leon Trotsky. Most of the original interior decoration has been lost over the years, but on the outside the building has changed very little. Since the 1970s, the mansion has been used by the Foreign Ministry. 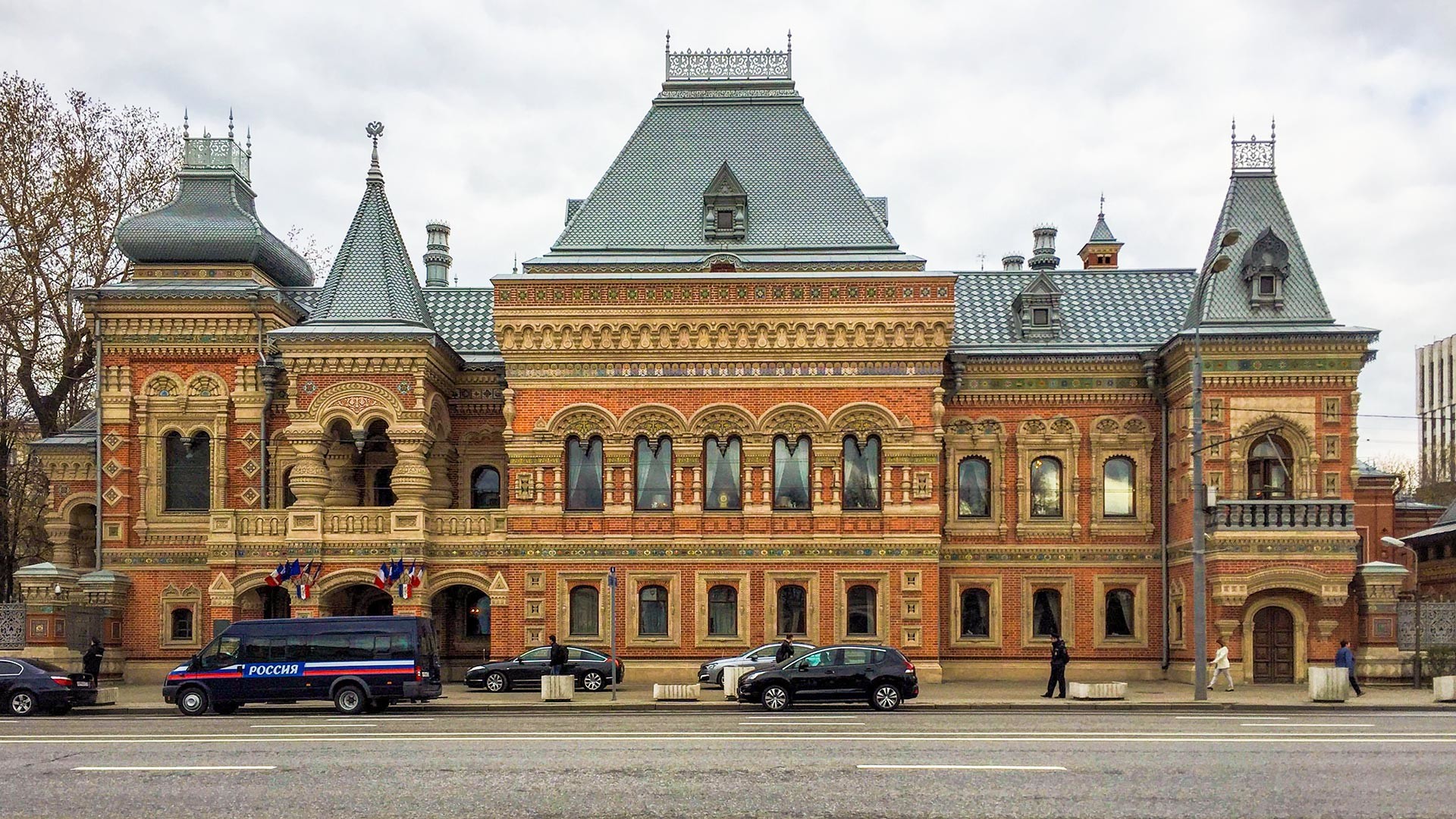 The owner of this mansion in Bolshaya Yakimanka street, Nikolai Igumnov, built it using old Russian chambers as an inspiration. Igumnov owned a gold mine and spent a million rubles on the building’s construction, which was an incredible amount at that time (the plot of land in the center of Moscow on which the house stands cost only about 17,000 rubles). 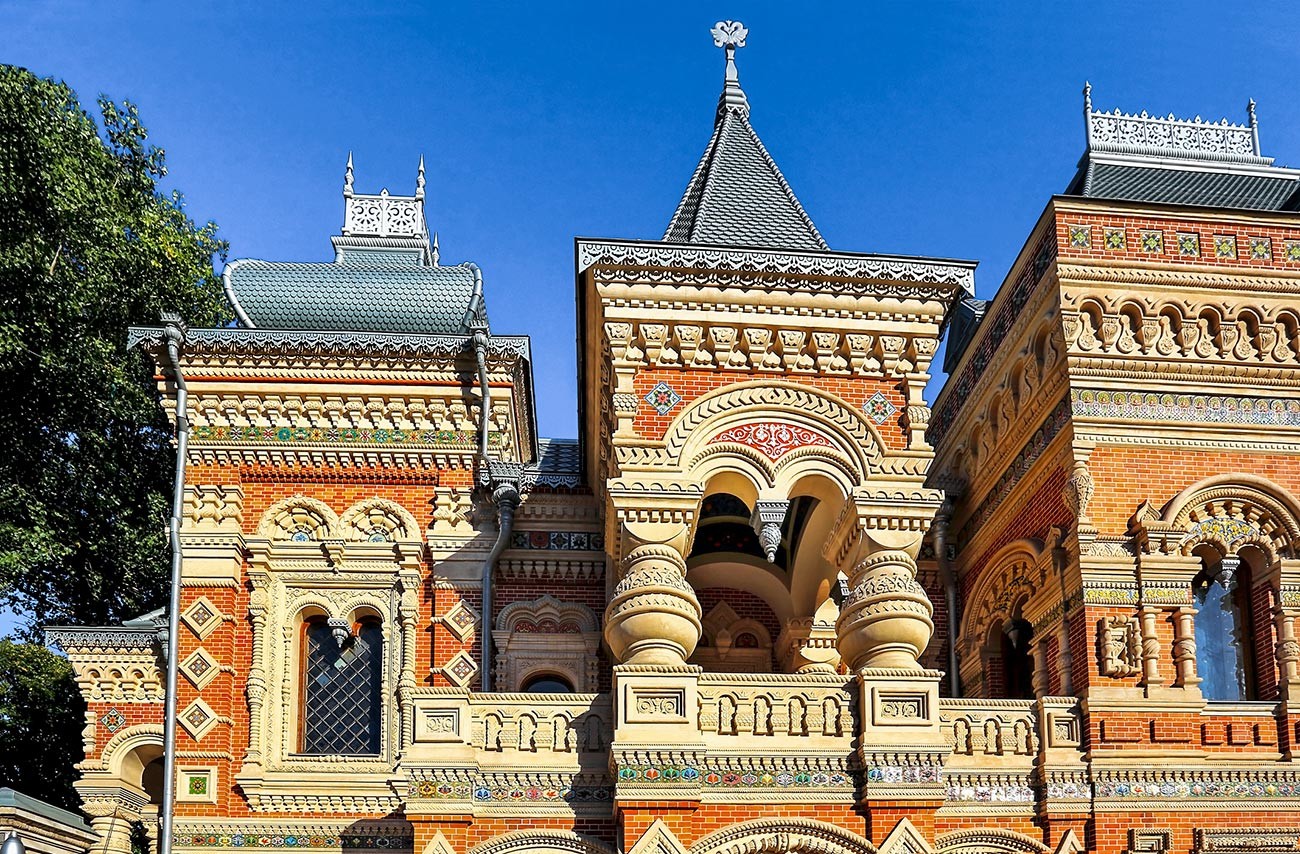 The building’s red bricks were ordered from the Netherlands, and each element of the façade—the windows, doors, balconies—has its own distinctive decor. The mosaic adorning the mansion depicts birds, flowers and plants from fairy tales. The building’s roof was made in different shapes. 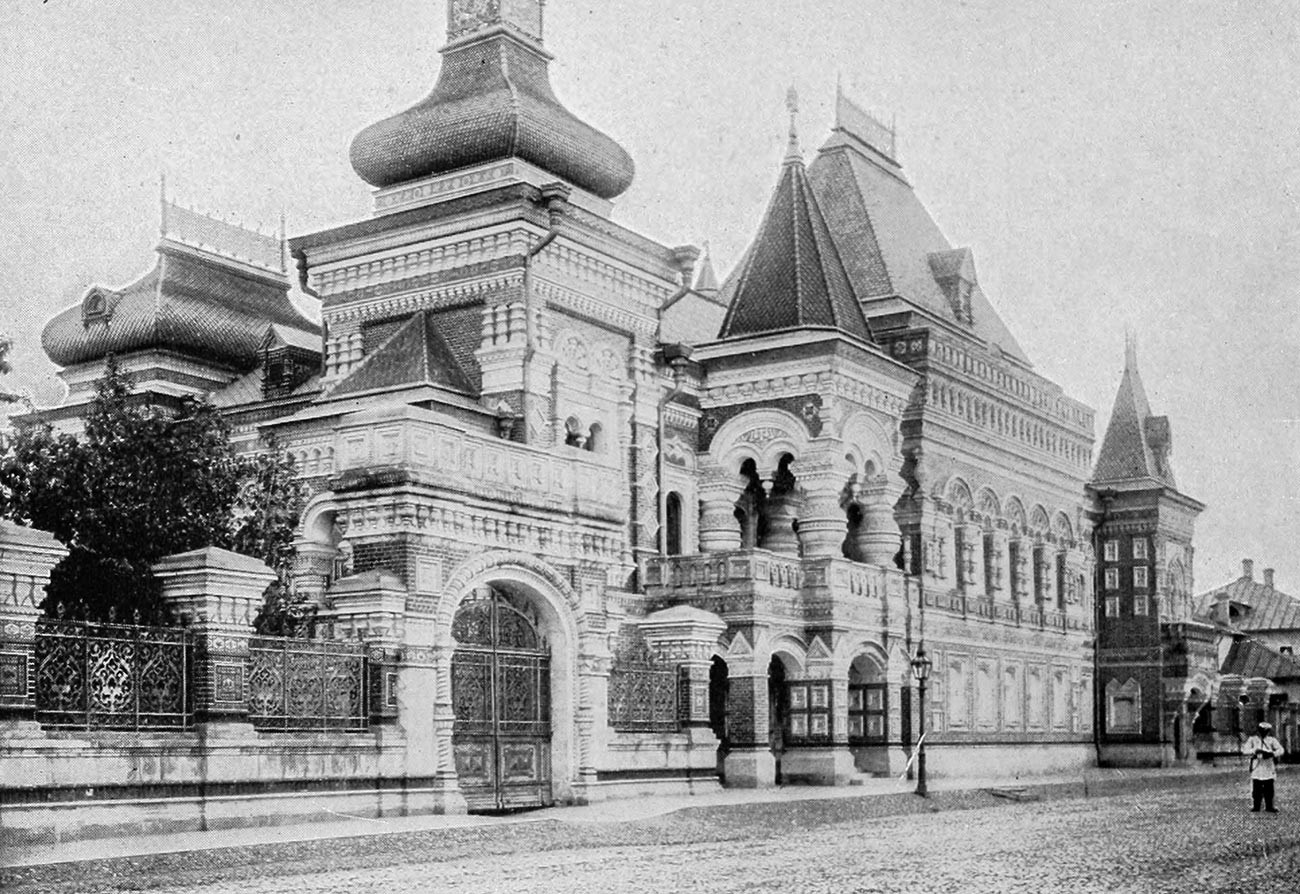 In 1901, Igumnov left for Abkhazia and never returned to Moscow. After the revolution, he voluntarily handed over the property to the Soviet government. Nowadays, the building houses the residence of the French ambassador. 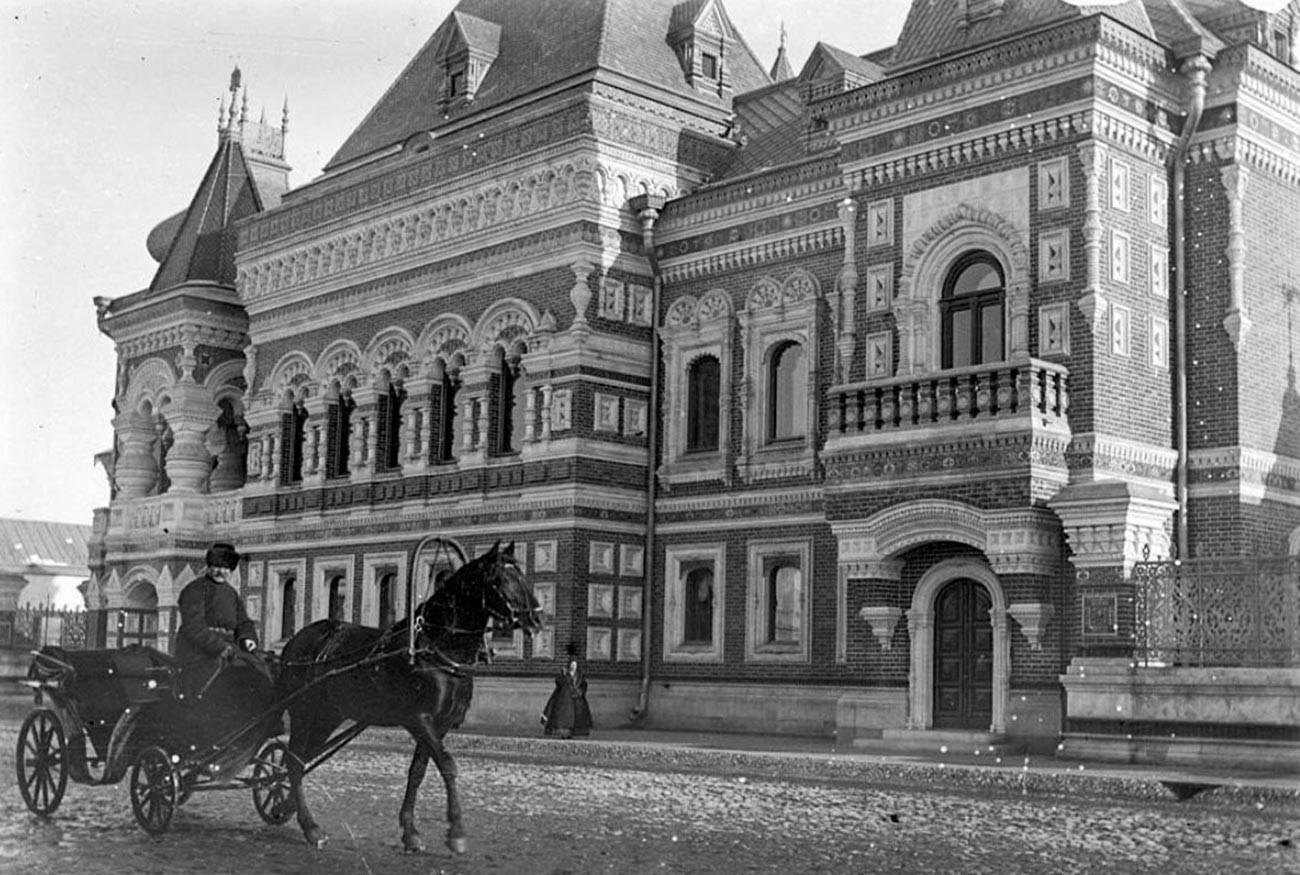 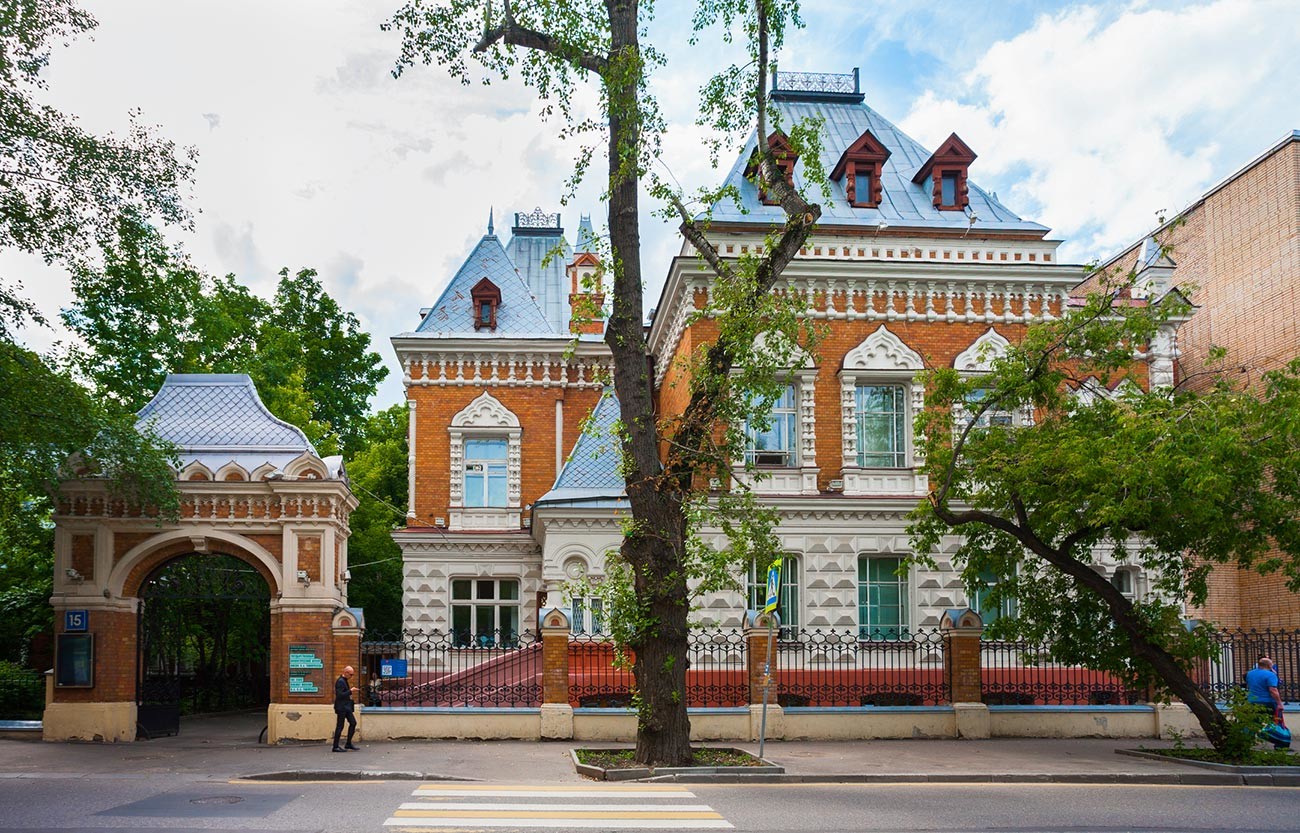 This huge house on Malaya Gruzinskaya street belonged to the merchant and philanthropist Pyotr Shchukin, who was an avid collector of Old Russian art. As his collection grew, he decided to build a separate building for it in the Russian style, which was fashionable at the time. 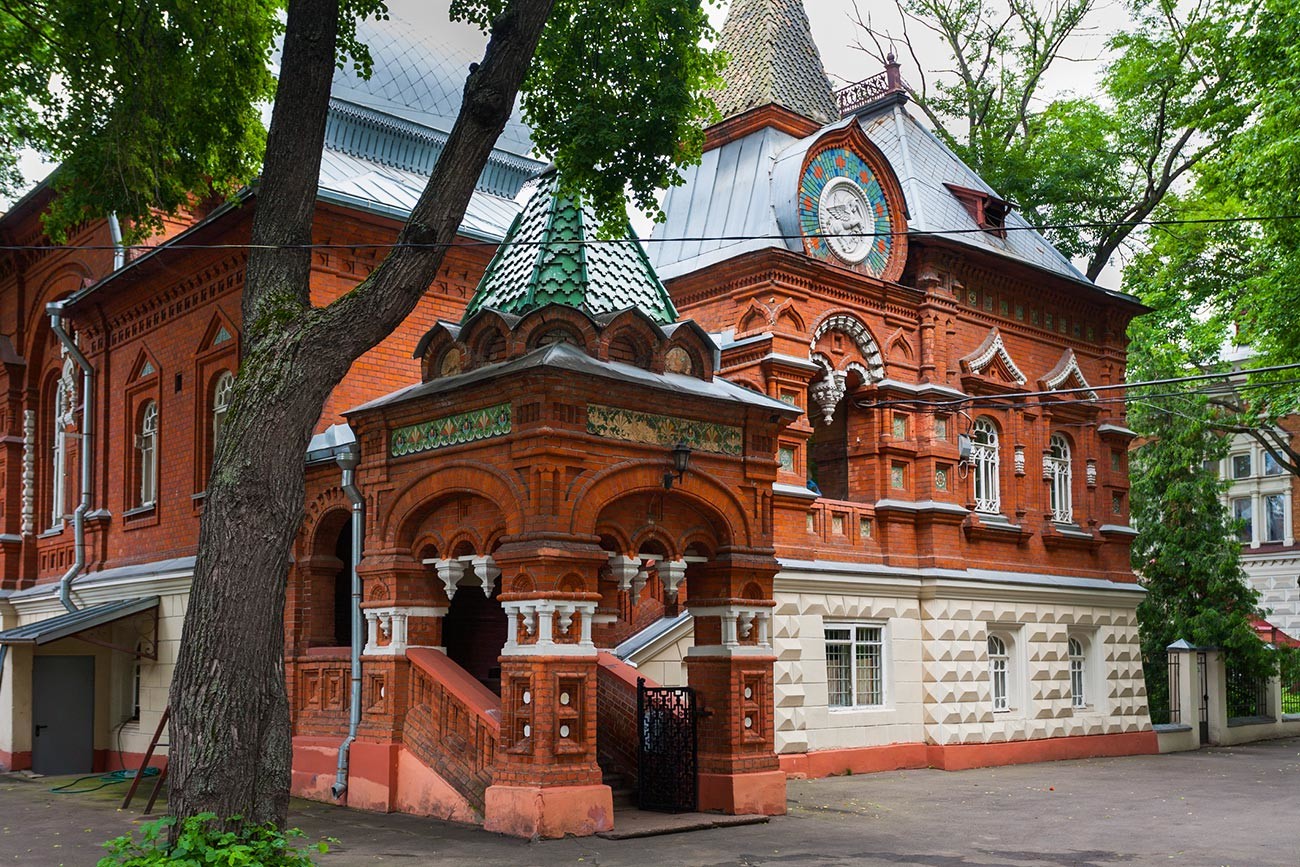 The main building had a wide porch decorated with a balcony (a smaller copy of the balcony of the Romanovs' chambers on Varvarka street) and multi-level pointed roofs. Inside, visitors found themselves in vaulted halls painted with floral designs. Several years later, another building was built next to the first one, also in the pseudo-Russian style but more spacious. Later, the two houses were connected by an underground passage. 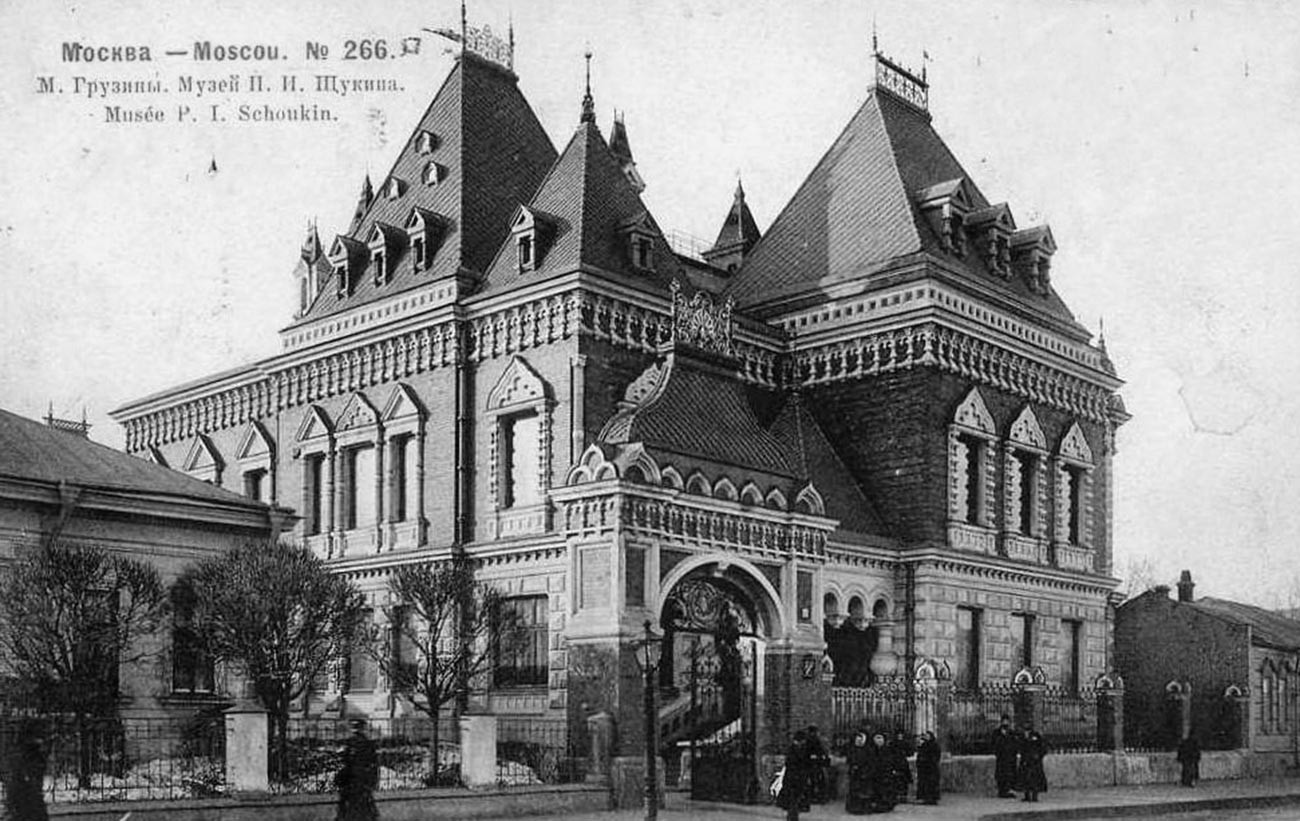 In 1905, Shchukin donated his house to the Historical Museum but remained the curator of the collection until his death and even gave guided tours of the house himself. During the Soviet years, the building continued to be used as originally intended, exhibiting items from various museums. Today it houses the Timiryazev Biology Museum. 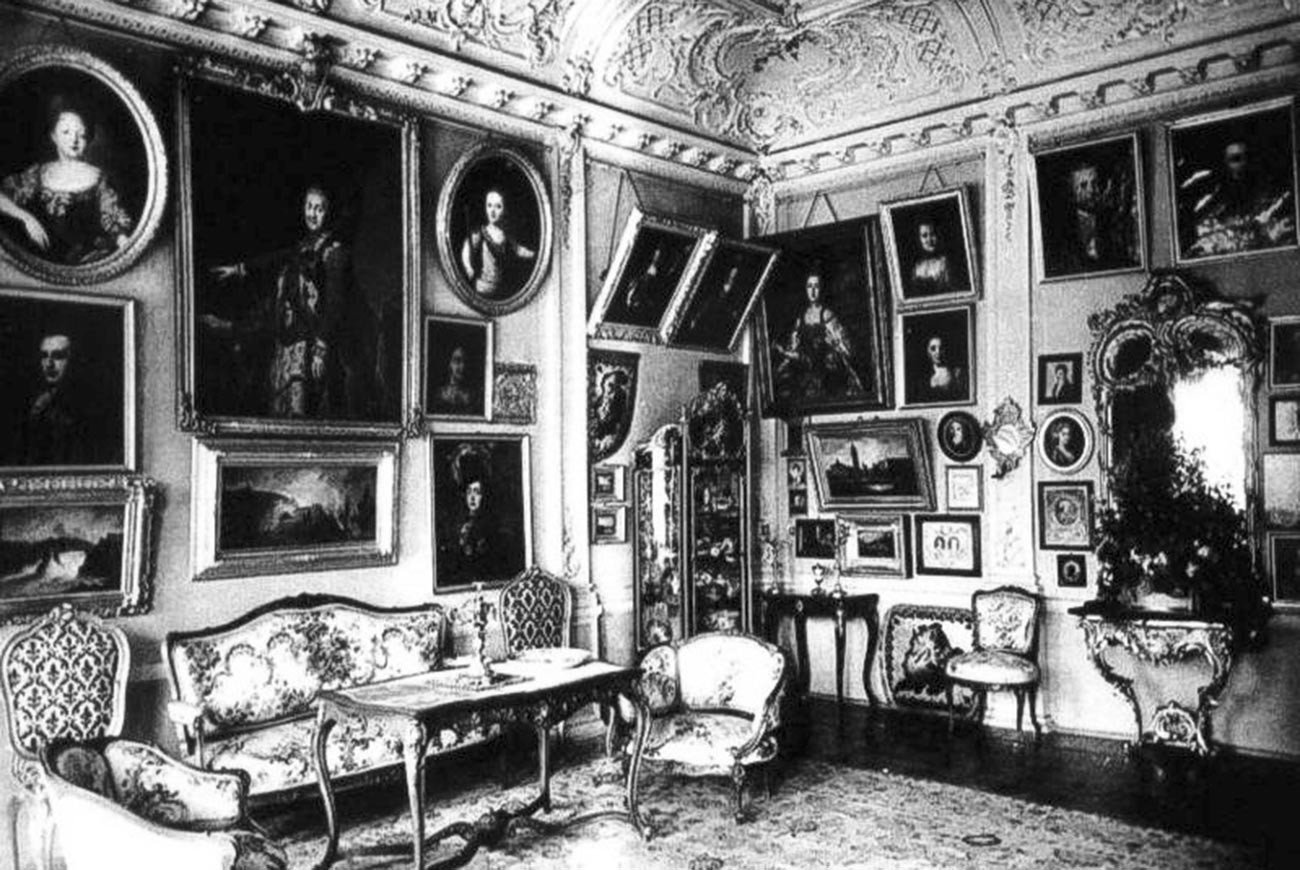