The Tolg Monastery: Inspiration on the Volga River 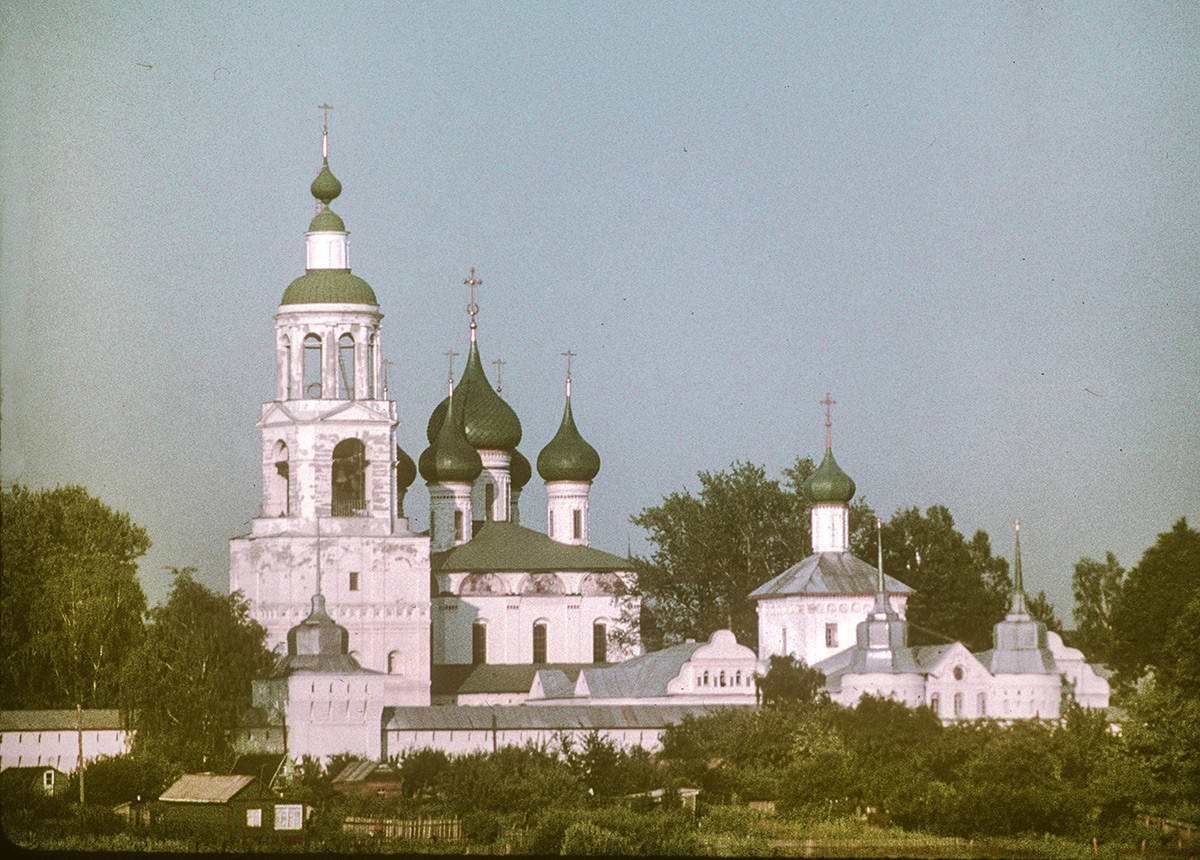 On the approach to Yaroslavl, a short distance upriver on the left bank of the Volga is one of Russia’s most venerated monastic institutions, dedicated both to the feast day of the Presentation of the Virgin Mary in the Temple and to the miraculous Tolg Icon of the Virgin. In the summer of 1910, it was a destination for Russian photographer and chemist Sergei Prokudin-Gorsky during his travels in the region. 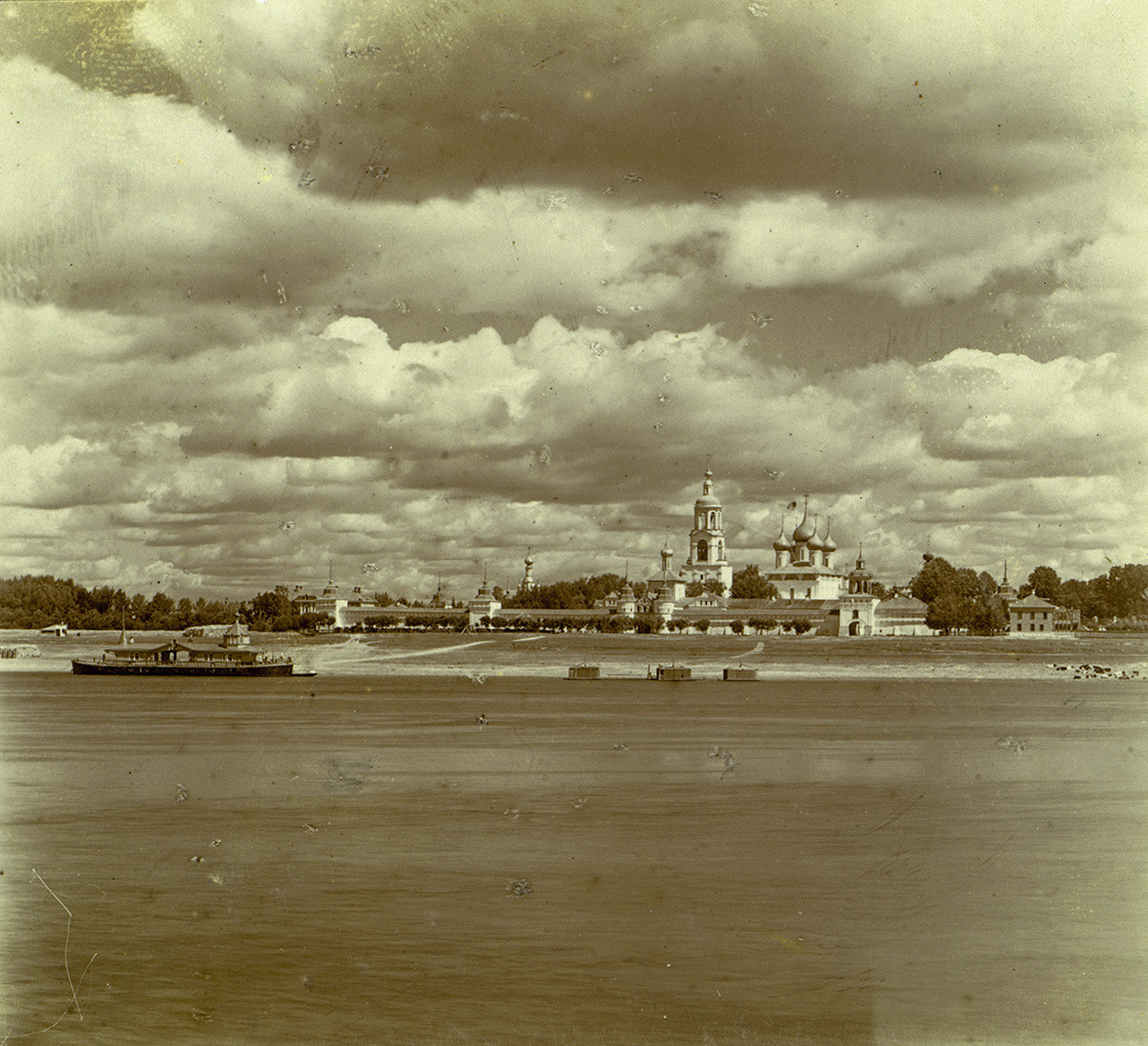 Unfortunately, the original glass negatives of these photographs are not present in the Library of Congress collection of his work. It is likely that they were destroyed or lost during the mysterious movements of the collection until its arrival at the library. There are, however, contact prints made by Prokudin-Gorsky from the magenta exposure of the original three-exposure negative. These monochrome images provide invaluable information about the monastery before the turbulence of war and revolution in the 20th century. My work there occurred over a period of five visits from 1992 to 1997 as the monastery (now a convent) was undergoing a massive restoration. 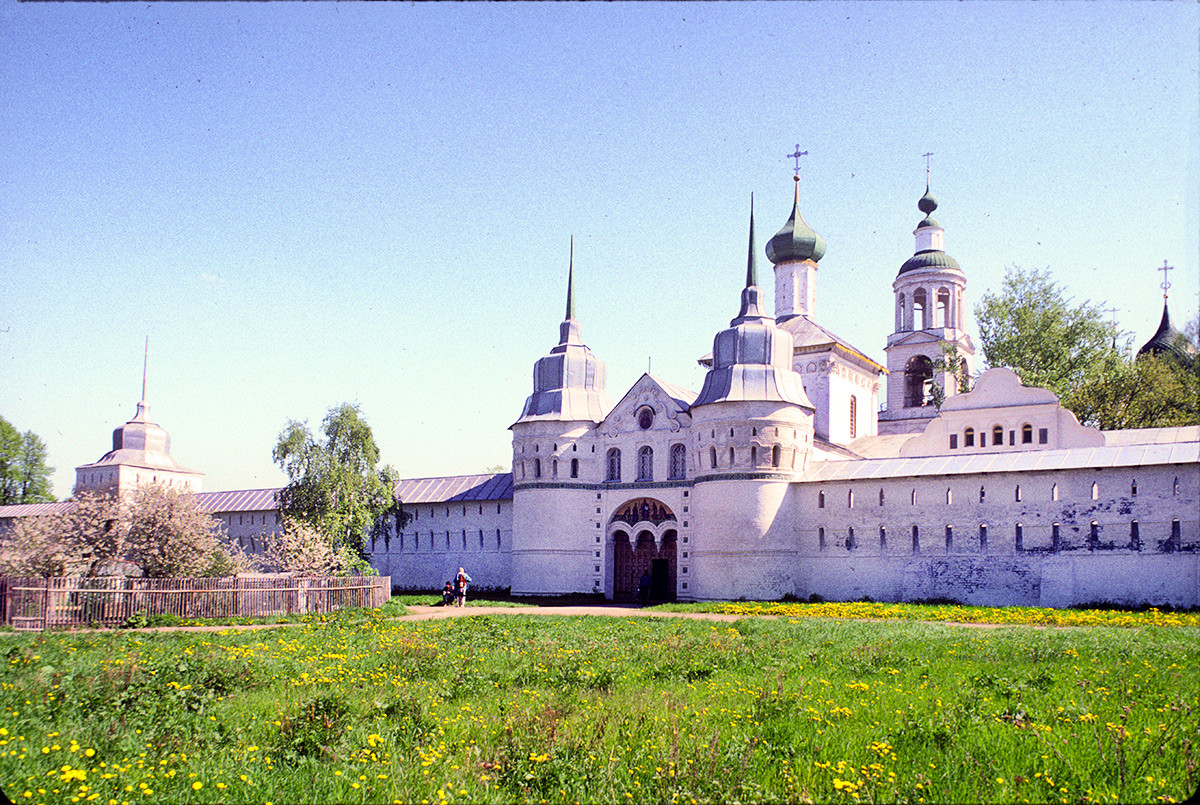 Situated near the confluence of the small Tolga (or Tolgobolka) River with the Volga, the Tolg Monastery benefited greatly from its location near Yaroslavl, one of medieval Russia’s richest cultural and spiritual centers. I have devoted several articles in my “Discovering Russia” series to the city’s rich architectural heritage.

Founded in the early 11th century by Yaroslav the Wise, Grand Prince of Kiev, Yaroslavl had masonry churches within monasteries by the early 13th century. In 1238, Yaroslavl was sacked by the Mongols during their conquest of central Russia. Although recovery from Mongol dominance was slow, union with Muscovy in the 15th century integrated the town into a larger political and economic structure. 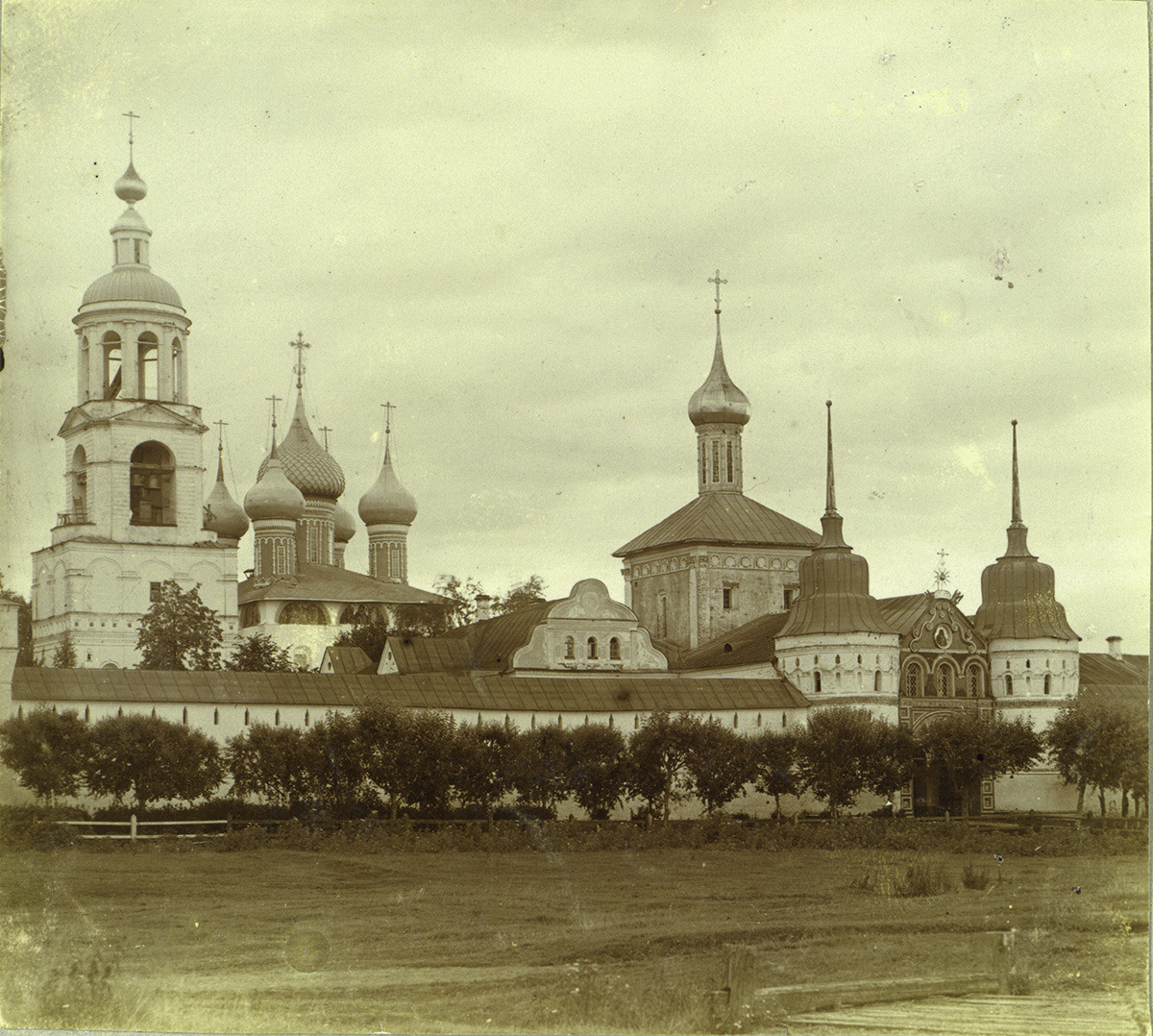 Yaroslavl served as a center not only for trade within the extensive Volga River basin but also for the entirety of the Russian north. In the latter part of the 16th century, Ivan the Terrible established a port at the Archangel Monastery on the Northern Dvina River near the White Sea and thus opened Moscow for commerce with western Europe.

This in turn enhanced Yaroslavl’s strategic position within a mercantile network that stretched from the White Sea to Siberia, with the Volga River as the central conduit. Buoyed by new trading possibilities, Yaroslavl attracted colonies of Russian and foreign merchants – English, Dutch, and German. Much of this commerce passed in front of the Tolg Monastery on its way along the Volga. 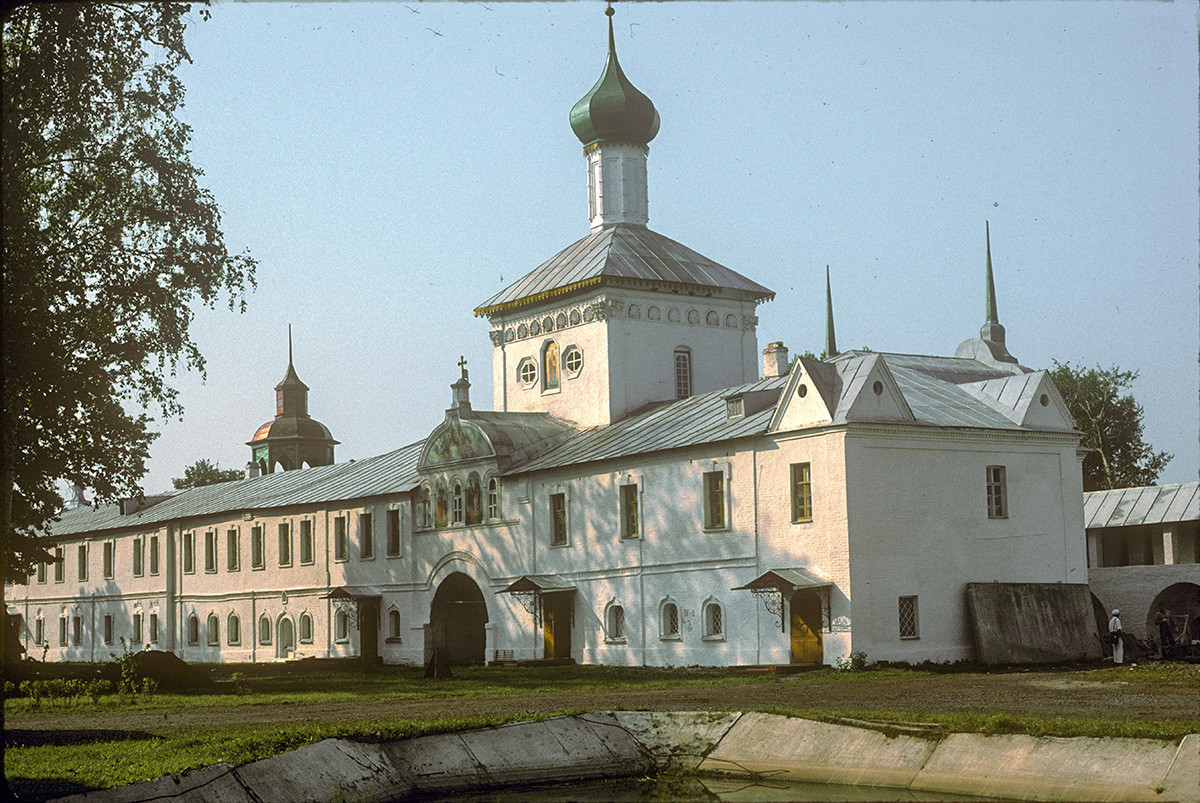 Although spared the worst of the disorder inflicted on Russia in the latter part of Ivan the Terrible's reign, the commerce of Yaroslavl declined during the interregnum following the death of Boris Godunov in 1605. Known as the Time of Troubles, this period saw much of the country plunged into devastating political and social chaos with the Muscovite throne claimed by various figures, including a Polish candidate. As part of the widespread pillaging of central Russia, Polish forces descended on the Yaroslavl area in 1608-09. The town citadel withstood a siege, and in 1612, Yaroslavl became a center for rallying national resistance against a Polish occupying army in Moscow.

The participation of Yaroslavl's merchants in this campaign brought them trading privileges from the government of the new ruler, Mikhail Fyodorovich, the first tsar of the Romanov dynasty. Consequently, during the 17th century, Yaroslavl accumulated the wealth necessary to build elaborately decorated churches, including three shrines at the Tolg Monastery.

The ancient site of veneration 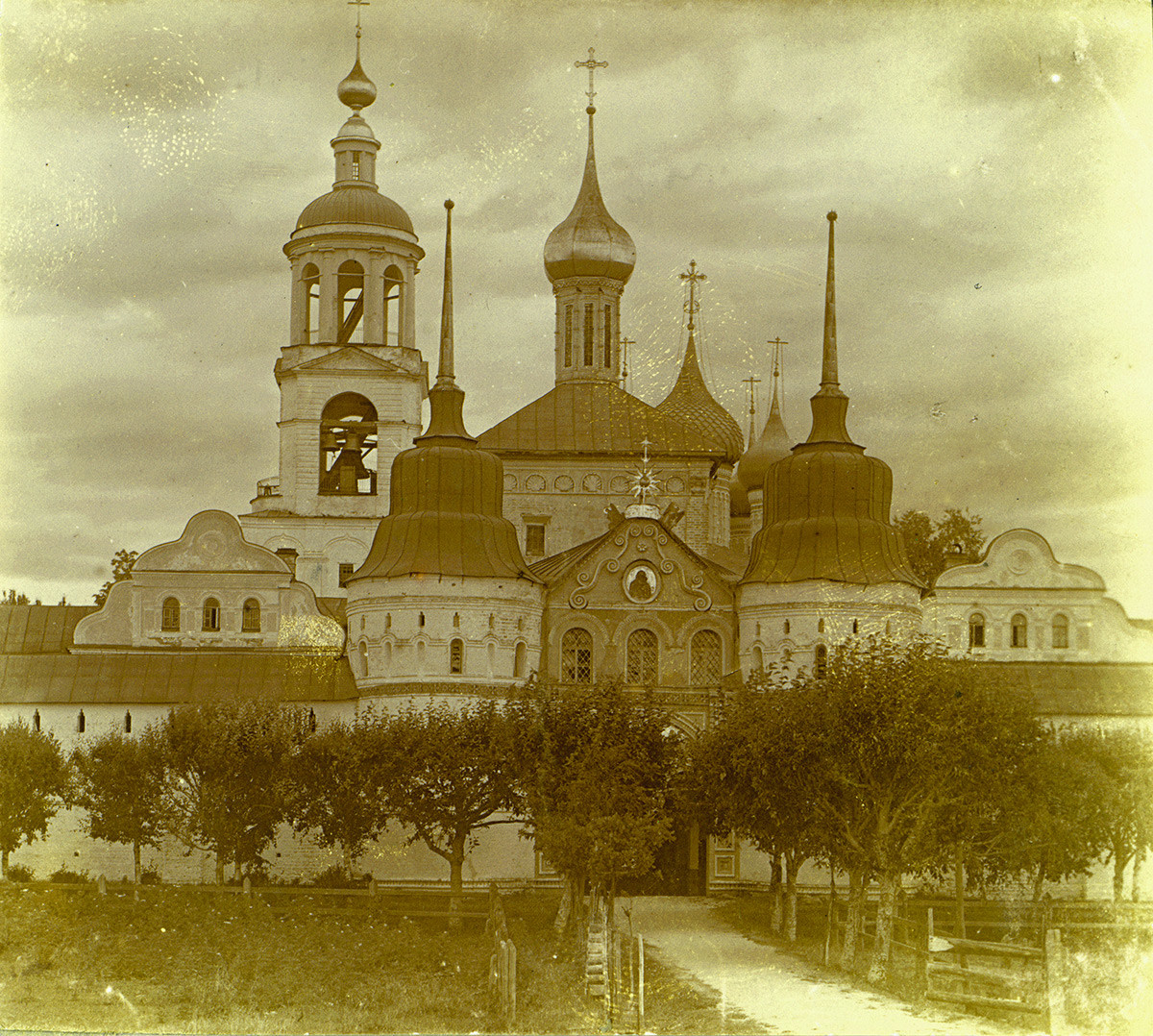 According to a church account originating in the 16th century, the monastery was founded in August 1314 on the site of the miraculous appearance of an icon of Mary and the Christ Child to the venerable Prokhor, Bishop of Rostov (also called by his monastic name, Trifon). The Tolg Icon – one of the most widely venerated in Russia –belongs to a group of Byzantine “Tenderness” icons, in which the faces of Mary and the Infant touch. 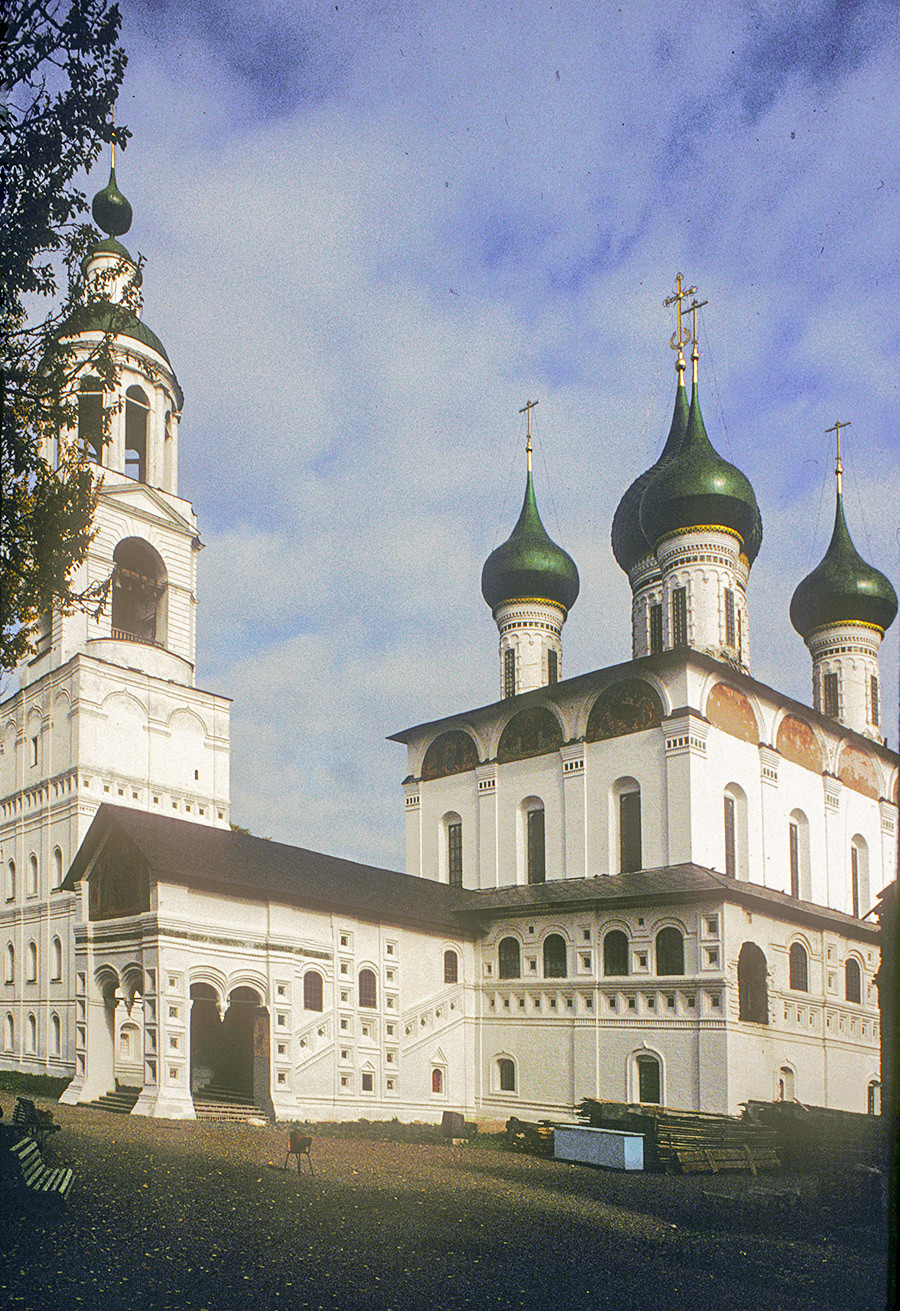 Bishop Prokhor was an important figure in the early history of the Russian Orthodox Church and supported the growing role of Moscow as a center of church authority. At his behest, a log church dedicated to the Presentation of the Virgin was quickly erected at the site of the vision. At the same time, Prokhor gave his blessing to the creation of a monastic community on the now sanctified ground.

The earliest written references to the monastery date to the 15th century, and in the middle of the century, it was taken under the protection of Grand Prince Vasily II of Moscow. It prospered with commercial rights granted by the Moscow court, and its monks were active in the fish and grain trade along the Volga basin as far north as White Lake.

In 1553, Ivan the Terrible, great-grandson of Vasily II, visited the monastery following his conquest of the Tatar capital of Kazan in 1552. During this time, the Presentation Monastery was still built of logs. In 1609, a Polish force burned the monastery and killed many of its monks during the Time of Troubles. (A chapel stands on the site where the young monks were buried.) 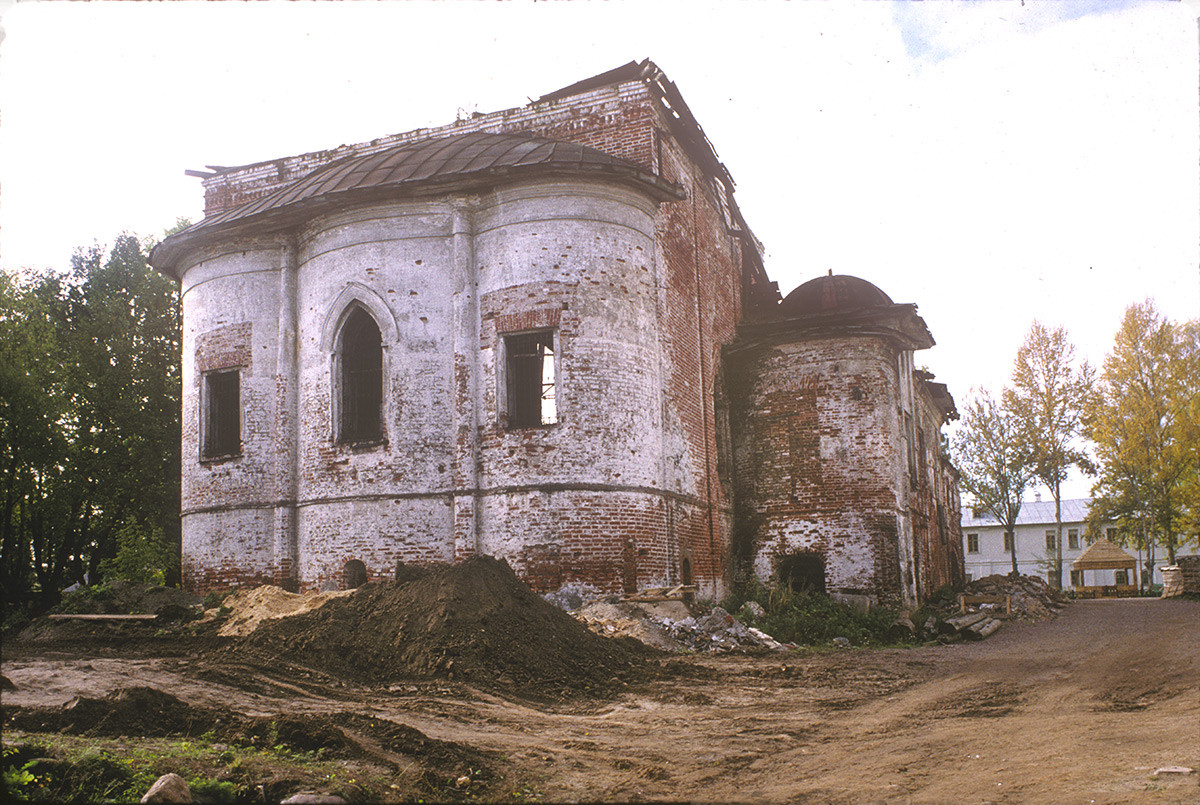 Ruins of Church of the Elevation of the Cross, East view. October 3, 1992

By the middle of the 17th century, the monastery regained its prosperity with wealthy patrons. The increasing renown of the miraculous Tolg Icon also made the monastery a significant pilgrimage center. With new resources, much of the monastery was rebuilt in brick, including the Church of the Elevation of the Cross, erected in the 1620s with an attached refectory (dining hall). 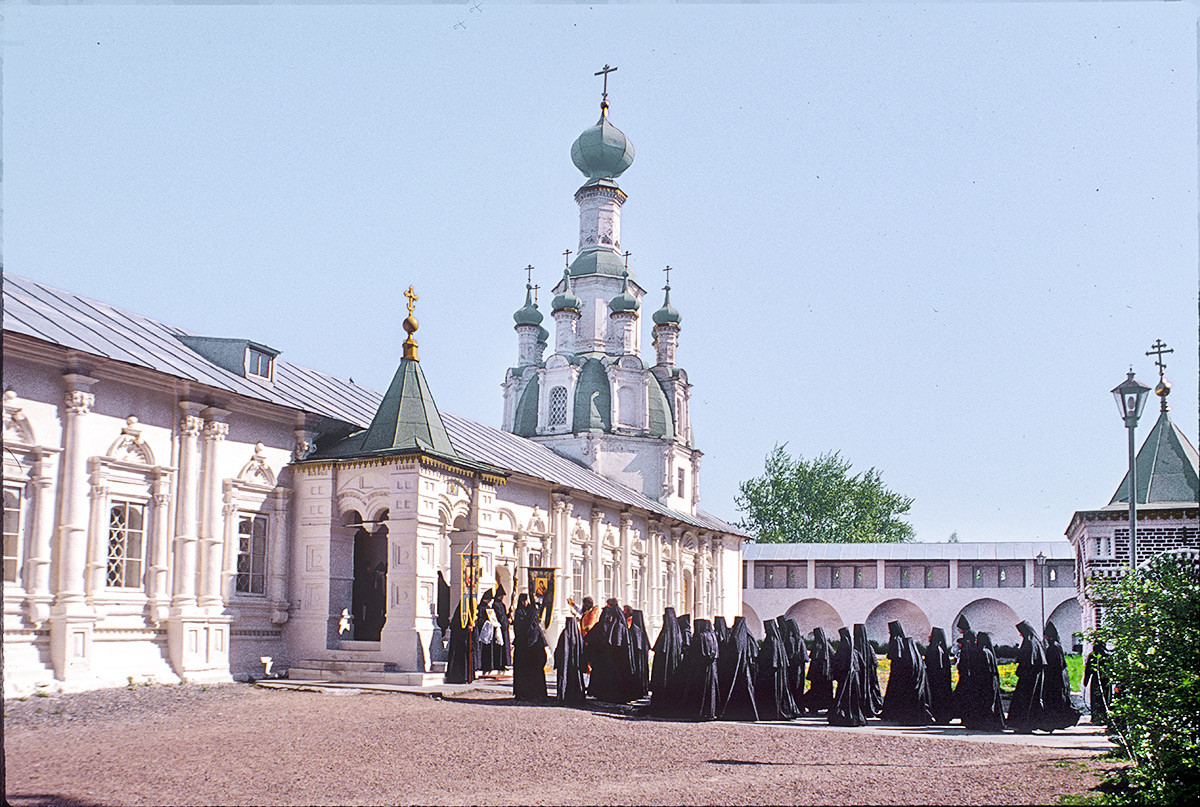 Church of the Miraculous Icon of the Savior. Southwest view with a procession of nuns. May 22, 1996

Construction accelerated in the second half of the century under the energetic direction of Gordian, who served as abbot from 1671 until 1700. Among his projects was the Church of St. Nicholas, built in 1672 as part of a Holy Gate ensemble completed at the turn of the 18th century. Monastic cloisters, walls, and towers were also rebuilt in brick, imparting an ever more imposing appearance to the monastery when viewed from the Volga.

The centerpiece of this construction phase was the Cathedral of the Presentation, built in 1681-83 in a traditional Yaroslavl design with five cupolas. In 1690-91 its interior was painted with frescoes by local artists. Unfortunately, the original paintings were severely damaged during the Soviet period.

In the 18th century, the most distinctive addition was the Church of the Miraculous Image of the Savior, which served the infirmary located in cloisters at the northeast corner of the monastery. The upper part over the main worship space consists of stacked octagons festively decorated with nine cupolas. (The Savior Church was the first shrine to be restored after the return of the monastery to religious use in 1987.) 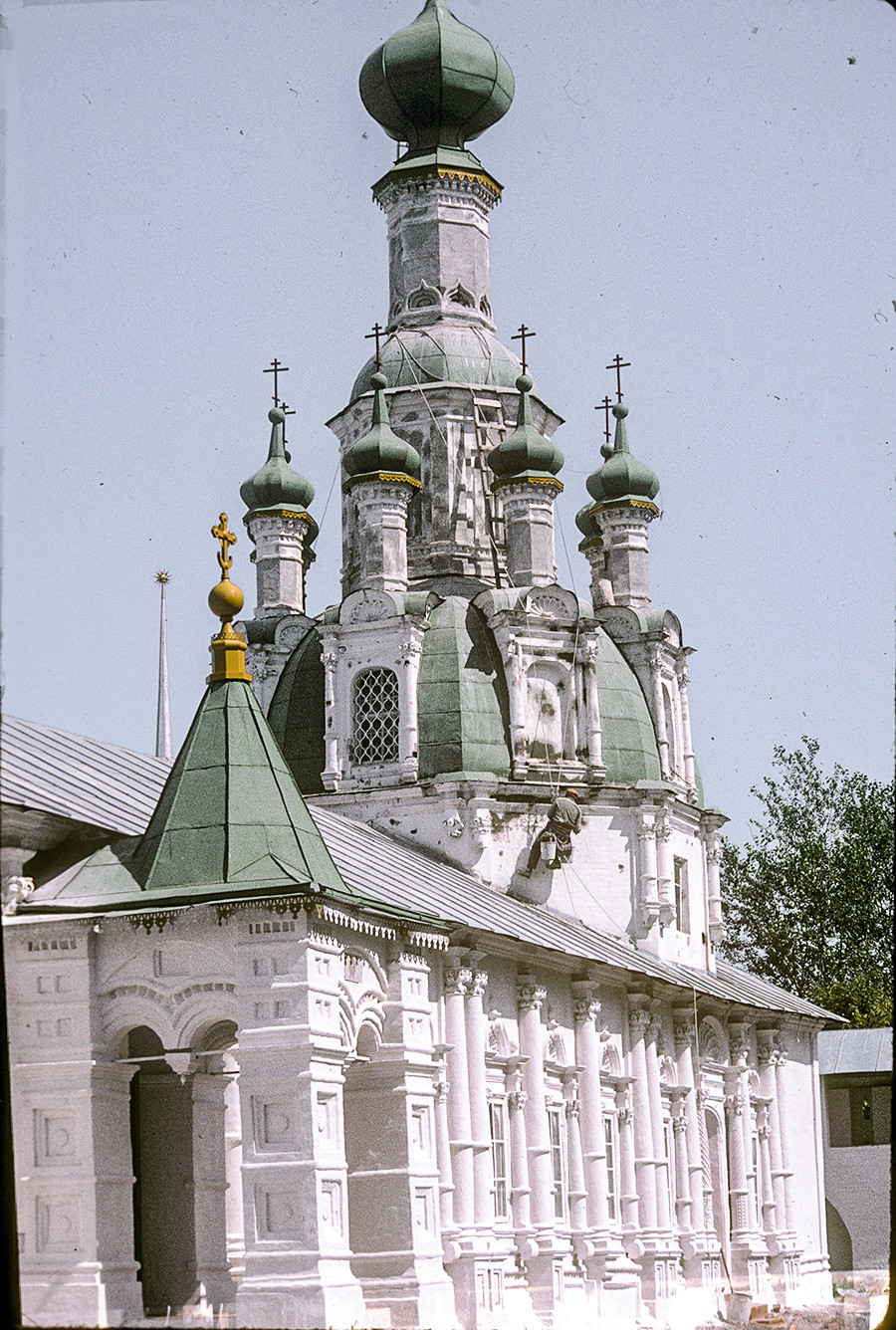 Church of the Miraculous Icon of the Savior. Southwest view. July 26, 1997

The Tolg Monastery’s reputation was affirmed by the visit of the young Empress Catherine II (the Great) in 1763. Her visit did not, however, prevent a decline in the monastery’s status and wealth as a result of her secularization of monastic land and other holdings in 1764.

Nonetheless, the monastery and its revered Tolg Icon attracted august visitors and humble pilgrims alike throughout the 19th century. The most notable architectural addition was the reconstruction in 1826 of the bell tower, originally built in 1683-85. Its soaring neoclassical form was designed by Pyotr Pankov, chief architect of Yaroslavl Province from 1823 until his death in 1848. 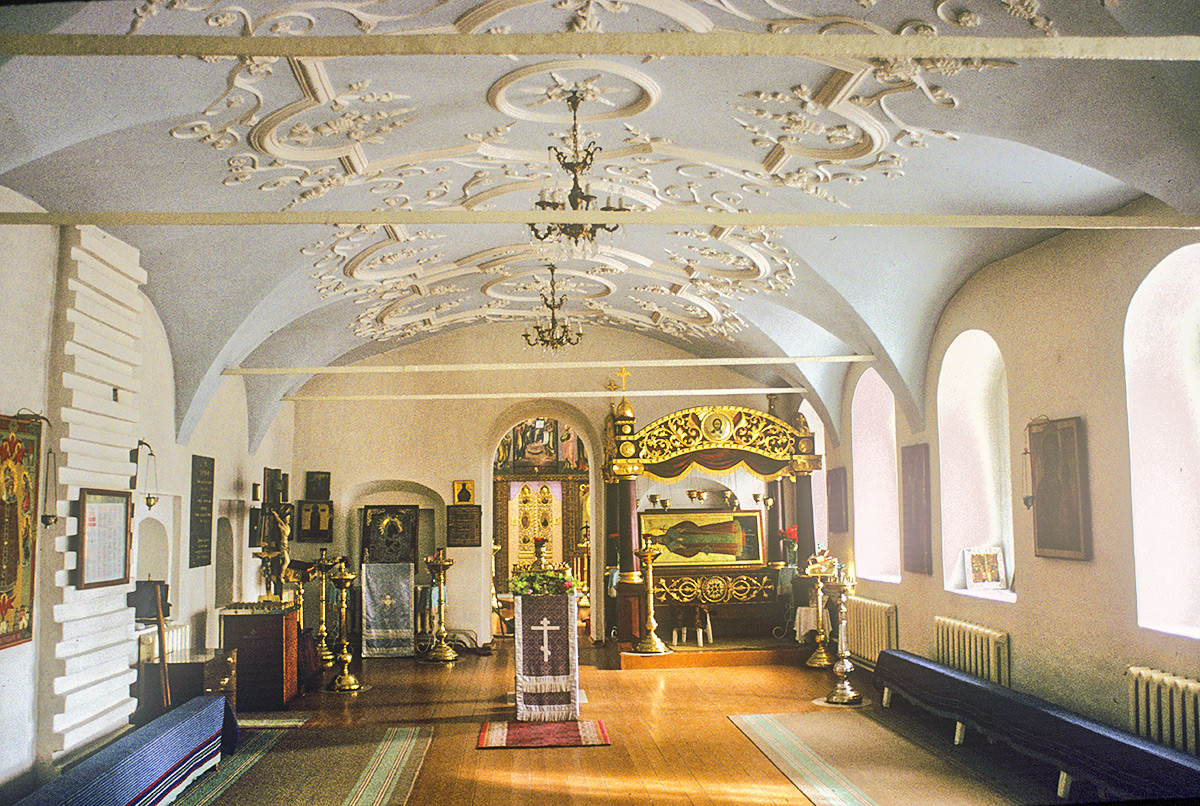 Church of the Miraculous Icon of the Savior. Interior, vestibule with sarcophagus containing relics of St. Dimitry of Rostov. October 3, 1992

In 1913, the Tolg Monastery was among the monasteries visited by Nicholas II and his family as part of their journey to Kostroma (also on the Volga) in celebration of the tercentenary of the Romanov Dynasty.

Following the establishment of Soviet power, the Tolg Monastery was closed in 1928 and subsequently converted for use as a detention center for juvenile delinquents. Without proper supervision and maintenance, severe damage was incurred throughout the ensemble, as my photographs from 1992 starkly show. 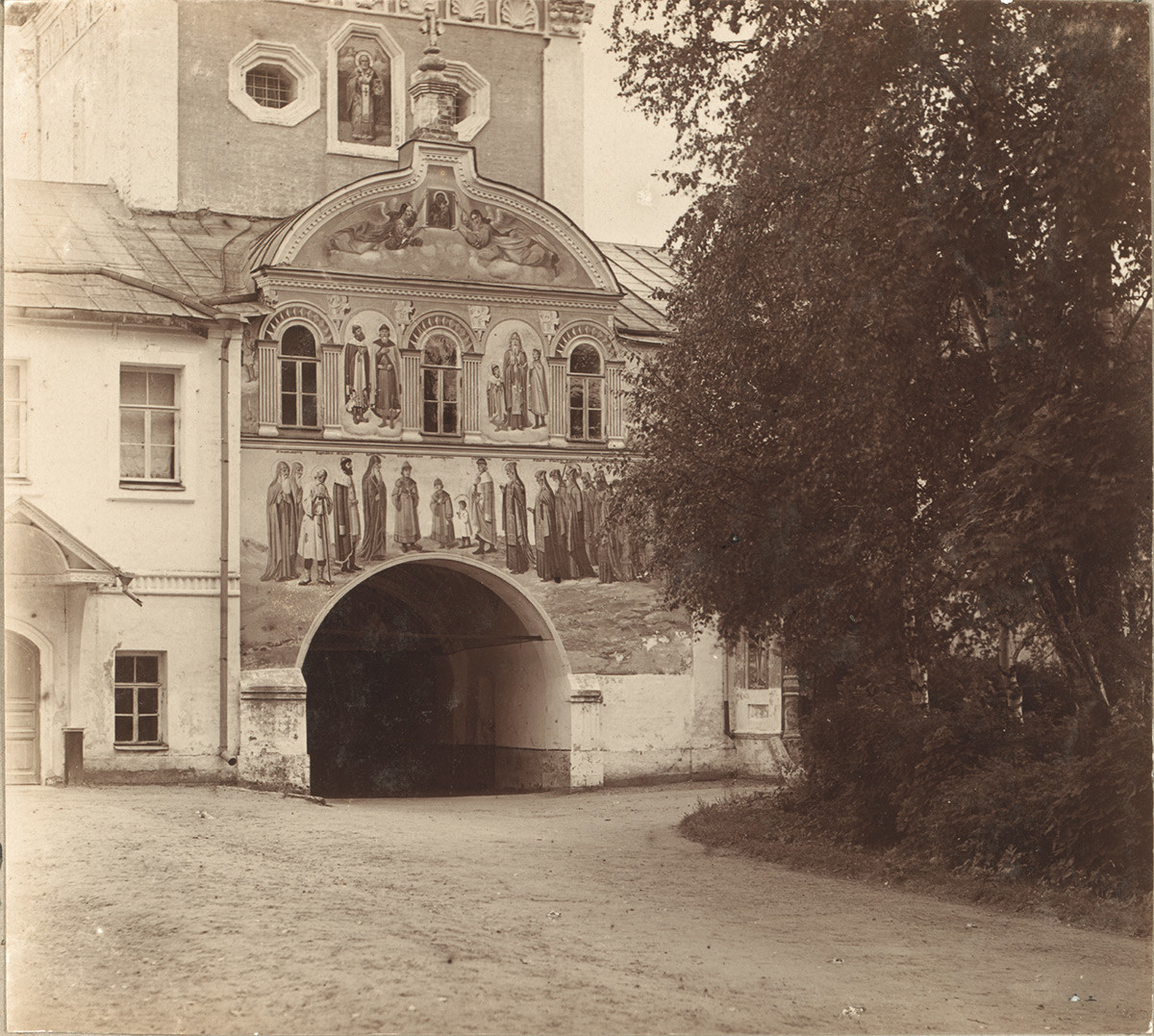 On the eve of the millennial celebration of the acceptance of Christianity in Kievan Rus (1988), the monastery was returned to the Orthodox Church and reconsecrated as a convent. Shortly thereafter, a painstaking process of rebuilding began. It continued for the next three decades.

The restoration of the Presentation Tolg Convent is a stellar example of what can be accomplished through the church’s cooperation on various levels with government authorities and private donors. The convent’s sisterhood has also played a vital role. Through their selfless work, this monastic community has again become an inspiration on the Volga River. 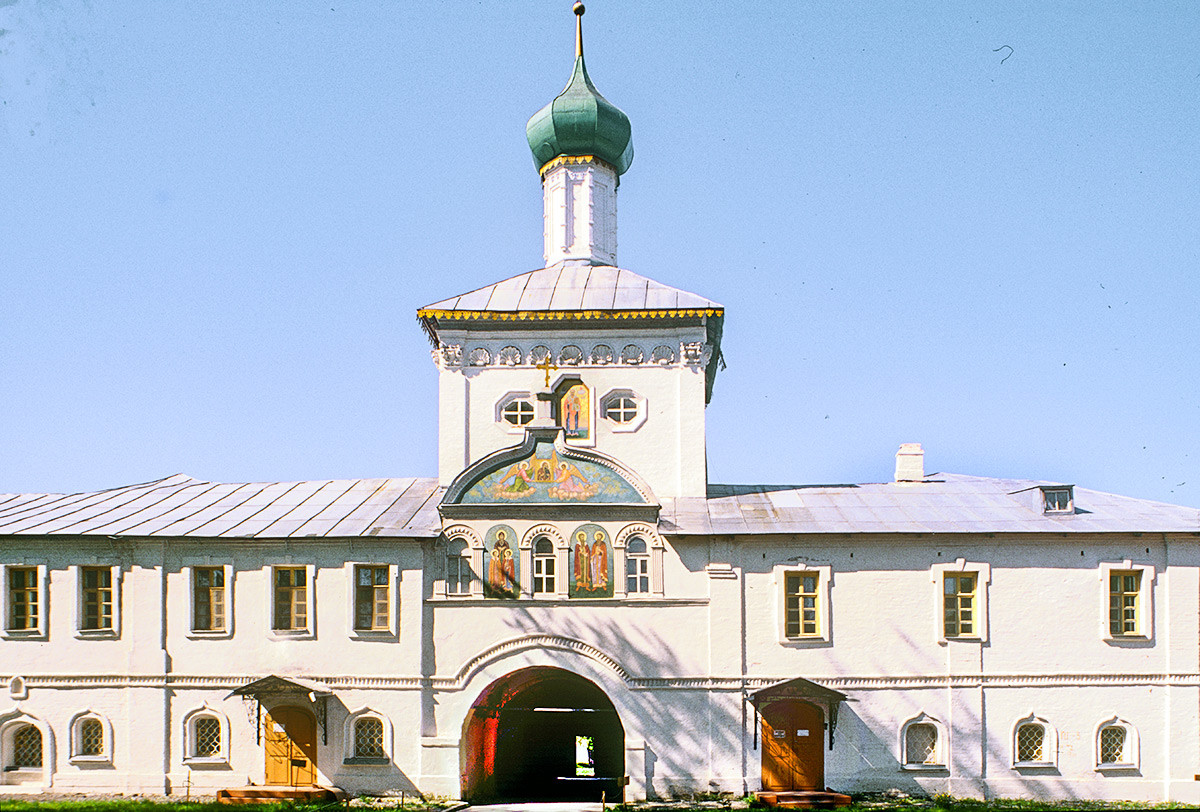