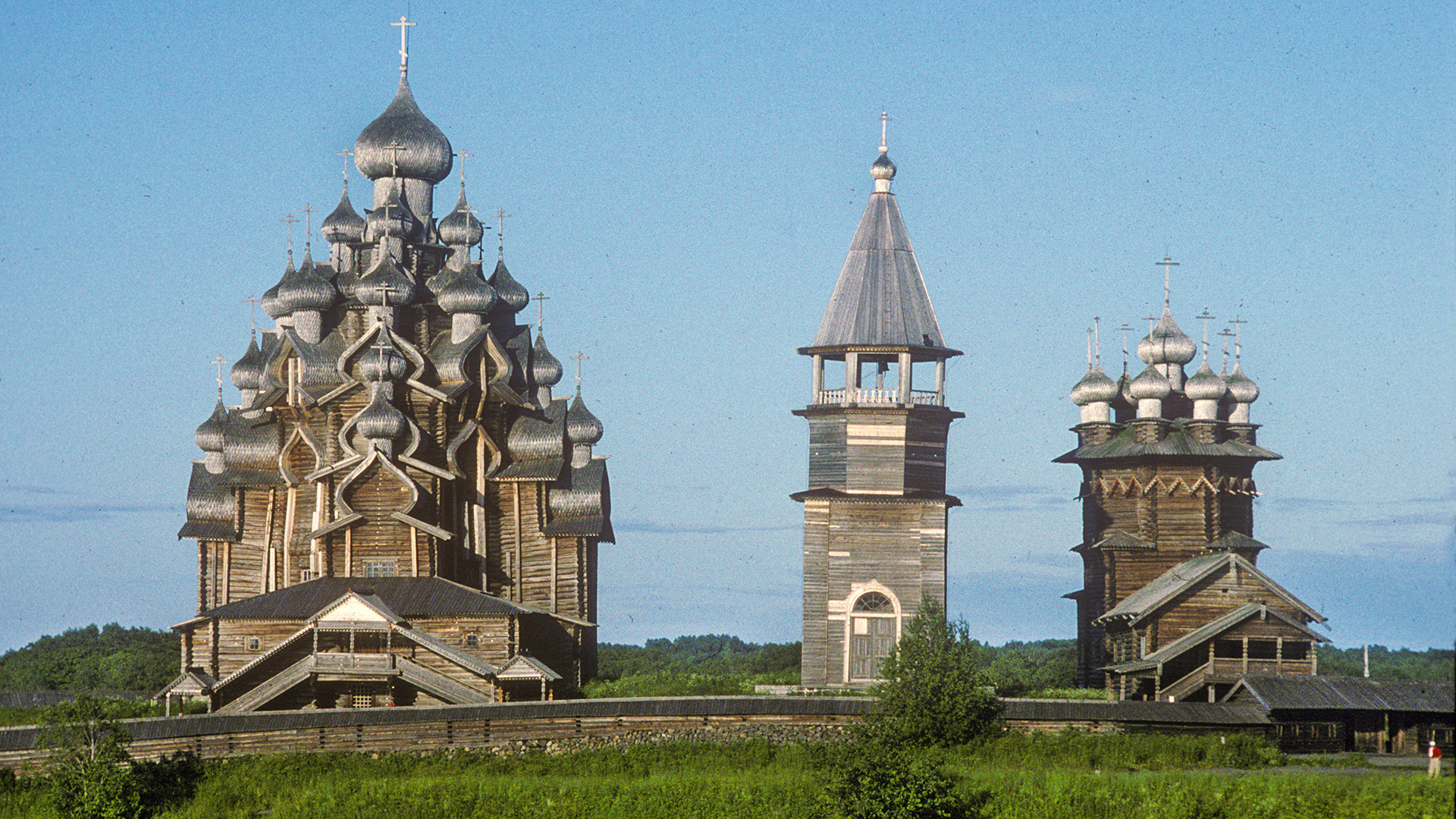 The forests of northern Russia between Lake Ladoga and the White Sea were once dotted with ensembles of log churches.

In the summer of 1909, Russian photographer and chemist Sergey Prokudin-Gorsky conducted an expedition along the Mariinsky Waterway System, linking St. Petersburg with the Volga River basin. The first major component of the system was the Mariinsky Canal, which connected the Vytegra River (flowing into Lake Onega toward St. Petersburg) and the Kovzha River (flowing south into White Lake).

The most impressive landmark on this stretch of the waterway - indeed, one of the most impressive in the Russian North - was the wooden Church of the Intercession of the Virgin at Ankhimovo, located on the high left bank of the Vytegra River. Built in 1708 on the site of a former 16th-century convent, the Intercession Church was destroyed in 1963 by a careless bonfire nearby. 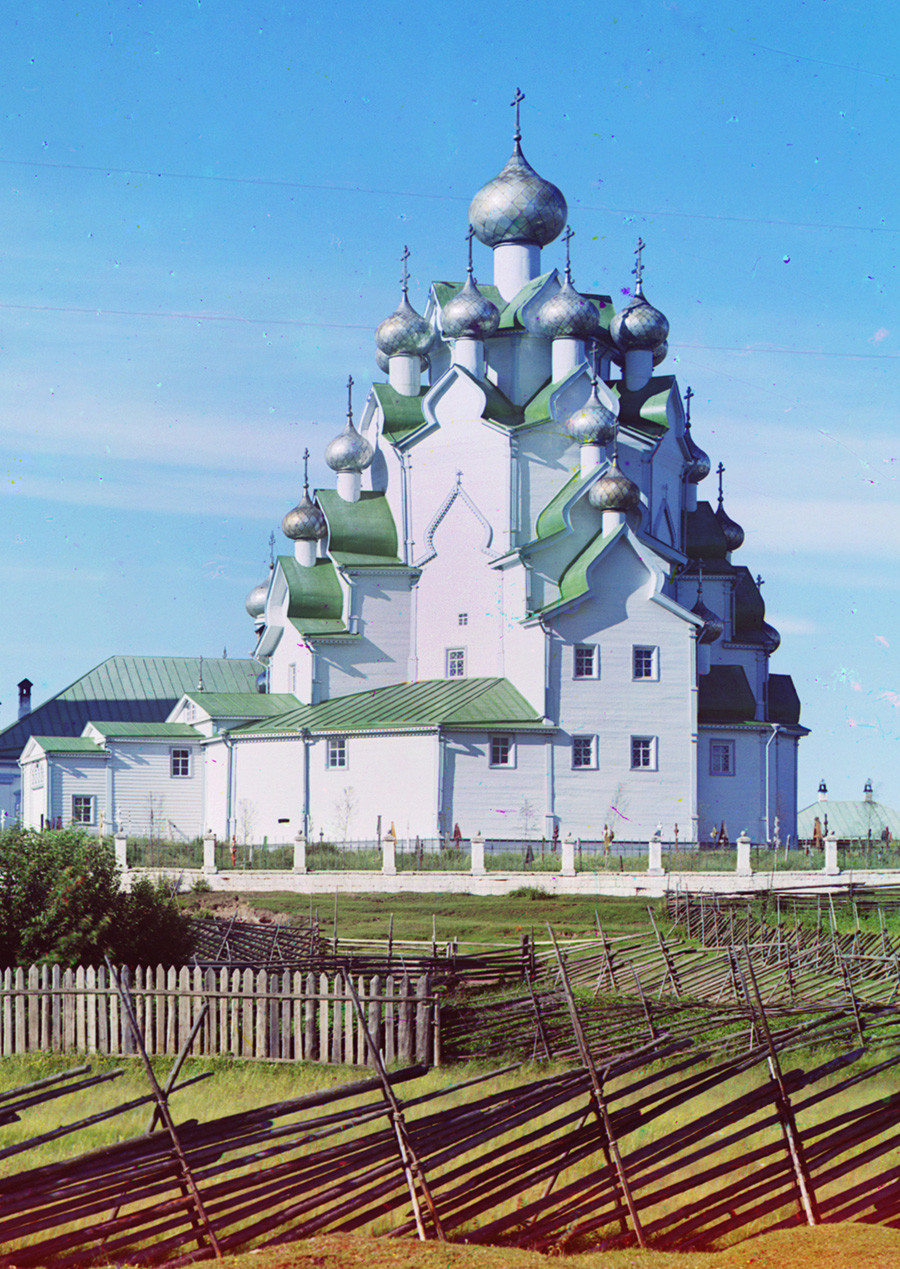 With this tragic loss, Russia was deprived of a defining cultural landmark. Fortunately, the monumental structure had been measured and photographed in the late 19th and 20th centuries. On the basis of this careful study, the Anikhimovo Intercession Church, with its multitude of domes, has now been reconstructed at a very different location near St. Petersburg.

Prokudin-Gorsky’s photographs of the Ankhimovo church, taken in 1909, occupy a unique place by virtue of their color. The photographs suggest that the Intercession Church might well have been the prototype for one of the most famous structures in all Russia: the Church of the Transfiguration on Kizhi Island, one of almost 1,400 small islands in Karelia’s Lake Onega. It was erected within a decade of the wooden masterpiece at Ankhimovo and some have even suggested that they were constructed by the same master builder. 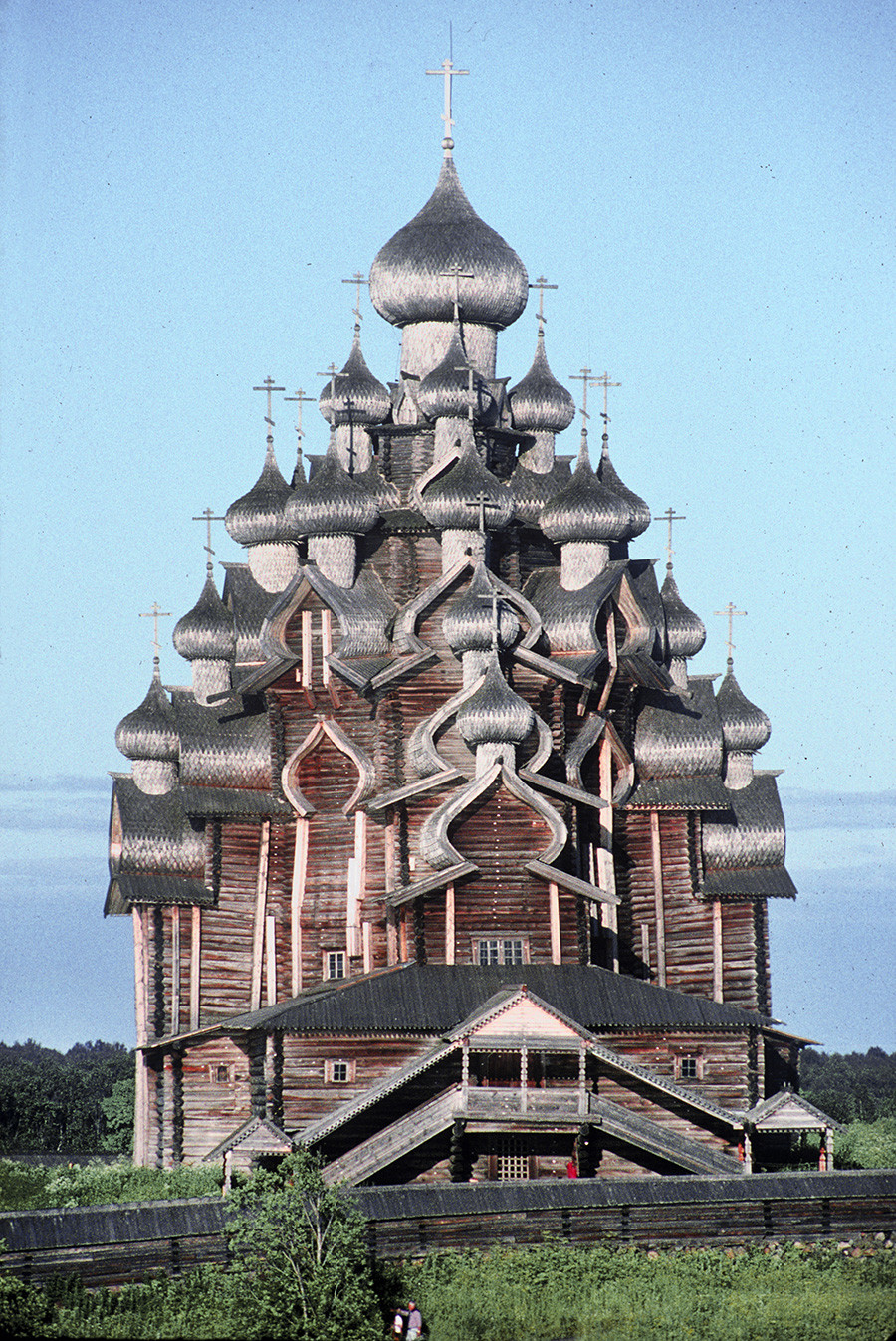 Kizhi has long been known as a sacred space, like other islands in the Russian North (the Solovetsky Archipelago, for example. Yet its unusually picturesque setting exists within a length of only 6 kilometers.

A century of protecting the past 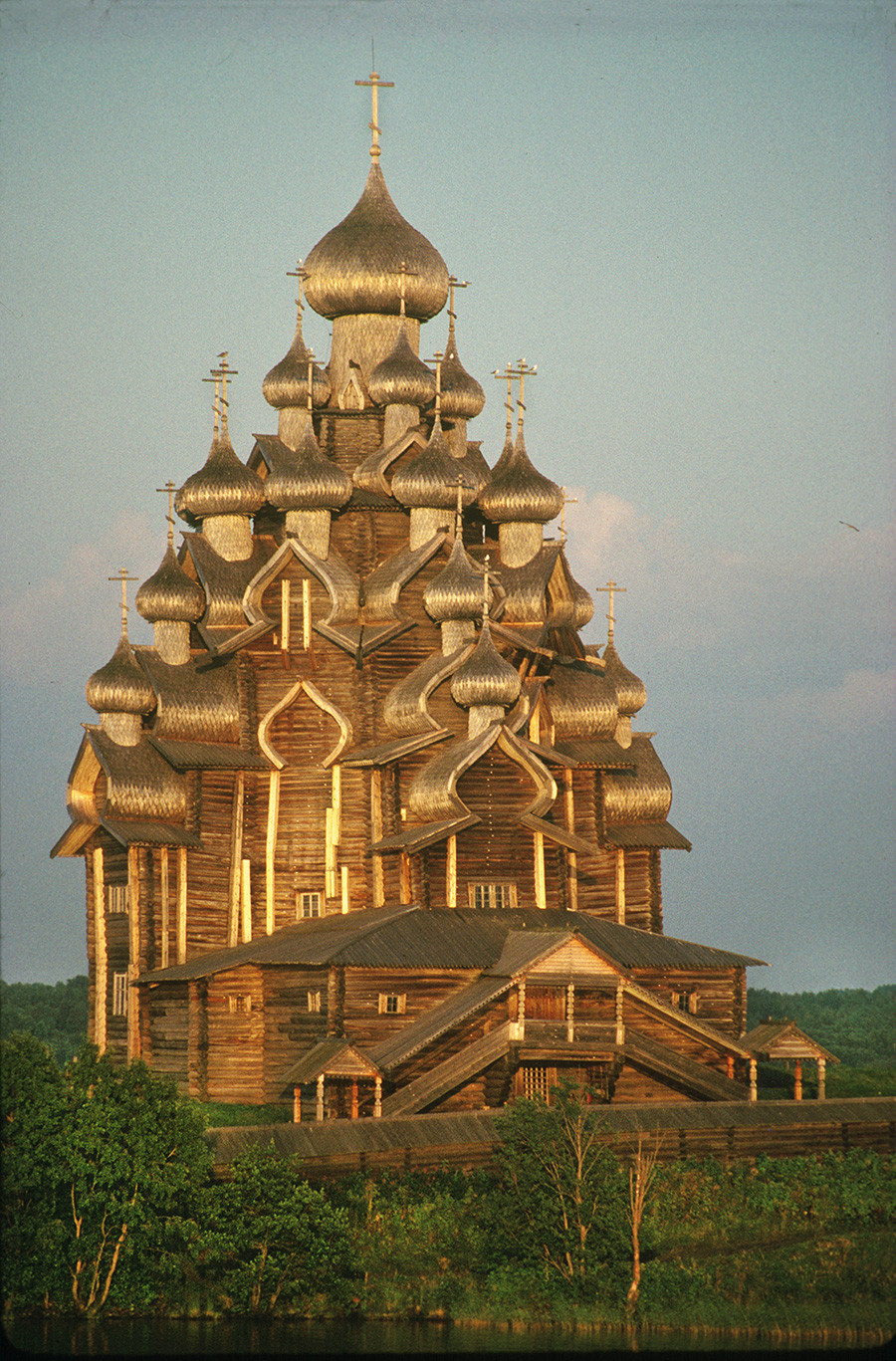 Church of the Transfiguration. Northwest view in late evening sunlight after thunderstorm. August 6, 1991

This extraordinary beauty alone, however, would not have saved the site from the decay and vandalism that destroyed so many other architectural masterpieces in the Russian North. For over a century, the efforts of Russia's leading preservationists of traditional architecture - most notably Alexander Opolovnikov - labored to ensure the protection of this legacy.

Sustained preservation efforts began soon after the Great Patriotic War, and in 1966 Kizhi Island achieved the status of national architecture and historic museum. In 1990 it was designated a UNESCO World Heritage Site. 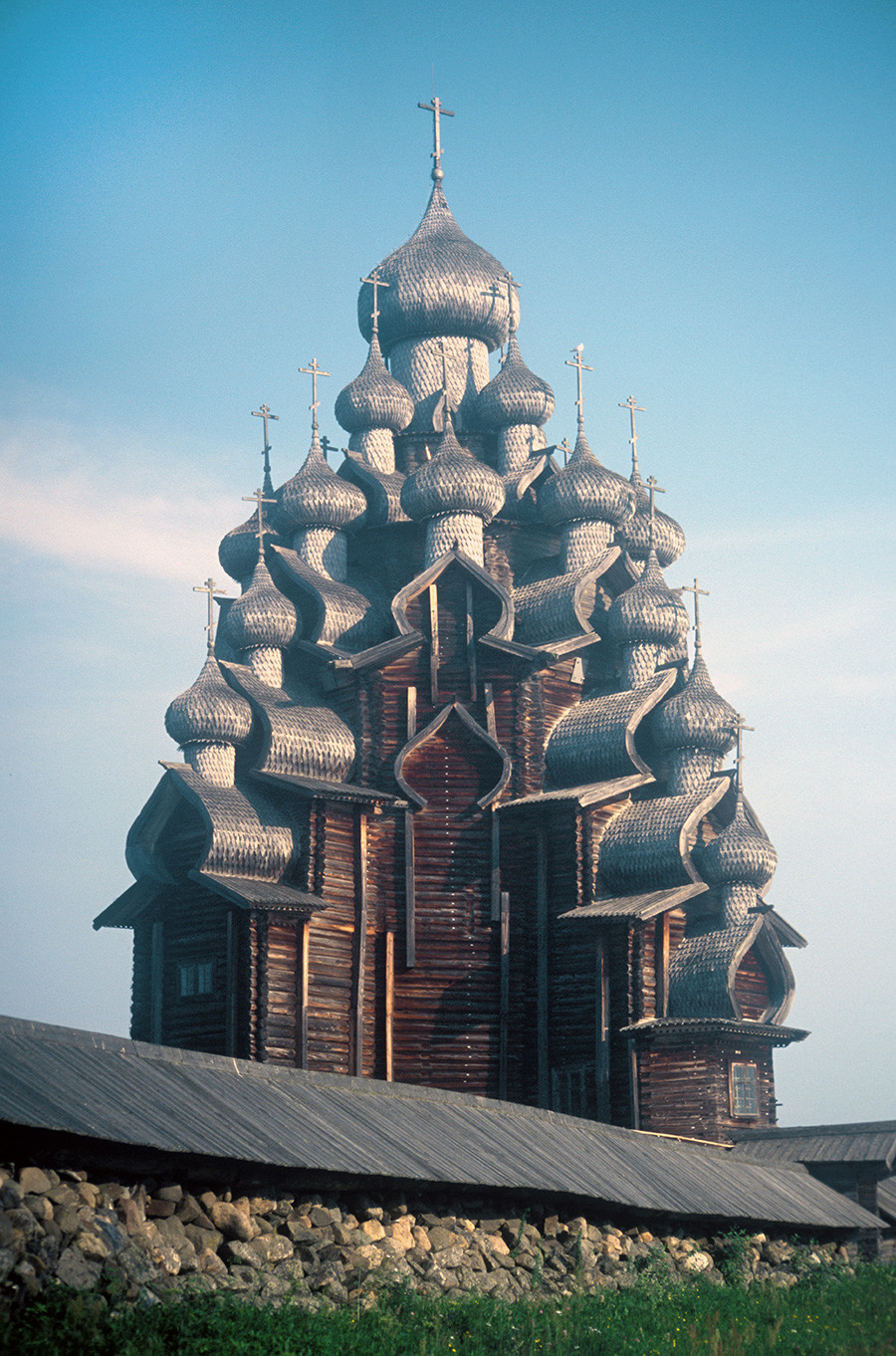 Church of the Transfiguration. Southeast view in the morning light. July 13, 2007

These churches were located near the water on open space in the southwest part of Kizhi Island. They formed a pogost, a term which at that time designated an enclosed cemetery with a parish or district church. 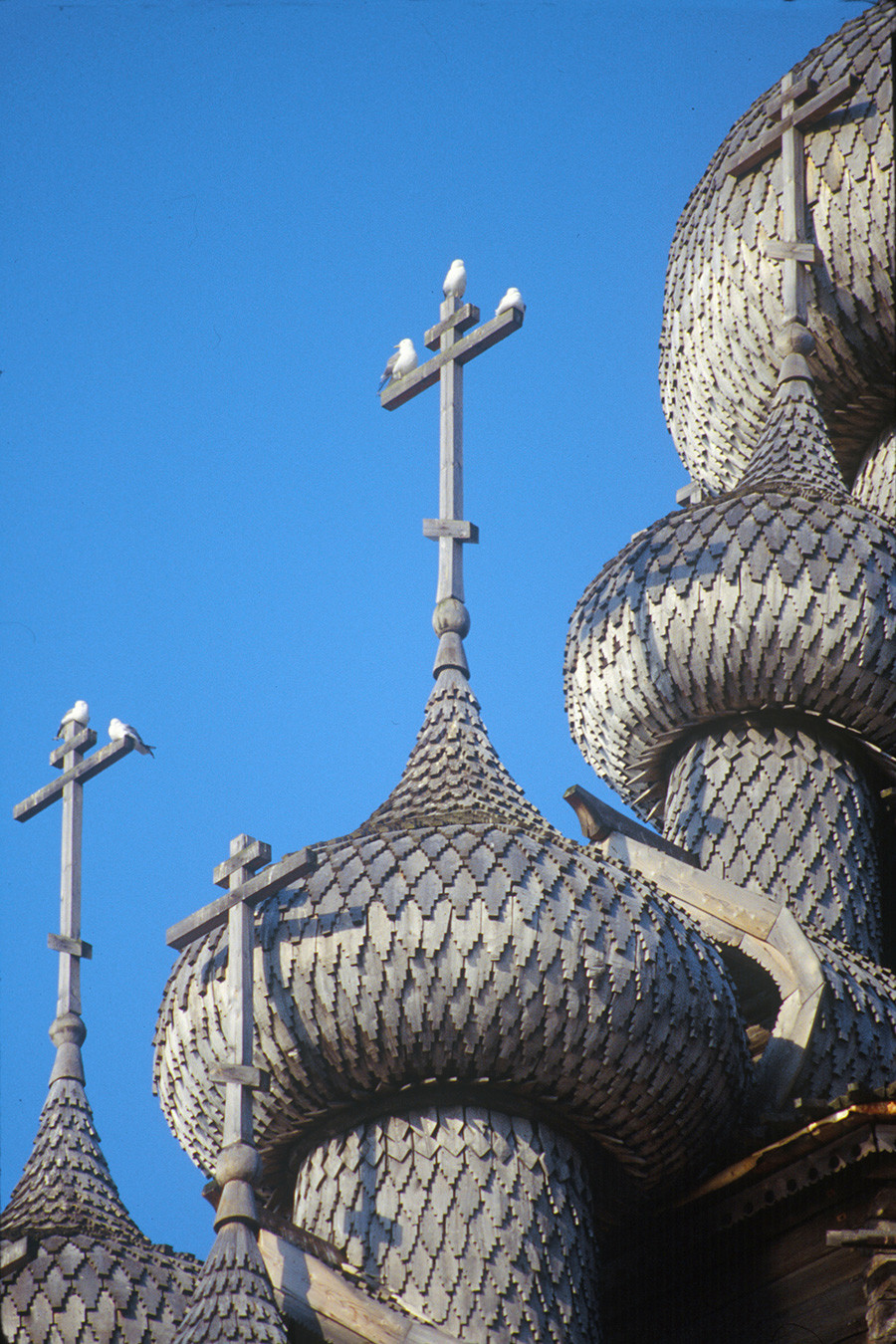 The ensemble that existed in the 17th century was destroyed by a lightning strike and fire in 1693. Reconstruction began soon thereafter with a small log church dedicated to the Intercession of the Virgin.

One of Russia’s most iconic structures

In June 1714, 20 years after the fire, work began on a far larger structure dedicated to the Transfiguration. Its soaring pyramidal silhouette – more than 120 feet high –signifies consecrated ground from a great distance, and the ascending levels of the structure reinforce that symbolic purpose at every point. 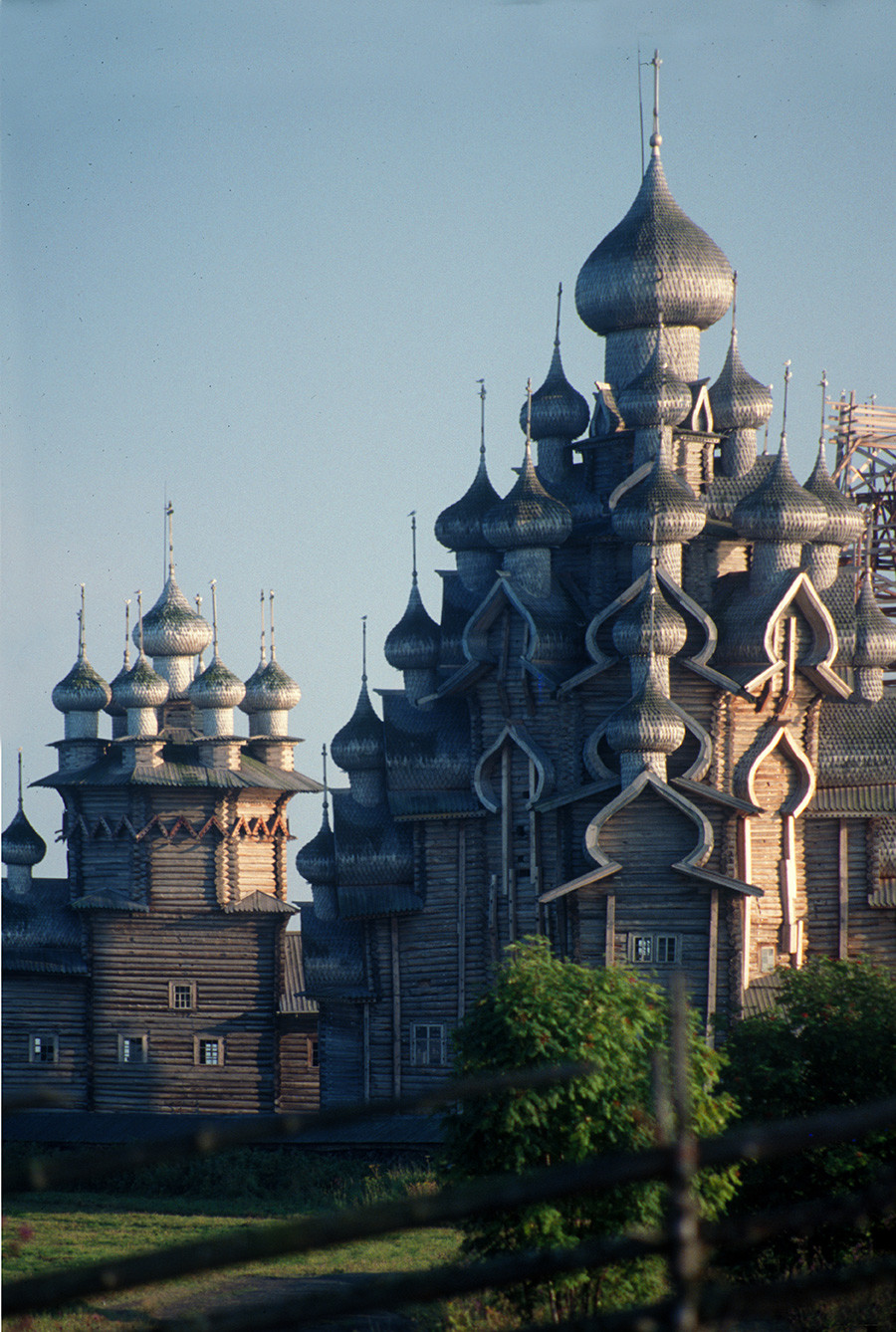 Kizhi pogost, north view with telephoto lens across pasture fence. From left: Church of the Intercession, Church of the Transfiguration. August 6, 1991

Although the Transfiguration Church, with its profusion of domes, produces an impression of complexity; the design derives from a rigorous structural and aesthetic logic. In this respect it resembles St. Basil's on Red Square in Moscow,

As with the Intercession Church at Ankhimovo, the core of the Transfiguration Church is an octahedron, rising in three tiers and buttressed by extensions ("arms") at the four compass points. These extensions are also stepped, thus providing platforms for an array of domes (cupolas) - twenty on the tiered structure, plus one at the top and another on the east side above the apse containing the main altar. A vestibule and porch extend on the west side and may have supported an additional cupola. 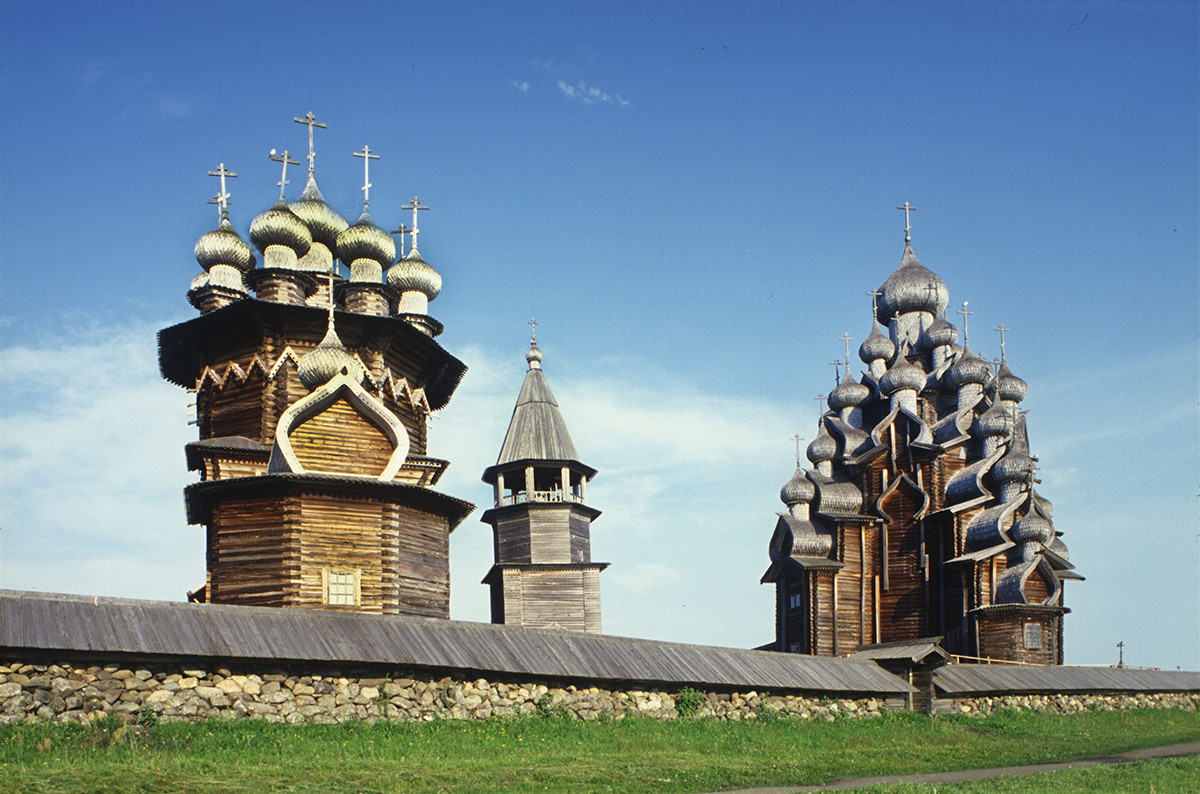 Kizhi pogost. Southeast view with fieldstone wall. From left: Church of the Intercession, bell tower, Church of the Transfiguration. July 13, 2007

This intricate pattern of cupolas and log elements is emphasized by the natural properties of the different woods used in the Transfiguration Church. The pine log walls age to a dark color in contrast to the domes, which are covered with some 30,000 curved, pointed aspen shingles that eventually turn to a silver hue. Tightly fitted over frames that resemble cages, the aspen shingles were fastened with iron nails - thus belying the legend that the church was “built without a single nail.”

In a common late 19th-century practice, these cupola shingles were replaced with metal sheathing that was easier to maintain and was considered more attractive. During the same period, the dark log walls of the Transfiguration Church were clad in plank siding painted white. (The same practice is visible in the Prokudin-Gorsky’s photographs of the Intercession Church at Ankhimovo). 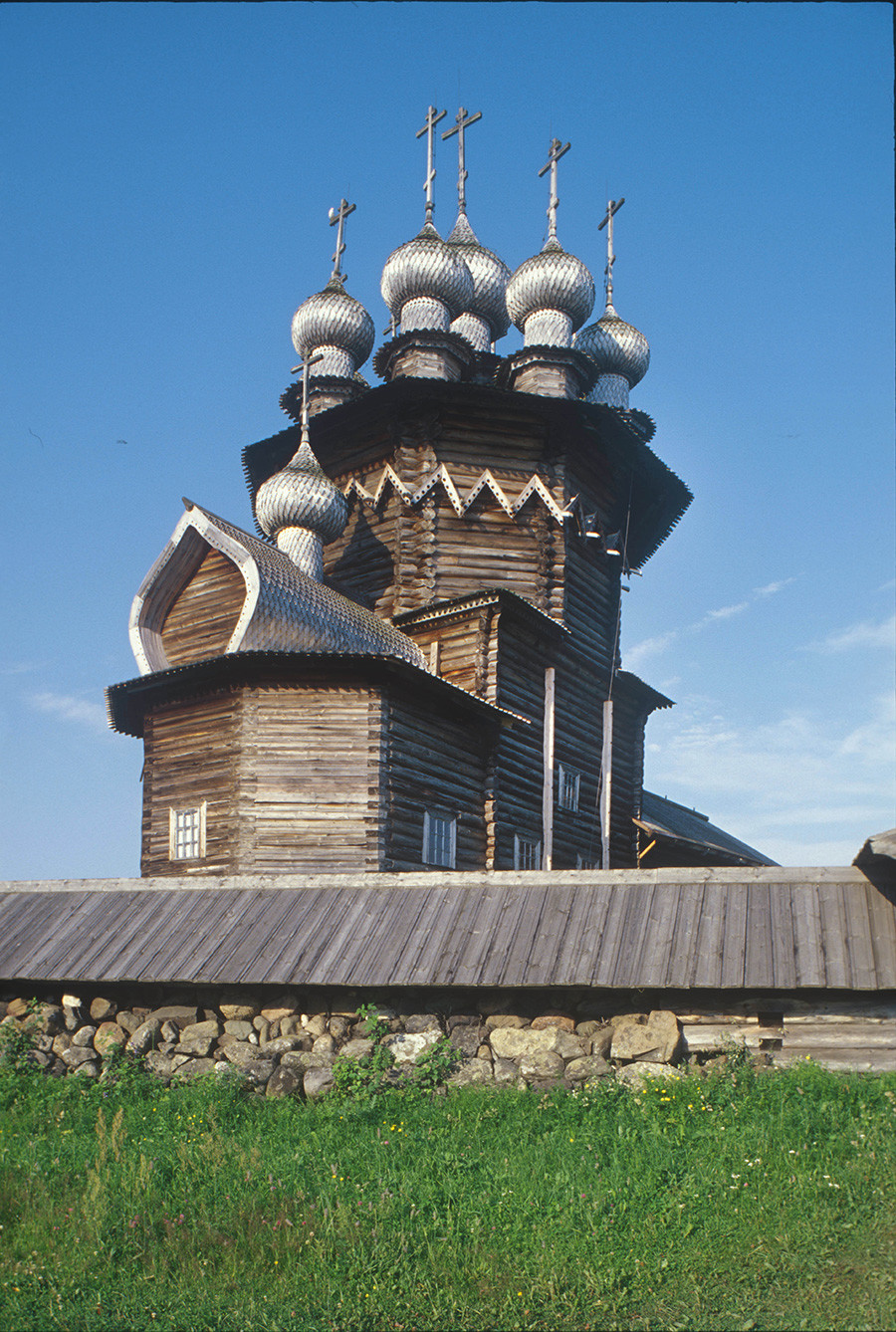 Post-war Soviet restoration practice placed a higher value on folk craftwork. At Kizhi, the plank siding was removed, and the aspen shingles were replaced in imitation of surviving examples.

The design of the elaborate upper structure of the Transfiguration Church was not only symbolically imposing, but it also provided an efficient space for ventilation to preserve the walls from decay. As was typical of tall wooden churches in the Russian north, the towering structure was not visible from the interior, which was capped at a low level by a ceiling painted with saints and archangels - known as a "sky" or nebo - over the central part of the church. This "sky" provided a culmination to the religious imagery of the icon screen in front of the altar. 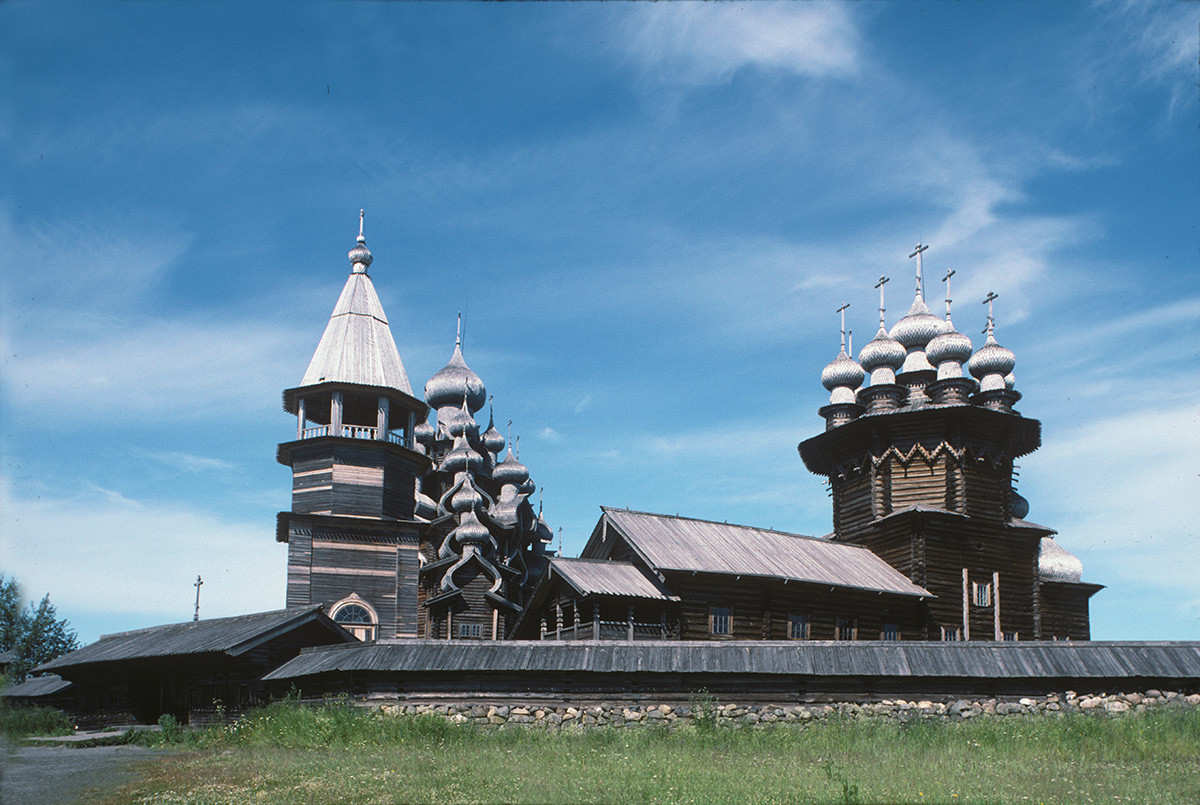 Kizhi pogost. South view with fieldstone wall. From left: bell tower, Church of the Transfiguration (in background), Church of the Intercession. July 13, 1993

Unfortunately, the "sky" at the Kizhi Transfiguration Church was lost during World War II, and its form is known only through black-and-white photographs. The icons in the icon screen were also moved during major attempts to preserve and stabilize the endangered structure.

Part of an ensemble

Because of its great size, the Church of the Transfiguration would have been difficult to heat and was therefore intended for use during major church holidays from Easter until the Feast of the Intercession (mid-October). It was not uncommon in Russia to have paired churches for summer and winter worship. 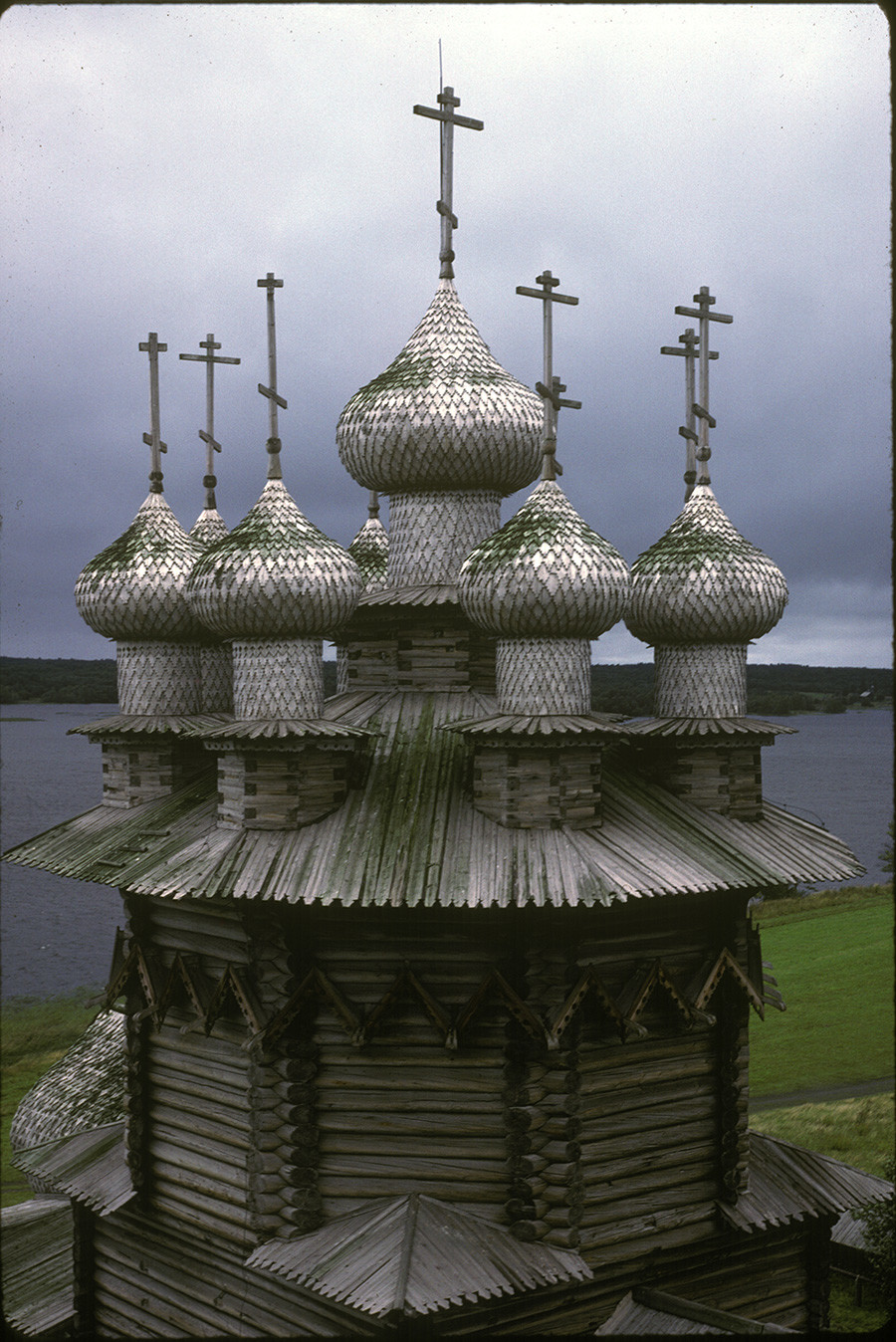 At the Kizhi pogost, the adjoining "winter" Church of the Intercession was rebuilt in 1764 and provides an admirable visual complement to the ensemble. Whereas the Transfiguration Church soars, the Intercession accentuates the horizontal, with an extended “refectory,” or vestibule, on the west end.

The Intercession Church’s crown of eight cupolas surrounding the main cupola at the top of its octagonal core is a dramatic resolution that enhances, rather than competes with, the form of the Transfiguration Church. 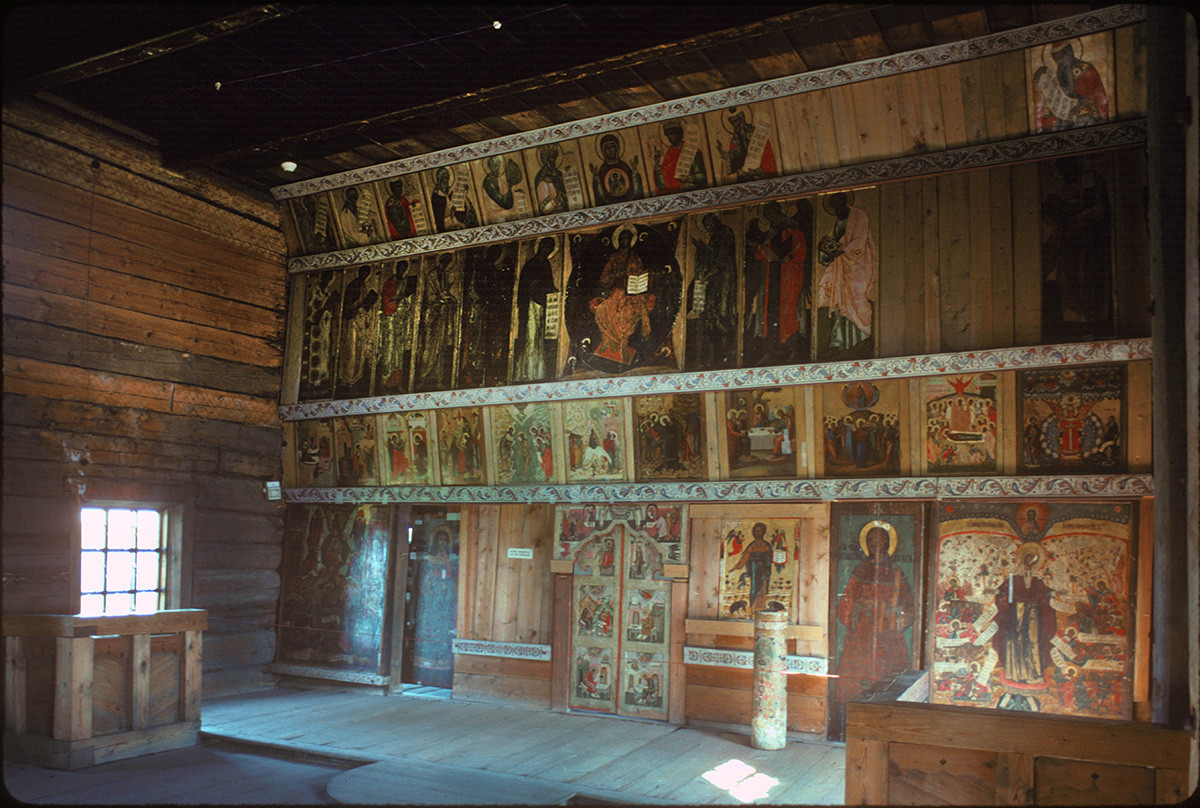 Church of the Intercession. Interior with icon screen before restoration. July 13, 1993

The final vertical element of the original pogost ensemble at Kizhi is a bell tower with a tent roof between and in front of the two churches. Originally built in the late eighteenth century, it was rebuilt in 1874 and renovated most recently in the early 1990s.

The territory of the pogost, which included a cemetery, was enclosed by a low wall of horizontal logs on a base of fieldstone. Although largely dismantled by the 20th century, it was reconstructed by Alexander Opolovnikov on the basis of surviving examples elsewhere in the region. 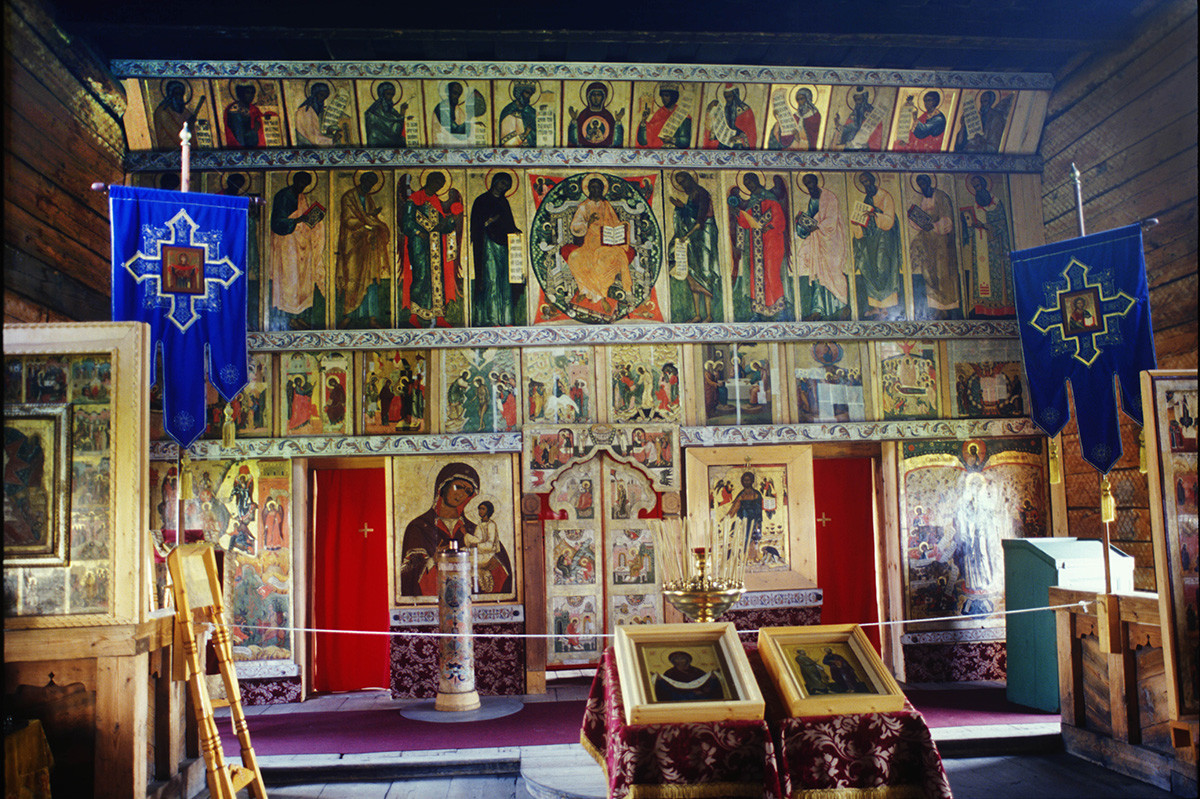 Church of the Intercession. Interior with icon screen after restoration & reconsecration. July 13, 2007

The drama surrounding the preservation of the Transfiguration Church reached a crisis in the late 20th century. Closed to visitors in 1980 because of its increasingly perilous deformation, the monument was the subject of years of debate on the best approach to its preservation. 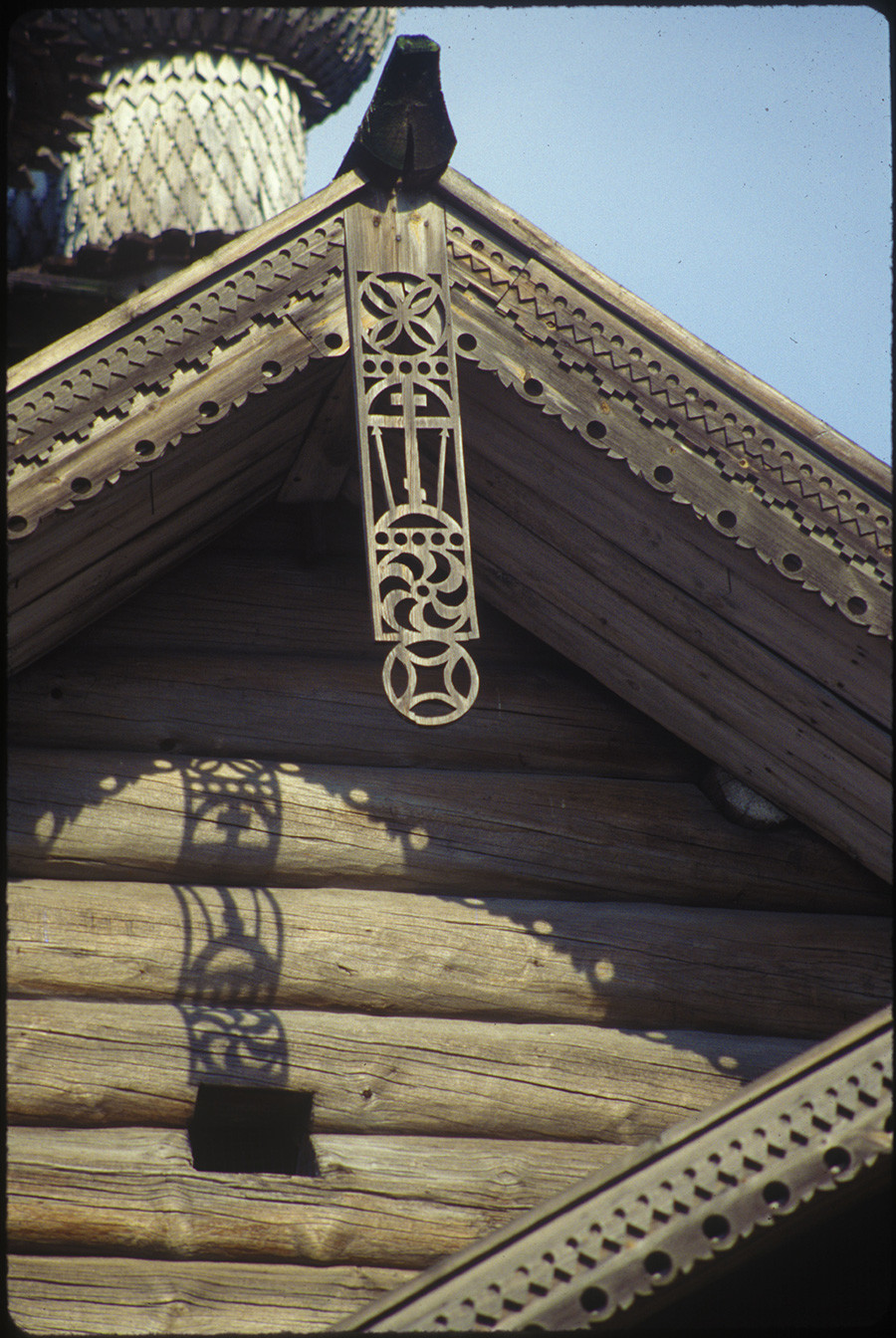 At the beginning of this century, a consensus was achieved with the contribution of specialists from several countries. In 2009 work began on an enormously complex process that involved modern scaffolding and hydraulic lifts to replaced damaged logs. The process was finally completed and approved in 2020.

The middle and northern parts of Kizhi Island have additional chapels, houses, barns and small churches brought to the island from villages in the surrounding area as part of a national open-air museum. All these structures display the charm and beauty characteristic of traditional Russian log architecture, with decorative carved end boards and wooden cupolas.

Whether approaching or leaving Kizhi Island, the soaring domed forms of the Kizhi church ensemble create an indelible impression from the water. Although less known than the great Gothic cathedrals, the Transfiguration Church is their equal as an inspired expression of the spiritual impulse in architecture. 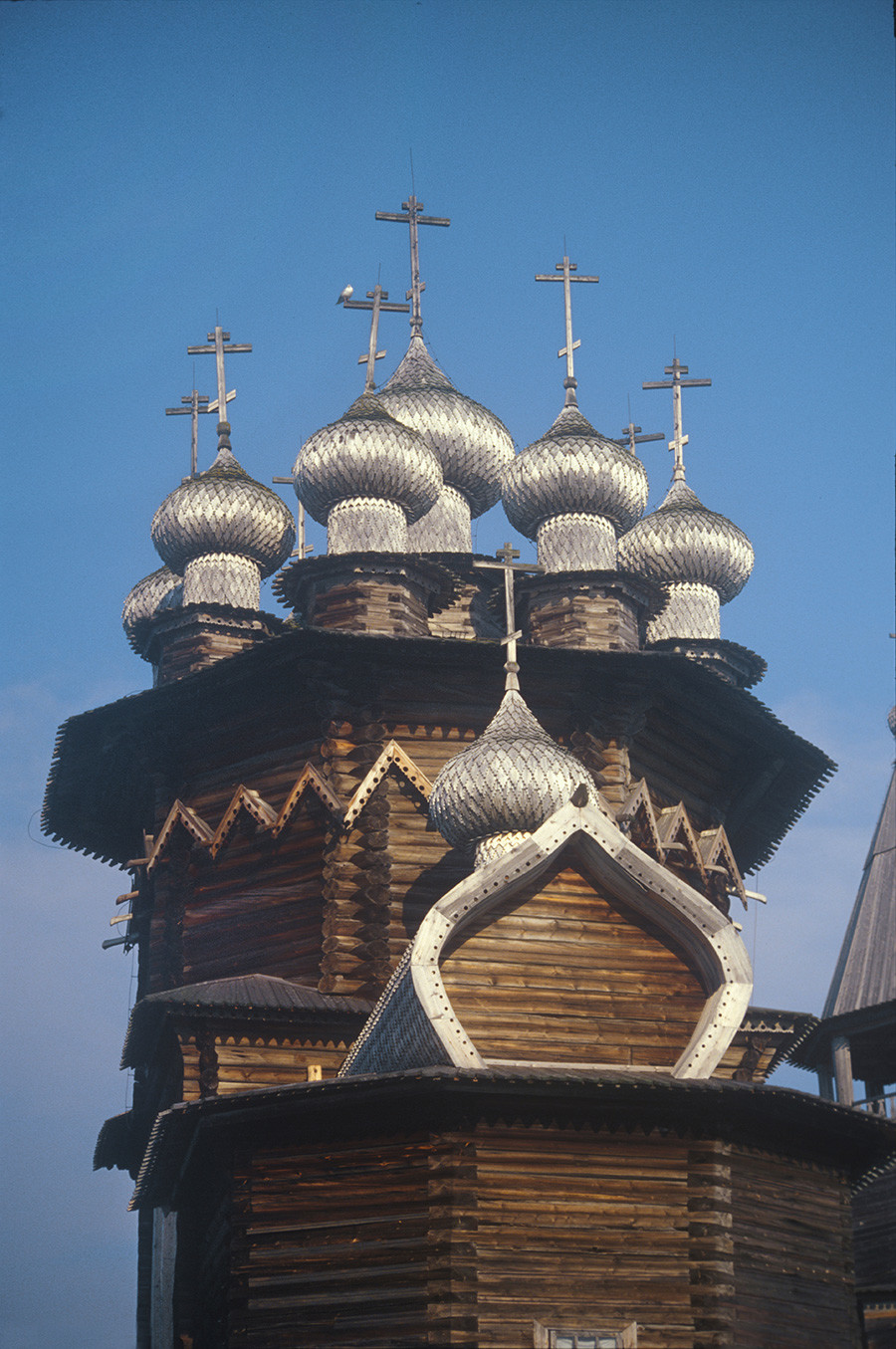