The world’s shortest metro line is in Russia. It has just one station 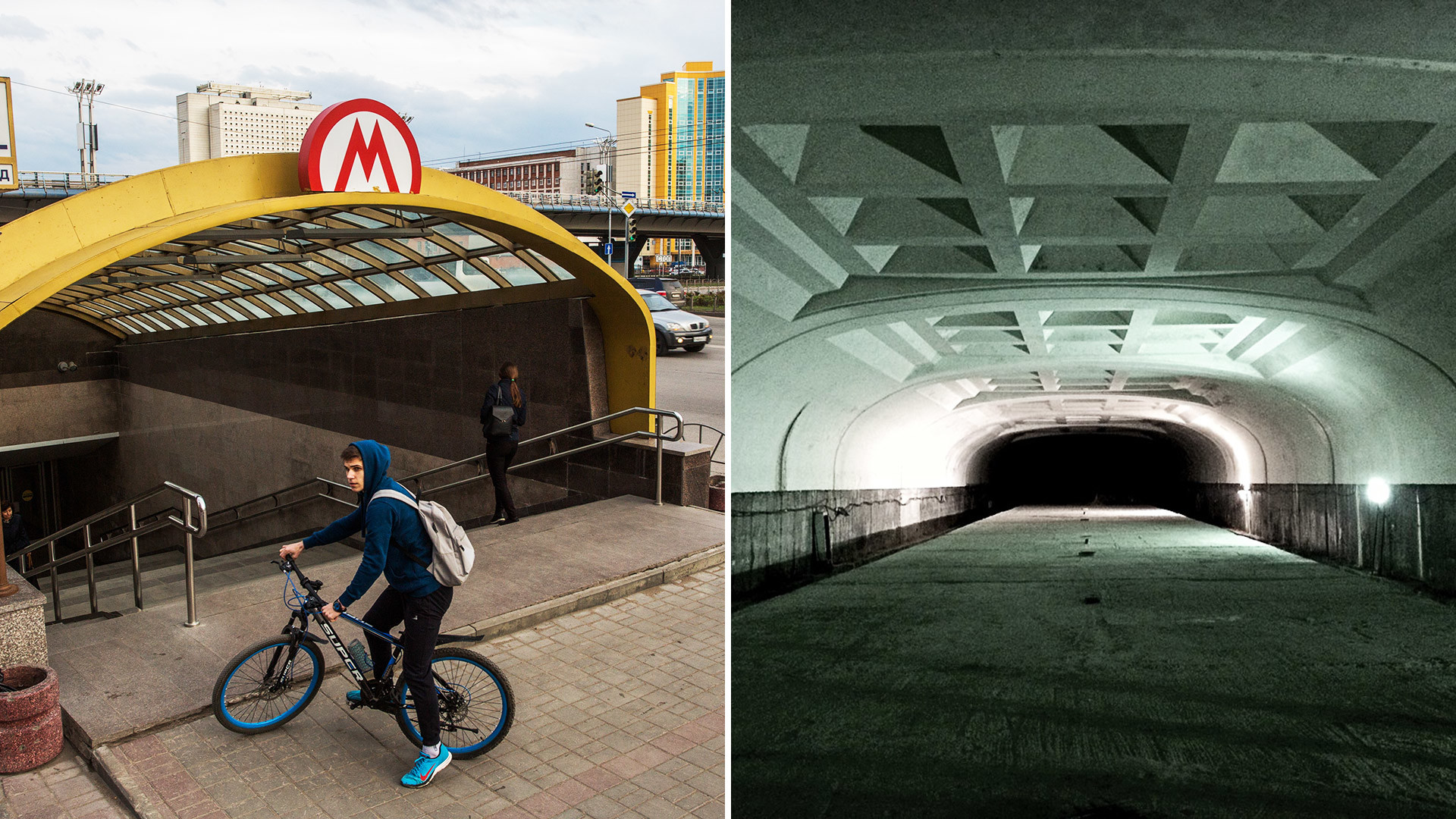 Omsk metro outside... and inside.

Dmitry Feoktistov/TASS; LagunOff 57 (CC BY-SA 4.0)
The Omsk Metro has its own logo, its own map, its own travel tokens and just one station. Here's the story of how this notorious unfinished construction project turned into a popular meme in Russia.

Walking through the center of Omsk in Siberia, you can see a metro entrance with the huge letter "M" written on it. People quickly shuffle in and out, hurrying about their own business. The only problem is that there is not actually a metro here—it is just an underpass to the other side of the road. 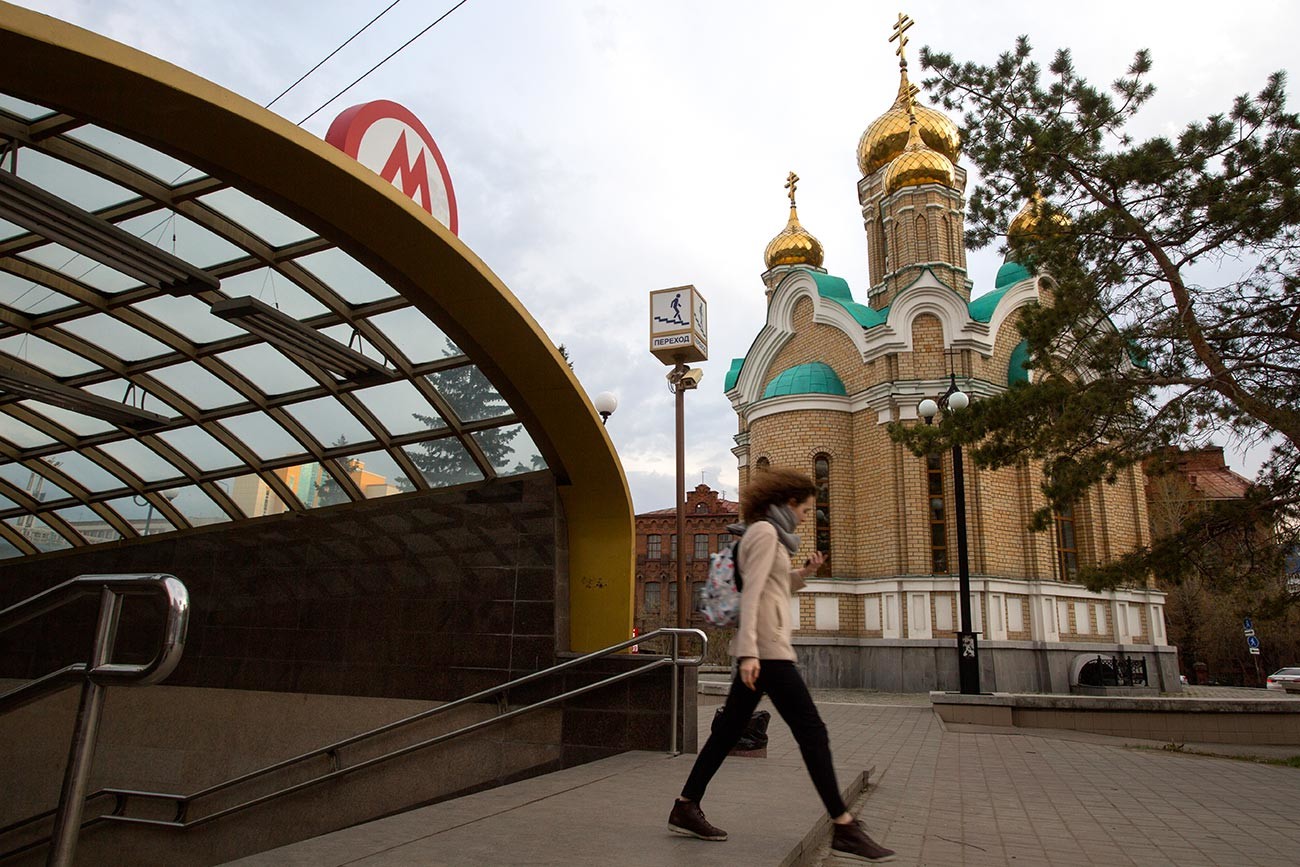 This is how the Omsk metro station looks from the outside.

The metro in Omsk was planned in the late 1980s. In Soviet times, the assumption was that every city with a population of over a million should have its own subway. However, construction only began in 1992. 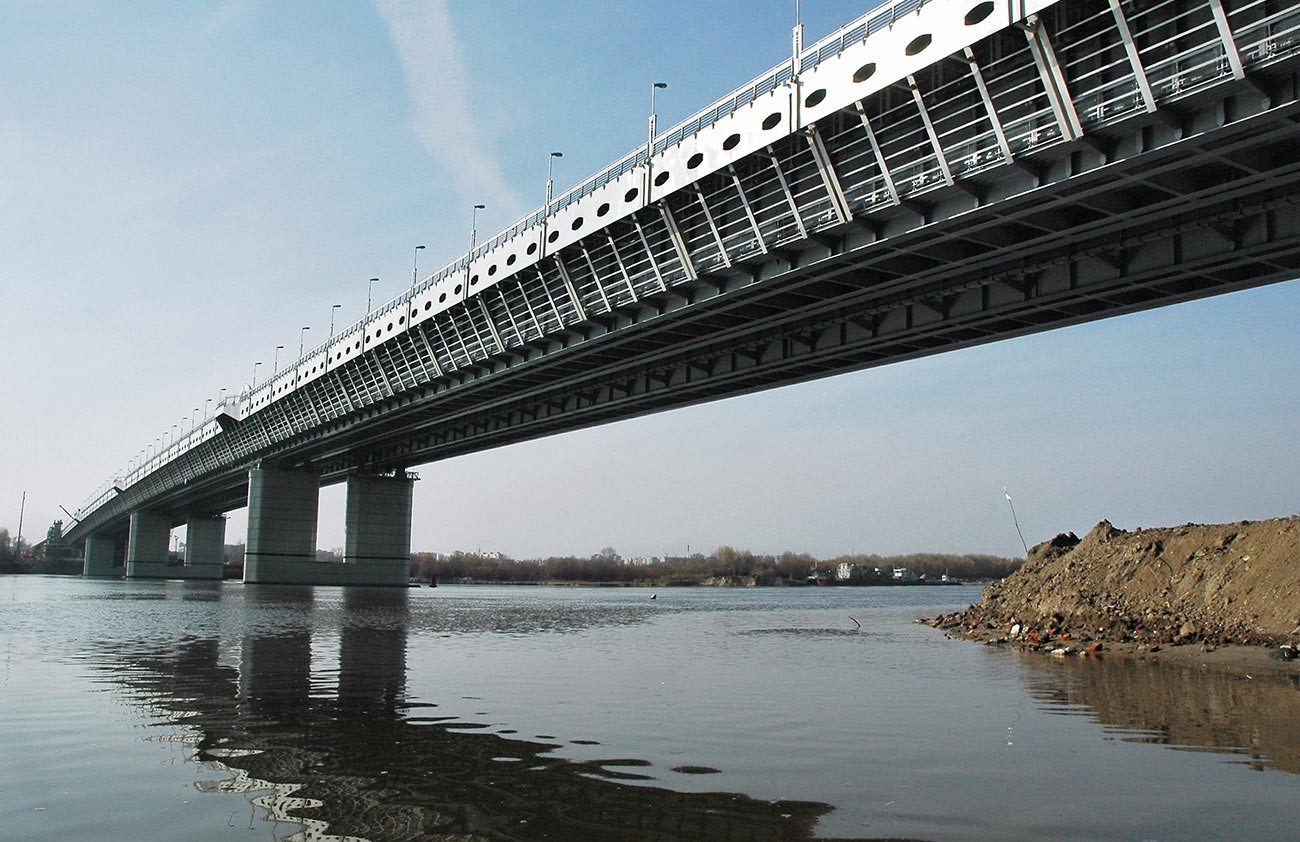 The first stage, consisting of six stations, was supposed to open in 1997, but the inauguration was repeatedly postponed due to a lack of funding. The plans kept changing and, in the end, after three decades had passed, only a few tunnels and a metro bridge were built, while the construction work on several stations had only begun.

Zarechnaya, Rabochaya and Tupolevskaya stations were mothballed at the foundation pit stage, and the sites were cleared for a couple more stations. 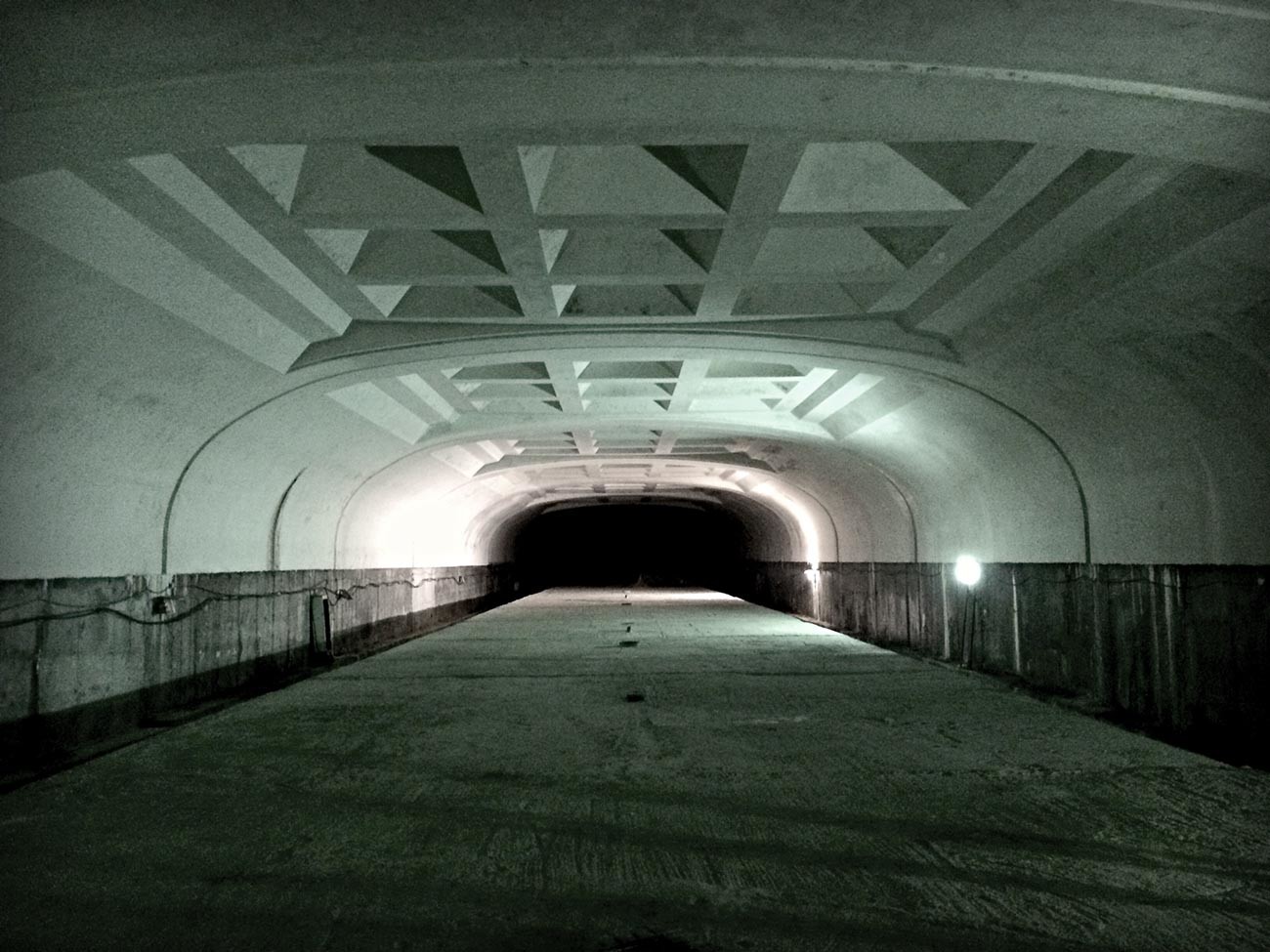 The Biblioteka Imeni Pushkina (Pushkin Library) station looks just like a real metro entrance, and almost everything inside was ready to go as well. But today the station is only used as an underpass, while plans for the station itself remain stalled. 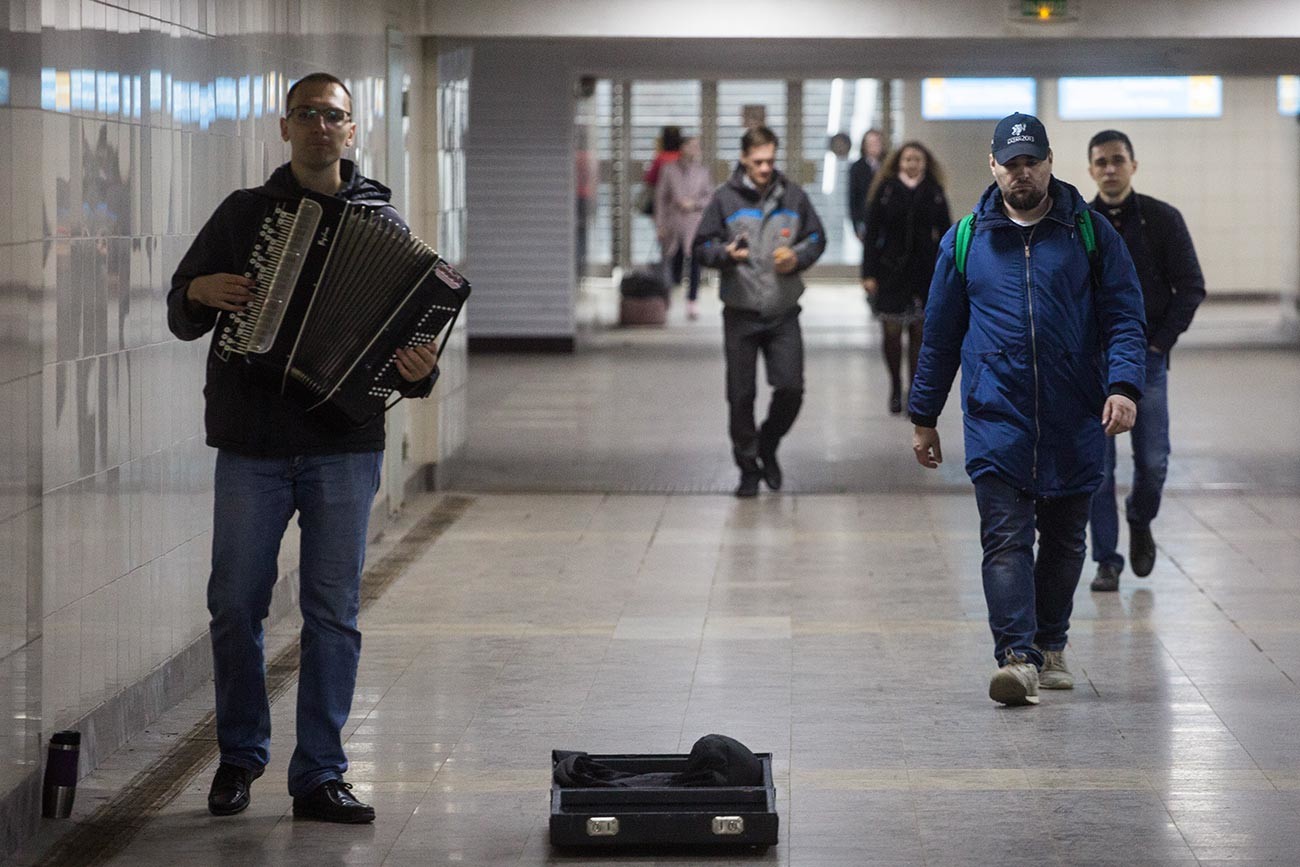 And while the city authorities are contemplating what to do with this unfinished project—which costs millions of rubles a year to maintain—local residents have turned the "metro" into a creative space. Young artists and designers now use the metro underpass as a location for conceptual installations on the burning issues of the day. A whole community, calling itself Project M, has sprung up with the purpose of looking for new ideas for exhibitions in the metro. Thus, in autumn 2020, a sculpture of a large bolt on a floor plaque appeared here, featuring the metro logo and the inscription: "Thank you for burying 13 billion rubles in the ground. 1992-?" 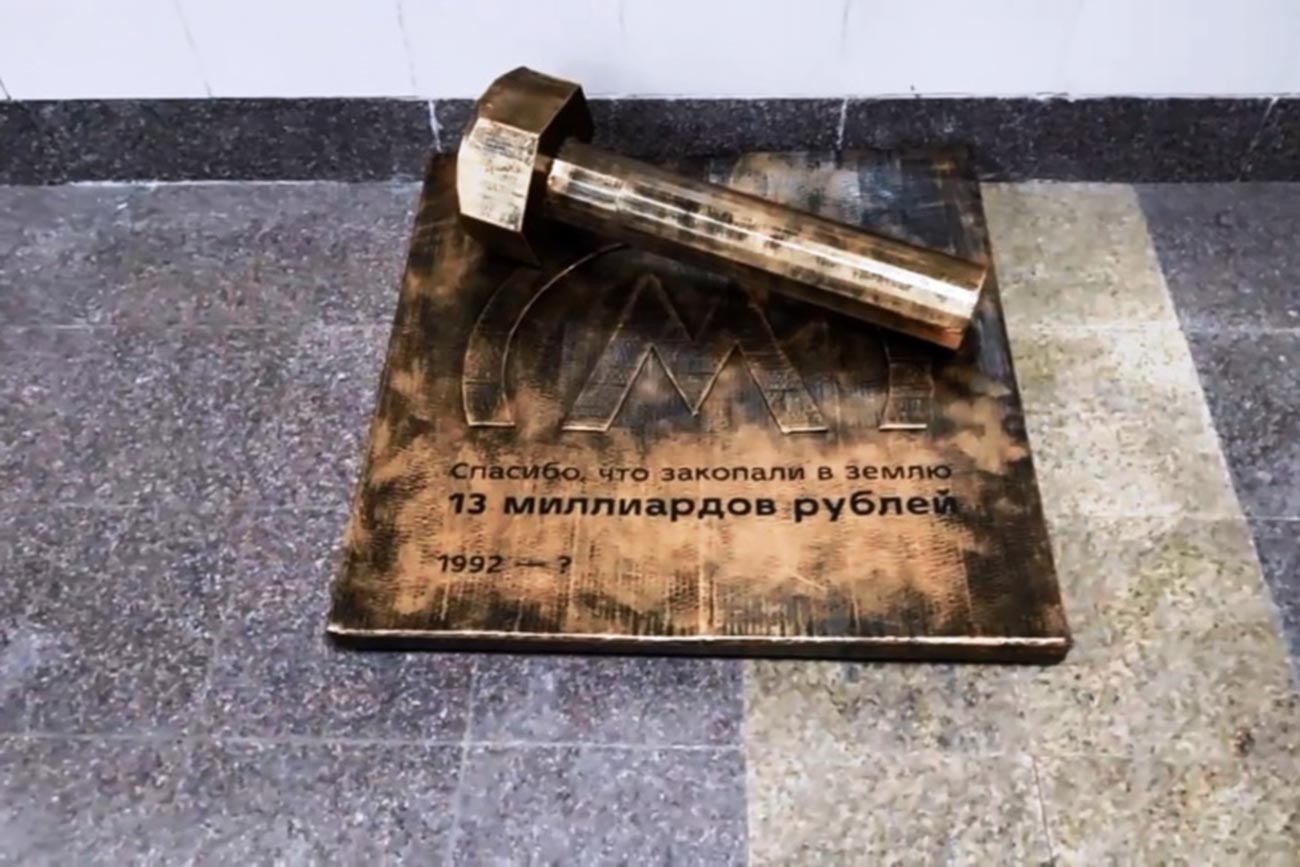 Another installation was dedicated to the birds of the Omsk Region—and not just to the local fauna, but also to the many local residents who had "flown away" from the city and come back. 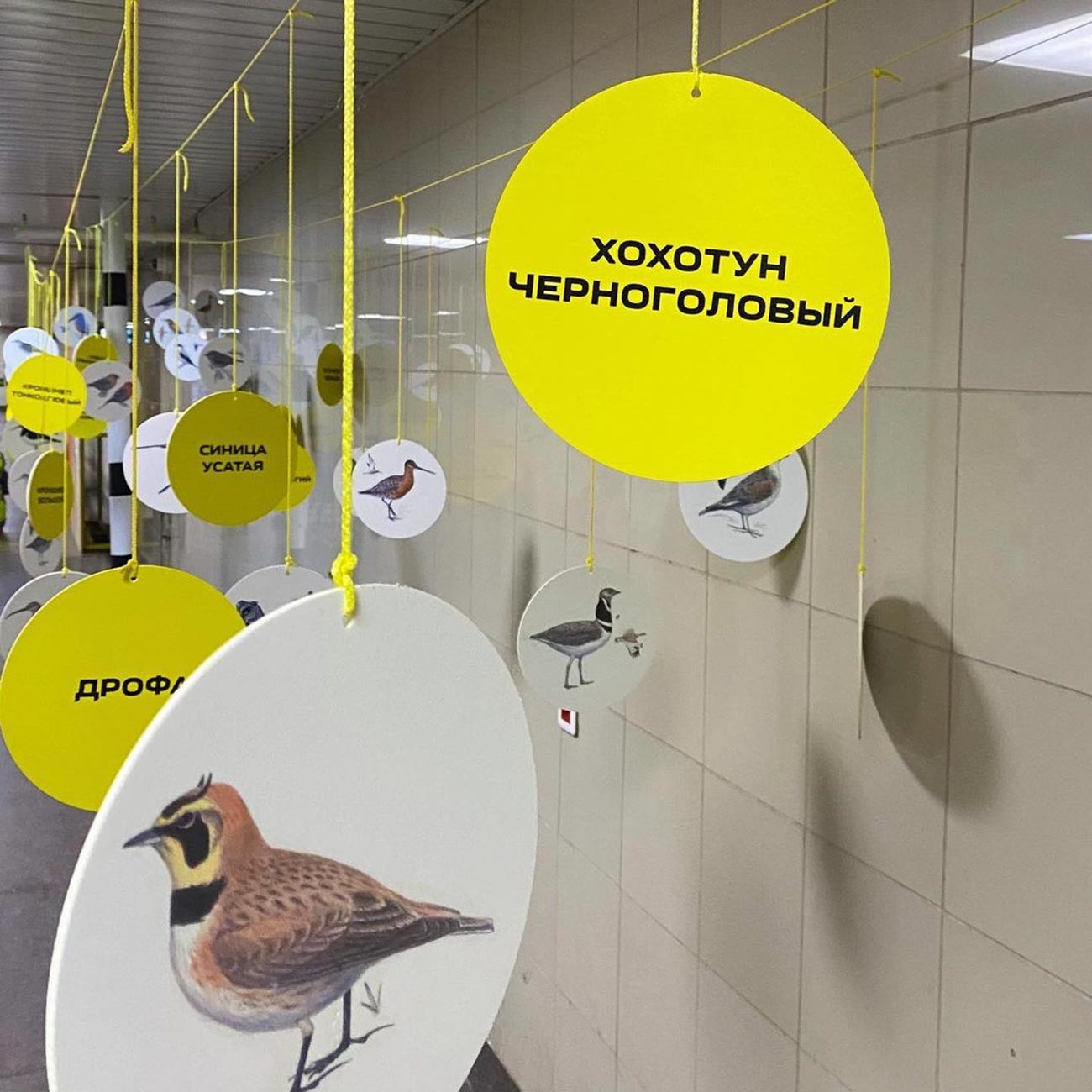 Full-fledged music and theater performances are sometimes put on in the underpass.

Alena Shapar, a designer and member of the Project M community, has even come up with a printed T-shirt design showing a pot of "Choice" noodles inscribed "Omsk Flavor" and bearing the logo of this metro that still hasn't materialized after almost three decades. These shirts are given to Project M artists, but Alena says she plans to make stickers using the same design so that each resident of Omsk can have one. 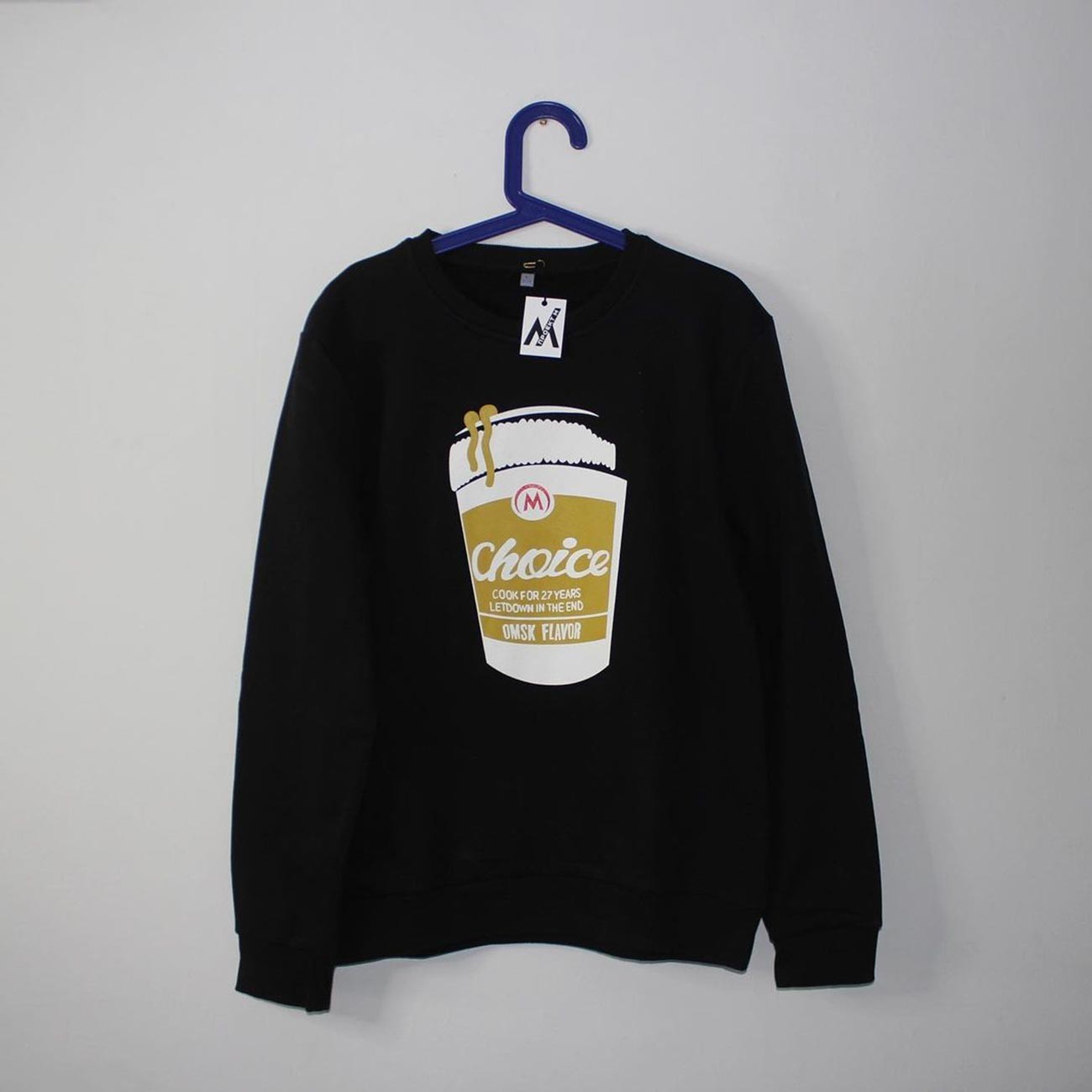 And in 2016, another local resident, Anton Oleynik, came up with the idea of tokens for travel on the metro. Initially he wanted to make a souvenir for a friend, but the idea was met with such enthusiasm and an unexpectedly large number of fans that Anton went ahead and made a batch of 300 to sell online. 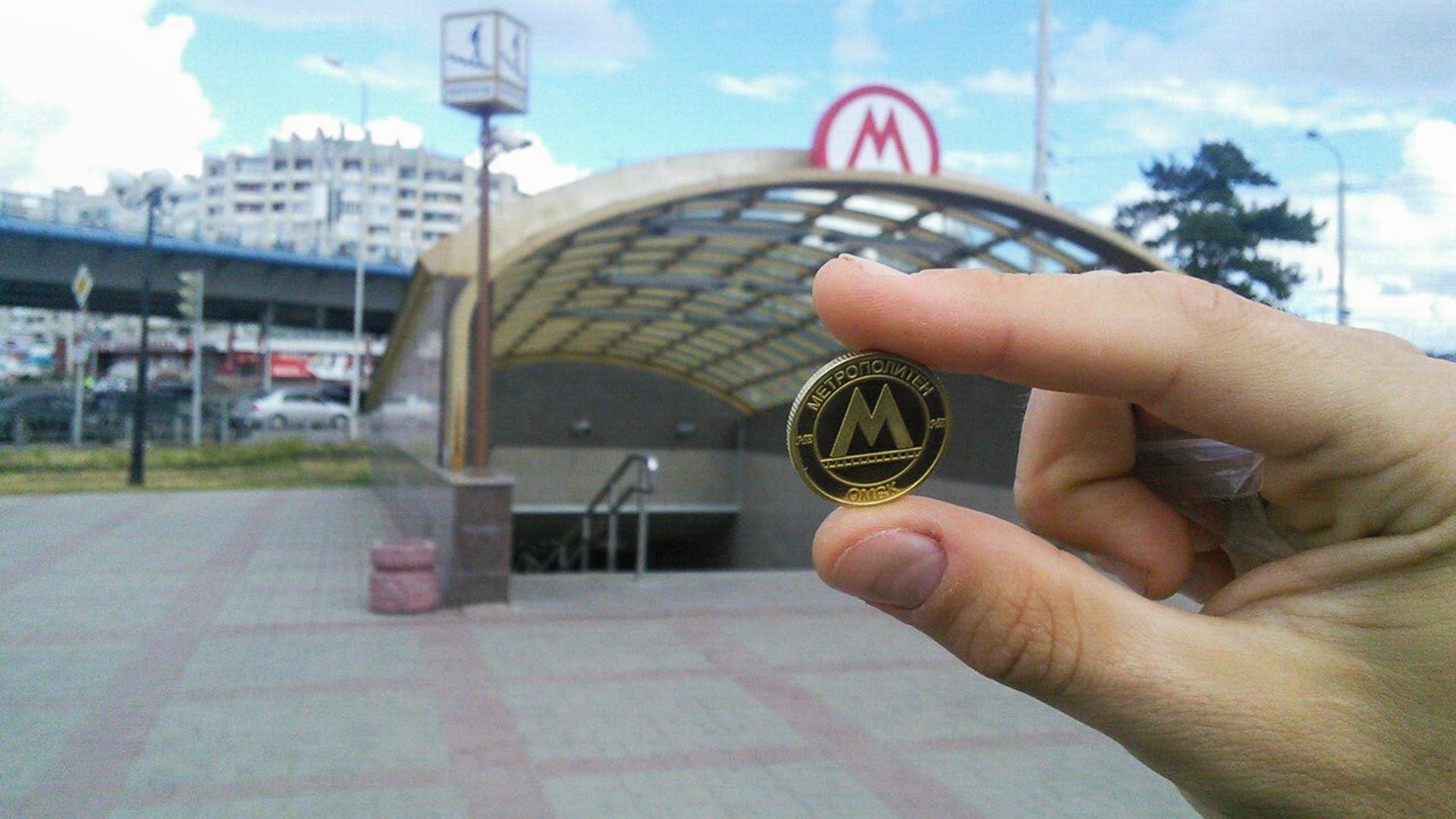 The Omsk metro also has its very own invented map, which is, as you can imagine, simple and easy to understand since there is just one station. As users quip in the comments, at least the metro is safe and has an impeccable and completely accident-free safety record. 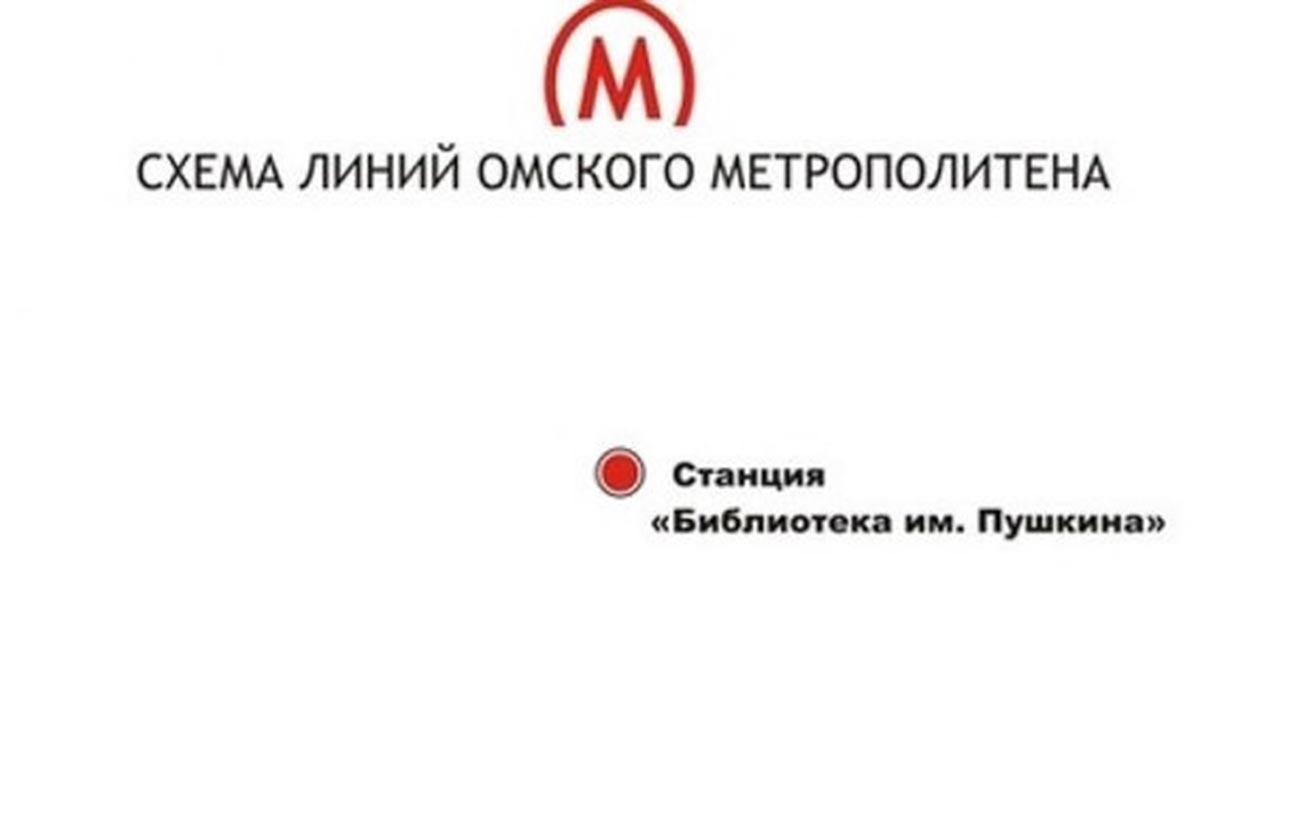 But local residents like to think ahead and plan for the future. One coffee shop decided to issue paper cups with a plan of the future metro lines so that passengers won’t get lost in the unfamiliar transport network. 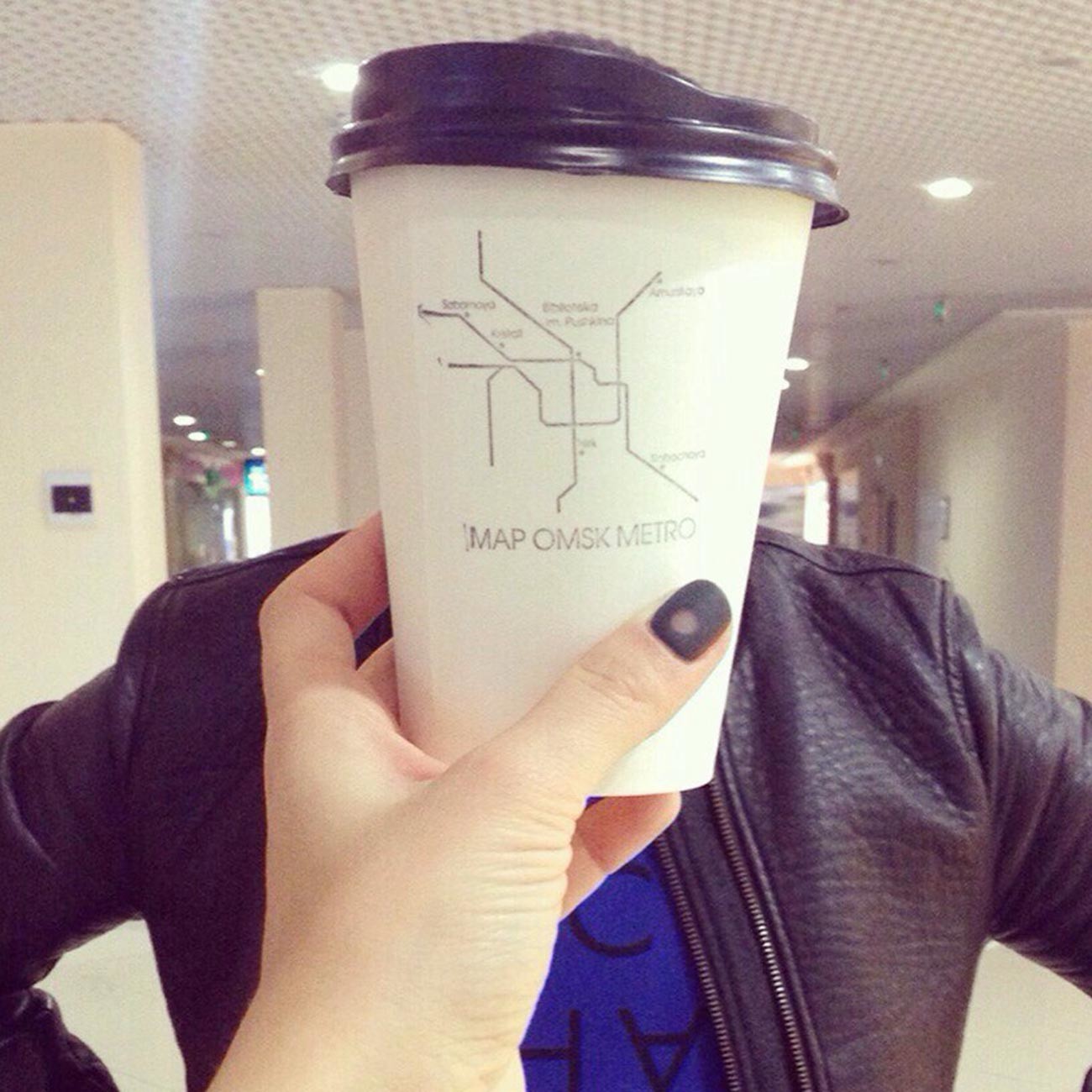 Programmers have even decided to develop a special smartphone app that shows journey times. Several years ago it said that the next train was arriving in "1,195 days and 18 hours," but app users were advised to check back later. 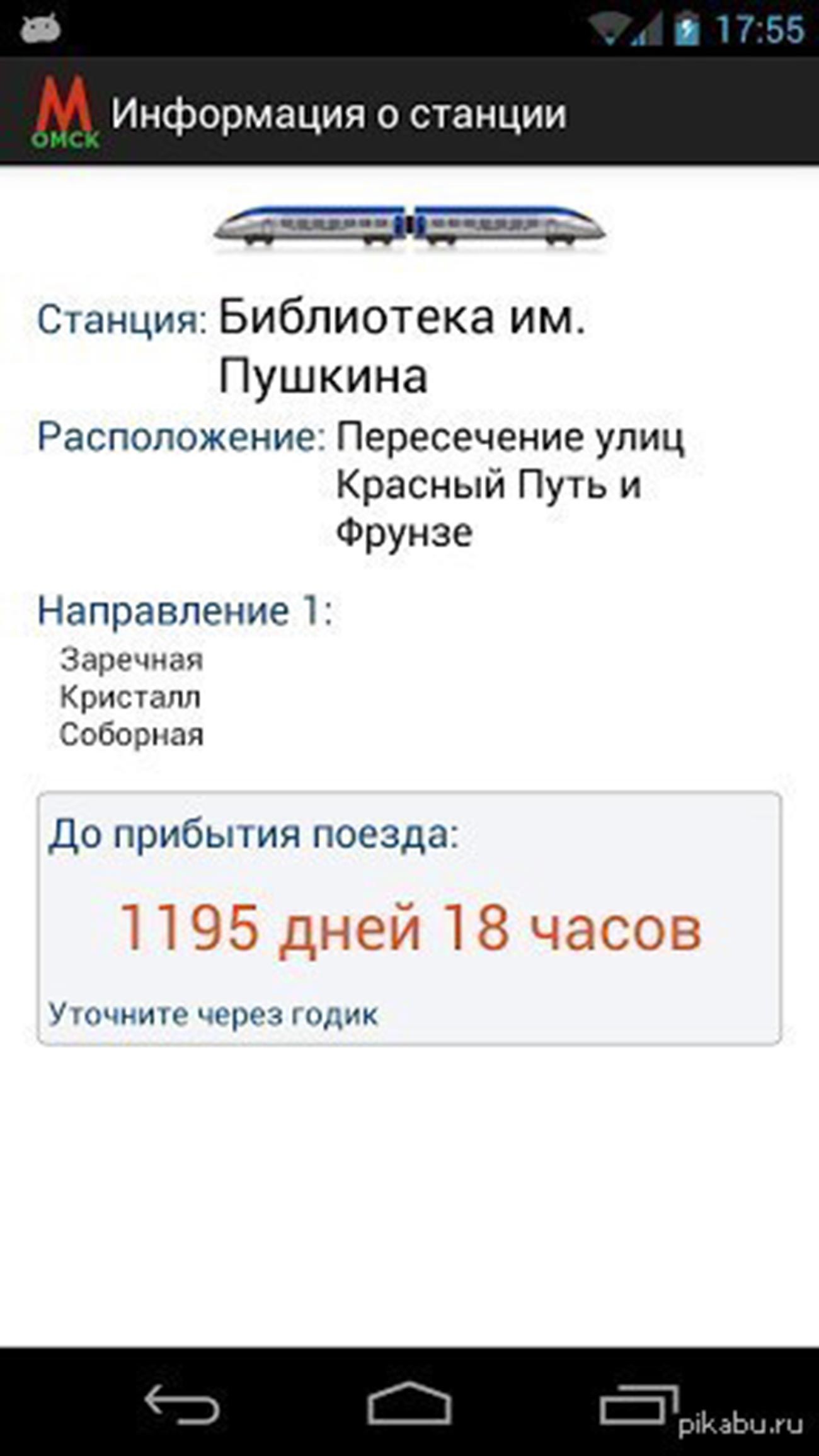 And following the news that the Biblioteka Imeni Pushkina station would be mothballed, a popular delicatessen store in Omsk started selling buns in the shape of the letter "M." They are called "MetroShish" ("shish" means "nothing" in Russian). 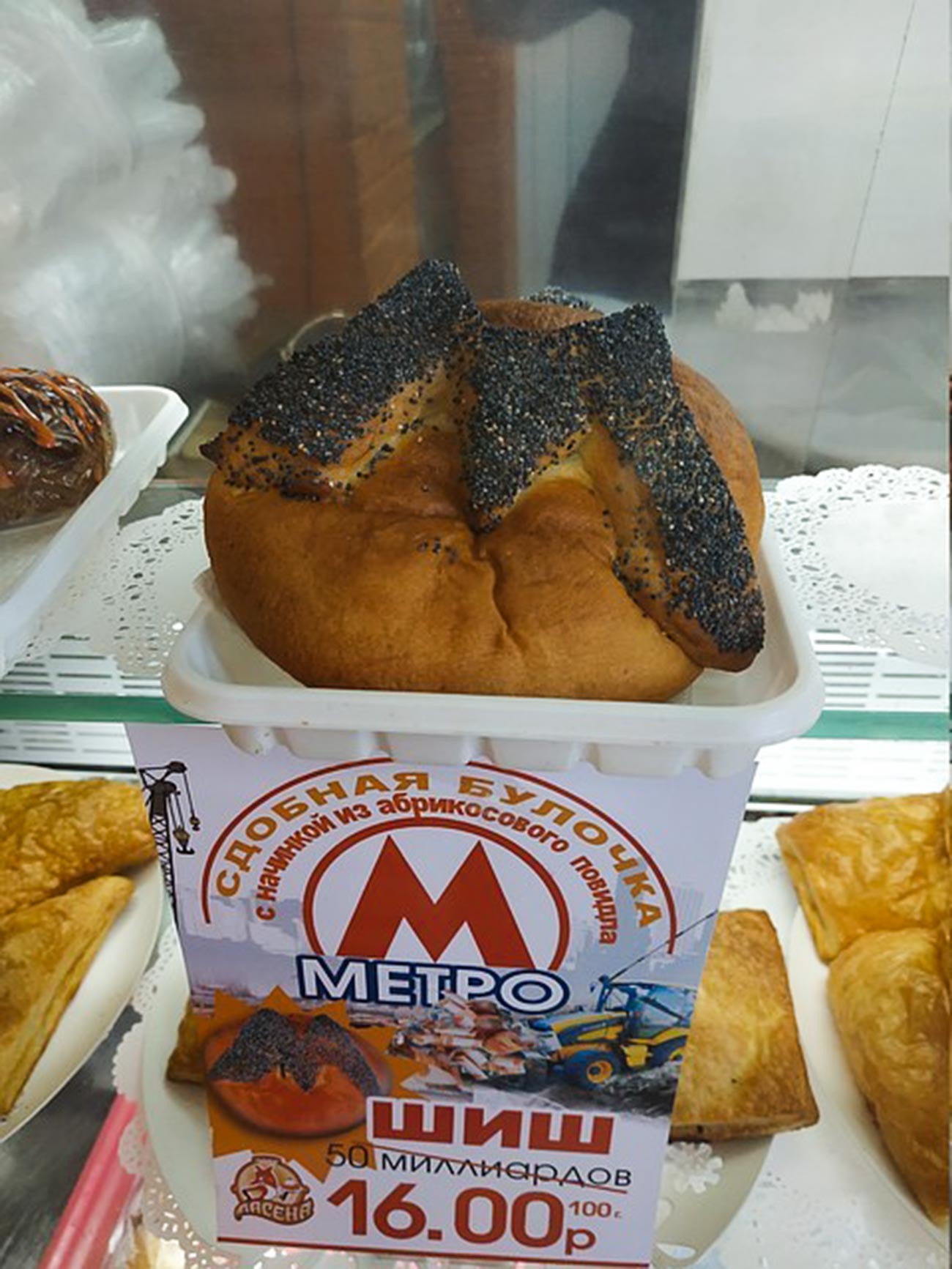