5 secrets of the Moscow Kremlin 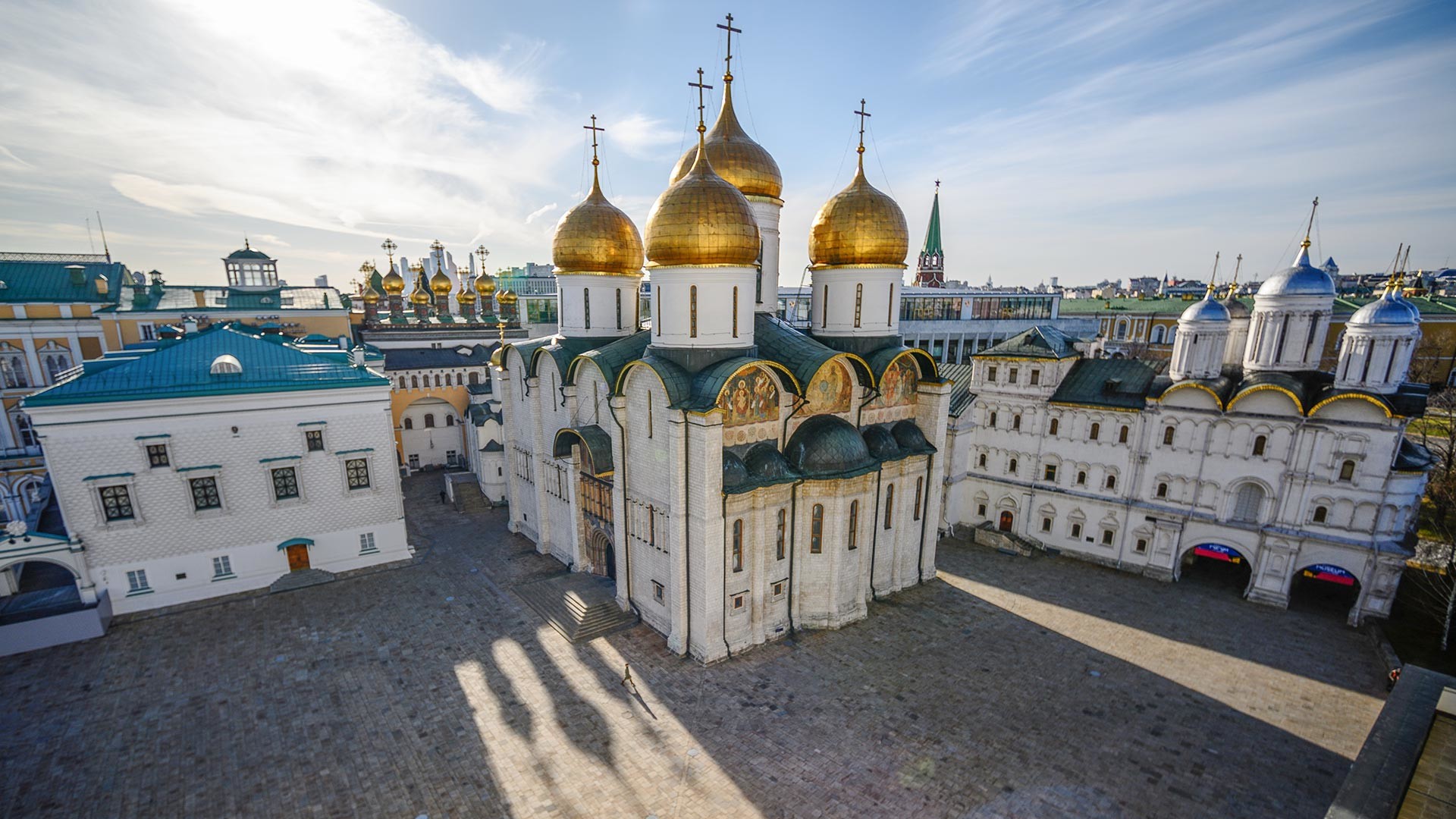 Vladimir Sergeev/Sputnik
The oldest street in Moscow, ancient frescoes that remained hidden for centuries and a chandelier made with church silver that was stolen by the French—here are some curiosities of the Moscow Kremlin that usually remain hidden from visitors.

1. Ancient frescos beneath the iconostasis 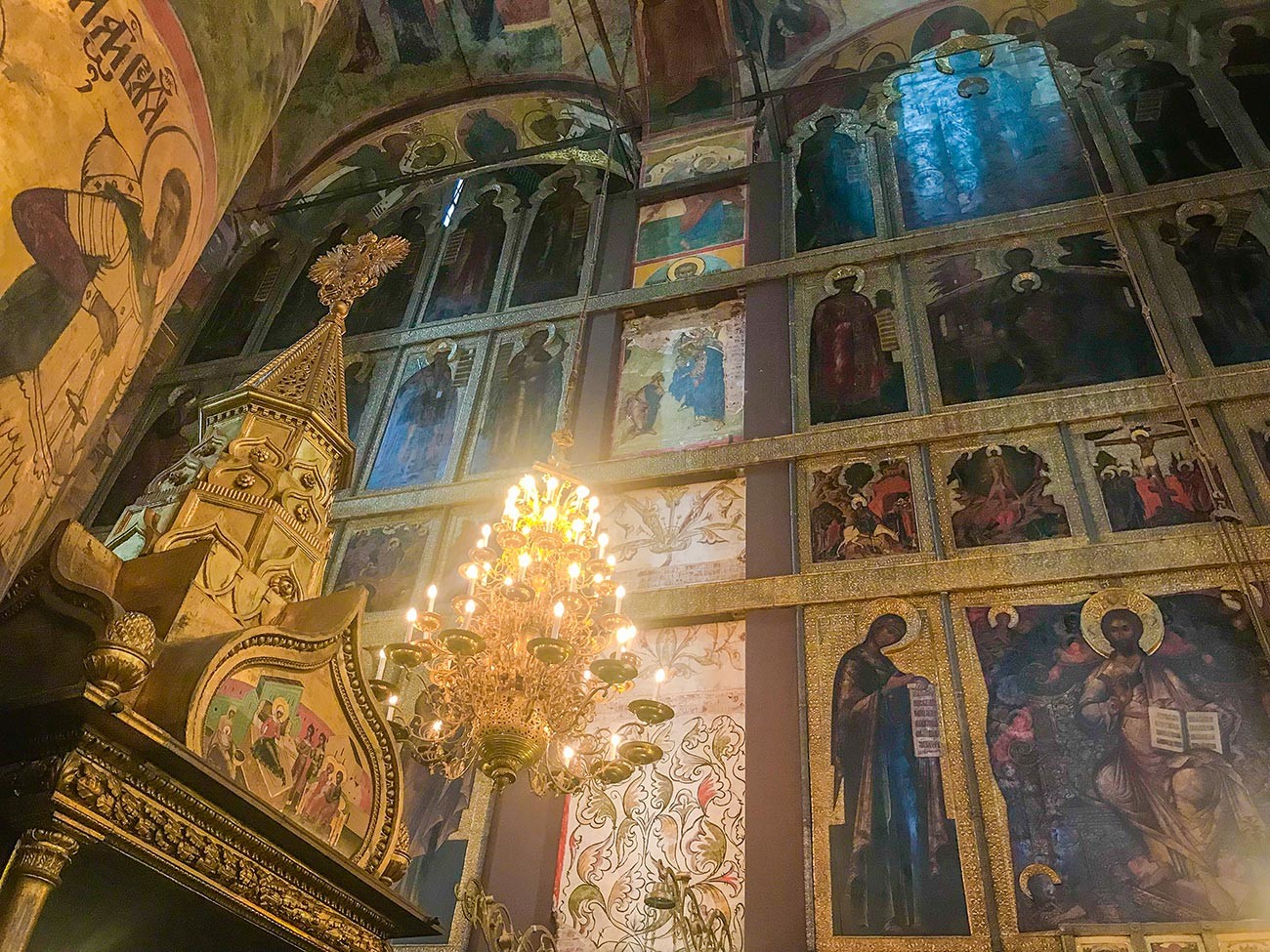 The Assumption Cathedral, which was built in the late 15th century, is the Kremlin's main church and the site where Russia’s rulers were crowned. The cathedral was badly damaged in a fire in 1626, and then in 1642-1643 Tsar Mikhail Fyodorovich issued an order to remove its old frescoes and repaint its walls.

Can you imagine the surprise of present-day conservation experts when they discovered ancient frescos hidden beneath the iconostasis? “We found three tiers of ornaments without inscriptions and above them medallions with images of saints,” says the cathedral's curator Alexei Barkov. “The two upper compositions date back from 1643, like most of the paintings in the cathedral. But the lower ones were created either in the late 15th century, when the first iconostasis was painted, or in 1515, when the painting work inside the cathedral was completed."

One of the frescoes still has traces of the fittings of the first iconostasis, hinting at how the frescoes may have survived: Most likely, they were simply too difficult to remove. Conservators will continue searching for ancient frescos on the other side of the cathedral.

2. A chandelier made of stolen silver 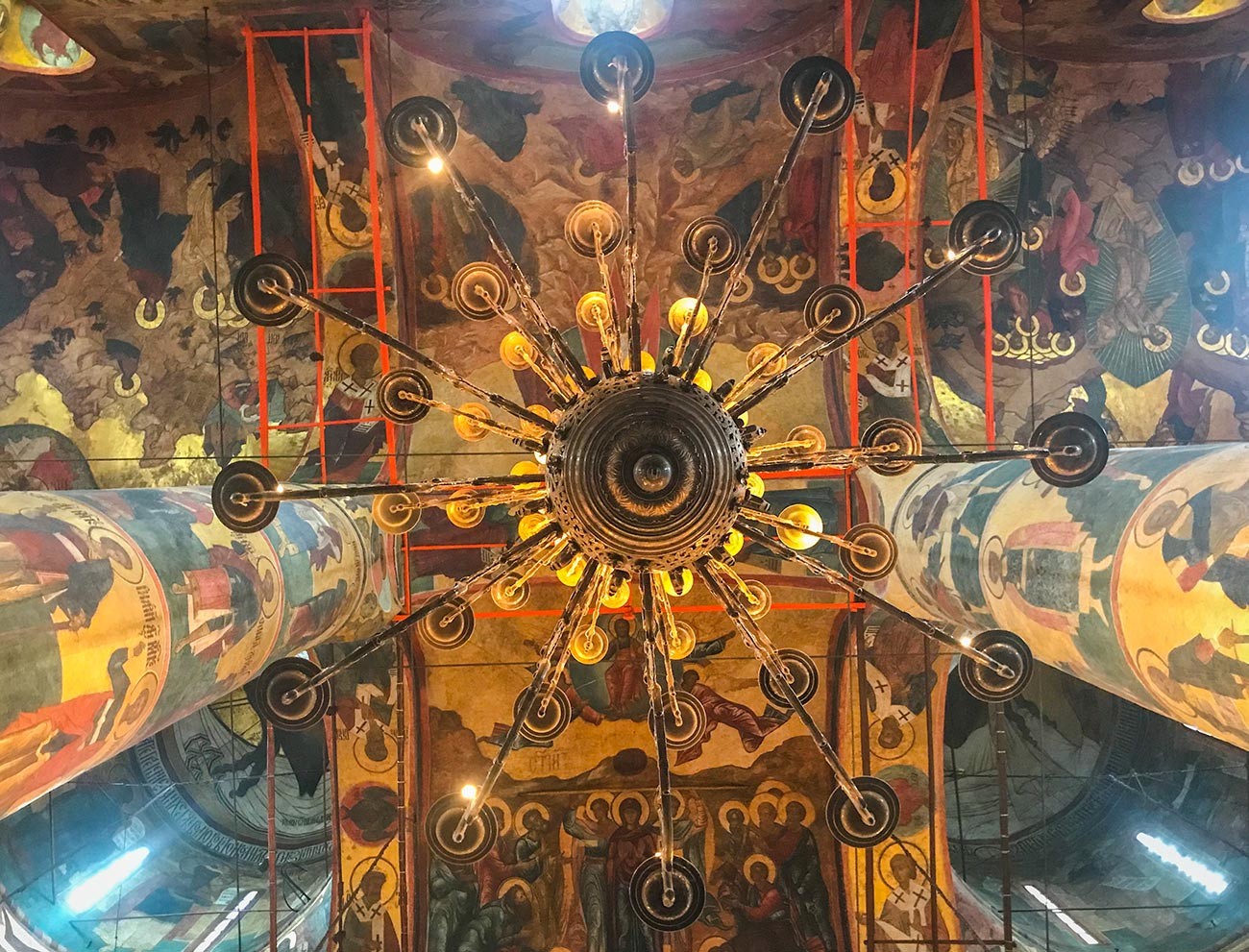 When Napoleon's army invaded Moscow in 1812, almost all the silver from the Assumption Cathedral disappeared. Only the tomb with the relics of Metropolitan Jonah remained. Legend has it that the saint appeared before the French waving his fist, and so they decided not to risk it. As Napoleon's army was retreating, the loot (around 300 kg of silver!) was recaptured and returned to the cathedral. It had already been melted down by then, so in 1817 a church chandelier decorated with images of flowers and vines was cast from it. It can still be seen in the Assumption Cathedral. 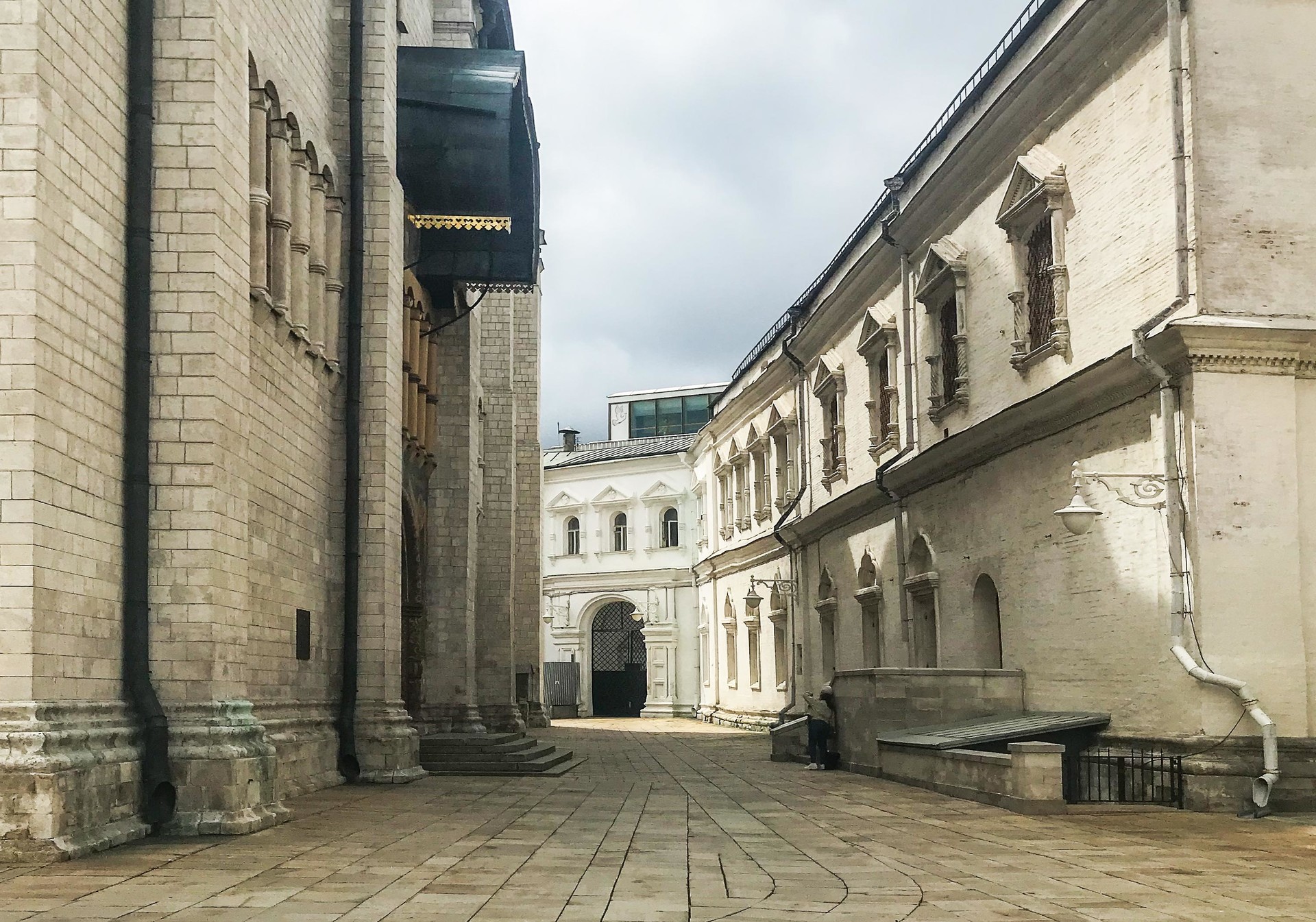 Several centuries ago, the territory of the Moscow Kremlin was filled with the dwellings of boyars and merchants, monastery courtyards and official apartments. It was full of narrow streets lined with a motley assortment of buildings. Beginning during the reign of Ivan III, the Kremlin became a scene of nearly constant construction: new streets were laid, old buildings were demolished and new ones erected, monuments were installed and removed. The Kremlin today is all about spacious squares and green areas, but you can still find one unnamed ancient little street that has survived here. Located between the Patriarchal Chambers and the Assumption Cathedral, it leads from Cathedral Square to the central entrance to the cathedral. Curious what the Kremlin was like hundreds of years ago? You can orient yourself based on the cross to the left of the Assumption Cathedral. 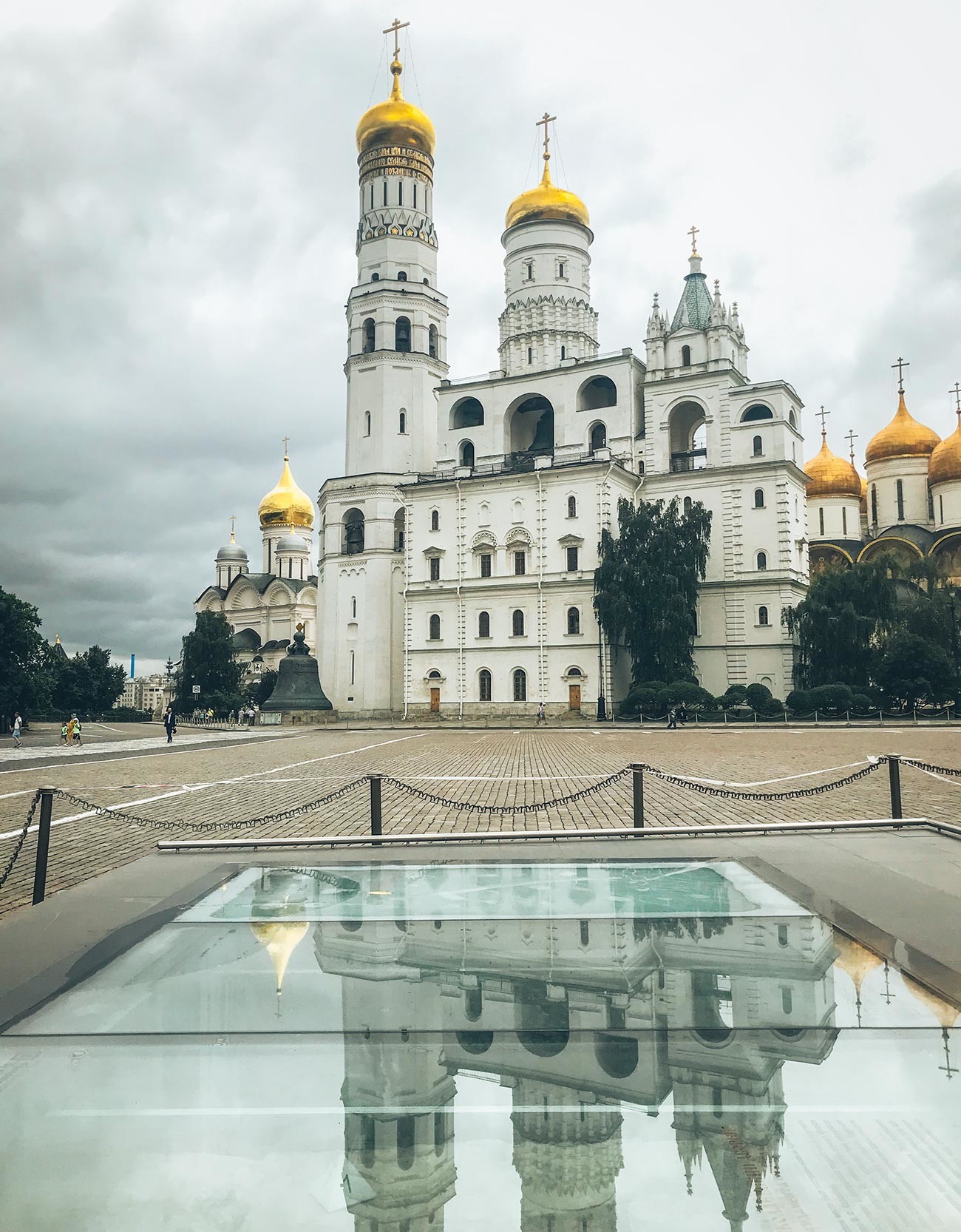 The Kremlin lost many of its architectural monuments in the first decade after the 1917 revolution and during the numerous reconstructions before it. Interesting artifacts remain on the sites where some of these buildings stood. For example, fragments of the foundation of the Small Nicholas Palace, which Emperor Nicholas I liked to visit, can be seen on the square opposite the Tsar Bell. Under a glass case not far from there, you can find fragments of the Chudov Monastery, which was destroyed in 1929. A new underground museum is due to open soon behind these archaeological sites. 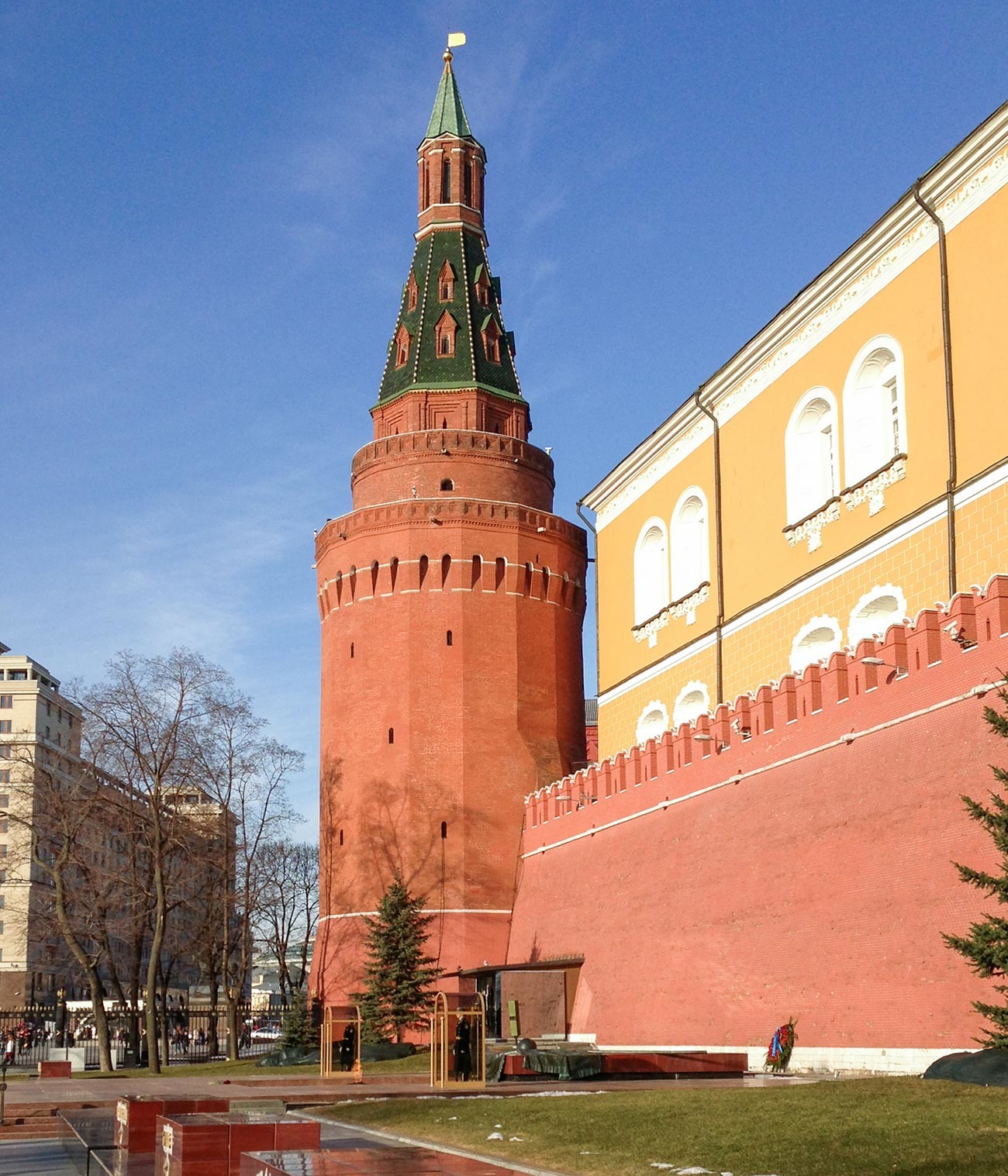 The Corner Arsenal Tower, which is located next to the Tomb of the Unknown Soldier, houses the Kremlin’s only surviving well and one of the oldest wells in Moscow. The tower was built in the late 15th century on the site of a spring in order to provide the fortress with water in the event of a siege. However, the spring turned out to be quite temperamental, and on several occasions its water level rose so much that it flooded the entire building. It was only in 1975 that Soviet scientists figured out how they handled this issue in ancient times. It turns out there was a gallery leading from the well to the Neglinka River, which already ran underground then, and this is where excess water was drained. When the gallery became clogged with debris, the spring would flood the tower. Nowadays, the well is no longer in use, although technically it still works and drains water into the Neglinka. The well is closed to tourists for safety reasons.