Lyadiny: Memories of magic and mystery in northern folk culture

Travel
William Brumfield
Historian and architectural expert Willam Brumfield discovers some of the “heavens” of the Russian North. 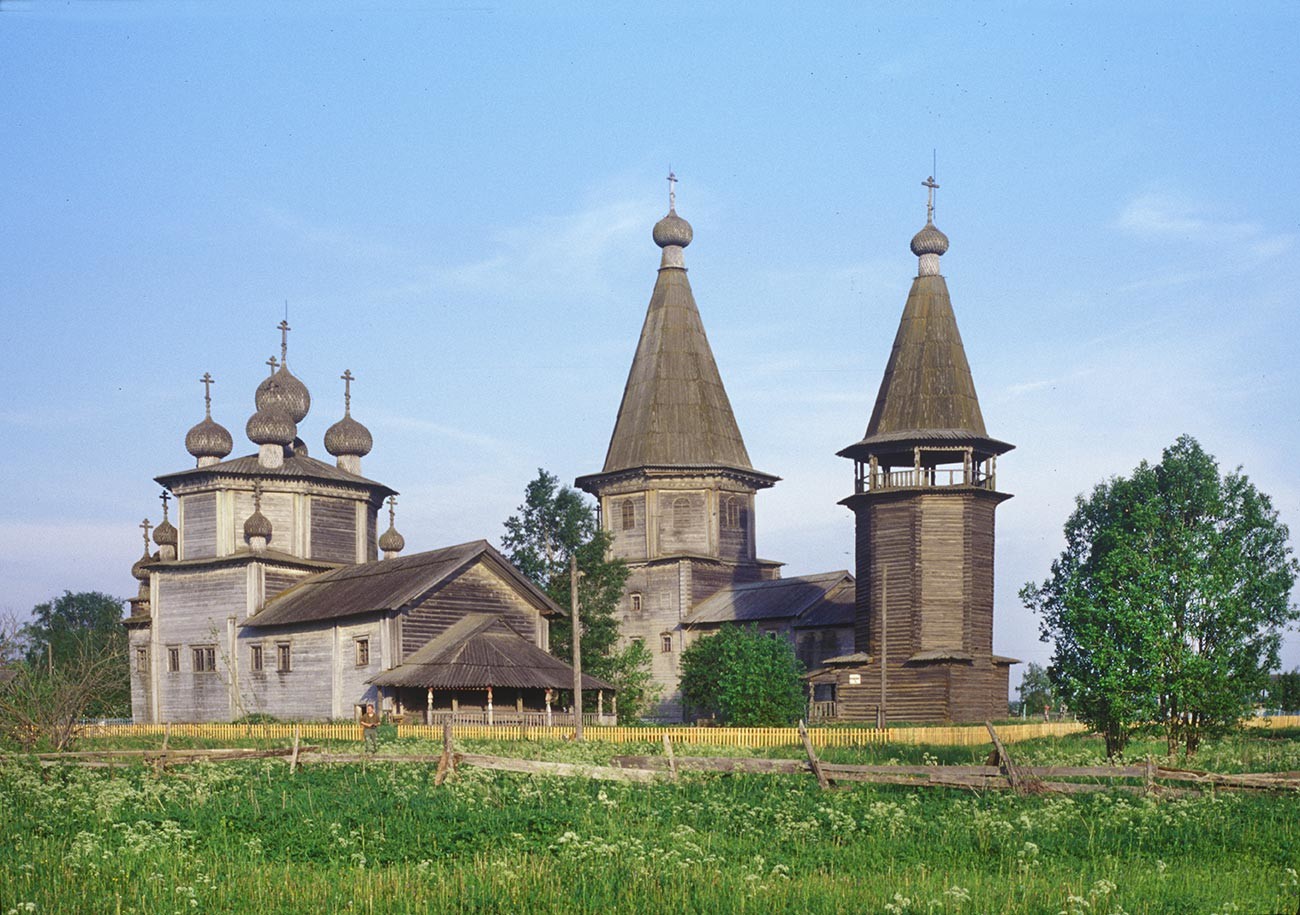 In June and July of 1909, Russian photographer and chemist Sergey Prokudin-Gorsky photographed a number of small towns along the Mariinsky Waterway in northwestern Russia. Initiated by Peter the Great to connect St. Petersburg south to the Volga River basin, this strategic waterway was further developed during the reign of Emperor Paul (1796-1801), who named it the Mariinsky Canal in homage to his consort, Empress Maria Feodorovna.

A major point on Prokudin-Gorsky’s Mariinsky itinerary was the town of Vytegra, located on the Vytegra River. Vytegra not only served as an administrative center along the great waterway, but it also led to more remote points in the vast territory of the Russian North.  While at Vytegra, Prokudin-Gorsky photographed distinctive examples of traditional wooden architecture in the nearby villages of Ankhimovo and Paltoga. As my publications on these villages show, much that he recorded there no longer exists or has changed in significant ways. 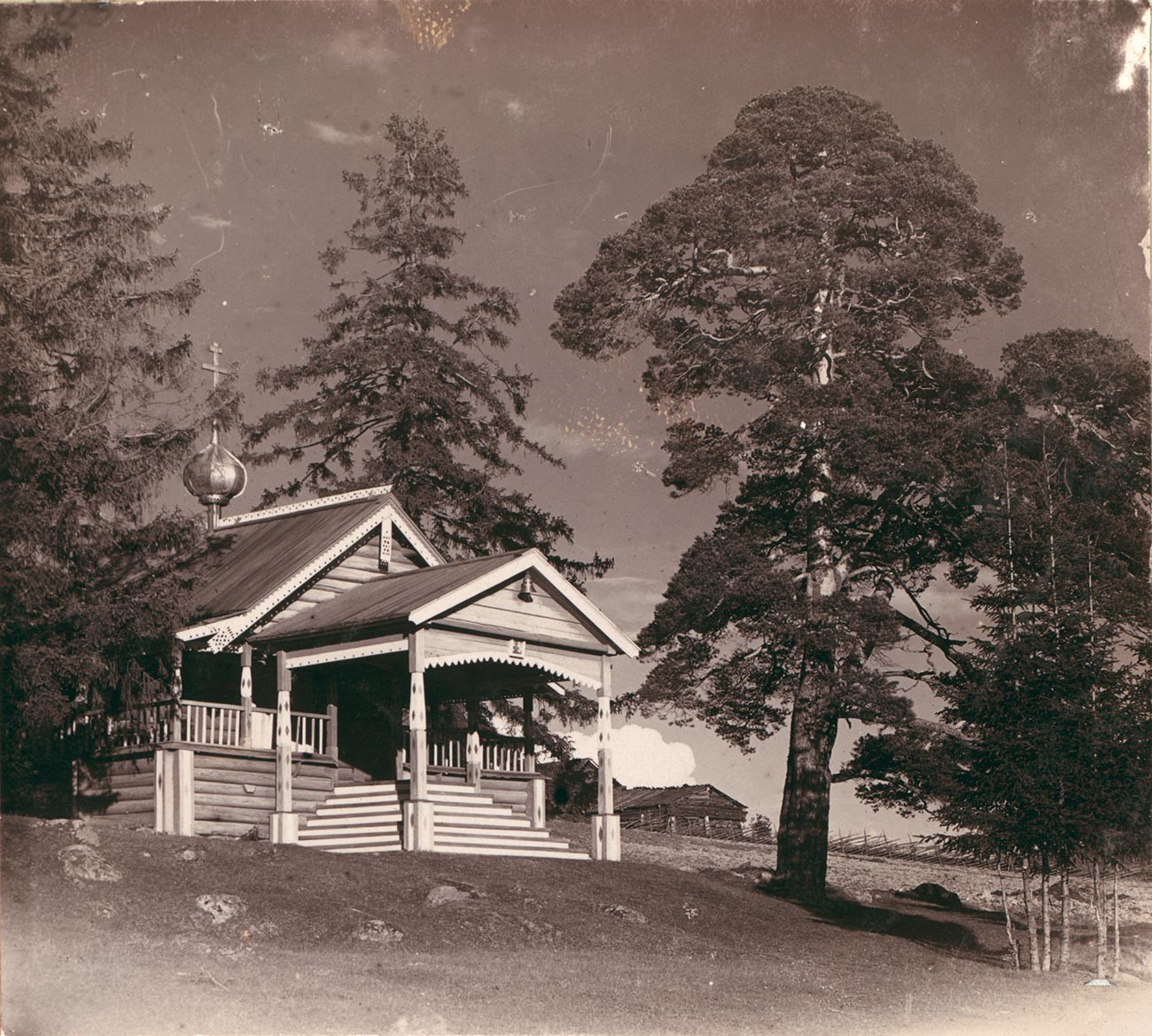 For example, in 1909 he photographed the Chapel of St. Paraskeva Pyatnitsya in the village of Materiki, once located on the Mariinsky Canal a few miles to the south of Vytegra. Materiki and its charming chapel were submerged after the war with the creation of the Belousov Reservoir (a link in the Volga-Balt Canal). Fortunately, I have photographed similar chapels farther to the north, for example in the Kenozero National Park in the Plesetsk region of Arkhangelsk Province. 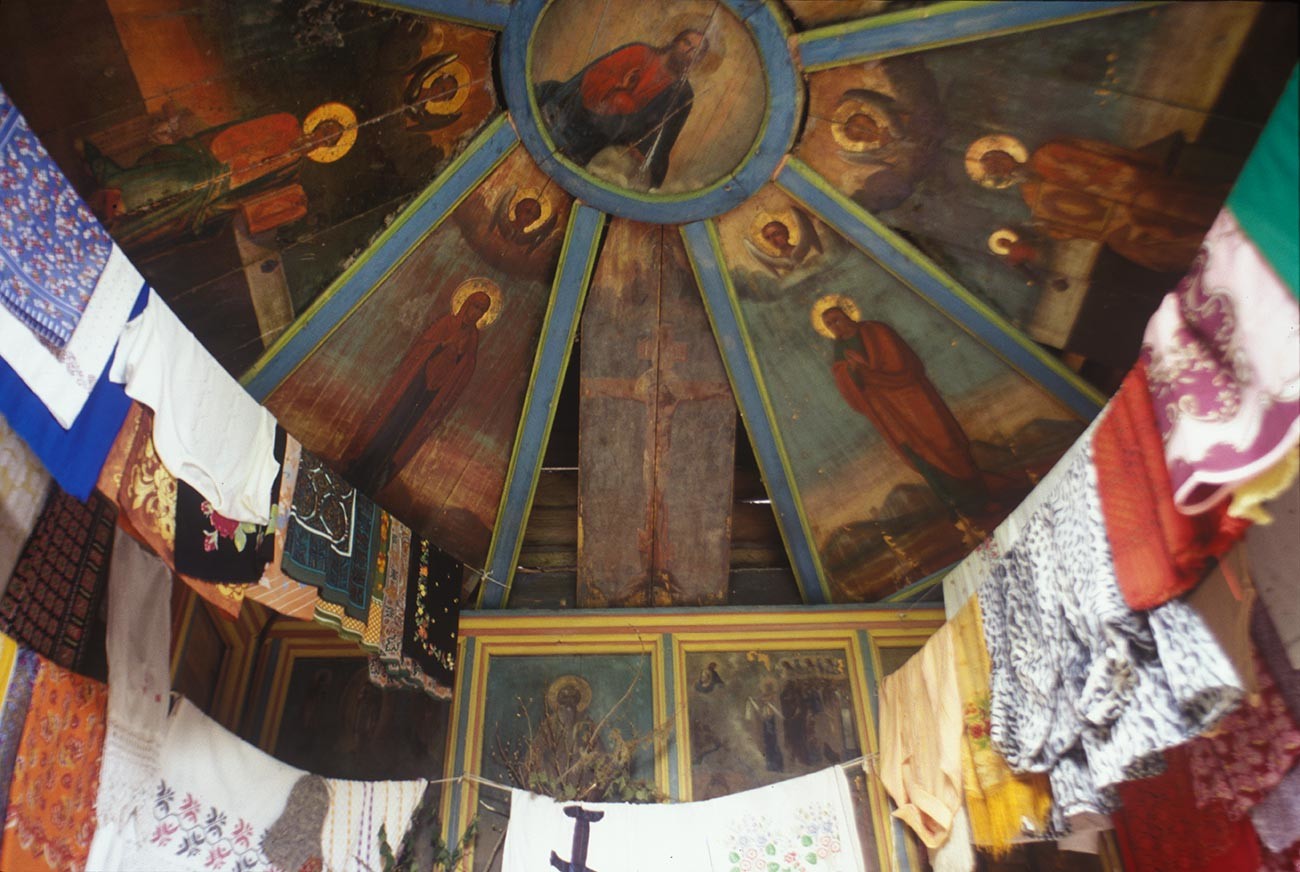 Fominskaya (next to Lyadiny). Chapel of the Miraculous Icon of the Savior. Interior with painted ceiling (nebo). June 16, 1998

In my memory, however, the most appealing such chapel is located slightly over 60 miles northeast of Vytegra at the hamlet of Fominskaya, part of the larger village of Lyadiny (officially also referred to as Gavrilovskaya) in the Kargopol district. In that region, villages can consist of multiple hamlets connected by a road or path.

I had seen the tiny log chapel, apparently dedicated to the Icon of the Miraculous Image of the Savior, in 1998 while photographing the larger church ensemble in Lyadiny, yet access to the chapel was for various reasons closely guarded by the local community. Nonetheless, my request was discreetly circulated, and one evening I was summoned by an elderly woman in a kerchief who held the key. I understood the great trust extended to me, and as she opened the heavy door, there was a sense of entering another dimension. 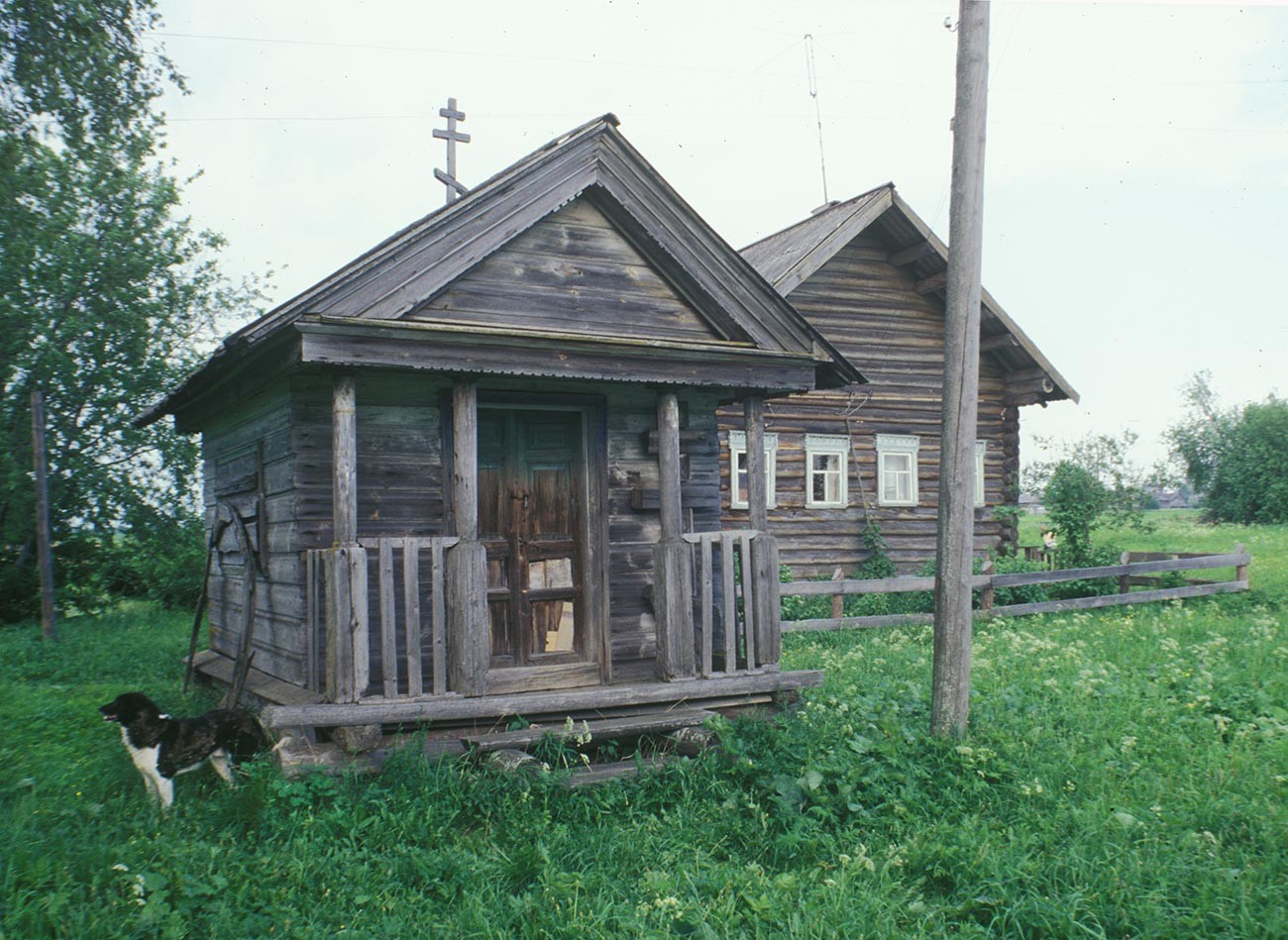 Fominskaya. Chapel of the Miraculous Icon of the Savior. June 16, 1998

The small interior was dimly lit in the evening summer light, but the burst of color was palpable. Even without a tripod, I was able to brace the camera for a few precious shots of the space.

The warm colors came primarily from a wooden ceiling composed of painted boards radiating from a central ring. The center ring contained the image of Christ, while the surviving boards depict Christ on the Cross flanked by Mary and John the Baptist, as well as the archangels and the Evangelists.

This chapel shows a simplified example of a type of painted ceiling known as a nebo (“heaven”) that appeared in a large territory of the Russian North during the 18th and 19th centuries. A much larger, more complex nebo was contained in the Intercession Church at Lyadiny (see below). 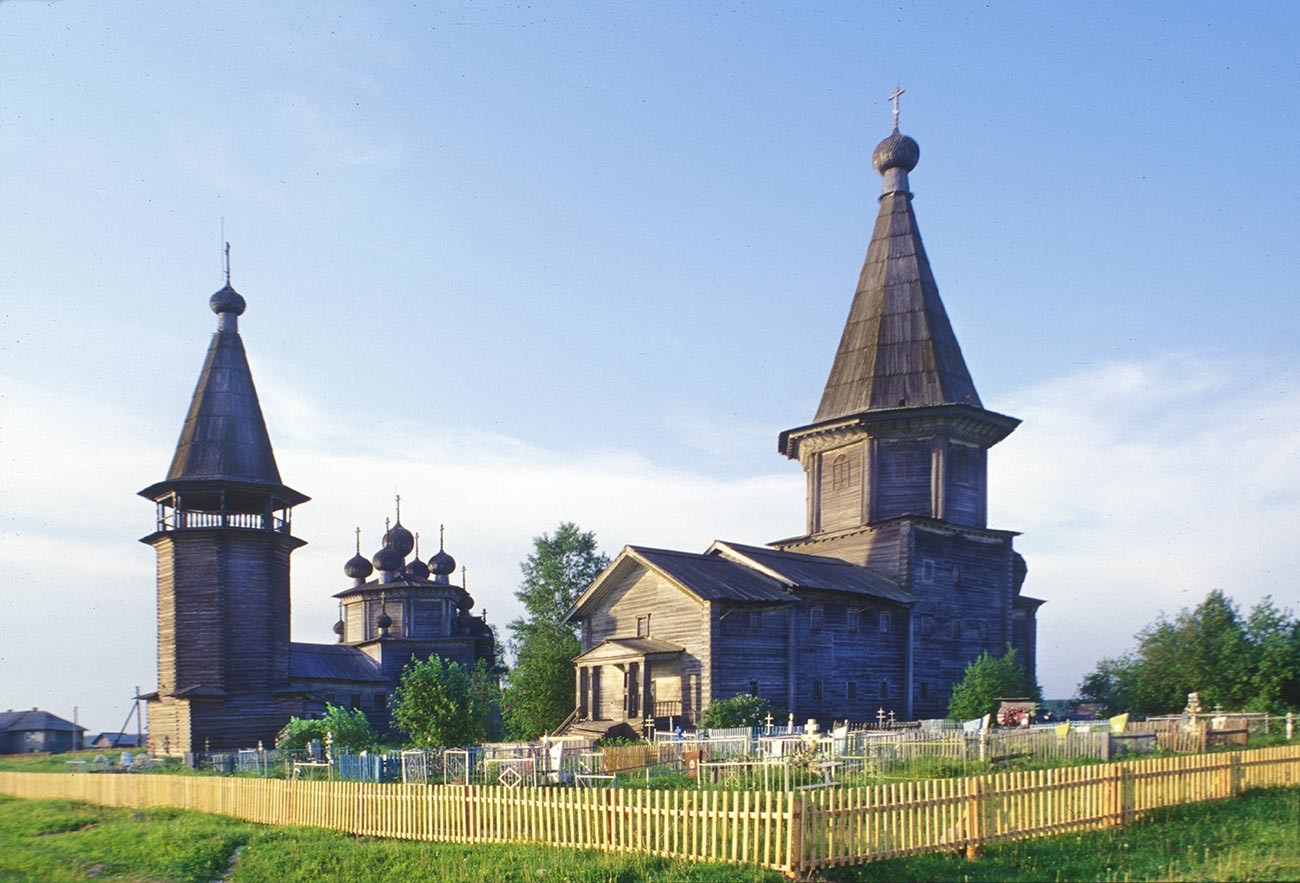 The chapel was equally remarkable for the clothes and other textile items that draped the sides of the interior beneath the nebo. As part of a folk tradition, they served as votive offerings, petitions for divine succor against bodily ailments touched by the cloth. Indeed, the Miraculous Image of the Savior (to which the chapel is dedicated) refers to just such a healing miracle.

Although documentation about the construction of the chapel is missing, it was likely built no earlier than the end of the 19th century. Even during the Soviet period, when public worship was highly restricted (if not banned outright), the chapel was protected and used by the dwindling community. 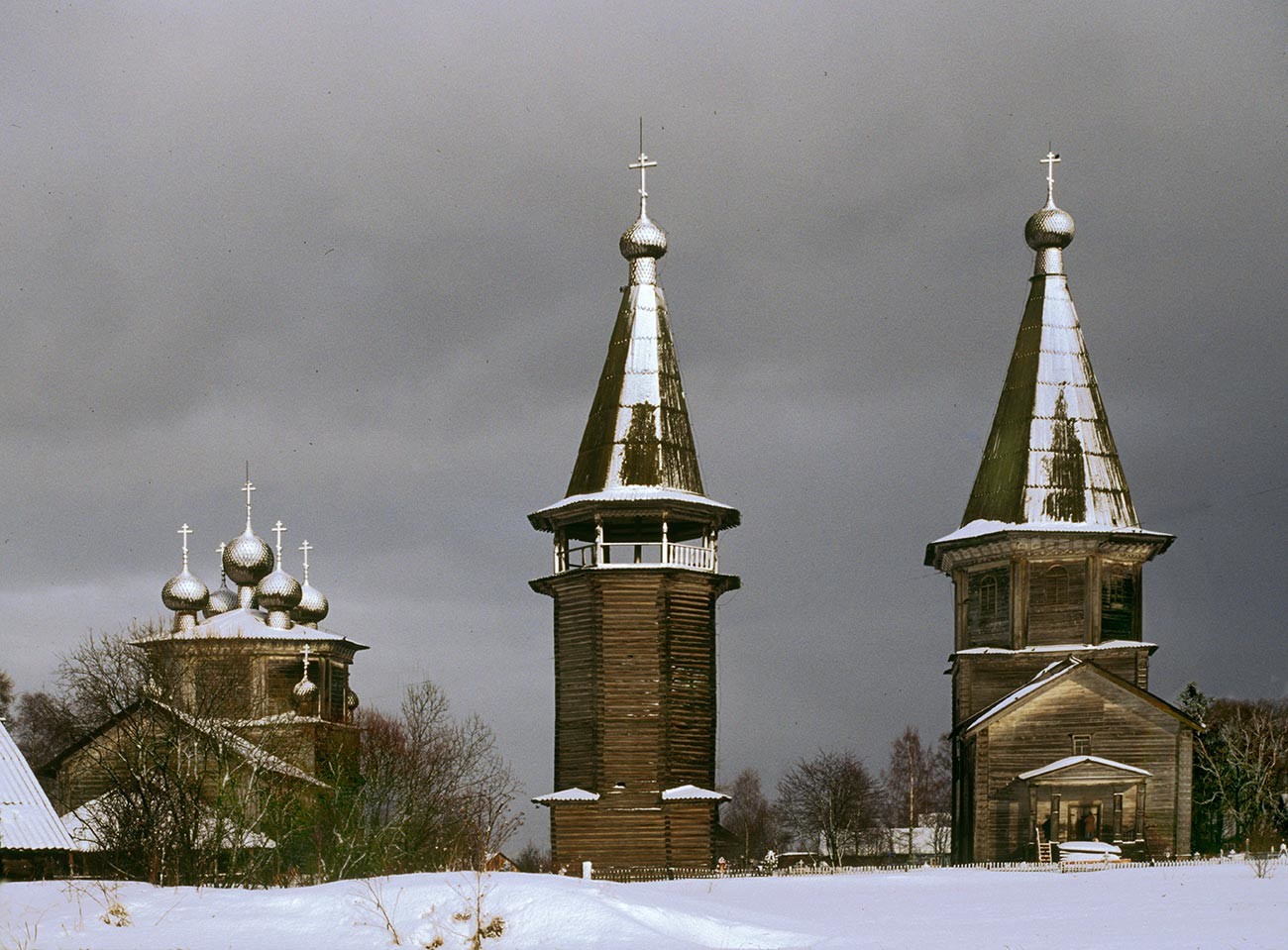 Before the Soviet period, however, the center of worship was in Lyadiny proper, which had one of the great architectural monuments of the Russian North. Although only a part of that creation has survived, I was fortunate to have photographed the entire ensemble on multiple occasions in the late 1990s, before tragedy struck in the most literal sense.

The Lyadiny ensemble consisted of three parts: the Church of the Intercession with its soaring “tent tower” (completed by 1761); the nearby Church of the Epiphany (1793), crowned with a panoply of cupolas; and a large bell tower built in 1820. There was also a cemetery enclosed with a fence. 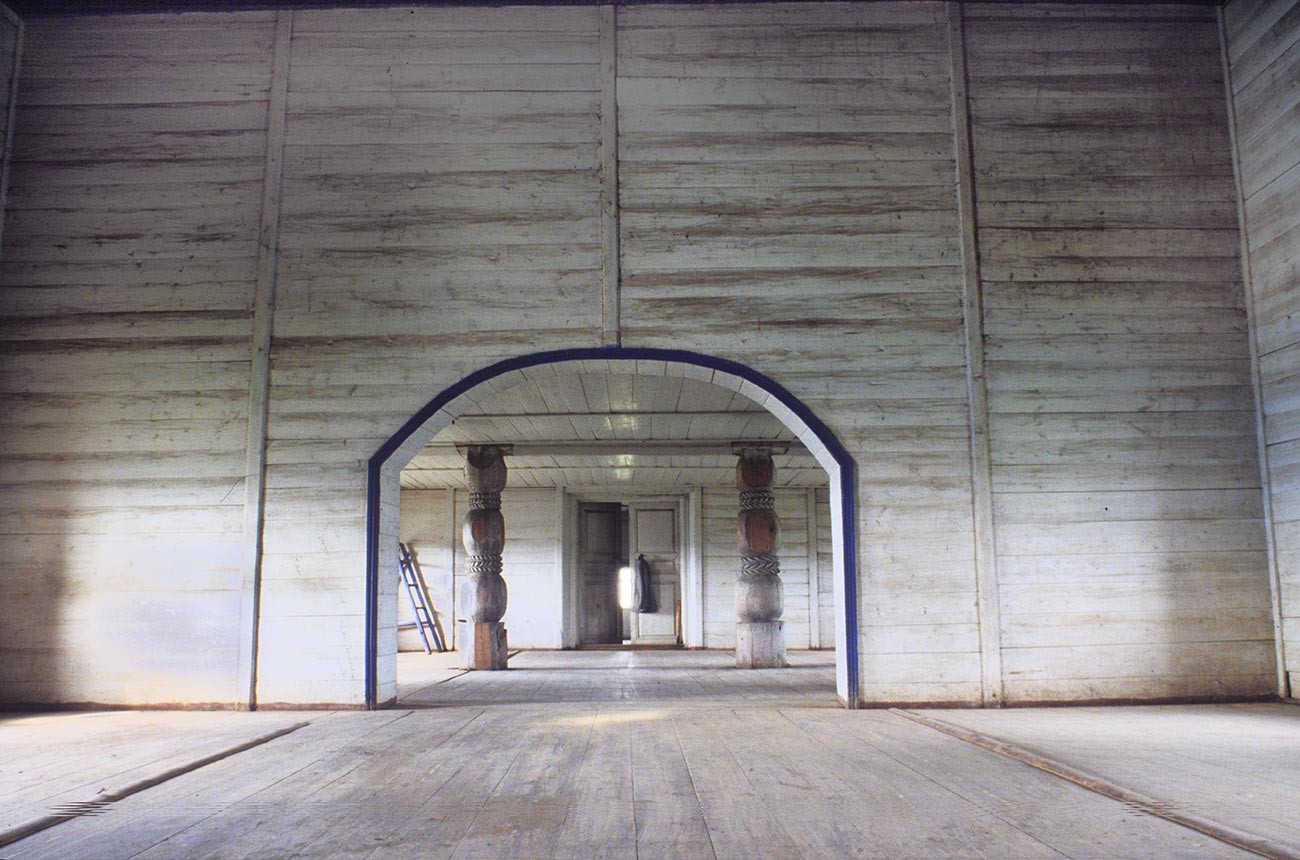 Such complexes of churches and cemetery—often referred to as a pogost—were not uncommon in the Russian North. Alas, most have long since disappeared – the villages as well as the churches. 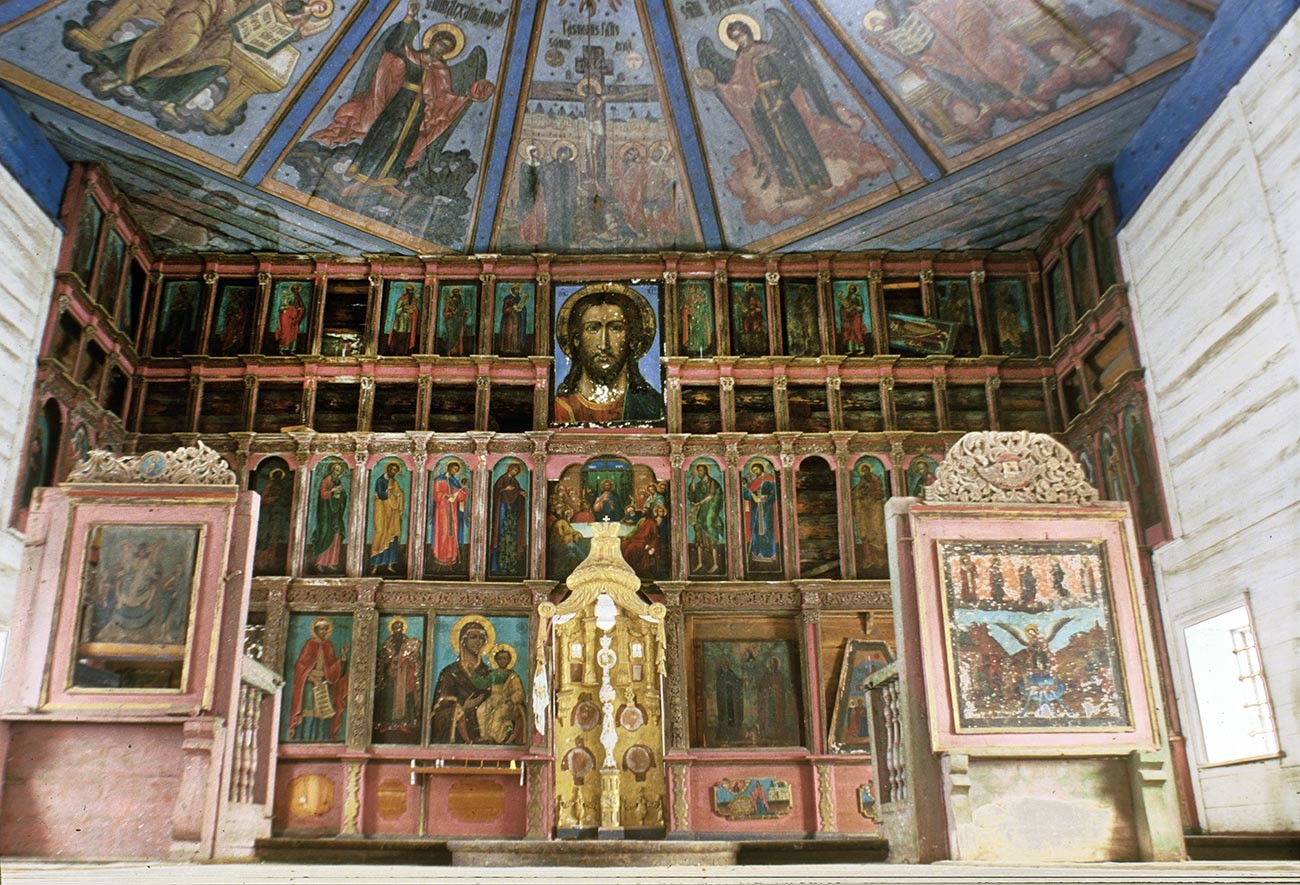 In both summer and winter, illuminated by sun or wind-blown snow, the form of the Intercession Church produced an unforgettable visual impact. Sheathed in darkened plank siding, the structure of stout pine logs ascended to a cupola and cross at its high peak. On the interior, the ground level chapel enclosed two massive log columns that supported the floor of the main worship space above.

A glimpse of heaven 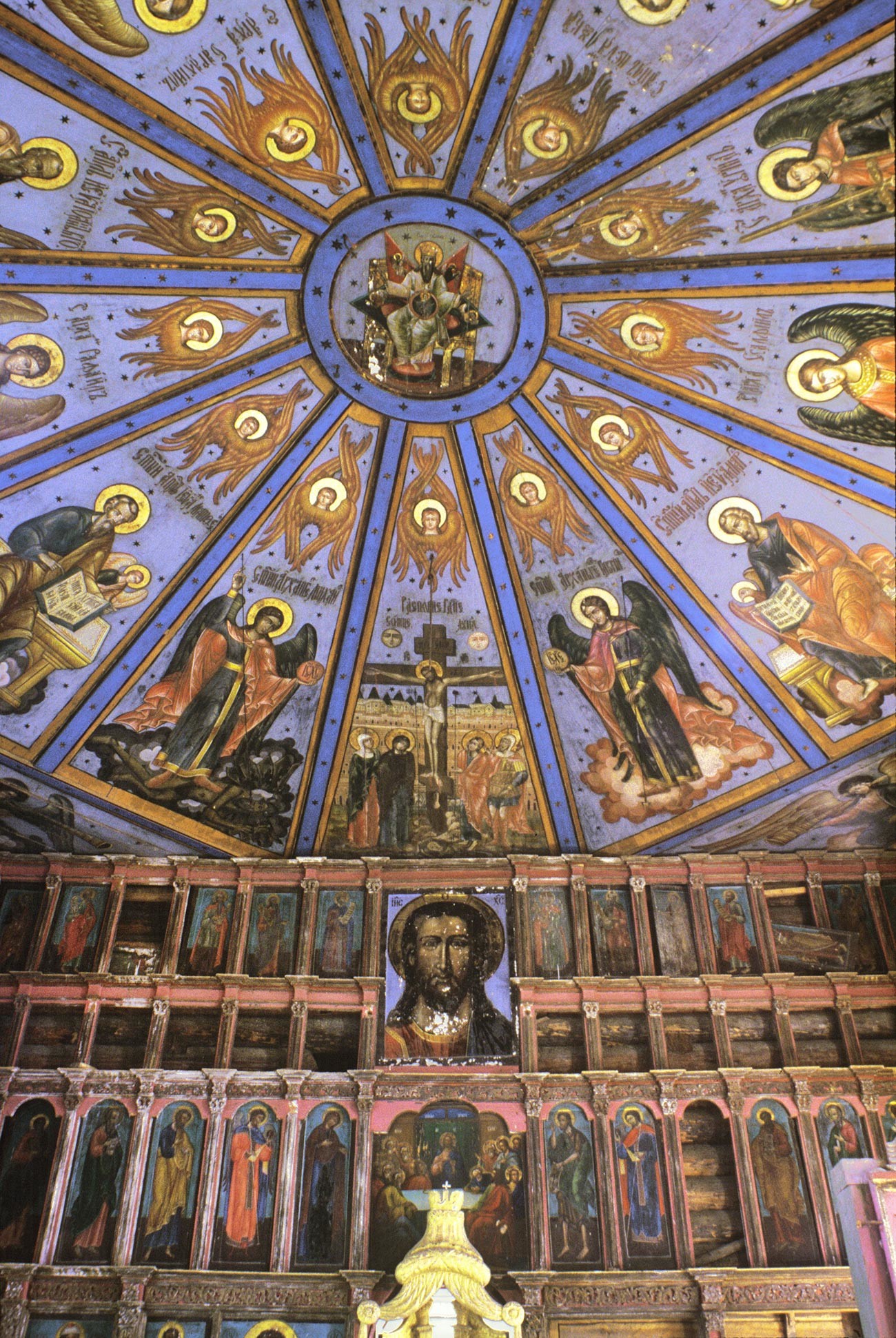 A narrow staircase ascended to this main space, and the first impression was one of clean, whitewashed walls in the vestibule. All the greater was the effect as one turned to the brightly colored icon screen and the painted nebo pitched over the worship space in an ingenious combination of art and traditional architecture.

The beams incline upward and form a skeletal frame that is self-supporting between the walls and the ring at the center. The painted panels in the shape of narrow triangles are laid upon the frame without fasteners. Tension and gravity keep the panels in place. 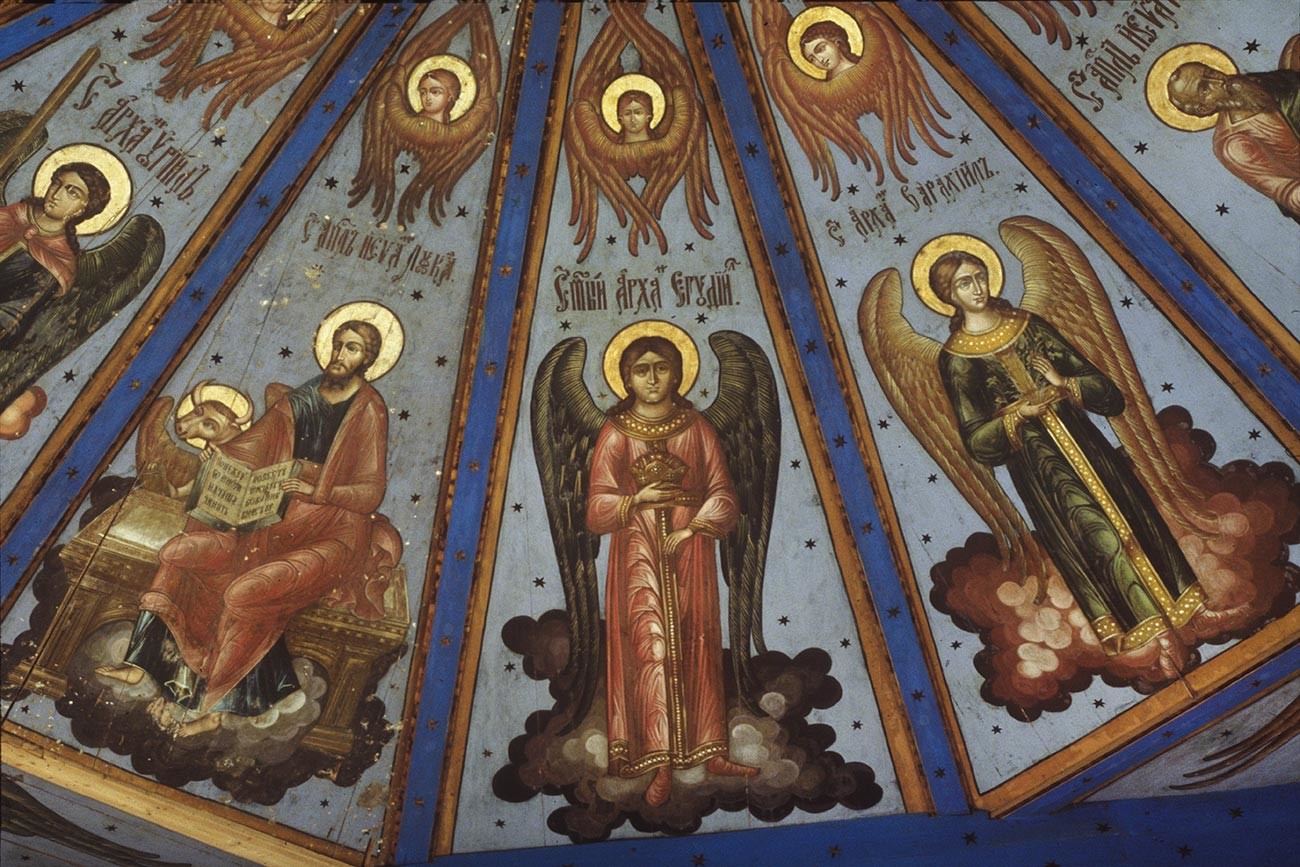 The Kargopol area has even larger examples of such painting ceilings, such as the Epiphany Church at Oshevensk, but the “heaven” at Lyadiny was the brighter work of art. Its 12 long triangular panels depicted the four Evangelists (Matthew, Mark, Luke and John) and seven of the eight archangels: Michael, Gabriel, Raphael, Uriel, Yegudiel, Varakhiel and Selafiel. The main panel above the center of the icon screen depicts the Crucifixion, with Mary and other figures at the foot of the cross and Jerusalem in the background. 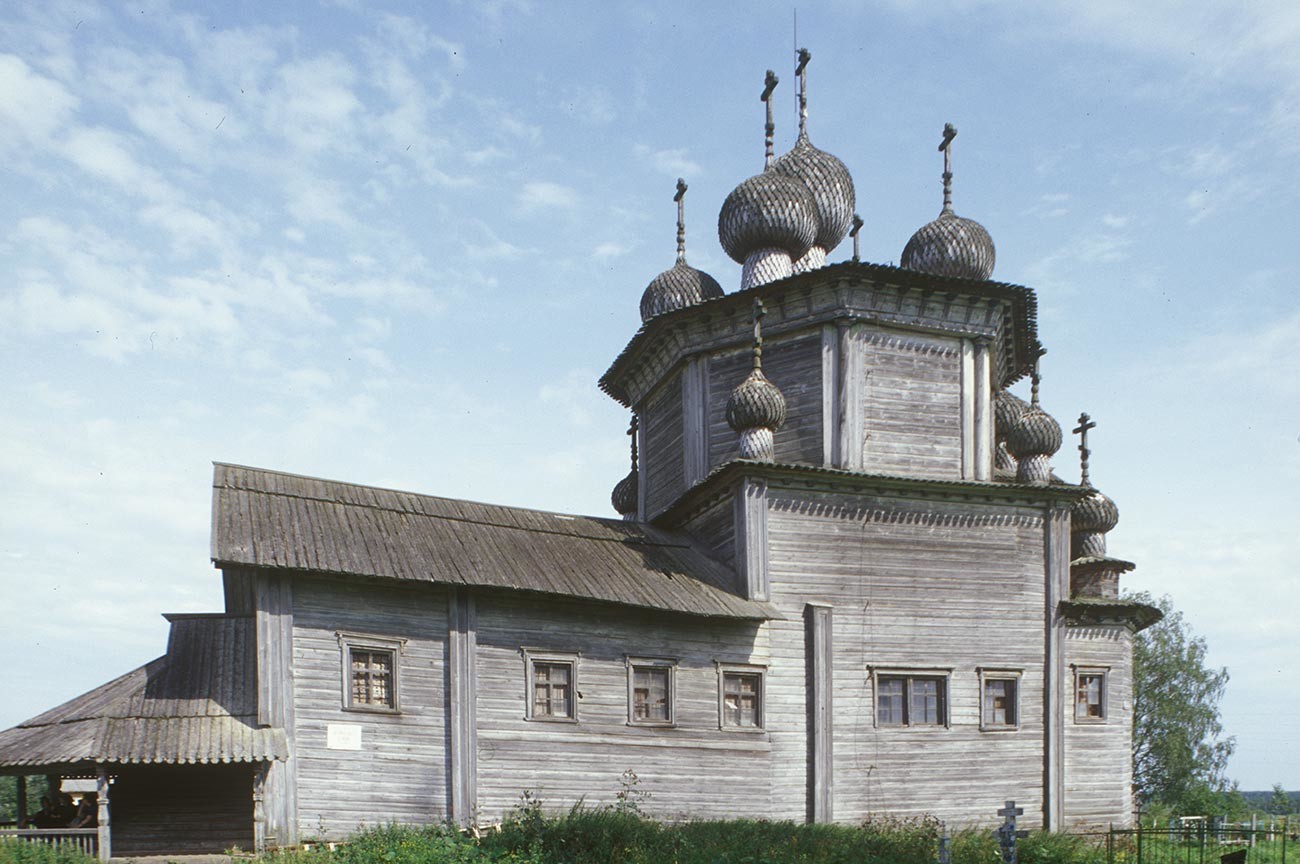 The archangels Michael and Gabriel are painted with an especially rich aura of beauty. Archangel Raphael is accompanied with the boy Tobias holding his fish--a Jewish legend from the apocryphal Book of Tobit and known in Renaissance painting.

Within the central ring is a depiction of the Trinity: Father, Son and Holy Spirit. The twelve seraphim at the tips of the triangles are painted with appealing female masks. This festive and personal artistic expression has been attributed to an icon painter active in Kargopol in the 1760s. 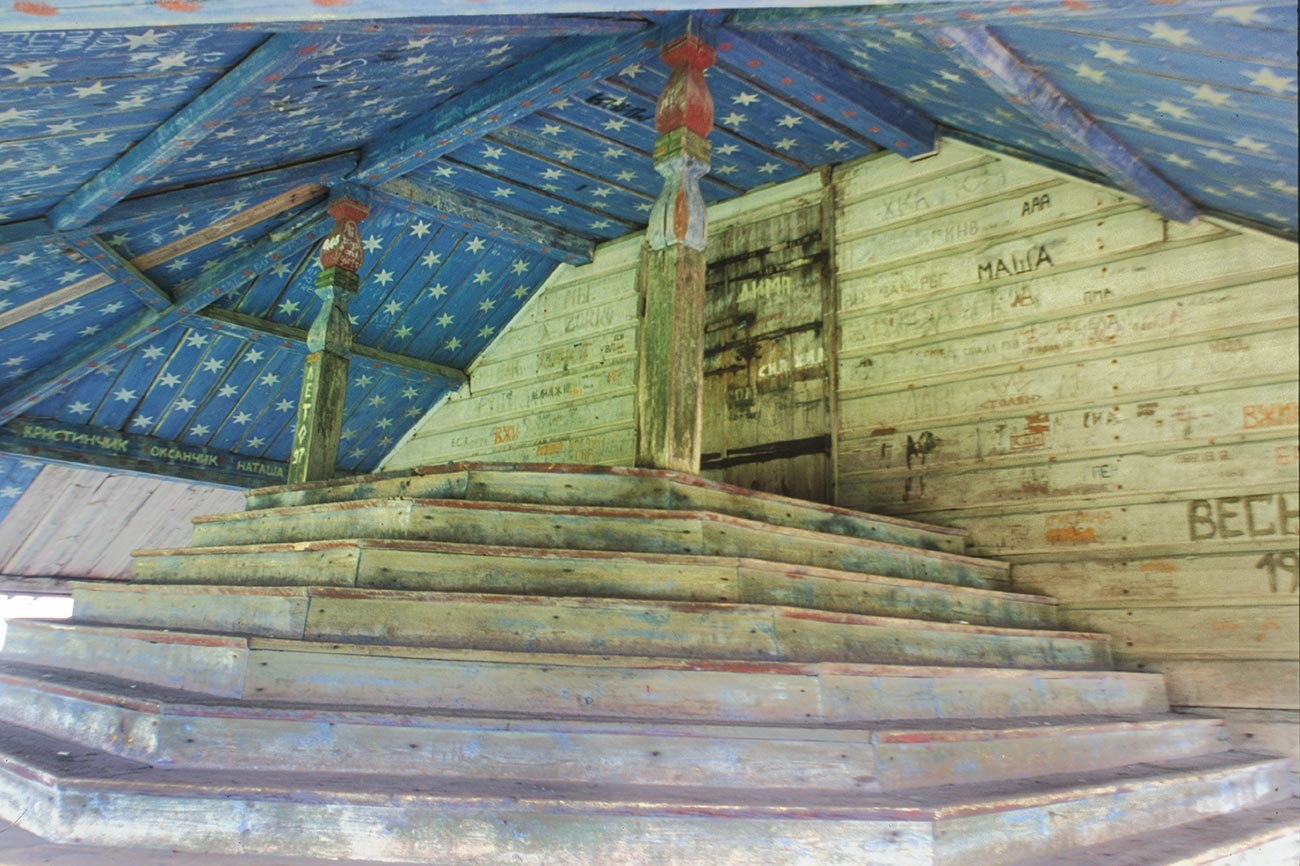 On May 5, 2013—Easter Sunday morning—the Intercession Church was struck by lightning during a severe thunderstorm. The heat of the resulting fire was so intense that the nearby free-standing bell tower self-combusted. Fortunately, firetrucks from Kargopol (some 23 miles away) arrived in time to protect the Epiphany Church.

The dozens of photographs—interior and exterior—that I took with the cooperation of the Kargopol Regional History Museum have been archived in my collection at the National Gallery of Art and provide a comprehensive record of the masterpiece. They are complemented by photographs from a visit in the summer of 2014. 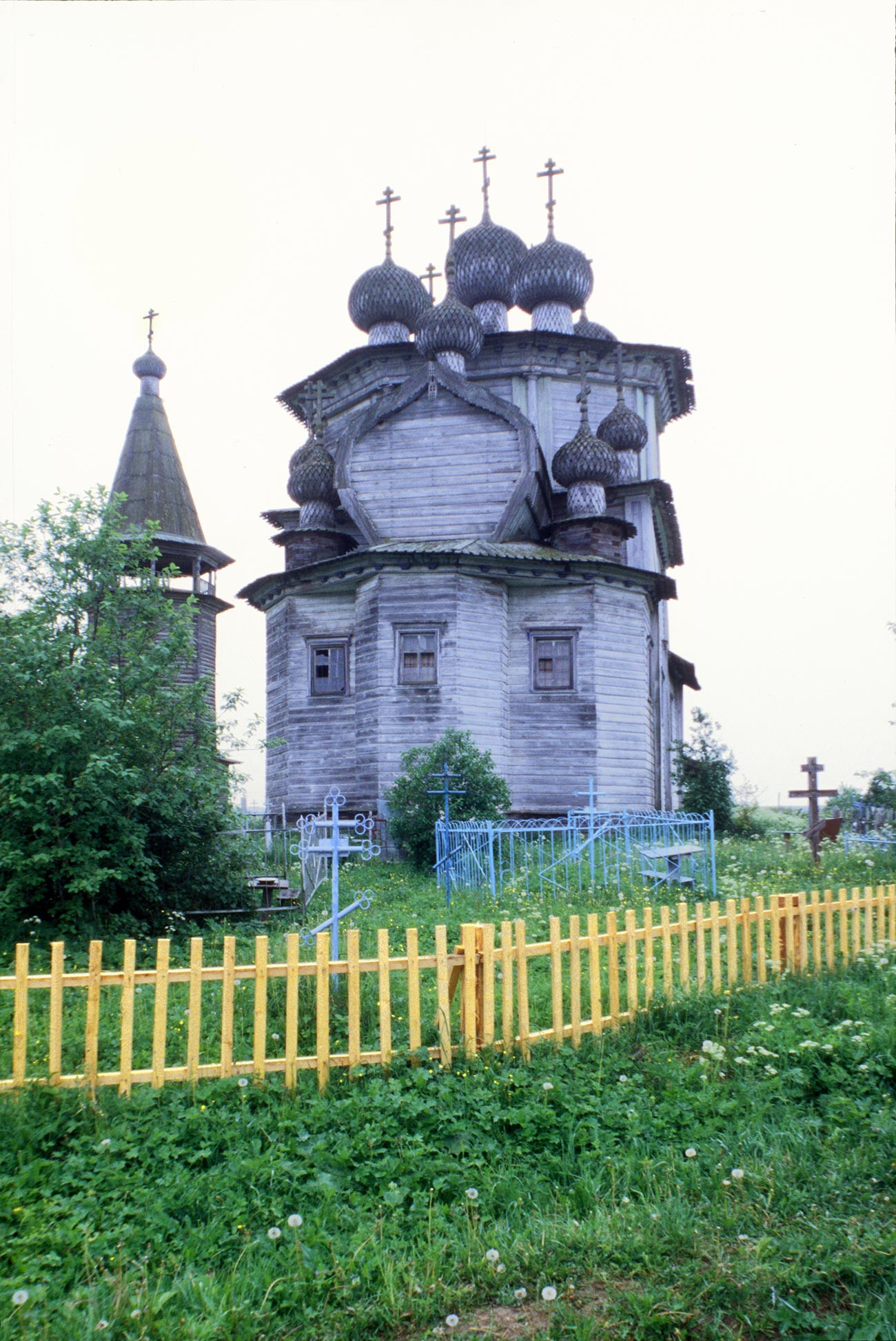 As for the adjacent Church of the Epiphany, most of its interior art was lost or damaged during the Soviet period. After the fire, restoration work accelerated, as is visible from my photographs. Of special interest is the ceiling of its capacious semicircular porch, painted with a magical starry canopy.

The two churches at Lyadiny had complemented each other perfectly, with the lower silhouette of the “winter” Epiphany Church and its cupolas matched against the daring tower of the Intercession Church. The tall bell tower, with a pitched conical roof over the bell gallery, mediated between the two churches and the cemetery crosses. 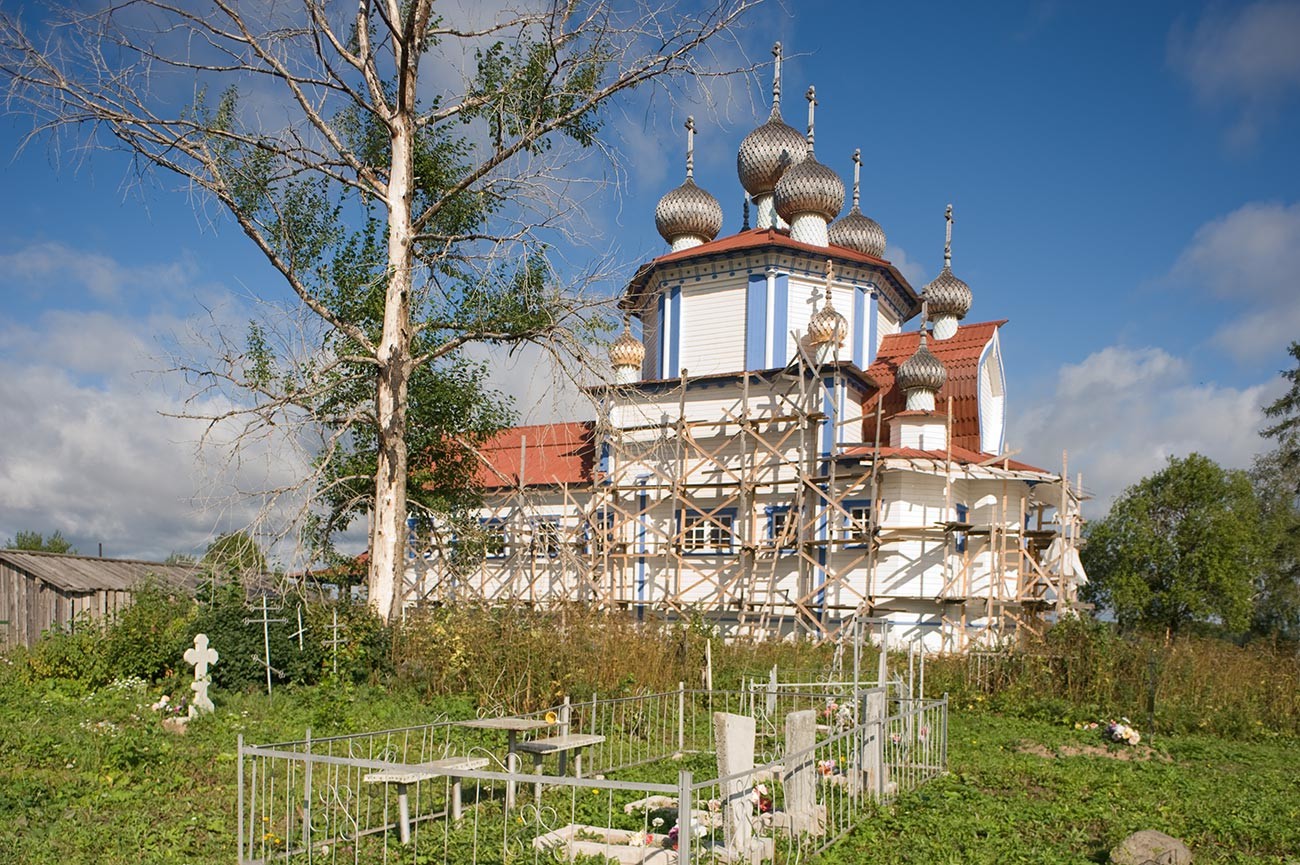 Today the village of Lyadiny (Gavrilovskaya) survives with a year-round population of approximately 60. Benefiting from a paved road to Kargopol, the village sees more residents in the summer. The local school contains an informative museum on village life. 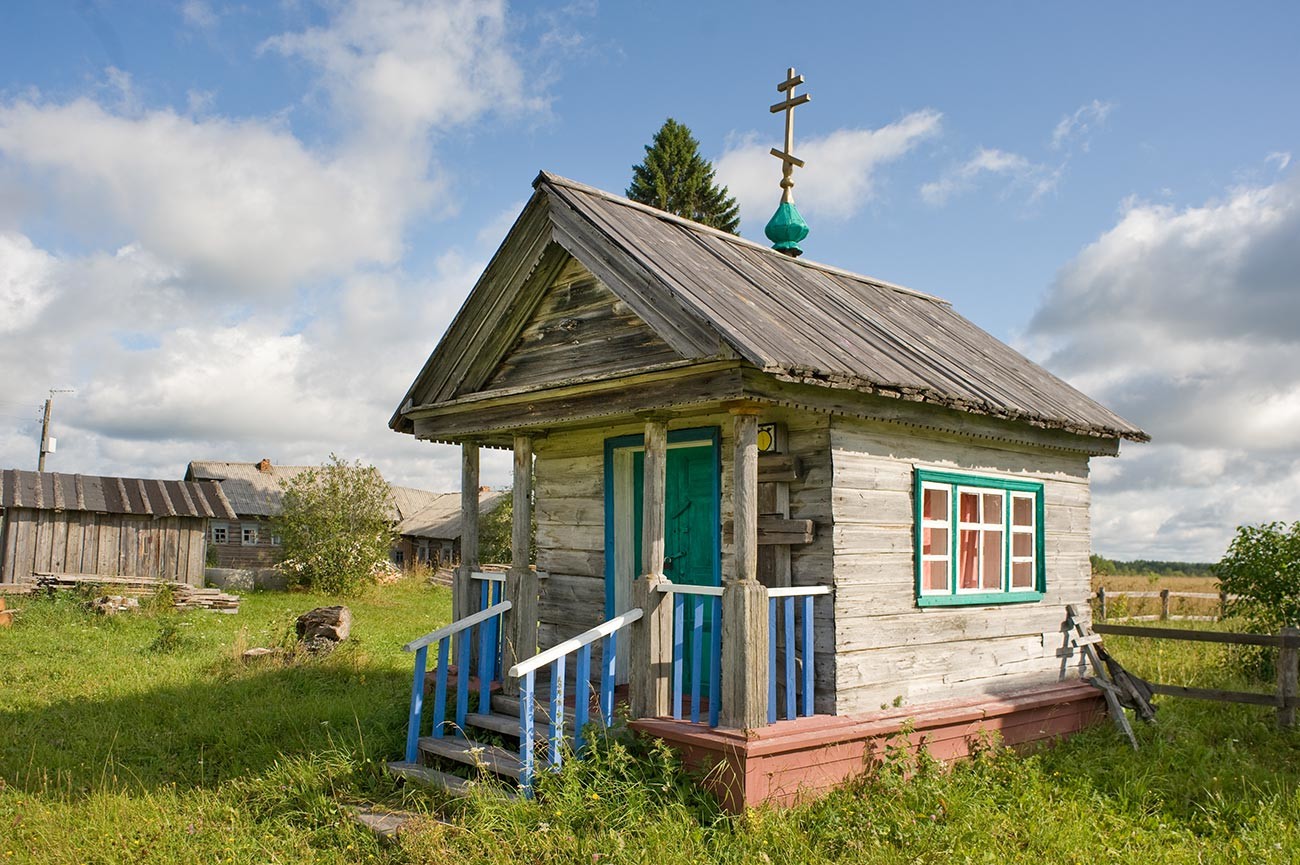 Fominskaya. Chapel of the Miraculous Icon of the Savior after restoration in early 2000s. August 14, 2014

Many of the sturdily crafted wooden houses—some with attached barns—have been abandoned in a pattern of population loss long typical of the northern countryside. Dairy farming is still possible, but life here is challenging. It is to be hoped that Kargopol will continue to support a village that contained a priceless treasure of traditional Russian culture. 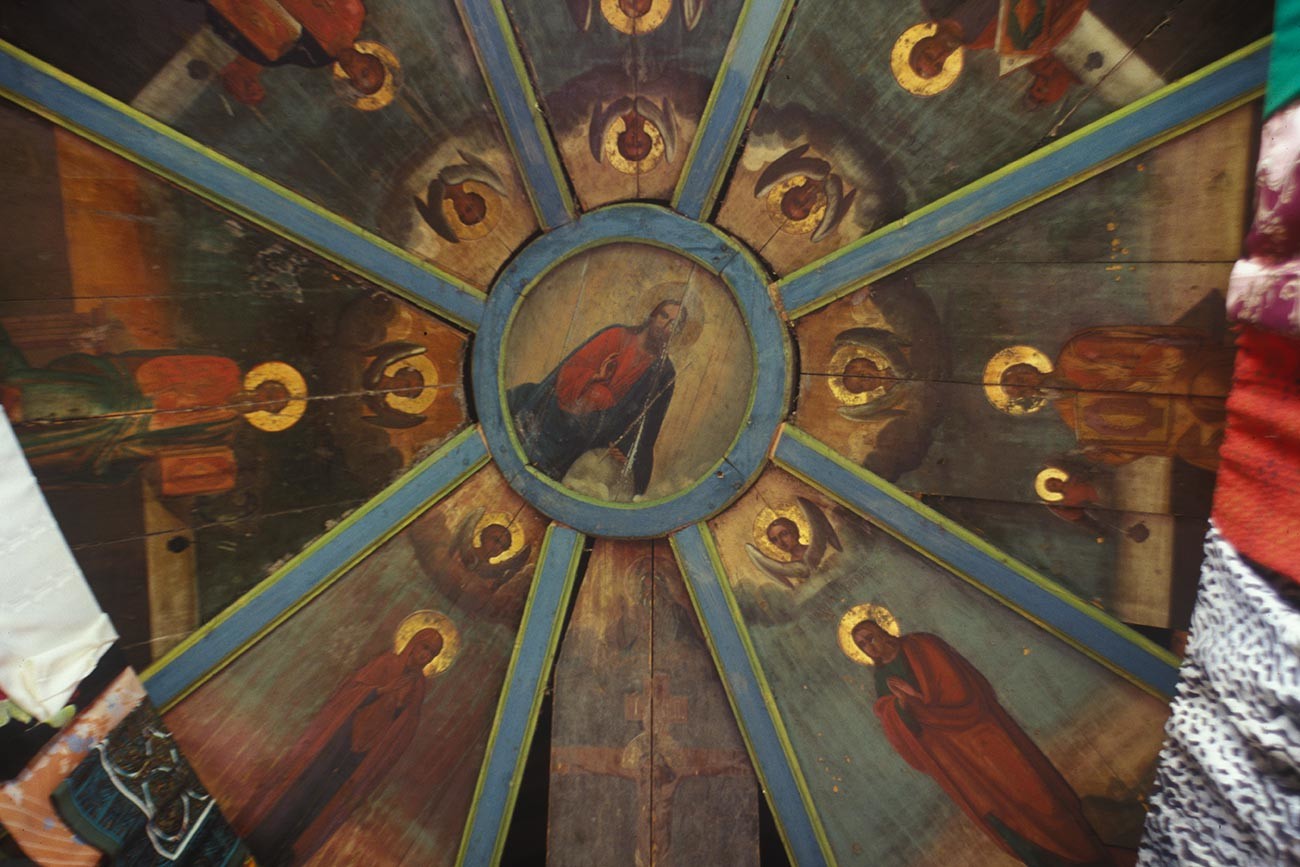 Fominskaya. Chapel of the Miraculous Icon of the Savior. Interior with painted ceiling (nebo). June 16, 1998