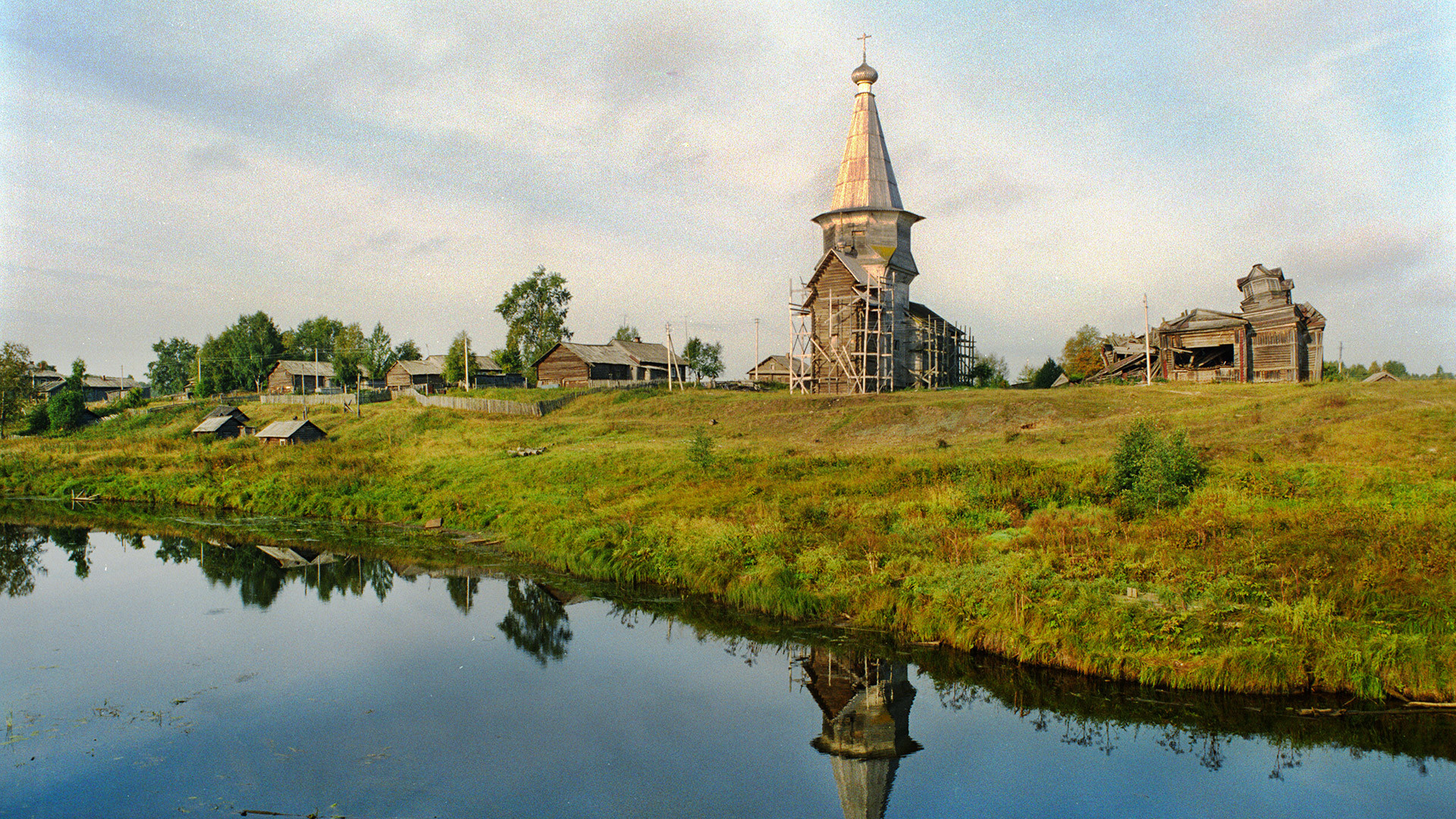 In summer 1909, Russian photographer and chemist Sergey Prokudin-Gorsky photographed sites along the Mariinsky Waterway in northwestern Russia. Initiated by Peter the Great to connect St. Petersburg south to the Volga River basin, this strategic waterway was further developed during the reign of Emperor Paul (1796-1801), who named it the Mariinsky Canal in homage to his consort, Empress Maria Feodorovna.

A major point on Prokudin-Gorsky’s Mariinsky itinerary was the town of Vytegra, located on the Vytegra River. Vytegra not only served as an administrative center along the great waterway, but it also led to more remote points in the vast territory of the Russian North. 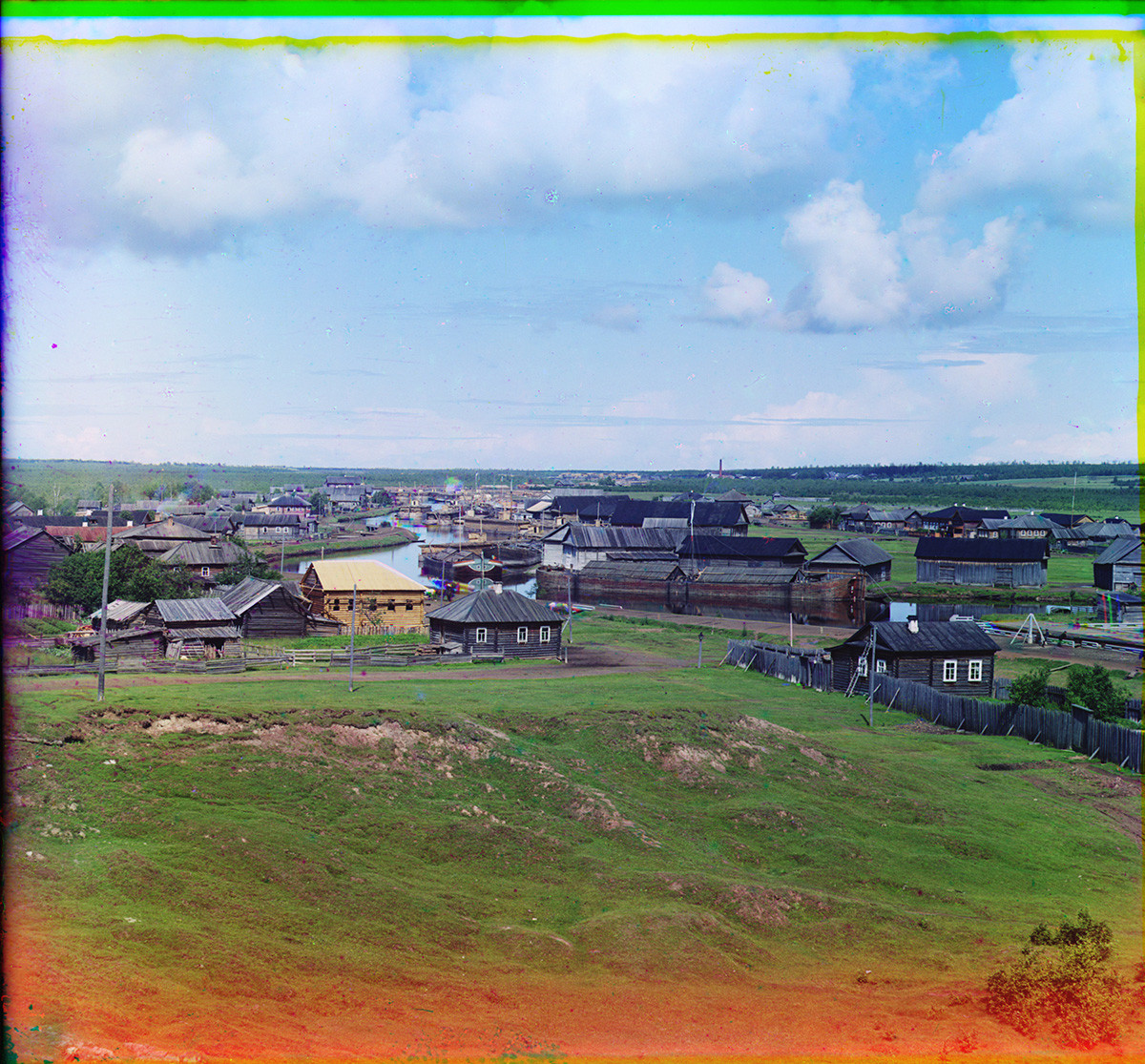 While at Vytegra, Prokudin-Gorsky photographed distinctive examples of traditional wooden architecture in the nearby villages of Ankhimovo and Paltoga. As my previous publications show, much that he photographed there no longer exists or has changed in significant ways. 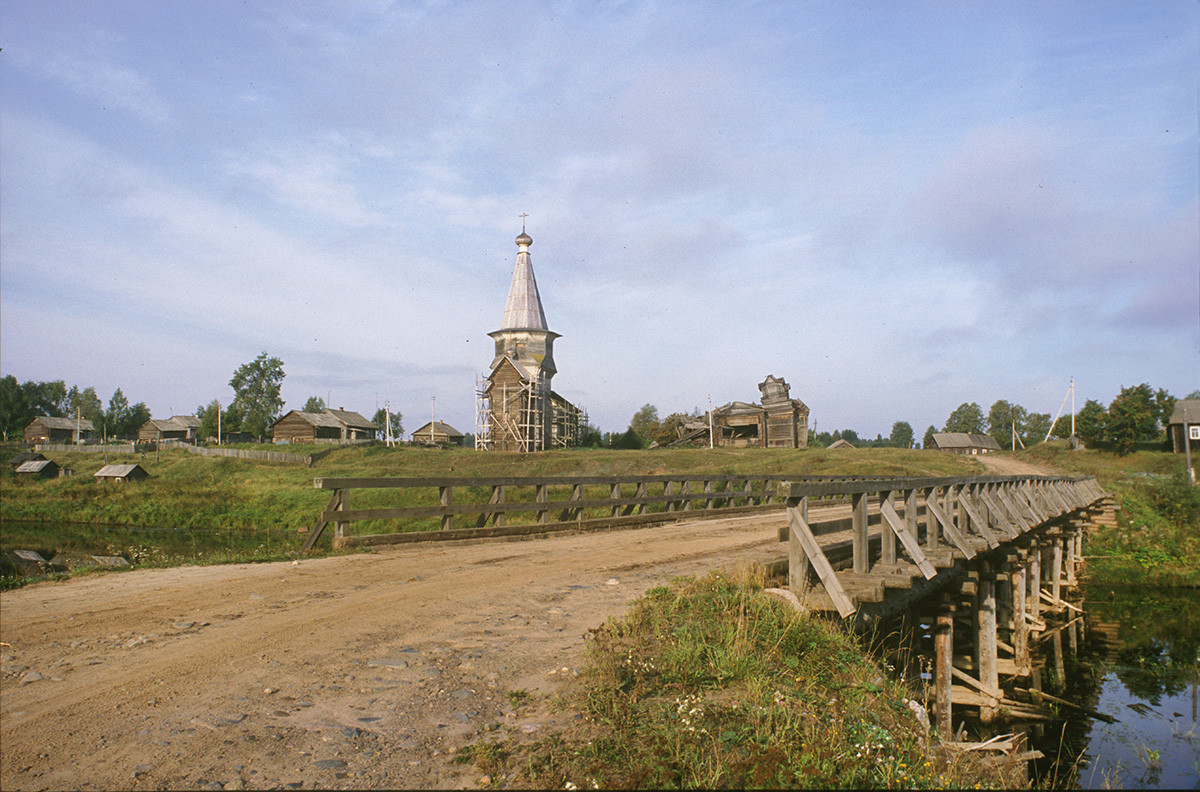 Saminsky Pogost. View of Church of Elijah the Prophet from wooden bridge across Samina River. August 28, 2006

In early medieval Russia, the term “pogost” originally referred to territorial centers surrounded by numerous hamlets that could be used to receive dignitaries, or “guests,” making official rounds in this largely rural country. This practice was applied particularly in the vast regions controlled by the major commercial center of Novgorod the Great. Through a natural social logic, these sites were soon graced with a church ensemble and cemetery.

With the spread of serfdom in Russia, the country estate and its villages became a basic administrative unit. In the Russian North, however, serfdom and landed estates were largely absent, and the pogost retained its territorial status until 1775, with a limited role thereafter until the Soviet period. 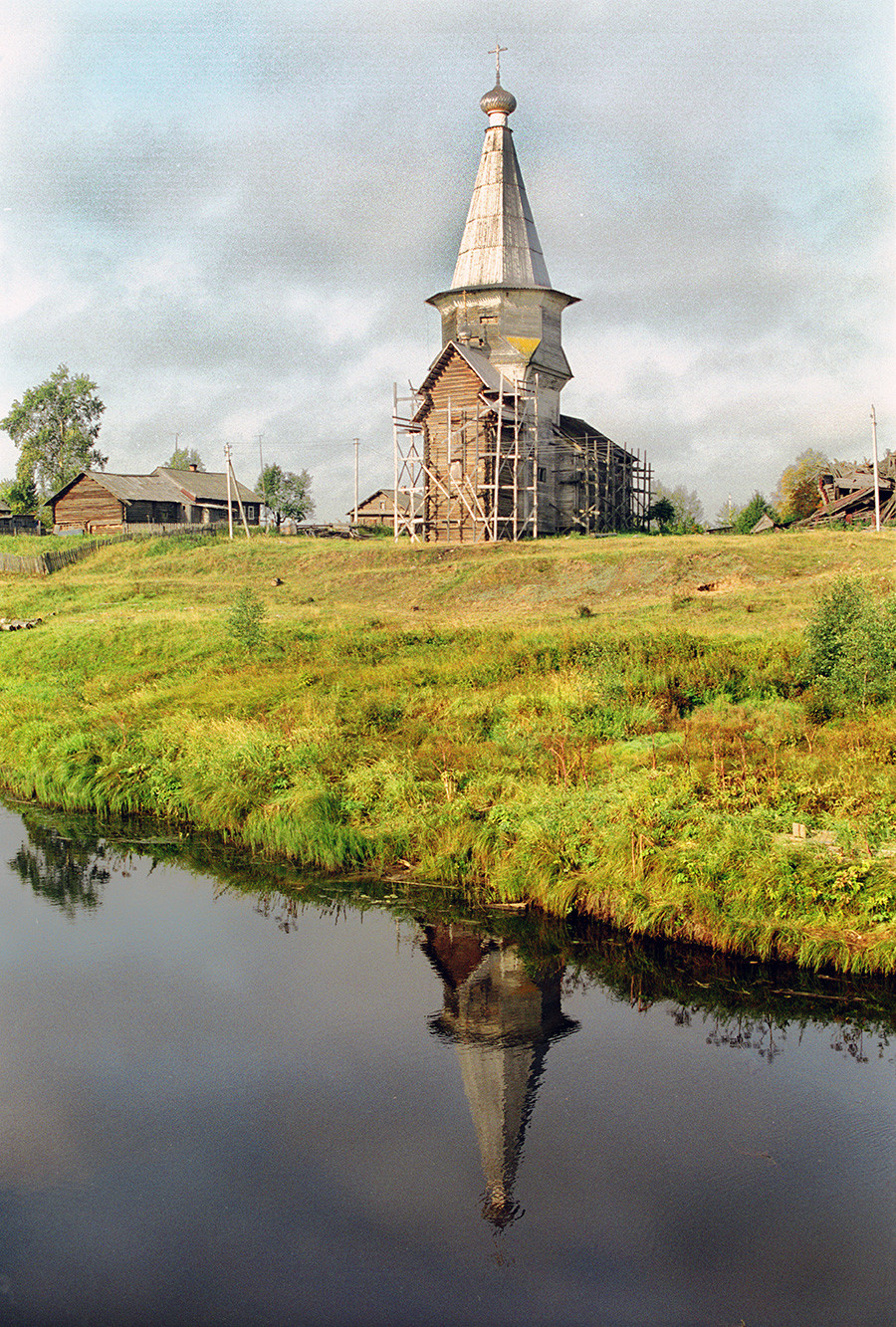 Ultimately, the term pogost came to be understood as the church ensemble and cemetery that arose at such centers. These sacred precincts were often enclosed by a low wall of fieldstone and logs, as at Kizhi. 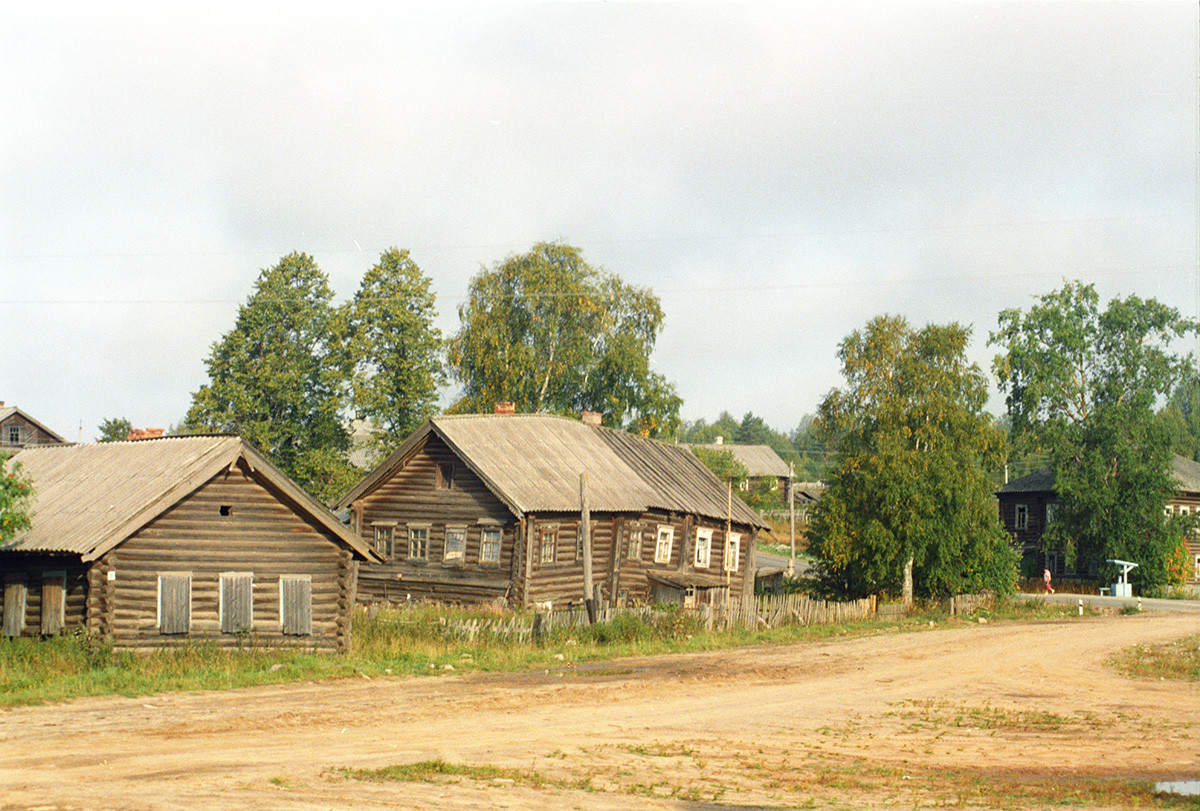 Saminsky Pogost was likely formed by the 15th century and became one of two parts of the larger Andomsky Pogost. (The Samina flows into the Andoma River, which empties into Lake Onega.) Its church ensemble, including a cemetery, arose on the right bank of the Samina River.

The earliest documented church at Saminsky Pogost was built in 1652 and dedicated to Elijah the Prophet. Shortly thereafter, in 1656, the neighboring Church of Sts. Florus and Laurus was erected. (Traditionally, a pogost could have two churches, one of which was intended for use primarily in the summer.)

Both churches were built of logs, and the Elijah Church was destroyed by fire at the end of the 17th century. Wooden churches frequently fell victim to fires (including those caused by lightning strikes), but in this case, there is an added irony: Elijah was considered the “patron saint” of fire. 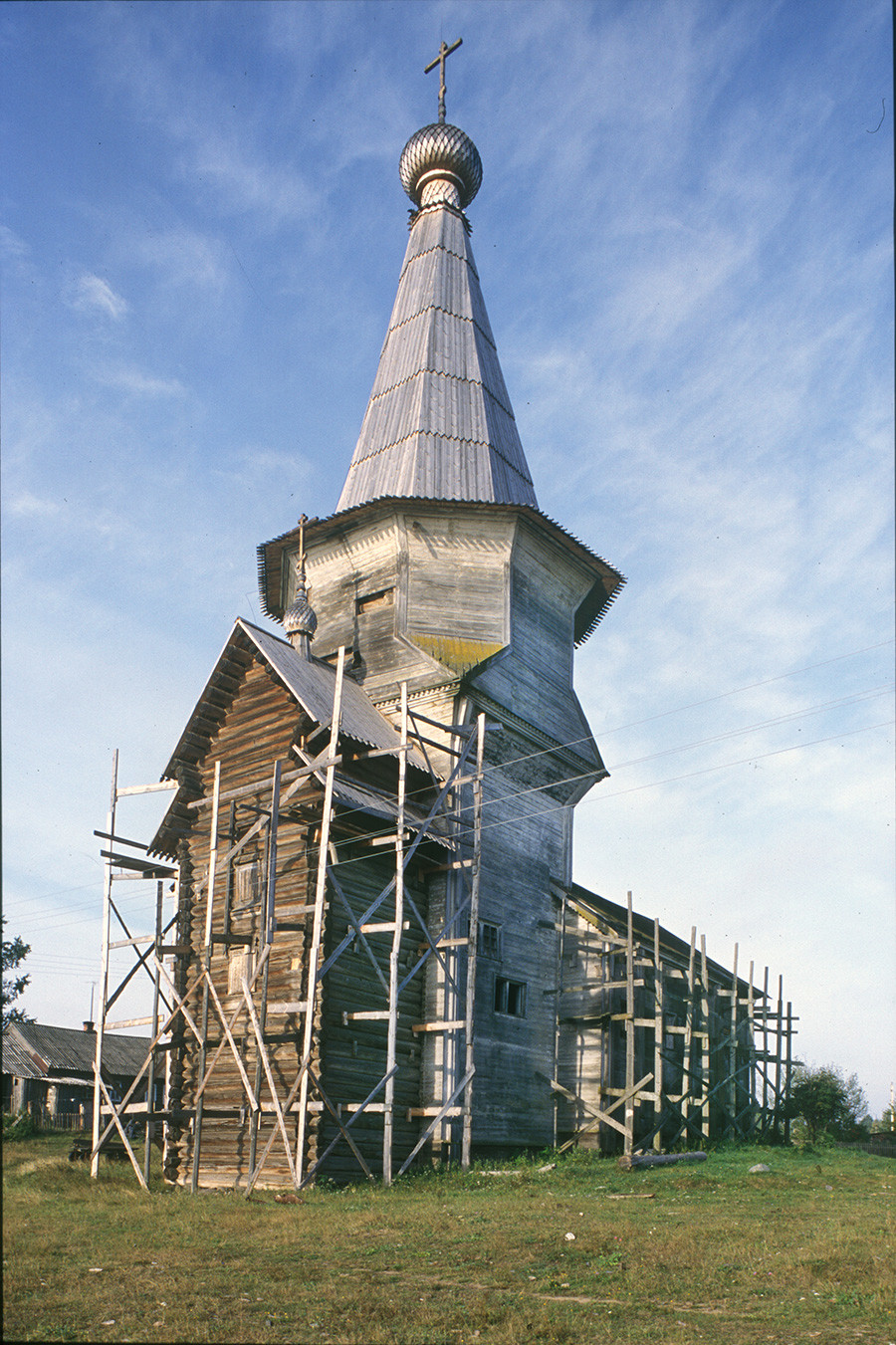 Church of Elijah the Prophet. Northeast view with remnants of restoration scaffolding. August 28, 2006

Although work began on a replacement in 1692, the new Elijah Church was not consecrated until 10 years later—an atypically long time for a wooden church. A closer view of this extraordinary structure suggests a partial explanation for the prolonged construction.

Superbly proportioned, the Elijah Church has a tall, square base culminating on each side with flared log courses – a device known in Russian as poval – that protect the walls beneath from excessive moisture. The top logs serve as a base for triangular gables.

The gables transition to an octagonal structure that also culminates in flared log courses. They, in turn, support an apron of short boards at the base of a soaring “tent” tower capped with a cross over a cupola clad in carved shingles.

Such tower churches formerly dotted the Russian North, but fires and neglect have severely depleted their number. Usually the “tent” tower consisted of vertical planks over a skeletal frame, but in the case of the Elijah Church, the massive tower had ascending, progressively smaller octagonal courses covered by plank cladding. 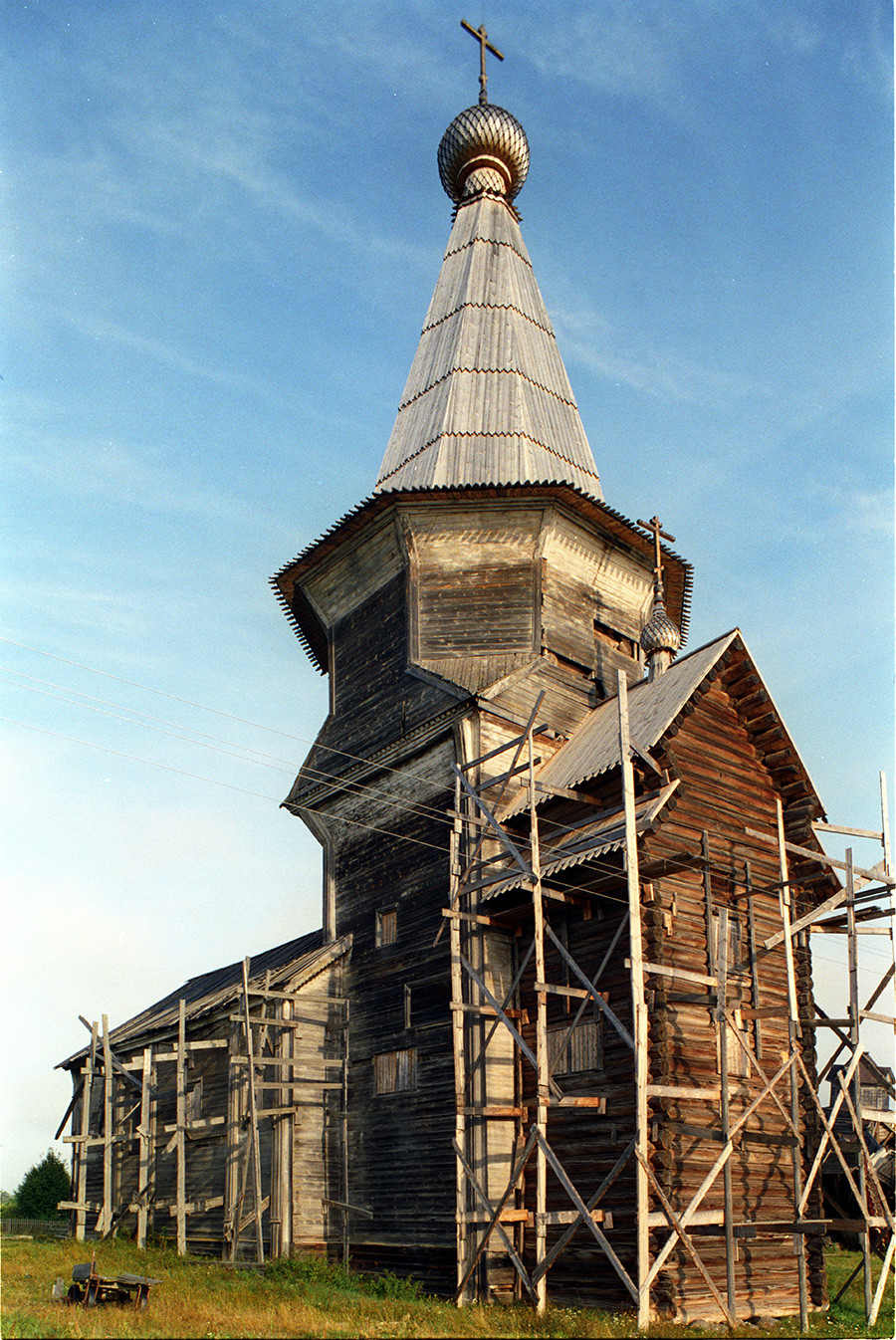 Church of Elijah the Prophet. Southeast view with remnants of restoration scaffolding. August 28, 2006

An attached structure on the east end contained the main altar (as required by the Russian Orthodox Church), A larger extension on the west contained a vestibule that served the parish community.

Renovations in the 18th-century included an increase in the height of the tower. During the 19th century, the structure’s exterior was covered with plank siding painted white, and a bell tower was built over the west end of the vestibule. On the interior, the church had an icon screen, many icons of which were probably painted in the 18th century, with 19th-century additions. It also had a painted ceiling, or “sky”.

An ’urban’ church in a rural setting 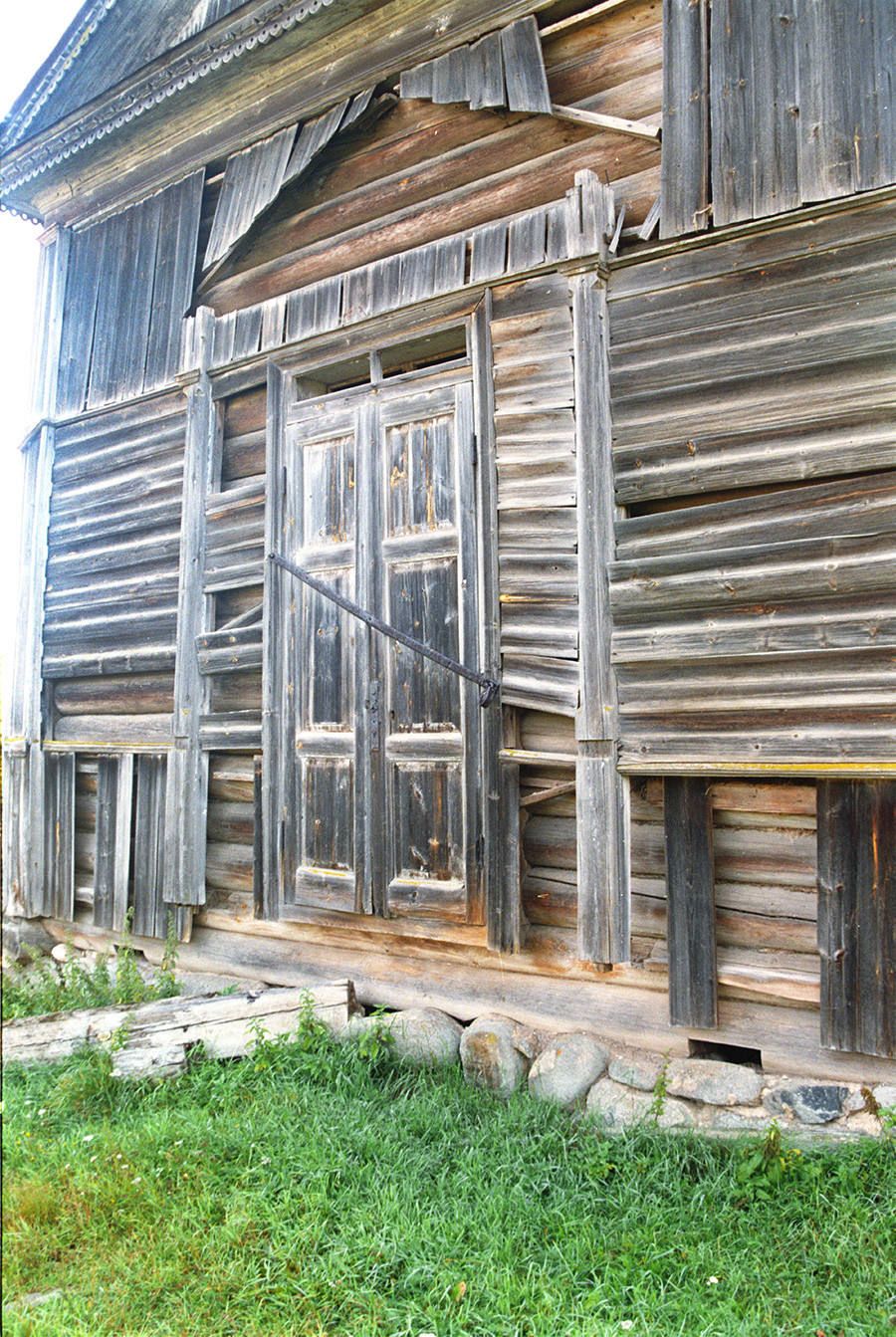 As for the nearby Church of Sts. Florus and Laurus, it fell into extreme disrepair and was replaced in 1897 by a wooden church dedicated to the Tikhvin Icon of the Virgin—a sacred image especially revered in the northwestern part of Russia. With its relatively low, compact dimensions, it could be more easily heated and was intended for use in the winter.

Curiously, the design of the wooden Tikhvin Church does not resemble traditional wooden architecture. Instead, its design closely followed a style of masonry architecture associated with the architect Konstantin Thon (1794-1881), whose designs were a model for 19th-century churches in the so-called Russo-Byzantine style sanctioned by the church hierarchy from the time of Nicholas I.

Slavishly imitating the stuccoed brick walls and architectural details of such urban churches, the log structure of the Tikhvin church lacked the coherence of traditional architecture, with its self-reinforcing structural elements. The consequences of this hybrid construction would become evident in the following decades. 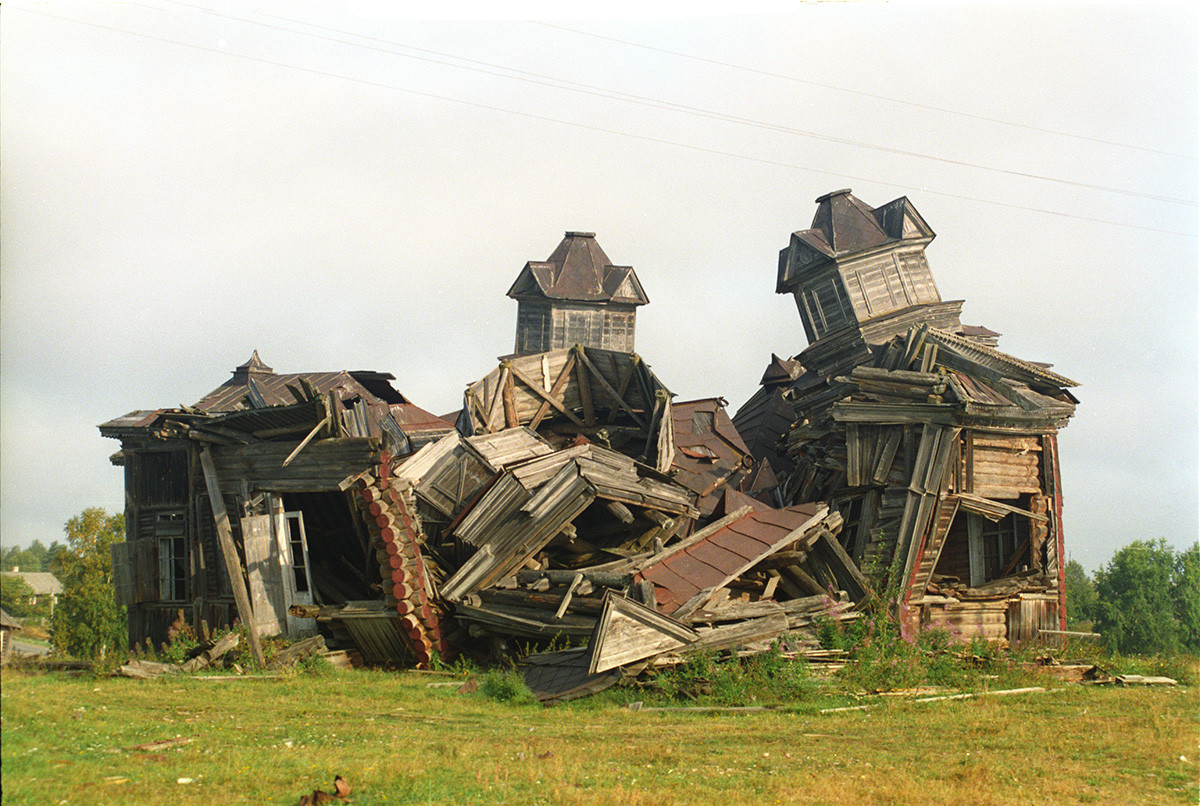 Ruins of Church of Tikhvin Icon of the Virgin, southeast view. August 28, 2006

With the establishment of Soviet power, both churches were closed, and the cemetery overlooking the river was effaced. The Elijah Church was eventually converted into the village club. In 1954, the club director was ordered to remove the icons and the painted ceiling. Instead of destroying them, he had them covered with blue paint. This solution enabled some of the icons to be salvaged years later and placed in the Vytegra Museum.

Around 1979, the Elijah Church bell tower was pulled down. (The bells had long since disappeared.) At the same time, the remarkable church was declared an architectural monument and limited conservation was undertaken to prevent further deterioration to the main structure. 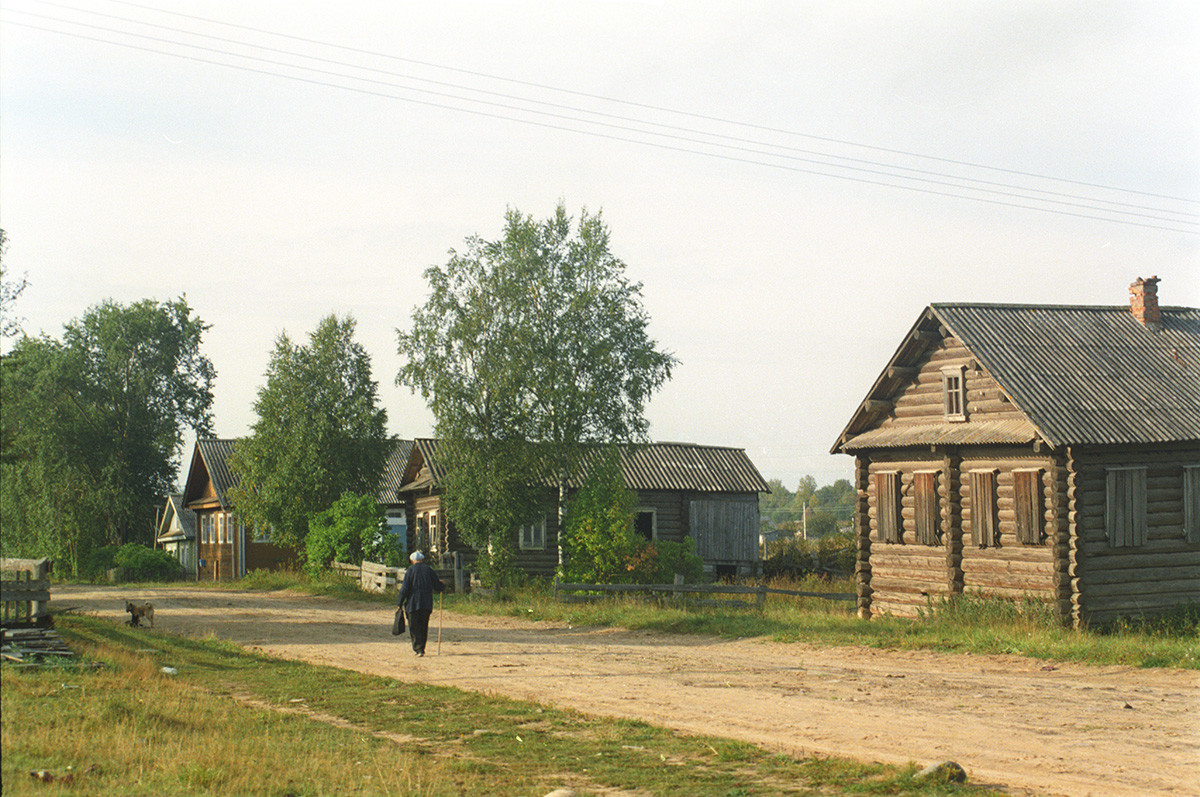 At the beginning of this century, these efforts were supervised by the preservation workshop of Alexander Popov, but no attempt was made to rebuild the 19th-century bell tower. Traces of these efforts were still visible at the time of my visit in August 2006. The plank siding was retained to reduce costs and as a means of protecting the log structure.

As its population dwindled (21 inhabitants as of 2010), Saminsky Pogost has lost most traces of organized village life. However, the Elijah Church has been reconsecrated, and each year on Elijah Day (August 2) a priest visits to conduct the liturgy.

The sad fate of the adjacent Tikhvin Church is evident from the ruins that I photographed in 2006. With its low design imitative of masonry churches, it sagged from the weight of annual snowfalls. 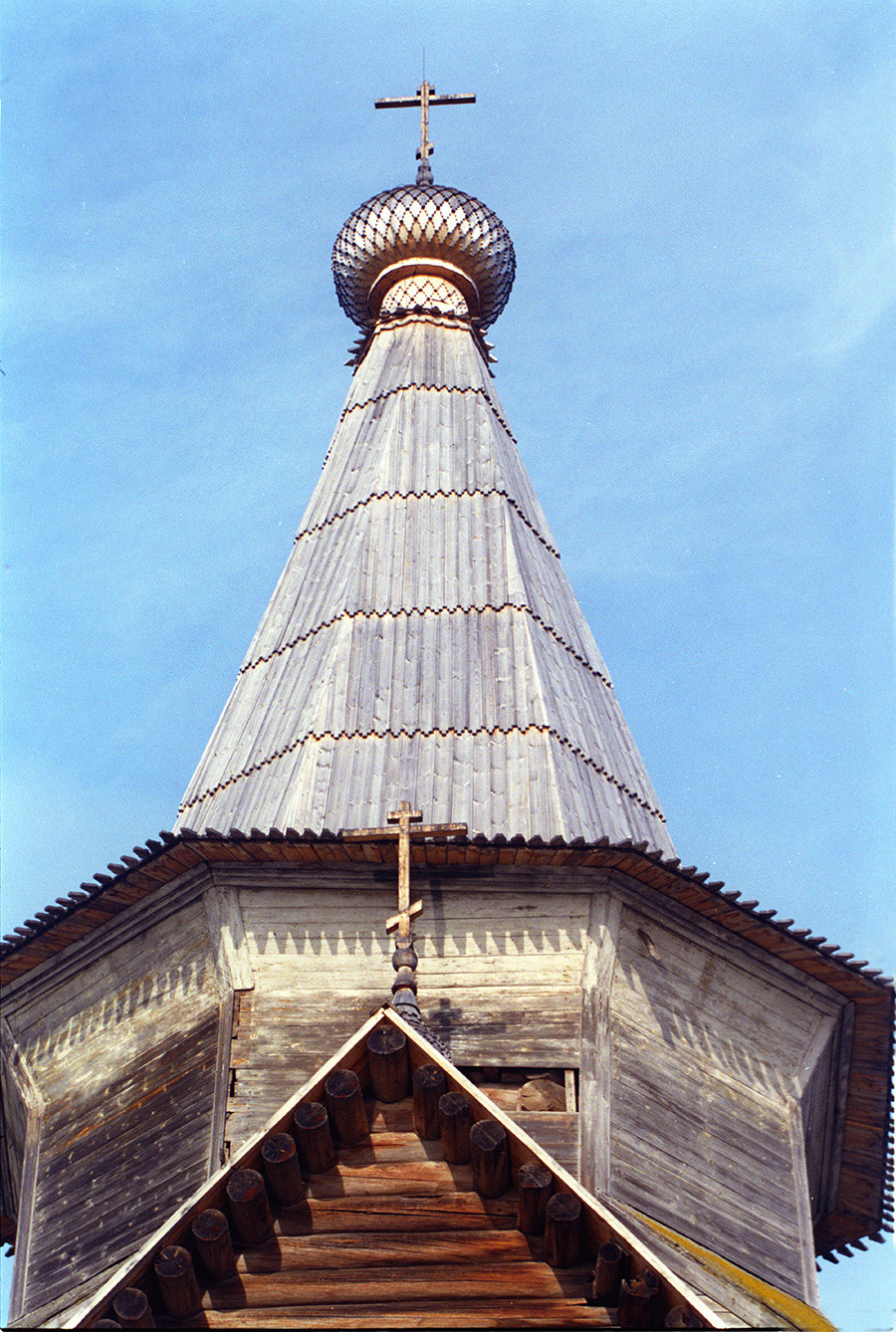 Lacking maintenance and with little value as a work of architecture, the Tikhvin Church collapsed. Shortly after my visit, attempts were made to re-erect surviving parts of the structure, but they did not last. Fortunately, the much earlier, daring form of the Elijah Church still stands for over three centuries as a monument to the traditional virtues of northern log architecture.

A story of resurrection 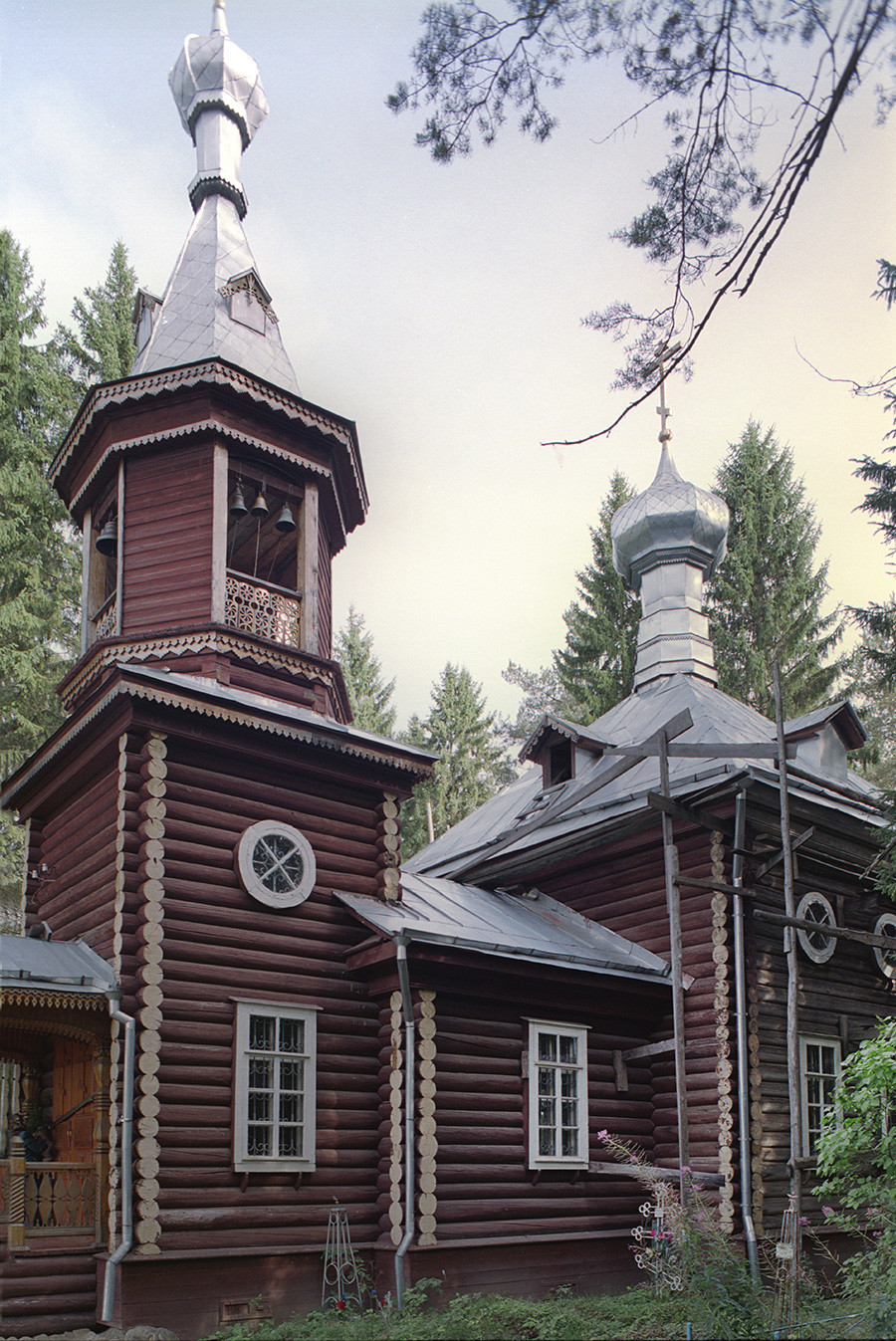 And what of the neighboring Andoma Pogost? Only a shell remains of its early 19th-century brick church, yet a nearby village with the lush name of Troshigino harbors an enchanted log Church of the Resurrection nestled within the fir trees of a cemetery.

Begun in 1902 with funds from a merchant from the city of Pskov, the church was completed the following year and dedicated to the Ascension. Its bell tower was funded by a wealthy local peasant. 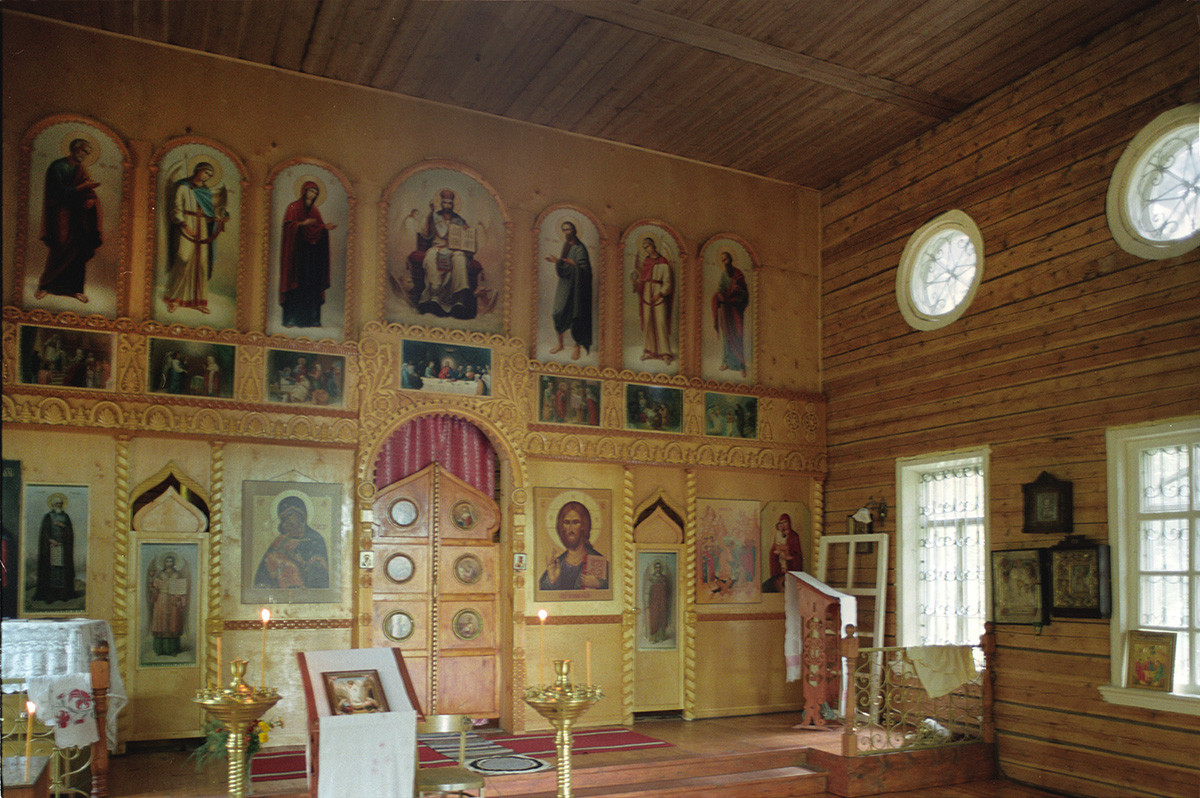 Closed and ransacked in the 1930s, the former church was used as a storehouse, but the cemetery remained. This at least saved the structure, which was restored by a local entrepreneur at the turn of this century and consecrated anew to the Resurrection (appropriately) in 2002. 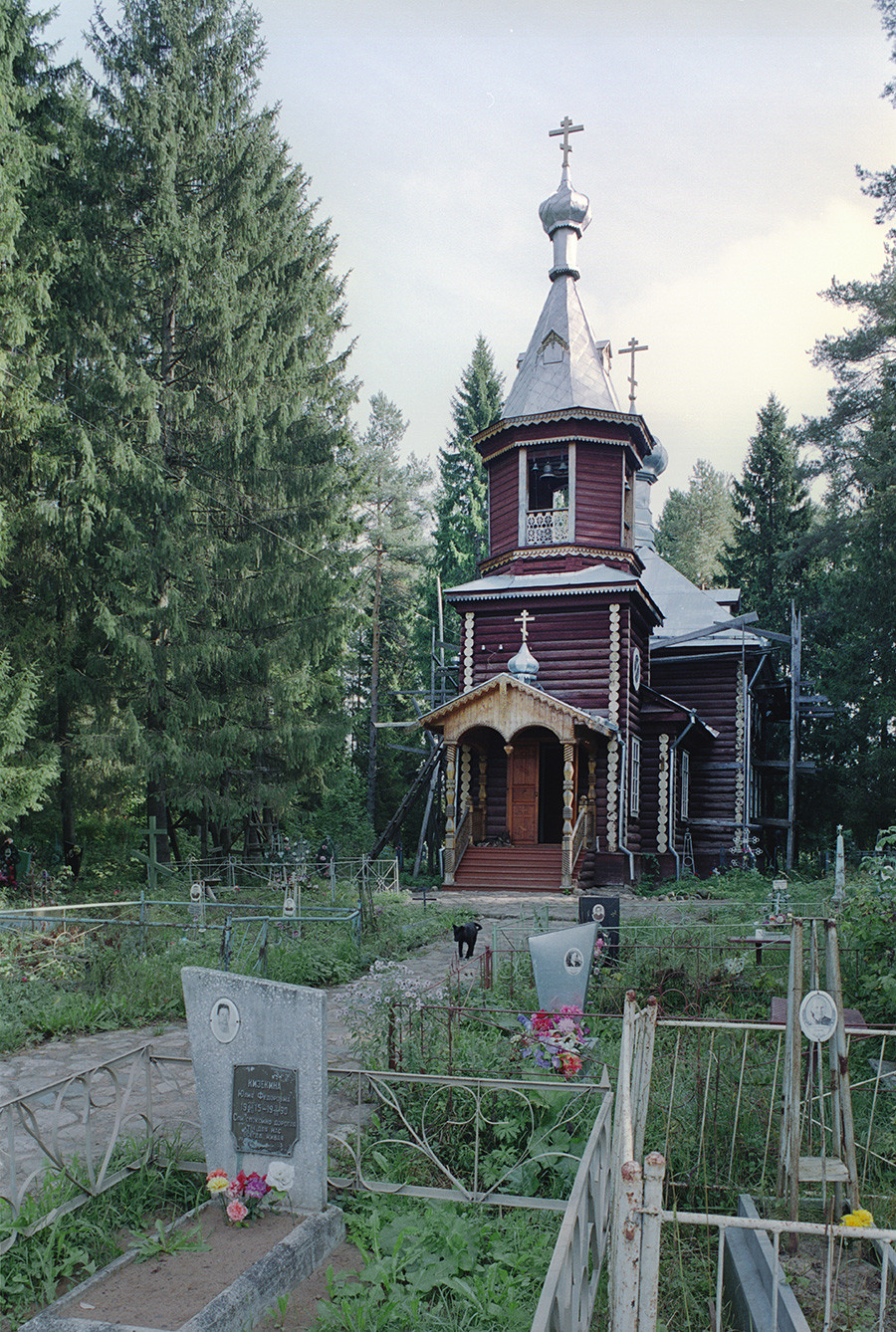 Troshigino. Church of the Resurrection. West view with cemetery. August 28, 2006

This delightful example of the early 20th-century “neo-Russian” style, beckons toward a warm wood-paneled interior with a new icon screen. Local inhabitants, it would seem, return body and soul to this shrine in the brooding northern forest. 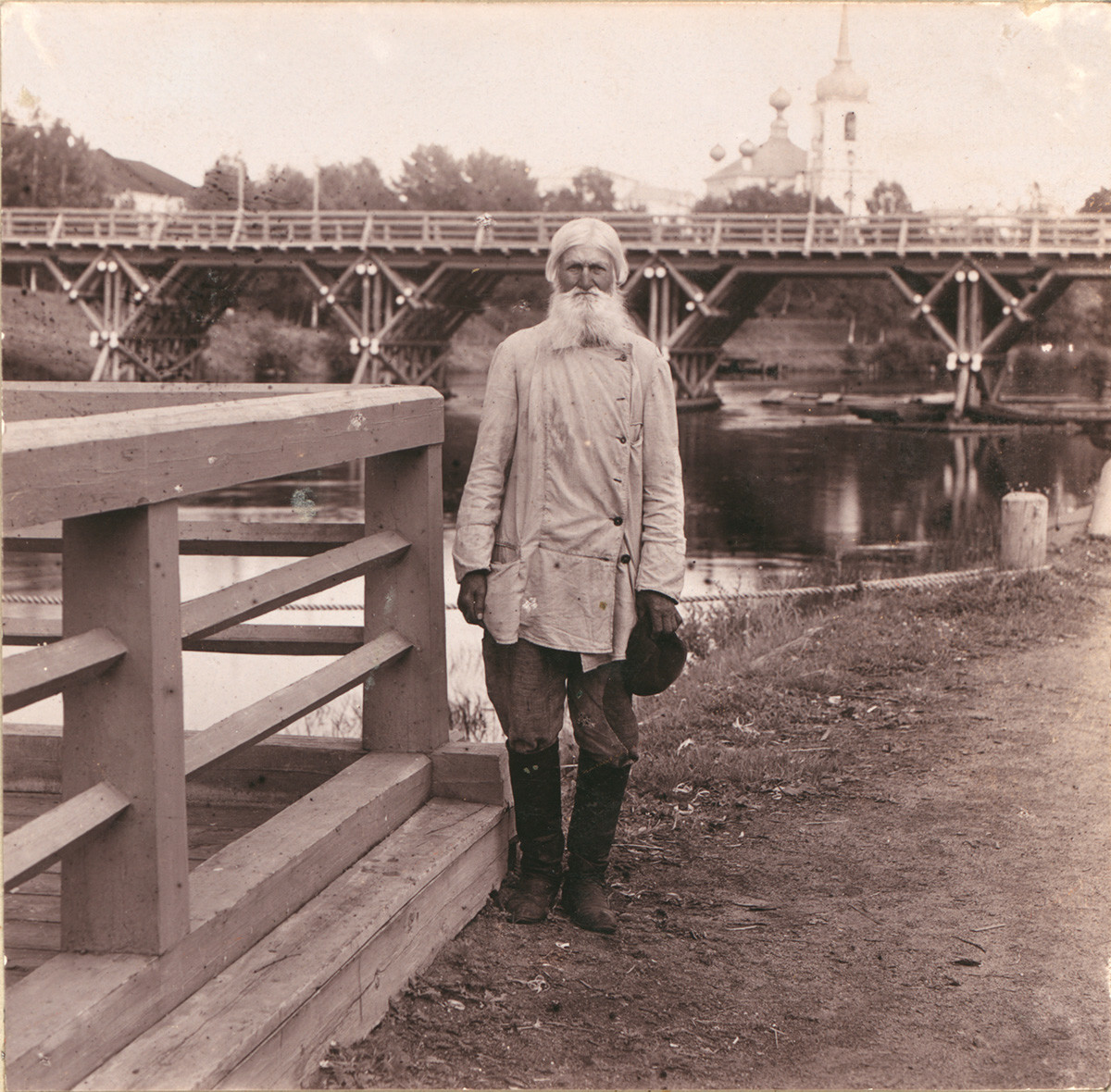 In the early 20th century, the Russian photographer Sergei Prokudin-Gorsky developed a complex process for color photography. Between 1903 and 1916 he traveled through the Russian Empire and took over 2,000 photographs with the process, which involved three exposures on a glass plate. In August 1918, he left Russia and ultimately resettled in France where he was reunited with a large part of his collection of glass negatives, as well as 13 albums of contact prints. After his death in Paris in 1944, his heirs sold the collection to the Library of Congress. In the early 21st century the Library digitized the Prokudin-Gorsky Collection and made it freely available to the global public. A few Russian websites now have versions of the collection. In 1986 the architectural historian and photographer William Brumfield organized the first exhibit of Prokudin-Gorsky photographs at the Library of Congress. Over a period of work in Russia beginning in 1970, Brumfield has photographed most of the sites visited by Prokudin-Gorsky. This series of articles juxtaposes Prokudin-Gorsky’s views of architectural monuments with photographs taken by Brumfield decades later.