Khanty-Mansiysk: Why you simply must visit this northern land of mammoths 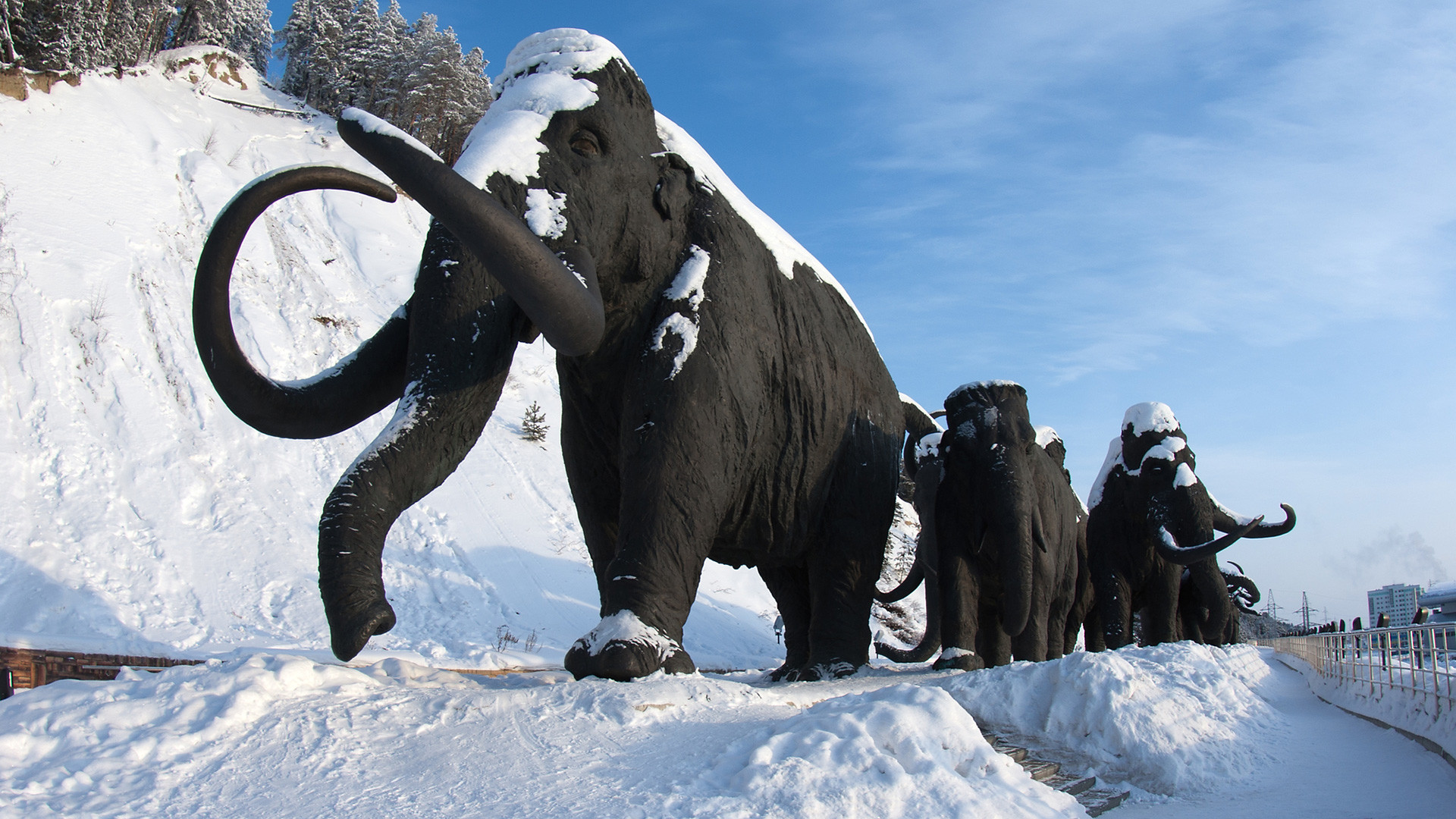 Legion Media
The ancient land of Yugra, now home to the modern city of Khanty-Mansiysk, is filled with the memory of prehistoric people and extinct cave animals. Oil was discovered here in more recent times, turning the regional capital into a modern city that is growing fast but at the same time remains connected to its history and regional culture.

“I have been to Yugra many times. I was sworn in as a Siberian in a cedar forest,” producer Andrey Suleikov writes in the preface to a collection of legends called Yugra. It’s My Land. “I tasted lingonberries in the cold and could not tell whether the berries were coated in sugar or ice. I also enjoyed outdoor hot springs while taking a traditional Siberian bath." 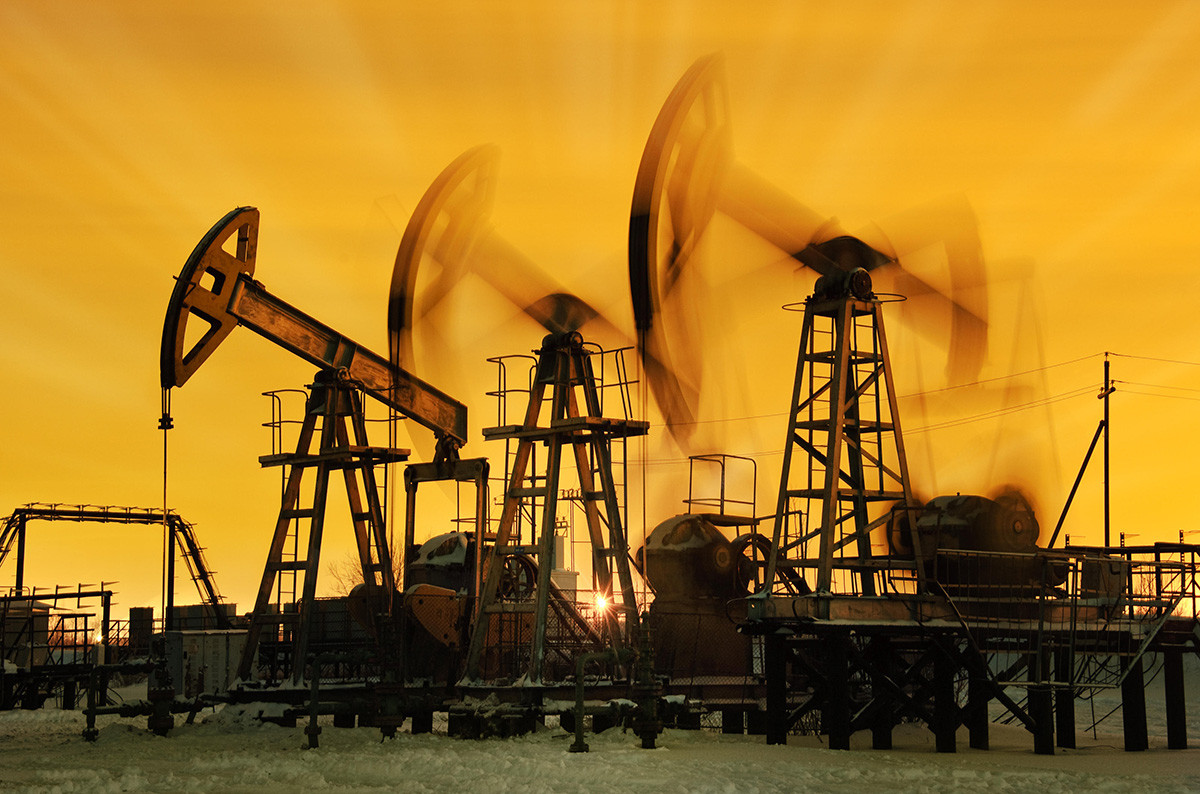 Sounds more like time travel than a present-day tourist trip, doesn’t it? But that is what Yugra is like: a fusion between prehistoric things like mammoths and modernity, which has brought oil, gas and new buildings. Even the region’s official name (which is quite long: the Khanty-Mansi Autonomous Area – Yugra) combines the present with the past. 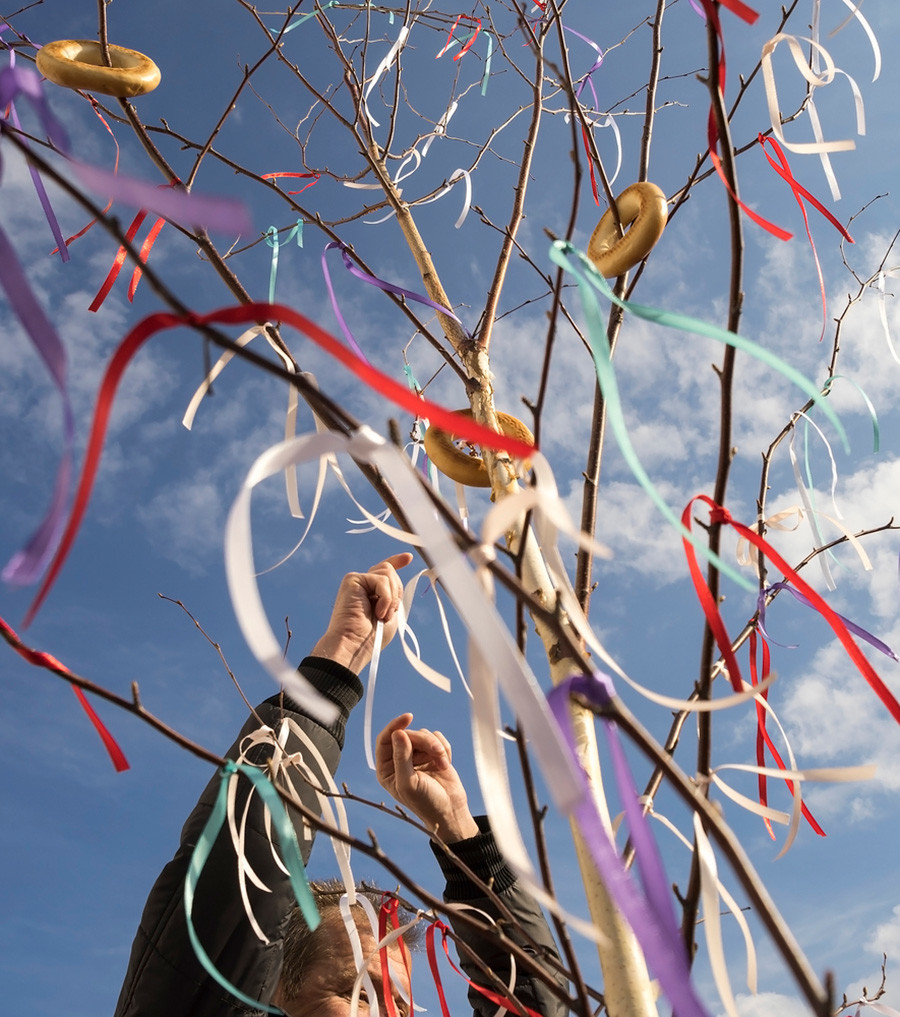 Tying a ribbon is a national tradition

There is a beautiful legend about Yugra’s origins. In one very bright, warm and sunny city, twins of unprecedented beauty were born: a brother named Yug and a sister named Ra. At first, they grew up like ordinary small children, but with age they began to argue and fight, so much so that when they did flames flared up around them. The townspeople were afraid that they would burn everything down, so they exiled Yug and Ra to a remote northern land covered with ice and snow. The brother and sister illuminated this land with their light and made it warm so that people could come here to live. Yug and Ra stopped fighting and began living together in harmony. Since then, this northern land has been called Yugra.

When you look at the map, it may seem that Khanty-Mansiysk is located almost in the middle of Russia. However, the climate here is similar to regions of the Far North. In winter, the temperature here drops to below -40 degrees Celsius.

We asked local residents and people who know this region well to tell us more about it and to share some tips for tourists who come to visit.

Why should a foreigner visit Khanty-Mansiysk?

“If you want to feel the coldness and colors of Russian winter, then you should definitely stop by in our small cozy town,” says a local tattoo artist, Semyon Chepurnoy. 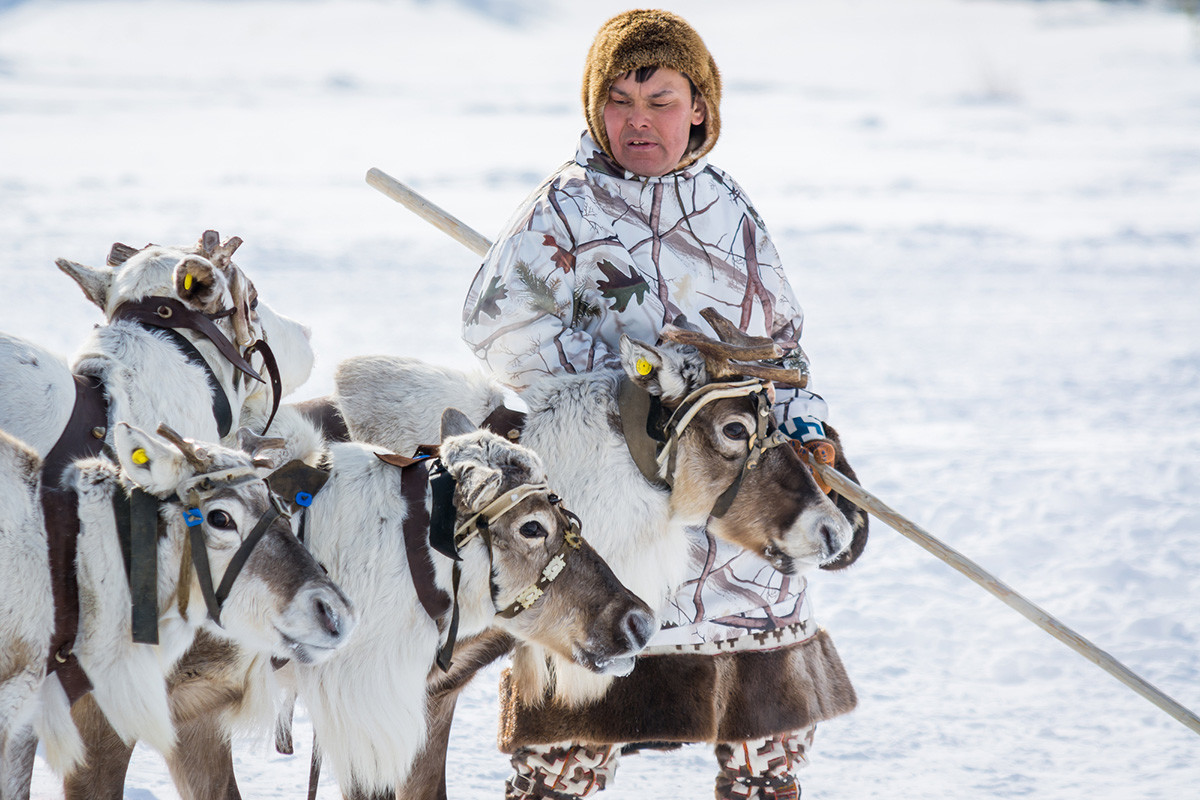 A Khanty man in a traditional dress

Yevgeny Zinovyev, a journalist and the former editor-in-chief of a local media outlet, says that Khanty-Mansiysk provides the opportunity to experience a real and not touristy part of Russia. “In winter, there are frosts, snowdrifts and wind. In summer, heat, midges and bears. At any time of the year, you can experience the everyday life and customs of the indigenous peoples: the Khanty and Mansi. And of course, in Khanty-Mansiysk you can get to know the backbone of modern Russia – its oil and gas sector."

“We have unique scenery here. Khanty-Mansiysk is located on seven hills and is surrounded by the taiga. There are a lot of fish in the rivers, and a lot of mushrooms, berries and pine nuts in the forests surrounding the city,” says local insurance company employee Sergey Yankovich. 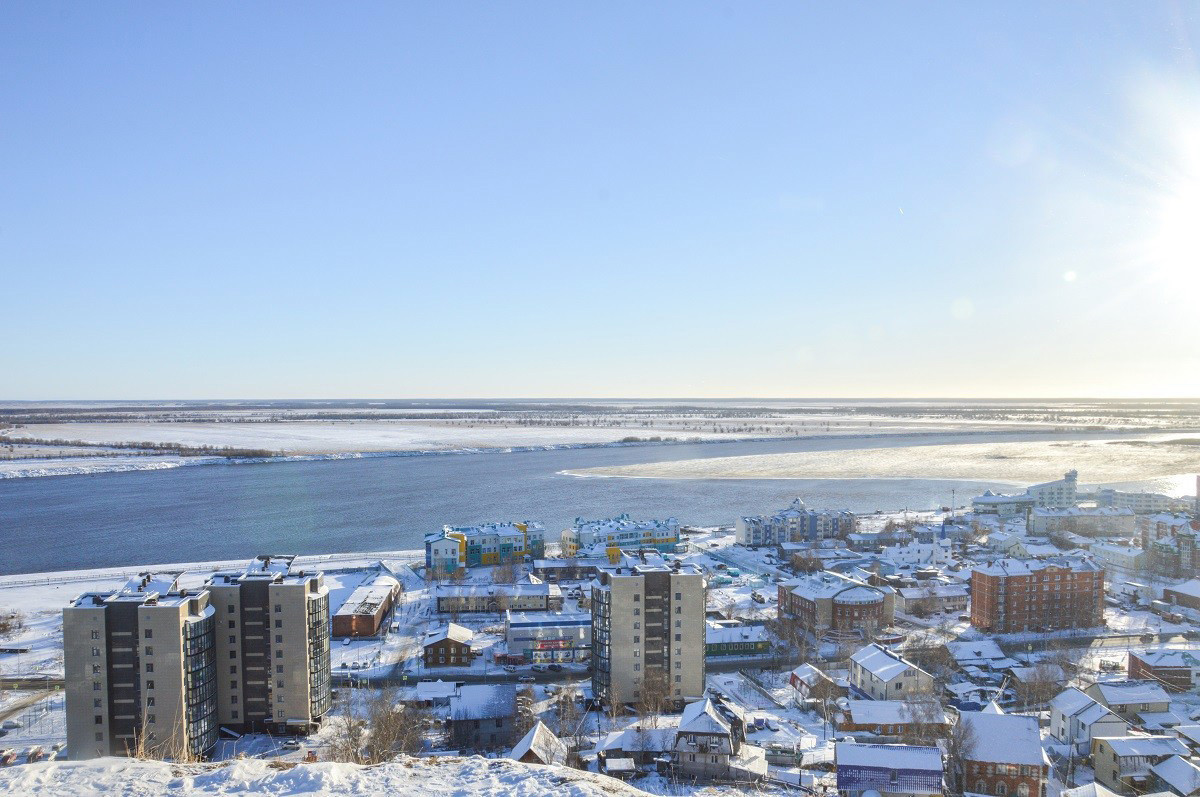 View of the city and the Irtysh River

The harsh climate of the region influences how local residents relate to visitors. “Residents of the city are very good-natured and welcoming and are always ready to offer help in any situation, even to a stranger, because in the north, there is an unspoken rule: If you see that a person is in distress, be sure to help them, because tomorrow, it may be you in their place. The harsh climate and surrounding scenery leave no room for error, especially in winter,” Sergey says.

Things to see/do/taste in Khanty-Mansiysk 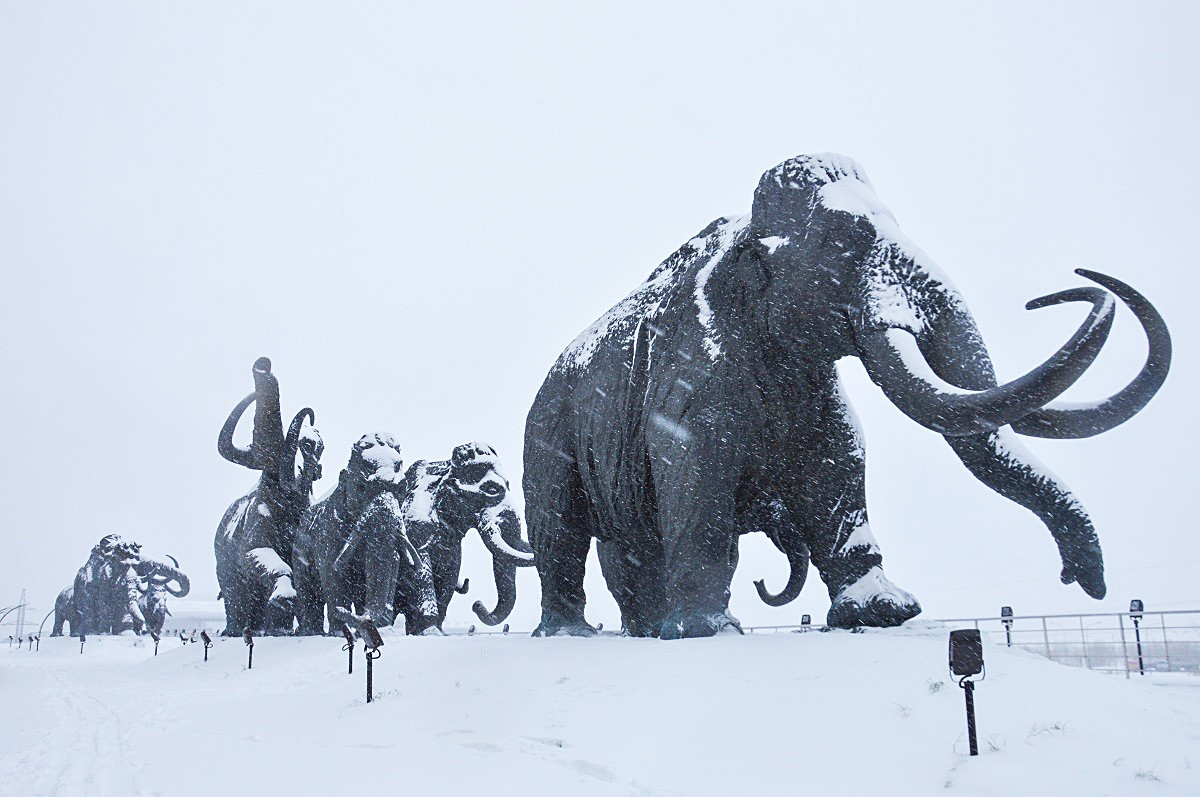 Mammoths at the Archeopark

According to Irina Pudova, a local resident and the author of a collection of legends called Yugra: It’s My land, the first thing to do in Khanty-Mansiysk is to see the local mammoths. Seven life-size bronze prehistoric animals "roam" the area near Samarovsky Hill on the grounds of the Archeopark complex. Here you will also find a prehistoric bison, a pack of wolves, a cave bear, two woolly rhinos and prehistoric people themselves. 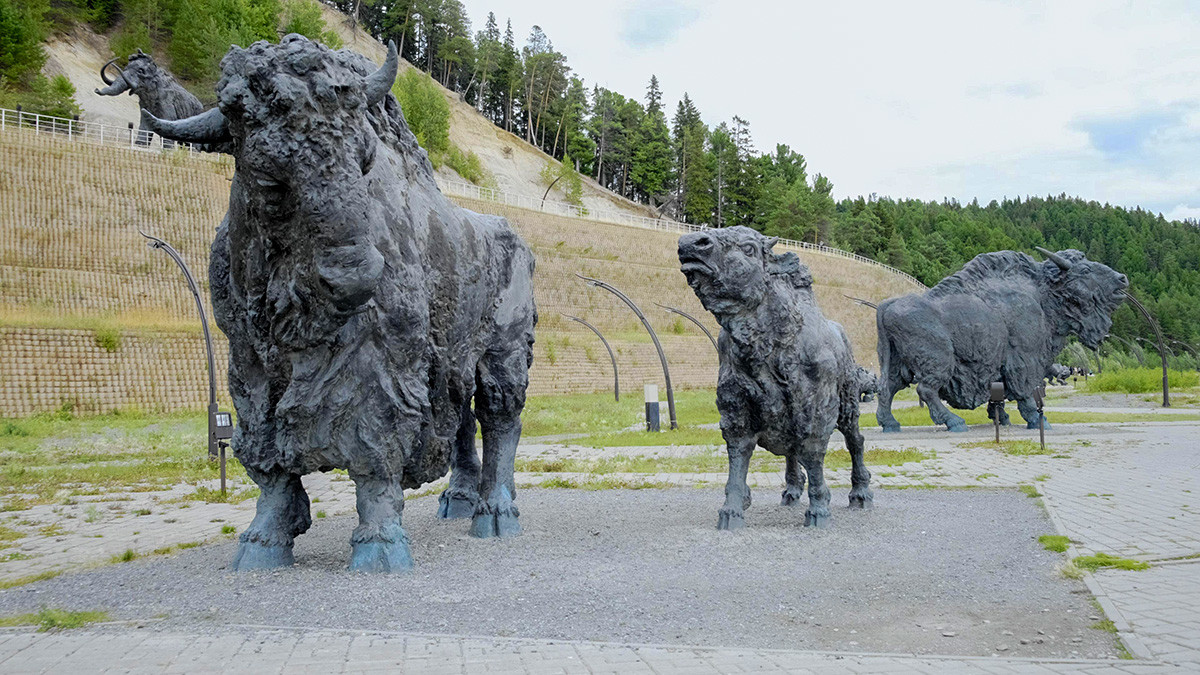 Sculptures of bisons at the Archeopark cultural and tourist complex

“Then you could get something to eat,” Irina advises. “The thing to do is to go to any local restaurant of Siberian cuisine and ask for muksun. It is a valuable freshwater fish of the salmon family, which is highly prized by locals and tourists alike.”

Khanty-Mansiysk is a relatively new city and only received this status in 1950. Soo oil was discovered in the region, prompting a dramatic push in its development. Prior to that, there were just Siberian settlements built by Russia in the late 16th century. Irina is impressed that a modern city was built in such harsh conditions. 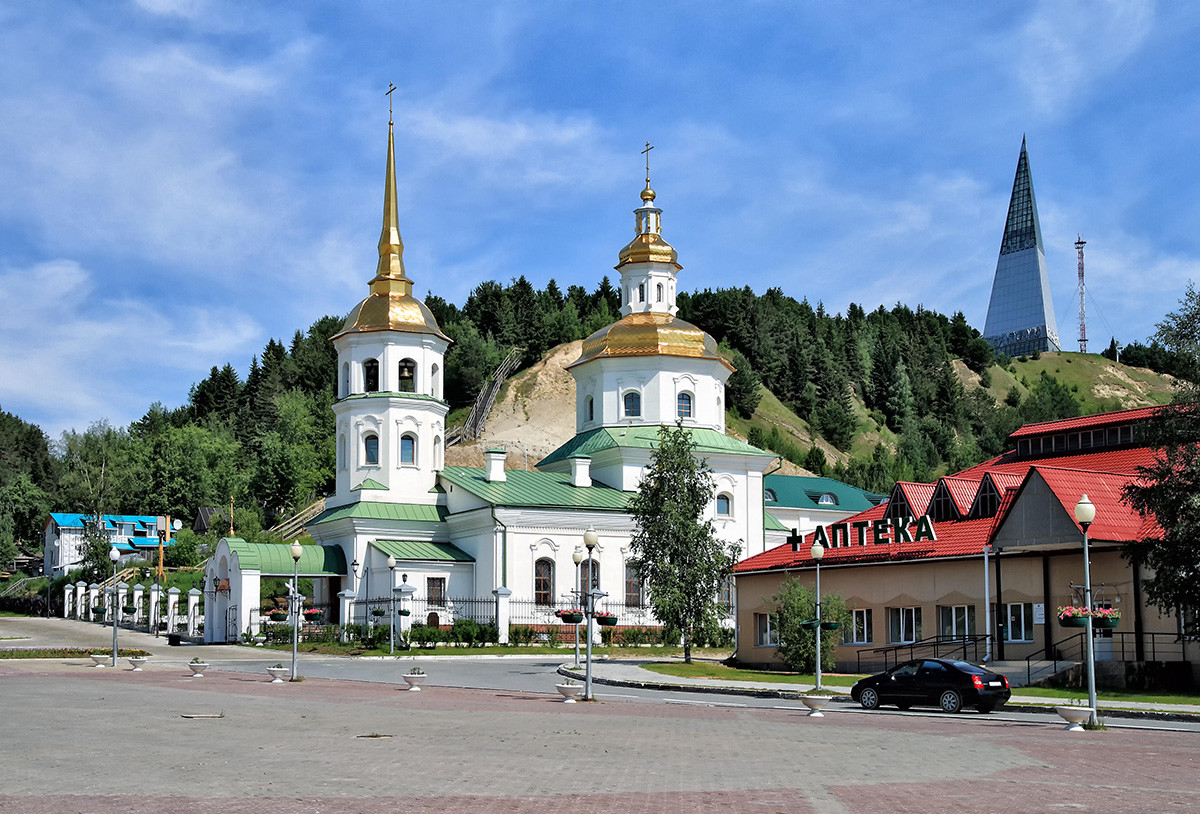 The Church of the Protection of the Holy Virgin

“Cultural objects, squares, houses - all this is unique. And everything is new, there is nothing very ancient here. Except for mammoths!” she says.

In addition to the Archeopark mentioned above, Yevgeny Zinovyev’s list of favorite places in the city includes the Museum of Geology, Oil and Gas, along with the Museum of Nature and Man and the centuries-old cedars in the Samarovsky Chugas natural park. He recommends checking out the views from the observation deck near the Monument to the Explorers of the Yugra Land and paying a visit to a local bathhouse. 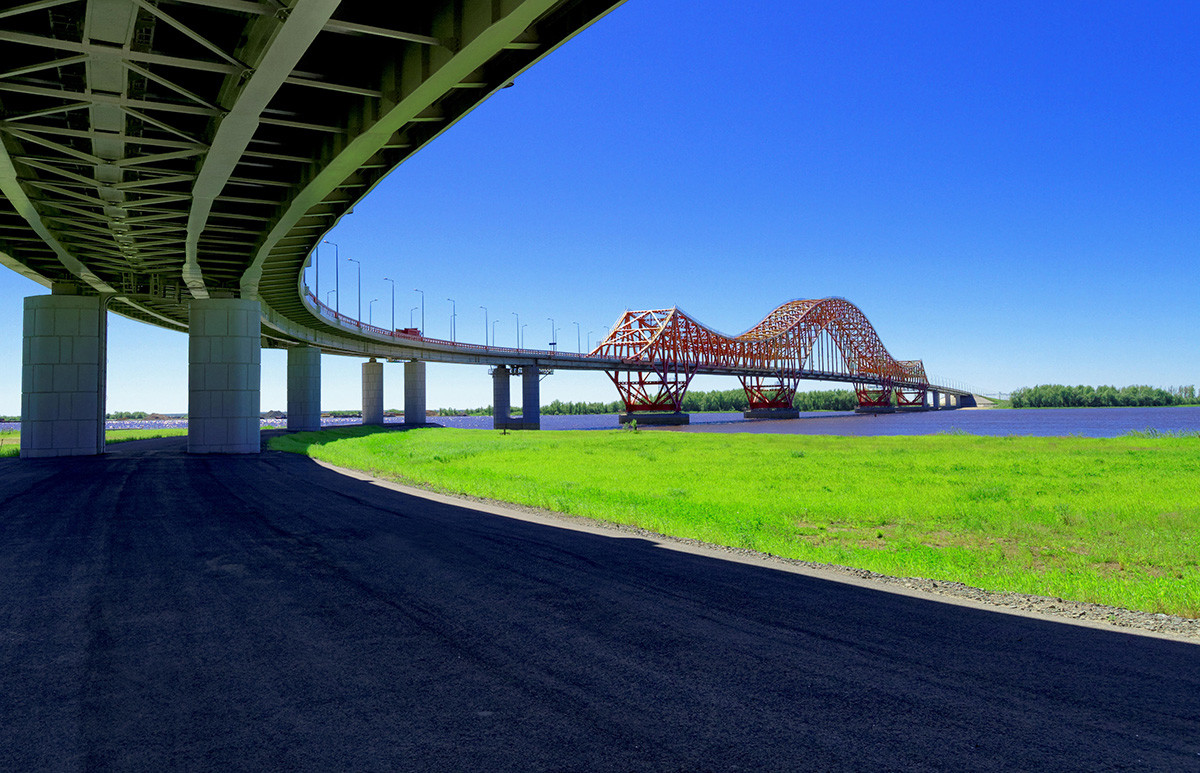 Yevgeny also provided us a checklist of culinary delights that anyone visiting Khanty-Mansiysk should be sure to try:

Sergey Yankovich recommends visiting the open-air ethnographic museum Torum Maa, which means "Sacred Land" in Mansi. “There you can get acquainted with the history of the city and the district, as well as with the life of the indigenous peoples of the Khanty and Mansi, who belong to the Finno-Ugric group,” Sergey says.

In addition, he advises anyone who comes to Khanty-Mansiysk to visit the spot where the Ob and Irtysh rivers meet, pay a visit to Misne Hotel’s restaurant and taste traditional dishes there, as well as dishes prepared by local fishermen and hunters while in the taiga.

According to Semyon Chepurnoy, the Valley of Streams natural park is another must for any visitor. It is one of local residents’ favorite recreation areas, where you can stroll along a dedicated footpath offering stunning views of the city. Semyon also advises trying pancakes at the GoodFood chain of cafes.

“We all love something mystical and supernatural. There is a strong culture of shamanism here, so I think it’s cool to take with you some local amulets charged by a shaman—a bear claw or a pendant made of beads and deerskin,” says Irina Pudova. 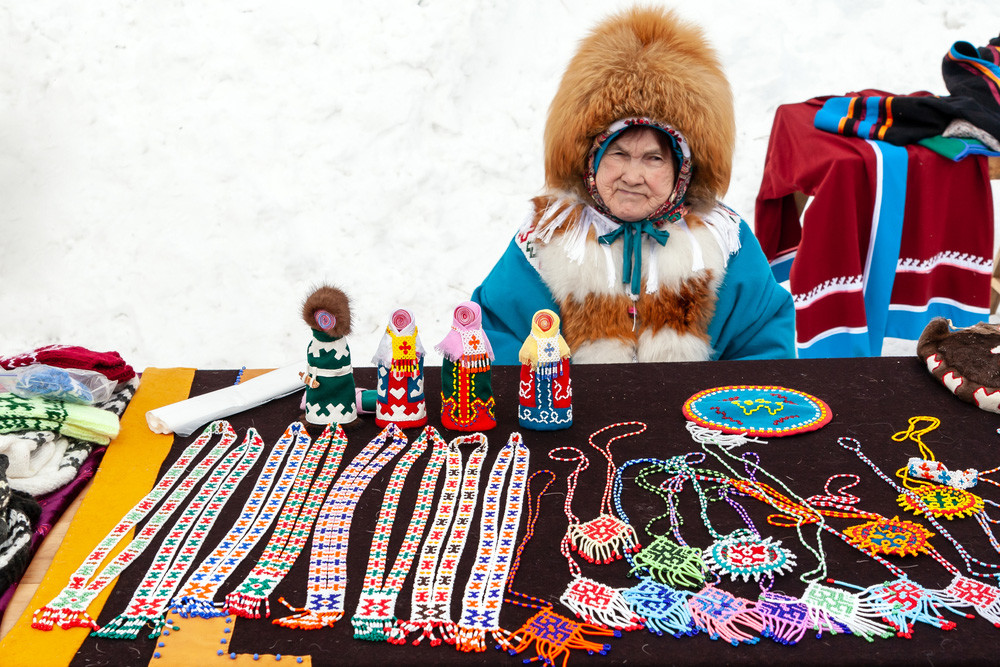 A Khanty woman in the traditional dress selling souvenirs

Sergey Yankovich advises that authentic souvenirs can be found at the Crafts Center on Roznina Street. “There you can also see and even try on the national costumes of the Khanty and Mansi and try to solve traditional puzzles that representatives of the indigenous peoples made for their children.”

According to Yevgeny Zinovyev, the best souvenirs are Khanty and Mansi amulets, clothes, jewelry, as well as traditional local treats such as muksun, wild berries, pine nuts and venison. 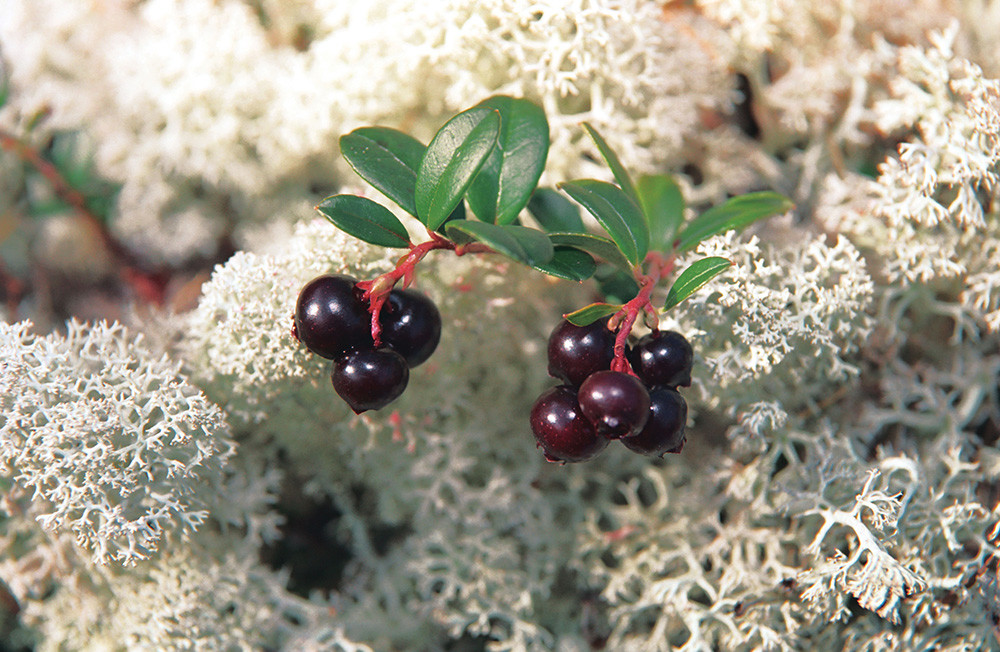 For his part, Semyon Chepurnoy recommends bringing away memories and photographs as well as a little bit of Siberian Frost❄.