Where in Russia can you spend the night inside a… UFO? (PHOTOS) 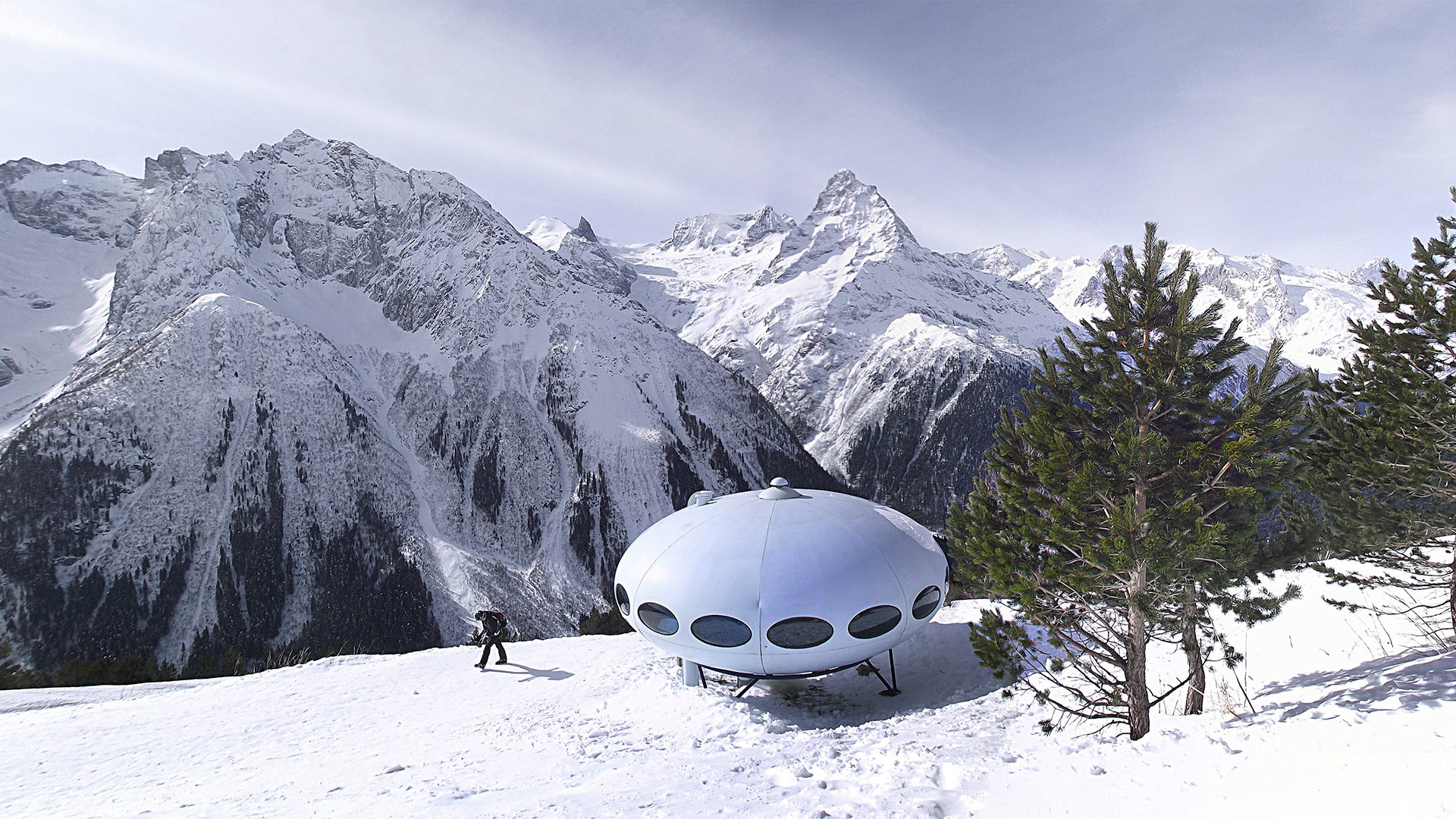 The famous hotel in Dombay.

Getty Images
The ‘Futuro’ UFO buildings may not be genuine artifacts of an extraterrestrial civilization, but they are genuine architectural works of art. And only three remain in all of Russia.

One of the most interesting places in the Caucasus resort of Dombay has got to be the “flying saucer”, which stands on the plateau amid the snowy mountain peaks. And it’s not the only building of this type there.

The idea for constructing buildings in the shape of UFOs was conceived by Finnish architect Matti Suuronen in the mid-1960s - a time when humanity found great inspiration in space flight and discussions of our future among the stars. That is how the ‘Futuro’ series appeared. The building measures four meters (13 feet) high and 8 meters (26 feet) in diameter. It was constructed out of fiberglass-reinforced polyester plastic, polyester-polyurethane and poly(methyl methacrylate), had a chimney for heating, a kitchen and en-suite facilities. The result was a mobile construction that was easy to erect and fit for winter living (snow would just slide off the roof).

The “flying saucers” gained a fanbase across the world, from the U.S. to Taiwan. However, with the 1970s oil crisis in full swing, the price of plastic soared and the ‘Futuro’ project was shut down, in order to cut losses. Modern estimates suggest that some 60 units remain in the world (of the just under 100 that were built during the 1960s-1970s), most of which have turned into derelict monuments to avant-garde architecture.

And three of these “UFOs” can be found in Russia! 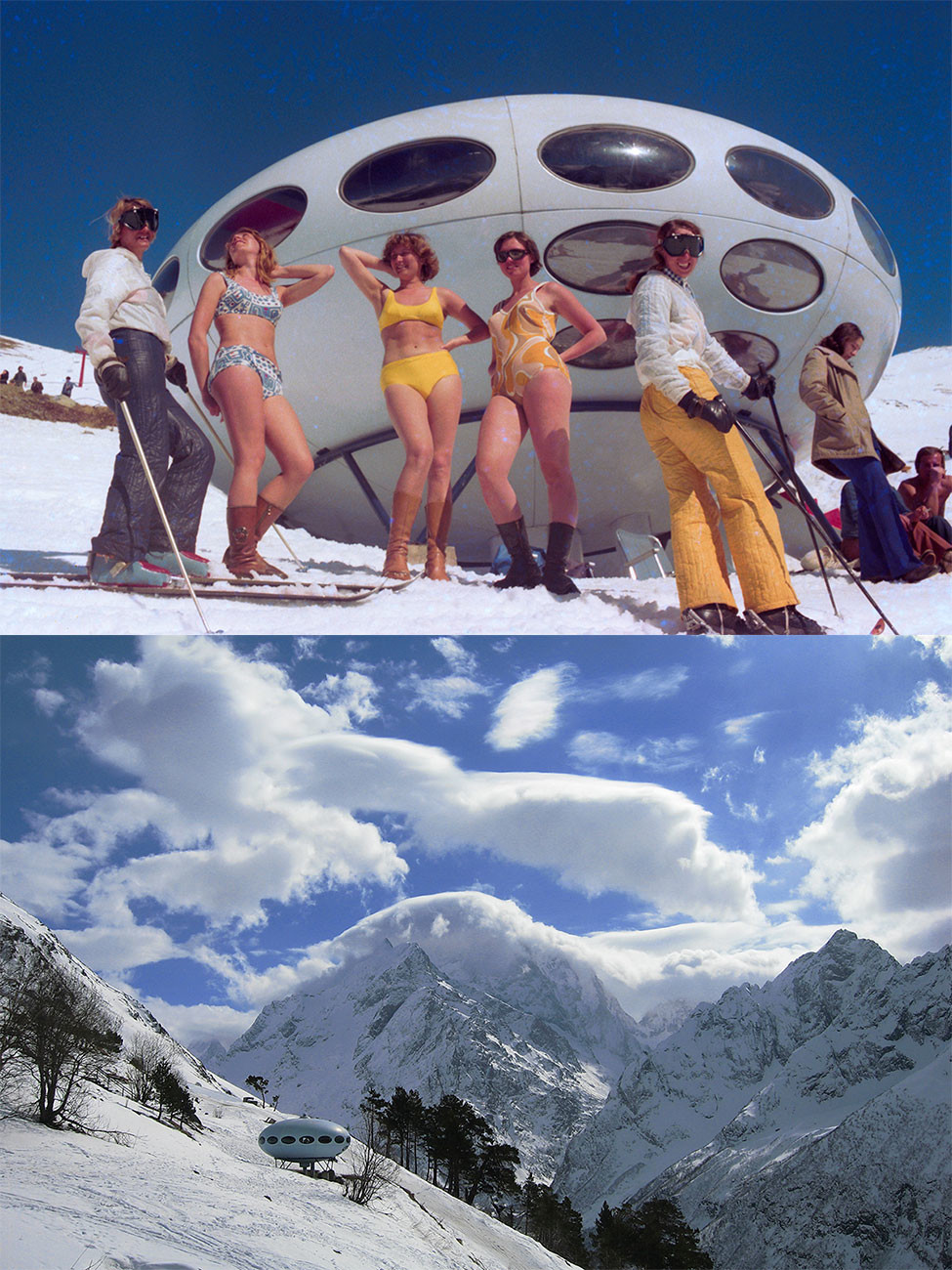 The hotel in the Soviet times and nowadays.

This highland hotel called 'Tarelka' is among the few cases where a weird building is used according to the architect’s original plans - in this case, accommodation for skiers and snowboarders. The hotel was the first of three buildings to appear - it was a present from Finnish President Urho Kekkonen, who was an avid skier.

Dombay used to be very popular among Soviet skiers. In the 1960s, a resort was built there, boasting great infrastructure. Kekkonen visited numerous times and decided to present the resort with his special creation.

The hotel functions to this day. The building was recently relocated 250 meters higher, closer to the ski lifts. It is only available to rent as a whole unit and can accommodate up to six guests. The cost is 15,000 rubles (approx. $200) per night, which includes breakfast and dinner. 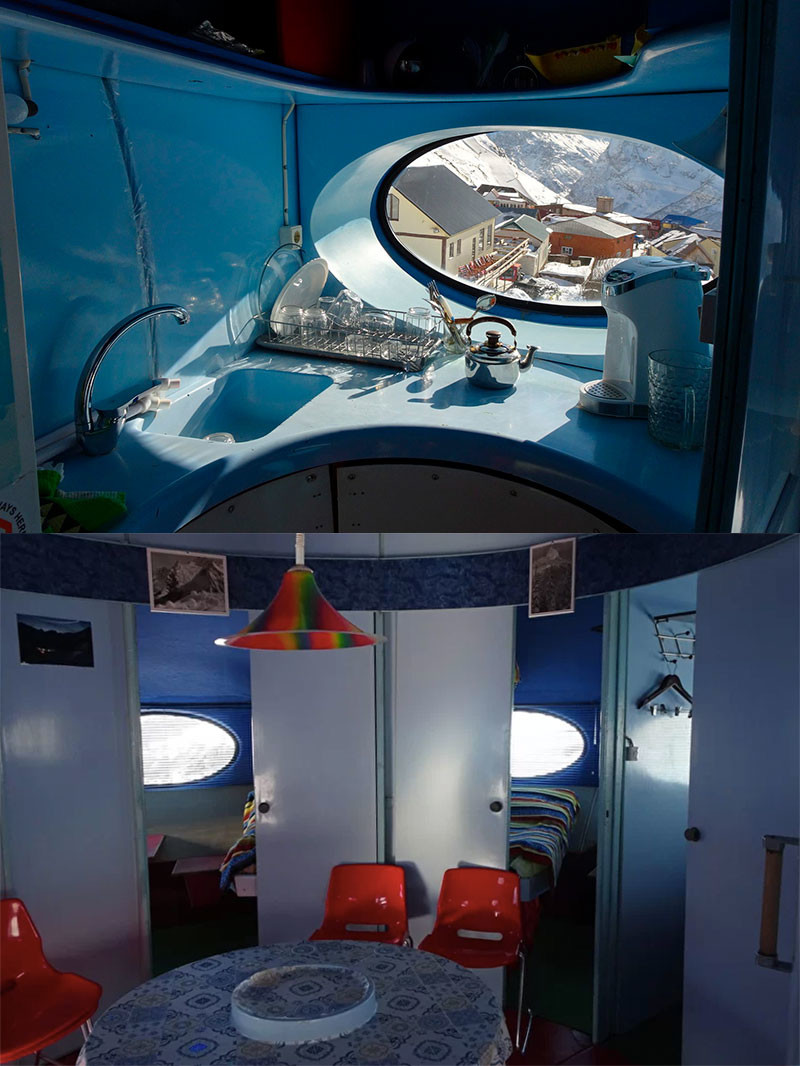 That's how 'Tarelka' hotel looks inside.

Now, where the other two “flying saucers” came from remains a topic of debate. One version is that Kekkonen gifted not one, but three buildings to the resort. Another is that the USSR decided on purchasing several of them for the 1980 Olympics: They were to supposedly house souvenir kiosks and cafes, but the Soviet invasion of Afghanistan resulted in the kinds of sanctions that only three of the Futuro buildings managed to be purchased before the financial situation deteriorated. 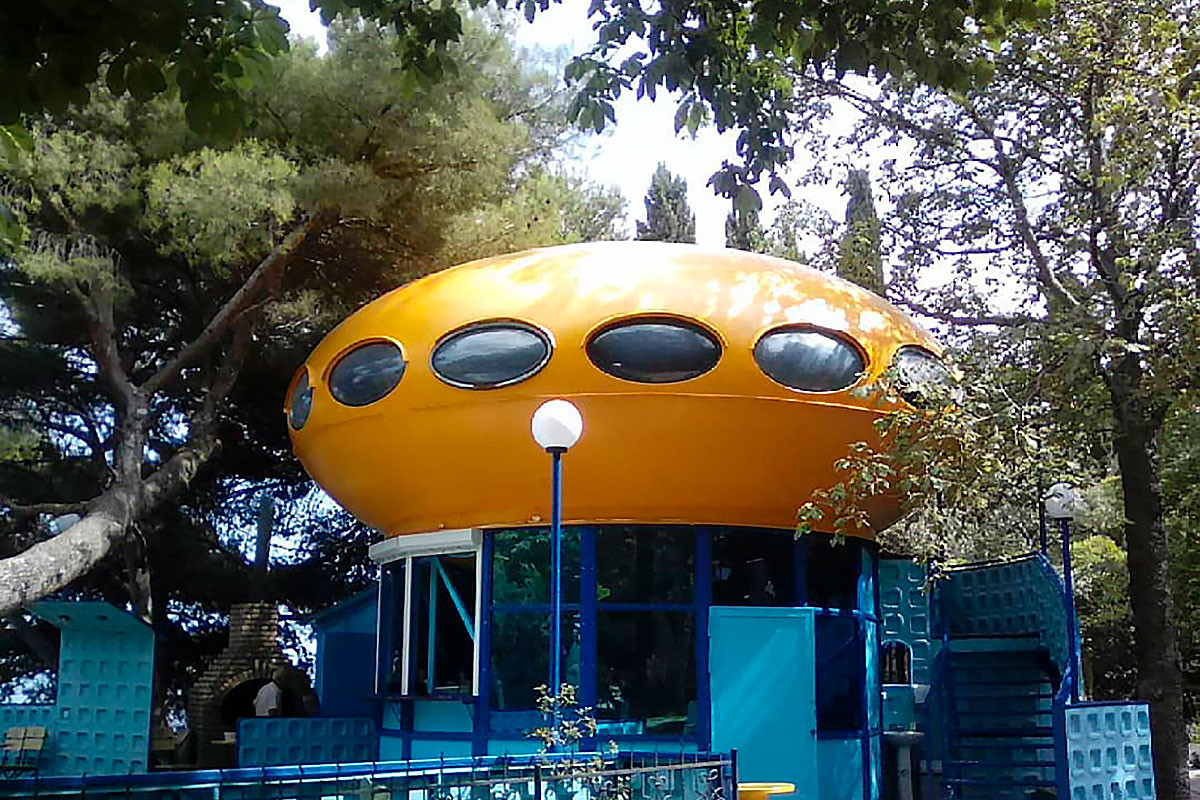 The cafe, whose name literally translates as “saucer/plate”, is situated in the Crimean city of Gurzuf (Naberezhnaya Street, 7). Tarelka appeared there 30 years ago, in the late stages of the Soviet era. Around it is a wonderful park, right on the Black Sea coast. It used to be part of the ‘Sputnik’ All-Soviet Youth Center (today, it is the ‘Sputnik’ wing of the ‘Pushkino’ spa hotel).

In the 1990s, the building housed an elite restaurant that gradually lost its status and was eventually converted into a disco bar. The view that opened up from the veranda was truly marvelous! There were numerous private attempts at returning the building to its former glory, but the crowds never really took to it. Today, it tries to reel in customers with promises of BBQs with a view.

In the western district of Krasnodar, another Futuro “flying saucer” was built. Located at  Atarbekova Street, 54/1, the building became a prominent spot in this residential area with its otherwise neverending apartment blocks. Similar to the building in Gurzuf, it stands on a tall base, which houses the main hall and the kitchen.

At first, the building belonged to ‘Sputnik’, a popular ice cream cafe. In the 1990s, it was turned into a squalid bar. It would change owners and names throughout the years, serving as bars, storage spaces and even a household chemicals store.

In later years, the building presented itself as a tea-drinking cafe, for which it is now known as ‘Chaynaya Tarelka’ (‘Tea Saucer’), boasting a wide variety of teas and absolutely stunning interior design: red and yellow walls and comfy couches with different-colored pillows around the perimeter. The reviews were also very positive, with people loving the atmosphere. 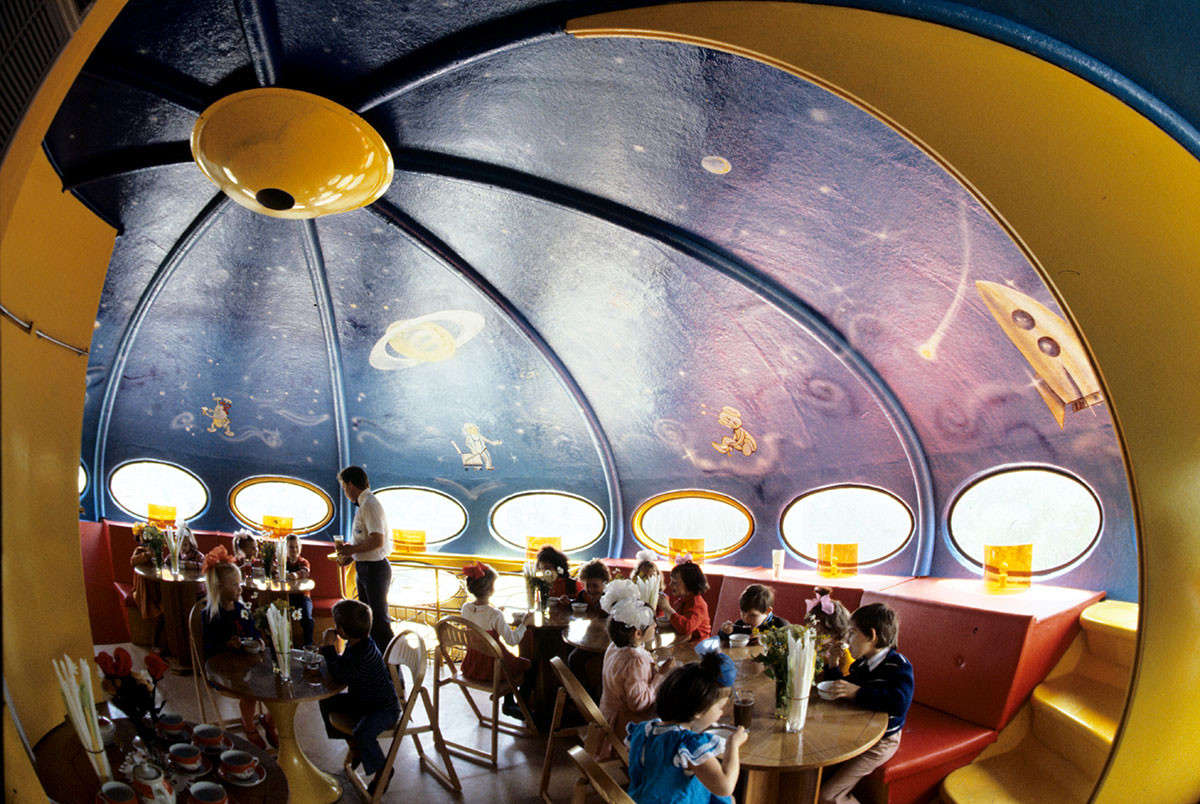 Sadly, the cafe also closed down. Today, you’ll find fruit and vegetable sellers around the building.