The log houses of the Russian North: A vision of beauty 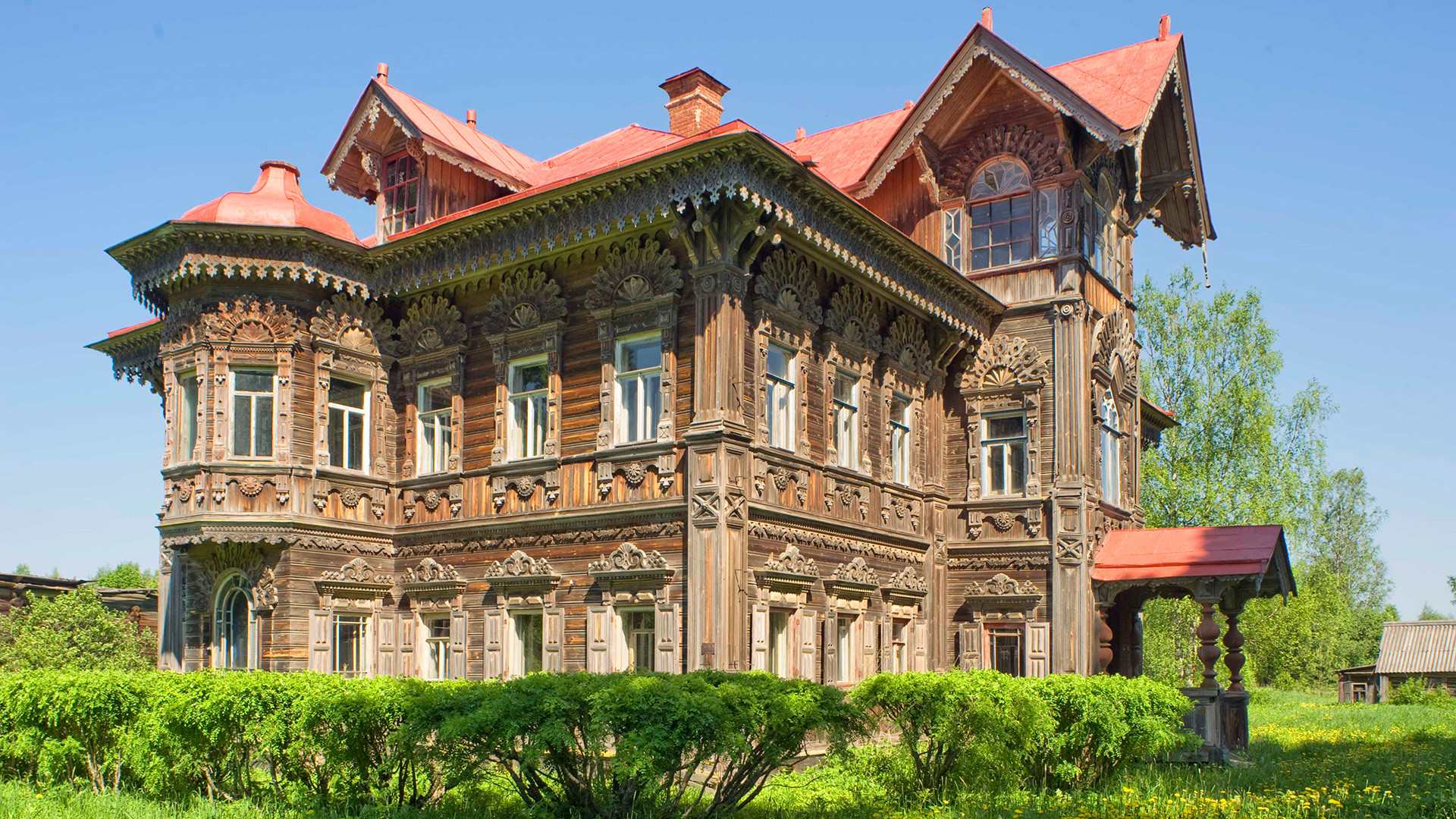 In the late summer of 1916, as the Great War raged in Europe, Russian chemist and photographer Sergey Prokudin-Gorsky embarked on the last of his many expeditions to document the diversity of the Russian Empire. His special passage during these difficult times was enabled by a commission from the state to photograph railroad construction north along the White Sea to the new port of Murman (now Murmansk). The port had been established at the northwestern corner of the Kola peninsula to receive Western military supplies for the hard-pressed Russian armies. 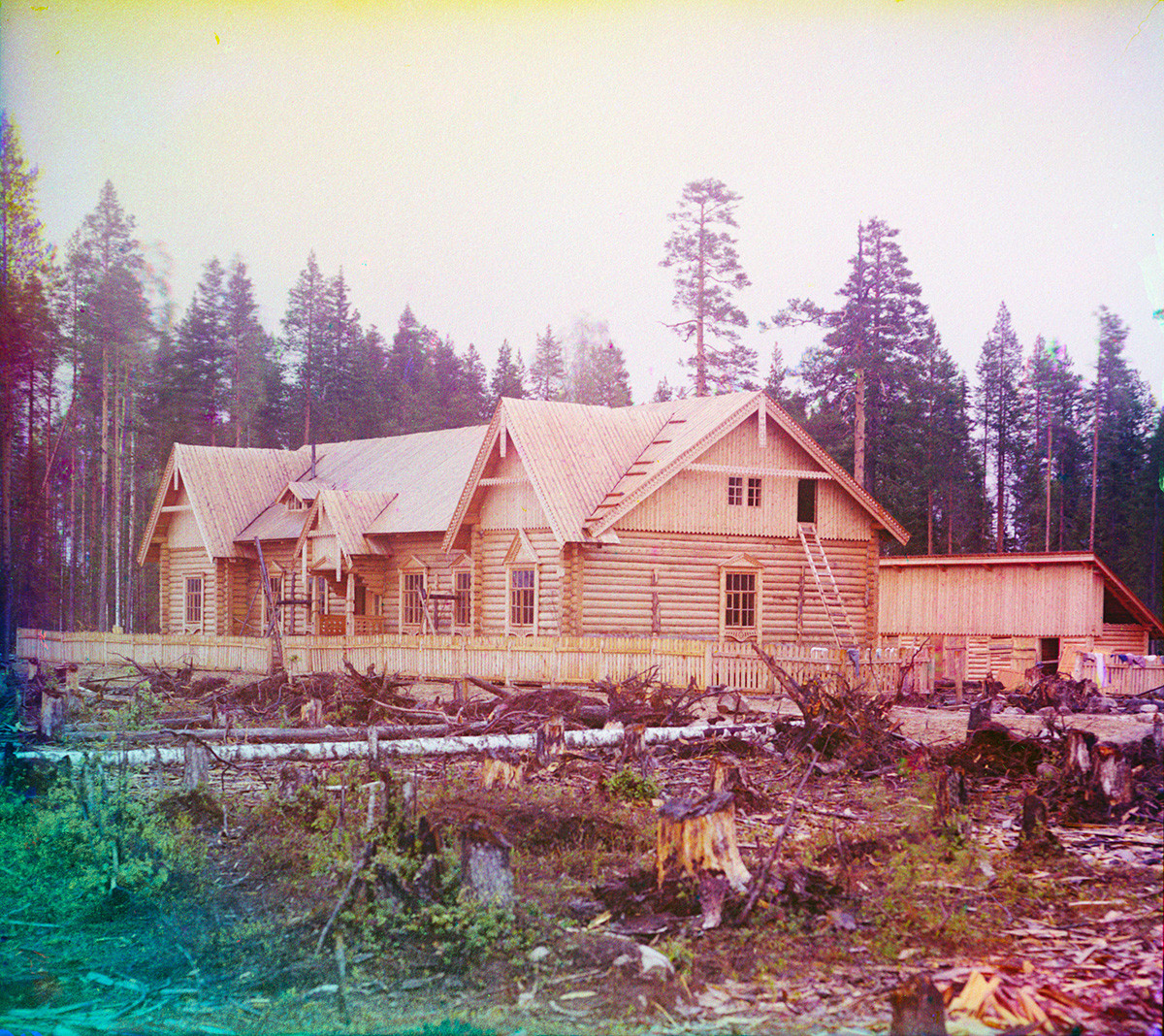 Among the stations photographed by Prokudin-Gorsky was Maselskaya, built as a large depot north of Petrozavodsk. His two views include the new station building and a row of houses behind. The use of standardized designs permitted rapid construction, and yet the buildings were notable for their use of stout pine logs to create well-proportioned functional forms with traditional detailing. 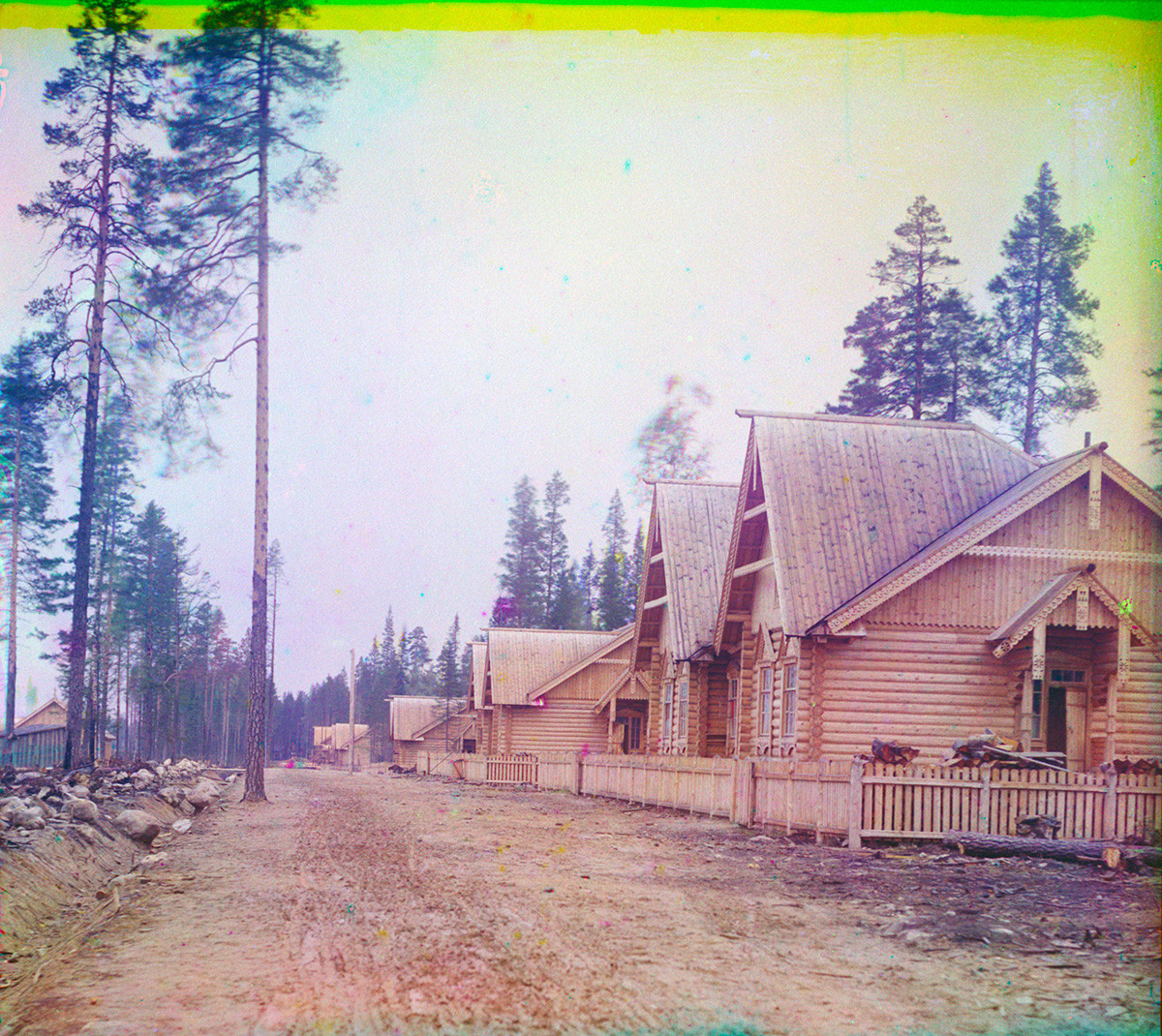 During World War II, Maselskaya Station was at the northern edge of the territory occupied by Finnish forces, which were allied with Nazi Germany until late 1944. This severed the strategically vital connection from Murmansk to Leningrad and Moscow.

Nonetheless, the line from Murmansk continued to function as a major conduit for Lend-Lease supplies by using a recently completed route around the south shore of the White Sea that connected with the Arkhangelsk-Vologda line leading to Moscow.

In the aftermath of the war and with a decreasing local population, the station that Prokudin-Gorsky had photographed was abandoned. However, the flair for log construction seen in his photographs is beautifully evident elsewhere.

Within the vast forests of northwest Russia, there is a small area near the town of Chukhloma in Kostroma Province that contained highly distinctive examples of wooden houses. One of the most remarkable of these houses still stands at the former village of Pogorelovo near the Viga River. 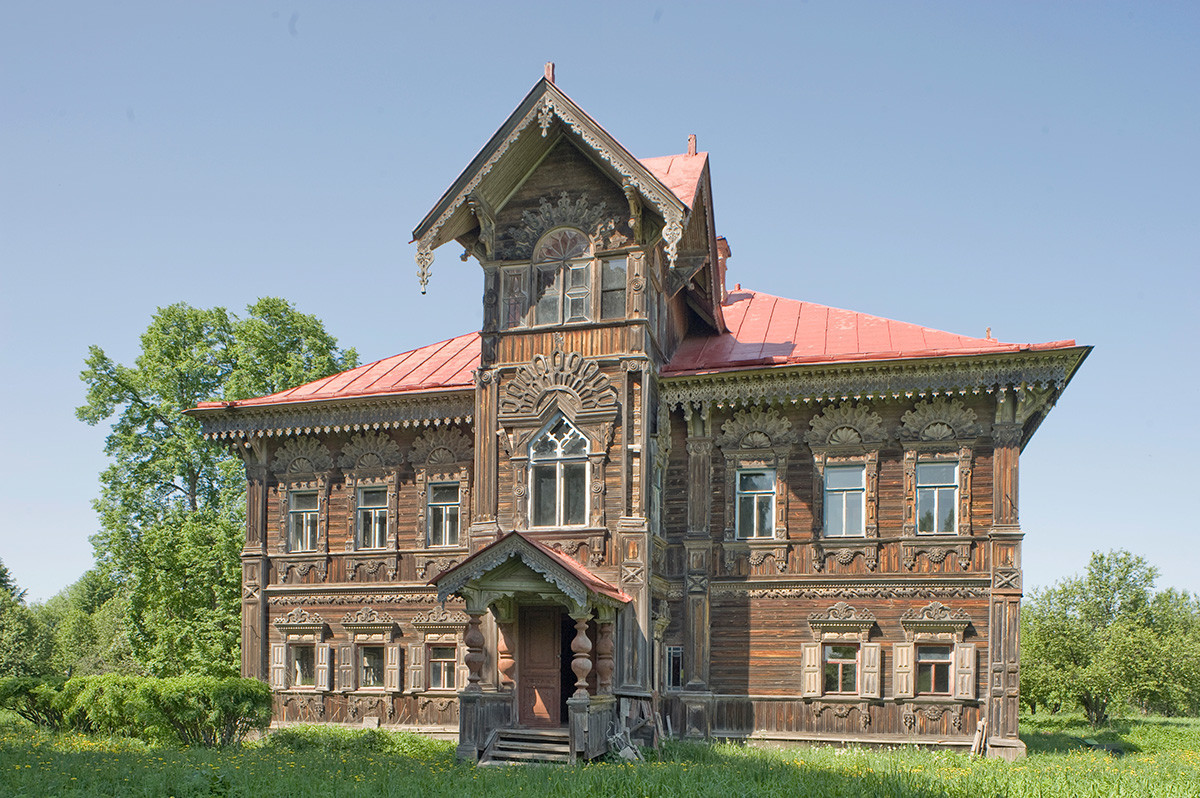 The mansion at Pogorelovo was built at the turn of the 20th century (perhaps 1902) by Ivan Poliashov, who had left his village in the Chukhloma forests to work as a carpenter in the St. Petersburg building boom. Thanks to his native abilities and hard work, Poliashov became a wealthy contractor, but he remained devoted to his origins and decided to display his wealth exuberantly in the design of a grand wooden edifice back in his home village.

The Poliashov house — a massive log structure with richly decorated plank siding — has largely withstood the ravages of time, both on the exterior and on much of the interior. This happy fate is due in part to differences in design and in part to the exceptional story of an artist who lives to preserve the house, even though the village that once surrounded it has disappeared. 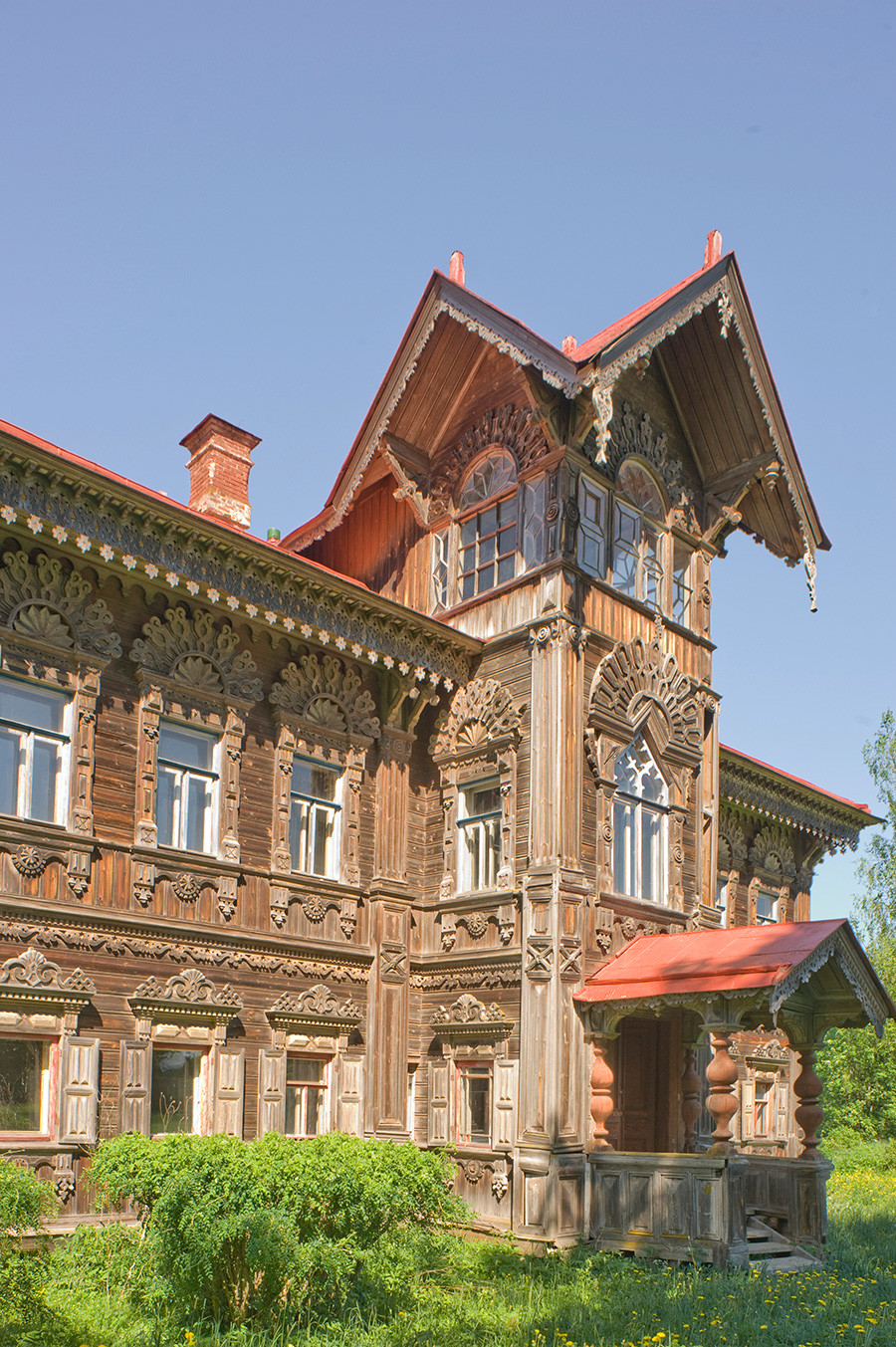 Ivan Poliashov was born apparently in 1850 to the peasant Ivan Dmitrev. Known as Ivan Ivanov, he assumed the name Poliashov when he went to work in St. Petersburg. In 186,8 he married Evdokia Yegorova with whom he had two sons and two daughters. Although his work in the construction trade flourished in St. Petersburg, he also developed enterprises in Pogorelovo, including a profitable water mill and logging operations.

Poliashov’s first wife died at the end of the 19th century, and in April 1904, he married again. His second wife, Maria Suvorova, was a 26-year-old priest’s daughter from the village of Vvedenskoe. This second marriage produced three sons and three daughters. 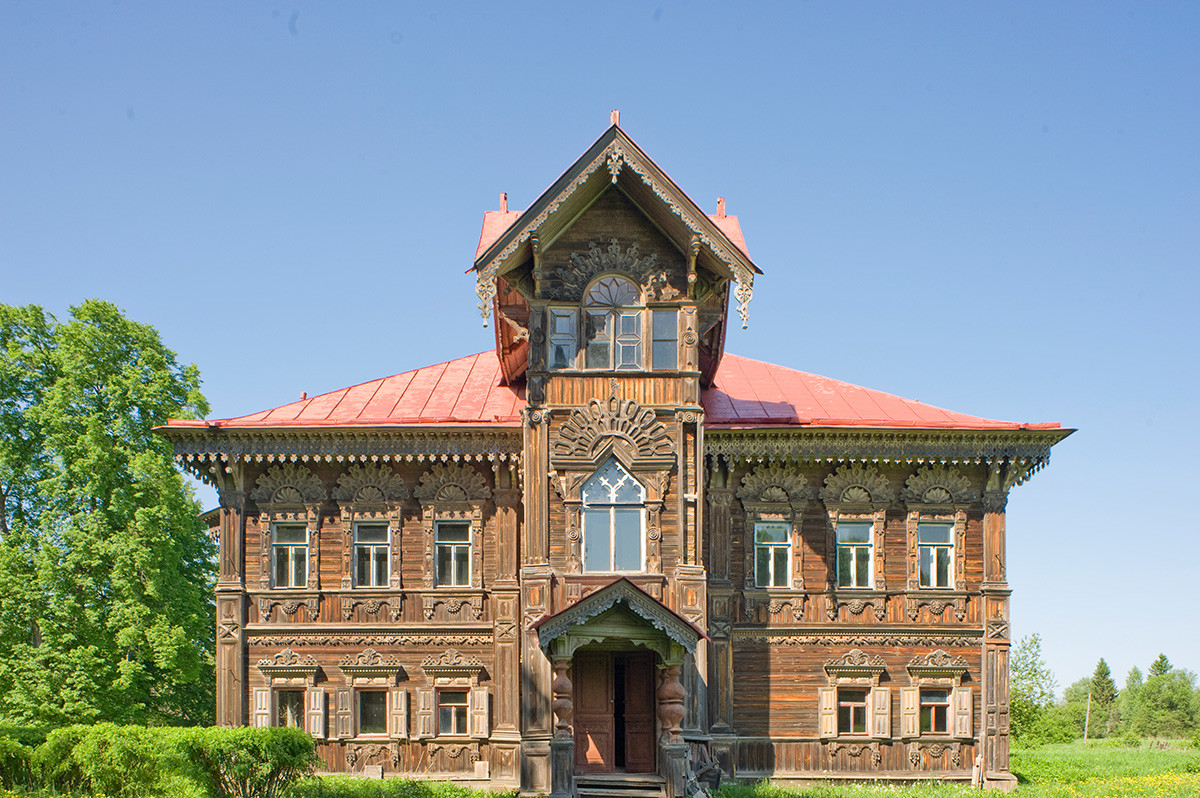 After the establishment of Soviet power, Poliashov’s property was expropriated, but he continued to live in one room of the house and even played a managerial role in the sawmill that he had built. He died in 1935 and was buried in the cemetery of the Church of St. Nicholas at nearby Dorok. 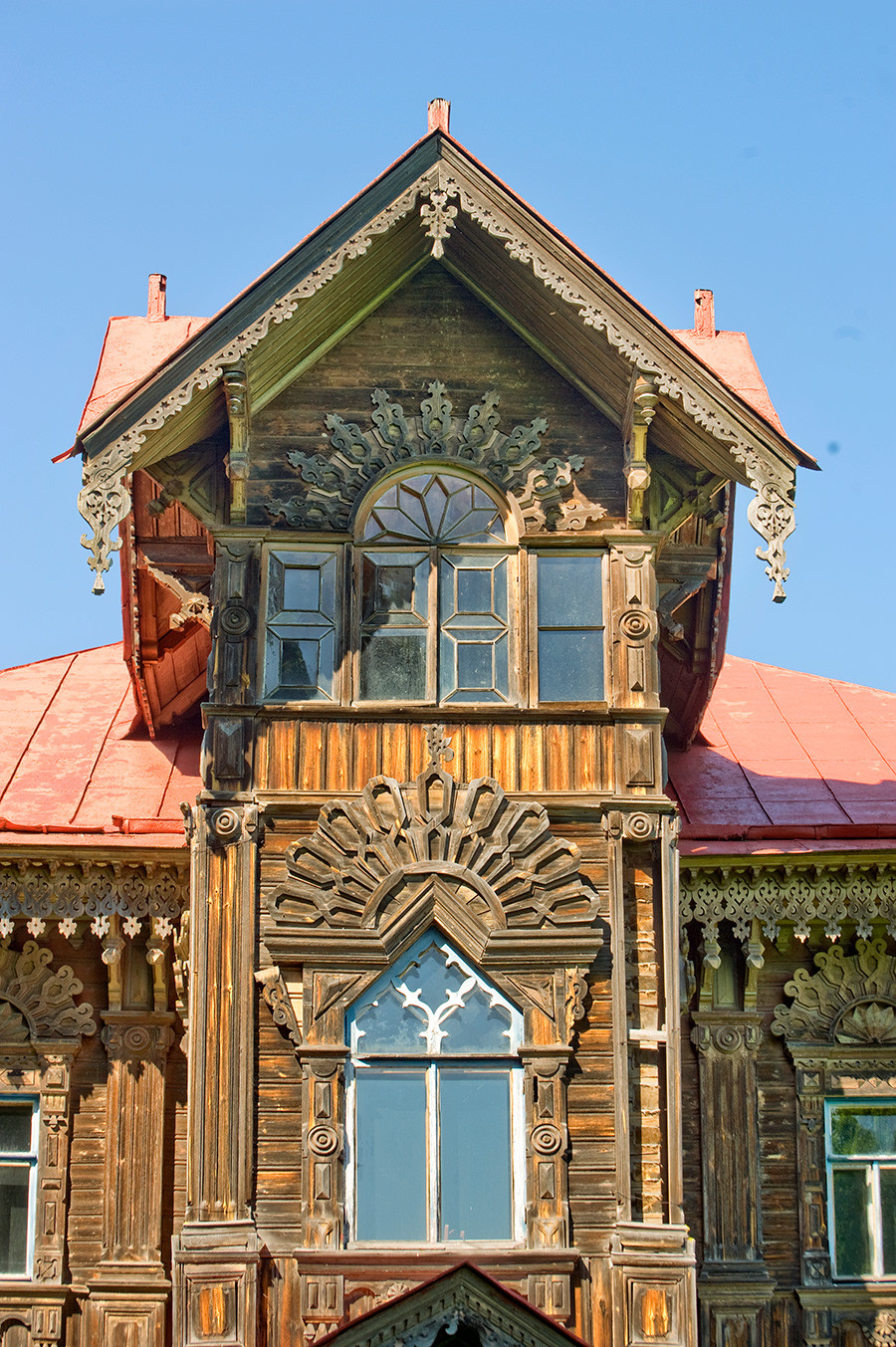 On first glance, the exterior of the Poliashov house seems a bit rustic, yet its façade decoration demonstrates the influence of urban design in details such as window surrounds with baroque flourishes. Indeed, the late 19th-century taste for wooden buildings with decorations suggestive of Russian traditions was chic among wealthy entrepreneurs. Often referred to as the “Ropet style” (after the artist Ivan Ropet), this style in many ways resembles what is known in the West as “Carpenter Gothic.” 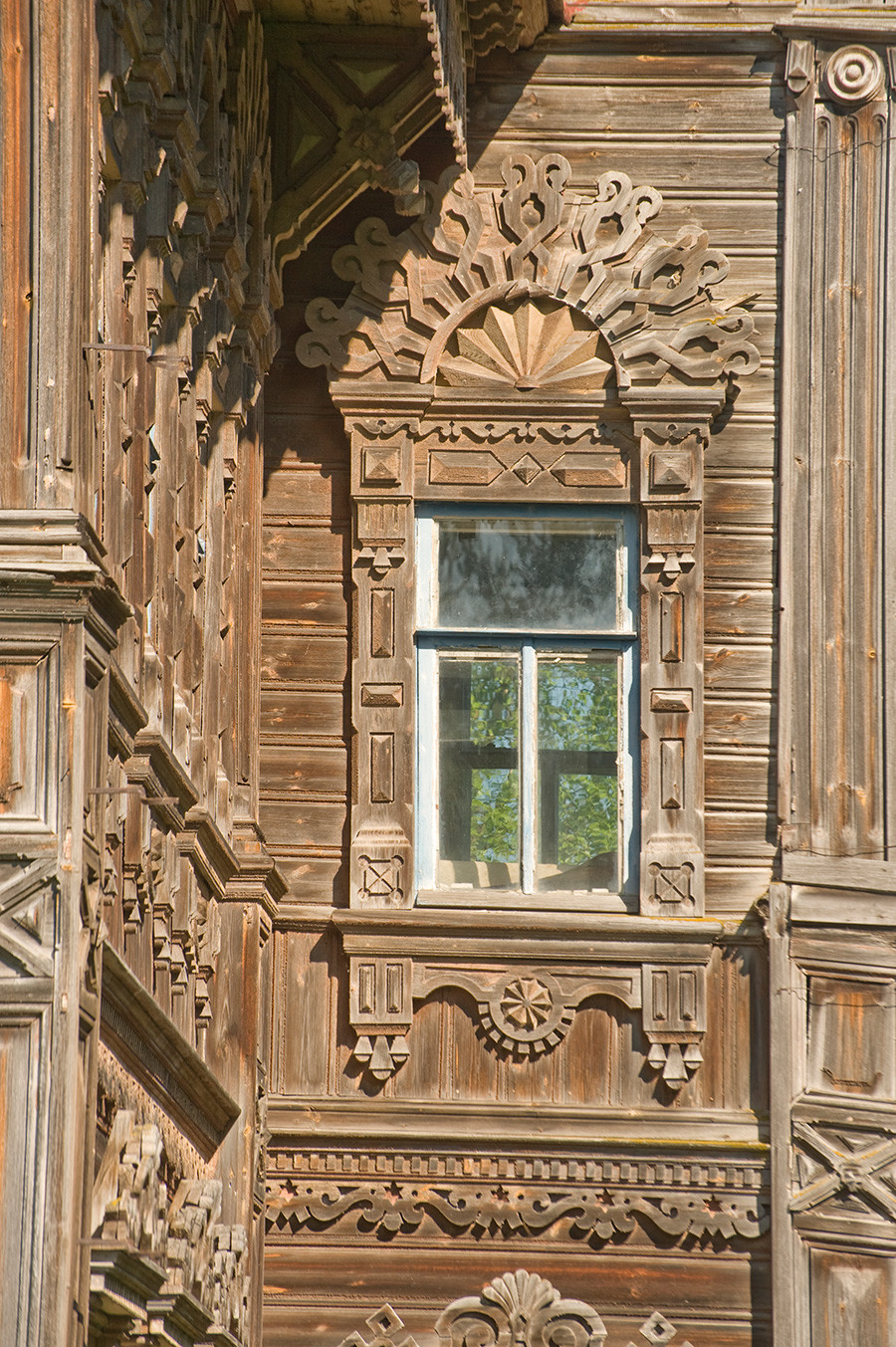 The main entrance to the house is emphatically proclaimed by a tower in the center of the south façade, which received the most sunlight. Particularly notable are the elaborately carved semicircular ornaments above the windows of the second story, which serves in the classical manner as a bel etage, or floor containing the main living space. These ornamental window pediments — which can be said to resemble sun bursts, a woman’s festive headdress (kokoshnik) or even a display of peacock feathers — proclaim the prosperity of the house’s owner and builder. 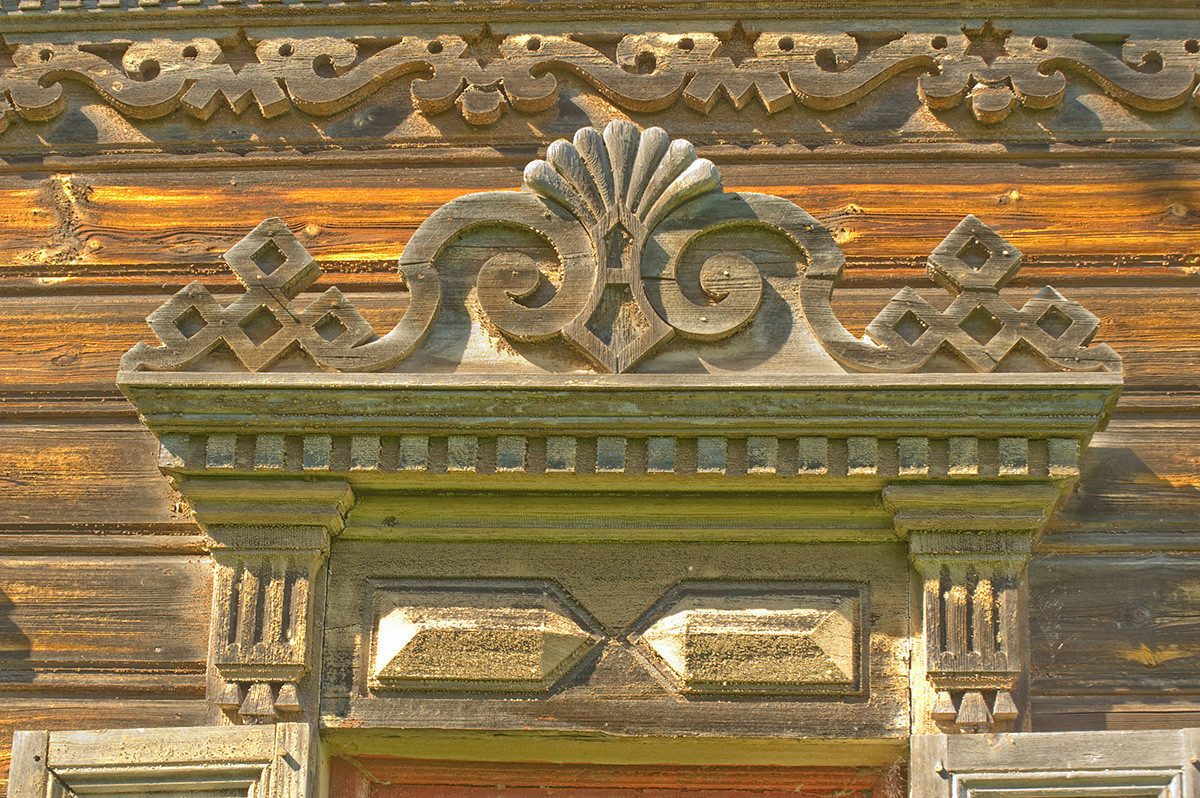 The second story culminates in an intricate decorative cornice. The structure is crowned with a half-story, whose structural components function as a belvedere. The plasticity of the structure is emphasized by projecting bays, verandas, dormers, and loggia. 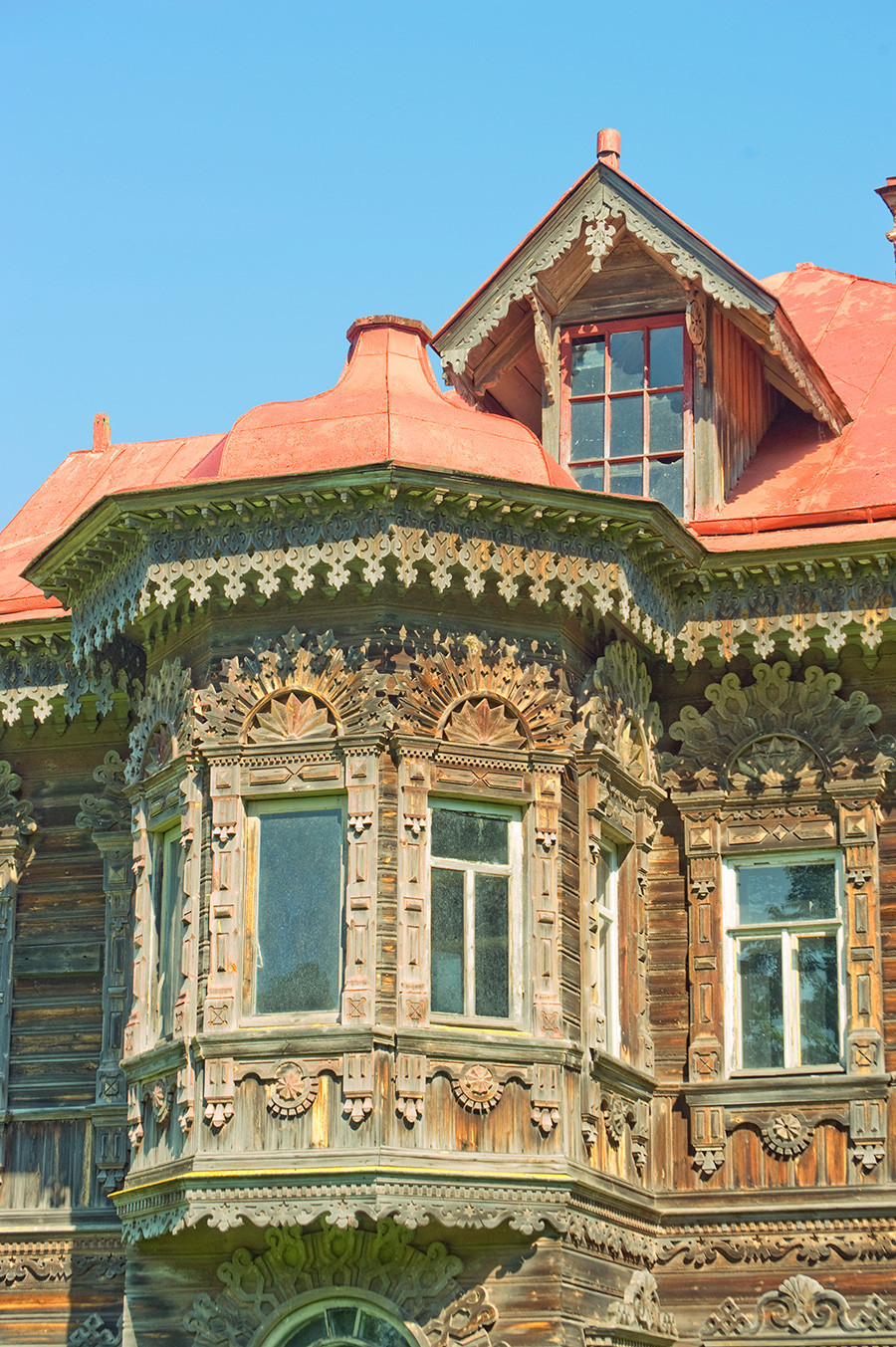 The plan of the Poliashov house represents a combination of neoclassical and modern concepts of the arrangement of interior space — neoclassical in the exterior symmetry and structural balance, modern for the interior with its arrangement of rooms around a central stairway. At the same time the house contains an ample space that corresponds to the attached povet (storage area) of a large northern izba, or log house. 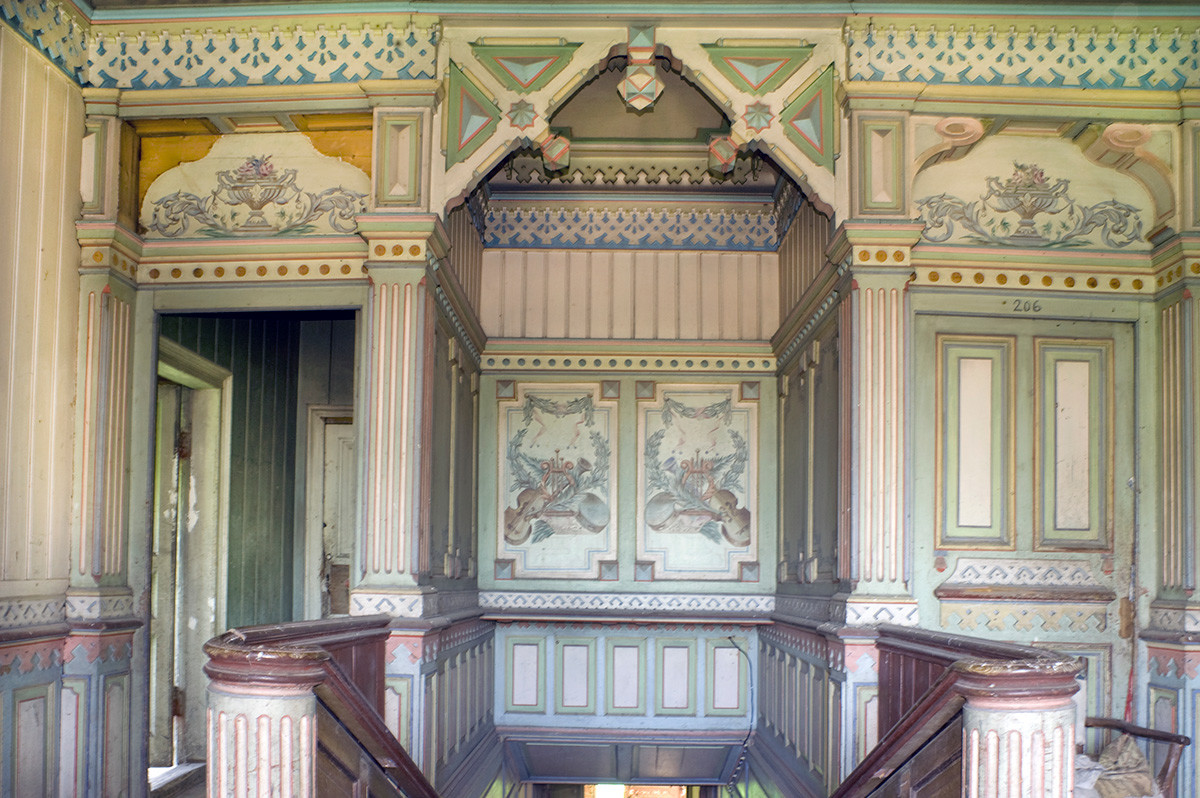 The interior of the house still preserves rooms decorated in an urbane manner that is particularly striking on the upper landing of the main stairway. Massive carved woodwork and the strict geometry of ceiling caissons alternate with graceful wall paintings of floral motifs and arabesques. 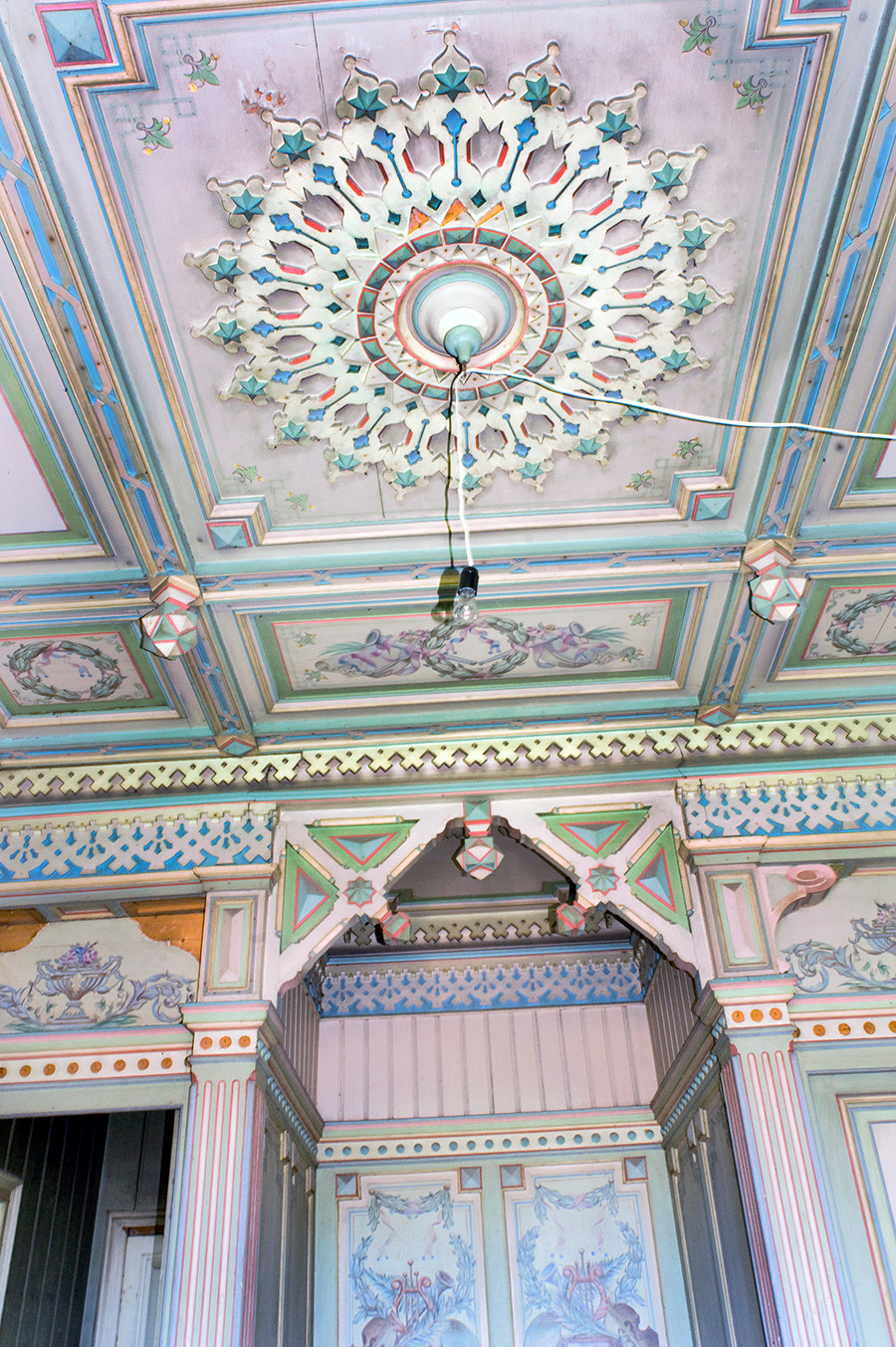 Fragments of patterned wall paintings and stencil designs are also preserved in rooms on the ground floor, including a dining room, kitchen, a spacious pantry and what appears to be a breakfast alcove. (The lower floor could be more easily heated in the long winters.) 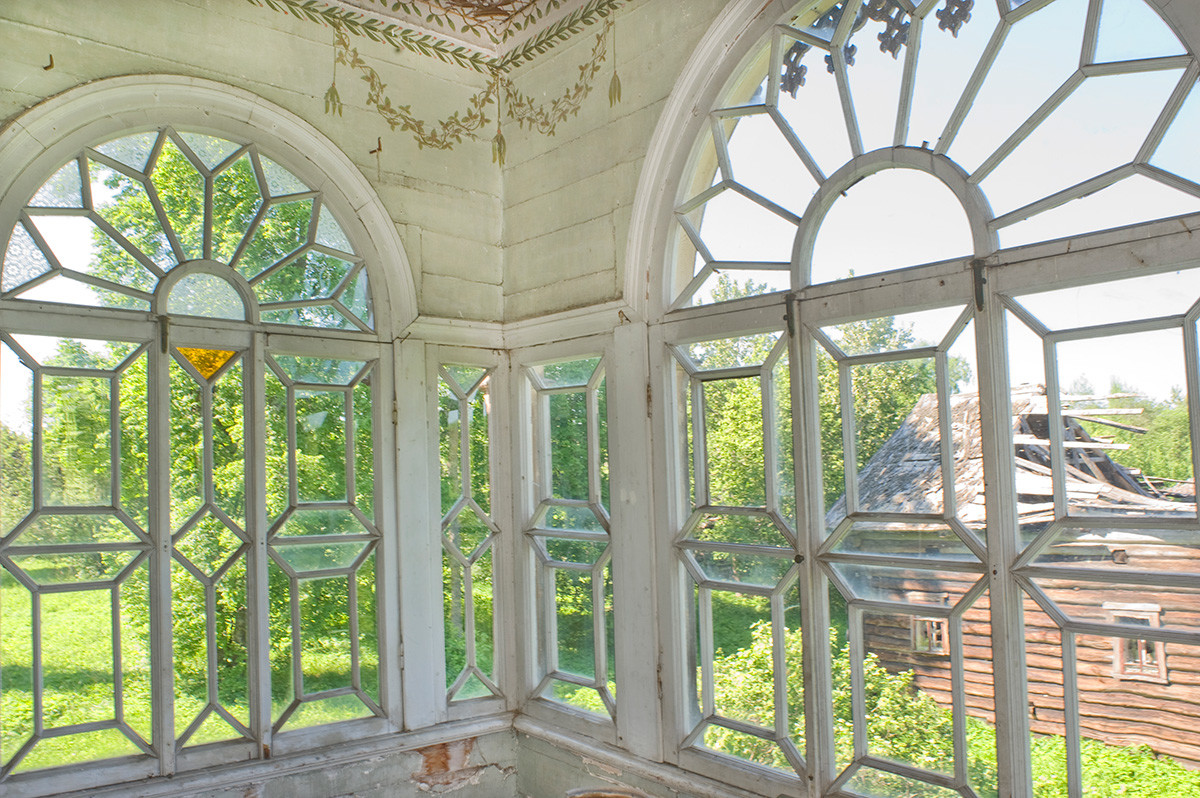 The preservation of much of the interior decoration has depended on proper maintenance - especially of the roof - in order to prevent rapid decay and collapse from moisture seepage. Unfortunately, many country houses were lost to such neglect in the post-war period as villages were depopulated during the demographic shift to cities. 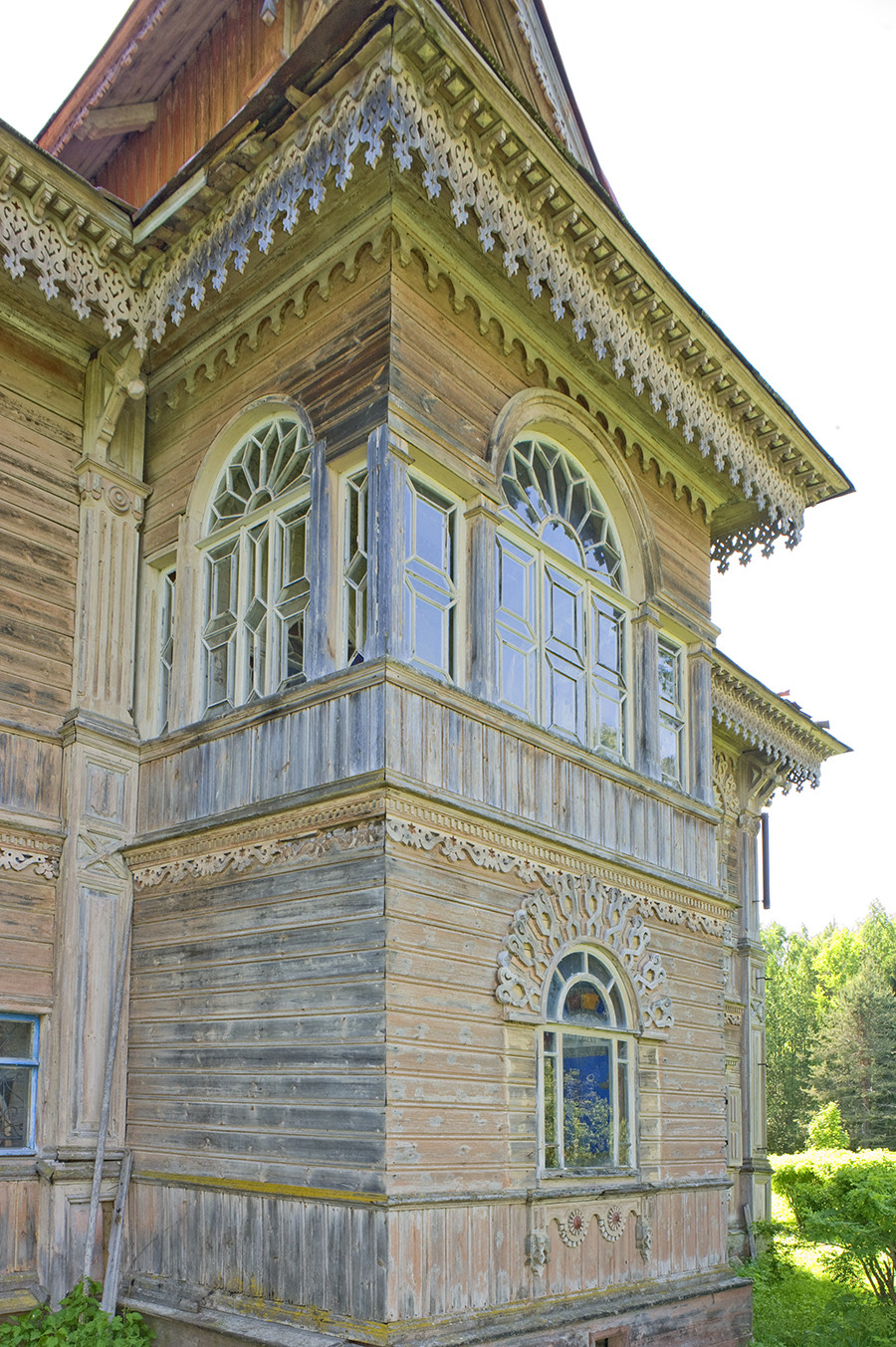 This might have been the fate of the Poliashov house, yet its remarkable appearance appealed to an unlikely savior who played a crucial role in maintaining the structure.  Anatoly Zhigalev, an artist active in the Moscow movement of non-conformist art, was so taken by the house on first sight in 1971 that he decided to settle there in 1972. Over the decades, Zhigalev has lived in the house (winters excepted) and with limited assistance has managed to preserve one of Russia’s most impressive wooden monuments. 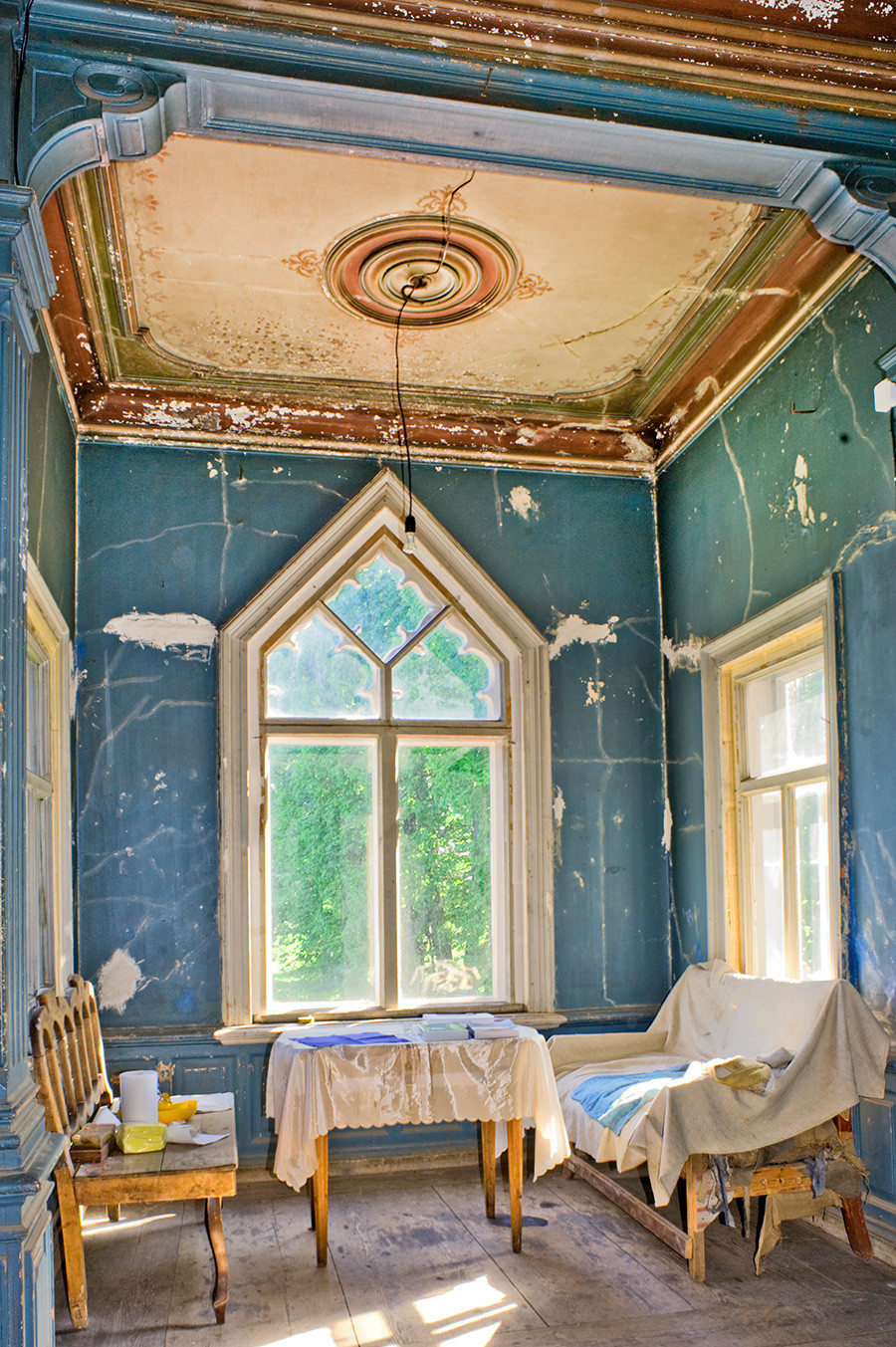 It must be emphasized that this treasure is isolated in a clearing within a densely forested area some distance from a dirt road beyond the small Viga River. Apart from hiking, the best option is the use of an ATV (all-terrain vehicle, or quad). The ride is rough over boggy terrain around the Viga, but the reward is a fantasy vision that only the Russian forest can provide. 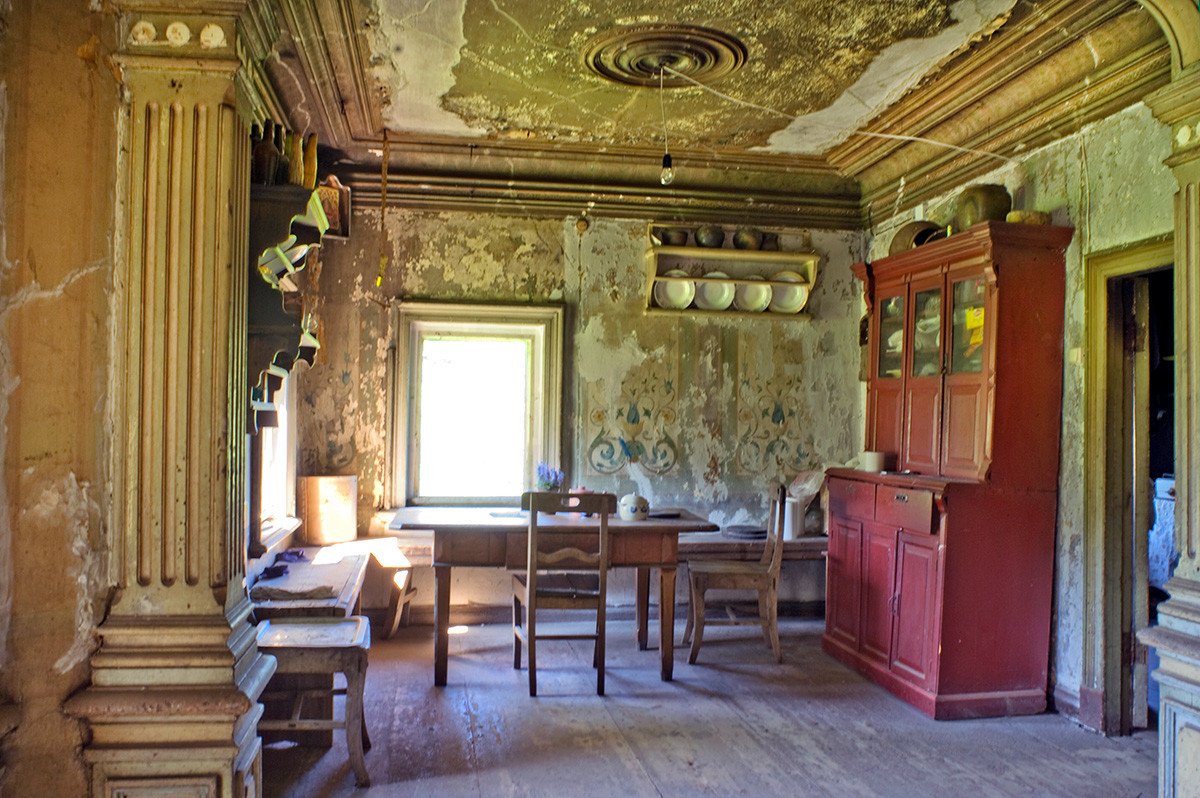