Russia’s wooden windmills get around 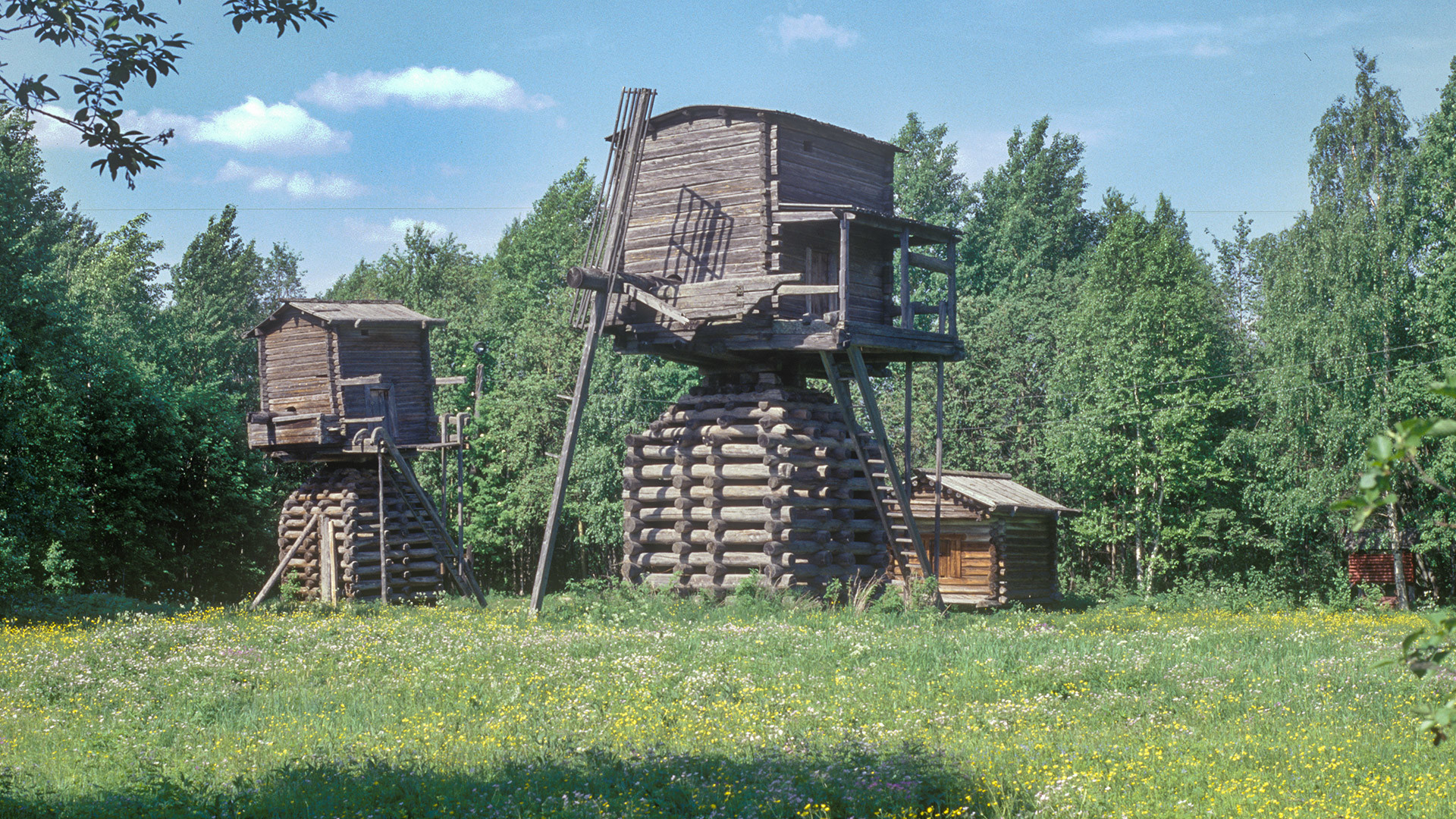 At the beginning of the 20th century, the Russian chemist and photographer Sergey Prokudin-Gorsky developed a complex process for vivid, detailed color photography. His inspired vision of photography as a form of education and enlightenment was demonstrated with special clarity through his photographs of architectural monuments at historic sites throughout the Russian heartland.

Prokudin-Gorsky’s superb architectural record included not only ancient cathedrals and monasteries, but also vernacular wooden structures that included, somewhat surprisingly, windmills. Popularly associated with the Netherlands, windmills were distributed over a vast territory in Europe and in Russia, where a relatively level terrain often made watermills less practical. 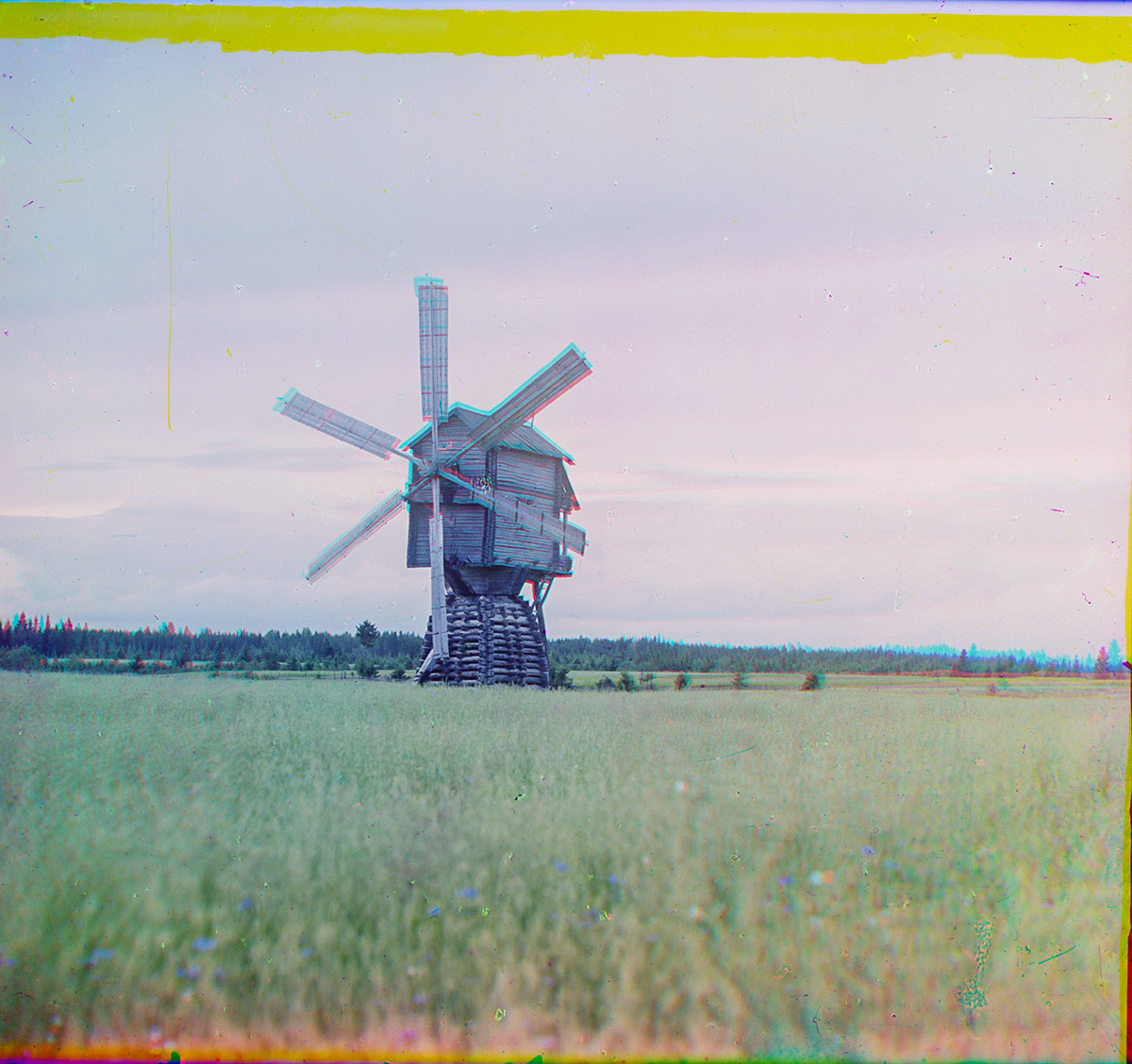 Prokudin-Gorsky photographed one of the earliest types of windmills in two very different locations: near Cherepovets in Vologda Province in northwest Russia, and at Yalutorovsk in Tyumen Province in western Siberia. Although the ones he saw have not survived, I found windmills that were very similar during my work in the far north near the Arctic Circle.

From technical views to bucolic scenes 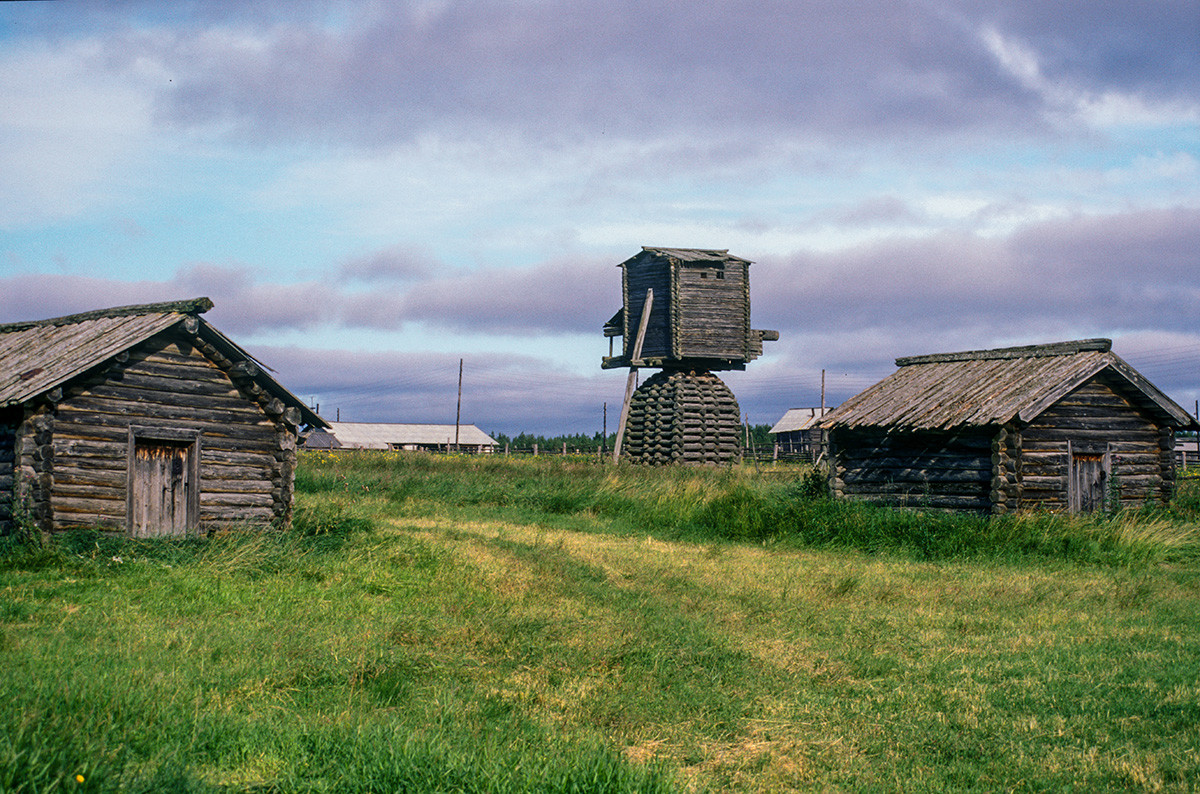 By 1903, Prokudin-Gorsky had already achieved miracles traveling with a bulky box camera and heavy glass plates that required processing soon after exposure. Yet getting to the distant sites envisioned in his grand project would need additional assistance. After a demonstration of a selection of his color slides to Tsar Nicholas II in May 1909, he was granted official approval to pursue his project with state support.

In practical terms, the biggest contribution came from the Ministry of Transportation, which provided crucial logistical support for his arduous journeys. In return, the Ministry commissioned him to photograph improvements within a rapidly expanding canal and rail network. 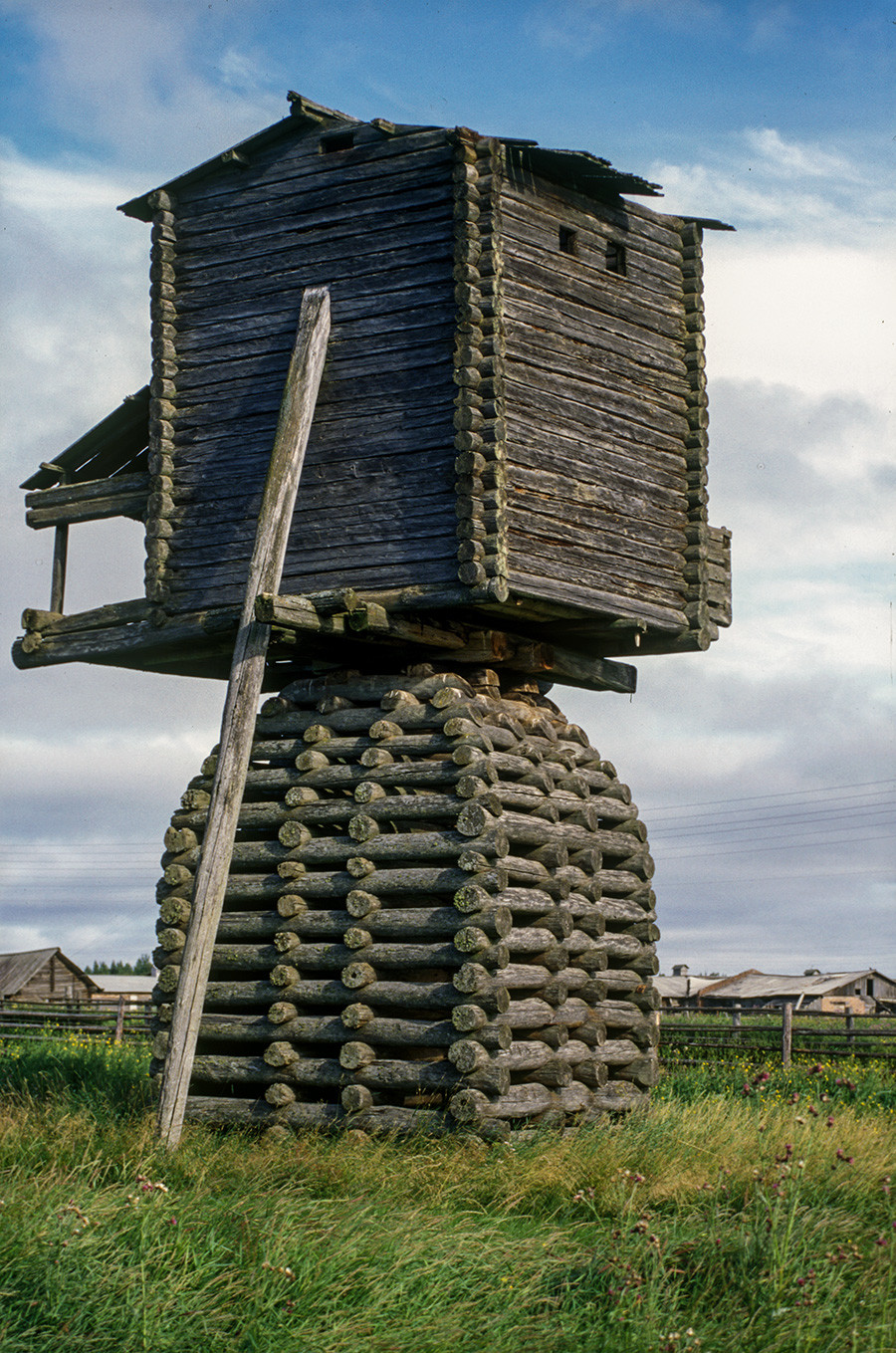 In June and July 1909, Prokudin-Gorsky traveled along the Mariinsky Waterway in northwestern Russia. This water route was linked to the development of St. Petersburg, founded in 1703 and designated the capital of Russia in 1712. The Mariinsky Waterway system extended from the Neva River at St. Petersburg through Lakes Ladoga and Onega to White Lake, which is drained by the Sheksna River merging with the Volga River at Rybinsk. 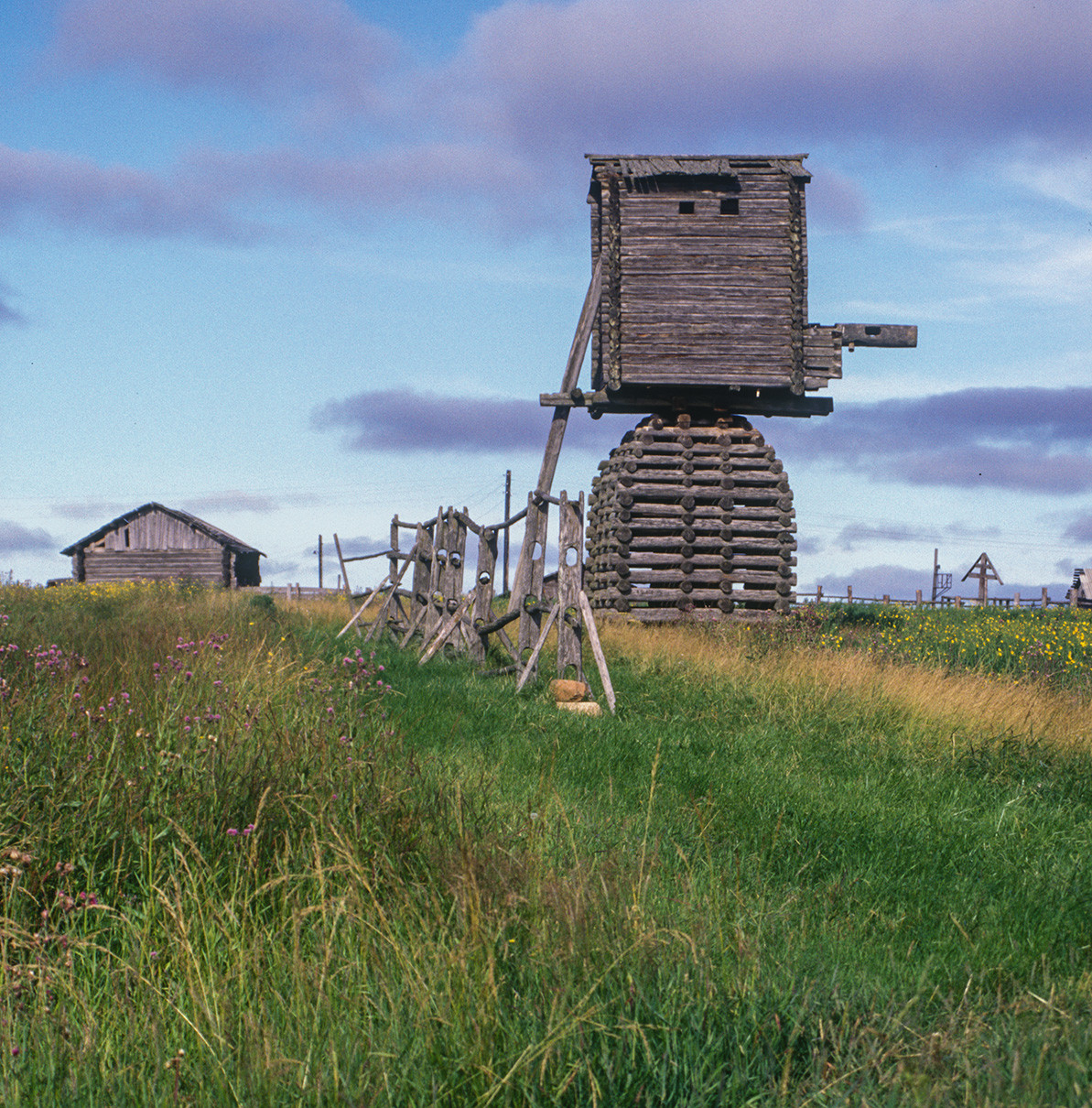 Prokudin-Gorsky’s extensive photography along the Sheksna included technical views of dredging operations and hydraulic installations, but he also photographed bucolic scenes with peasants during summer harvest when time seemed to have stopped. These views include fields of rye near what was the village of Leushino, the location of one of the largest convents in Russia.

A different kind of windmill 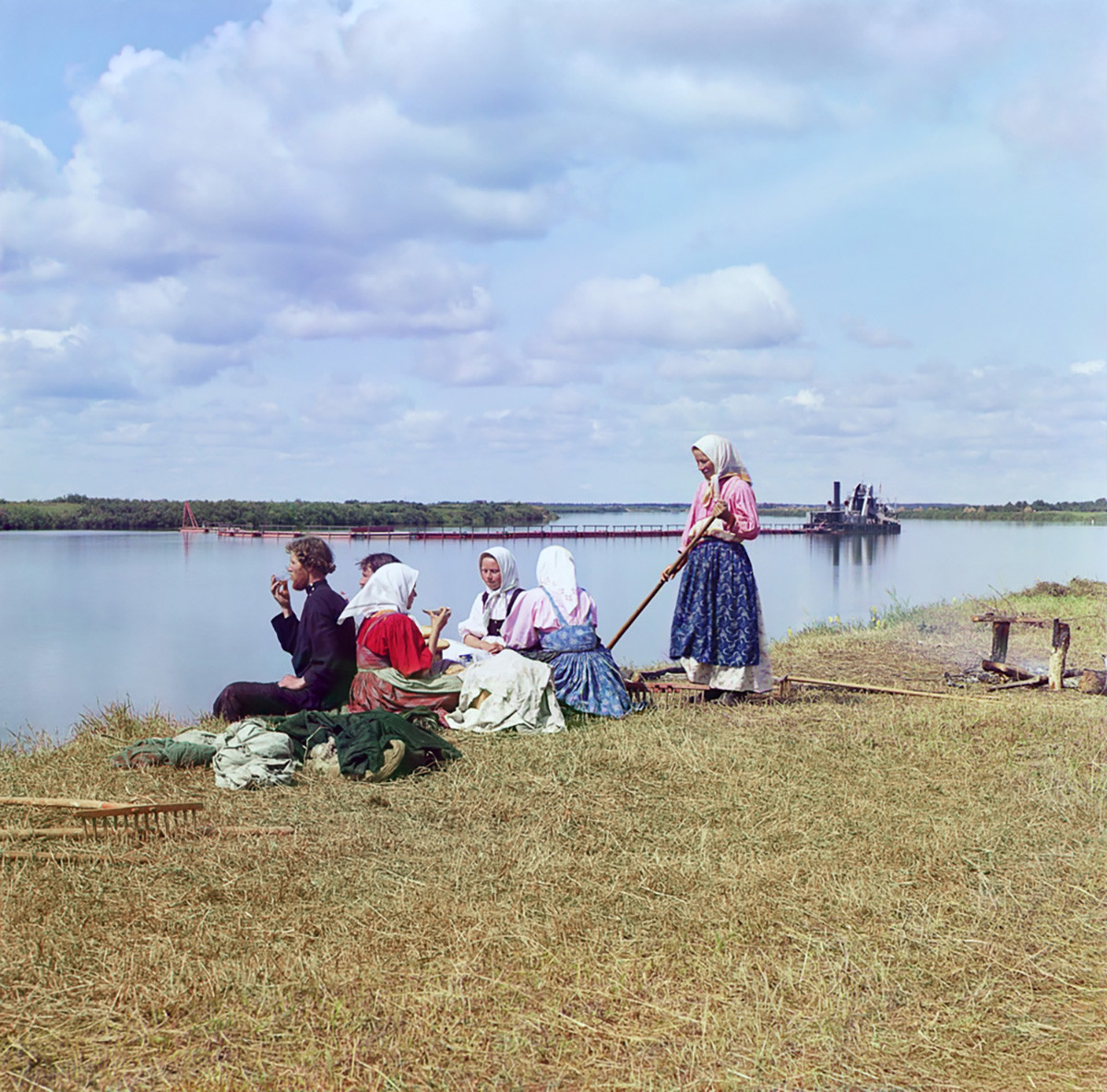 In the middle of the rye field, Prokudin-Gorsky photographed two contraptions that resemble windmills. Indeed, they are a type of post mill (stolbovka in Russian), the earliest known form of vertical windmill.

Vertical windmills are considered to have originated in northwest Europe during the 12th century, where they were used to mill grain. By the 15th century (if not earlier) they had appeared in grain-growing areas of Russia. 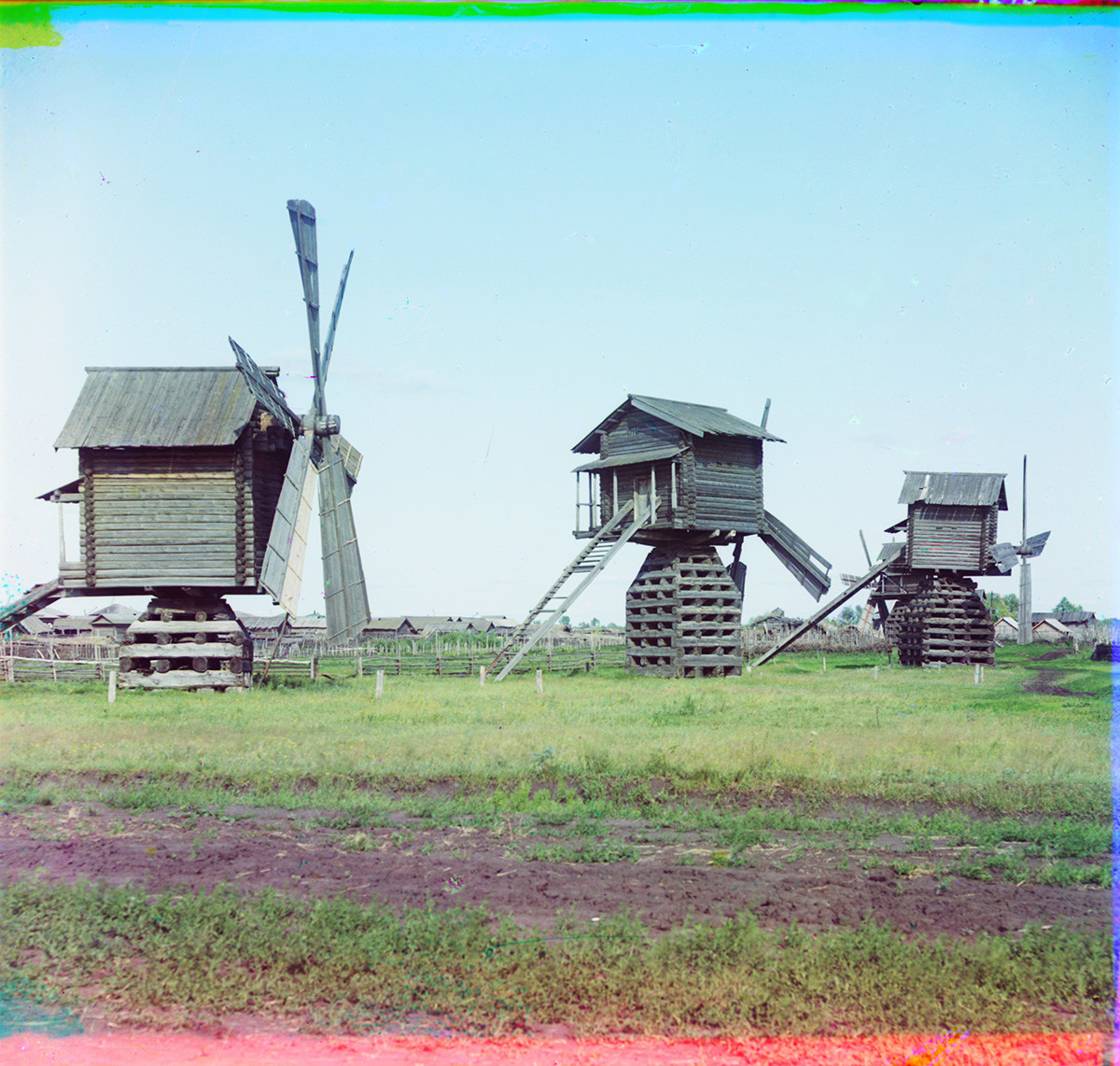 In its basic form, the upper part of the structure with the milling apparatus was elevated on a high log base, or “crib”. This upper part could be turned around a central post (hence the name) to catch prevailing winds that drove the blades and produced torque for the mill stones. The position of the upper structure was stabilized by attached beams that angled to the ground.

The small size of the upper structure could accommodate the grinding machinery but little else. The milled grain was taken down a suspended stairway and stored in a nearby barn. 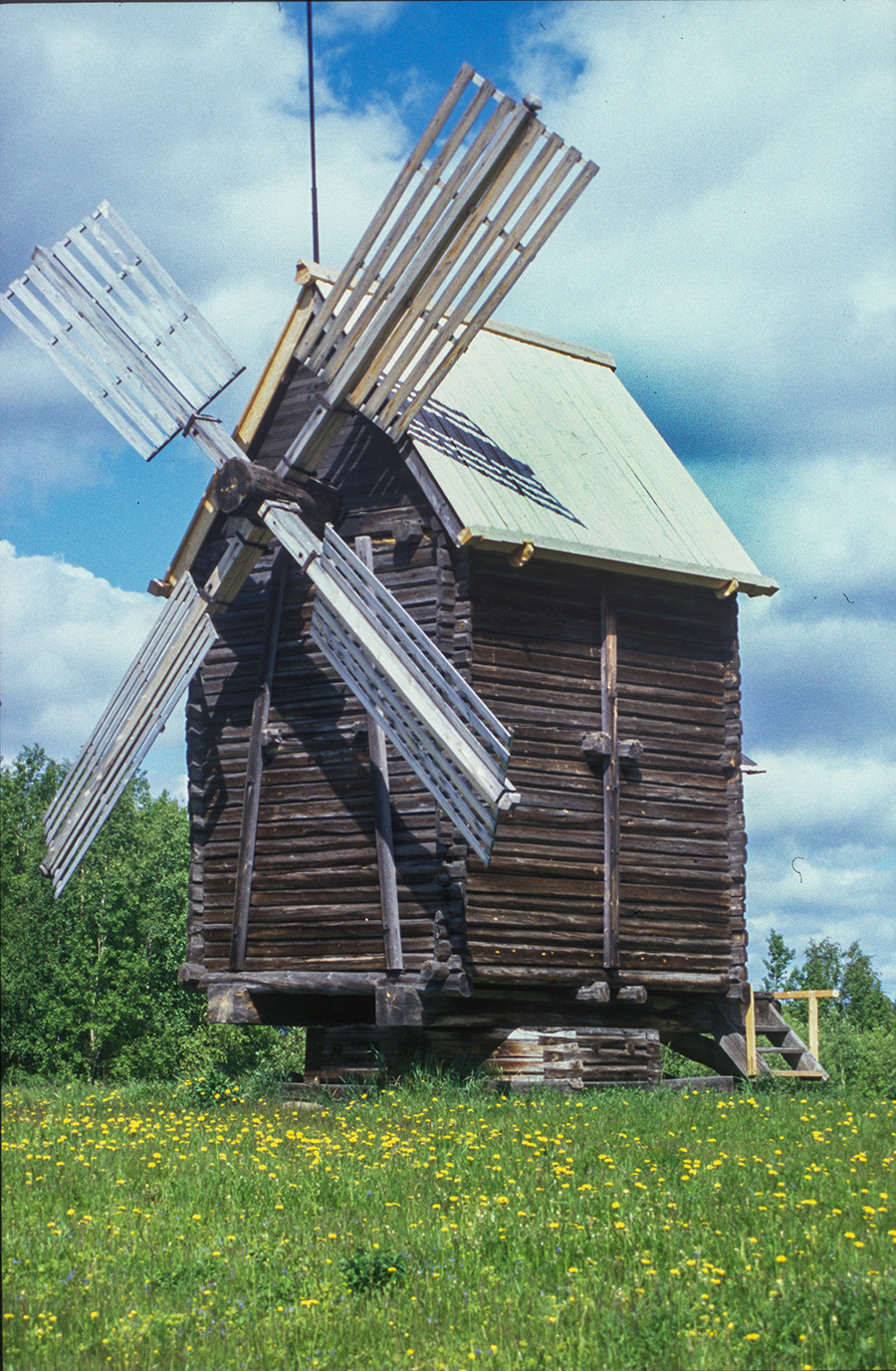 By 1964, Leushino and the surrounding area—including the John the Baptist Convent—were submerged by the filling of the Sheksna Reservoir, created for navigation and hydroelectric power as part of the enormous Volga-Baltic Waterway. If they had not already collapsed, the windmills that Prokudin-Gorsky photographed were swept away.

To my amazement, however, I came upon similar post windmills while photographing in the winter and summer of 2000 at the northern village of Kimzha near the Mezen River and the Arctic Circle. Even this far north, it was possible to grow hardy winter grains. 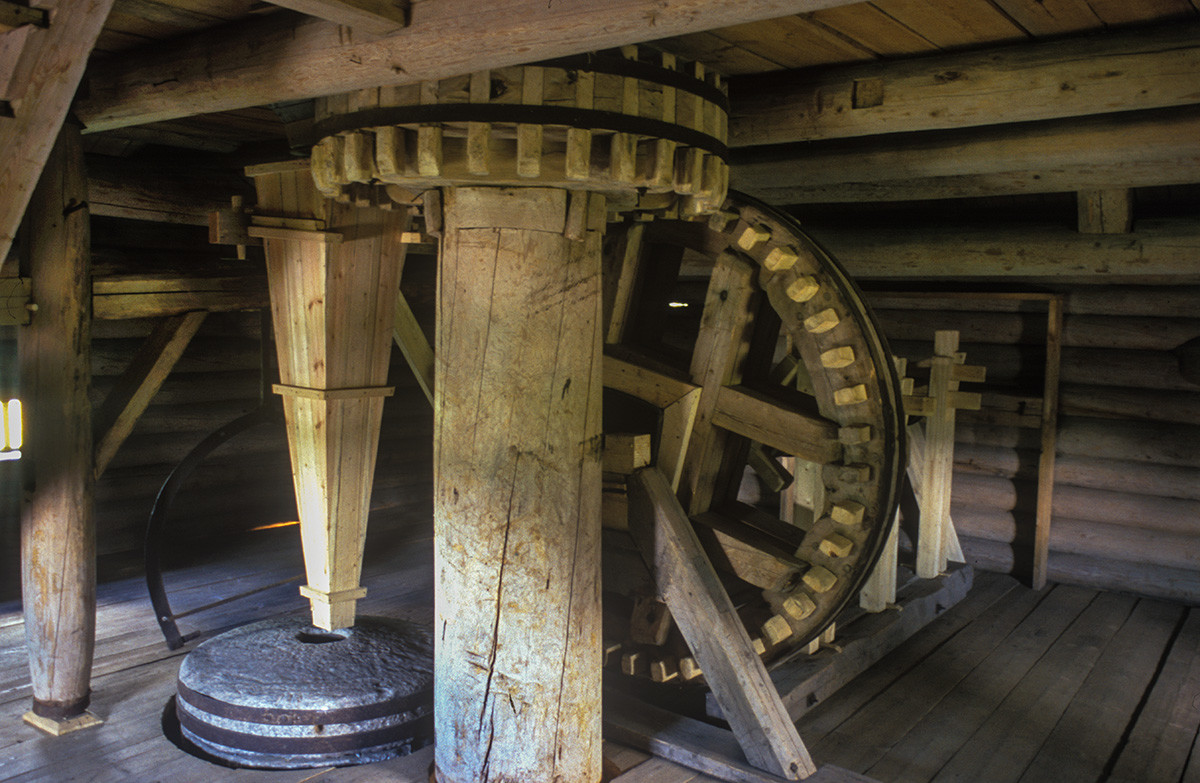 The structure of one of the Kimzha mills was largely preserved, although lacking the blades. In one view, the horizontal shaft that connected the blades with the milling apparatus is visible. The upper structure of a second mill had lost its top half. (These mills have recently been partially restored.)

A discovery in Siberia 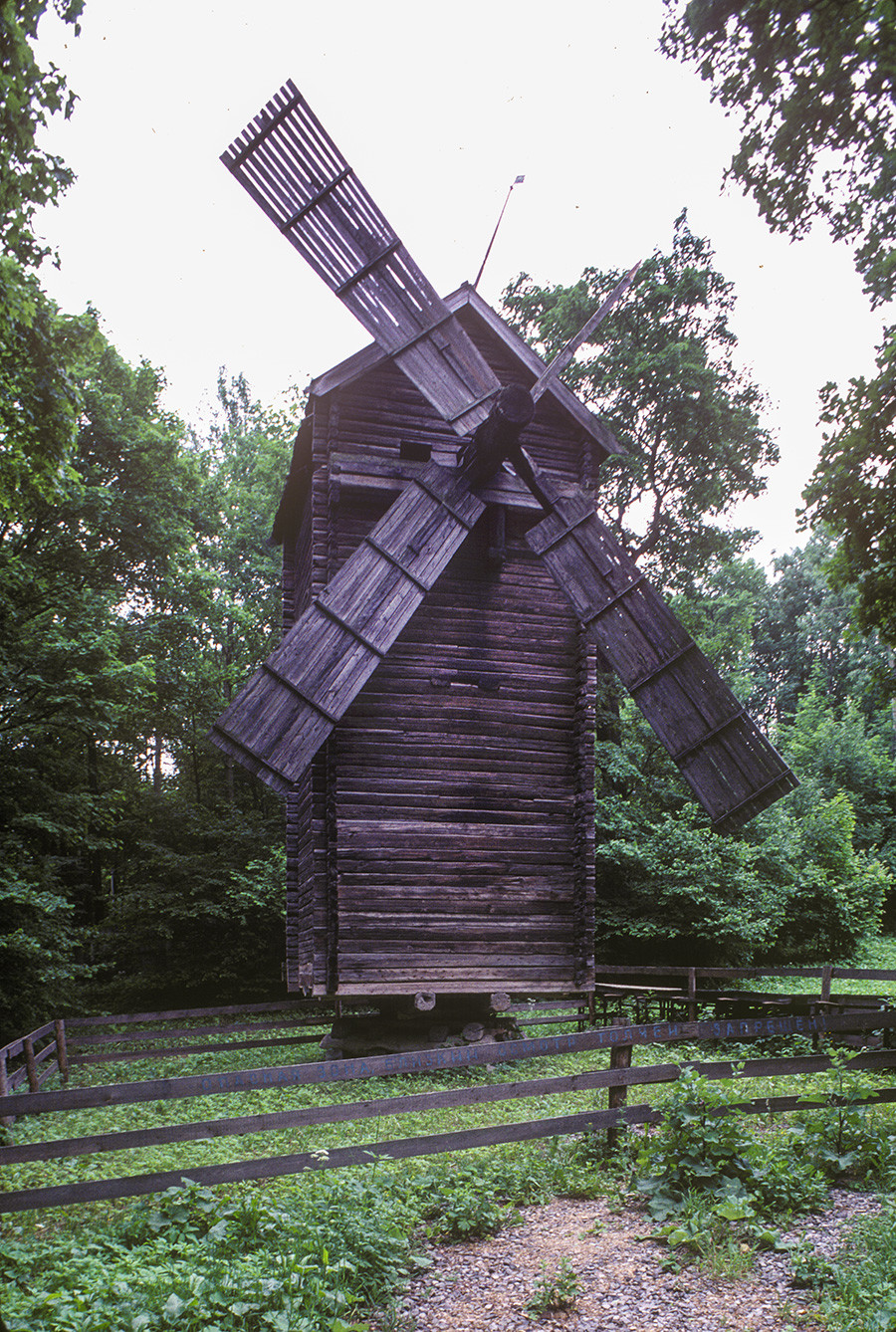 Remarkably, Prokudin-Gorsky found a better-preserved cluster of post windmills during a June 1912 campaign into western Siberia as part of a commission to document the Kama-Tobolsk Waterway, a link between the European and Asian sides of the Ural Mountains. His main objectives were the towns of Tyumen and Tobolsk on the Irtysh River.

He also worked in the area around the town of Yalutorovsk, where a major railroad bridge crossed the Tobol River (part of a new mainline constructed in 1912 to increase efficiency on the Trans-Siberian Railway.) In the nearby countryside, he photographed a group of four post mills — one of which had six blades. 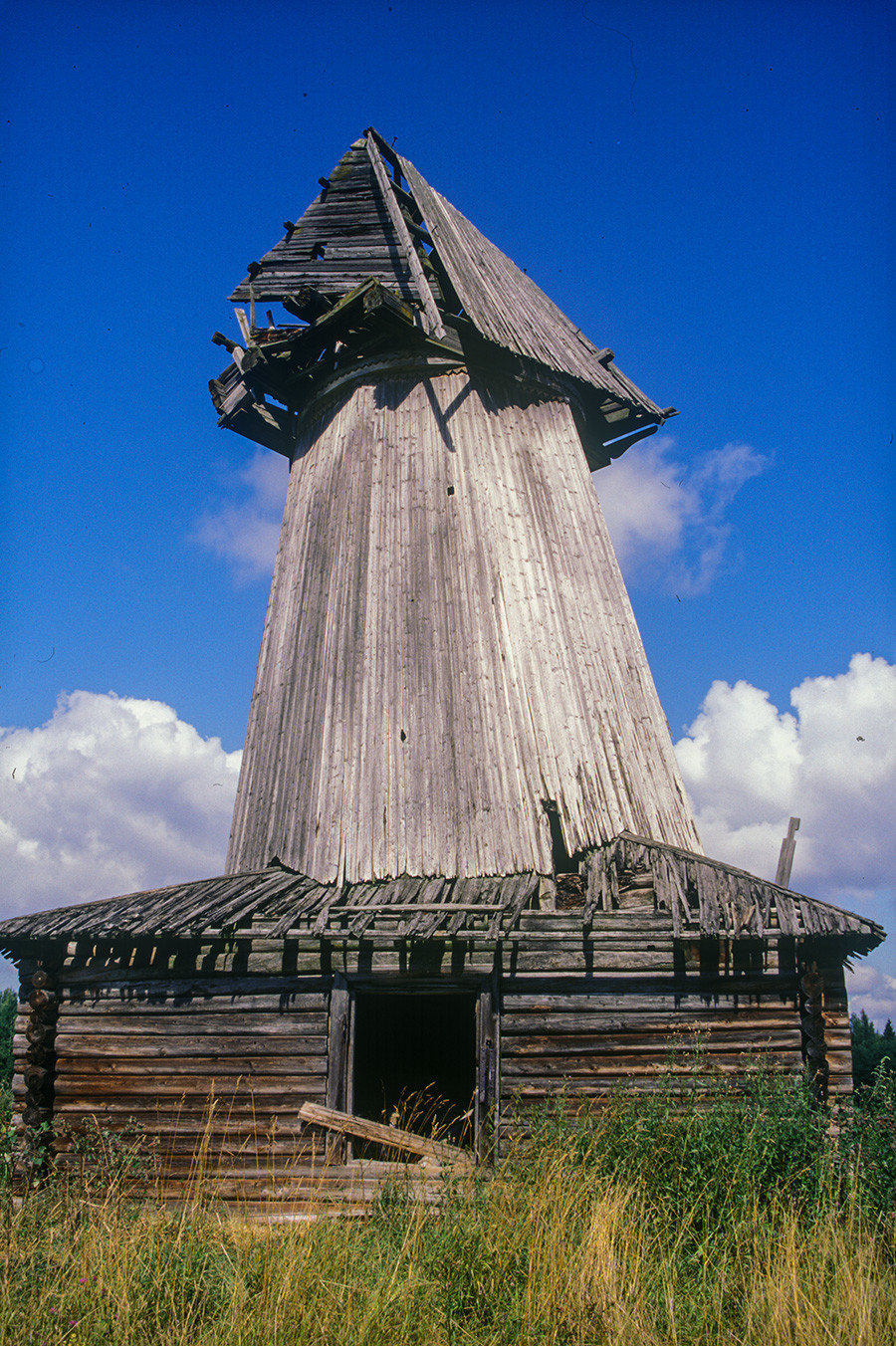 For all his obvious fascination with the post mill, Prokudin-Gorsky apparently did not photograph other types of windmills that were also prevalent in Russia. In my fieldwork, I have seen several examples, some in outdoor museums, others in their original location. 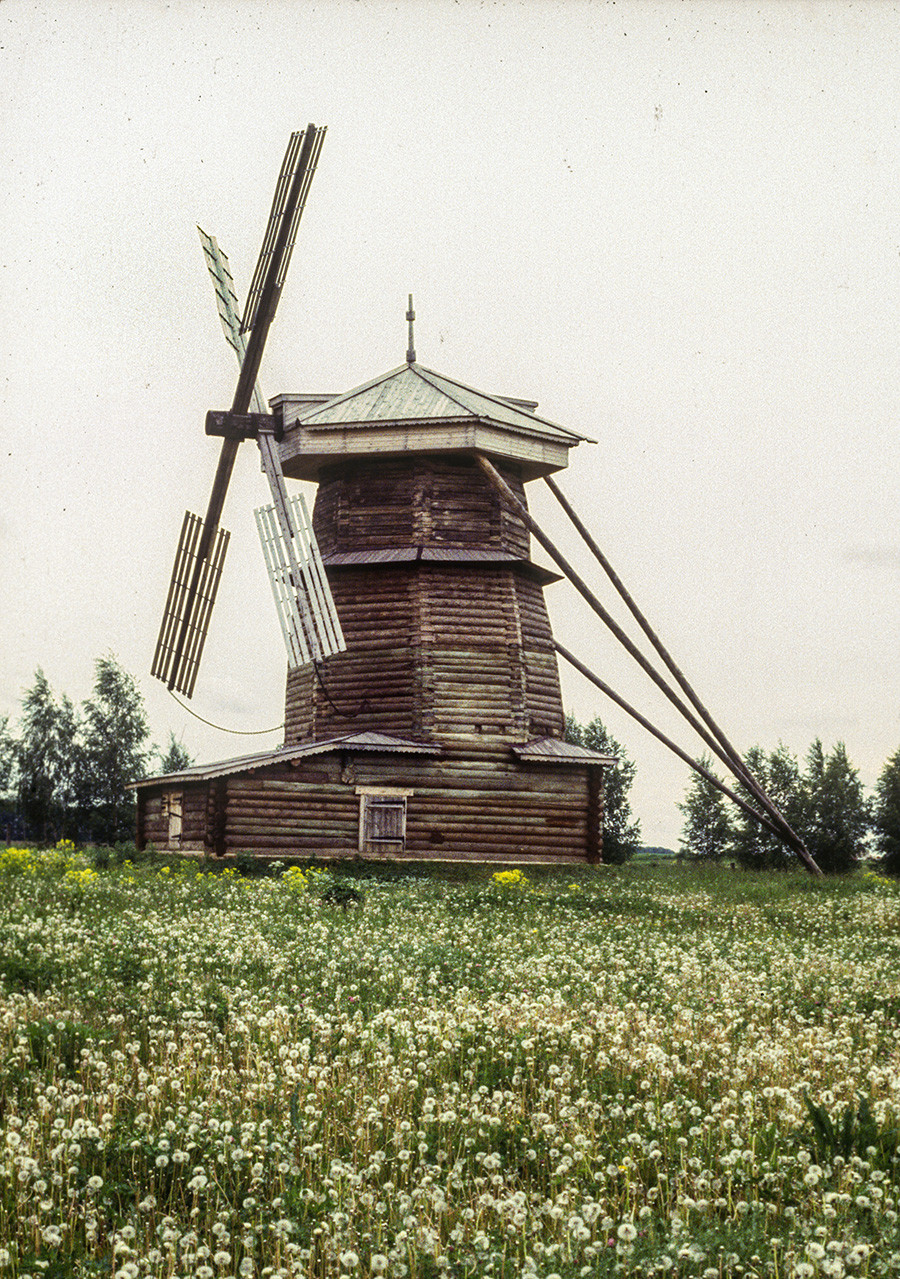 The largest such outdoor museum — Malye Korely, near Arkhangelsk — displays a variation of a post mill in which the turning structure rests on a low frame rather than a high crib. The milling apparatus is relatively well preserved on the interior of this example, from the village of Kalgachikha.

More advanced development of the windmill was the tower mill in which the movable cap, which contains a horizontal shaft supporting the blades, rests above an enclosed tower. In Europe, there are numerous variations on this type, which can be used for pumping as well as milling. 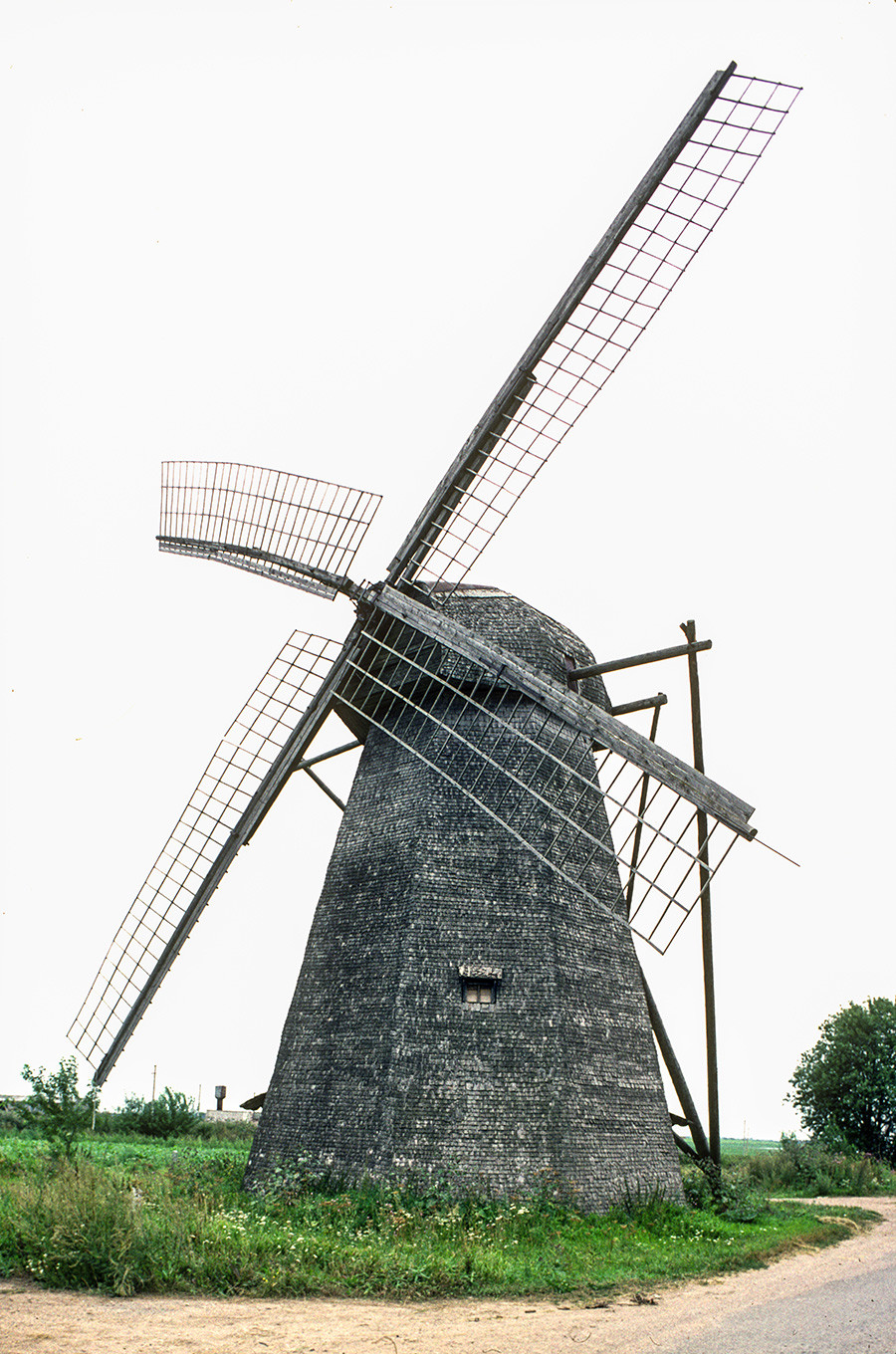 In Russia, I have photographed tower mills that conform to a type known as the “apron” or “smock” windmill, in which the main part — often octagonal — flares downward in a wood-frame structure covered with boards or shingles (the “apron”). The outdoor museum of wooden architecture in Suzdal (one of the first such museums in Russia) has a well restored example from Moshok village. I also found a rare example, albeit in a derelict state, at the abandoned village of Zakharyevo in northern Yaroslavl Province on the road to Rybinsk.

Among my favorites are two tower mills in the vicinity of Novgorod. The first, clad in aspen shingles and fantastic in appearance, still stood with its blades on the original site near the Trinity-St. Mikhail-Klopsky Monastery. I recorded it from all sides. 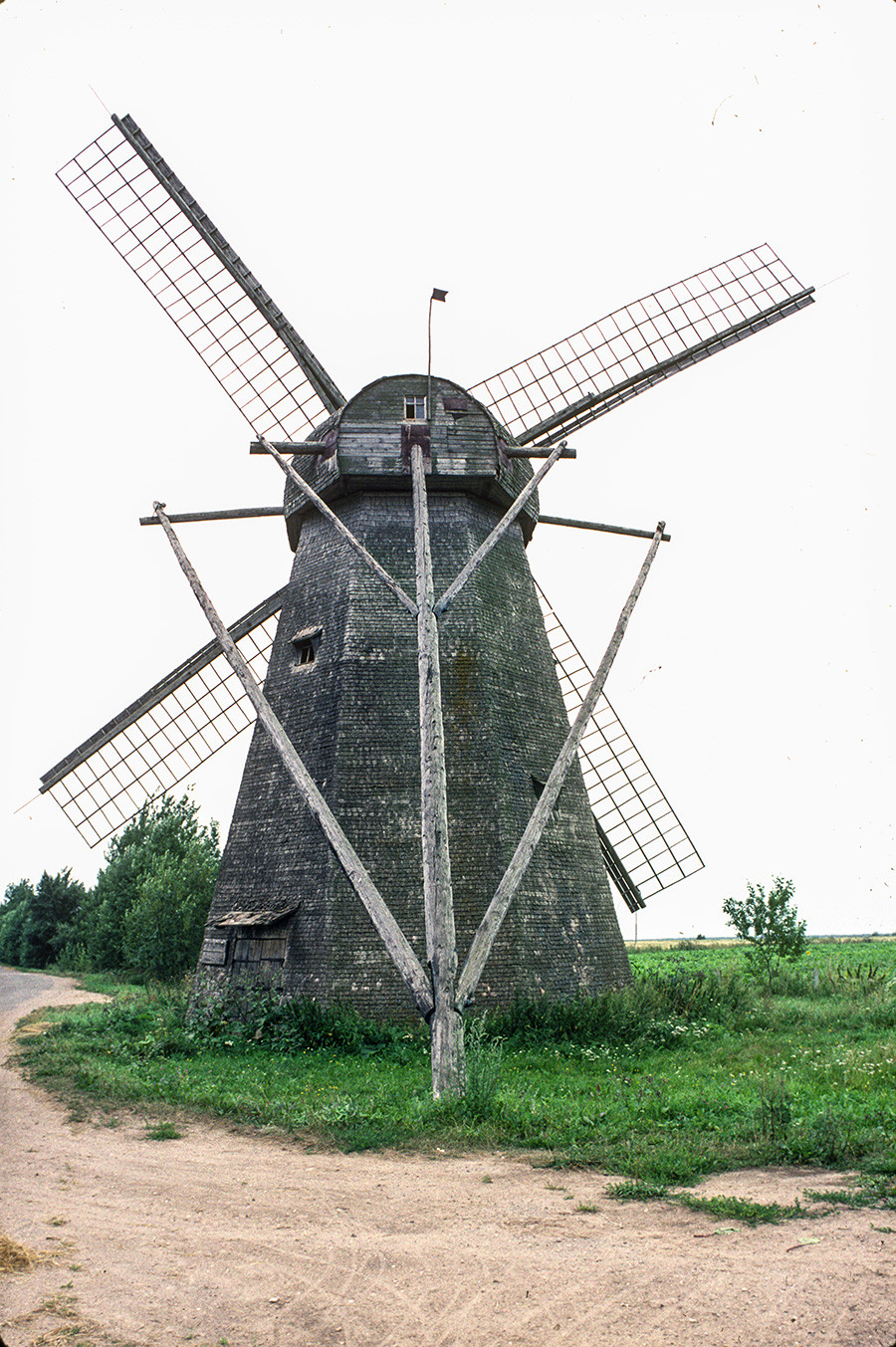 The second mill, originally erected in the village of Ladoshchina in the 1920s, had just been restored at Novgorod’s Vitoslavlitsy museum of wooden architecture when I photographed it in October 1971. The lighter color of the replaced parts (such as aspen shingles) indicates the newness of the restoration. (As of 2018, the mill is undergoing a capital restoration that includes the machinery.)

I am so proud of that windmill photograph taken 50 years ago with a small Konica camera. Having no idea of my vast photographic project that would unfold over the years, I was just there, in a muddy field, framing the object and catching the faint sunlight at the end of a stormy autumn day. 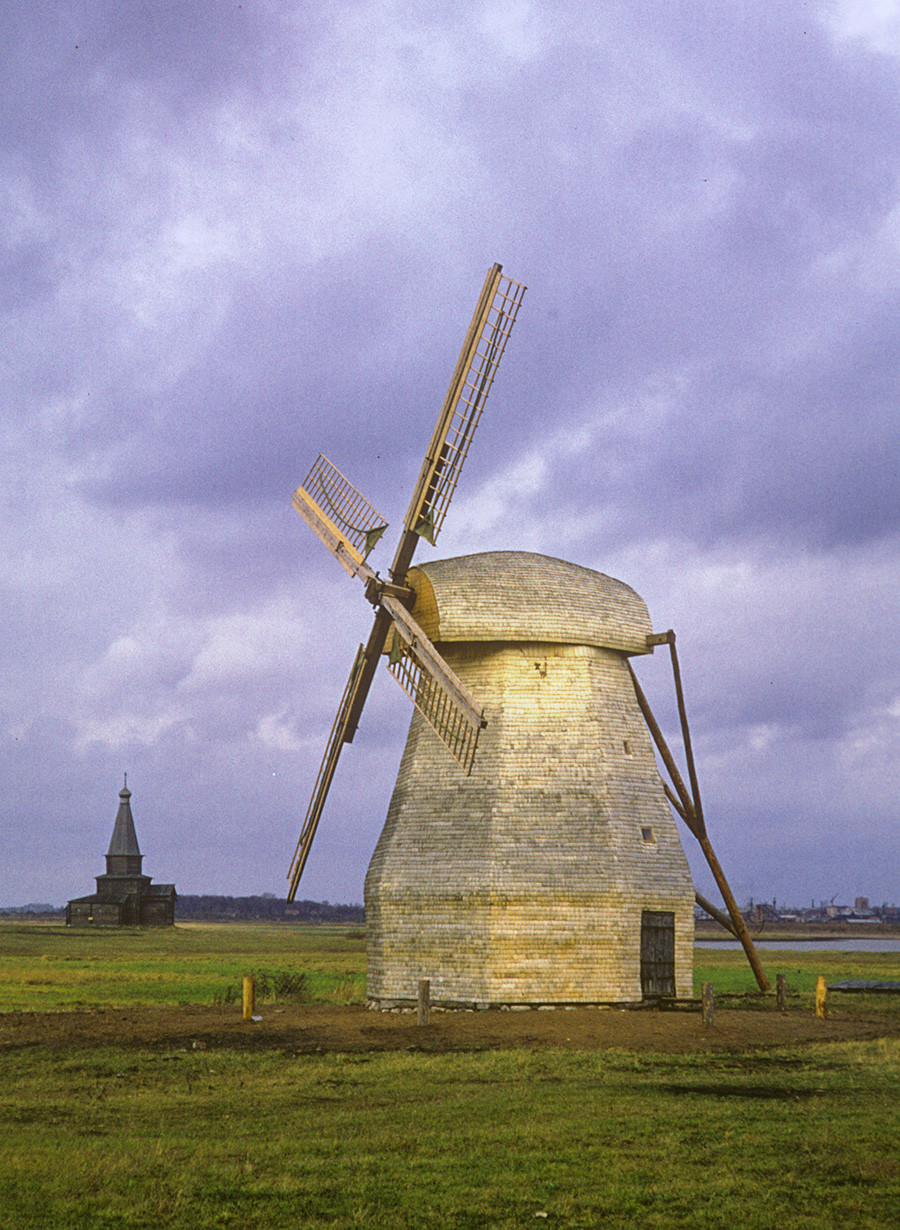 In the early 20th century, the Russian photographer Sergey Prokudin-Gorsky devised a complex process for color photography. Between 1903 and 1916 he traveled through the Russian Empire and took over 2,000 photographs with the process, which involved three exposures on a glass plate. In August 1918, he left Russia and ultimately resettled in France where he was reunited with a large part of his collection of glass negatives, as well as 13 albums of contact prints. After his death in Paris in 1944, his heirs sold the collection to the Library of Congress. In the early 21st century the Library digitized the Prokudin-Gorsky Collection and made it freely available to the global public. A few Russian websites now have versions of the collection. In 1986 the architectural historian and photographer William Brumfield organized the first exhibit of Prokudin-Gorsky photographs at the Library of Congress. Over a period of work in Russia beginning in 1970, Brumfield has photographed most of the sites visited by Prokudin-Gorsky. This series of articles juxtaposes Prokudin-Gorsky’s views of architectural monuments with photographs taken by Brumfield decades later.