Before and after: St. Petersburg in the 20th century and now (PHOTOS) 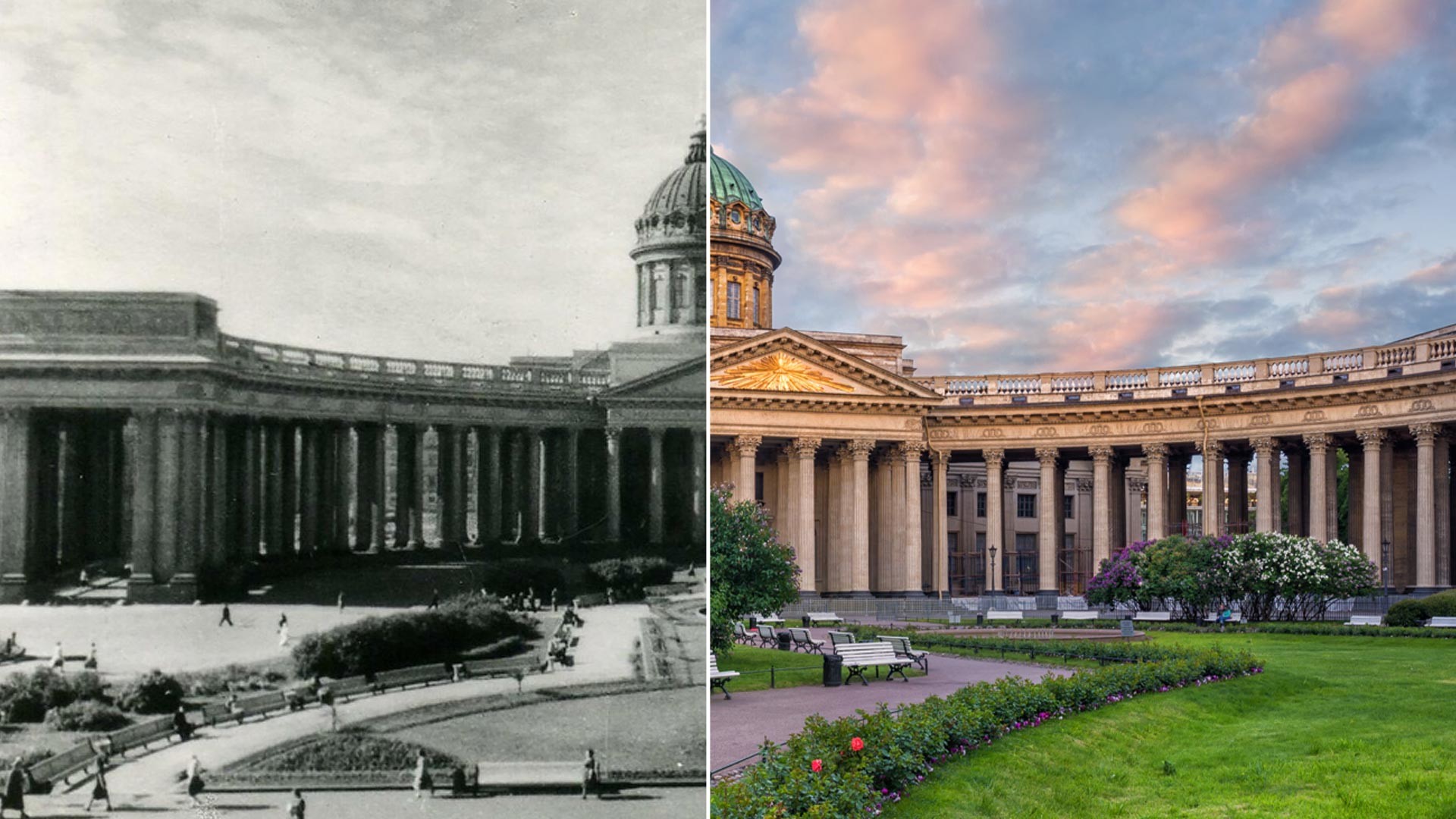 A. Skorospekhov/A.N.Odinokov archive/russiainphoto.ru; Legion Media
Over the past century, even the name of Russia’s northern capital has changed several times. Let's compare what the city sights looked like then and now.

1. Church of the Savior on Spilled Blood 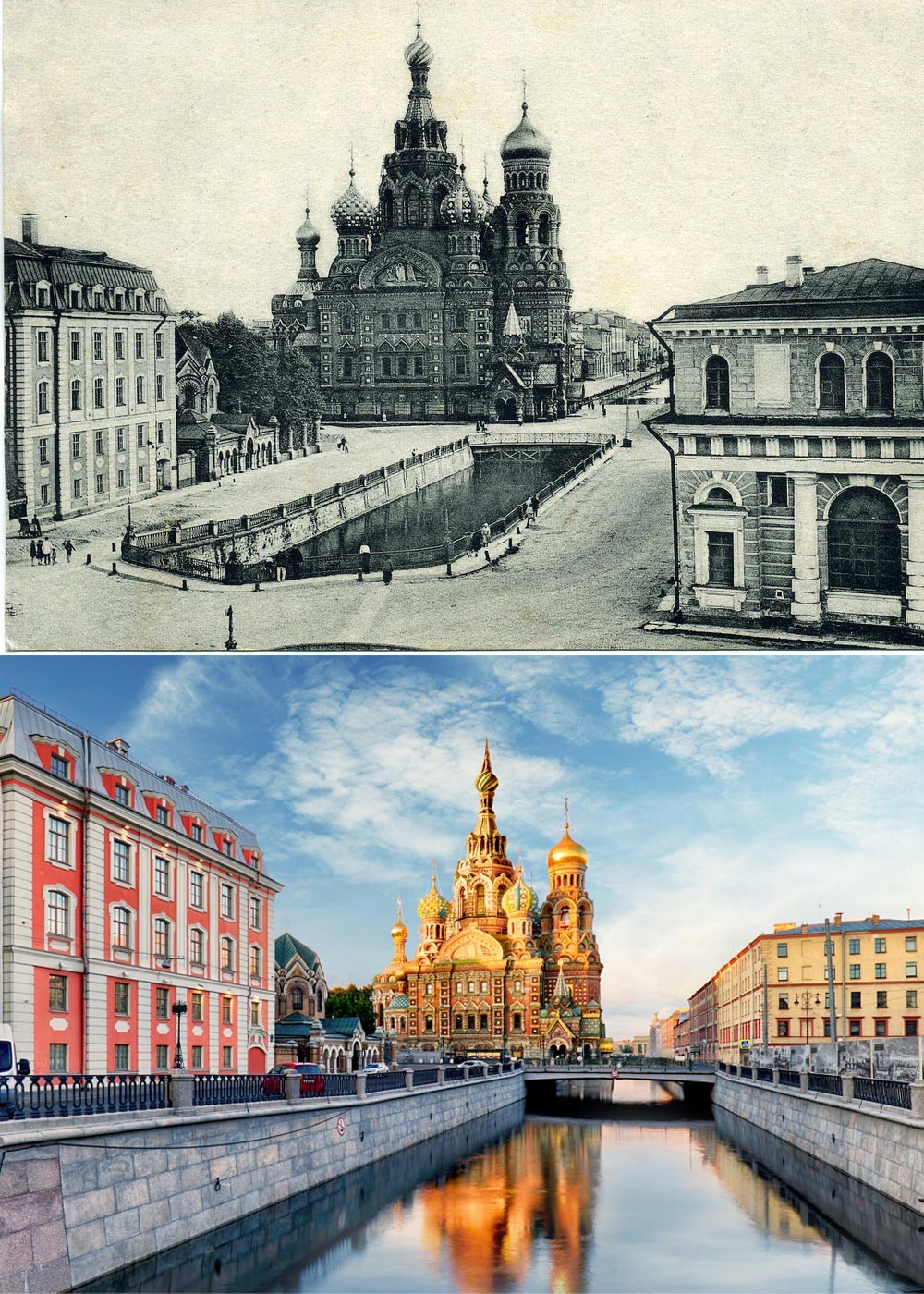 In the early 19th century, this place looked completely different. To build the church at the site of the assassination of Emperor Alexander II, the embankment of Griboyedov (then Ekaterinsky) Canal was specially fortified, narrowing the canal. 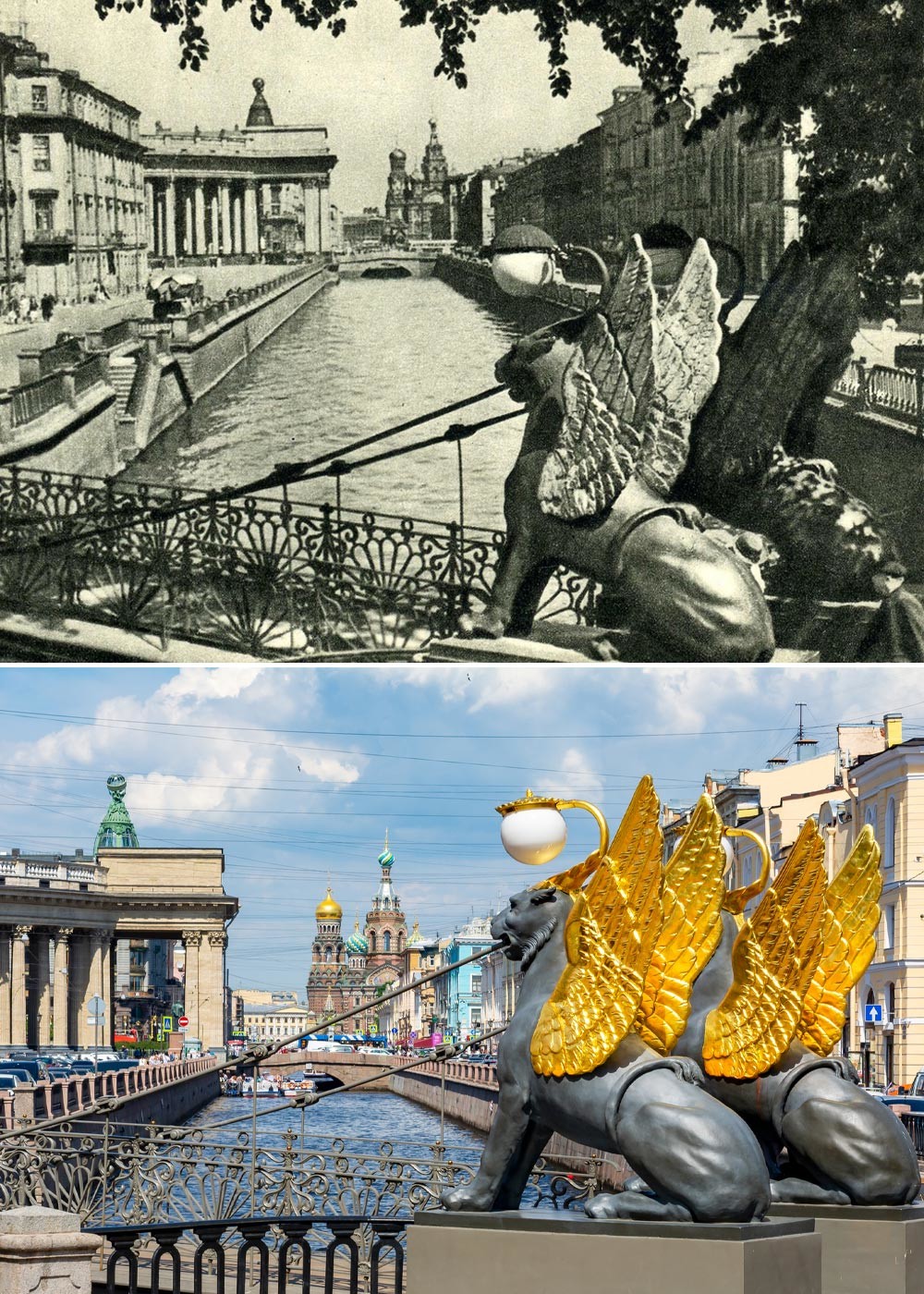 Here’s the view from the other side of the canal — from Bank Bridge with the famous winged lions, which today are as good as new, having been restored just a few years ago. In the distance you can see that same Church of the Savior on Spilled Blood, and a little closer on the left, the colonnade of Kazan Cathedral. 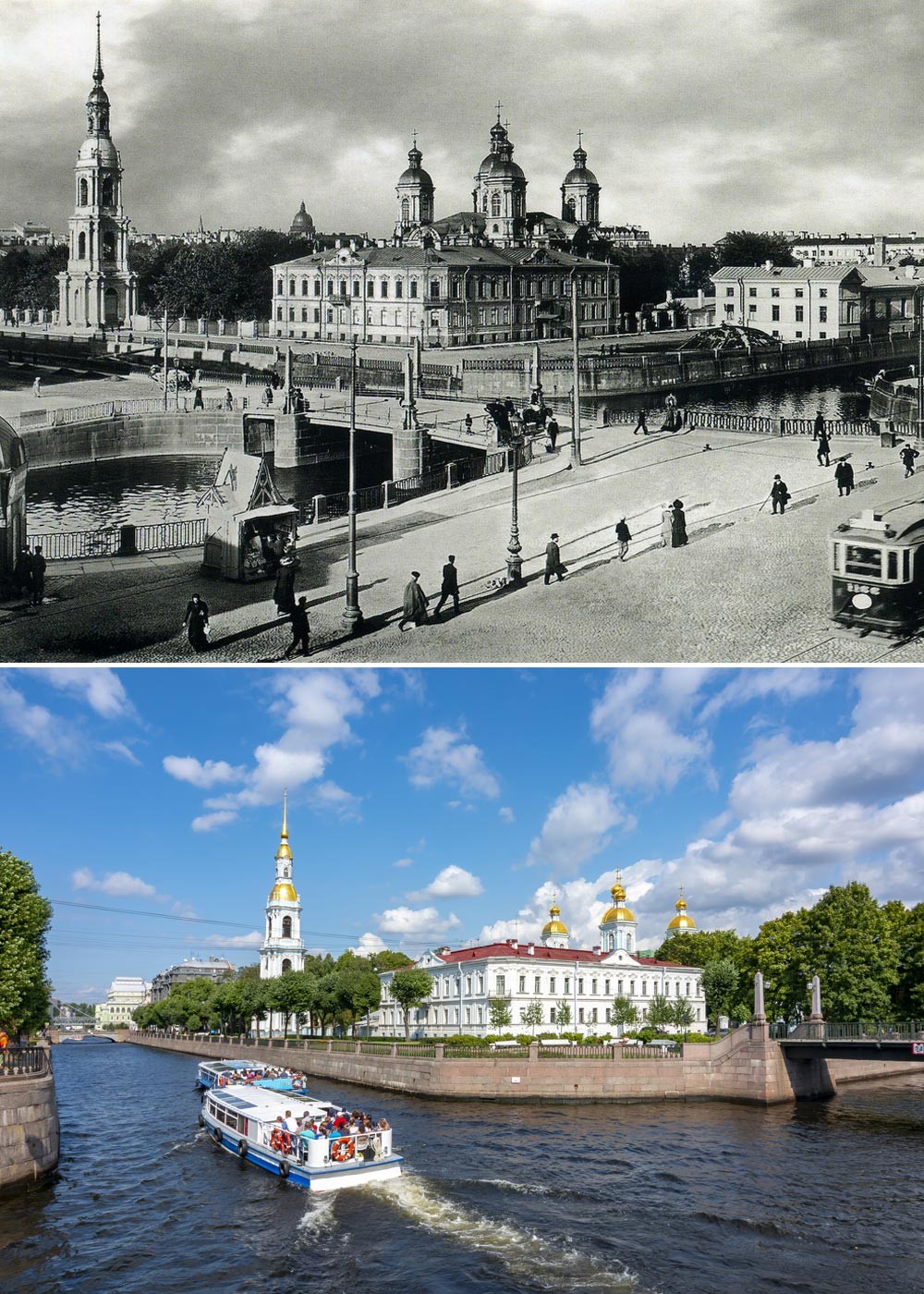 At the intersection of the Griboyedov and Kryukov canals stands a baroque masterpiece: Nikolsky Cathedral and its bell tower. From this angle it is obscured by an apartment building. Today it is a popular tourist destination because the canal intersection offers a view of no fewer than seven bridges. Not all are visible in the photo. What’s more, in the “before” photo there is no pedestrian bridge leading from the apartment building across Griboyedov Canal — that was built only in 1957. 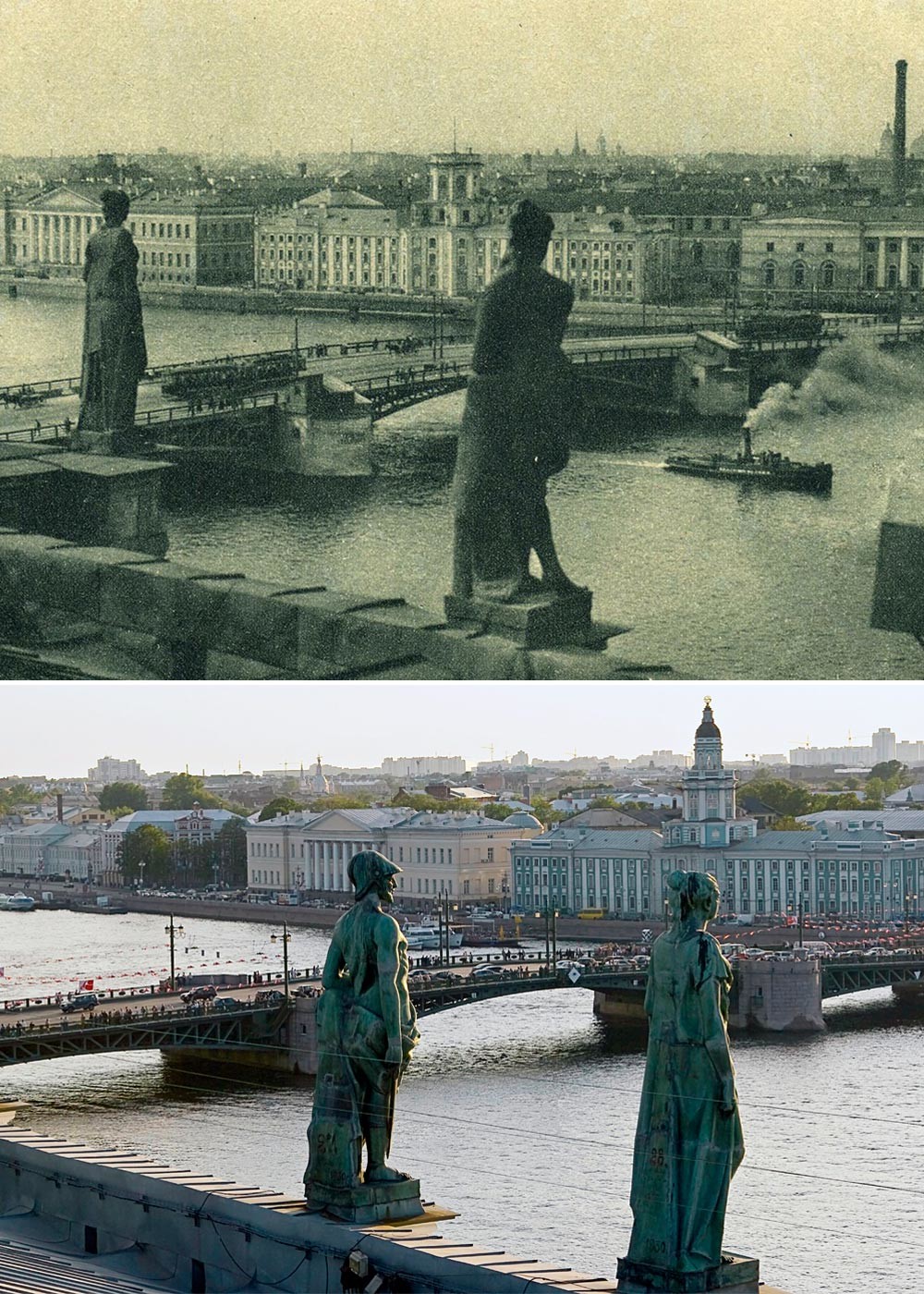 This double-winged drawbridge is one of the symbols of St. Petersburg. It leads from the Winter Palace to the Spit of Vasilievsky Island. Today’s bridge was built in 1916 on the site of the previous temporary one. Since the late 1990s, trams, or indeed horses, no longer ply the route across this bridge. 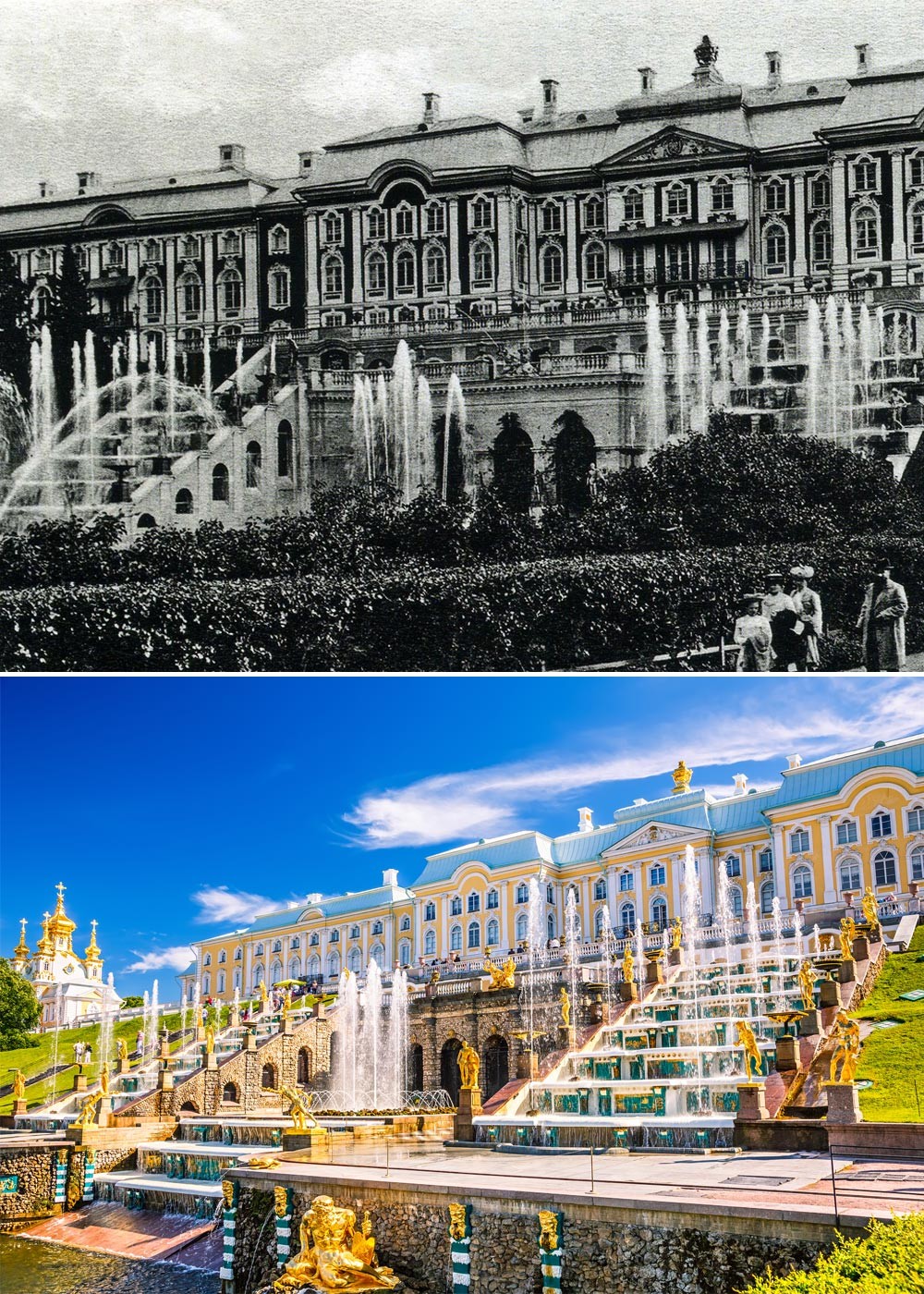 Tsars and tsarinas no longer stroll through the luxurious park of Peterhof, having been replaced by hordes of tourists. The palace and its fountains were badly damaged during the Nazi occupation, but restoration work began immediately after WWII. 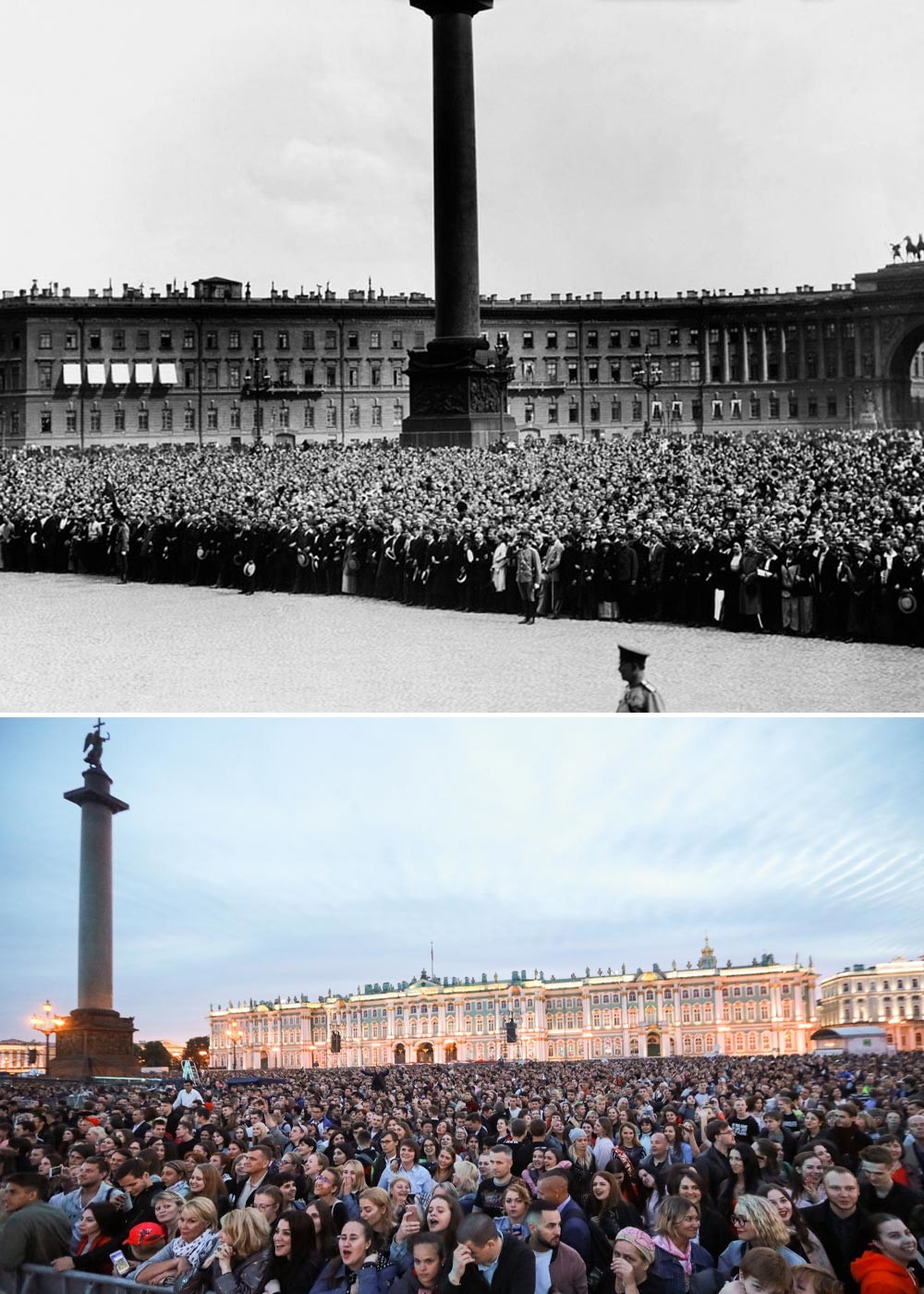 In 1914, overlooking the square in front of the Winter Palace, the tsar announced Russia's entry into WWI. Later it hosted revolutionary rallies, but in our time the gatherings have been more peaceful, mostly concerts. 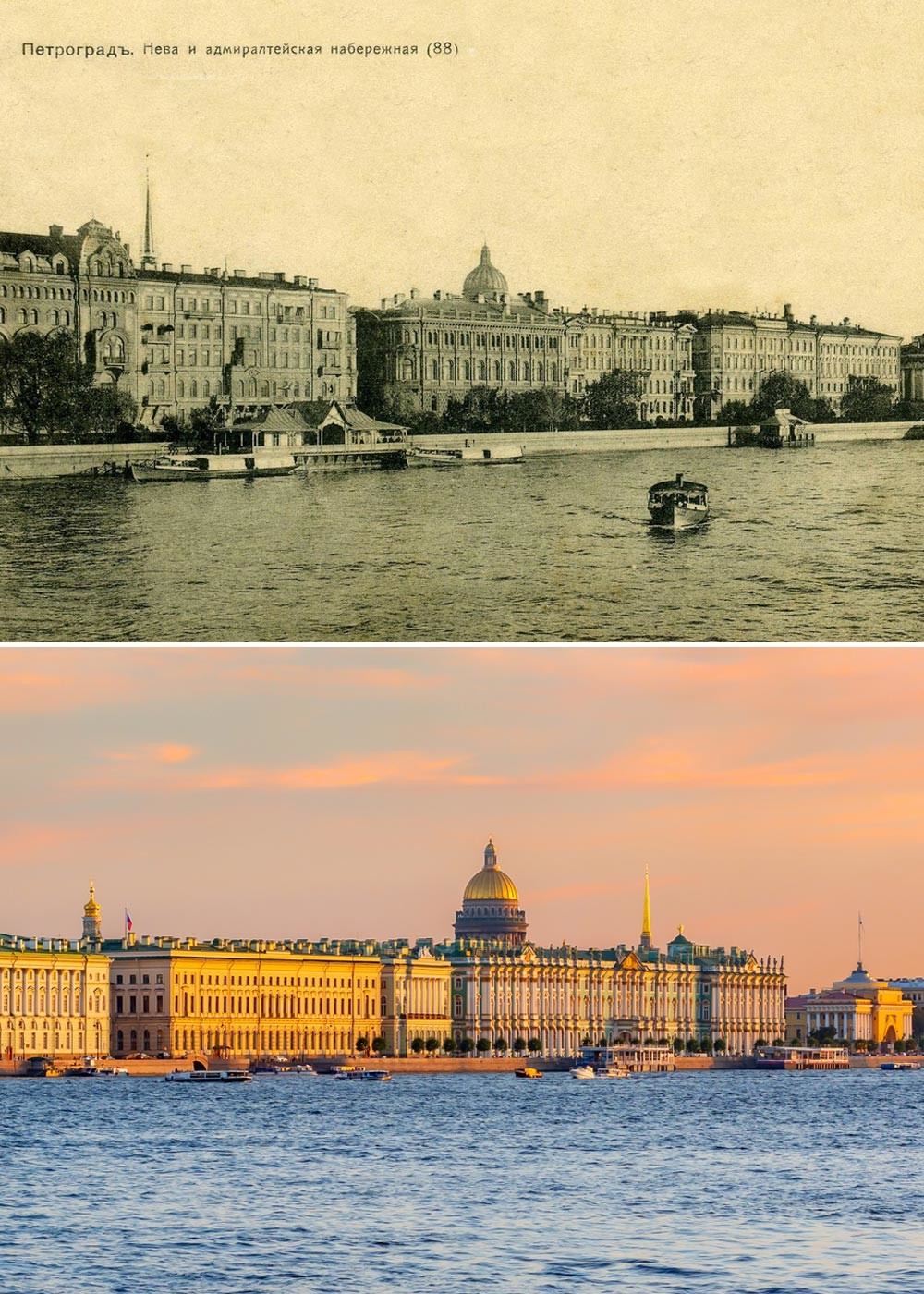 From this street on the left bank of the Neva, you can still see the dome of St. Isaac's Cathedral and, of course, the Admiralty spire. Only the different ships and boats give away the fact that one hundred years have passed. 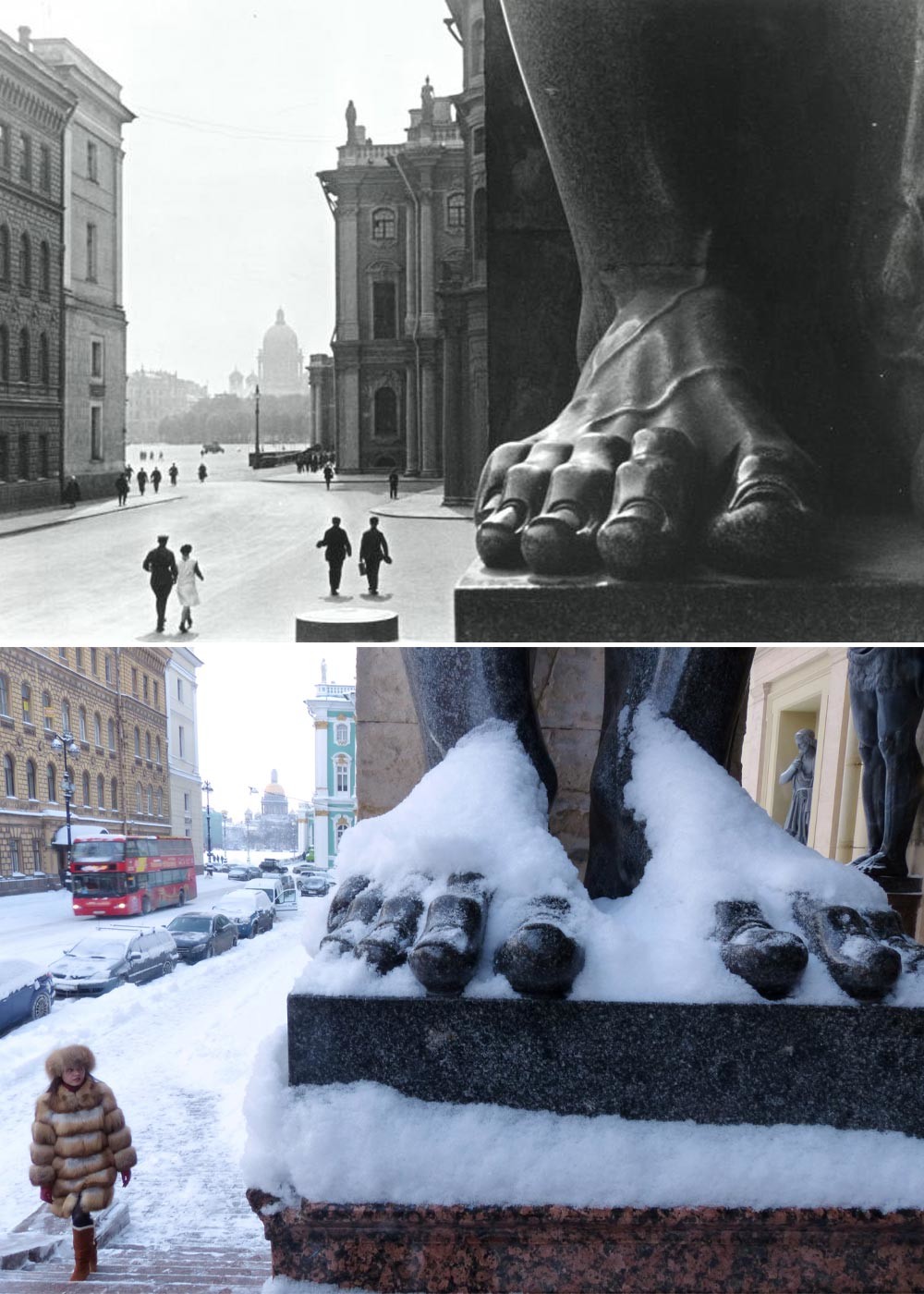 Powerful atlas sculptures hold up the roof of the entrance to the Hermitage Museum. Millionnaya Street, on the approach to the museum, was once a pedestrian area, but now cars and sightseeing buses whisk along it. 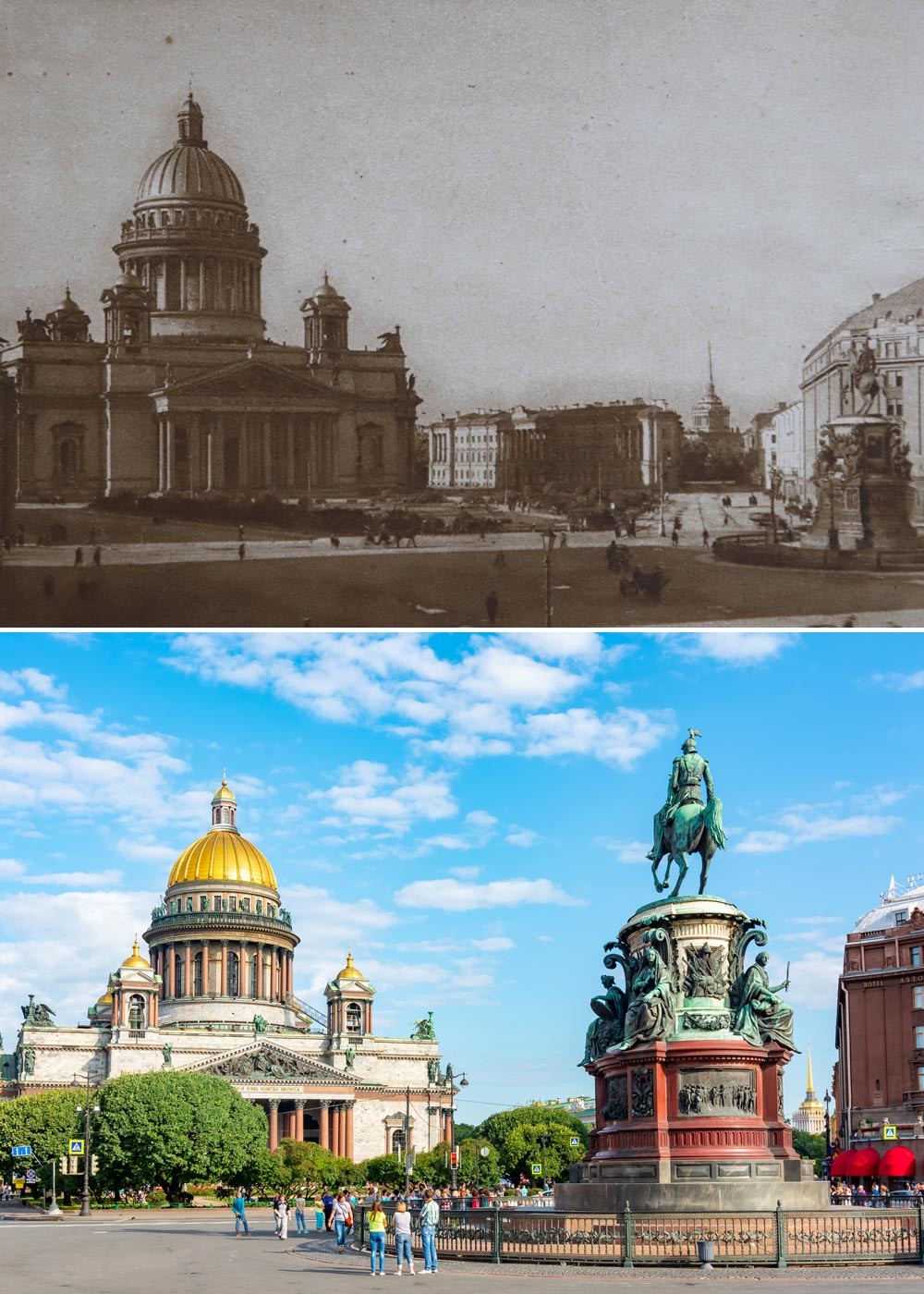 In the space of a hundred years, St. Petersburg has certainly acquired more vegetation — and cars. St. Isaac's, too, is surrounded by traffic these days. In Soviet times, thankfully, it was not knocked down, but turned into a museum (and used as a repository for valuables from other museums during the war). Miraculously, even the equestrian monument to Emperor Nicholas I survived. The Bolsheviks recognized its cultural value: only two of the horse’s legs are attached to the plinth, a rarity for that time. 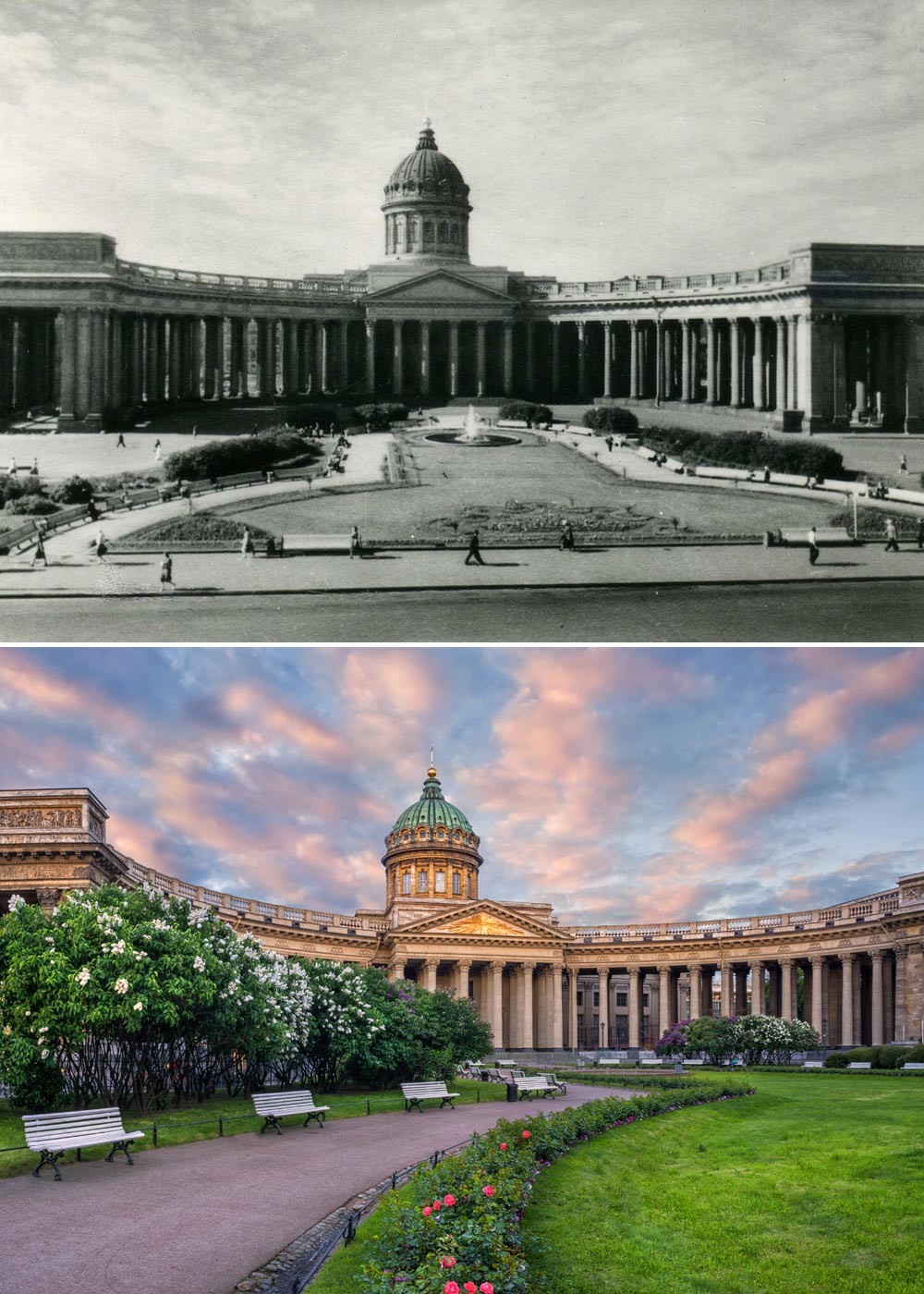 The colonnade of Kazan Cathedral is another St. Petersburg trademark. In Soviet times, it was used ironically to house the Museum of Religion and Atheism. Today, however, it is a working cathedral fronted by a beautiful square with flower garden, which greets tourists right on Nevsky Prospect. 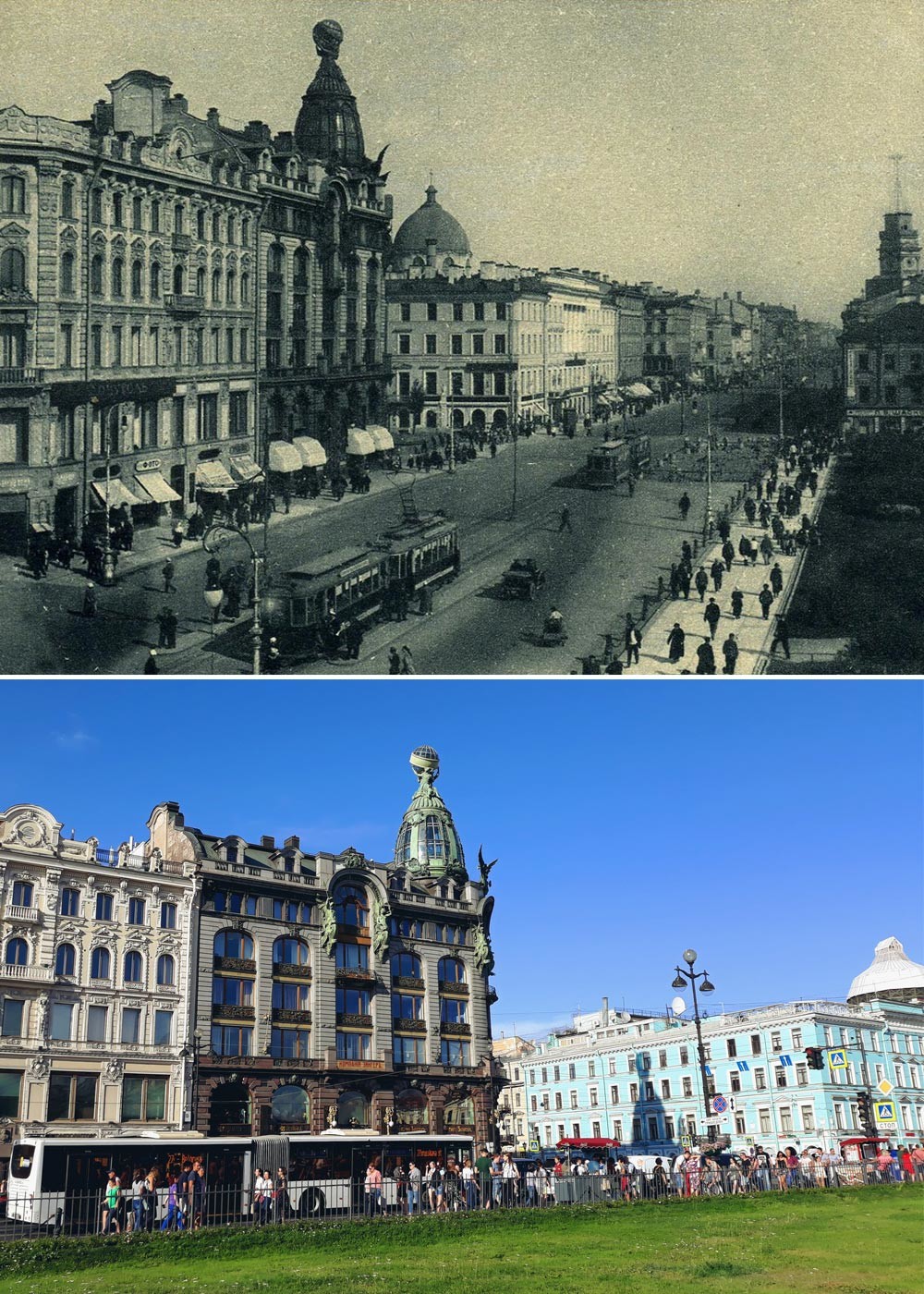 Nevsky Prospect is one long tourist attraction. In Soviet times, the street was named 25 October Prospect in honor of the date of the 1917 revolution. Every building on it is soaked in history. For example, the incredible Singer House, replete with Art Nouveau-style dome, was the home of the Singer company, and in Soviet times housed a Dom Knigi bookshop. 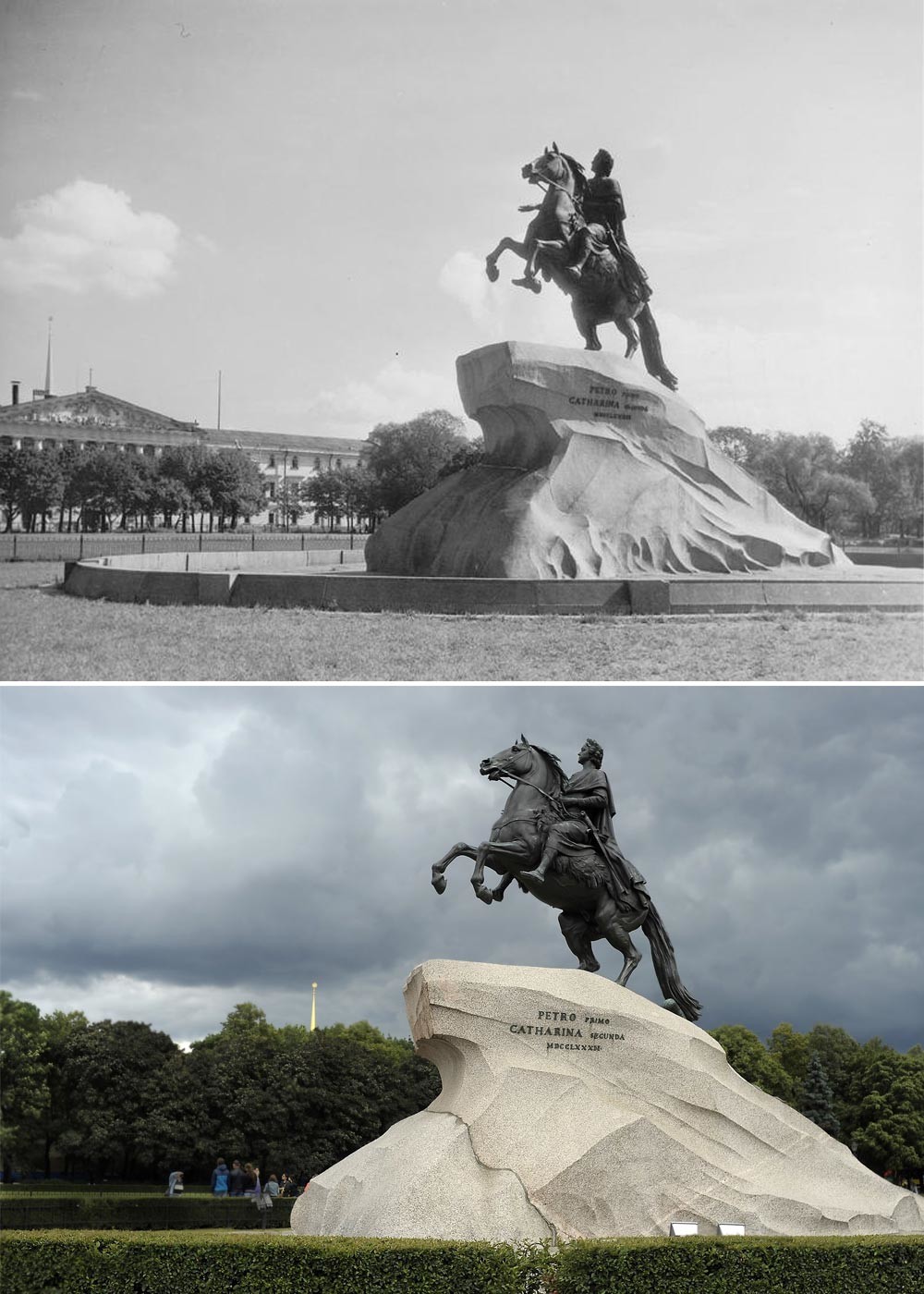 Trees have sprouted up around this famous monument to Peter the Great, which now block the view of the Admiralty from here in summer. But the spire can still be seen poking upwards. 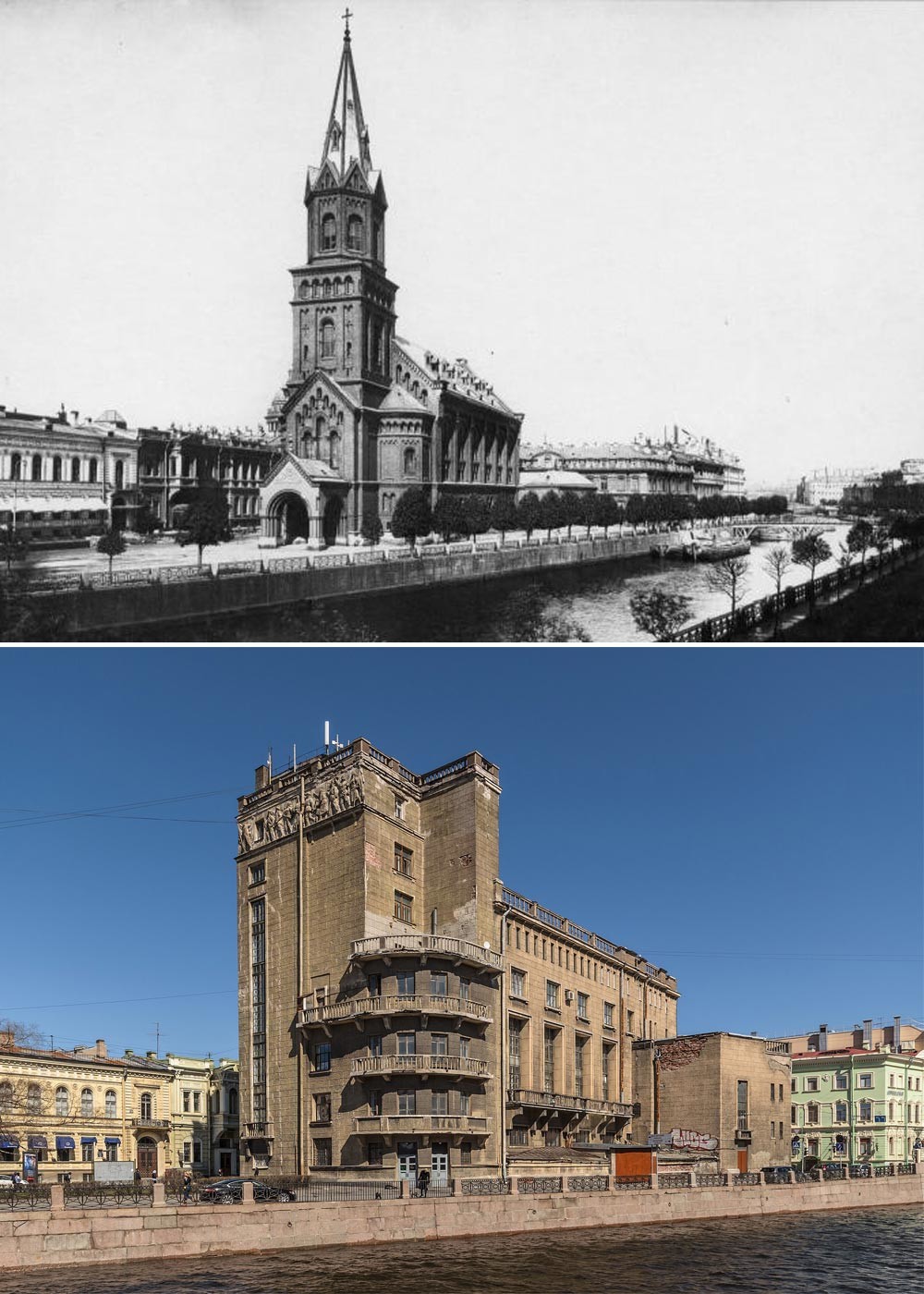 As we have seen, in general, St. Petersburg’s appearance has not changed too dramatically. But there are exceptions to the rule. For instance, the Soviets converted the German Reformed Church into a constructivist-style postal workers’ club... Nowadays it’s hard to even imagine that these buildings have something in common. 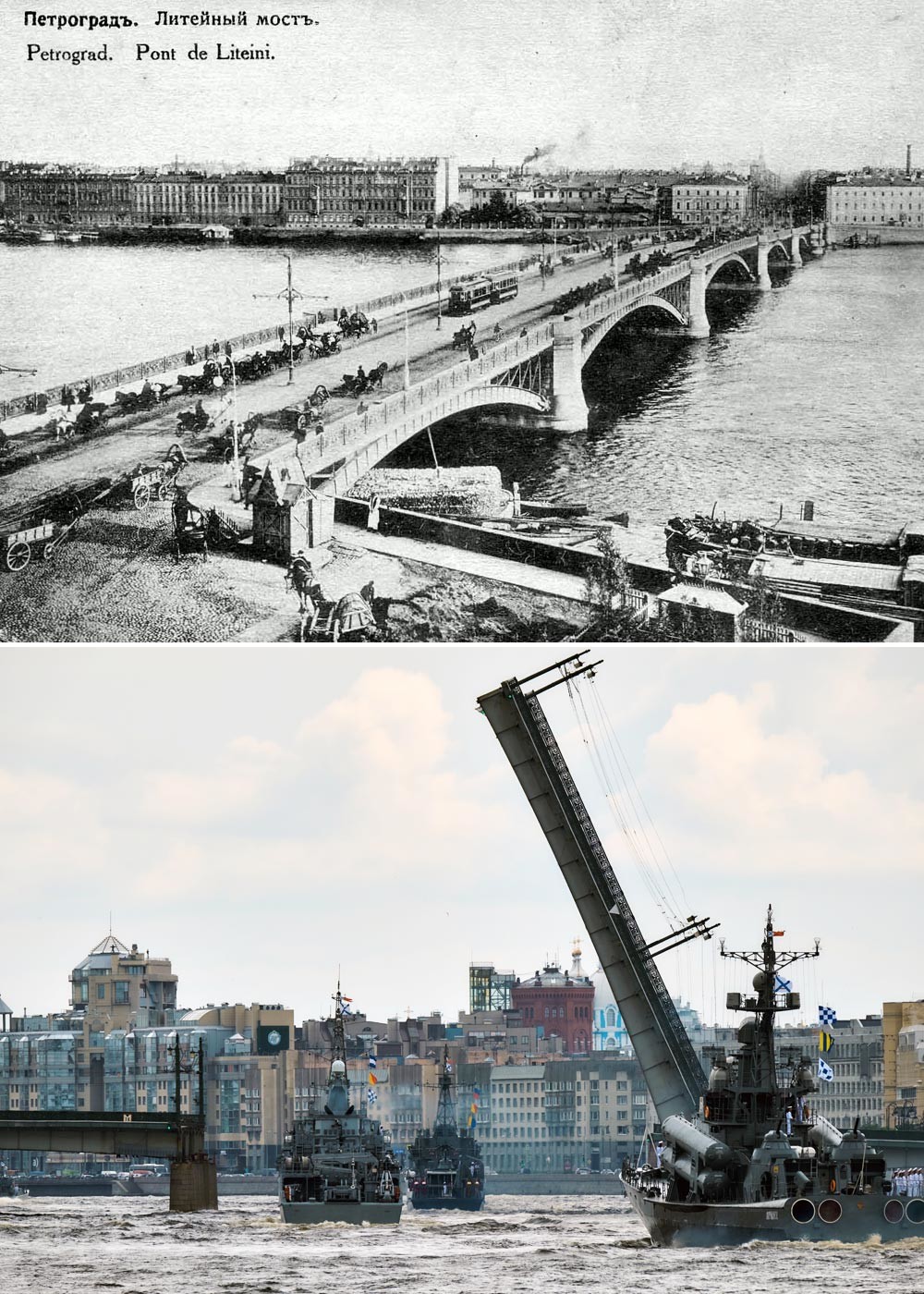 This bridge across the Neva was opened way back in 1879. It featured a complicated mechanism for opening the bridge... sideways! It underwent extensive reconstruction in the 1960s, and only after that did it become the familiar drawbridge of today.